Serie A 2018/19: A look at how Sassuolo are outperforming expectations

With four matchdays gone the top of the Serie A table already has a familiar look. Juventus sit in their now customary position at the top of the table with Napoli close behind in second. Perhaps with Fiorentina in third place, there is something of a change with the Tuscan side arguably performing above expectations. Behind them in fourth though sit Sassuolo who have impressed so far this season playing an exciting brand of football and outperforming the expectations that a club of their stature could have had going into the new season.

That Sassuolo are perhaps overperforming should come as no surprise as in 2016 they finished sixth in Serie A securing Europa League qualification. The 2017/18 season was then something of a transition year with coach Eusebio Di Francesco moving on to become coach of AS Roma and first Christian Bucchi and then Giuseppe Iachini being appointed as coach. In June 2018 the Sassuolo board turned to Benevento appointing their coach Roberto De Zerbi to take charge of the first team, an appointment that appears to be inspired.

There is a tendency when a club performs above expectations for their players and indeed their coaching staff to be coveted by other clubs who look for clues for the success of others and to take parts of that success to emulate it for themselves. Indeed, after leaving the club to join Roma Di Francesco led his new side to the Champions League semi-final. What people fail to take into account, however, is that sometimes a club is well run from above the coaching position with the recruitment of coaches and players handled well and a continuity plan in place. This may well be the case at Sassuolo with De Zerbi playing a style of football that is reminiscent of when Di Francesco was in charge.

If nothing else then the performances so far this season warrant closer inspection both from a tactical and from a recruitment point of view.

One of the most striking things that you will see when watching this Sassuolo side under De Zerbi is that they retain their compact shape both in the attacking and in the defensive phases of play. They very much work together as a single unit pressing high up the field to overload the opposition and prevent them from being able to play in quick transition.

This compactness in attack leads to a lot of situations where the man in possession of the ball has numerous passing lanes and angles with Sassuolo forming a number of ‘triangles’ to facilitate ball circulation and ensure that the man in possession always has at least two passing options in close proximity. 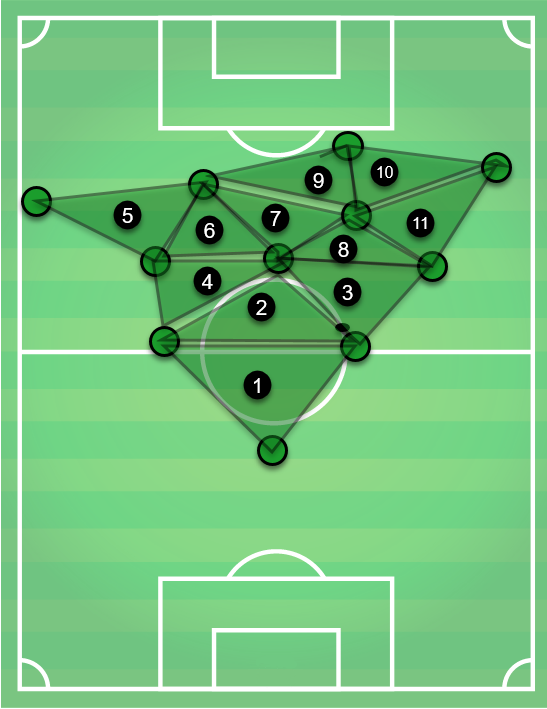 If you take in to account the goalkeeper at the base of the structure then in this typical attacking shape from Sassuolo has 11 triangles across the width and depth of the structure. The compact nature of the team from front to back means that they can quickly create overloads on either side of the field or in the central areas should the opposition defensive structure start to break down, the ball can also be moved quickly and safely in order to either rest in possession or keep the ball in order to move the opponent out of place.

The general focus for Sassuolo in attack is very central with the majority of their players being blocked in the central areas. The fullbacks do provide width in the attacking phase as both move high to the same line as the attacking midfielders and cover can be provided through the wide central midfielders moving out to cover passing lanes behind them.

These attacking structures are used by Sassuolo to quickly move the ball and penetrate through the centre or the wide areas. 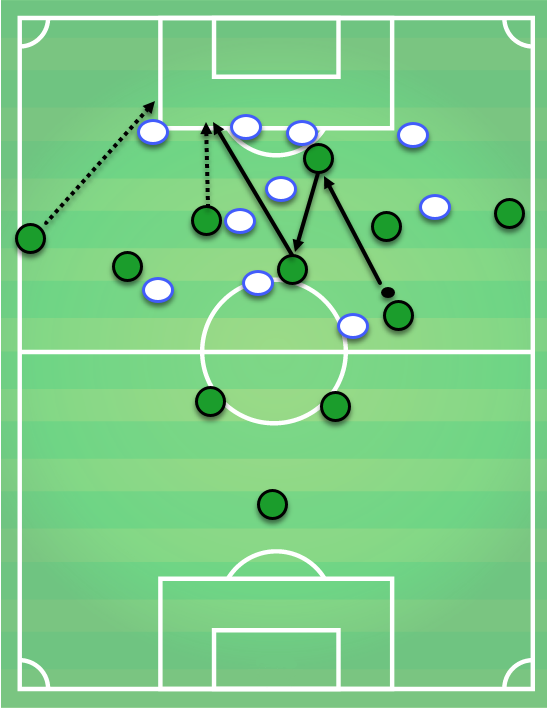 Here we see an example of Sassuolo using their compactness in the attacking phase to quickly combine in what is commonly known as an up, back and through movement. The ball is initially Played into the forward who bounces it straight back to a midfielder who then plays forward again on another angle. The speed of the passes and the angles leave the defensive line pinned in place with an attacking player making the vertical run to attack the space in the defensive line. With the addition of the supporting run by the wide player, the opposition fullback can be easily isolated.

Whilst the compactness can be useful when operating in the attacking phase the same can also be said of the defensive phase an in particular in the transition from attack to defence. If the opposition are able to win the ball back high up the field then Sassuolo are excellent at pressing quickly to disrupt the other side as they look to build into their own attacking phase. 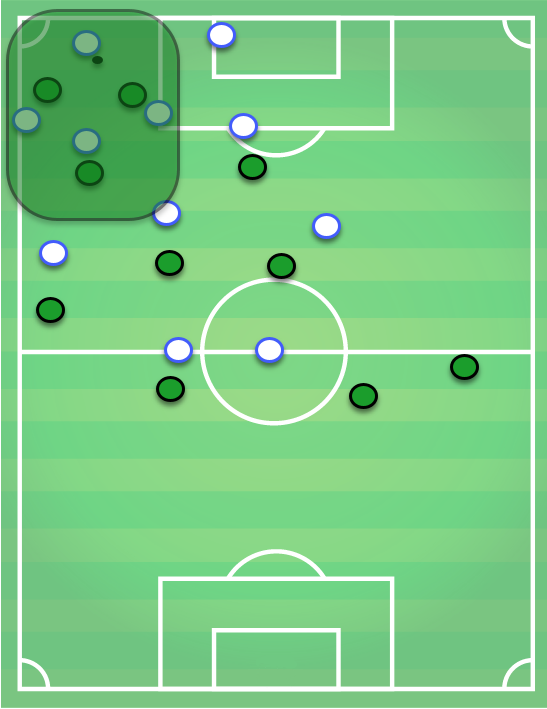 Here we have an example of this pressing movement in action. As the ball is lost in the corner of the field we see the Sassuolo players start to engage immediately and move to press the man in possession. While the opposition have a 4v3 advantage in the highlighted area of the field and the goalkeeper is clear to receive the ball we can see that beyond the initial press the other attacking options are marked closely as Sassuolo  move in to a man-marking structure to deny the opposition the opportunity to quickly play out of the press and launch an attack of their own. 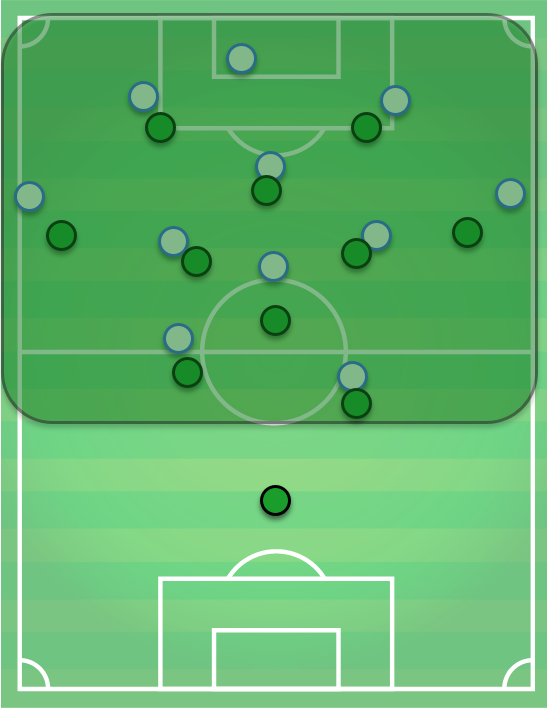 Here again we the Sassuolo press in a compact shape to man mark and deny the opposition space in which to play. With the ball at the feet of the opposition goalkeeper, the two central defenders split and a midfielder drops in centrally to offer an option to the goalkeeper. Normally this would result in at least one passing option being open. Instead, Sassuolo look to squeeze the space and take away any easy passing options that will allow the ball to be progressed forwards.

This leads in turn to the opposition looking to play direct from the back into areas where possession is not assured and Sassuolo are given an opportunity to win the ball back.

The tactical methodology of De Zerbi is only part of the story with the club as they have recruited well over the course of the summer transfer window with several signings that have not only added value to the squad but who also have the potential to be sold on in the future for a significant profit. This model of signing players with potential before giving them first team minutes and then selling them to bigger clubs is one that is familiar to those in Italian football with the likes of Udinese having thrived under this model in recent years.

The biggest expenditure for the summer was also the most intriguing signing with the son of former coach Eusebio Di Francesco, Federico Di Francesco joining from Bologna for a reported 10M. Di Francesco is nominally a winger or wide attacking player but for Sassuolo he plays in more of a narrow position partnering Domenico Berardi behind the loan forward. Not far behind the outlay on Di Francesco came the 9M that the club paid to sign the Senegalese forward Khouma Babacar from Fiorentina. Babacar is a more traditional number nine for club and country very much similar physically to Didier Drogba in his peak.

If Di Francesco and Babacar can continue to develop when given exposure to first team football then we can expect to see the club selling them on for a profit within the next one or two seasons.

Sassuolo are however also adept at operating at the other end of the market with players signed for free or for nominal fees who have perhaps failed to impress at their previous clubs. This summer saw Sassuolo access this part of the market again with the signing of the Ghanian international attacker Kevin Prince Boateng whose contract had expired at Eintracht Frankfurt.

Whilst it is fair to say that the eyes of the footballing world are intent on Italy anyway given the signing by Juventus of Cristiano Ronaldo from Real Madrid it is also true that Italy has far more to offer than just the top level clubs. Sassuolo are an example of a well-run club who adhere to a model in terms of their recruitment not just of players but also of coaches. This model may well see then retain their position at the top of the Serie A table as the season progresses and for many seasons to come.