Sampdoria produced a very good performance at Sassuolo on Saturday to earn an impressive 5-3 victory in Serie A. The scoreline will be the only disappointment for Marco Giampaolo’s men as they shouldn’t have conceded three goals in a game they were always in control of. This tactical analysis will look at Sampdoria’s pressing, the passing quality with which they carved Sassuolo open time and time again, and finally how Sassuolo looked to target the wide areas to hurt Sampdoria. 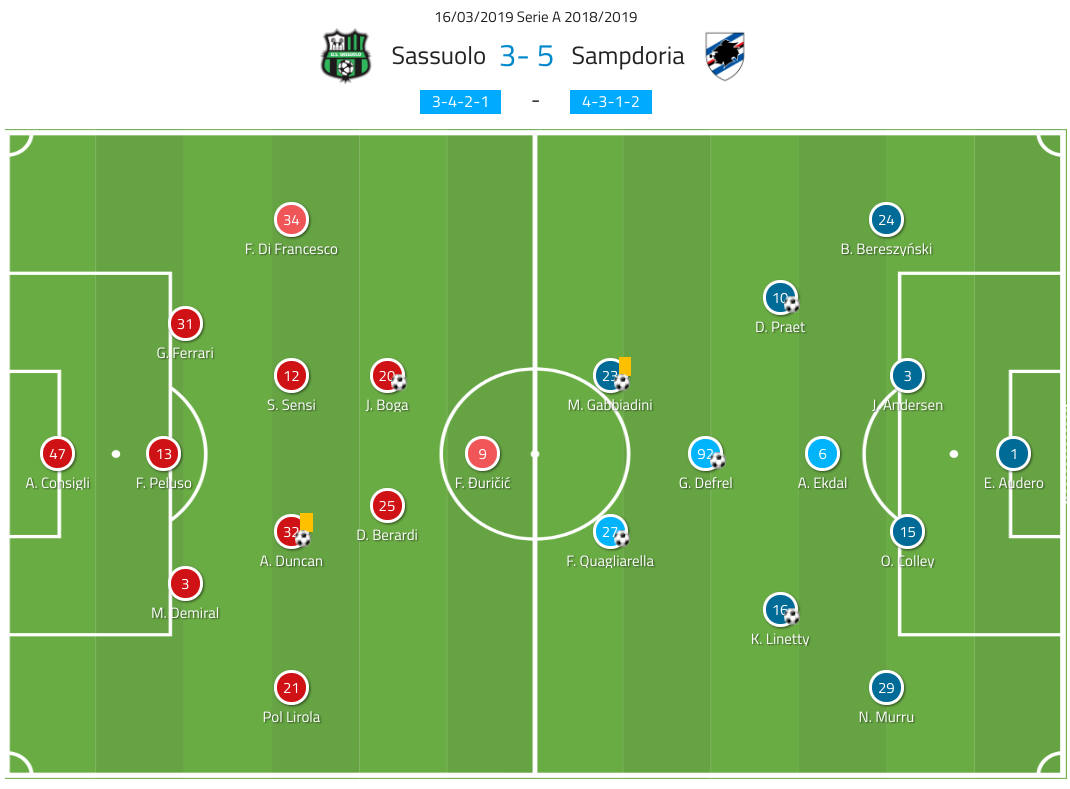 Sassuolo set up in a 3-4-2-1 in possession which in all honesty mostly resembled a 3-4-3, as Filip Djuricic dropped onto the same line as Jeremie Boga and Domenico Berardi but didn’t occupy a normal striker position. Defensively, Boga dropped into midfield to create a 5-3-2 defensive shape. In the second half, with Sassuolo 3-1 down, Roberto De Zerbi introduced Manuel Locatelli and Khouma Babacar in place of Federico Di Francesco and Djuricic to change the shape into a 4-3-3. The results of this change will be looked at later.

Sampdoria continued with the 4-3-1-2 they always use under Marco Giampaolo. His deployment of Gregoire Defrel as the number 10 would prove inspired as Defrel’s ability to run with the ball in central areas became a vital weapon in this game.

We’ve written extensively on Sampdoria’s style of play here at TFA, so you should be familiar with the basic patterns of their football. By this, I mean the short passing combinations they use to progress the ball, the way they manipulate opponents to press them before playing right through the opponent’s shape and the deep runs made by the strikers. All these principles were evident in the way they dismantled Sassuolo.

In the first half, Sassuolo defended quite solidly in their 5-3-2 and the occasions when Samp managed to get the ball cleanly in between the lines were few. In the second half, however, Sassulo changed to a 4-3-3 and tried to press Samp high. Samp duly made them pay for a poorly set up press.

The sequence below first highlights Sassuolo pressing Samp high up the pitch. The two central midfielders Alfred Duncan and Locatelli join Babacar in the first pressing line. Samp’s goalkeeper Emil Audero spots Karol Linetty in midfield and plays the ball to him. Berardi’s defensive position (yellow) is poor and Linetty turns away from him. 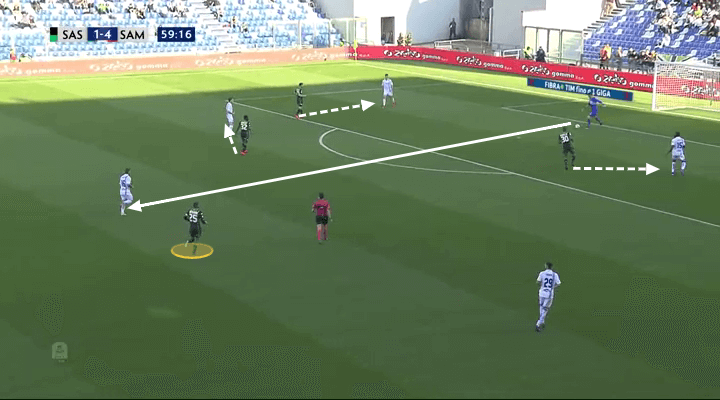 This forces defensive midfielder Sensi (yellow) to step up to press the Polish midfielder (white). He easily slides the ball past the Italian into Defrel (pink) who has oceans of space as Sassuolo are forced to defend a 3v3. 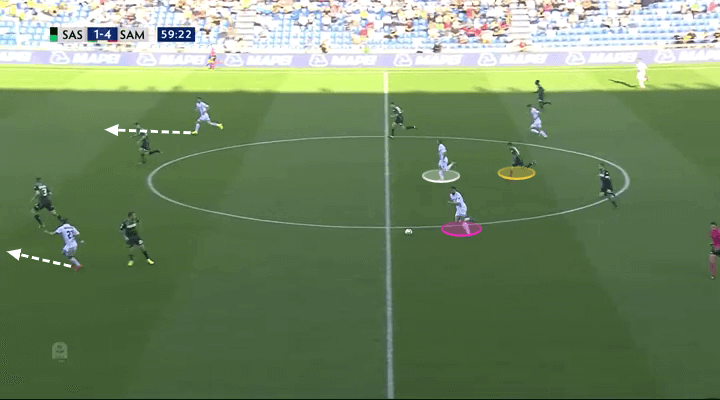 The below image is another occasion when Samp simply played right through Sassuolo. Duncan and Locatelli (both yellow) move high looking to press. Colley looks for Linetty in midfield, an area totally vacated by Sassuolo. Berardi is close to intercepting the pass but doesn’t, and Sensi is again alone as Linetty continues the attack into Defrel who can again run with the ball through the centre of the pitch. 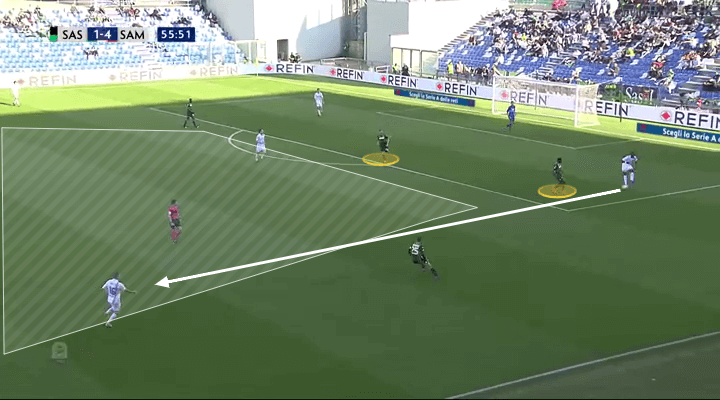 The image below highlights the poor organisation of Sassuolo’s three-man midfield. They are all highlighted in yellow, in a space of no more than seven metres from each other. Samp quickly play out of this area and Dennis Praet can find Defrel in space. 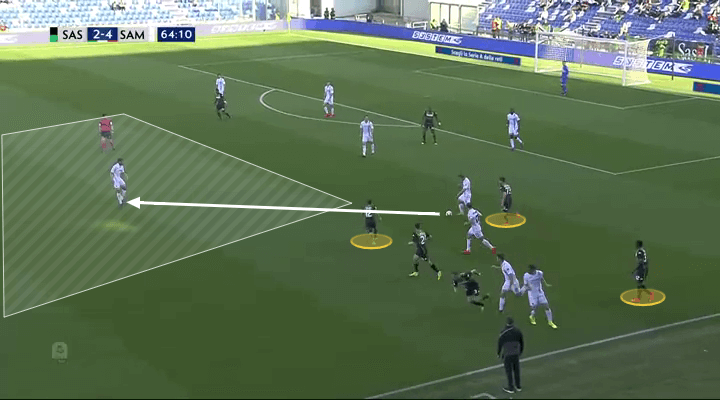 Sassuolo committed so many players forward when pressing that Samp sometimes chose to bypass the press with a lofted pass to either striker. Here Manolo Gabbiadini lays it off to Defrel and Samp can attack in a 3v3 from the halfway line. They found different solutions to overcome Sassuolo’s press and picked them apart in the second half. 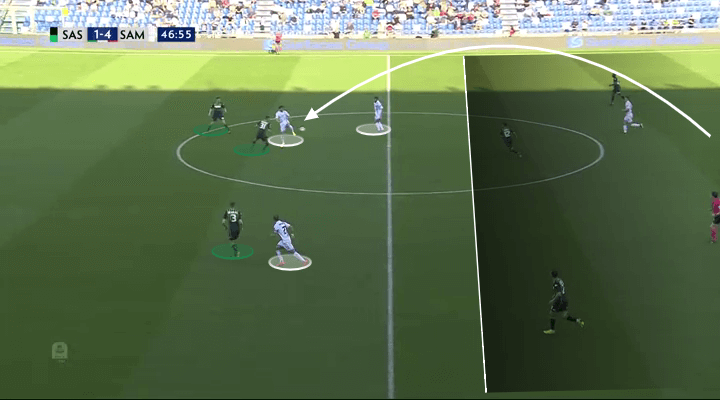 The below image highlights the seconds before Fabio Quagliarella made it 2-0. Federico Peluso tries to find Duncan in midfield but the excellent Linetty steps in and steals the ball. He then unleashes the three Samp attackers on the counter-attack against three Sassuolo defenders. 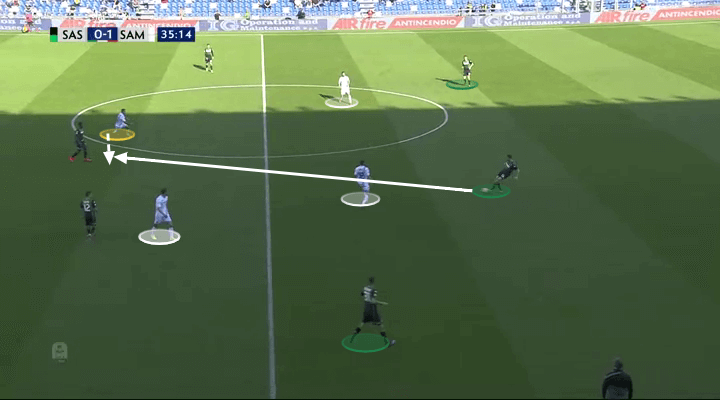 Sampdoria’s compact shape makes it difficult to play through the centre and Sassuolo rarely did. However, Samp are also superb at quickly overloading the wide areas thanks to the energy of their full-backs and outer central midfielders Linetty and Praet. In the image below, they’ve overloaded the area to force Sassuolo into a long ball down the line which is easily defended. 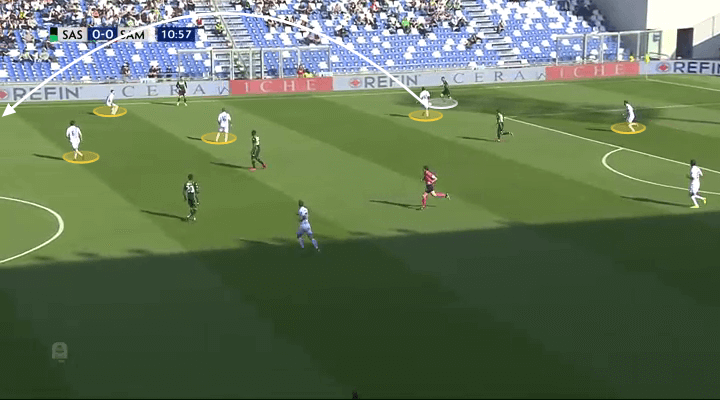 The image below is another example and highlights how the front three work together to stop central progression from the defence. Linetty (white) also supports the press and removes the easy option of Duncan in midfield. 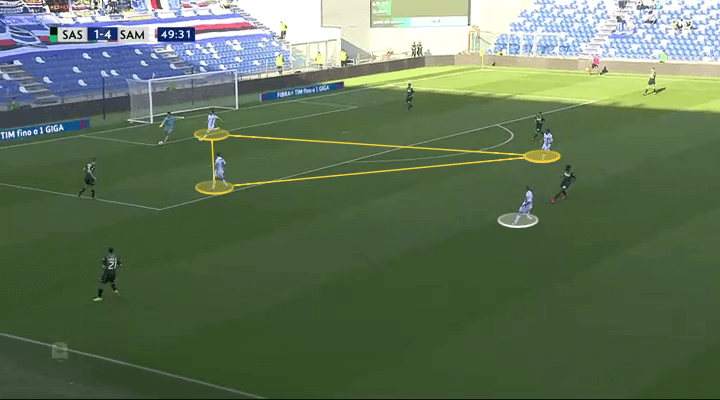 I must also take the time to praise the positional and anticipating work of the Sampdoria back four. As they overloaded the wide areas to force Sassuolo into longer balls, this meant the back four needed to be alert to balls in behind. This is something Sampdoria defend brilliantly.

Look at the body position of the defenders below. They are all ready to drop if needed and they keep a perfect defensive line. That positioning, combined with the staggered diamond in midfield, made it really difficult for Sassuolo to progress attacks as they wanted. 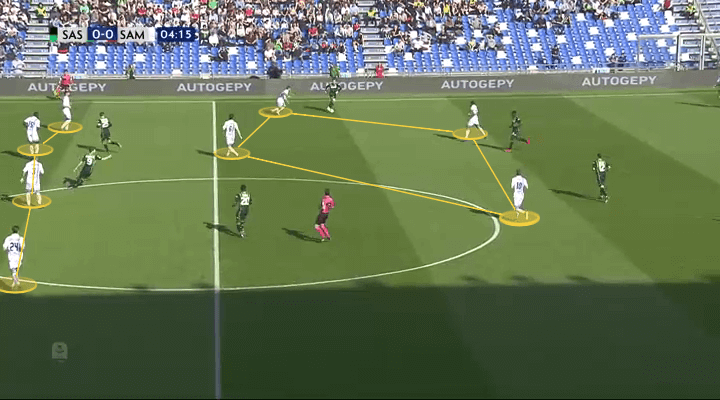 Sassuolo use width to hurt Samp

Sassuolo did have some good moments in the game though. The below image highlights one of the few times when they managed to find space centrally as Berardi occupies the half-space and receives from Duncan. This was Sassuolo’s plan; to have the wing-backs provide full width while Boga and Berardi combined with Djuricic between the lines. 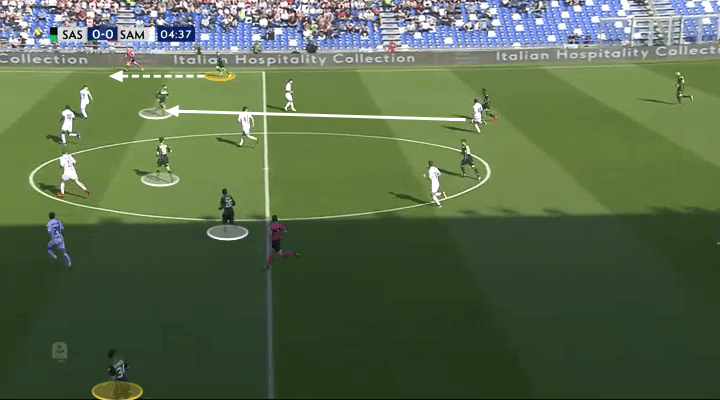 With Sampdoria’s very narrow shape, it made sense for De Zerbi to target the wide areas. This proved successful for Sassuolo’s first goal. On this occasion, Sassuolo managed to win a second ball in midfield and Sensi found Berardi in space. The Italian then used the run of Pol Lirola on the right to advance before playing the Spaniard in down the line, who sent the ball across for Boga to tap home. 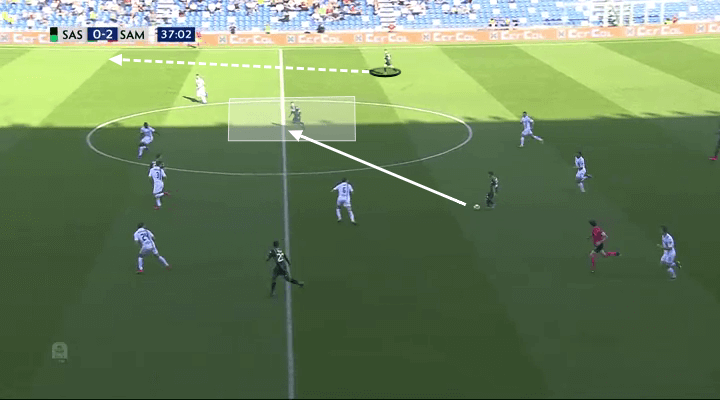 Most of Sassuolo’s attempted attacking play in the first half came from the right where they consistently looked for switches into Lirola. Below we see Boga spraying the ball wide to Lirola in plenty of space. 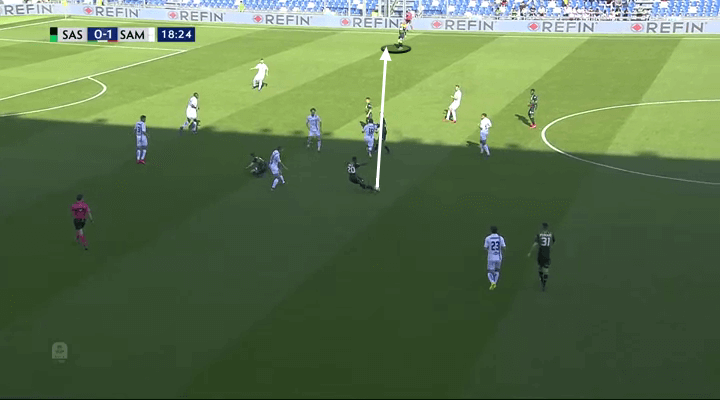 This last image again highlights Lirola attacking the wide area as Di Francesco looks to play him in but mishits the pass. 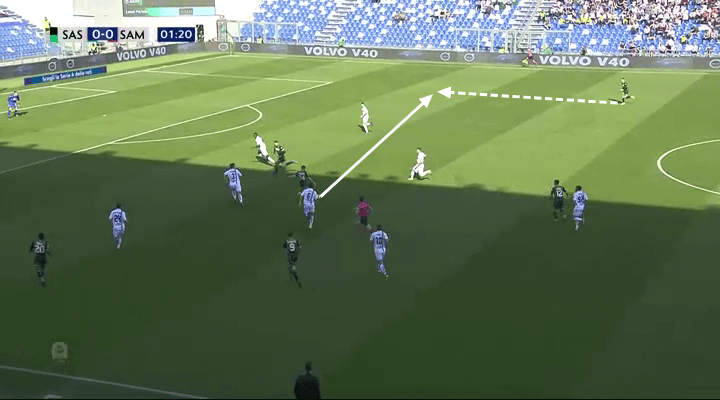 This was a good plan, but Nicola Murru was excellent at getting out quickly and stopping Lirola. Linetty also gave him good help in closing down that space when Sassuolo switched sides. Still, Sassuolo managed to create most of their chances from this tactic.

Sampdoria were always in control of this contest and their five goals highlight how effective and dangerous their attacking play was. They’ll be disappointed to have conceded three goals despite generally defending really well.

For Sassuolo, it was worrying to see how poorly their pressing was set up in the second half and how Samp really exploited that. Both teams will go again as their two interesting coaches continue to make names for themselves in Serie A.