Norwich City extended their winning run to six games as they overcame relegation threatened Rotherham United 2-1 on Saturday. Strikes from Kenny McLean and Ben Godfrey either side of an equaliser from Semi Ajayi were enough to see the Canaries through in South Yorkshire.

McLean timed a run from deep well to nip in ahead of Millers keeper Marek Rodak to put Norwich in the lead on 45 minutes. But a long range strike from Ajayi – his sixth in five games – gave the hosts hope of an unlikely draw in their battle against relegation.

Five minutes later, however, the Canaries found the winner through defender Ben Godfrey. He found space at the back post to nod home to cap off a week in which he received a call up to the England under-20 squad.

The result sees Norwich go four points clear at the top of the Championship after the drama between Leeds and Sheffield United earlier that day. Rotherham, meanwhile, remain in the relegation zone a point from safety.

Both sides went with their expected formations for this match. Rotherham went with their 4-1-4-1 set up, with Semi Ajayi anchoring in midfield. Michael Smith had the unenviable task of the lone frontman, spending his afternoon battling for balls.

Ajayi was particularly impactful in midfield. Rotherham’s goalscorer followed on from scoring a brace – including an added time winner – on Tuesday night to put in an emphatic display which also included four tackles, the most out of any Rotherham player. 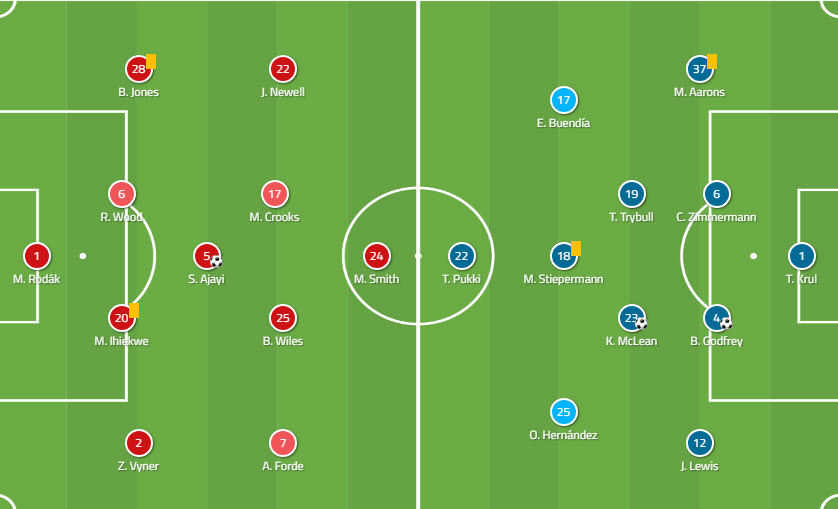 Norwich deployed their 4-2-3-1 system which has served them excellently this season. While they struggled initially to break down the Millers, they eventually began to have some joy as we will see later on in this analysis.

With a goal and an assist, Kenny McLean put on a superb display in the centre of midfield. Alongside his contributions to the scoreline, the Scotsman also won three aerial duels and made four tackles. It was a man-of-the-match display from the Norwich midfielder.

As expected, Rotherham went with their compact 4-1-4-1 shape, looking to shut down Norwich and their passing play. For much of the first half, this worked very well. Below, we can see the solid shape they set out in. 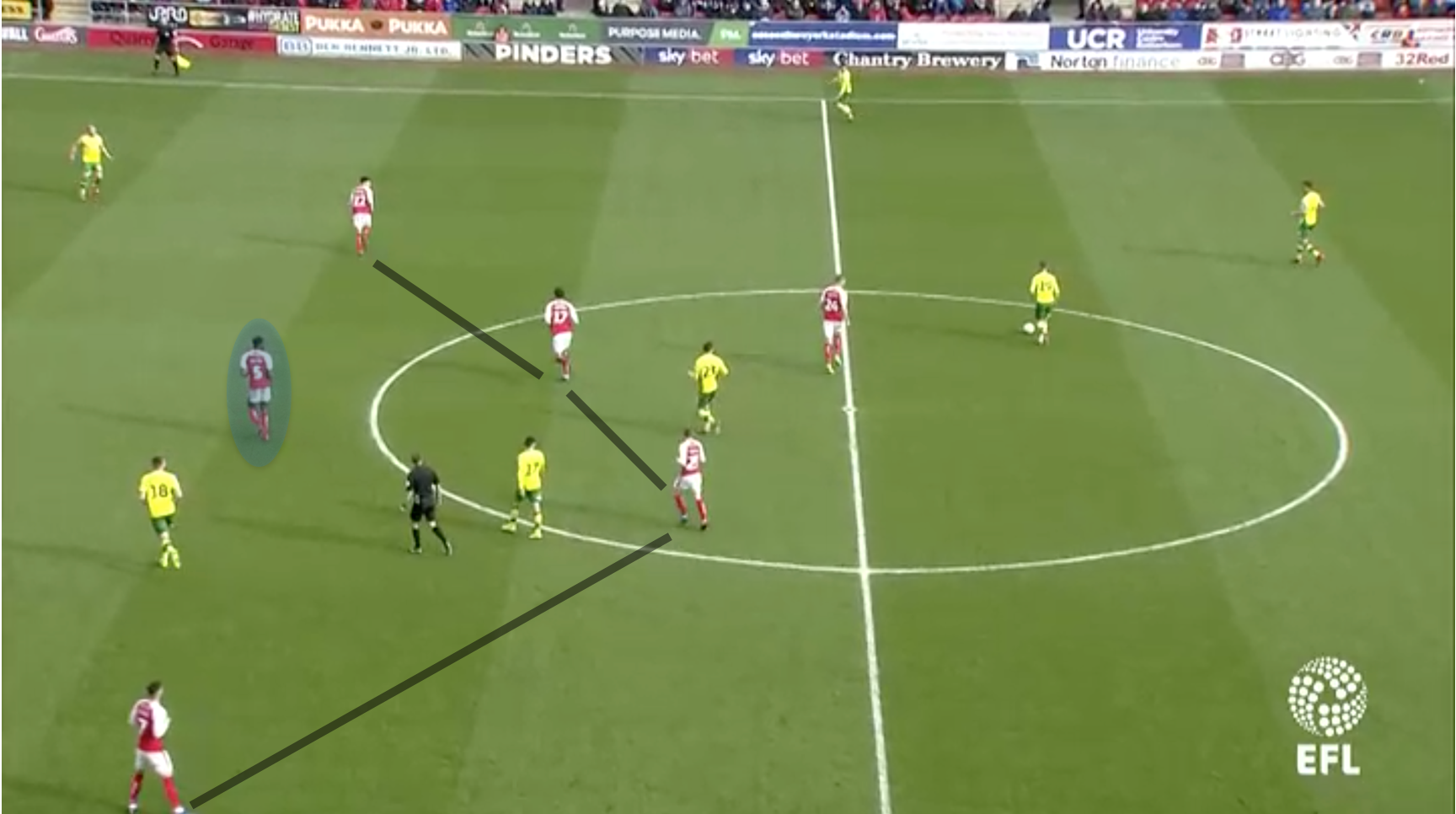 There were also several key actions that the Millers performed to keep the Canaries at bay. One of these was the tracking of Marco Stiepermann, a task taken on by Ajayi. The Nigerian international doggedly pursued the German into his own half at times, limiting his influence on the game. 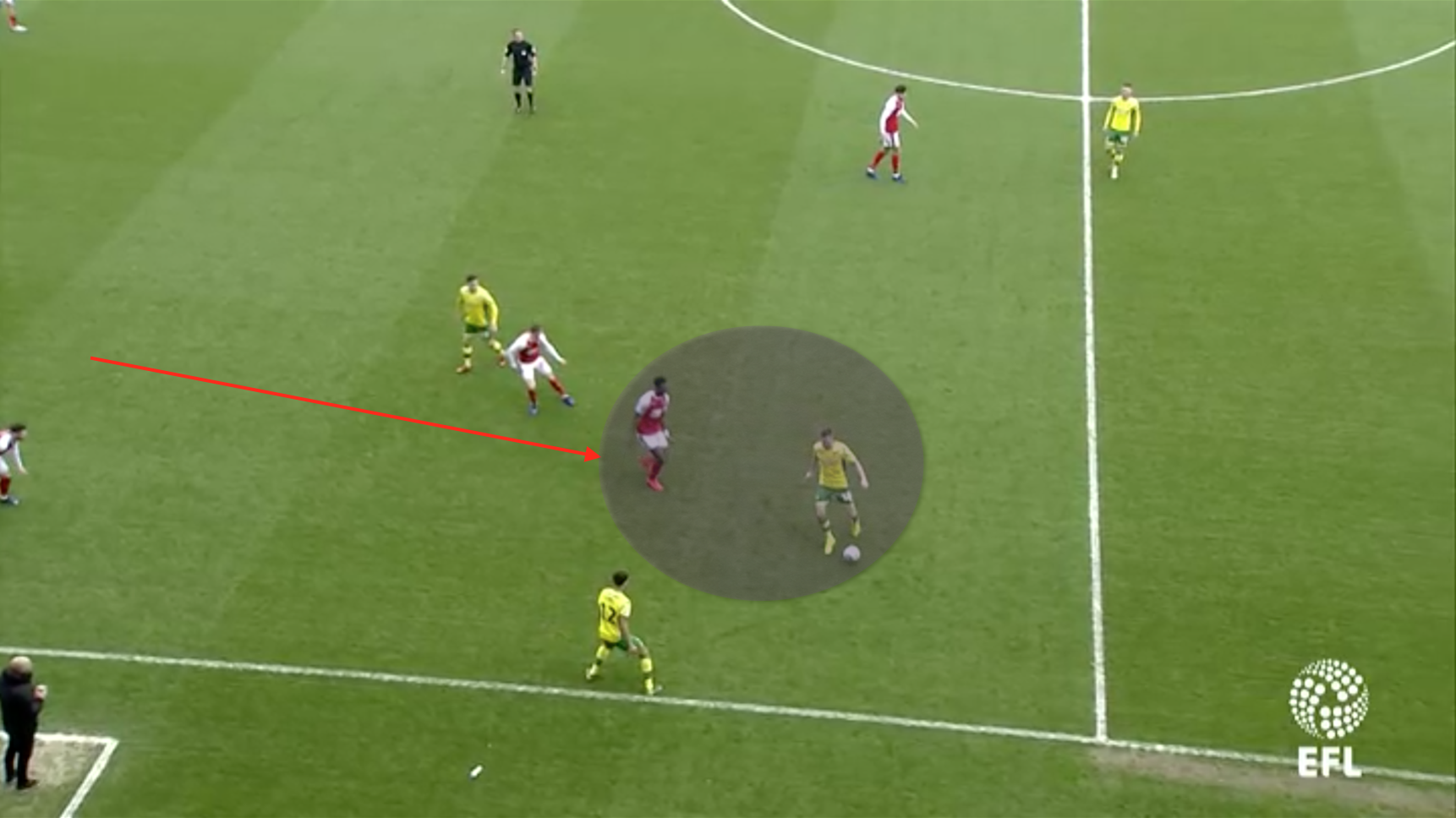 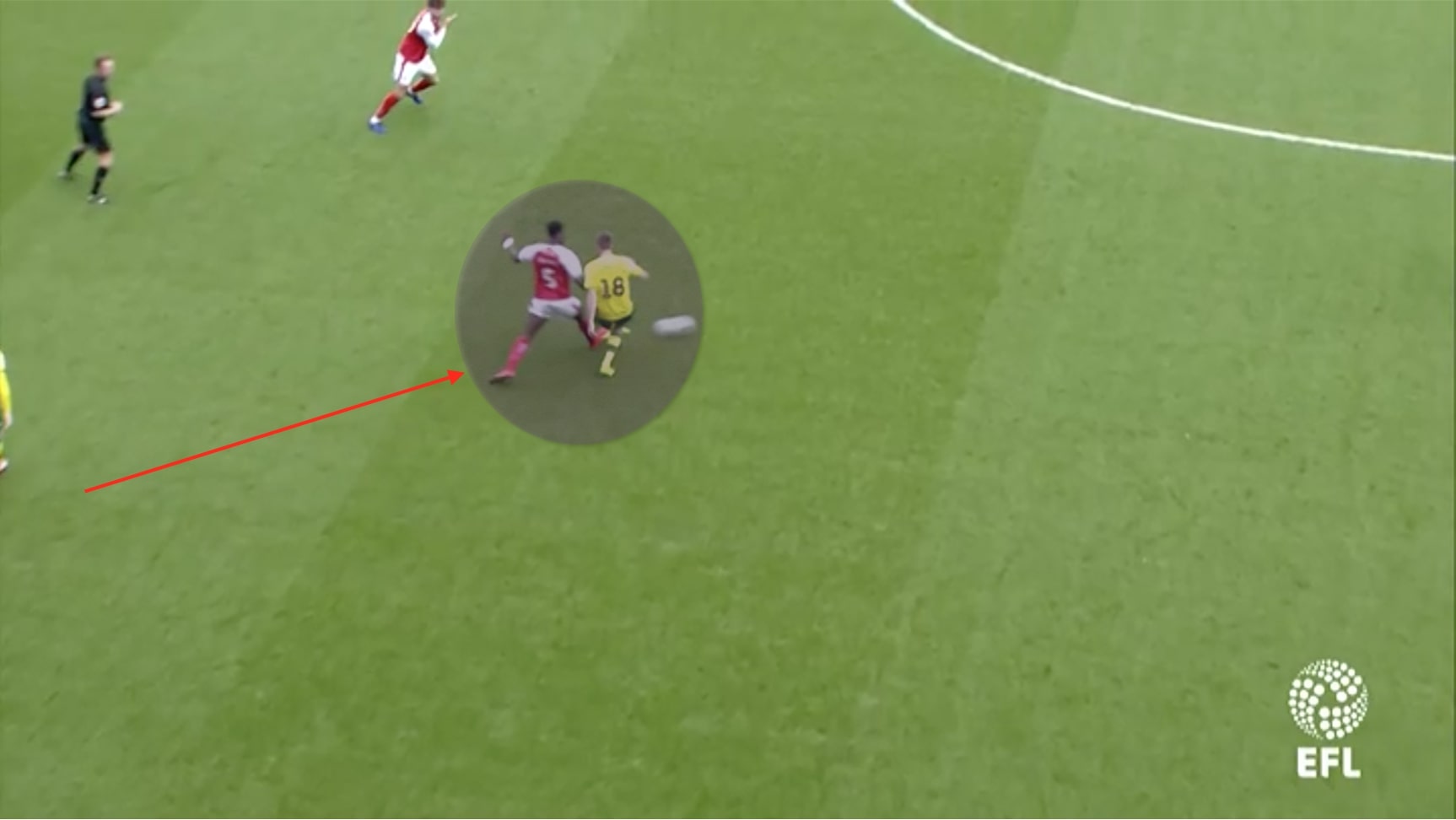 While Rotherham generally waited for Norwich to get to the halfway line before pressing, they did counter-press when they lost possession in attack. This was to shut down any chance of a Norwich counter-attack catching them out while they were low on defensive numbers. This included tactical fouling deep in the opposition half, as can be seen below. 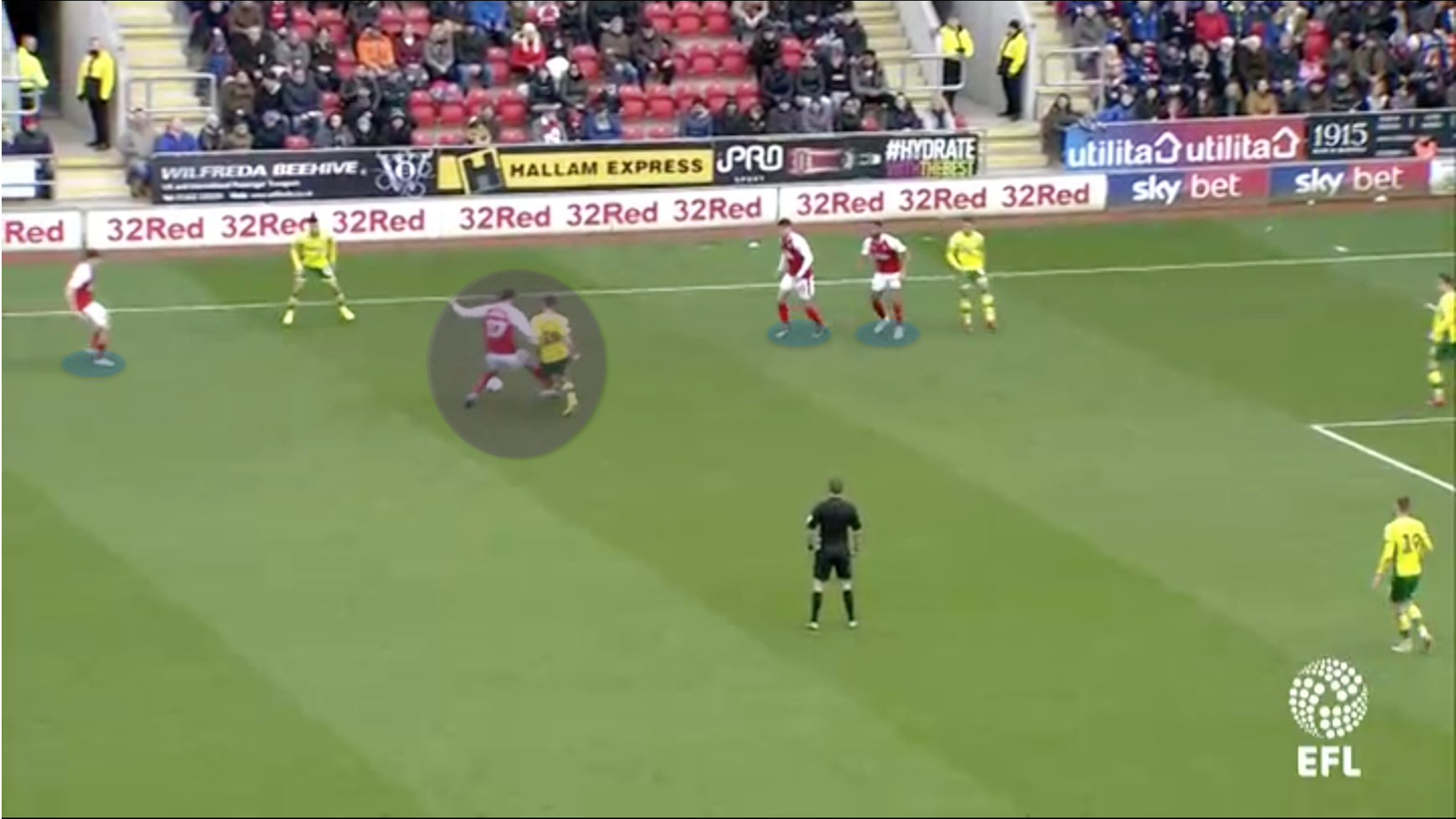 These fouls are a clever way to stop an opposition build up. They appear relatively harmless to the referee as they are not in dangerous positions, so a yellow card or further sanction is unlikely.

The Millers used their compact shape to shepherd Norwich towards wide areas. At this point, they would start an intense press to dispossess the man on the ball. This was often successful, such as in the example below, due to the Norwich player having limited options out wide and being surrounded by red shirts. 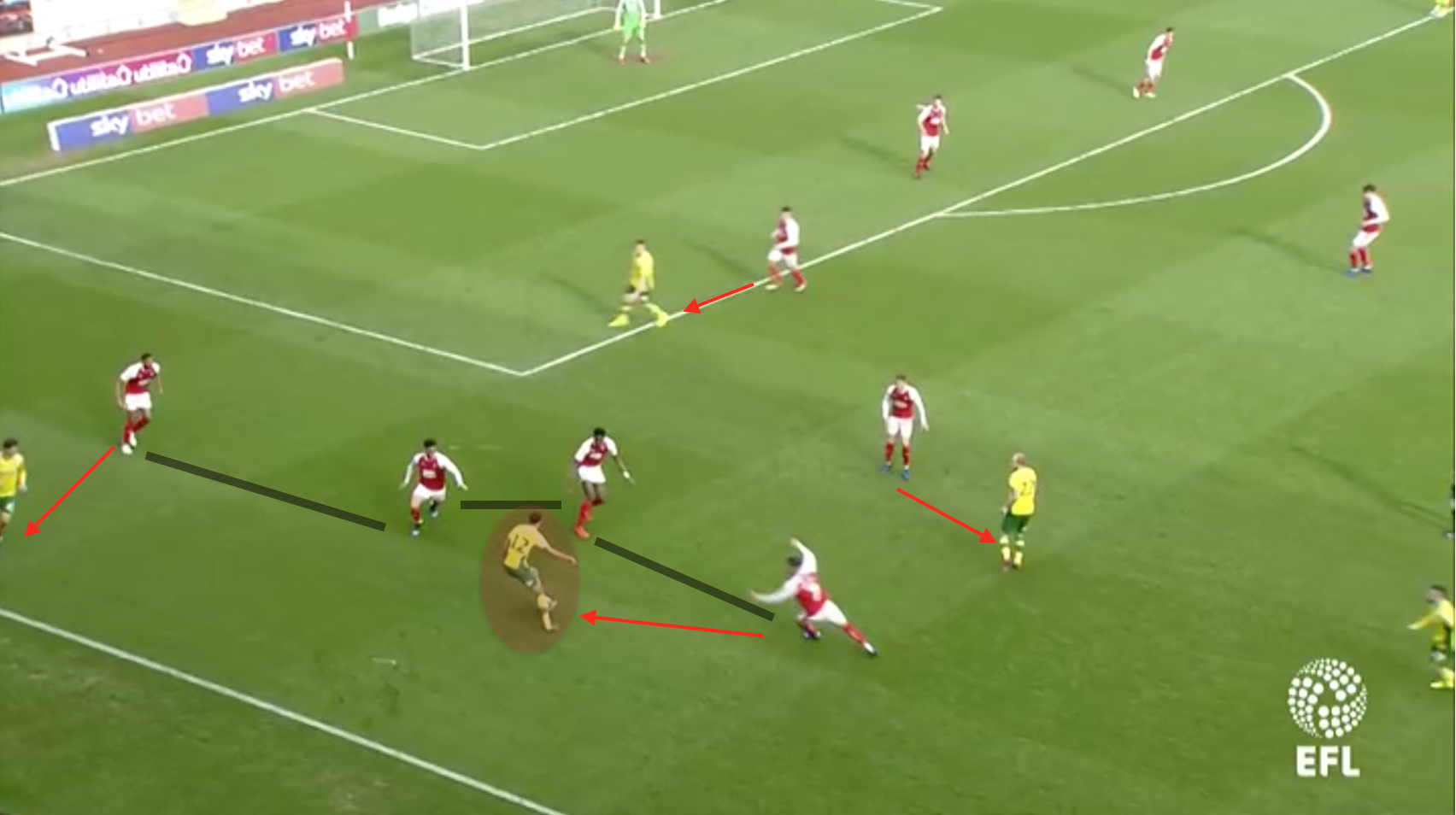 Some space was found, though, through switches of play. With Rotherham committing men to regaining the ball in wide areas, particular on Norwich’s left flank, a switch of play became a way to bypass this. Below, we can see a cross-field ball finding right-back Max Aarons in space. 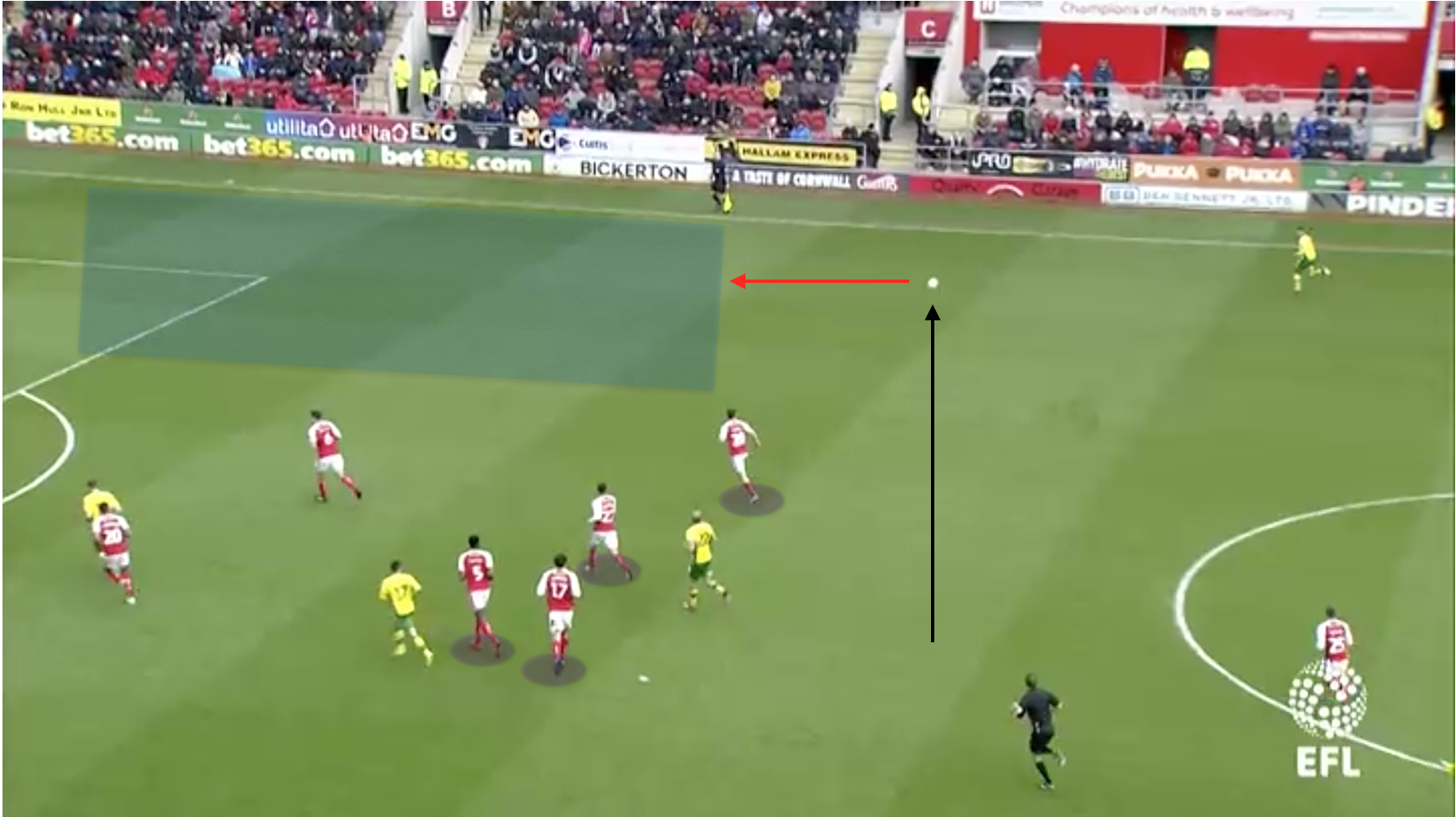 The numbers Rotherham had in defence, however, made it difficult for Norwich to completely capitalise on these switches. The Canaries needed to shift Rotherham’s defenders around more, which they eventually managed to do.

We can see this move into the half space from Marco Stiepermann created room for Aarons to burst into down the flank. It was Norwich’s first meaningful attacking moment of the game. 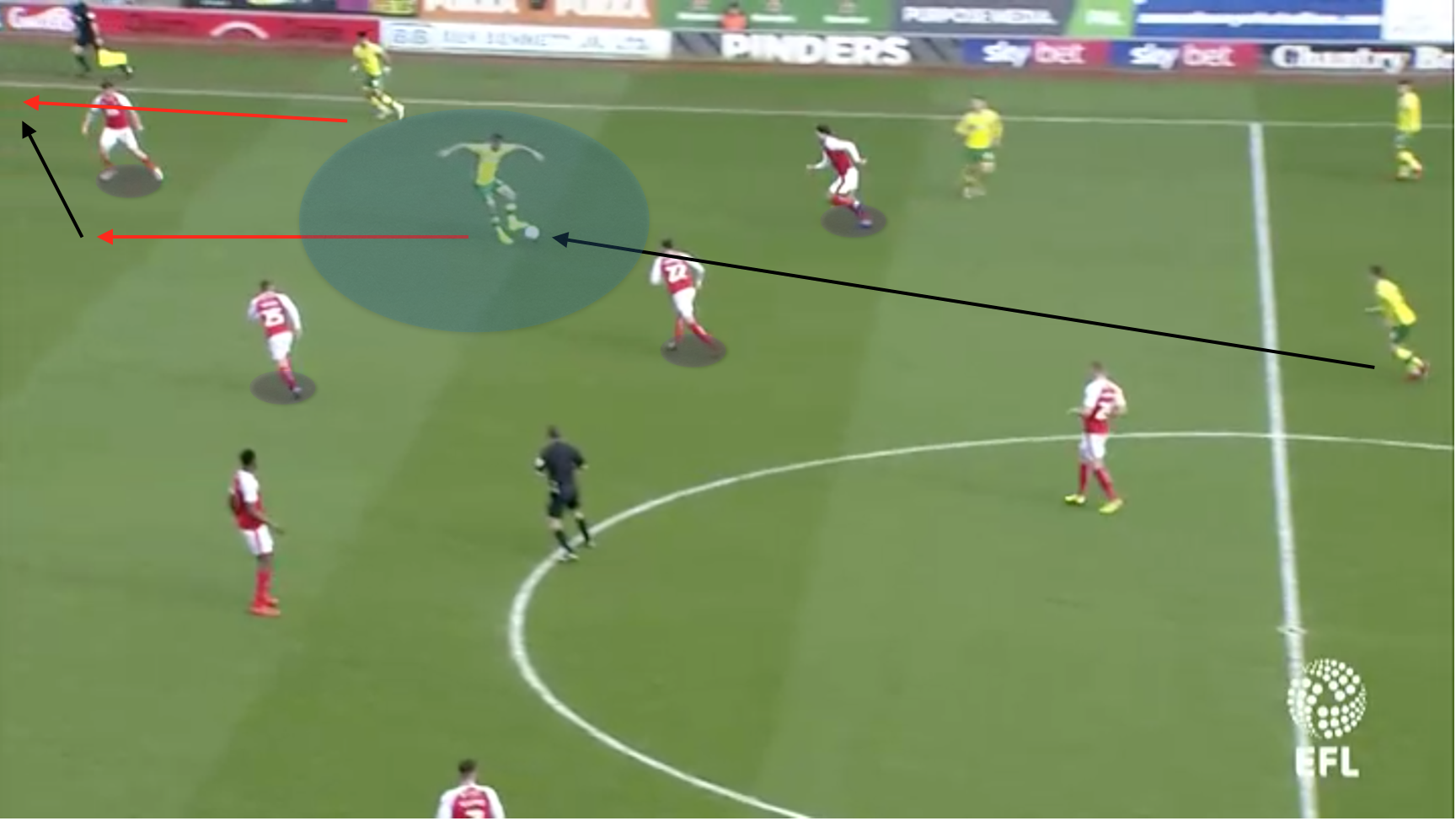 Shifting the solid Millers’ defence out of line would prove to be key soon after. Teemu Pukki, who has nine assists alongside his 24 goals this season, made a fantastic false nine manoeuvre to help Norwich find the opener.

His run to drop deep created space for Kenny McLean to move into, having drawn out defender Michael Ihiekwe. The Finnish frontman then played a lovely ball round the corner to put McLean in for his goal. 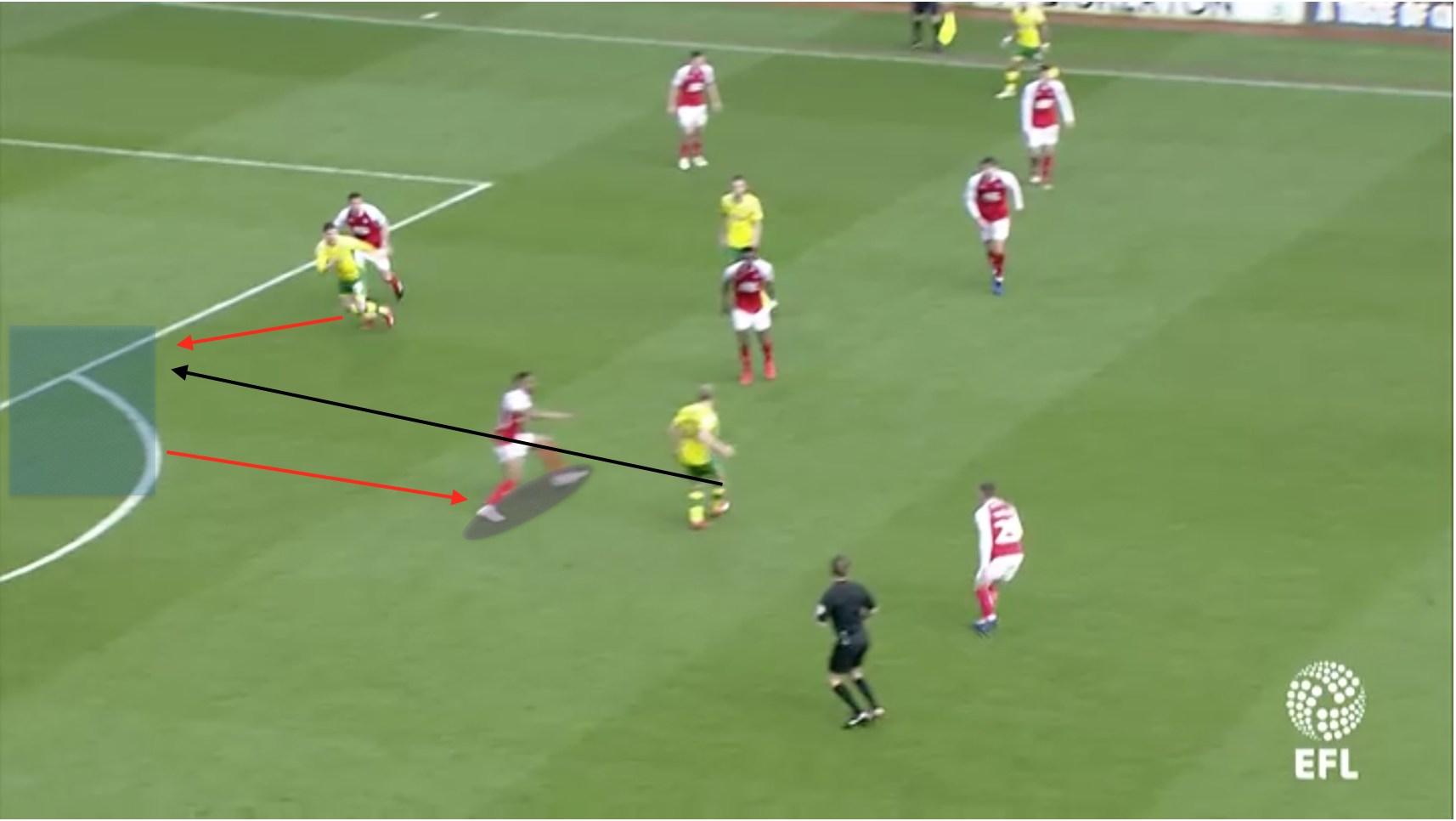 It was from similar situations in the second half that the Canaries continued to trouble the Millers, as players dropped off and pulled a Rotherham defender out of place to make space for a run in behind. In this below example, Pukki is again the manufacturer, pulling left-back Billy Jones inside. 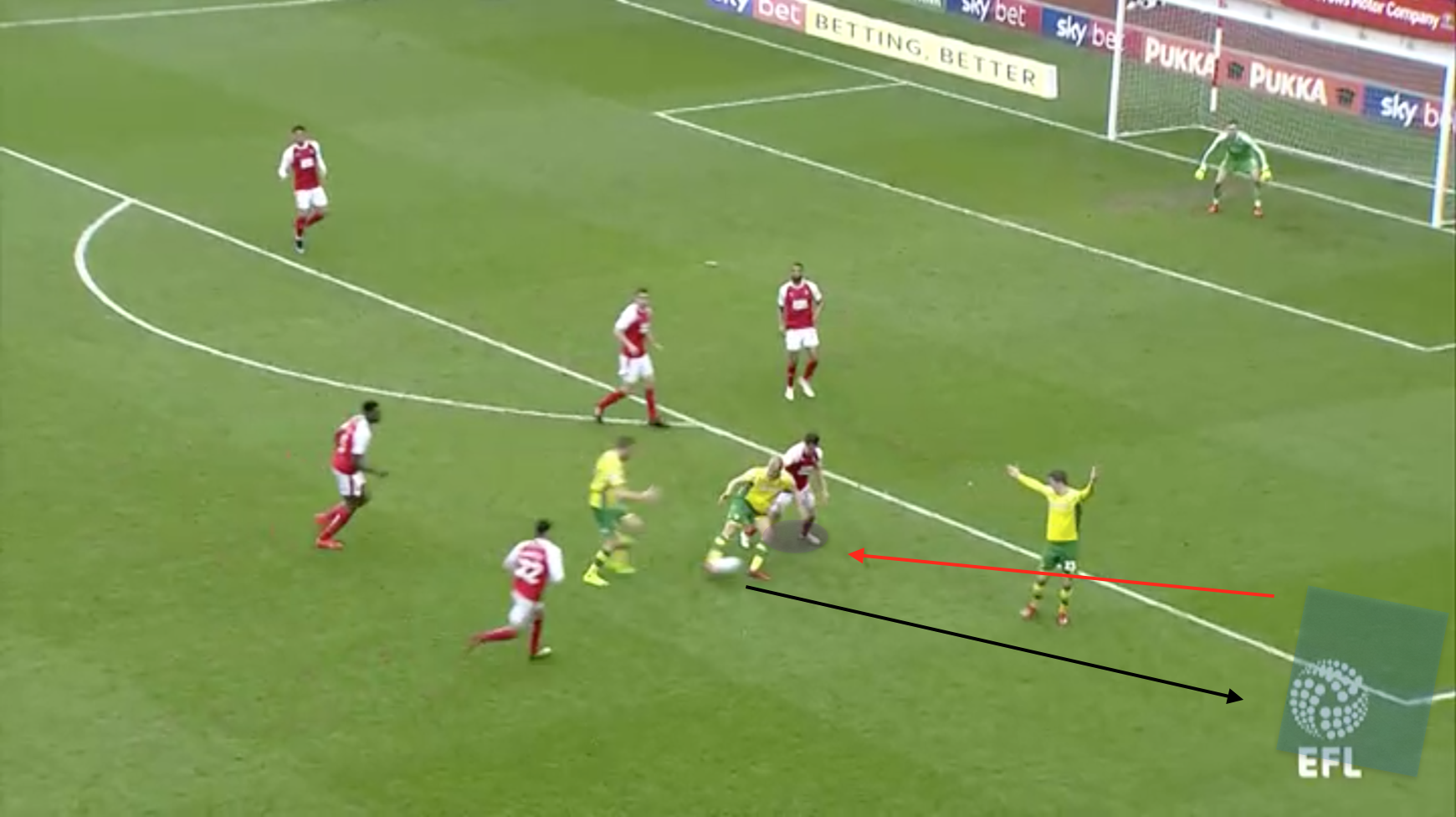 This is a telling example, as it made space for Norwich right back Aarons – who is out of shot – to get in a cross. This cross was deflected away for a corner from which the Canaries scored the winner.

The development of this particular game was fascinating. Rotherham’s setup initially frustrated Norwich, seeing the league leaders struggle for most of the first half. Credit must go to Paul Warne for the impressive way in which he set his team up, and to the players for their energetic execution of it. They ruffled the Canaries’ feathers in that opening half.

But a smart bit of play from Teemu Pukki just before the interval proved to be the key to unlocking the Millers. His action in assisting the opening goal shone light on a way for Norwich to pick holes in the Rotherham defence, which they further exploited in the second half. They managed four shots on target in the second period, compared to just two in the first 45 minutes.

Norwich remain top of the table and favourites for the title as we go into the final eight matches of the Championship season. Rotherham remain in the relegation zone by one point, although their performance was one to take heart from. Should they perform similarly in their remaining games, the chances of the Millers staying up will be decent.