Claudio Ranieri faced his first defeat since returning to Roma, losing 2-1 away to struggling SPAL in Serie A. It was a vital win for the Ferrara-based club as for the second consecutive season they aim to avoid relegation.

This victory marked another impressive tactical display from SPAL boss Leonardo Semplici, who has now done the double over the Rome side. The Biancazzurri earned a 2-0 win over what was then Eusebio Di Francesco’s team back in October 2018.

It was a particularly uninspired display from the side from the capital, and saw them fall further behind in the race for the third and fourth Champions League spots. 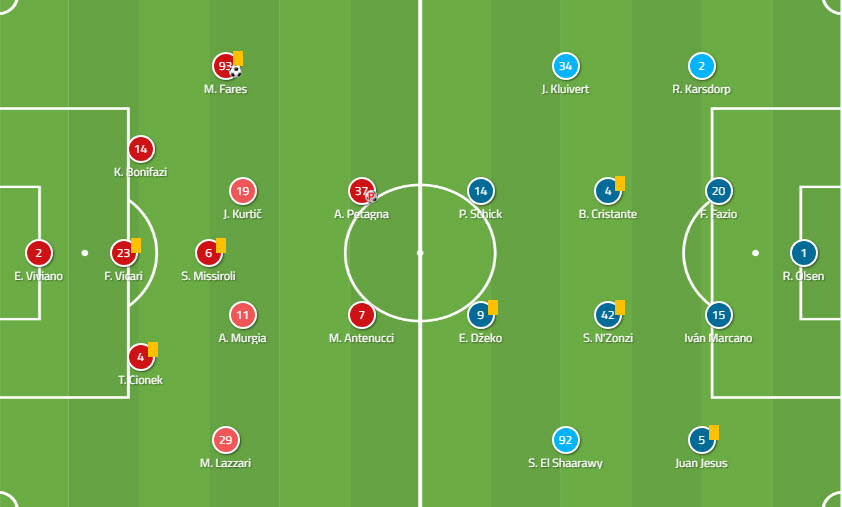 Despite experimenting with a 4-4-2 in recent weeks, Leonardo Semplici set his team out in their usual 3-5-2. In the first half in particular, Manuel Lazzari and Mohamed Fares got into very advanced positions and operated more as wingers than wing-backs. Strikers Mirko Antenucci and Andrea Petagna played a deeper role, however. Both forwards positioned themselves very close to the midfielders, providing extra numbers in both defensive and attacking situations.

As was expected, Claudio Ranieri sent Roma out in his preferred 4-4-2 formation now that he had Eden Dzeko now back from suspension. With Alessandro Florenzi suspended after being sent off in Monday’s win over Empoli, Dutch full-back Rick Karsdorp started on the right. Centre-back Juan Jesus moved to left-back as Federico Fazio returned to the centre of defence after a one-game suspension.

SPAL play out from the back

In the first half SPAL had 59% of the ball as they played out patiently from the back. As shown in the image below, Roma mainly sat deep and allowed SPAL to have the ball in their own half. Strikers Dzeko and Patrik Schick made few attempts to disrupt the back line.

Even as they crossed the halfway line, it was surprisingly simple for SPAL to circulate the ball, which was partly down to their numerical advantage in midfield. In the image below we see how easy it is for midfielder Simone Missiroli to receive the ball from Francesco Vicari.

Missiroli then found himself with enough time and space on the ball to pick out Alessandro Murgia between the lines.

With the midfield congested, Roma reverted to playing speculative long balls up to Dzeko and Schick. Very little came of this, however, since SPAL’s back three set-up meant they could always take on Dzeko and Schick in the air knowing that there would be an extra defender there to cover.

This is what happened in the image below following a goal kick from Roma’s Robin Olsen. As Dzeko (marked by Thiago Cionek) wins the header, Kevin Bonifazi takes care of Schick, safe in the knowledge that Vicari is on hand to provide cover.

In the image above it can also be seen how only one Roma midfielder is supporting the strikers, Stephan El Shaarawy on the left.

SPAL shut down the flanks

One area of the pitch where SPAL did not have a numerical advantage was down the flanks. In theory, this would be one area where Roma’s full-backs and wingers would be able to double up on SPAL’s wing-backs.

But Semplici had a plan in mind to stop this happening. The 51-year-old coach tasked interior midfielders Murgia and Jasmin Kurtic with man-marking Roma’s full-backs.

As can be seen in the images below, this prevented Roma from playing out from the back. Firstly, as Kurtic arrived to press Karsdorp, the Dutch full-back took the safest option and passed inside to Fazio.

Having received the ball, Fazio found any passes to the midfield blocked by SPAL’s forwards, who had occupied this space to block the passing lanes. Note Murgia’s position in the centre of the pitch.

When Jesus eventually received the ball, Murgia sprinted over to the right flank to close down his man.

It was in part this systematic pressing that led Roma to play so many long balls (65 in total), as SPAL made it difficult for them to progress the ball from defence to midfield.

Zaniolo caused SPAL problems with his movement as he often drifted into central positions and attempted to play the killer ball through to the strikers. SPAL struggled to deal with his dribbling through the centre, especially in transitions. In the image below, Zaniolo broke clear of Missiroli, playing through Dzeko who was fouled for Roma’s penalty.

Despite Roma having 64% of the possession in the second half and having more chances, SPAL were able to see the game out comfortably. This was because SPAL maintained a compact shape, even when in possession, as they looked to frustrate their Roman visitors.

In the image below, all 10 outfield players are in shot, with a relatively short distance between defence and attack. This allowed them to keep hold of the ball as they saw out the game.

The forwards played no small role in protecting the lead and maintaining the shape. Antenucci and Petagna held the ball up and made themselves available as passing options for the midfielders. Petagna especially drifted deep and wide to help his team circulate the ball.

Leonardo Semplici will be delighted with how his team executed his game plan. They took advantage of their numerical superiority in central areas and used man marking to protect themselves down the flanks.

Claudio Ranieri on the other hand will be far from impressed by his side’s performance. They looked rigid and uninspired on the ball and their midfield four never really got a grip on the game. They will have to improve and quickly if they are to be in with a chance of a top four spot this campaign.