The performances of SPAL has been largely unnoticed outside of Italy in the last year or so despite an impressive debut campaign in Serie A last term. This weekend they hosted Inter in Ferrara in a tough away game for the Nerazzurri. Somehow, despite having to suffer for large parts of the game, Inter came away with a win. This tactical analysis looks at the tactical trends of the clash and why SPAL made it so difficult for Inter.

Both teams set up with expected teams. SPAL always line up in a 3-5-2 and head coach Leonardo Semplici continued with that shape against Inter. Alfred Gomis started in goal with Thiago Cionek, Johan Djourou and Felipe in the back-three. Manuel Lazzari and Mohamed Fares started as wing-backs. Pasquale Schiattarella acted as the defensive midfielder with Simone Missiroli and Mattia Valoti ahead of him. Up front, the duo was former Atalanta striker Andrea Petagna and Mirko Antenucci.

Inter were sent out in a 4-2-3-1 with Samir Handanovic in goal. The back-four was Sime Vrsaljko, Milan Skriniar, Miranda and Kwadwo Asamoah. Borja Valero and Matias Vecino sat in midfield behind Balde Keita, Radja Nainggolan and Ivan Perisic. The talisman Mauro Icardi started up front.

Tactical analysis: How did SPAL dominate the game?

SPAL were well on top for long spells and especially dominated the first half. Let’s take a look at how they did it.

The biggest reason to how SPAL managed to disturb Inter was through their effective pressing. From their 5-3-2 base when defending they went high and man-marked Inter in their half. This often forced Inter into risky passes which were often intercepted in midfield. Below is an example of what it could look like. The two strikers and the three midfielders pushed high. As highlighted below, this opened huge spaces behind the midfielders but Inter could never exploit this. 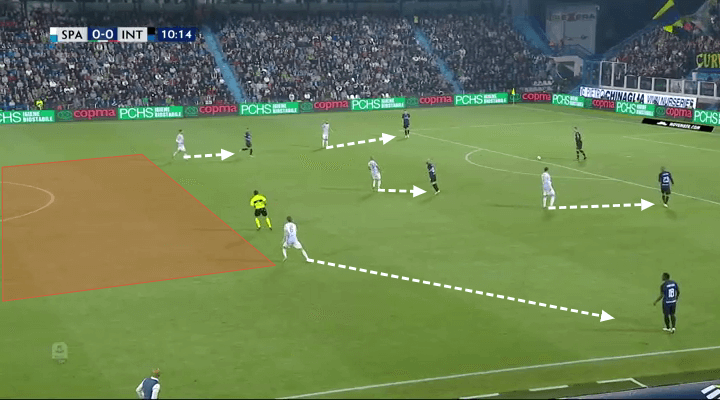 Here’s another example where SPAL pick up each player in Inter’s half. 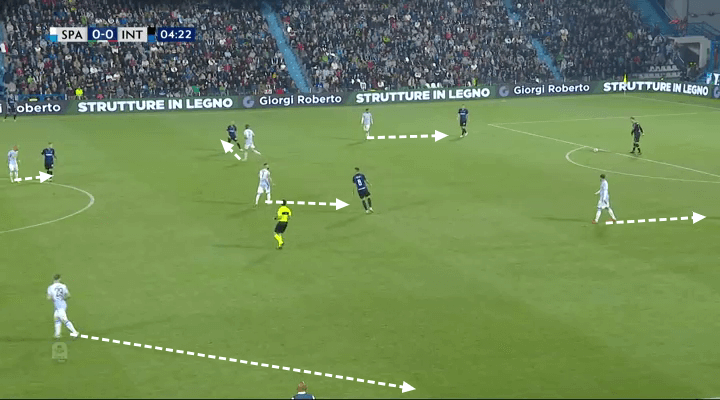 By man-marking in this manner, SPAL removed Inter’s options to build attacks from the back. Handanovic would often look to find Nainggolan through SPAL’s press with flat balls along the ground. This rarely succeeded, however. In the below example, the pass is cut out and SPAL counter-attack. 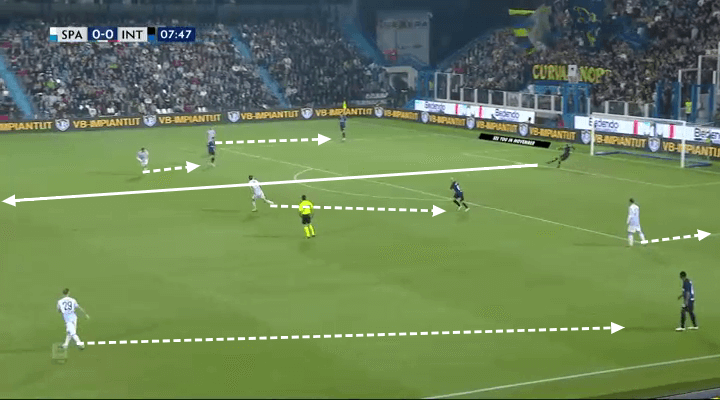 When the ball entered the wide areas SPAL would either let the ball near central midfielder go press the full-back or if the wing-back was nearby he would close down the full-back. In the below example we see how Missiroli provides pressure on Asamoah with the other central midfielder Valoti just behind him marking Valero. This obviously meant switches of play would be an easy and effective way to get out of pressure. 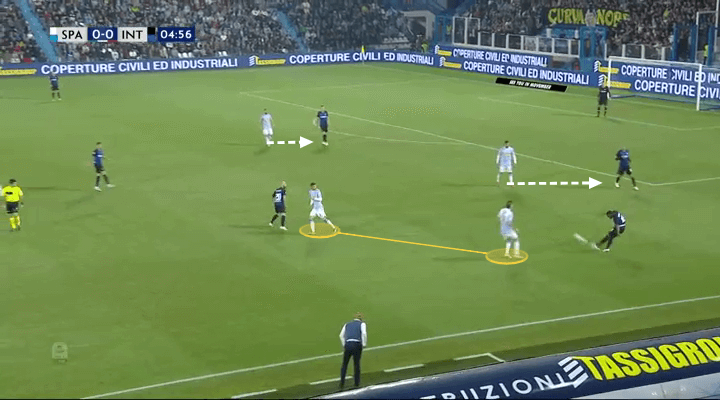 When defending in their own half, SPAL moved into a deep shape of 5-3-2 and tried to keep the central areas compact (see below). This often frustrated Inter and forced them to the wide areas. Unfortunately for SPAL, that’s where Inter are at their best. 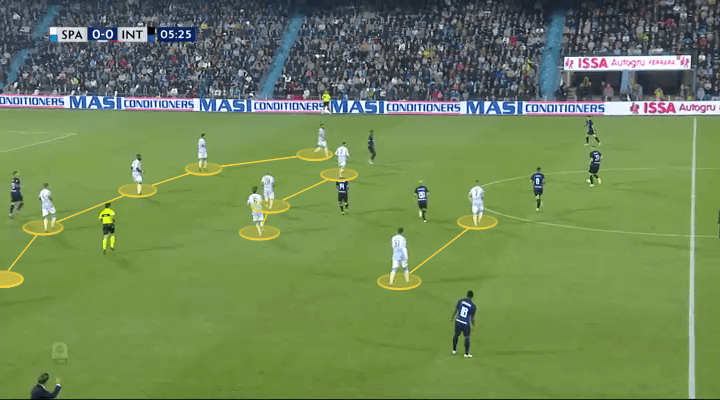 SPAL’s pressing was superb throughout and stopped Inter from dominating possession. I’ll continue by looking at their possession play.

As impressive as SPAL’s pressing was, their build-up play was almost as good. They moved the ball quickly between each other with crisp, short passes and used the entire pitch brilliantly. They always looked to play forward but never really went long but persisted with vertical passes along the ground. When building from the back, the goalkeeper Gomis was very influential. He always played out to his defenders even when pressed high. The defensive midfielder Schiattarella was very impressive with the way he dropped into space and started attacks with quick passing.

Below is a good example of how SPAL got out of Inter’s press. Schiattarella drops in to become an option for Gomis. As Valero steps up to press him he lays the ball off with a one-touch pass to Djourou who can drive into midfield with the ball. 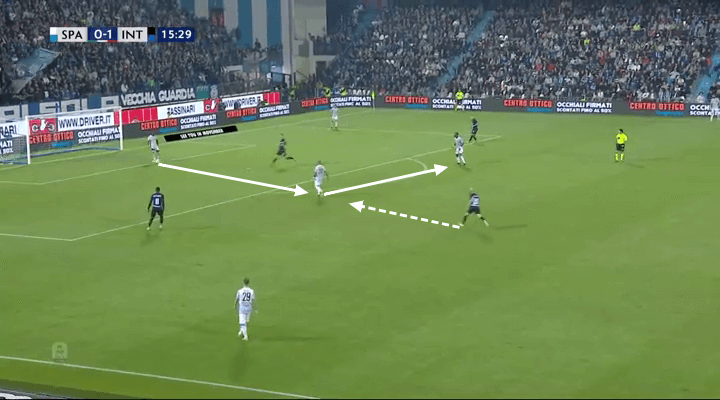 The below image is the continuation of the above scene. After breaking Inter’s press and then luring Valero into the press too, Djourou plays the ball into Valoti who instantly lays it off to Missiroli in the opposite half-space. You can see the space they’ve created for the former Sassuolo midfielder. Missiroli then sprays the ball wide to Lazzari who surges forward and crosses for Petagna who nearly scored. 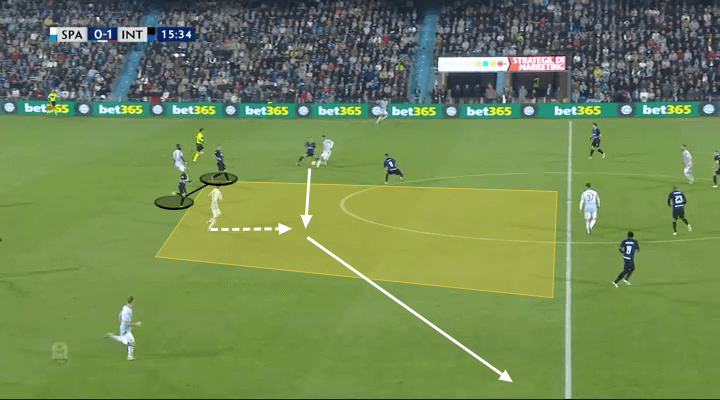 Inter understandably tried to close off the excellent Schiattarella and minimize his influence but SPAL often used third-man combinations to free their playmaker. They did this by having the two central midfielder’s start high and then drop into space to play a wall-pass back to Schiattarella. In the below example, Felipe plays the ball into Valoti who lays it off to Schiattarella who can then continue the attack down the other side. 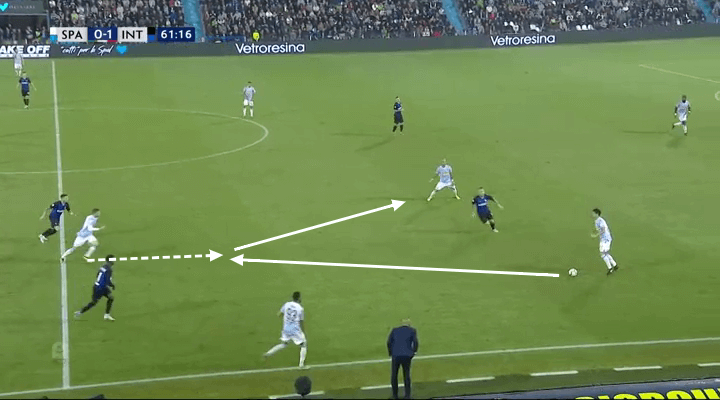 I was really impressed with SPAL’s passing and they dominated large parts of the game. Yet Inter managed to grind out a win thanks to a solid defence, a brilliant goalkeeper and individual quality up front.

Solid Inter stay in the game

As good as SPAL were they only managed to beat the excellent Handanovic once. The Slovenian goalkeeper made a string of stunning saves to keep Inter in the game. Inter’s defence was still rather solid. They often kept a compact 4-4-1-1 shape (see below) with man-orientations when pressing higher. After SPAL repeatedly played through the press, Inter decided to drop deeper and tried to contain SPAL’s attacks. 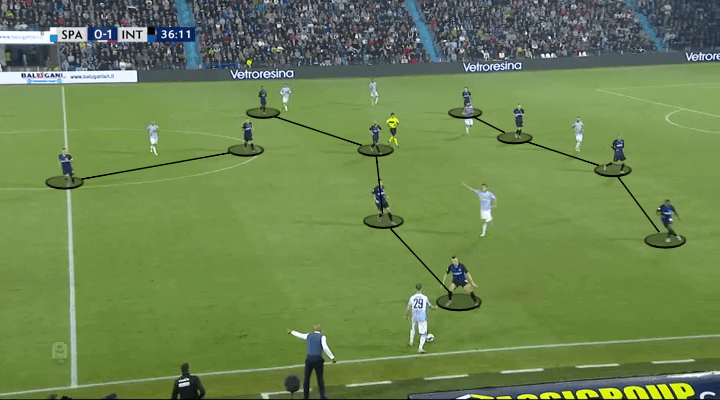 One way Inter managed to bring some order to their attack was by spraying the ball into wide areas. As mentioned above, these areas were naturally vacated and not prioritised by SPAL. As you see below, SPAL are very compact around the ball as they look to overload but there is acres of space on Inter’s right. These switches rarely allowed Inter to play within SPAL’s shape, but they did give them some control of possession in some phases of the game. 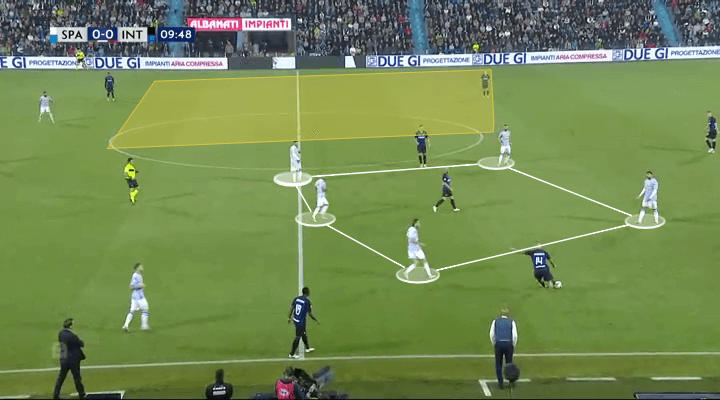 Both Inter goals came from their wing players. Inter have their great strength down the wings with players like Asamoah Perisic, Vrsaljko, Candreva and Keita and this showed for their goals. Below is the run-up to the first goal. Vrsaljko plays a one-two with Valero and attacks the only weak point in SPAL’s shape – the space between wing-back and wide centre-back. The initial cross was blocked, but Vrsaljko got another chance and found Icardi who scored. 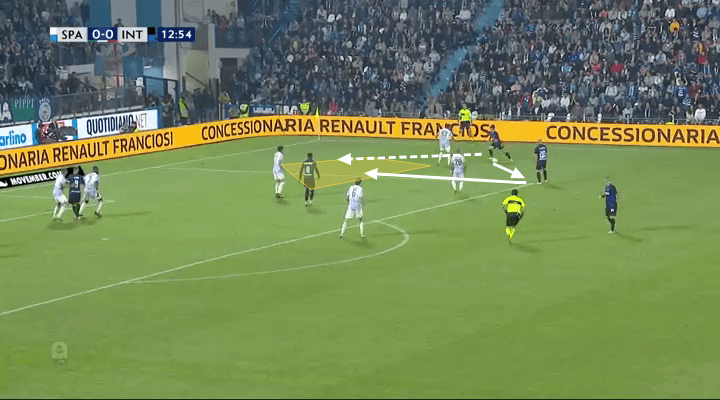 The second goal came from Perisic breaking into the pitch before playing Icardi through on goal. The Croatian wide players and their talismanic striker, therefore, were the difference as SPAL rued a missed Antenucci penalty and several missed chances.

Inter got somewhat lucky to leave Ferrara with a win as SPAL easily deserved at least a point. Luciano Spalletti won’t care though as his Inter are only looking to build a long winning streak in Serie A. As this tactical analysis has shown, the quality in Serie A is high and SPAL are one of the most well-coached teams in Italy. It will be interesting to follow them this season as they look to establish themselves in the top-flight.