In terms of high profile matchups in the top four leagues of European football, there is arguably no match bigger at the moment than Liverpool vs Manchester City. The narratives surrounding the two sides combined with the quality of players at their disposal and the fact that they are now the two favourites to win the Premier League made this math one not to be missed.

Last season, Manchester City were dominant under their Spanish coach Pep Guardiola, that is until they came face to face against Liverpool and their coach Jurgen Klopp. The intense high pressing system favoured by Klopp seemed to unsettle a City side who had been gaining plaudits all season for their ability to interplay and play out from the back under pressure. This very quickly developed into a pattern when the two sides faced one another and indeed Liverpool were the side to knock City out of the Champions Leauge.

The narrative and story around the two sides last season, however, was not always a purely sporting one with the Manchester City coach being attacked on its way to Anfield to play their Champions League clash. This form of psychological warfare led to a substandard display by City and has caused a sense of mistrust between the two clubs and their supporters since.

All of this led us to the first meeting of the two sides this season at Anfield once again. In his pre-match press conferences, Guardiola had looked to calm the ill feeling between the two clubs as he looked to focus the attention back on to the football and away from the off-field incidents last season. On the other side of the divide, Klopp was also keen to highlight the positive nature of the fixture.

What followed was a fascinating match that resembled a game of chess more than any other single match that I can recall watching. Both coaches looked to adapt and counter the others moves as they tried to find a winning edge.

The biggest piece of team news from Jurgen Klopp and Liverpool saw the Croatian international central defender Dejan Lovren recalled to the starting line-up in place of right-back Trent-Alexander Arnold. This switch saw Joe Gomez move out of the centre of the defence over to right-back, a move that broke up the impressive partnership that Gomez had been forming with Virgil Van Dijk.

The other major piece of team news saw Naby Keita continue on the bench as Klopp preferred a midfield three of James Milner, Jordan Henderson and Giorgino Wijnaldum.

It is no surprise that Liverpool prefer to press high and often, given that their coach Jurgen Klopp all but created a new pressing system in ‘gegenpressing’ whilst at Borussia Dortmund. This match saw Liverpool switch between a high and medium block as the situation required but the pressing from the front three was always intense as they tried to stop City from building comfortably from the back.

This high pressing system was key in Liverpool disrupting the rhythm which City like to play with last season in the key matches between the two sides. 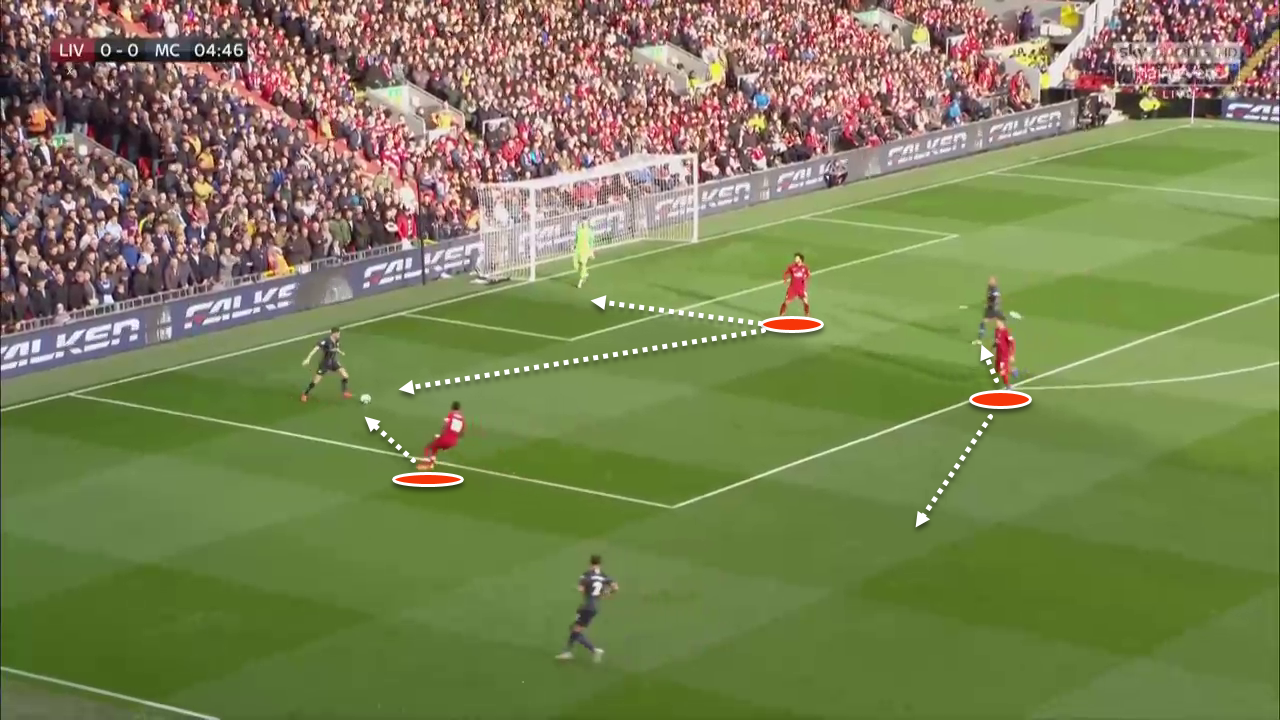 In the early stages of the match, this high press was especially evident as Liverpool moved immediately to close City down deep in their own half as they looked to quickly assert their control on the match.

It is especially interesting to note the intelligent angle that Sadio Mane is taking us he presses the man in possession of the ball. He is approaching at an angle that covers the passing lane out to Kyle Walker on the right side. With Salah also taking away the possibility of an easy pass back to the goalkeeper and Roberto Firmino covering the pass to the second central defender. The front three for Liverpool are quick and intelligent with their movement and their positioning meaning that they can cover more than one passing angle at once, this makes it doubly difficult for City to play through them. 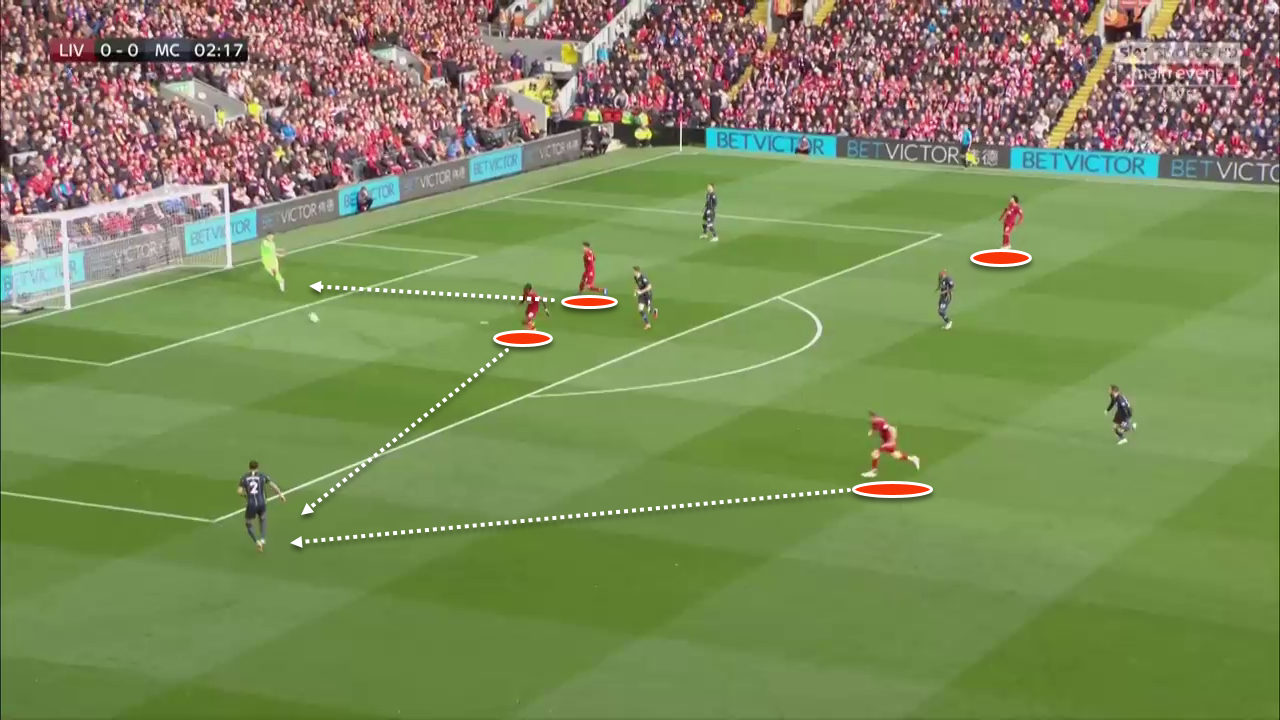 Again here we see Liverpool looking to throw City off the pace as they start the match. This time central midfielder James Milner moves to join the press as the Manchester City goalkeeper Ederson finds the free pass to Kyle Walker out on the right-hand side. Mane moves to cover Walker from the side whilst Milner presses at an angle that prevents the diagonal pass through to Bernardo Silva in the centre of the midfield.

Liverpool structure in the build-up

So far this season we have seen a clear preference from Jurgen Klopp and Liverpool to build up using the two central defenders as the base. Both Virgil Van Dijk and Joe Gomez are exceptionally strong in the build-up phase with both being comfortable when asked to pass the ball out of the ball or when running with the ball vertically to break the line of the opposition.

In this match however, with the less comfortable Dejan Lovren in the centre of the defence, we saw Liverpool change the structure as they built up from the back and started their attacking phase. 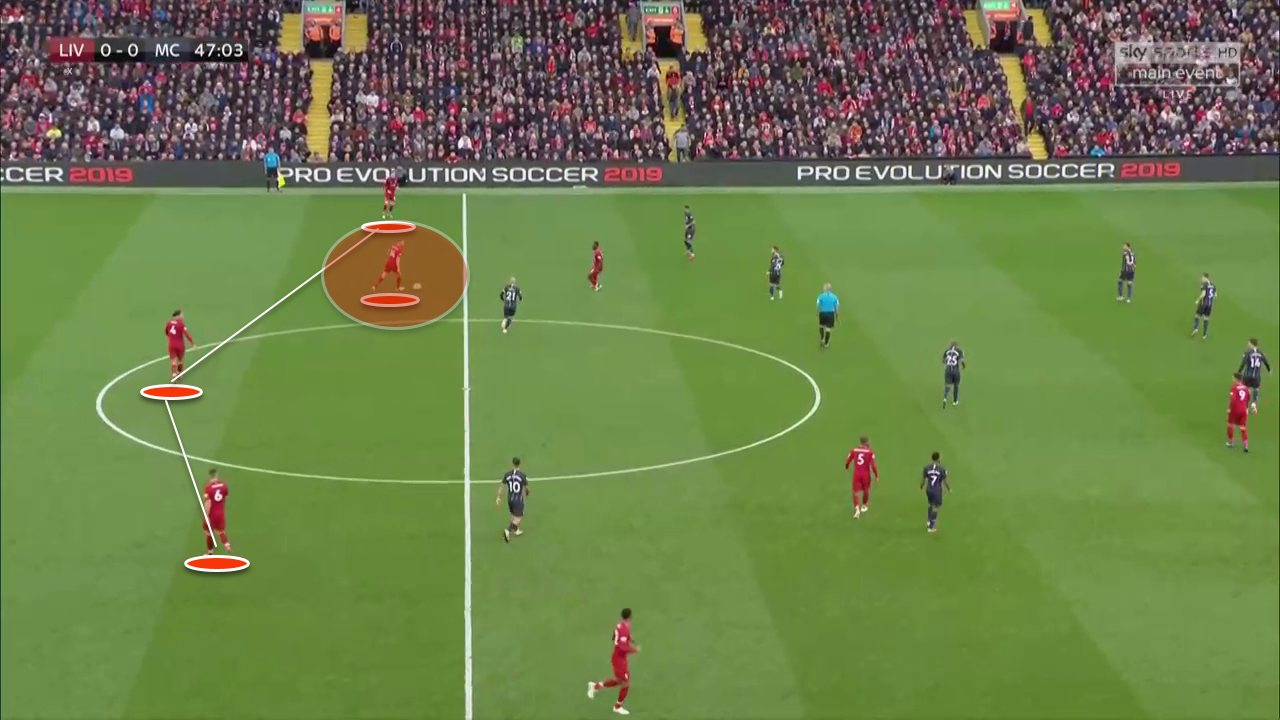 As Liverpool began to move into the attacking phase we would see one of the three central midfielders, usually Jordan Henderson or James Milner, drop into the back line on the left side to create a back three.

This movement is now new from Liverpool and they used a similar structure under Klopp on several occasions last season. There are two clear benefits from this structure that make it a key part of Klopp’s gameplan in this match. First of all, by dropping in and forming a back three the midfielder in question frees Andrew Robertson to move high on the left side of the field. This, in turn, allows Sadio Mane to take up a position in the half space or even the central areas.

Secondly, this mechanism creates more passing lanes centrally that Liverpool can utilise as the ball is shifted between the three that are at the base of the attacking structure. 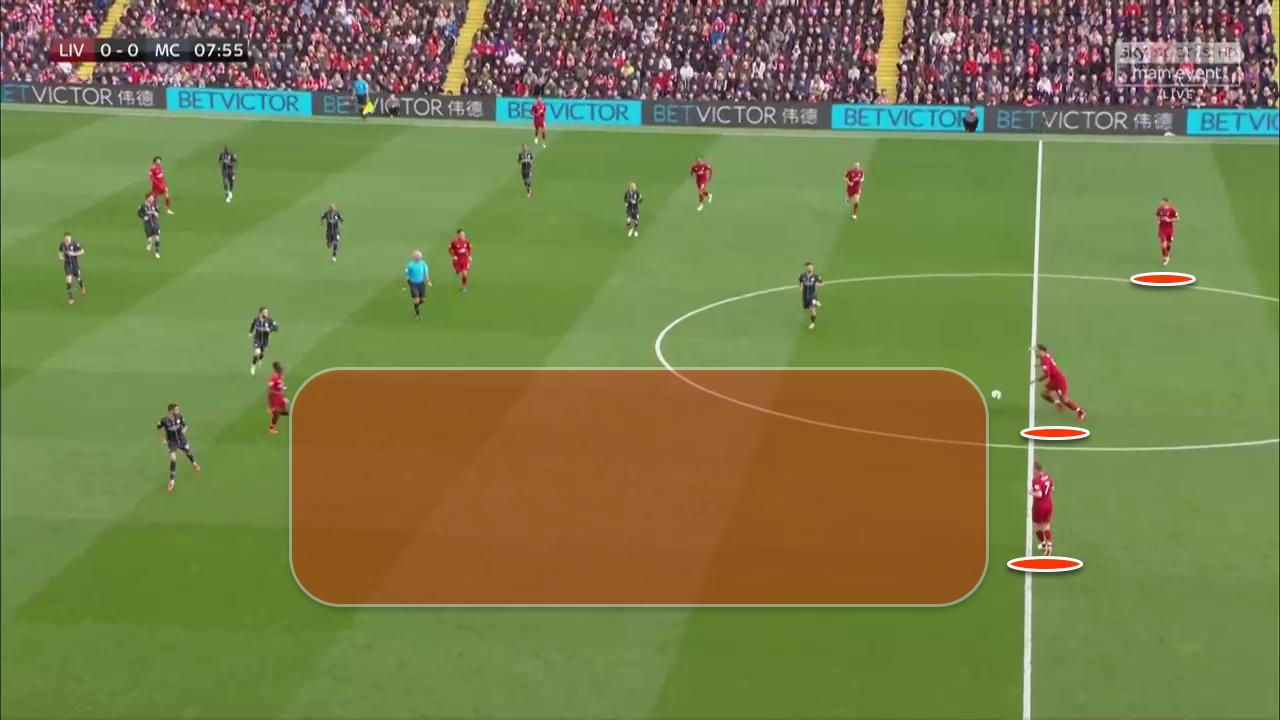 Here you see Virgil Van Dijk in possession centrally with James Milner having dropped into the left of the back line. This creates a bigger gap between the defensive and midfield units but this space can be filled by the likes of Milner or Van Dijk stepping forward in possession.

As the game progressed both sides became more vertical in their build-up play as they looked to create chances on goal against strong defensive opponents. Liverpool, in particular, started to use a concept known simply as ‘up, back and through’ in order to send their fullbacks in to space behind the City defensive block. 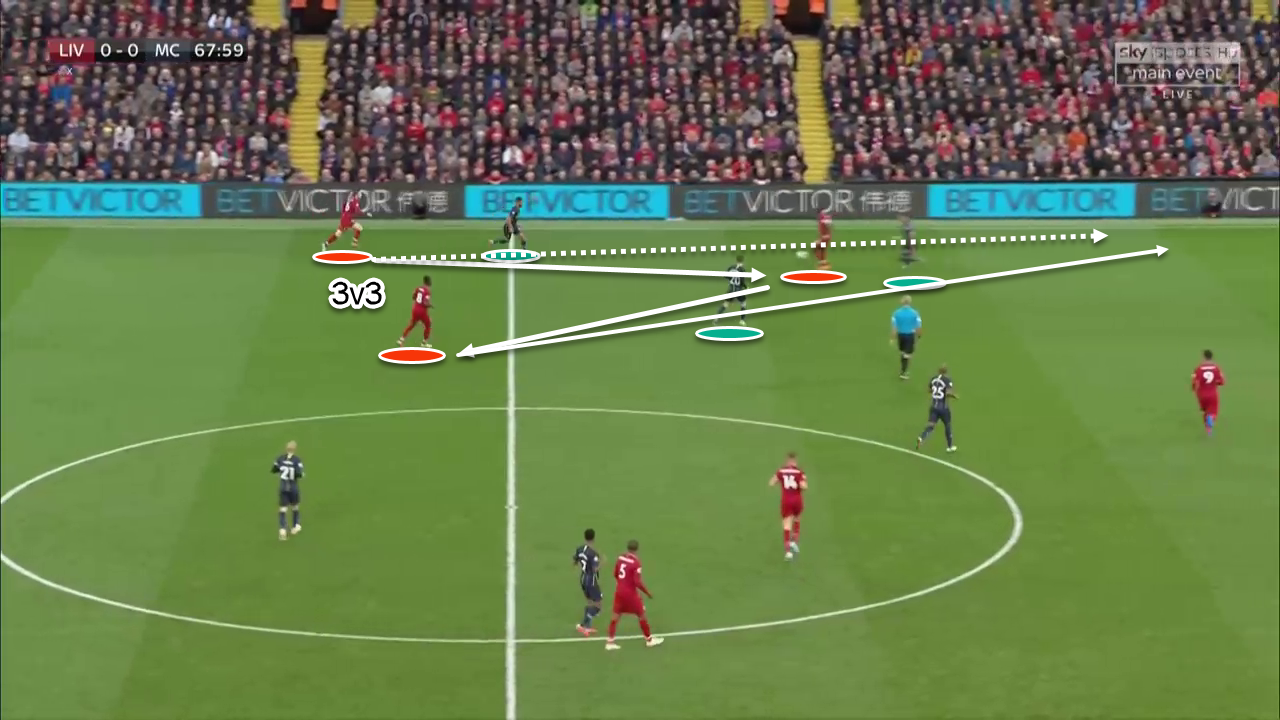 This graphic is quite busy but bear with me. As the first pass is made by Robertson in the left back position up to Sadio Mane the Scottish left back continues his run forward. The second pass is then set back to Wijnaldum in a deeper position and the Dutch midfielder is then able to play a quick vertical pass into the run of Robertson who is now moving in space behind the City right back. 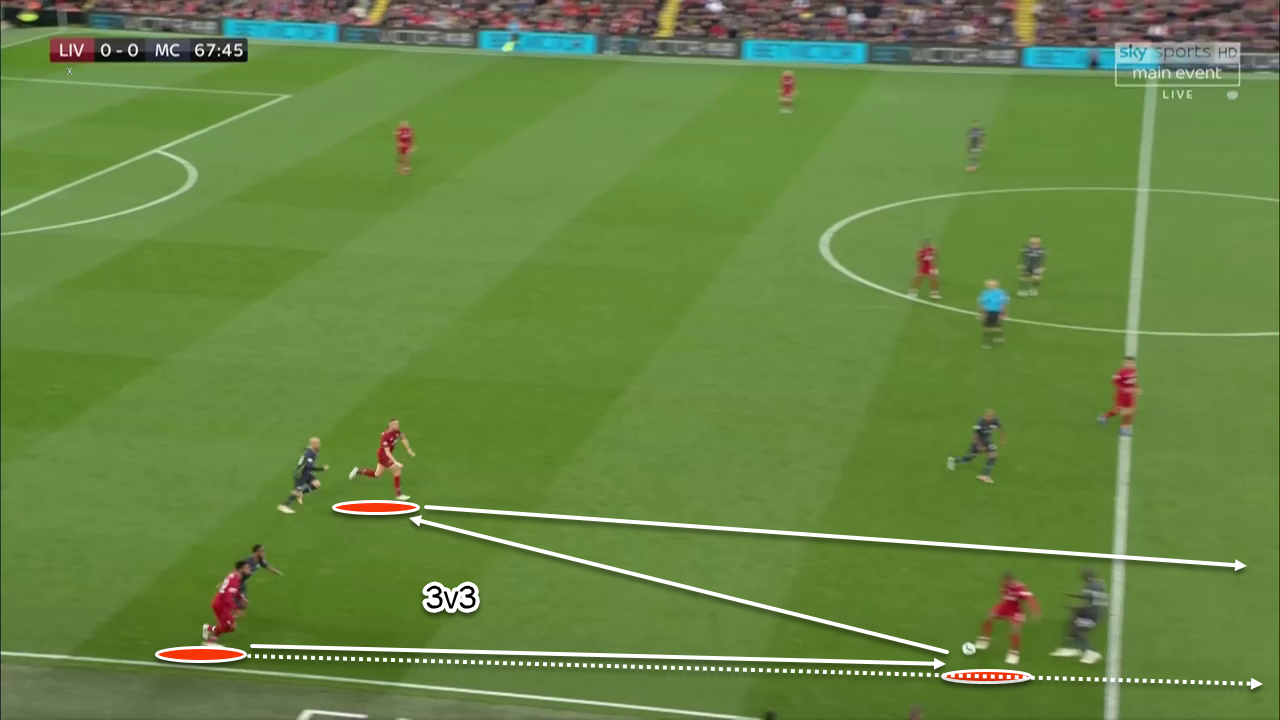 This time we see a similar passing movement on the right side as Joe Gomez is the player who plays forward and then continues his run into the Manchester City half of the field. As the ball is set back to Dejan Lovren the Croatian is able to play a vertical pass into the path of Gomez and the young England international is able to continue his run forwards into the final third.

This simple passing combination is an effective way of bypassing the opposition midfielders and finding runners in space in the attacking third.

In the end, 0-0 was probably a fair result although the lack of clear goalscoring chances should not be a reflection on the quality of the match itself.

Both coaches continually made small adjustments both to try to gain an edge and to counter the moves that the other coach was making.