On Sunday two of the best teams in the Spanish Primera Division, this season faced each other in the Wanda Metropolitano. In the end, Atletico was capable of beating the strong Real Betis of Quique Setién with 1:0. But, the game had a lot to offer. It was basically another match-up of defensive masterclass versus positional play.

Under Diego Simeone, Atletico became probably the best defensive team on the planet. While Quique Setién formed an excellent team in Sevilla which executes the ideas of positional play nearly to perfection and was extremely successful last season.

As always Real Betis played in a 3-4-2-1 formation with Canales and Guardado, later Carvalho as central midfielders. While Lo Celso and Joaquin were more offensively and moved between the midfield and defensive line of Atletico.

Atletico, on the other hand, used their usual 4-4-2 formation which could transform into different shapes during the pressing. With Koke and Saul Atletico had to very flexible midfielders on the pitch and with Kalinic a dangerous striker who got supported by Antoine Griezmann.

From the start of the game, Atletico tried to press higher up the pitch in order to disrupt Real Betis rhythm. The side of Setién usually loves to build-up from behind and rarely chooses a long ball. Even under the strong pressure of Atletico Real Betis tried to find solutions with their short passing. One major reason why Real Betis dominated the first half was their precise positioning due to the principles of positional play. 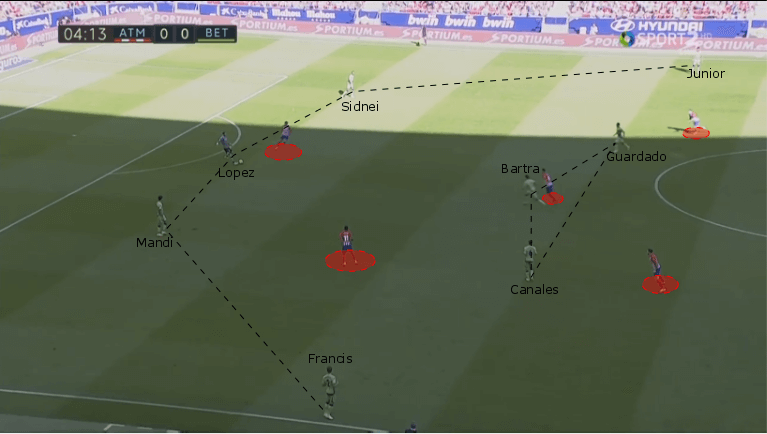 They occupied the necessary spaces nicely and were always connected through triangles and diagonal passing options. With Pau, Lopez Betis has a technically gifted goalkeeper on who they relied on during the build-up. Against Atletico, Setién had an interesting plan to overcome the pressing of the Rojiblancos. When Real Betis played out from the back their central midfielder Marc Bartra pushed into space in front of the defensive line.

Here, they successfully could overplay Atletico´s pressing due to Bartra´s central position and his quick layoff-pass. After that, they faced a 3v2 situation in the yellow marked space. Rodri had to move out of position in order to press. Due to the numerical superiority Real Betis could play the through ball and Loren got into a good scoring position.

With that move Real Betis was capable of using their numerical superiority in the centre. Due to their four central midfielders and the back-three Real Betis focused on the centre to move the ball forward. With Marc Bartra as the part-time holding midfielder, Guardado and Canales could move higher and stay a bit wider in the halfspaces which created a nicely connected shape.

Guardado or Canales could also drop into the centre to receive the ball. Therefore, Real Betis was capable of dominating the game in the first 30 minutes. Atletico had just a small amount of possession and their pressing was rarely successful.

Their initial plan was to press Real Betis with a 4-3-3/4-4-2 diamond formation. Most of the time Rodri was positioned deeper covering the space behind Koke and Saul. Both midfielders focused on Betis midfielders, Canales and Guardado. As a reaction to the position of Marc Bartra, Kalinic moved deeper in order to defend the former BVB player. Griezmann usually moved higher and oriented on Sidnei while Lemar or Saul would press Mandi if he received the ball. Most of the time it was Lemar but sometimes Saul pushed out of the block to press the right halfback of Real Betis back-three.

Lemar would then move deeper and stay in a wider position. The French winger was responsible for defending Betis right wingback Francis and having an eye on Canales who was positioned behind Saul.

I mentioned that Atletico´s pressing wasn’t that successful. This is only partly true. Due to their fantastic individual and group-defence, Atletico was still hard to overplay. All of Atletico’s players use their cover shadow intelligently to successfully close passing lanes. Especially, the positioning of Koke and Saul was always extremely precisive. In the first half, Atletico lacked the intensity in the pressing. Still, their focus on the centre allowed them to stay compact although Real Betis dominated the game.

Atletico identified the strength of Real Betis before the game and was able to close the relevant spaces. Setién’s team loves to play through the middle where they have their most dangerous attacking players. Their 3-4-2-1 is clearly focusing on the centre of the pitch. That´s why Atletico tried to close those passing lanes. Consequently, passing lanes to the wings got open. Due to the higher positioned Griezmann and Lemar, Real Betis could easily find their wingbacks open. However, in those spaces Betis wasn’t really dangerous.

Here, you can see Atletico´s approach. They used a lot of man-orientations in the centre but those were extremely flexible. In that example, Saul and Koke cover the central players of Real Betis while Kalinic, Lemar and Griezmann press the back-three. In the end, Real Betis can only play the ball to Canales at the wing. Consequently, Saul would push out to press while Koke and Rodri adjust their position to cover the space left by Saul´s movement.

Furthermore, one of the biggest strengths of Simeone’s side is the pressing on the wing and the closing of all passing lines towards the centre. That’s why Real Betis could rarely take advantage of the open wings and therefore struggled to penetrate the centre. Then, the ball-far halfspace wasn’t covered by Atletico’s defence constantly, especially, when they pressed higher. But, Atletico is so good in isolation the opponent on one side.

In that example, Francis has the ball on the wing. Filipe Luis and Lemar cover the space and the possible passing option for Francis. As a result, Real Betis has no possibility to play the ball into the blue space. In order to solve that problem, Francis passes the ball to Carvalho. But, Rodri’s timing is perfect so Carvalho has no chance to turn with the ball and gets immediately pressured by Rodri and Kalinic. The biggest strength of Atletico is, that they have a good timing when applying pressure to the ball carrier. As a consequence, most teams can switch sides quickly against Atletico.

Real Betis struggled to play quickly into the space between the lines. Their structure helped them to move the ball. However, they lacked speed and the right movements to penetrate Atletico´s defensive shape and find their players between the lines. Usually, Atletico used their flat 4-4-2 when they had to defend in deeper zones. In the first half, it was a bit asymmetrical in order to quickly go into a more aggressive 4-3-3 pressing.

Real Betis central midfielders were positioned behind the first line of pressure which gave Betis a 5v2 situation. But, the defensive shape of Atletico was so compact and the movement of the midfield line very good. So, they could quickly press Carvalho and Canales in the centre. Often, Lo Celso supported Canales in the right halfspace. Both midfielders can play defensively and offensively so they swapped positions regularly. But still, Atletico managed to close the passing lanes to Real Betis three offensive players between the lines. 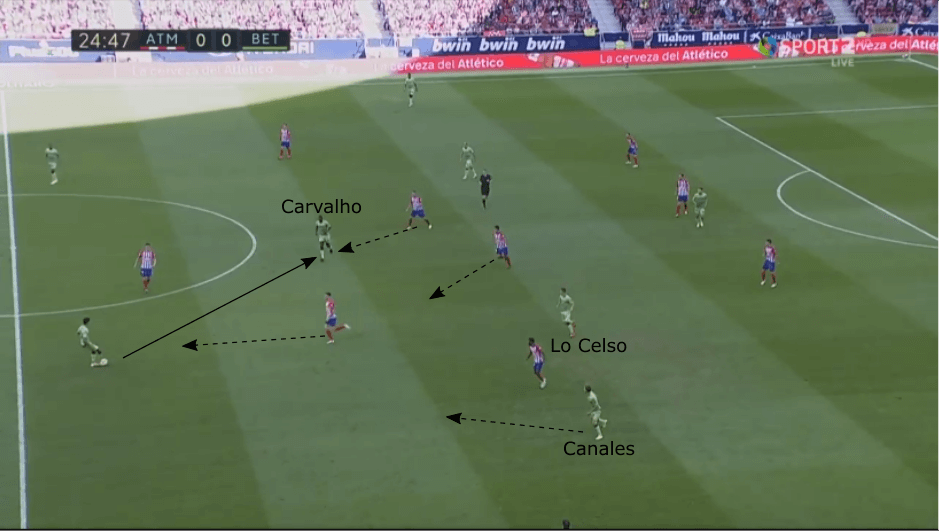 In the first half, Real Betis dominated the game. They had a high percentage of possession and their positional play provided them with a good structure. As a result of the good structure, Real Betis could quickly switch in the transitional moment and immediately counterpress. The aggressive counter-pressing denied Atletico easy counter-attacking possibilities.

In the second half, Atletico had more possession because they pressed higher. They switched between their 4-3-3 and 4-4-2 pressing with a higher midfield line. Real Betis struggled to play out from the back and Atletico could intercept a lot of passes in Betis half.

After they won the ball Atletico used quick combinations through the halfspace to get into good goal-scoring positions. Especially, Kalinic had a few good chances. And also, out of a solid build-up, Atletico was capable of creating chances with long passes behind the last line of Real Betis or by overloading the space between midfield and defence.

In the end, Atletico was the dominant team in the second half and had the better chances. Quique Setién had a solid plan during build-up in the first half. However, the defensive shape of Atletico was compact and in the second half, the pressing was too aggressively for Real Betis to play through it. But, there were a few interesting takes from that game. Real Betis creative build-up with a lot of movement which triggered Atletico´s pressing but gave Betis the chance to overplay it as we could see in the first example. Furthermore, Atletico showed another great defensive performance. The accuracy of their movement as a team and the individual defence to deny the ball carrier to turn with the ball were just impressive.