Miha Zajc. Know the name? If not, you’re unlikely to have watched Empoli this season. The 24-year-old Slovenian attacking midfielder has looked excellent so far and is tipped for a huge future in Italian football. After Slovenian attackers like Josip Ilicic and Valter Birsa have been consistent performers for years, Zajc looks like he could reach even higher levels. This tactical analysis looks at the potential of Empoli’s crown jewel.

Born in the Slovenian town of Sempeter pri Gorici, right at the Italian border, perhaps Miha Zajc was always destined for a career in Italian football. Zajc spent the first years of his senior career at NK Interblock but also spent time on loan at Olimpija Ljubljana and NK Celje. After 51 appearances in the Slovenian first division for Celje, the then 20-year-old Zajc moved permanently to Olimpija Ljubljana. In the capital, Zajc made 70 league appearances, scoring 16 goals and winning the Slovenian title in 2015/16. He moved to Empoli in January 2017. As Empoli were relegated, Zajc made five Serie A appearances and scored one goal before the season ended.

The following campaign in Serie B saw Zajc really grab the headlines in Italy’s second tier. Empoli comfortably won the league and Zajc was instrumental from attacking midfield in an attack that saw the two strikers Francesco Caputo and Alfredo Donnarumma score 26 and 23 goals respectively. Zajc added eight of his own in 41 appearances as Empoli returned to the top flight. This season, Zajc has started seven of the eight games, only missing one due to suspension. Zajc has also made a good start to his international career with two goals in seven caps for Slovenia.

Now let’s look at what the attacking midfielder brings to Empoli’s game.

Empoli started the season with a 4-3-1-2 formation where Zajc played as the number 10 at the top of the midfield diamond. In recent weeks, however, Empoli have changed their formation and now use a 4-3-2-1. This means they now have two central attacking midfielders behind a single striker rather than one attacking midfielder behind two strikers. For Zajc, this has meant he still plays centrally but appears more in the half-spaces than in the central lane. Along with fellow Balkan creator Rade Krunic, Zajc’ responsibility is to feed the striker Caputo with through balls and to combine with the other midfielders to create chances for the Tuscans.

Zajc is a very creative attacking midfielder in the true sense. Attacking midfielders from the Balkans have always lit up Serie A and Zajc is no different. He follows in the footsteps of players like Stevan Jovetic, Adem Ljajic, Goran Pandev, Ilicic and a plethora of other creative playmakers to impress in recent seasons. The base qualities for an attacking midfielder is vision, technique and passing ability. Zajc tick all three boxes.

First of all his technical ability is fantastic. Zajc is so comfortable with the ball and can take it in the tightest of situations and find his way out with a clever turn or one-touch pass. His dribbling is impressive and he averages 2 dribbles per game. He also has a great shot from distance and isn’t afraid of using it which is highlighted by the Slovenian averaging 3.7 shots per game.

In terms of vision and passing ability, Zajc is superb. His technique and close control is excellent, which leads to him always being willing to receive the ball. Thanks to his vision, Zajc usually have two or three options already in his mind when he receives the ball. This gives him the possibility of making good decisions in split seconds. Below is one example where all of Zajc’ ability results in him setting up a goal for Caputo. After receiving the ball he drives forward and provokes pressure from a Cagliari defender. As such, space opens up behind the defender for Caputo to run into. Zajc holds the pass until the right moment when he slides it through to the striker. 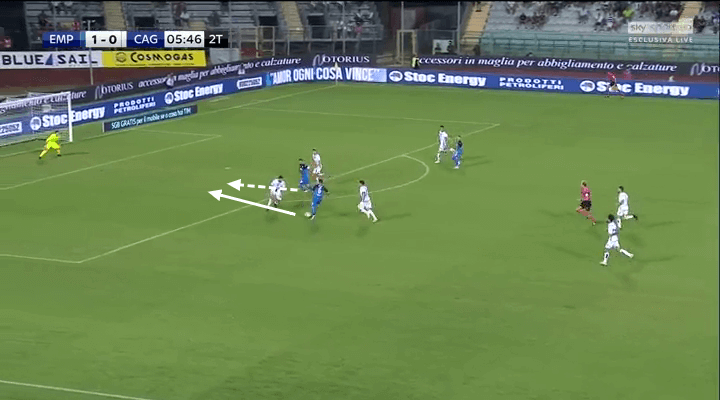 Zajc’ passing ability is extremely impressive. In fact, he averages 2.1 key passes per game in Serie A. Below, he spots a gap in Frosinone’s defensive line and the run of one of his strikers. He plays a sharp through-ball into the space and seconds later Empoli score thanks largely to Zajc’ assist. 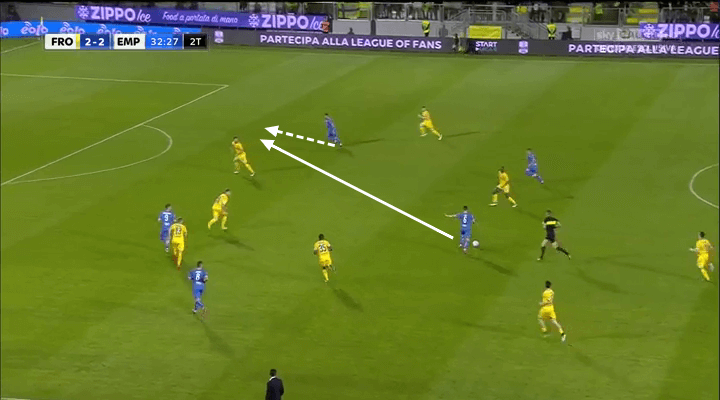 Zajc is also dangerous from the half-spaces with his ability to send in crosses. This assist below is a mix between a through-ball and a cross as he plays a low ball around the central defender into the space of his teammate. Most players wouldn’t even spot this pass but Zajc has creativity few possess. 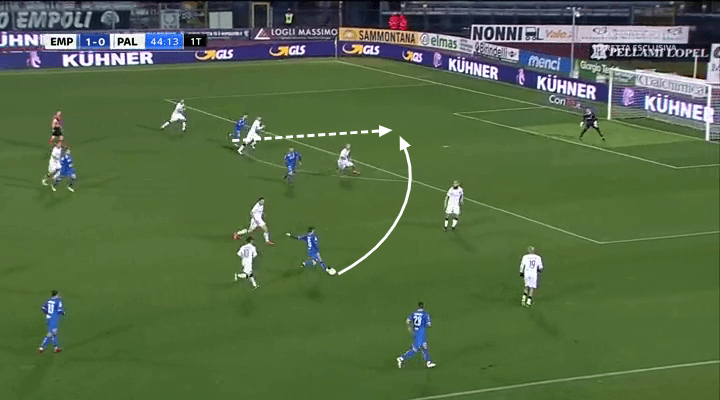 Zajc’ intelligence isn’t only demonstrated with the ball. He also times runs into the box very well. Below he spots a gap, makes a run and scores. 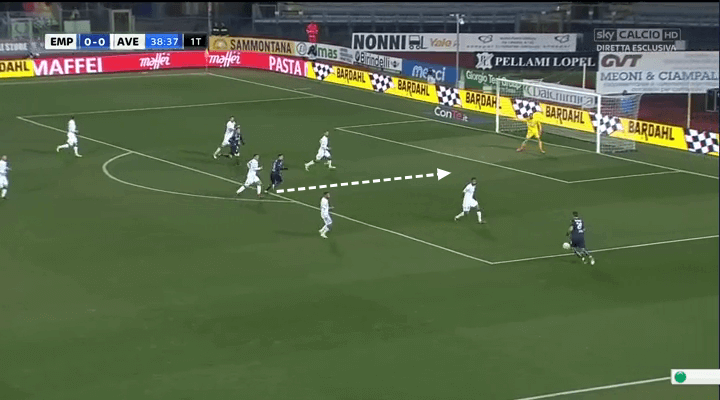 Below is another example as Zajc spots a gap in the opponent’s defence and makes a deep run in-behind. 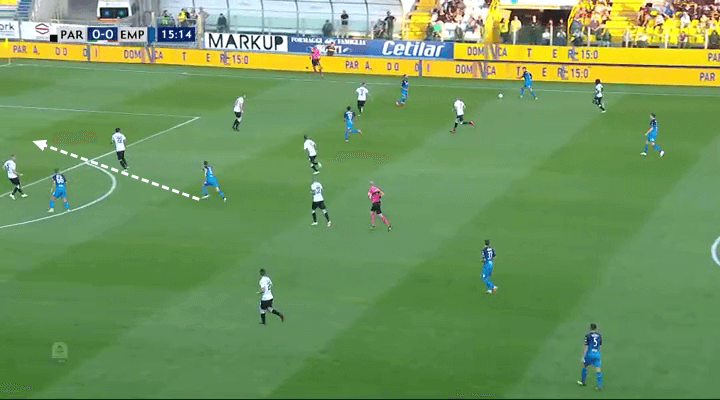 What the future may hold

Miha Zajc is a very promising attacking midfielder who impresses greatly with his skill, passing ability, vision and creativity. He’s not consistent though and needs to improve in this regard to earn a move to a bigger Italian club. It remains to be seen if he’s a player for any of the striped teams (Juventus, Inter or Milan) but he definitely has the potential to be a great Serie A player for clubs like Fiorentina, Torino or Sampdoria. Make sure to check out Empoli whenever you can this season to catch a glimpse of the latest Balkan creator to impress in Italy.