It was the first big game of the season for Thomas Tuchel’s PSG in the league and he wasn’t found wanting. Faced with a Lyon team coming to the Parc des Princes and, with the same ambitions as against Manchester City in terms of pressing, the Parisians once again stacked their defence with seven players to hold tight in the first half before unleashing the Neymar-Mbappe duo. On the other hand, OL lacked imagination, and then saw its game plan shattered following the sending off of Lucas Tousart.

Nine shots to two and 63.1% possession at the Parc des Princes. It had been a long time since an opponent of Paris Saint-Germain has posted such statistics. For 45 minutes, despite the very premature exit of Nabil Fekir in the seventh minute, OL deprived PSG of the ball and opportunities. For this, they used the same ingredients as against Manchester City: effective high-pressing sequences, increased vigilance after losing the ball to prevent transitions and a compact midfield block to stall the progress of Paris.

Despite a promising start from the visitors, PSG still took the lead. In the eighth minute, Mbappe earned a penalty following a completely mistimed challenge by Anthony Lopes. The move had come from the first long Parisians pass. Until then they had struggled to find solutions to feed Neymar between the lines. The Brazilian was indeed closely shadowed by Lucas Tousart, placed in the middle of the midfield after the exit of Nabil Fekir.

Much more than the tactical approach of Olympique Lyonnais, it was this first goal that dictated the rest of the first half. After eight minutes, the possession was also in favour of PSG (20 passes to 14). It was only then that it largely switched in favour of OL (62% until the sending off of Kimpembe after 31 minutes). And for good reason: the Parisians played deeper than their opponents. Neymar, Cavani and Mbappe put little pressure on OL on the ball and OL easily bypassed this first line to enter the opposition half.

They were then faced with a block of seven players: four defenders and three midfielders. Meanwhile, the three Paris strikers played a higher line. The counters also arrived rather quickly but did not end with shots (in the 11th and 17th minutes). With the exception of these two dangerous moments, OL kept a certain balance. In midfield, Tousart and Ndombele did a lot of work to cut out transitions and fill the gaps that could exist after losing the ball.

A look at Lyon’s PassNetwork and PassSonar show how important Ndombele was. This importance increased even more with the expulsion of Tousart. On the PassNetwork we can see how Ndombele takes the exact position of his teammate. 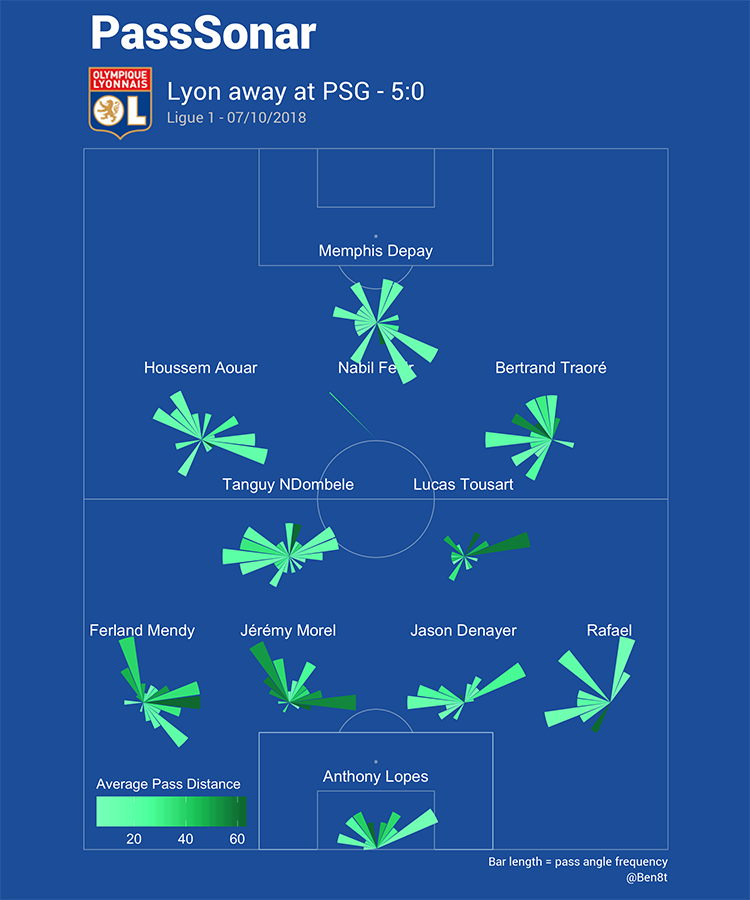 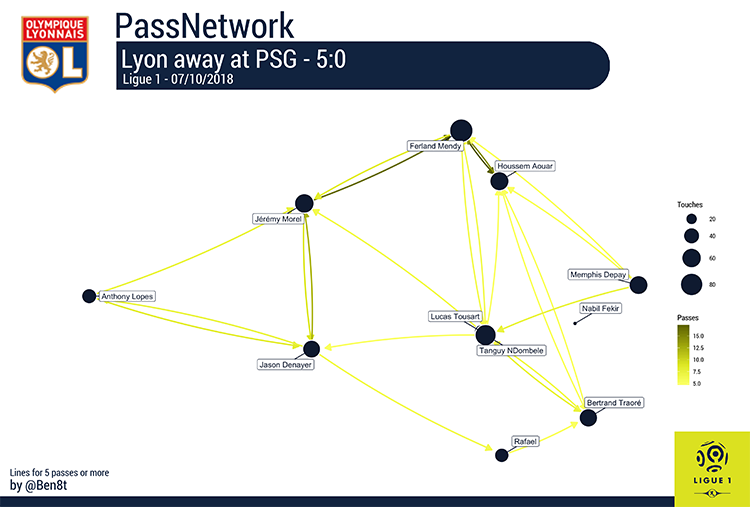 The lack of Lyon creativity

In summary, Lyon had control of the ball and managed to settle easily in the opposition half. Their only missed opportunities are where the problems started for Lyon. Despite their relative dominance, they did not manage to get real opportunities until Denayer’s header from Memphis’ free-kick shortly before the break. At half-time, the two teams had a similar xG: 0.87 for PSG (including 0.76 with the penalty), 0.86 for OL (including 0.46 for Denayer). On their eight other shots, les Gones had therefore created only 0.40xG. They had very little hope for an equaliser bar a moment of individual brilliance.

As is often the case, Bruno Genesio’s players went a long way to get into the final third. The most interesting situations came from attacking down the channels through Rafael (after 11 minutes) and Mendy (19 minutes). Each time, however, the Parisian defence knew how to remove the danger. In total, Lyon centred the ball 14 times in the first half for only one real moment of danger in the box: the header from Denayer in the 41st minute. Apart from that, there was nothing to report. Depay played the majority of his balls as a pivot. Traore and Cornet were almost exclusively stuck on the touchlines.

Another concern was the management of transitions. On several occasions, Lyon managed to kill balls that could have turned into counterattacks. But unlike PSG who changed pace and attacked spaces at the slightest opportunity, Lyon remained at the same tempo. This spoiled promising situations at the start of the transition with numerical equality and thus prevented themselves from making the difference in advanced areas.

Obviously, the premature exit of Fekir weighed heavily on the creativity of the team. Forced into crossing to threaten, a player like Dembele could perhaps have brought more impact to the danger zone. Admittedly, however, this would have also given the team a defensive balance. Depay would certainly have returned to the flanks of a 4-5-1 and remained less hardworking than Cornet or Aouar. Still, at the break, les Gones were still ahead. The Parisian defence relied on Thiago Silva during the few moments where they found themselves in trouble.

Tousart had guaranteed the balance of the team until then. He had to leave his teammates after receiving a second yellow card in the 44th minute.

When Neymar and Mbappe were rolled out

After the break, Lyon adopted a 4-4-1 against PSG’s 4-3-1-1 with Neymar in support of Mbappe. After Rafael’s injury, Bruno Génésio decided to keep his third change for later. His hope was that the Aouar-Ndombele pair would be enough to maintain control of midfield and especially cut the relationship to Neymar. It was a bad decision.

In the 47th minute, the Brazilian escaped behind Ndombele, released by Verratti’s pass, and launched Mbappe deep. The former Monaco man stumbled into Lopes but the Lyon goalkeeper only delayed the inevitable.

Because even though Lyon managed to create two opportunities in the aftermath to level the game through Cornet in the 48th and 52nd minutes, their midfield was not strong enough to support a block team that high up the field, as well as control Neymar between the lines. Aouar and Ndombélé never worked as a pair in the middle, totally exposing the central defence.

On the other hand, a 4-3-2 was made to find vertical solutions, first of all towards Neymar and then from the Brazilian to Mbappe. The numbers speak for themselves: before the break, Verratti could only give four balls to his playmaker, the same for Marquinhos. After the break, the passes to Neymar substantially increased. Twelve passes came from Verratti and nine from Marquinhos. Most were forward, and releasing the Brazilian between the Lyon lines.

A look at Paris PassSonar highlights the good performance of Verratti in a role where he excels. 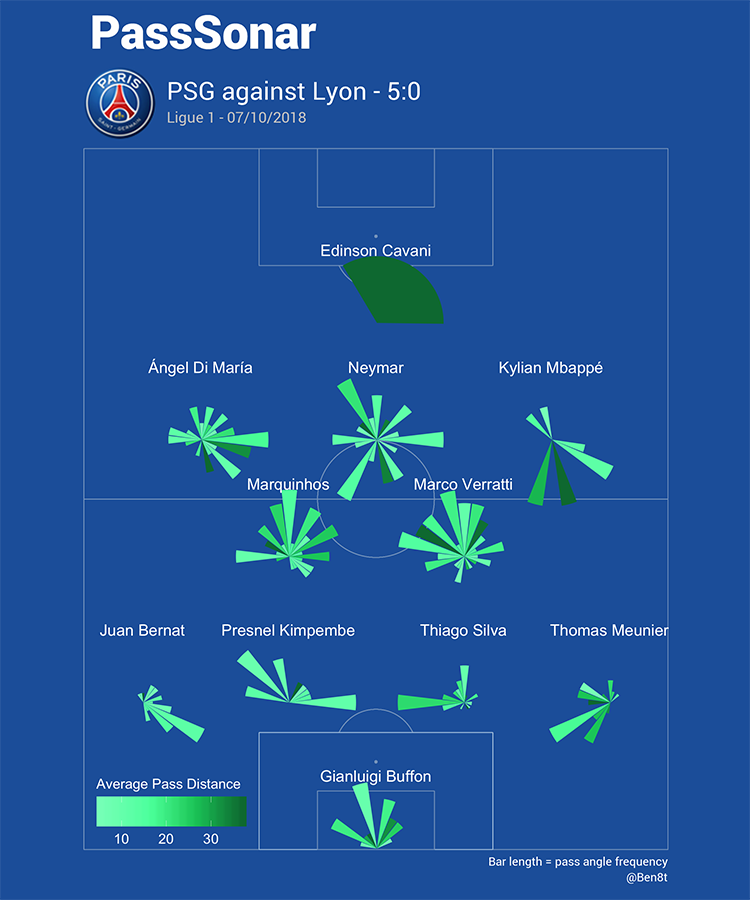 This first relationship led to a second one: from Neymar to Mbappe. In the line of his first pass early in the second half, the Brazilian multiplied the offerings to his advanced striker who had taken advantage of spaces in behind the Lyon defenders.

From half-time onward, the passes by Neymar to Mbappe rose from two to eight, including four openings in behind the defence. And after three missed chances before the hour mark, the French world champion finally punished Lyon with four goals in just 13 minutes.

Mbappe had nine shots with 2.80 xG, six deep through balls to Neymar, including two key passes and an assist.

Nine wins in nine games, 32 goals scored, and just six conceded. It was an idyllic Ligue 1 debut for Thomas Tuchel and his PSG side. Facing Lyon, the Parisians have passed their first real test, which was not unlike some performances under Unai Emery last season. PSG suffered if you believe the words of Tuchel in the press conference. His players have managed by relying on Thiago Silva in the most complicated moments and the Neymar-Mbappe strike-force in attack.

For this Lyon side, we will probably wonder what would have happened while they dominated possession if Fekir had stayed longer in the game. His absence made Lyon very predictable, passing almost exclusively down the flanks. The bold choice to keep the same block height when it became 10 against 10 quickly proved suicidal. The chances missed by Mbappe at the start of the second half should have served as warnings but no change was made before the inevitable goals. Failing to have real solutions on the bench, Lyon could at least have tightened up. Admittedly, the equaliser would have been even more complicated to get but the manner of the defeat would have been far less severe.