Inter is one of the biggest clubs in Europe, never mind Italy, and they have finally returned to the Champions League. Going into the 2018/19 Serie A season, Inter have strengthened their squad and looks set to challenge Juventus for the title. In this piece, I look at their summer recruitment and how they might set up. Of course, there’s also tactical analysis of Inter’s style of play.

Luciano Spalletti continues on the Inter bench after successfully guiding the club back to the Champions League last season. It will be Inter’s first season in Europe’s finest competition since 2010/11. That season they were defending champions; this season they will be an underdog. Spalletti has a decent record in Europe and should do well enough. In Serie A his tactics have shown to work well but he is yet to win a Scudetto. The hope at Inter is this year might be the one.

Sporting director Piero Ausilio has had a brilliant summer and strengthened the team and squad in all areas of the pitch. Incredibly, he’s even managed to turn a profit so far. Players like Radja Nainggolan, Lautaro Martinez, Stefan De Vrij, Kwadwo Asamoah, Sime Vrsaljko and Matteo Politano has come in at Angelo Moratti Sports Centre. The total cost? €72.5m. They have sold previously loaned out players like Geoffrey Kondogbia and Yuto Nagatomo, squad players like Davide Santon and Eder as well as a bunch of young players for a total of €72.7m. That is tremendous business from Ausilio. With the new players coming in, Inter looks ready to challenge for the Scudetto if they can balance the league with European football.

Tactical analysis: How will Inter play?

Inter normally sets up in a 4-2-3-1 formation which becomes 4-4-1-1/4-4-2 in defence. In Serie A last season they also started to shift towards a fluid shape which saw one winger move inside to create numerical superiority in midfield. We’ll look at this later. Spalletti’s game plan focuses on progressing the ball forward quickly through vertical pass combinations. He uses the classic “up-back-through” which means a pass is played forward then returned backwards before played through an opponent line. The attacking play last year was extremely wing-focused with Ivan Perisic and Antonio Candreva the key players down either side. The pair would then look for the devastating striker Mauro Icardi with crosses, often hit low and hard. Perisic also repeatedly makes movements towards the back-post when Candreva prepares to cross from the right.

One problem Inter often encountered was that their attacking structure became very static and rigid. When opponent’s figured out how Inter played they often dropped low and Inter lacked ideas to break teams down. The players remained in their positions and looked to the wing-players for chance creation but every opponent was ready for this. Inter endured a quite long slump from mid-December onward as they fell from top of the league to fifth. Spalletti then made some important changes. The signing of Rafinha gave the coach a creator centrally behind Icardi and gave Inter another option than just simply attacking down the wings. Spalletti also trusted the bit-part player Marcelo Brozovic as his playmaker in central midfield. The Croatian flourished and was Inter’s best player in their push for fourth. Lastly, Spalletti made the team more fluid in possession by changing the rigid 4-2-3-1 into a 3-2-4-1 in attack. The new team structure in attack can be seen below. 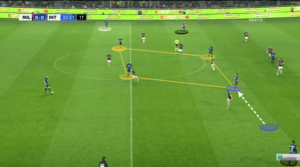 As you see in the above image, Candreva (blue) would move inside from the right wing and position himself in the right half-space. Rafinha would move across slightly towards the left and the double pivot of Gagliardini and Brozovic helped create a midfield box centrally. The left-winger Perisic (black) kept width on the opposite side where the left-back, often D’Ambrosio (white), stayed deeper with the centre-backs. The right-back Cancelo pushed into the space vacated by Candreva’s inverted movement. This fluidity created issues for opponent’s as Inter recovered their top-four spot, but only in the last game of the season.

Inter were solid in defence throughout the season, conceding 30 goals in the league. That made them the fourth best defensive team, despite suffering injuries to important defensive players. They often defended in a mid-block where the front-duo would initiate the press ahead of two solid banks of four. The defence and midfield kept a compact shape and forced opponents wide, as seen below. 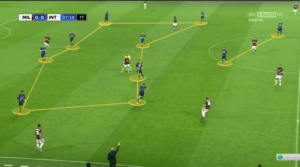 They were often very comfortable when defending deeper areas in a low-block as their positionally-orientated defensive system gave them stability. In certain games, Spalletti opted to press high and followed the Serie A trend of man-orientated pressing where the forwards and midfielders focused on a direct opponent to mark when pressing.

It all depends on which formation Spalletti opts for. In his tried and trusted 4-2-3-1 the below graphic illustrates a possible team. Samir Handanovic is the undoubted number 1 in goal. The signing of Vrsaljko at right-back is an obvious upgrade on last season. The Croatian is a superb addition. The arrival of De Vrij means Inter now have three fantastic centre-backs with the Dutchman joining Milan Skriniar and Miranda. If Spalletti goes with two, De Vrij will probably start on the bench. Asamoah will compete with Dalbert for the left-back slot, with his experience sure to be the decisive factor for Spalletti.

Gagliardini and Brozovic found a really good partnership towards the latter end of the campaign and likely means they start as Inter’s duo in midfield. Matias Vecino is another really good option. In fact, Vecino might benefit from Brozovic late arrival due to his Croatia reaching the World Cup final. Either way, the three are great options to rotate between. Nainggolan is a fantastic signing but he will likely start higher up, in the number 10 role where he enjoyed a remarkable 2016/17 under Spalletti at Roma. Another option for the number 10 role is the new Argentine Lautaro Martinez who has looked fantastic in pre-season. But he would likely start from the wing in the inverted role Spalletti introduced last year where the shape changes into 3-4-2-1 in possession. Martinez is one option for a wing spot but Spalletti trusts Antonio Candreva and Ivan Perisic a lot so it will be interesting to see how he sets the side up. One thing is certain; Mauro Icardi will start up front. 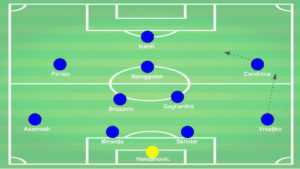 That is a fantastic team, but a more attacking option would be to utilize the quality they have signed by going 3-4-2-1 as their default setup in Serie A. De Vrij would come into defence, Vrsaljko and Perisic would be wing-backs and the Gagliardini-Brozovic double pivot would remain. Martinez and Nainggolan would then act as second-strikers behind Icardi. That side might not be defensively suited for big European games, but would blow away most of the opposition in Serie A. 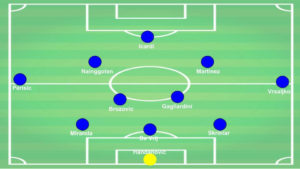 Whichever way Spalletti sets up his team, Inter look great going into the season. Optimism is high and rightly so; this is their best squad since the treble winning season and they have finally returned to the Champions League. The stunning transfer window has added depth as well as quality and Inter can be flexible with both formations and players. They can dominate the ball or counter-attack. They can defend low or press high. This will be a very exciting season in the black and blue half of Milan. 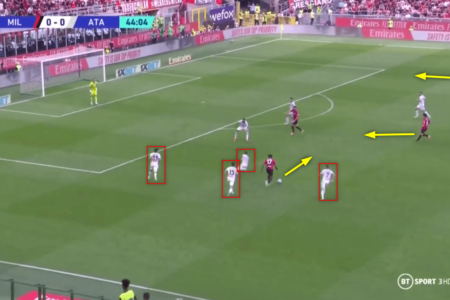