Porto faced Roma at the Estádio do Dragão in the second leg of their Champions League round of 16 tie. In the first leg Roma picked up a 2-1 victory. This was a respectable result but the away goal that Porto managed to grab in Rome would prove pivotal in the second leg.

In this tactical analysis we will look at how Porto were able to overturn a first leg defeat and secure a 3-1 victory. This result takes the Portuguese champions through on away goals and into the Champions League quarter-finals. 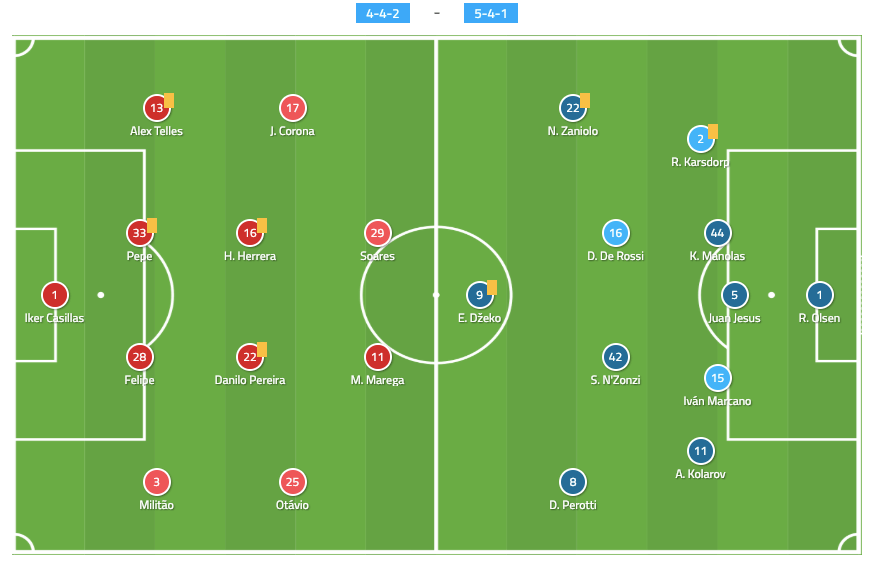 Porto lined up in a 4-4-2, but it was a more unorthodox set-up than the initial lineup would suggest. Fans of English football will see great similarities between Porto’s style of play and that of Watford. Otávio and Jesús Corona are responsible for drifting inside and taking up dangerous positions in the half-spaces between Roma’s midfield and defensive line. In possession Porto’s set-up is more of a 4-2-2-2 with the attack spearheaded by Moussa Marega and Tiquinho Soares.

Alex Telles offered width for Porto with Os Dragões often looking to overload the left hand side of their attack. Eder Militão offered a bit more balance as he was slightly more reserved than Telles. The attacking play of Porto was supplemented by the solid midfield pairing of Danilo Perreira and Héctor Herrera.

Roma set-up in a 3-4-3/5-4-1 for only the second time this season and for the first time in the Champions League. When Roma last lined-up in a 3-4-3 the team was very different. The most notable difference between the two 3-4-3 line-ups of Roma is that neither Edin Džeko nor Diego Perotti played in its previous outing.

Instead Eusebio Di Francesco lined-up with Cengiz Ünder and Patrick Kluivert supporting Nicolò Zaniolo who played through the middle in a much more fluid set-up. In this iteration of the 3-4-3, Roma were much more static in their set-up. The side looked for direct balls into the chest and head of Džeko and looking to play off knockdowns.

One of Porto’s major strategies to overcome their first-leg deficit was to overload the wide areas of the pitch. This was in order to exploit the space between Roma’s wing-backs and wide centre-backs particularly between Karsdorp and Konstantinos Manolas. 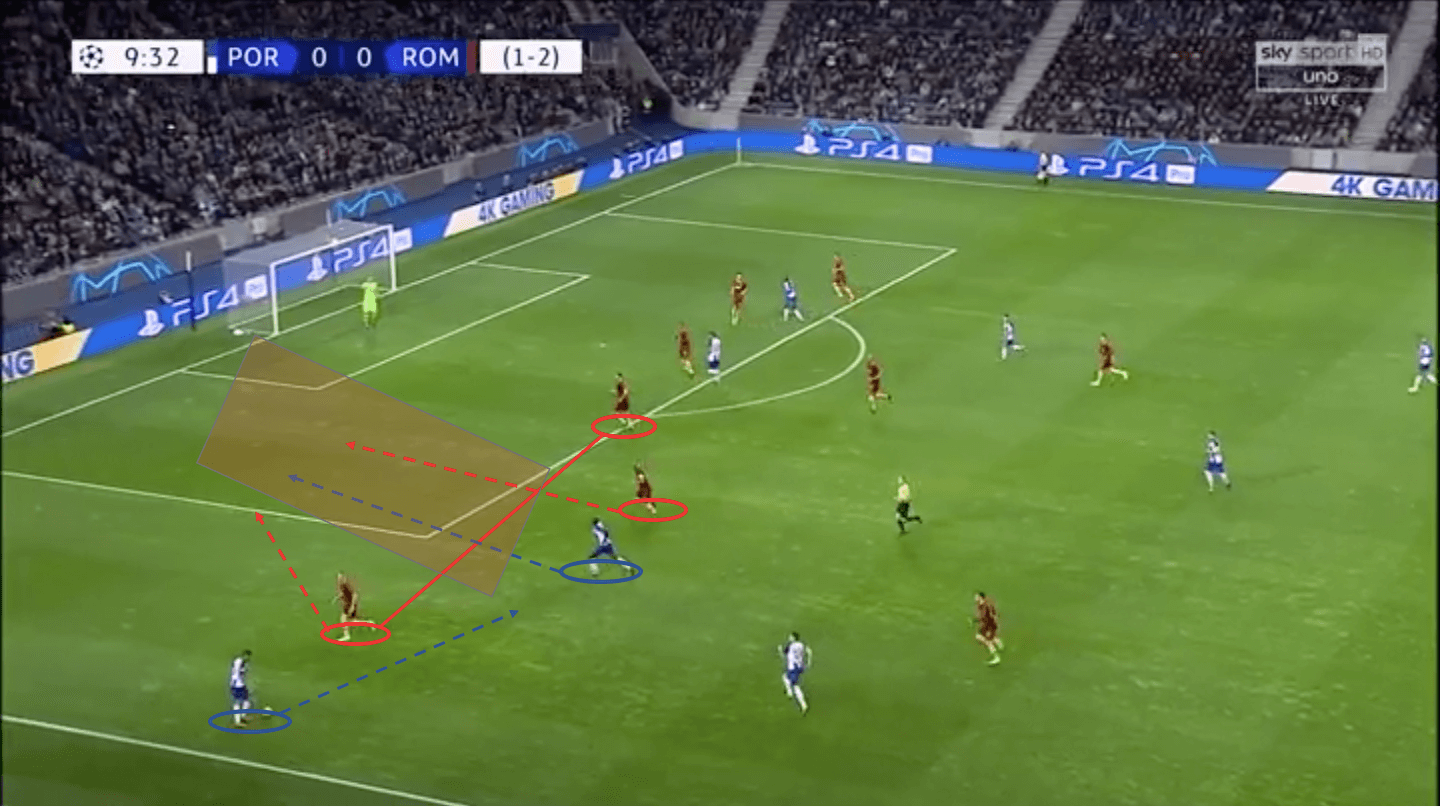 This strategy was clear from the early moments of the game. In the image above Danilo Perreira makes a run into the half space between Manolas and Karsdorp. The space between the two Roma defenders here is massive and as a result De Rossi has to track the run of Danilo. Karsdorp also feels as though he has to back-peddle to cover the space.

The Roma defenders, while not in a brilliant shape, have clearly recognised the danger. If Danilo gets the ball in the red space they will be in trouble. However, De Rossi and Karsdorp over-compensate. As a result the middle of the pitch becomes completely vacant. This allows Corona to cut inside and drive towards the box. Following a strike on the edge of the area by Corona the ball falls to Telles in the box who gets a strike on goal that goes narrowly wide.

It was somewhat fortuitous that the ball fell to Telles in the box. But Roma will have been worried by the ease at which a very skilled dribbler and capable shooter in Corona was able to drive towards their box and shoot from a dangerous position. In the image below a similar picture is unfolding just three minutes later. 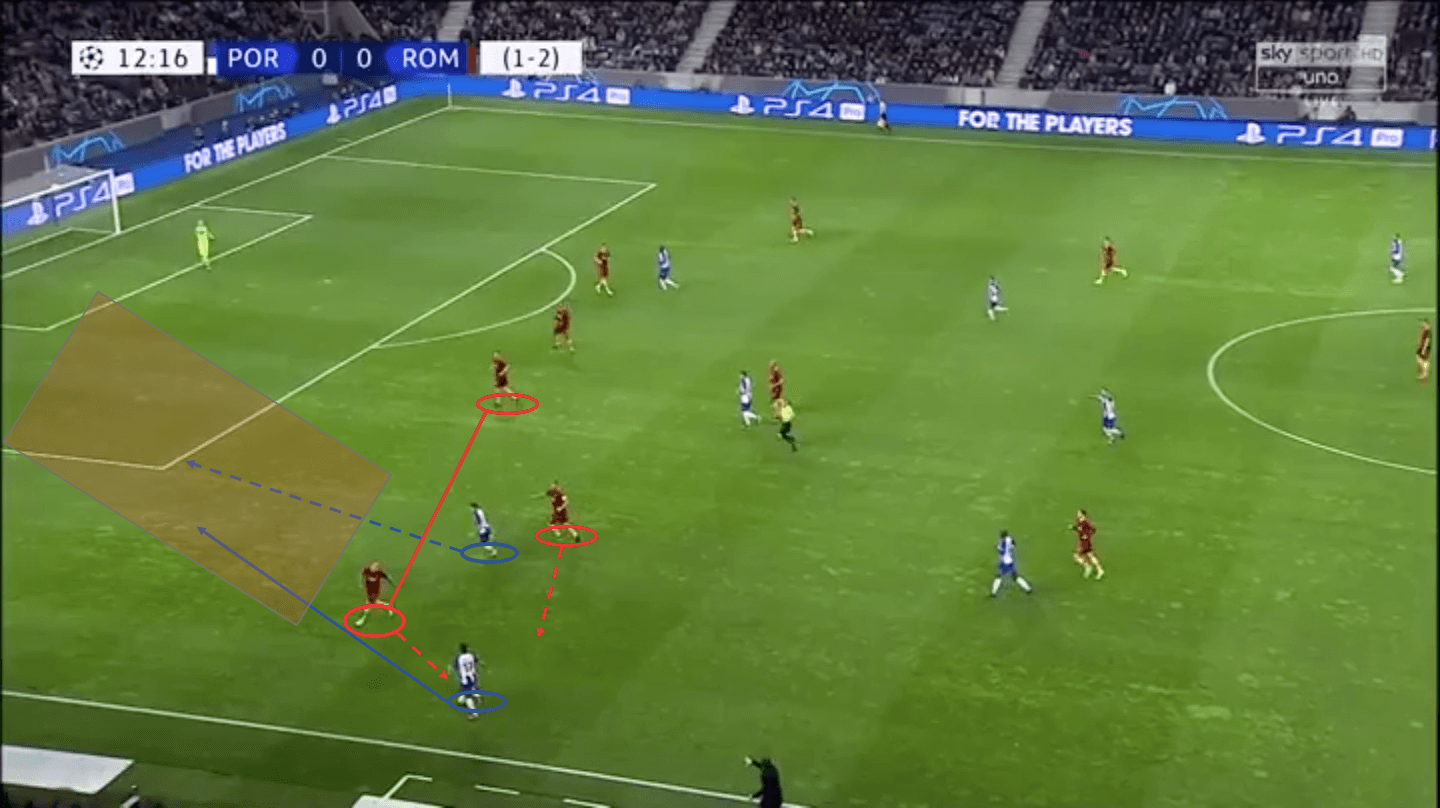 Corona again has the ball at his feet. This time however, Alex Telles is underlapping in the space between Karsdorp and Manolas. With the danger of Corona cutting inside and attacking the box clearly in the minds of De Rossi and Karsdorp, both men close down Corona. This leaves Telles free to run into the half-space. Manolas moves to cover the space but Telles is able to get a dangerous ball into the box. 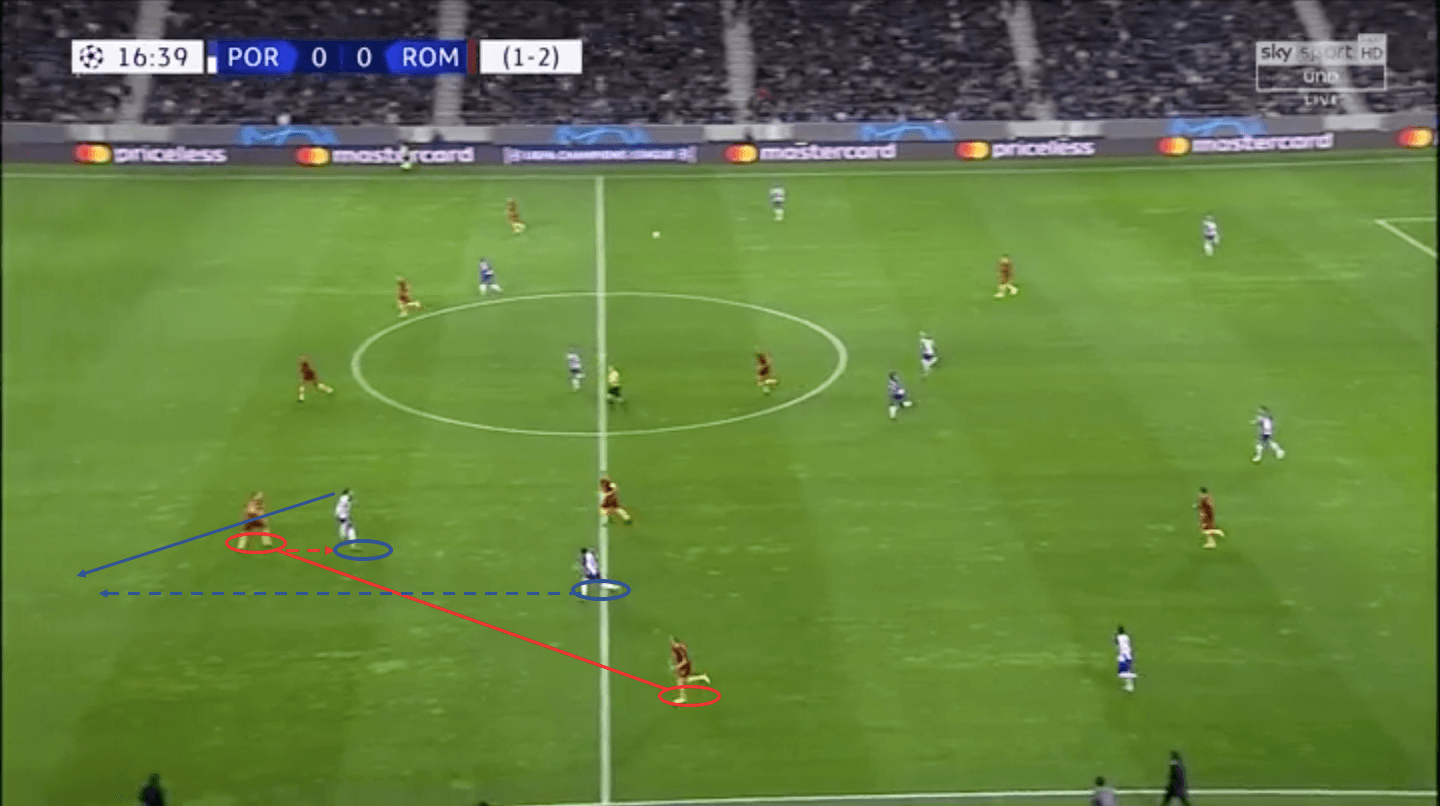 Above is an example of Porto overloading the left attacking channel but this time from a goal-kick. Karsdorp has over-pressed Alex Telles in the left-back position. As a result the space between him and Manolas is again too large. Soares wins the flick-on for Porto and Corona can accelerate into the space behind the Roma defensive line. 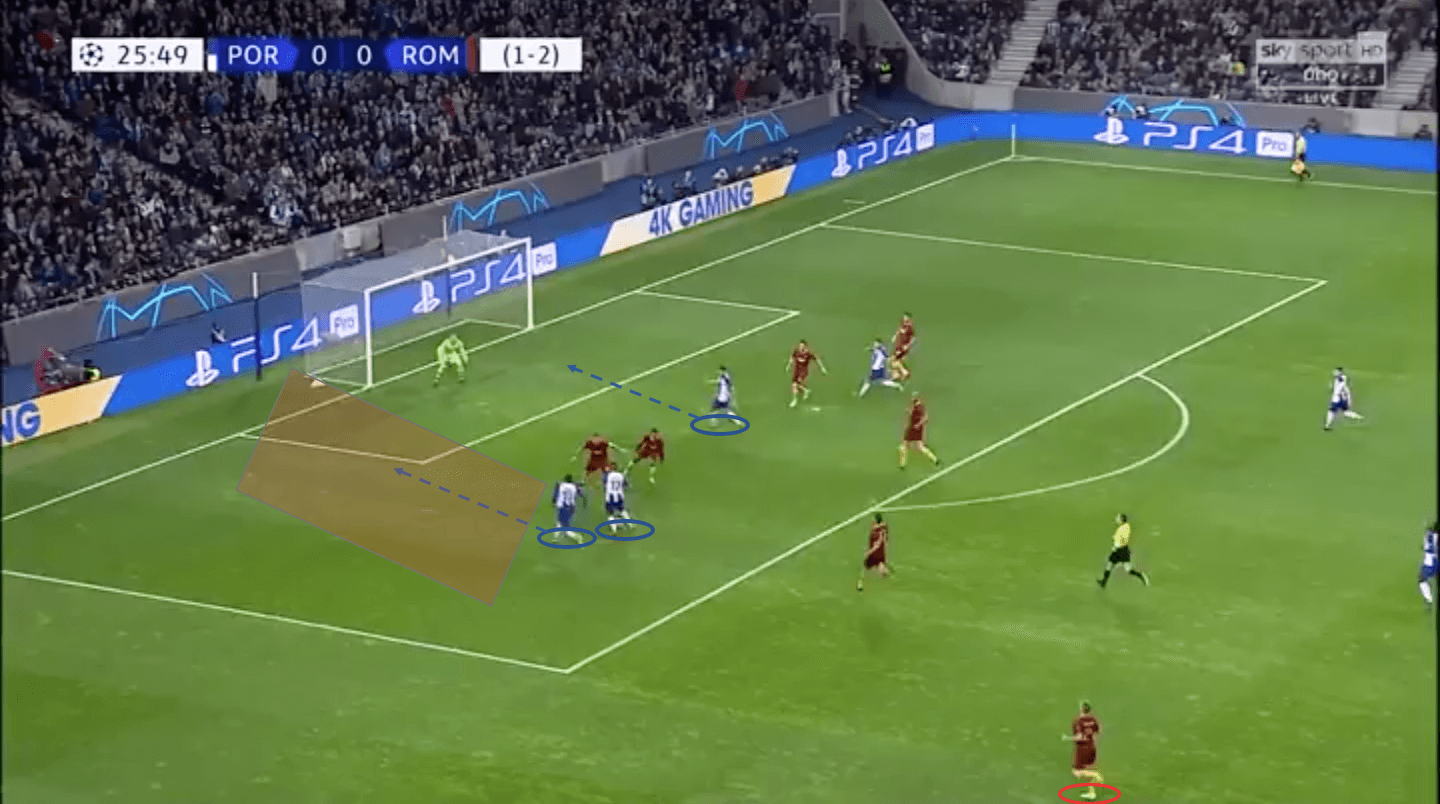 Porto were getting behind Roma at will down the left-hand side and eventually it was going to tell. Marega does some good defensive work for Porto as he chases down Manolas when he attempted to dribble into Porto’s half. Porto win the ball back and attack with speed. Karsdorp (red) has again found himself out of position and as such Marega and Corona are able to work a numerical advantage in the left-hand side of the box.

Marega overlaps the Mexican winger into a dangerous position and can easily cut the ball back to Soares who is unmarked in the centre of the six-yard box. The goal was very much reminiscent of the kind that Manchester City score on a regular basis.

Porto continued to try to exploit the wide channels of Roma’s defensive five. In the below example, both Marega and Soares are looking to take advantage of Iván Marcano and Juan Jesus’ inexperience in a back three. Marcano is all at sea and doesn’t know whether to drop off and try to intercept or to press Otávio. Porto have moved into a dangerous area leading to a shot by Marega being tipped wide by Olsen. 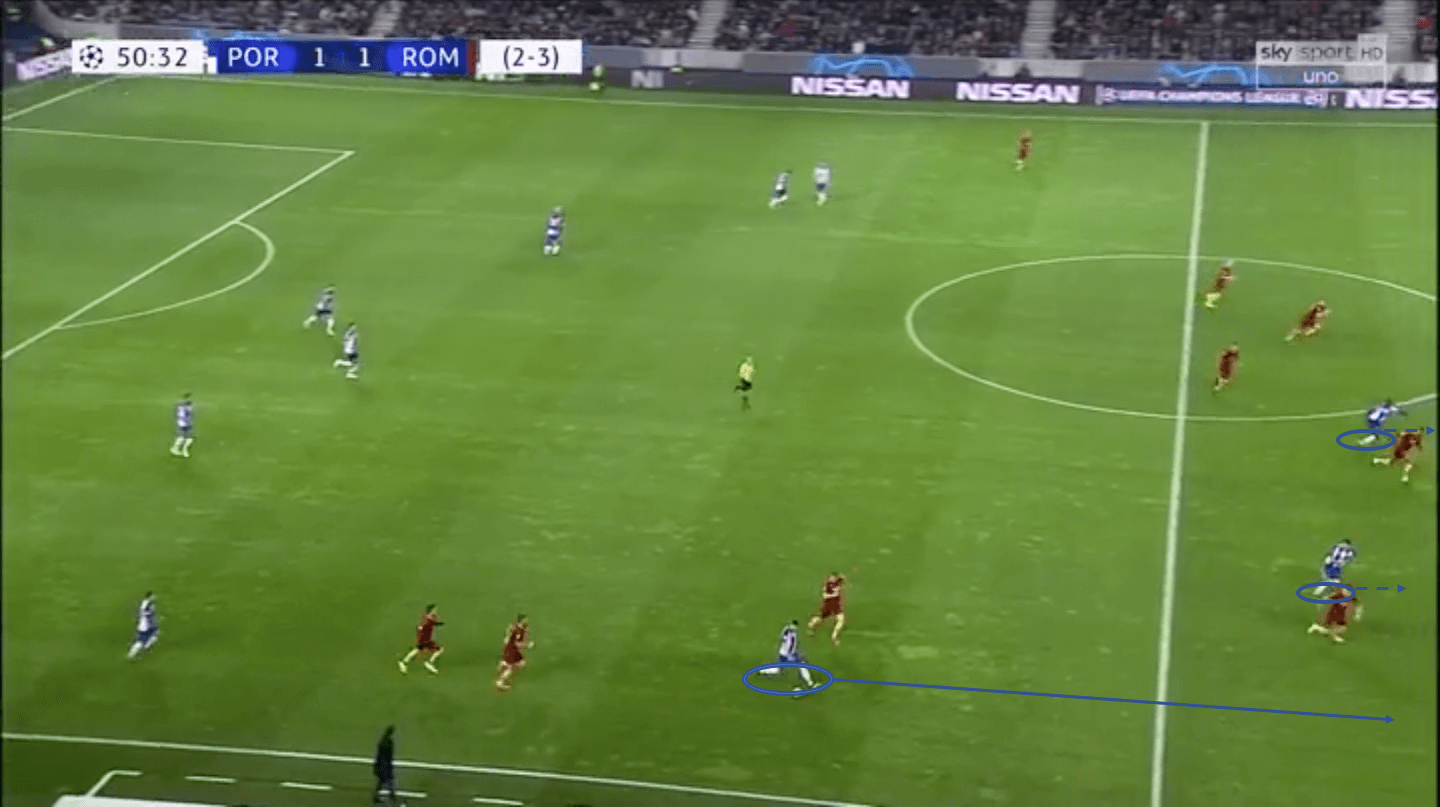 Throughout the game Porto’s front four caused Roma’s defensive five problems, whether that be overloading half-spaces with Corona and Otávio cutting inside, Marega and Soares dropping off into space to pick the ball up, or loading the box full of attackers in one-on-one situations. Below is an example of Marega dropping into the half-space with support nearby. 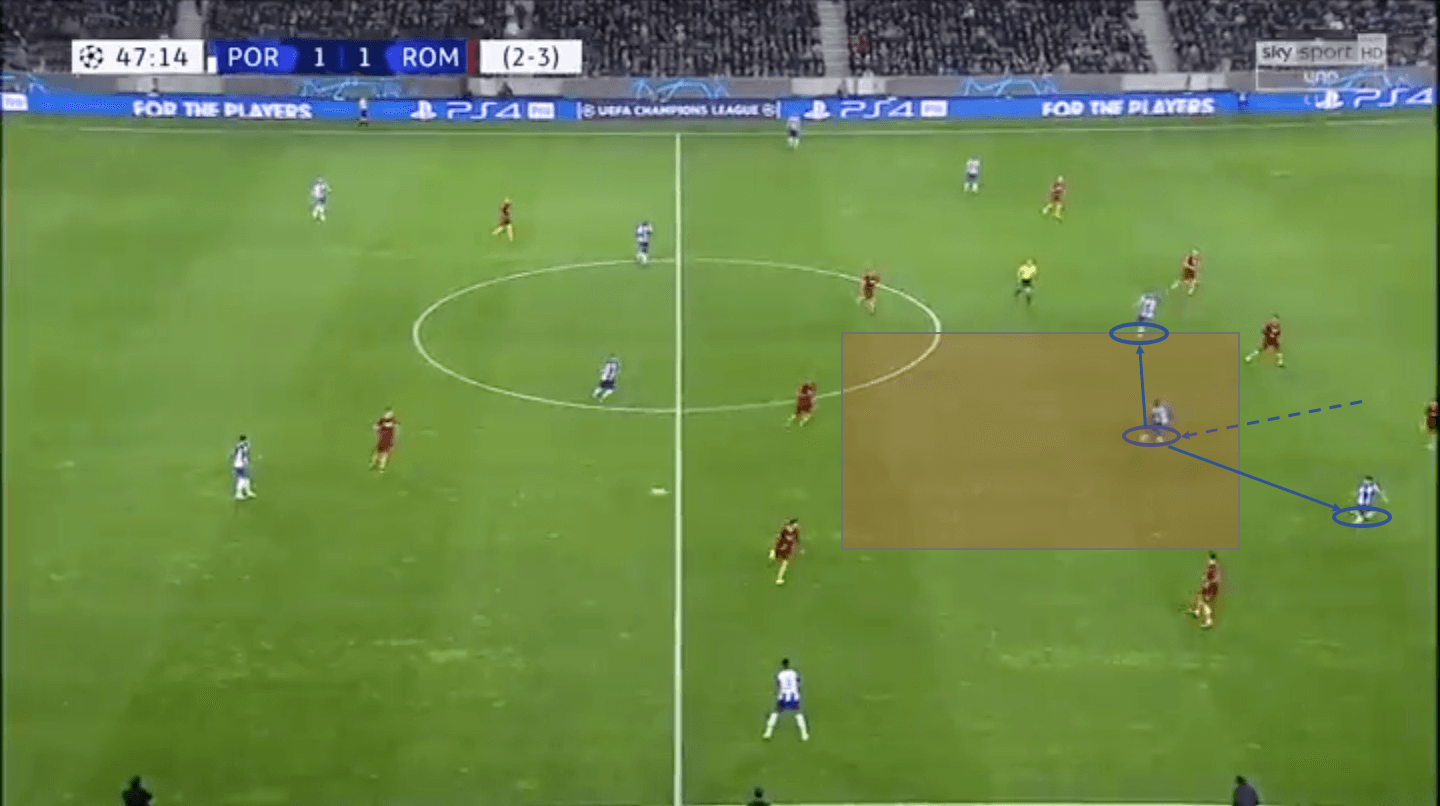 Felipe finds Marega with a line-breaking pass. The Porto frontman immediately has three options around him without a Roma defender in sight. He can drop the ball off to either Otávio or Soares or he can turn and dribble. The move eventually fizzles out but this was a situation that caused Roma defensive headaches throughout.

When playing against a back three/five it is vitally important that the forwards don’t become isolated due to the numerical advantage. Playing with two central strikers who are supported by two wide players a team can negate this numerical advantage. This is exactly what Porto did. 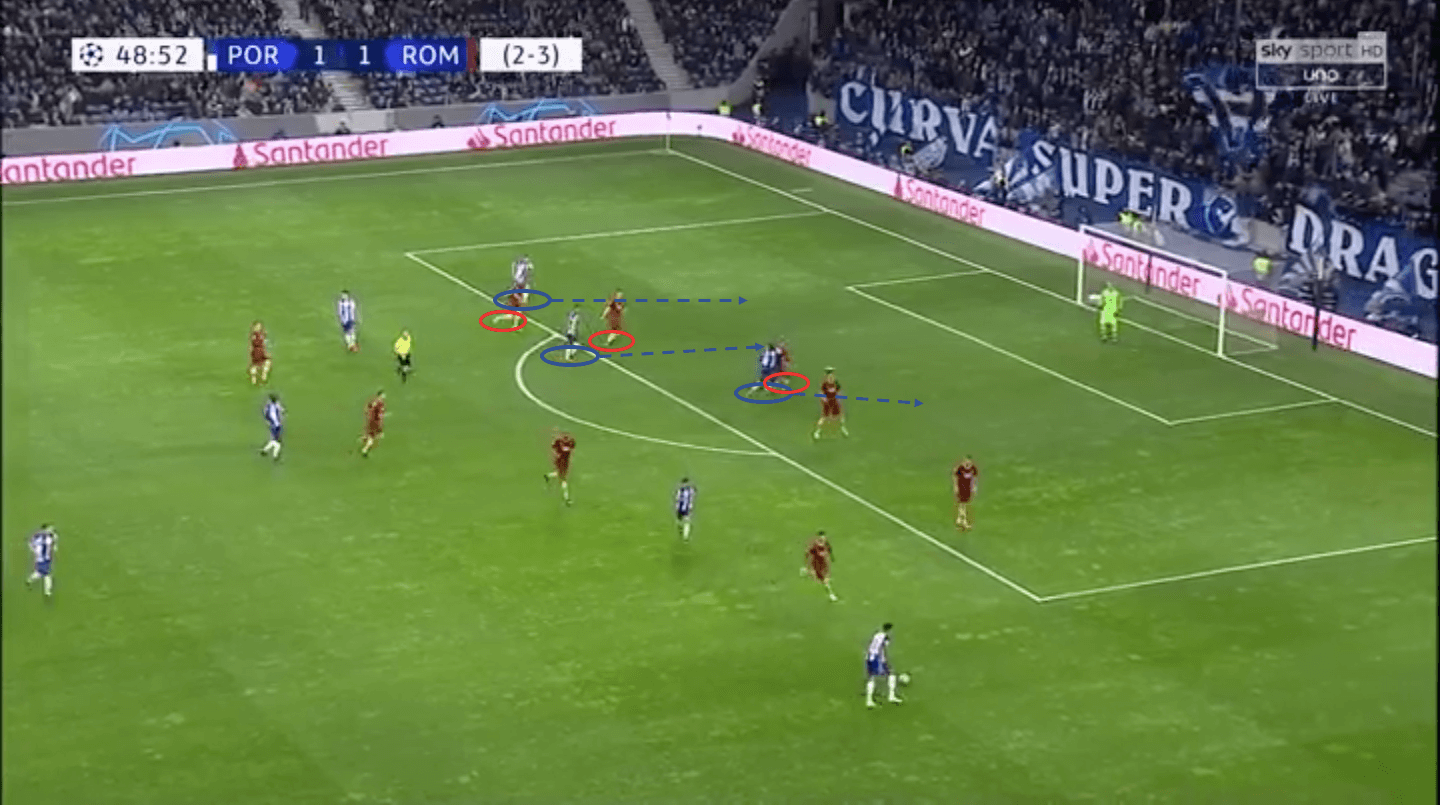 Time after time Porto were able to load the box full of attackers and look to work one-on-one situations in the box. In the example above they do this which leads to Soares putting a close-range header over the crossbar at the back post. 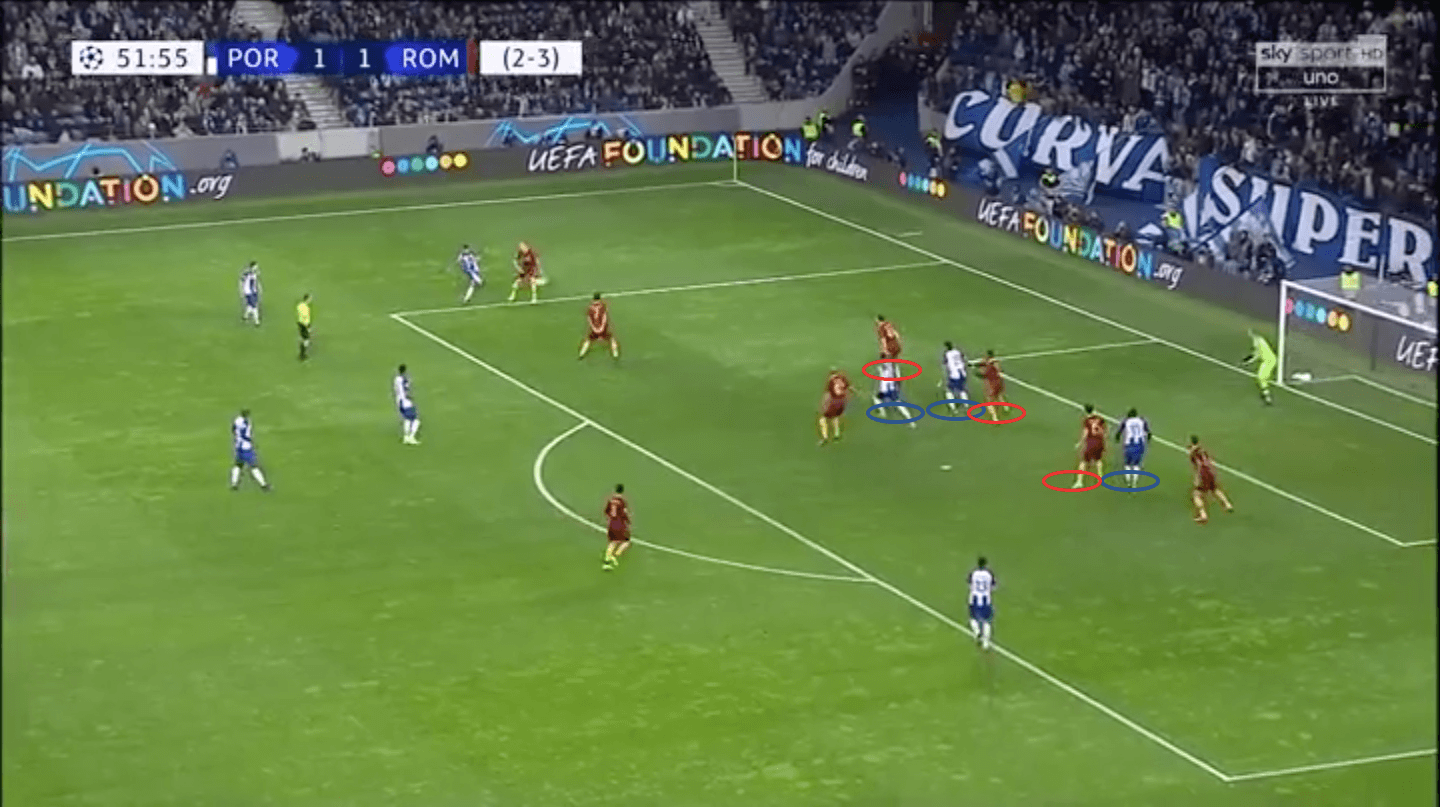 A very similar situation is depicted above. This time Marega is the player operating at the back post. With a lot of attacking players in the box, Porto made it much more difficult for Roma to mark their men effectively but also it gave the crosser a number of targets to hit.

In the example above, Porto drag the Roma defenders to the near post. The Porto crosser sees this and puts the ball towards the back post. The unmarked Marega taps in from all of two yards to level the scores.

The penalty that lead to Porto’s winner came in almost exactly the same manner. Porto again have 3v3 in the middle of the box. The two attackers close to the ball make runs towards the front post whilst Fernando attacks the back post. The crosser has a number of options to pick out. He drives the ball across the six-yard box. In a moment of panic Florenzi grabs the shirt of Fernando who has the run on him, and following a VAR review the penalty is given. 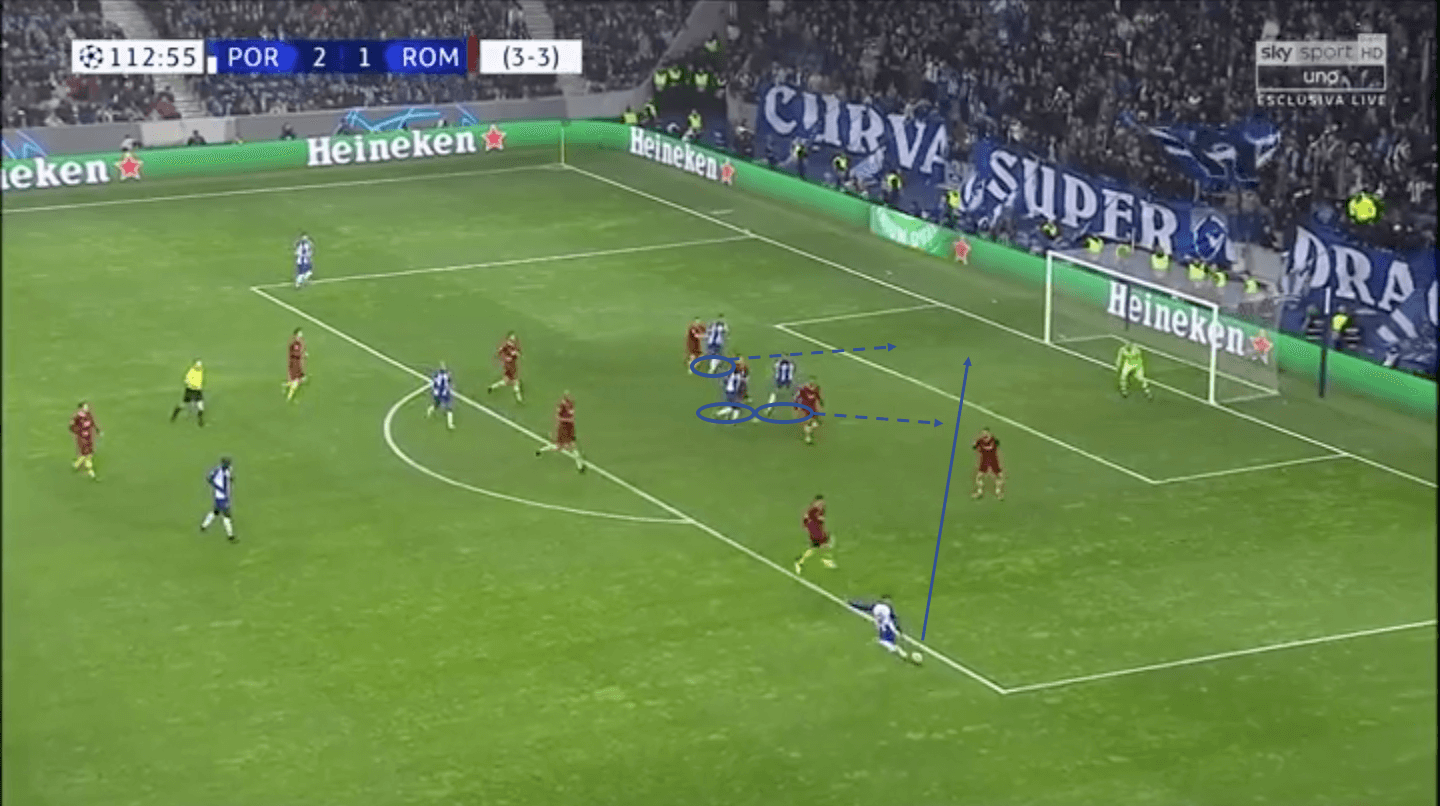 Roma fail to show up at the most important time

Roma put in a really disappointing performance in this game.  What was most disappointing about their performance was their terrible use of the ball throughout the game. Registering 40% possession away from home in the Champions League isn’t a disaster, especially given Porto’s strength at home.

However, this lack of possession didn’t come from a relentless press on Porto’s behalf but from poor decisions on the ball. Roma completed 75% of their passes which again isn’t that bad. However, they only completed 67% of their progressive passes and only 51% of their long passes.

Edin Džeko’s threat was completely nullified by Porto’s centre-backs, which further highlighted Roma’s bad use of the ball in this game. Džeko received 10 passes completing only nine of his own. When your main focal point is this isolated for 120 minutes you are going to run into trouble. The example below stood out as an example of Roma’s poor use of the ball. 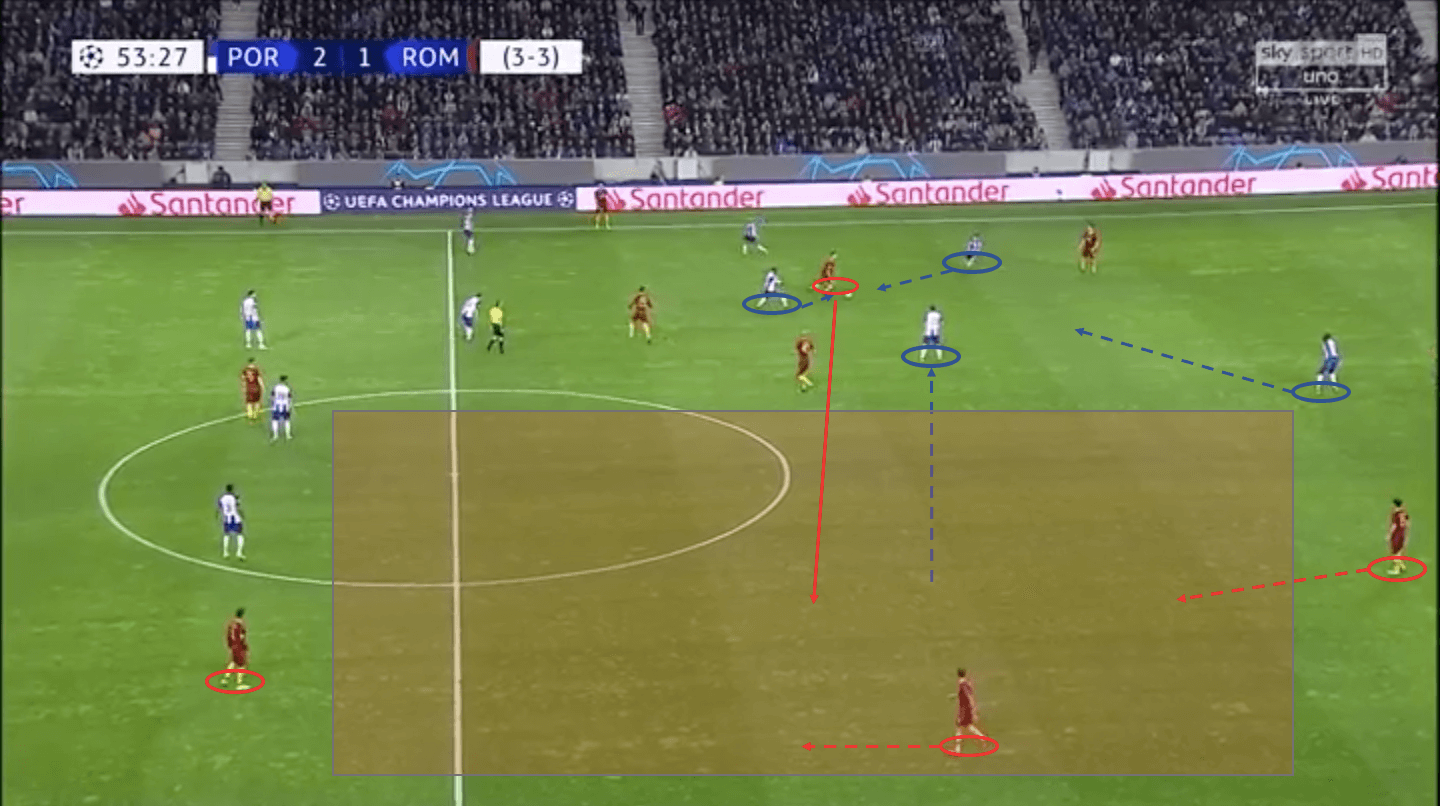 Porto are working to press the ball carrier of Roma. However, it isn’t a hugely intense press from Porto and the Roma midfielder has time to pick his head up and find a teammate. Otávio has moved inside to press leaving acres of space down Roma’s left-hand side. Marcano, Kolarov and Perotti are all in a position to attack an isolated Militão.

Initially, the Roma midfielder is facing the space and with a simple cross-field pass could unlock this space. However, he turns back towards the pressure and looks for Džeko via a long ball into the channel. The centre-backs isolate Džeko. Even if he had received the ball he wouldn’t have had too many options.

In a match that somewhat got lost in the shuffle given the exploits of Ajax vs Real Madrid and Manchester United vs PSG on Tuesday and Wednesday, Porto gave another impressive and effective performance to quietly work their way into the latter stages of the Champions League. With a deep run into the elite European competition, Sérgio Conceição’s already high stock will continue to rise with his clever use of overloads and half-space occupation.

For Roma, this is a disappointing result. Following the valiant effort against Liverpool in last season’s semi-final this is a far cry from that. As I am writing, Di Francesco has been relieved of his job in Rome and given the level of performance against Porto it isn’t all that surprising. Roma now find themselves managerless and in a hot race for the final Champions League spot in Serie A. It’s beginning to be a season to forget in the Italian capital.