Paris Saint-Germain welcomed Manchester United to the Parc des Princes for the second leg of their round of 16 matchup in the UEFA Champions League. The Parisians won the first leg in Manchester 2-0, and were widely expected to advance to the quarterfinals. None of the previous 34 teams to have lost the first leg at home by two goals had ever advanced in the Champions League.

With the visitors missing 10 first team members, the Red Devils needed to get off to a good start to have any chance of overturning the deficit from the first leg. A poor back pass by Thilo Kehrer, which Romelu Lukaku seized on, gave Manchester United their first goal within 111 seconds.

PSG were able to restore their two-goal lead on aggregate in the 12th minute when Juan Bernat, who was tearing United apart on the left side, tapped in a Kylian Mbappe cross. However, Gianluigi Buffon spilled a Marcus Rashford shot from distance, allowing Lukaku to tap home in the 30th minute.

This meant Manchester United needed only one more goal to advance. PSG became extremely nervy as their collapse two years earlier against FC Barcelona seemed to weigh on them. Unfortunately for PSG, they repeated the collapse when Presnel Kimpembe gave away a foolish hand ball in the 89th minute, allowing Academy product Marcus Rashford to score his first penalty for Manchester United, putting the Red Devils through on away goals. 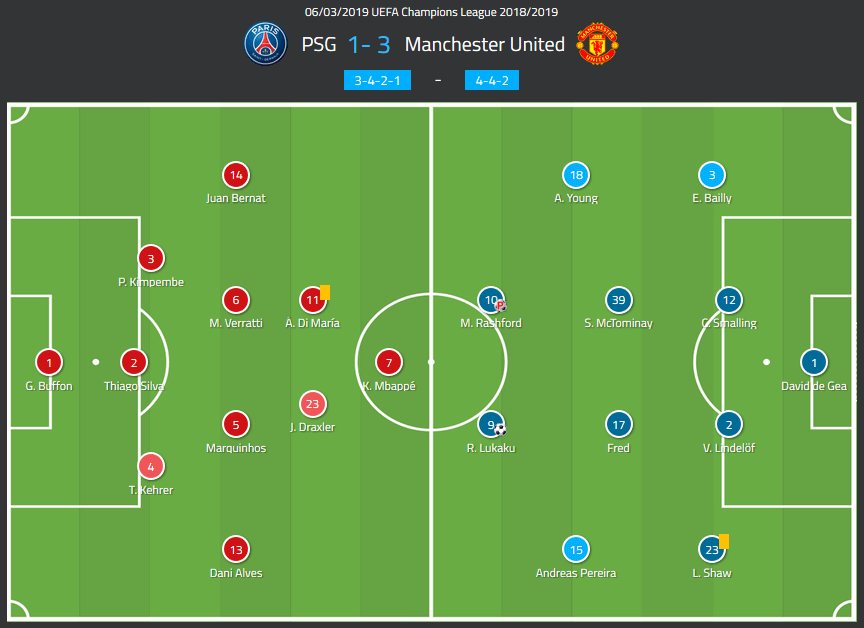 With 10 first-team players missing this match through injuries or suspensions, Ole Gunnar Solskjaer was forced to make major changes over the side that had lost 2-0 at home to the Ligue 1 champions. Without his entire first-choice midfield, he switched to a 4-4-2 as his side needed at least two goals to have any chance of advancing. Lukaku and Rashford started up front, while the midfield line consisted of Ashley Young, Scott McTominay, Fred, and Andreas Pereira. Chris Smalling started alongside Victor Lindelof, and Eric Bailly moved to play at right back.

Thomas Tuchel made no changes to personnel or system over the side that had dominated Manchester United at Old Trafford. Missing former Barcelona player Neymar, and with Edinson Cavani only healthy enough to start on the bench, Kylian Mbappe got the start as the lone striker. Supporting Mbappe was former United player Angel Di Maria and Arsenal target Julian Draxler.

In this tactical analysis, we will look at how Manchester United converted 32% possession into three goals, through their defensive organisation and the changes Solskjaer made to improve their structure as the match went along. We will also examine the troubles PSG had breaking down United’s low defensive block.

In the first leg of this tie, Manchester United played a 4-3-3 with their first-choice lineup. The midfield consisted of Nemanja Matic in the holding role, supported by Ander Herrera in a defensive box-to-box role and Paul Pogba in an advanced role. Ole Gunnar Solskjaer also had his best attacking line of Jesse Lingard, Marcus Rashford, and Anthony Martial.

But, coming into this match, Paul Pogba was suspended after picking up a late second yellow card in the first leg and everyone else aside from Rashford had gone down injured in the weeks since. With so many missing, the Red Devils switched to a 4-4-2.

Ashley Young played as a traditional right midfielder, staying wide and slightly deeper to help Eric Bailly who was filling in at right back. Bailly struggled throughout the match in an unfamiliar position, as much of PSG’s attacks came down that side. Bailly would often stay close to the centre-backs, taking responsibility for marking Angel Di Maria. As Di Maria drifted deeper to assist in the build-up, Bailly would often step out with him and leave gaps. It was left to Young to mark the left wing-back Juan Bernat, but he struggled to cover the space left by Bailly.

After Manchester United scored their first goal, PSG were able to equalise in the 12th minute when Mbappe managed to get into the channel between Lindelof and Shaw. He whipped a ball across the six-yard box to Juan Bernat at the back post. As we can see from the image below, the left wing-back Bernat isn’t tracked by Bailly at the far post and is able to poke in an easy finish.

United’s entire formation started to shift to cover for Bailly’s weakness, as McTominay shifted across to try and cover the half-space on the right side. In the image below, we can see how close Bailly is playing to his centre-backs and how much space is left in the wide areas. You can also see Young berating Bailly, asking him why there is so much space available out wide for PSG.

In the 36th minute, Bailly was substituted. It’s unclear if this was a tactical switch, or if Bailly had picked up a knock, but Diogo Dalot came on for the Ivorian. Ashley Young moved back to right back and Dalot played at right wing, a role he’s been used in for the past two Premier League victories.

With the changes, Manchester United had more defensive solidity. PSG were no longer able to get the success down their left side. With the outlet of Bernat now struggling, Paris Saint-Germain now had issues trying to break down United’s low defensive block. The Parisians controlled possession, but they struggled to create many chances.

The home side played out from the back and had very little problem progressing into the visitor’s half of the pitch. The exception to this came in the second minute when United pressured Kehrer into a sloppy back pass for Lukaku to seize on.

As we can see on the image below, Rashford puts Kehrer under pressure and he makes an unsighted pass back to Thiago Silva. Lukaku is able to get past Silva, getting on the end of Kehrer’s pass to get around Buffon and take an early lead.

With Young now at right-back, Paris Saint-Germain struggled to break down a resolute United defence. They often ended up playing the ball back and forth across the back line, getting no penetration in the middle of the pitch. The attack often ended up taking a U shape, as they had no success moving the ball through the lines.

Di Maria and Draxler should have been key in attempting to break down United’s stubborn defensive block, but neither had much effect on the game. Once Bailly was subbed off, Di Maria had a harder time finding space and was largely kept quiet. The Argentinian is one of the most dangerous players in the world on the counter-attack, but he struggled in a game where PSG had almost 80% possession. On the right side Draxler drifted out wide to receive the ball, but all too often he would play the safe pass backwards.

In the second half, Ole Gunnar Solskjaer changed the shape of his team to a 5-4-1 as they continued to frustrate PSG. Ashley Young played as the right-sided centre-back, alongside Chris Smalling and Victor Lindelof. Luke Shaw and Diogo Dalot played as the left and right wing-backs, respectively. Andreas Pereira switched sides as the right midfielder, and Rashford took position as the left midfielder. This meant that Lukaku was now up front on his own.

This defensive shape made PSG’s possession even more sterile. They were only able to create one chance in the final 30 minutes of the match. However, controlling possession should have been enough for PSG. They had a 3-2 lead on aggregate and were on course to advance to the quarterfinals.

Manchester United were defensively solid, but they were also struggling to create chances. After the second goal in the 30th minute, they hadn’t attempted any shots until the 89th minute. United got the ball back after some sloppy play by PSG, and a lack of concentration by the home side.

The resulting attack allowed Manchester to score the crucial away goal. Manchester United’s penalty came from a hopeful shot from distance by Dalot, and a handball call against Kimpembe.

Winning away to PSG 3-1 would be a great result, but to overturn a 2-0 deficit to advance to the quarterfinals of the UEFA Champions League will go down in Manchester United history. The Red Devils make their first quarter-final appearance since 2013-14 under David Moyes. Paris Saint-Germain will go back to the drawing board, wondering what to do next. PSG will win the Ligue 1 title again, but again the trophy they desire the most has eluded them for another season.