One of the most intriguing ties of the last 16 in this year’s UEFA Europa League was between Eintracht Frankfurt and Internazionale. Frankfurt, who qualified for the competition by winning the DFB-Pokal last season, are having a brilliant season in the Bundesliga and are fifth, just three points behind the Champions League places.

They have been able to do this due to fantastic attacking options in Ante Rebic, Sebastien Haller and the Bundesliga’s top scorer Luka Jovic. On the other hand, Inter narrowly missed out on a last-16 spot in the Champions League, due to a late equaliser from Spurs at the Camp Nou.

Their form in Serie A has been good as well. Signings such as Lautaro Martinez have helped the Italians to just one point behind their local rivals AC Milan in the third European spot in Italy. In this tactical analysis, we will look at how these teams played in the first leg. 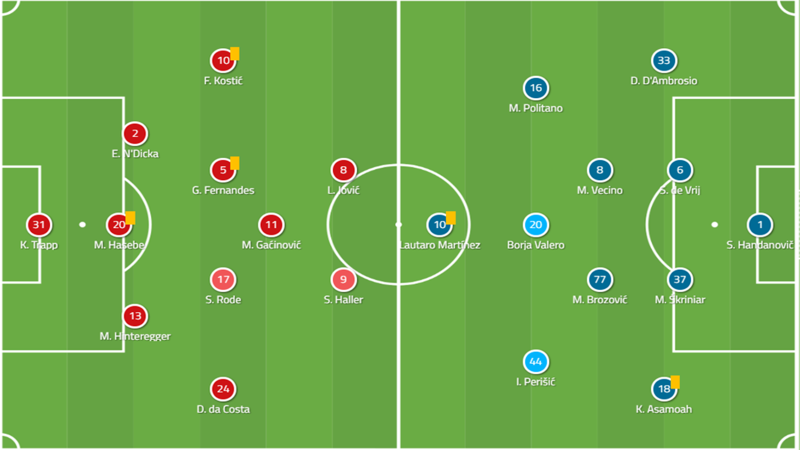 Frankfurt Manager Adi Huttler decided to play with three at the back with two attacking wing-backs in Danny da Costa and Filip Kostic. Other than the two wide players Frankfurt played quite compact with captain Gelson Fernandes in midfield. Croatian striker Rebic missed the fixture due to knee problems so Frankfurt played a front two of Haller and Jovic.

In the other dugout, Luciano Spalletti played a 4-2-3-1 with Ivan Perisic and Matteo Politano on either wing. However there was no Mauro Icardi, who has not played since being stripped of the captaincy, so Martinez led the line.

How did Frankfurt stop Inter from playing?

To start, Frankfurt set up in a compact shape with their two wingers in wide positions as you can see above. This stopped Inter playing through the middle of Frankfurt. The advantage of having the two wide players is that firstly they helped prevent Inter from attacking down the flanks, but also that they helped in trapping Inter in the wide spaces with their press.

In the above image, you can see that the compact unit in the middle of the pitch has shuffled across to support Da Costa to create an overload on the right-hand side of the pitch. The overload prevents Inter Milan from finding a passing lane, so they are unable to play out from the back leading them to clear their lines and Frankfurt regaining possession. This led to Frankfurt having 54% possession in the match.

Also, when Samir Handanovic had the ball in a central area, the Frankfurt pressing unit marked the Inter defence man for man, as you can see above. This also prevents Inter from playing out from the back. But the problem with this is the gap between Frankfurt’s pressing and defensive unit.

If Handanovic had been able to find a good ball into the empty spaces shown above, Inter could have created an overload in an attacking situation. Therefore, the Frankfurt back three could have benefited from using a higher defensive line near to the halfway line and then dropping back once Handanovic has hit the ball. The only concern with this would have been if the keeper had cleared the ball past the back three and into the feet of either Politano or Perisic who could have been clear on goal.

At half time Frankfurt’s possession was only 46%. This was down to them not being very good at playing the ball out from the back themselves. If you look at the below pass network, you can see the width of both Kostic (#10) and Da Costa (#24). Despite being so high up the pitch helping Frankfurt with the press, is also led for them not being in positions to receive the ball when Kevin Trapp had the ball. This just left the Frankfurt back three, who were very compact and couldn’t make a good option to receive the ball.

To put this into a scenario from the game, we can see below that Kevin Trapp has the ball, but he has no options to pass to, so he must hit the ball long. You can see that there are no options available for Trapp to play to on his right-hand side as Da Costa is too far up the pitch and this gives Inter a better chance of winning the ball back from Frankfurt.

How did Frankfurt change in the second half to regain possession?

Below Hasebe has possession of the ball with space and options to play to. Due to this Inter could not press him otherwise there would be a gap for Frankfurt to exploit. As a result this gave Hasebe the opportunity to drive forwards with the ball and create an option to play to.

In addition, Da Costa was very good at making runs. Due to the game being compact in central areas it was hard to create combinations in these areas. Da Costa made runs both out wide to create space in the central areas or in it to create an overload. In the below example, he plays the ball to Haller and makes a run into the central area to complete a one-two. Movements like this would help create better chances in the final third.

However, it was tough to make these chances due to the compact nature of both sides. If you look below you can see how compact Inter Milan where which made it very hard for Frankfurt to make combinations in the penalty area.

So where did the chances come from?

If you look at the expected goals for each side, Frankfurt had 1.58 and Inter had 1.7. So, it is odd that the actual score was 0-0. And the reason for this was most of the chances were from headers, or efforts from outside the box.

If you look at Inter’s expected goals map they had 10 efforts with nine of those coming from inside the penalty area, but only Marcelo Brozovic’s penalty miss had an xG of over 0.25. This was because Frankfurt’s compact shape stopped Inter Milan from having a decent shooting chance inside the box.

Even if you look at the penalty incident itself, which was highly debatable as Martinez went down very easily, you can see that Martinez has his back to goal and the Frankfurt defence is very compact. If the penalty had not been awarded it would have been very hard to see Inter scoring. However, it was from aerial positions where both defences looked shaky.

In the above example, we can see Hintergerrer make a run in front of Martinez, who had a chance with a diving header. Below you can see De Vrij winning a free header from a cross. Both cases show that neither side were good enough at defending set pieces as they were not aggressive enough in these situations.

This allowed the attackers to have decent efforts from crosses. However the quality of headers from both sides was not up to the standard to beat Trapp or Handanovic.

Inter picked up on this so when the ball was received out wide, in this case with Politano, the Inter attackers would flood the box to increase the chances of winning a free header. In the below example four Inter players positioned themselves towards the far post in the hope that they might receive a cross for a header.

Everything is still left to play for at the San Siro in this last-16 Europa League tie. Inter will be happy that they will not be at a disadvantage going into the second leg, but Frankfurt will also be happy not to concede an away goal. Going into the second leg it will be interesting to see how much Inter will commit just three days before a massive Milan Derby, which could determine who takes the third Champions League spot in Serie A.