It is no secret that Ajax have plucked and developed young talent from around Europe and their native Netherlands. This season, the likes of Frankie de Jong and Matthijs de Ligt have excited fans of continental football and the former has even earned a big-money move to Barcelona in the summer. With the noise around these Dutch talents so loud it would be unsurprising for Maximilian Wöber’s move from Ajax to Sevilla to have slipped under the radar.

A left-footed centre-half by trade, Austrian-born Wöber began his career in his homeland. His youth exploits saw him move from the breeding grounds of SZ Marsweise to Wiener Sportklub before settling in one of Austria’s powerhouses, Rapid Vienna.

Rapid have been a club in the shadow of Red Bull Salzburg and in competition with city rivals Austria Vienna. With a limited budget, producing young talented footballers is key to the team’s success. Spending two years at Rapid playing in both the first and second-string sides, Wöber caught the attention of a European giant.

Ajax purchased Wöber for just over €8 million. Drafted straight into the first team, Wöber, being left-footed, could deputise at left-back and gained notoriety as a versatile defender. Wöber played 22 times in the Eredivisie in his first season building up a strong partnership with the aforementioned De Ligt.

However, with the signing of Daley Blind from Manchester United, Wöber’s minutes in the Ajax first team diminished and upon reaching January, La Liga side Sevilla identified Wöber as a potential player to improve their defensive options. Signing initially on loan with an obligation to buy the Austrian in the summer, Wöber has already made five La Liga appearances including a clean sheet in the 5-0 demolition of Levante.

Wöber’s versatility has also been utilised in Andalusia with the Austrian being deployed in a left-sided wing-back role for Sevilla. When playing against Barcelona in a recent fixture, Pablo Machin’s tactic to play with a defensive row of three with wing-backs dropping in to make a back five would typically be a stubborn blockade. When Messi turns on the style to score his 50th hattrick however, there are very few teams who can cope and it was no different in the Ramon Sanchez-Pizjuan.

It is becoming more and more apparent that the modern age centre-half no longer needs to solely possess the ability to time a tackle and win a header but to add additional elements to their game. The Spanish Primera Division has begun to reveal the trade of passing in its young defenders. Former looks at Espanyol’s Mario Hermoso and Athletic’s Unai Nunez showed clearly the coaching going into training these talents to spray passes to either flank with pinpoint accuracy.

This passing has become more evident in Wöber’s game since moving to La Liga. Being left-footed and deployed on his more comfortable side, he can spray a pass out to the right flank, occupied by the talismanic Jesus Navas. This ability was clearly identified from his time in the Eredivisie. Wöber’s long passing traits have slotted in perfectly in the Andalusian capital side.

As shown in the 2017/18 season at Ajax, Wöber completed his long passes with a 52.1% success rate. For a player of Wöber’s age to be doing so at this efficient rate was bound to attract the attention of a club from Europe’s elite.

As you can see from the graphic above, not only is Wöber attempting more long passes in his matches but with a higher success rate of 73.2%. Granted this is just in the first four fixtures he has featured in the Primera Division so far. However, the signs for future efficiency in his passing game look fruitful. 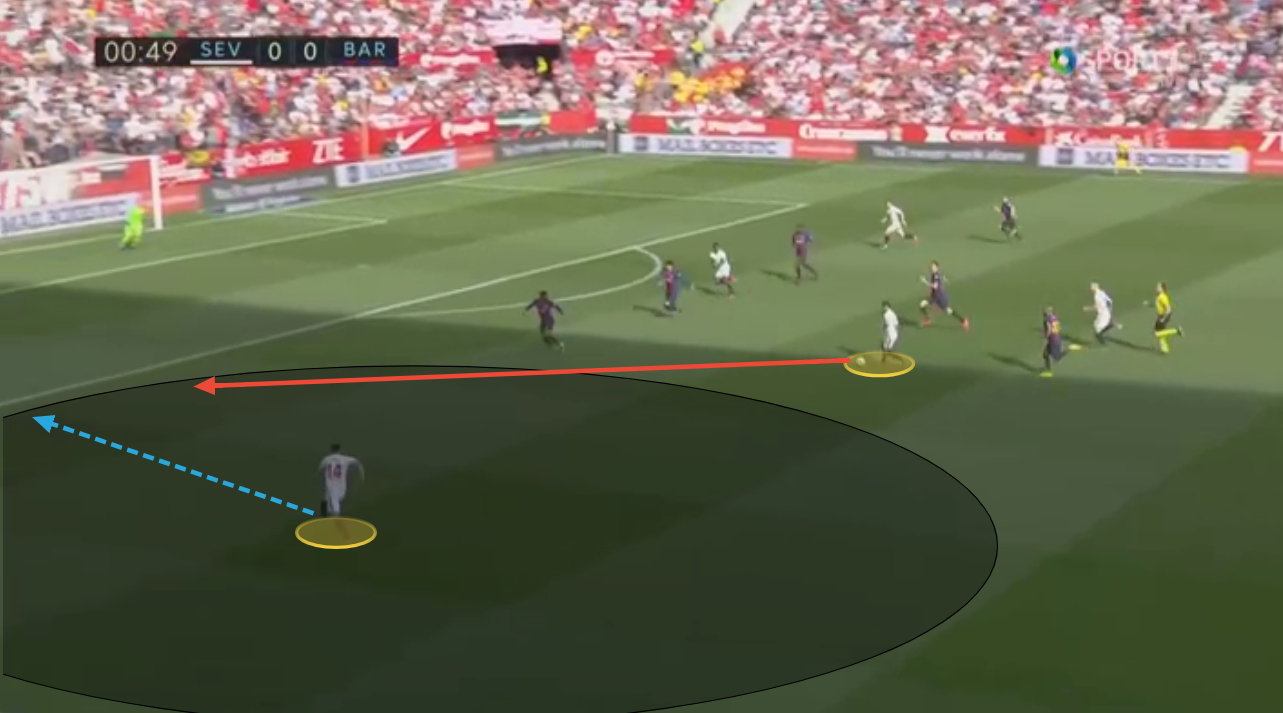 You can see from the image (above) that in his less natural position as a left-sided wing-back, Wöber makes space for himself to receive the passes an experienced attacking full-back would like. Sevilla have lacked this quality in the final third from their defensive players. Regular left-back Sergio Escudero has only one assist so far this season, and so the faith in Wöber from Machin to play as an alternative option is unsurprising. 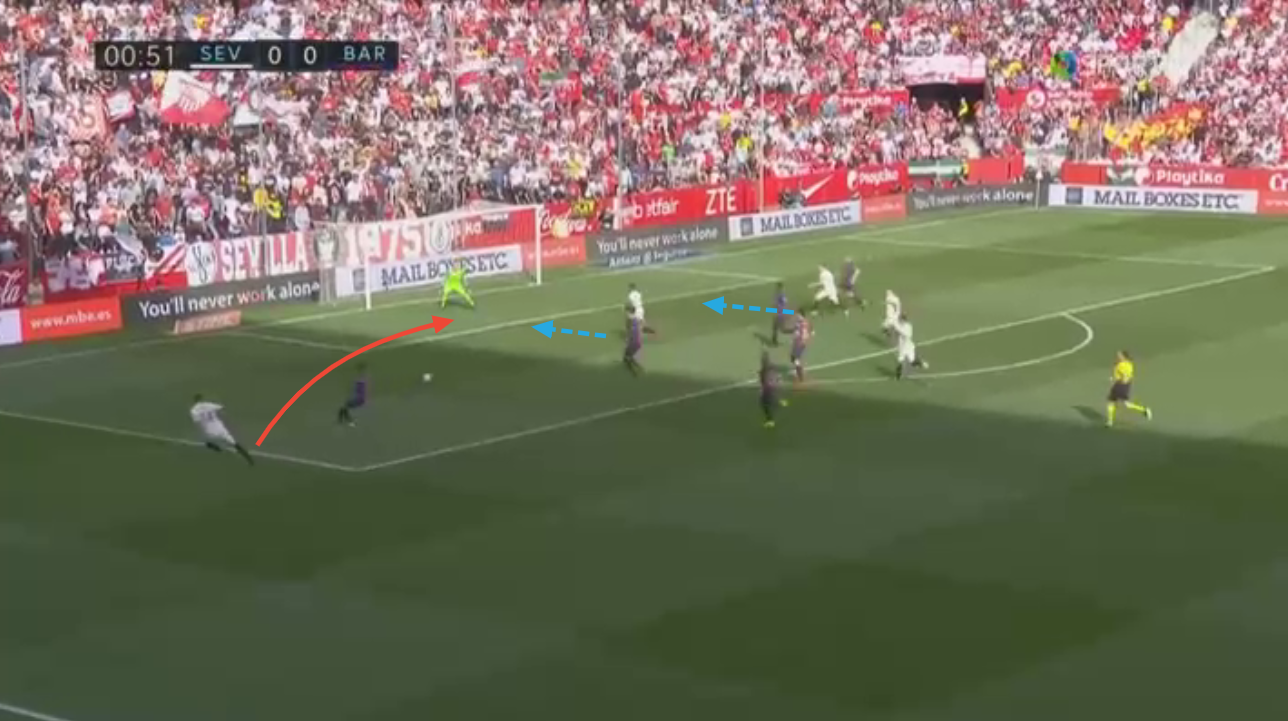 The quickness of thought to play the cross with a first time pass in the middle is also evidence of an instinctive player with mature decision-making qualities. Whilst the instance displayed above was not one which could be converted, it certainly alerted Machin to his attacking qualities.

Even in his more familiar centre-back role, Wöber is always looking to be the ignition for a Sevilla attack. Below, the Austrian receives the ball and sees the open space ahead of him. Driving at the Villarreal defence allows the Andalusian attackers to see their opportunity to dart in between the Yellow Submarine’s back-line. 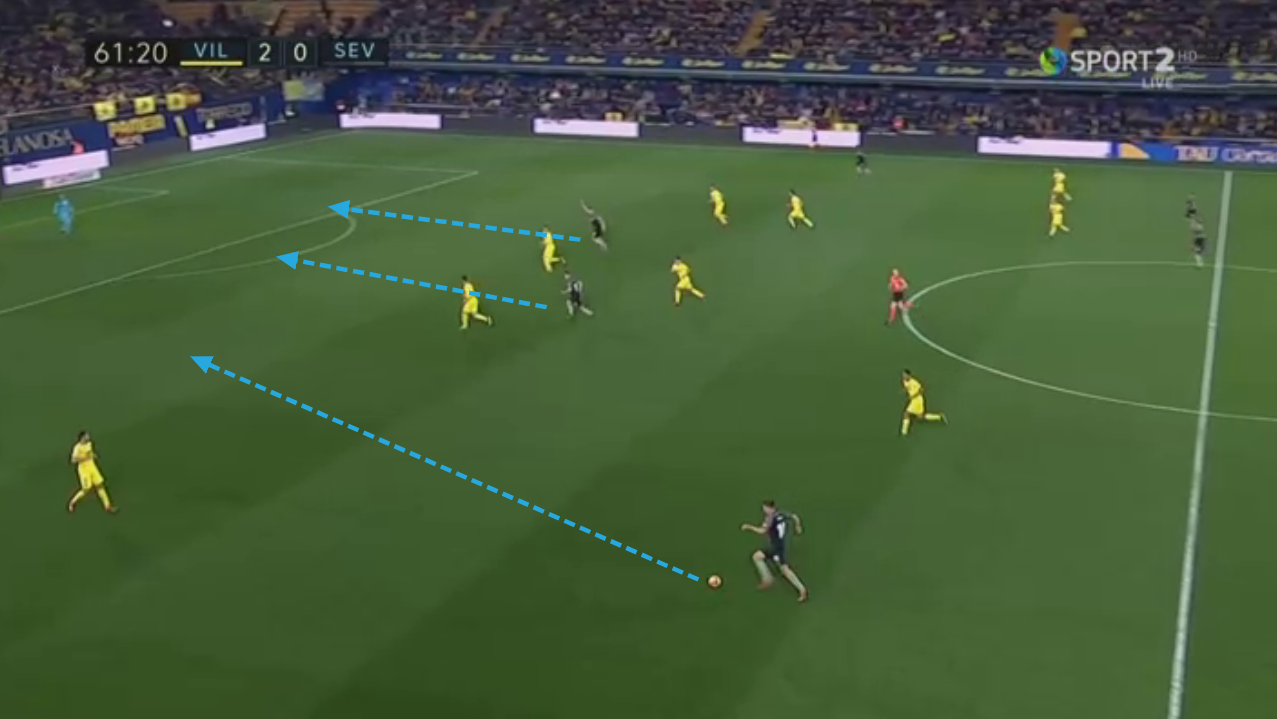 Not only is it in his nature to drive at the defence looking to open up channels, but it is the accuracy and confidence in his decision making again which shines through with his final ball.

For a centre-back you would expect to have around 90% pass completion. However a young attack-minded defender often sees that statistic dramatically fall.While the Austrian has dropped below that 90% benchmark, to be completing passes with an 83.4% accuracy rate is impressive for a player of his ilk. 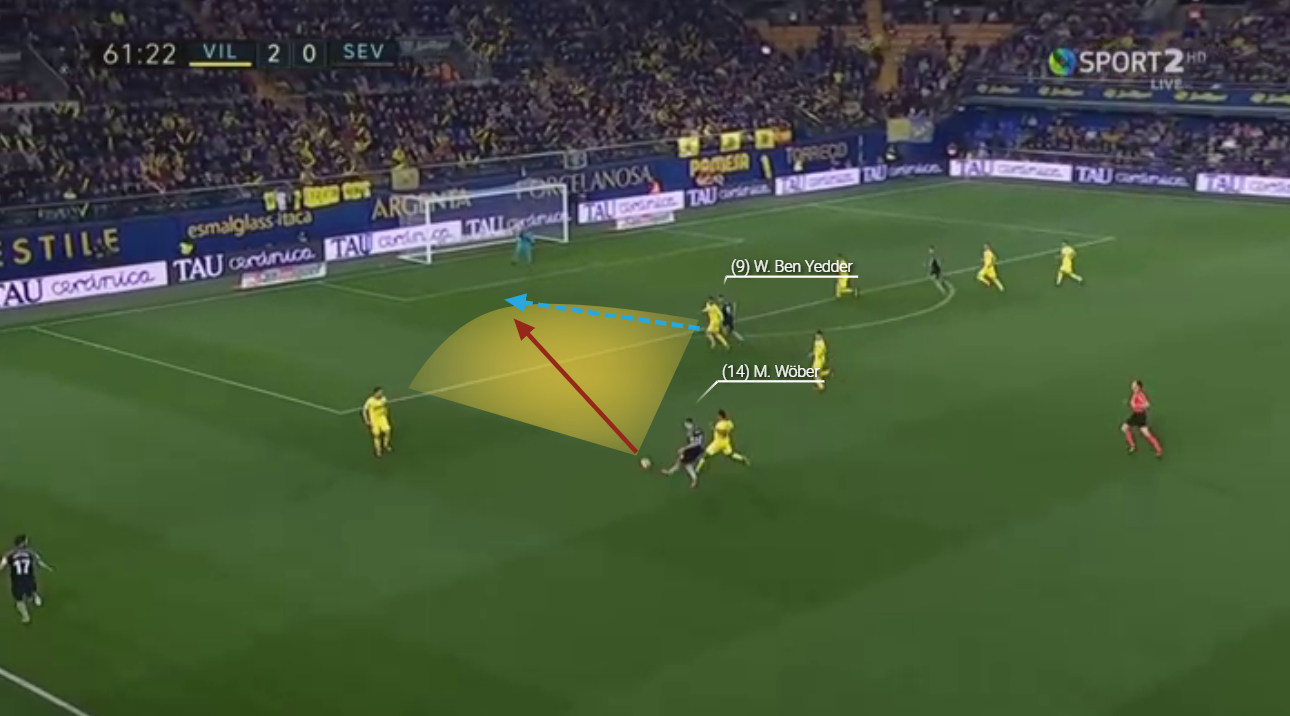 But a defender still needs to be consistent at the job his position dictates. It may seem an obvious statement but so many players at a young age, especially defenders, lose sight of their primary role in the team looking to stand out from the crowd. No better example can be found across Europe than arguably the best defender in it right now, Virgil van Dijk.

The Dutch commander has been heralded not for his alternative actions but for the very standard but extremely effective trait of being a metronome of high quality defending. With the standard set, to see how the young Austrian is developing his own defensive game will reveal much about a possible bright future.

Ajax themselves were a very attack minded team when the Austrian was a stalwart of their defence. When caught on the counter after committing men forward, the likes of Wöber needed to be positionally sound to nullify any potential threats. 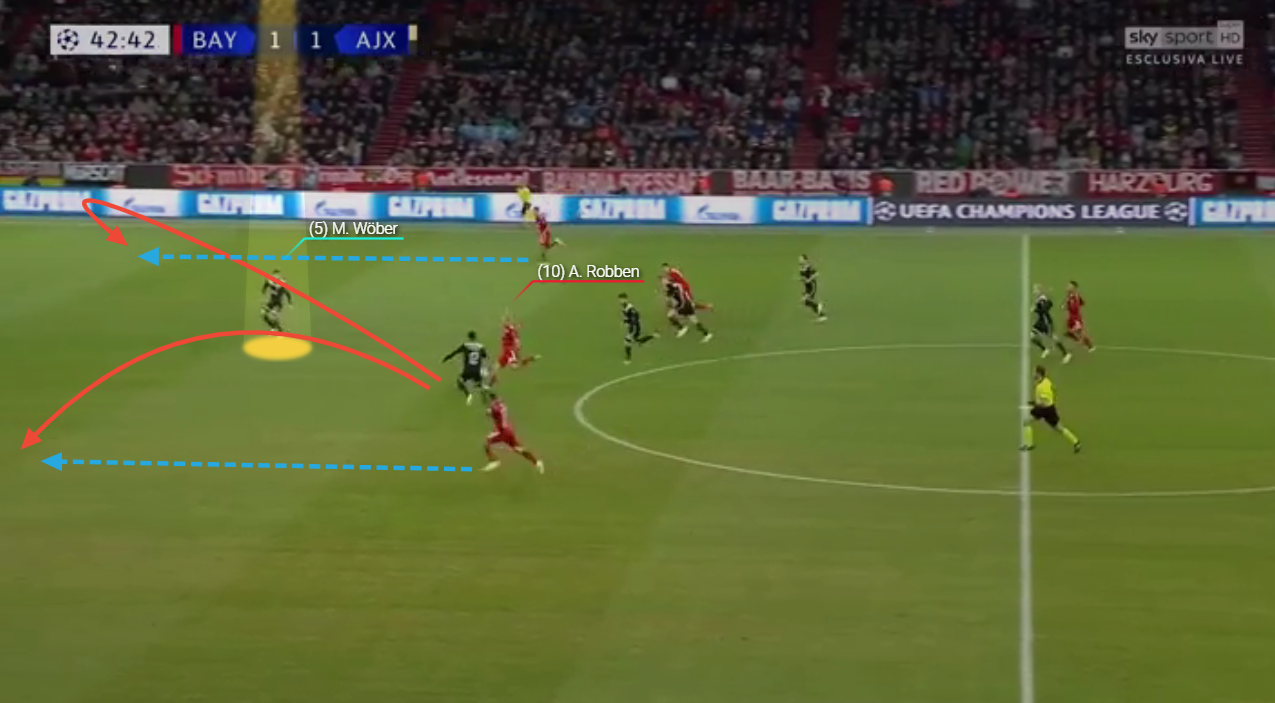 The example here shows Ajax needing to be on top of their defensive game to mitigate the onslaught from one of Europe’s finest in Bayern Munich. Getting caught on the counter against the German giants is a completely different experience to opponnents in the Eredivisie.

In this instance Robben has the option to send a wide pass to either flank. Wöber anticipates the fact the right-sided option is the most likely with his colleague blocking the Dutchman’s left-side. 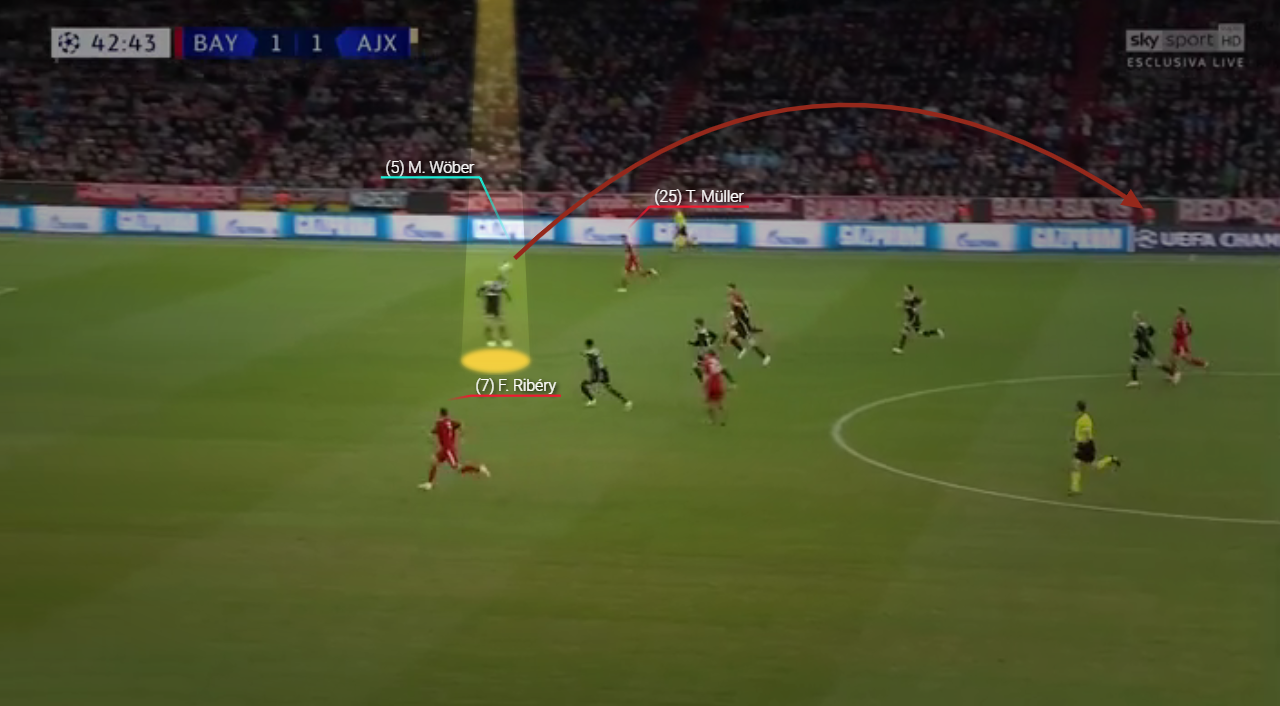 Wöber can intercept and clear the attempted lofted pass and relieve pressure on the Ajax back line. Interceptions have been a key part of the youngster’s game, completing an average of 5.7 per match since his move to Spain.

His positioning can be lax in some instances. For a defender playing centrally his pace allows the Austrian to often drift wide and cover his defensive colleague at full-back. 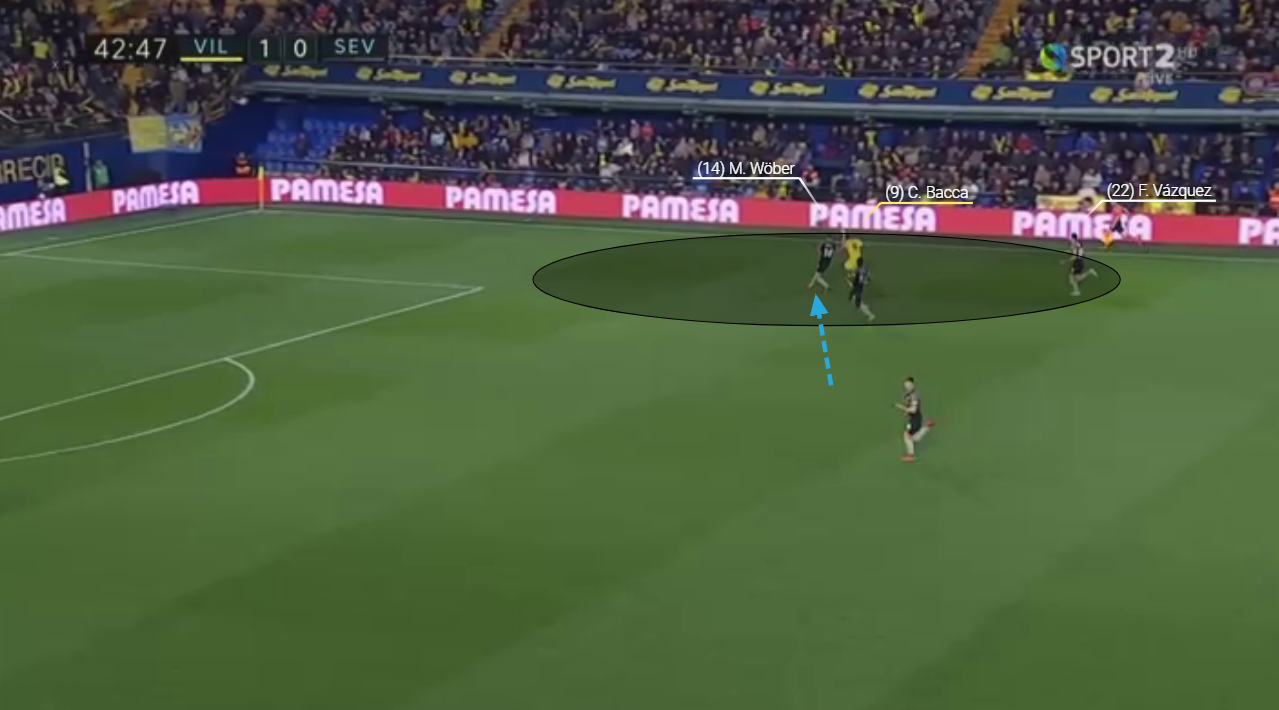 In this instance, Wöber is very aware of the danger of the space being exploited in behind Franco Vazquez. His reading of the game is such that he moves to cover the wing-back position and close Carlos Bacca down to mitigate the opportunity creation of the Colombian.

Although Wöber has just begun his journey in one of Europe’s elite leagues, stepping out of the high-profile shadow of Matthijs de Ligt and into the fire of the Primera Division could have been a real culture shock for the Austrian. The young defender has taken it in his stride however with confidence and maturity.

Sevilla have an important season to secure Champions League qualification with the likes of Getafe and Deportivo Alaves surprising but deserving competitors in the race for that fabled spot. Quite like Tottenham Hotspur’s constant pressure from neutral fans to falter in their battle with Leicester City for the Premier League title, Sevilla are certainly not the neutral’s choice in the race for 4th place and will have to deal with being the pantomime villains in the weeks ahead.

With defeats to Villarreal and Huesca fresh in the memory, Wöber will need to put aside any transition errors and deliver performances of real quality – performances which earned him the move he certainly deserved.