Matthijs de Ligt: How good is the Ajax captain?

Over the past few years, we’ve witnessed a huge amount of young talents getting all the attention from the biggest European clubs. Scouts are going crazy and teams are paying enormous figures just to make sure these young talents are going to develop their skills in their club.

One of these players is Matthijs de Ligt. The Ajax defender was placed under the spotlight after his great performances for the Dutch team last season. Along with his teammate Frenkie de Jong (21) and despite his young age of 19 he is targeted with various big clubs like Barcelona, Real Madrid, Manchester City and Arsenal.

He’s already captained Ajax during the new season and his performance was quite promising. But what are the qualities that made him stand out from the others?

The 19-year-old centre-back has already showed that he is good enough physically and technically. He likes to keep things simple, although he is one of the best passers among the Eredivisie’s defenders. His height, strength and speed were the reason for him getting so much attention. He already has the tactical knowledge and always finds the best positioning, so he can contribute to the team’s performance in the best possible way. His height of 188 cm is very useful from set-pieces as he could win any aerial duel after a corner kick or so.

He has captained Ajax in 5 games in the league so far this season and the team’s amazing record with him defending is only 1 goal conceded vs 14 scored. The team played PSV Eindhoven last weekend and registered its first defeat of the season going 0-3 down. But De Ligt was absent due to a knee injury he picked up during the first round Cup win against Te Werve. He was captain in the Champions league too and took part in both legs against Dynamo Kyiv in the qualifying round.

He averaged a pass completion rate of more than 90% last season – more than any other defender in Eredivisie. This passing ability makes De Ligt a perfect fit for many of Europe’s top sides. Matthijs is used to help to the midfield too where he contributes with some long balls and great passing skills.

The youngster represented his country Netherlands against the world champion France during the international break, but the team went 1-2 down. 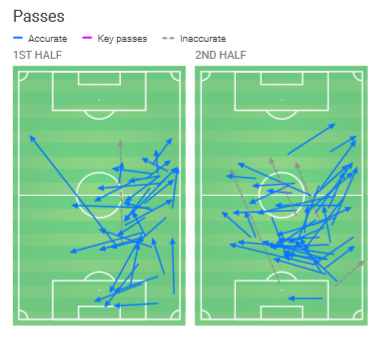 This is a map of his passing activity during the game. As you could see only 5 of his passes were inaccurate. That makes him a great option for teams like Barcelona, as the Spanish team will be looking for a long-term replacement of Gerard Pique. 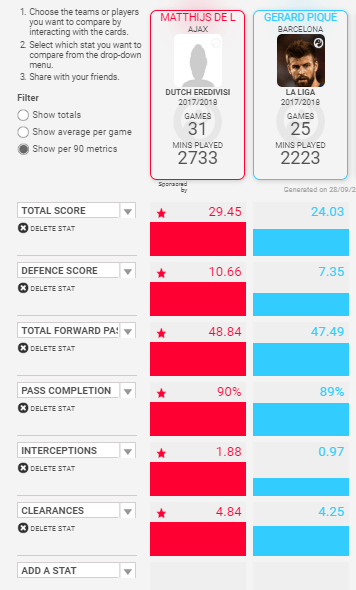 As we could see in the stats comparison De Ligt has better indicators per 90 minutes than Pique for season 2017/2018. He makes more forward passes, has higher pass completion percentage, and makes more interceptions and clearances. But he has played in 6 more games. This looks like it’s enough for the Dutchman to replace Gerard but we should bear in mind the pressure put on the Spaniard. As he is playing for one of the biggest clubs in the World, the expectations are higher and the opponents stronger. However, no matter how good is Matthijs now, he surely needs some more time and experience so he can get there.

His performance against Groningen (3-0) was too impressive as he managed to make 5 clearances, won 2/2 tackles, won 5/9 duels, sent 6/6 accurate long balls and had a pass accuracy of 96%. And that is his permanent form so far off the season. There is no doubt why Ajax managed to keep a clean sheet in four out of their 5 games when he was playing.

His ability to win the ball back inside the box, while making minimal contact showcases Matthijs’ tackling ability and is a great example of how to get the possession back without risking giving away a penalty kick. 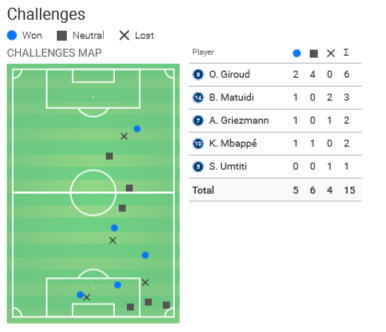 He managed to win 5 challenges against the World Champions. He won his duels against Olivier Giroud and Antoine Griezmann that are a lot more experienced than him. And managed to do it against one of the best young players in the World – Kylian Mbappe. 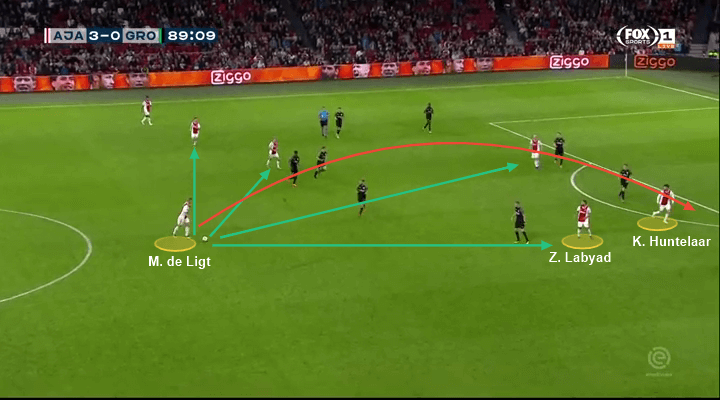 He averages 4 long balls per 90 minutes. In here Matthijs had few options for a pass but noticed that most of his teammates are man-marked and it would be difficult for them to proceed with the attack. The only one that wasn’t fully covered was Klaas-Jan Huntelaar who was able to receive the ball and eventually go into the box.

As I mentioned he is positioning well, and he helps a lot with covering his teammates’ backs. Although the youngster tries to go up the pitch he always keeps an eye of his position and goes back there precisely. 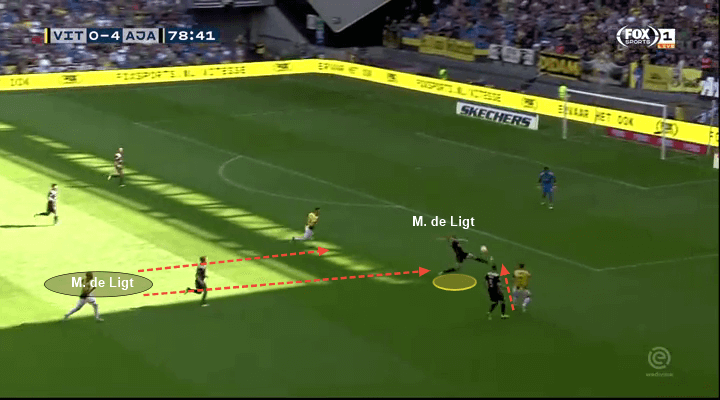 His teammate couldn’t manage to outrun his opponent so De Ligt had to use his speed to cover him. He reached the loose ball and managed to make a clearance. 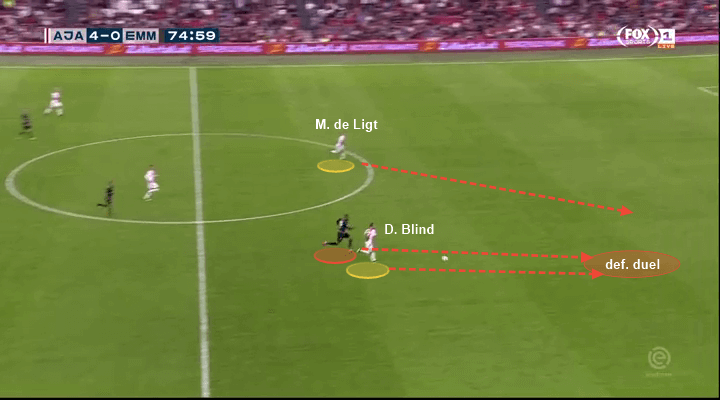 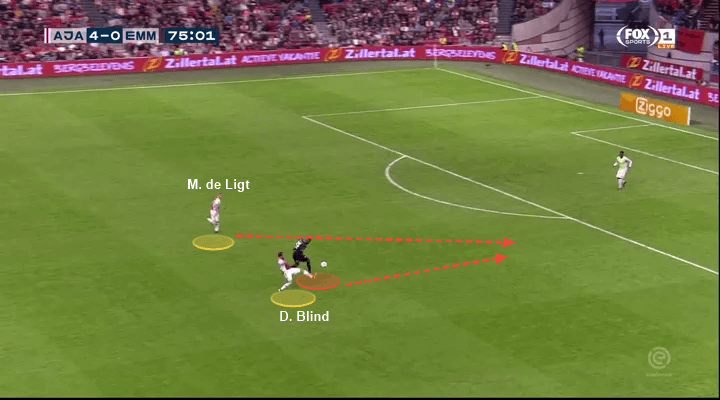 The highly positioned defensive line was the reason for Emmen to be able to counter-attack. While running towards the box Daley Blind lost his defensive duel and gave up the possession of the ball. 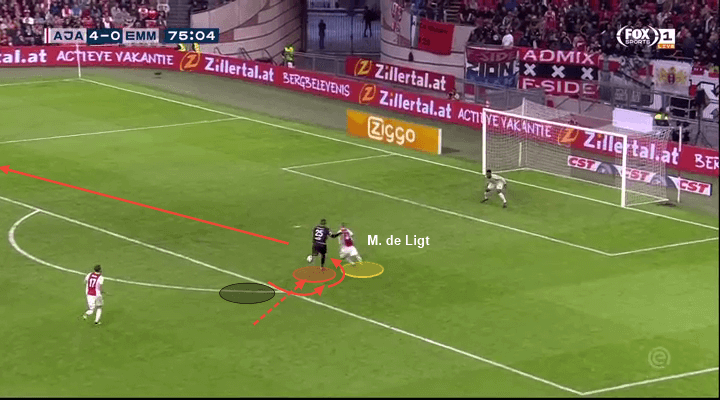 With another speed run and a great pressing duel, De Ligt then won his defensive duel and prevented the danger as he was the only present defender out there. 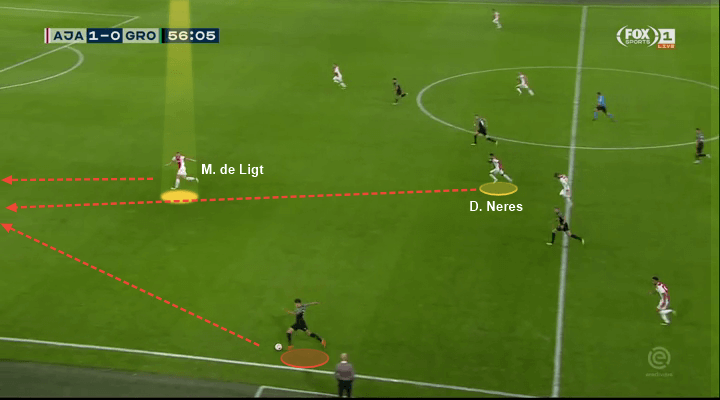 After not-so-good positioning, Matthijs had to cover both the right-back and his position as his opponent was making a run on the flank. The right-back was absent so the captain instructed the forward David Neres to fill the gap on the right so he can get back in position. 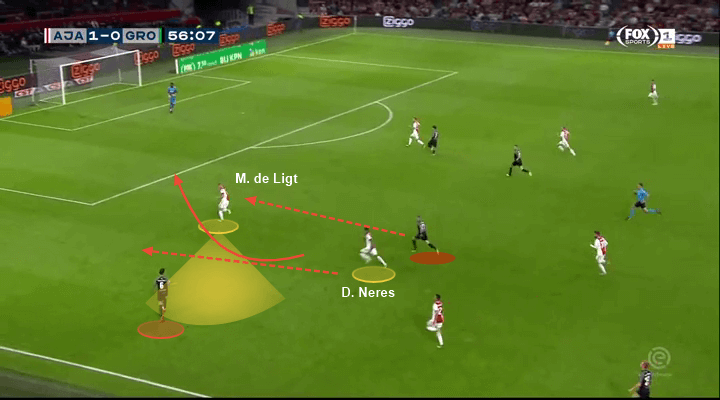 He was taking care of both areas whilst waiting for Neres to reach their opponent and running towards the edge of the box where his position is. And he actually won a defensive duel afterwards and helped his team get back the possession.

As such a young player, who was given the opportunity to captain his team, it is impressive that he hasn’t got weaknesses that could not be worked on. He still needs some time and experience to improve his decision-making. His timing while tackling needs some work too, but his overall appearance offsets his weaknesses. Maybe working with some new players and new tactics are going to improve his performance even more.

His agent Barry Hulshoff once said: “His mind is constantly occupied with what he needs in favour of being a good defender. He always gives 100% and he sets targets for himself, which he will accomplish if there are no injury problems”.

And somehow believe so. His physical strength and confidence could make an impact on any team’s performance. Let’s take Barca this season – no matter of the high possession percentage, the team allows some counter-attacks and is sometimes exposed at the back. He could be very useful as he can react quickly and use his speed to get back on position.

No matter which one is going to be his next team he is going to need more experience to be able to take in by storm and Ajax is the right place to gain it.