Last weekend saw perhaps the biggest game on the planet take place as Boca Juniors and River Plate clashed in the legendary La Bombonera stadium in Buenos Aires. The game ended in an impressive 2-0 win for River which lifted them above their arch-rivals in the table. This tactical analysis looks at the trends of the game and how both teams approached the derby.

Both teams set up in similar defensive formations. Boca Juniors played 4-4-1-1 in defence and had Rossi in goal with Jara, Izquierdoz, Magallan and Mas in defence. The midfield had Nahitan Nandez on the right, Cristian Pavon on the left with Barrios and Almendra in central midfield. Former Manchester City captain Carlos Tevez played as a number 10 behind Dario Benedetto.

River defended in a 4-4-2 and had Armani in goal, Montiel, Maidana, Pinola and Casco in defence while the midfield quartet was Enzo Perez, Ponzio, Palacios and Gonzalo Martinez. The front two was Lucas Pratto and Rafael Santos Borre.

Now let’s get into the tactics behind River Plate’s win. Let’s start with a look at Boca Juniors attack.

Boca set up in a 4-2-3-1 in possession with the two wingers giving full width in their starting positions. Tevez would then look to find space behind River’s midfield. The back-four was spread out with the full-backs quite high and wide and the two central midfielders looked to help the centre-backs to progress the ball into the front four. It often looked like below. 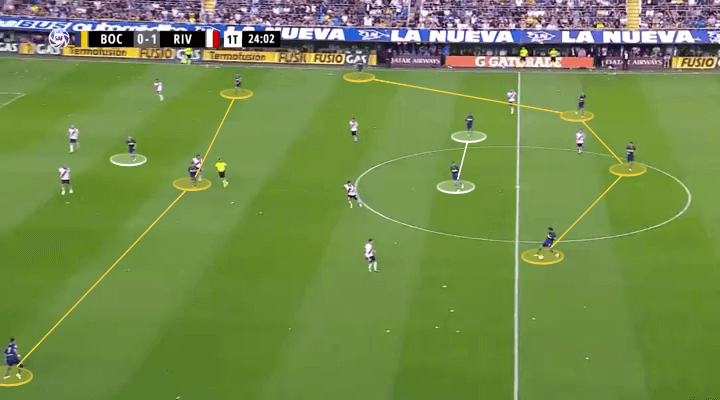 They did use some interesting rotations in their attacking play though. Mostly this came through the movement of Cristian Pavon. He started on the left wing but would often make movements towards the left-sided half-space. This often meant Tevez would drop into the right-sided half-space. With Nandez wide on the right and the right-back overlapping, while the left-back Mas would push into the space vacated by Pavon, this gave Boca Juniors a 2-2-5-1 shape in attack. The five would be both full-backs down the wings with Pavon, Tevez and Nandez in the positions behind Benedetto. You can see Pavon’s movement below. Tevez is the yellow circle just out of shot. 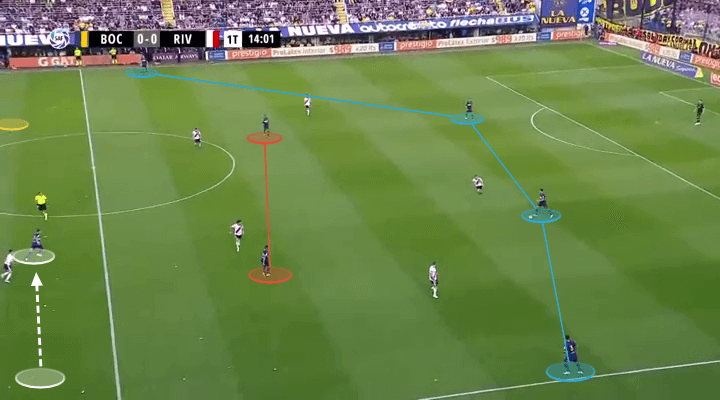 Boca Juniors had some promising attacks and did create some good chances, but they didn’t manage to break through River’s excellent defensive structure well enough to score.

River Plate also had some interesting rotations in their attacking setup. As stated they defended in a very narrow 4-4-2. Incredibly, their attacking shape was perhaps even more narrow. Both wingers would move into the center and position themselves just in front of the two central midfielders. This created a midfield box of four players. The two “wingers” would look to find space behind Boca Juniors’ midfield and this setup gave them a numerical advantage centrally. The positioning was clever too as it constantly created positional superiority for River in the centre of the pitch. An example of the setup can be seen below. 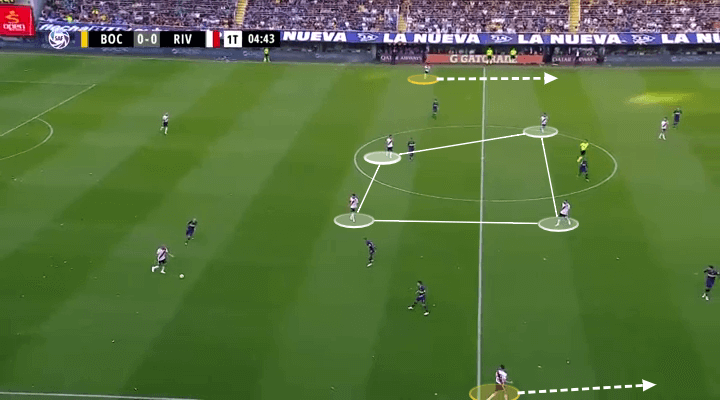 As you can see, the wings were left open to the full-backs. This positioning created issues for Boca’s defense as they’re man-orientated pressing towards the two deeper midfielders left at least one of the two attacking midfielders free at any given time.

One area where River excelled at times was when looking to break Boca’s press. One such example can be seen below. Boca’s man-orientated press on River’s left wing has seen the left-back become the free man. Martinez makes a run towards the ball and the pass is played. He can then simply lay it off to the left-back and Boca’s press has been broken. A great example of how to beat a man-orientated press. 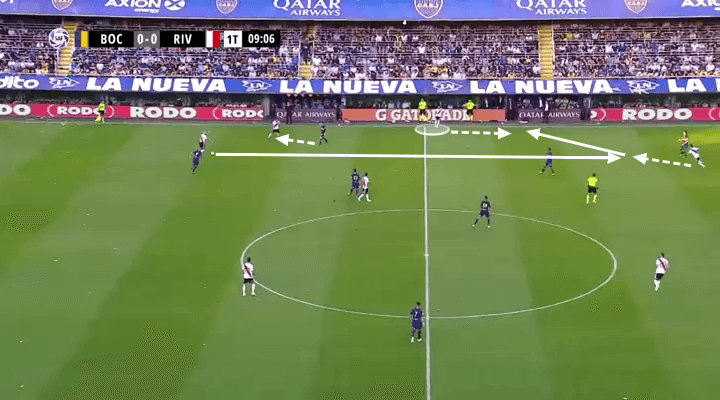 River’s narrowness in attack was demonstrated in both goals. The first goal came after winning the ball in midfield and countering. The ball bounced up in the air and Martinez would then hit a splendid volley. The possibility to do this came from him starting in such a narrow defensive position which we’ll look at below. The second goal (highlighted below) came from a through-ball from the substitute Juan Fernando Quintero towards the striker Pratto. Pratto’s first touch let him down but another substitute, Ignacio Scocco (yellow), hit a wonderful half-volley into the back of the net to make it 2-0. The initial through-ball came thanks to Quintero’s centred position in attack. 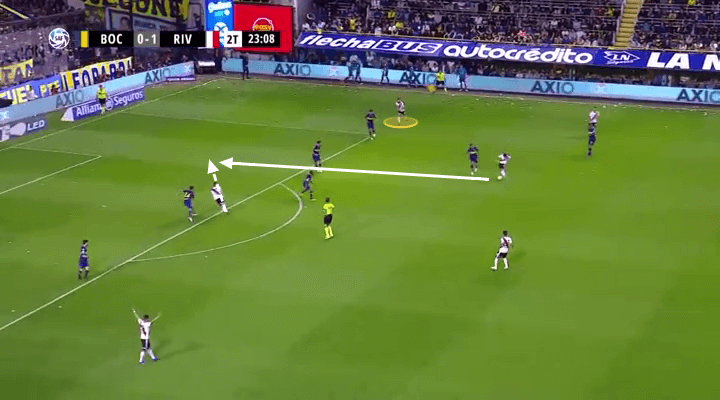 What won the game for River, apart from the two fantastic goals, was their immaculate defensive structure. The coach Marcelo Gallardo has been compared to Diego Simeone in the past and going by this game the comparison is a fair one. River defended in a very narrow 4-4-2 which can be seen below. The midfield was extremely compact horizontally and the defensive and midfield lines were almost as compact vertically. Just look at the image below. As you can see, the midfield is extremely narrow and it is the full-back (white) who goes to press in the wide area. 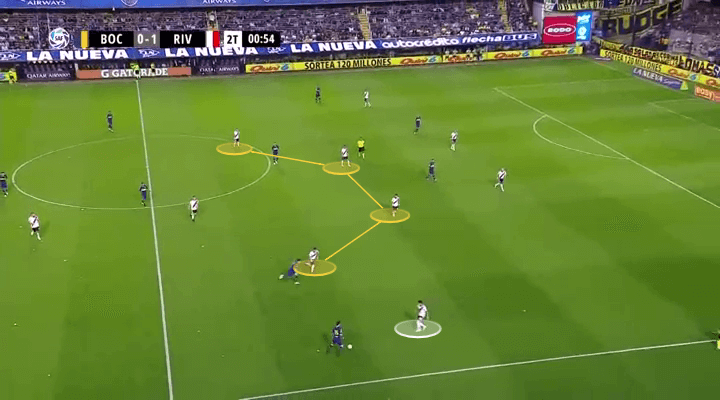 River really looked to close off the centre of the pitch for Boca and often left the wings free. The below example of their man-orientated pressing also highlights how dearly they wanted to cut off Boca’s access to central areas. The ball has been played back to Boca’s left-sided centre-back. River’s players go to press. Each looks to pick up a direct opponent. Note the position of Martinez, the left-sided midfielder, in the top left corner. 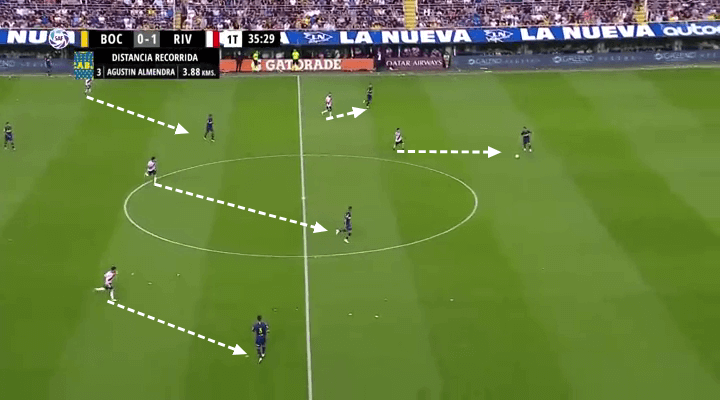 The ball is played back towards River’s left as Boca’s centre-backs exchanged possession. Look at Martinez now. He’s almost in the centre circle marking Barrios. The central areas are closed off by River’s man-marking but the wide space is left free. Boca’s right-back (yellow) is an easy option, but River won’t care. Their aim was to cut off the centre and they did it successfully throughout. 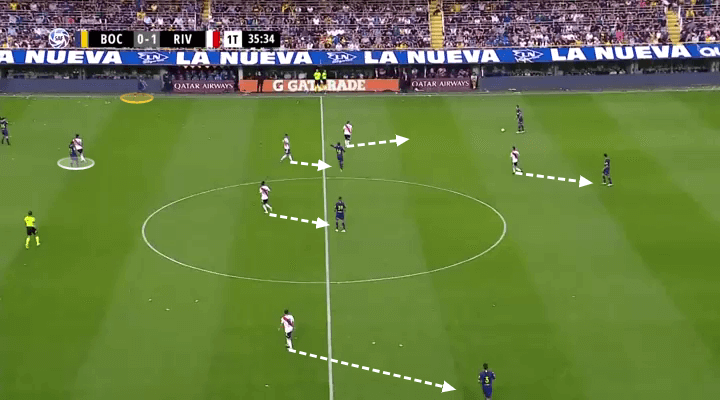 The derby between Boca Juniors and River Plate is possibly the biggest game on the planet and goes by the name of El Superclasico. The game last weekend featured unbelievable atmosphere in the Bombonera and saw a restless high-intensity game. It was a really good and quite even game but River Plate and Marcelo Gallardo earned a huge win largely thanks to their superb defensive setup.

Want to read more about South American football? Check out this on Lucas Paqueta.