The battle of the Champions League returned from the winter break on Tuesday night as AS Roma encountered FC Porto in the round of 16. As last year’s semi-finalists Roma came to this clash as favourites to advance to the next stage. However, there was not really big gap between the two sides in the first half, at least on paper.

Although Roma were in control from the beginning, they couldn’t turn their dominance into a tangible advantage until late in the second half when Zaniolo scored twice in quick succession with only one goal in response. There are still many talking points but this tactical analysis will focus on some important aspects of the game.

The hosts deployed a 4-3-3 formation which easily transformed into a 4-5-1 in defence. In midfield, Lorenzo Pellegrini and Bryan Cristante had room to operate while Daniele De Rossi took the more defensive role. At the middle of the front trio, Edin Dzeko played as a target man while Eusebio di Francesco chose El Shaarawy on the left instead of Justin Kluivert. In the absence of Cengiz Under and Patrick Schick, Nicolo Zaniolo hugged the right side. 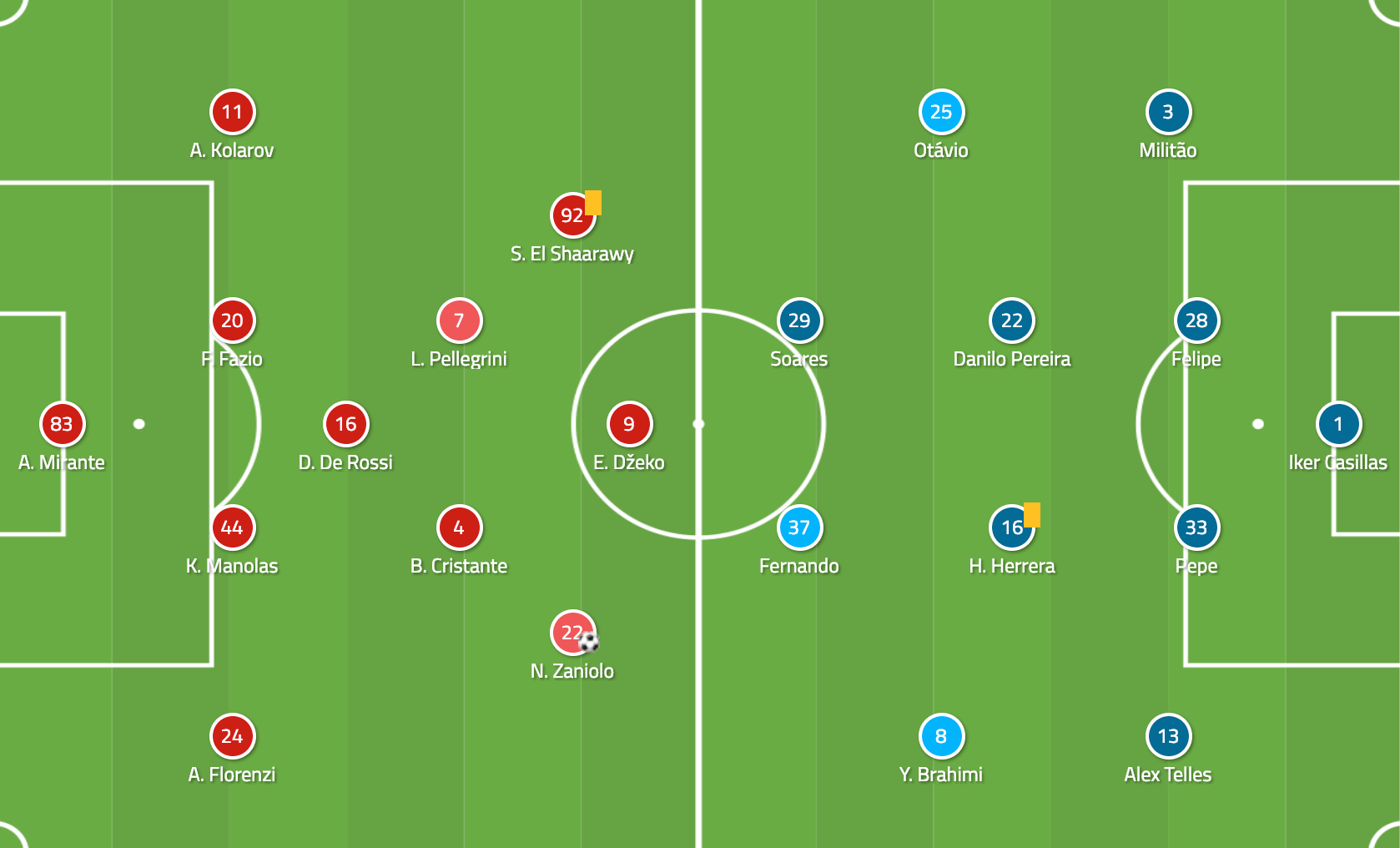 On the other side, Porto formed their usual 4-4-2 but in the absence of Moussa Corona, Otavio was responsible for the right wing. In the middle, Sergio Conceicao chose a cautious midfield pair with Hector Herrera and the defensive-minded Danilo Pereira.

It turned out that early in the game the guests had difficulties when building from the back. This was one of the major issues for Porto since they could not create a stable build-up against Roma’s press. Let’s see why.

Firstly, Di Francesco’s man morphed into a 4-1-4-1 shape against the ball which aimed at denying the opponent’s progression in central areas. Dzeko targeted one of the centre-backs while the other was pressed by Pellegrini or Cristante, depending on the situation. Meanwhile the wingers, El Shaarawy and Zaniolo, were tasked with closing down the opposition full-backs.

With this setup Roma were able to create a numerical superiority in the middle and prevent progression even if Pereira dropped in between Felipe and Pepe.

Often when the centre-backs attempted to progress the ball or a pass between themselves performed, it triggered Pellegrini or Cristante’s press. With this diagonal pressing run Cristante was able to prevent passes, therefore Porto could not utilise Otavio or Brahimi’s dropping movements in the half-space, in behind Roma’s pressing lines.

One tool that Porto tried to utilise was to volley the ball in behind their opponent’s last line targeting the forwards. These long balls often came from the right wing: the target was Soares, who ran diagonally behind Kolarov. Unfortunately, these passes were not as effective.

In contrary, Roma’s regular 4-3-3 did not produce a possession-based style, but rather focused on counter-attacks in a highly vertical and direct manner.

This even worked against Porto’s press which was less effective than Roma’s. The guests formed a 4-4-2 shape that became more like a 4-3-3 due to Brahimi often pushing forward, but rarely putting pressure on Roma’s centre-backs. When the home side attempted to build from deep they took a 2-4-1-3 shape as the full-backs pushed forward.

Besides, Rossi and Cristante also stayed deep to help the build-up. This forced Porto to line up in a narrower shape to block the central areas, then close down the wings. Roma were thus able to exploit the passing channels on a few occasions. 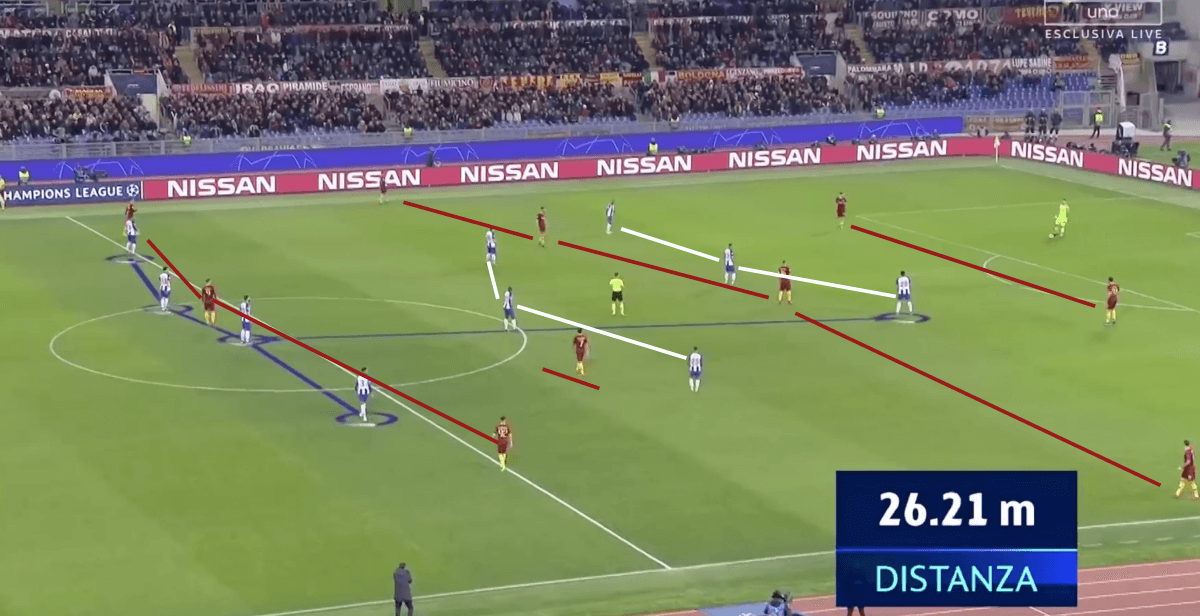 In addition, Roma did not rely as much on building from the back since they were able to counter-attack. The basic idea behind Roma’s attacking plan was to seek crossing opportunities to utilise their tall players in the penalty area.

In the second 45 minutes, Roma became more dangerous through counter-attacks due to the fact that there were bigger spaces to exploit. Thus there were a couple of good opportunities before Roma grabbed the lead, like the situation below where Roma have taken advantage of the space around the penalty spot.

Another change in the game was that Roma did not press as they did in the first half. Therefore, Porto were able to reach the attacking third more often. When this occurred the full-backs pushed forward and occupied high positions which allowed the wingers to move infield. Porto then tried to overload Roma’s last line and in between the lines.

However, when Roma moved into their 4-5-1/5-4-1 defensive structure it did not allow too much space. As the images above show, lines were tight. Porto could not utilise the four players in between the lines.

The Primeira Liga leaders need more, especially in attack, to beat this Roma in the second leg and advance to the next stage. It was crucial that they scored one away goal at least, and with this slight victory Porto’s chances are still alive.

Despite Roma struggling in Seria A – they only lie sixth – the Champions League is another competition, as Real Madrid could tell you. Roma showed strong counter-attacking play and even their crosses were very dangerous. It will be interesting to see if they could replicate last season’s heroics and make it into the semi-finals.