In Italy’s Serie A, Juventus, Inter and Milan are the three traditionally huge football clubs. Just behind them we have the likes of Roma, Lazio and Napoli. One club that also belongs to the group just behind the three huge striped teams is Fiorentina. La Viola have beautiful shirts, a lovely stadium and superstars such as Gabriel Batistuta, Roberto Baggio and Rui Costa have all had brilliant spells at the club. However, the last few years has been tough for the club and they’ve failed to be the European constants they potentially could be.

As this tactical analysis will show though, the future in Florence should be bright with a good coach in Stefano Pioli and a talented group of players assembled by the experienced sporting director Pantaleo Corvino. This analysis will look at Fiorentina’s recruitment, Pioli’s preferred tactics and the statistics behind their season so far.

Corvino is a wily old fox in Italian football. He rose to prominence at the turn of the century at Lecce, where he signed the likes of Cristian Ledesma, Valeri Bojinov and Mirko Vucinic while creating an exciting team. He then moved to Fiorentina in 2005 and built the team that reached the knock-out rounds of the 2009/10 Champions League with players like Luca Toni and Adrian Mutu and then became European mainstays with players like Stevan Jovetic, Adem Ljajic and Artur Boruc.

What’s always been clear in Corvino’s work is his contacts in Eastern Europe which he’s always used as a cheap market to get talented players he can then sell on for a huge profit. Corvino has now been back at Fiorentina since the summer of 2016 and we’ve seen him build a substantially younger squad than the one he inherited. Players like Borja Valero, Jakub Blaszczykowski and Nikola Kalinic has left and been replaced with the likes of Giovanni Simeone, Marco Benassi and academy player Federico Chiesa.

Corvino has also signed other young players with potential such as Nikola Milenkovic, David Hancko, Marko Pjaca, Dusan Vlahovic and most recently Jacob Rasmussen and Hamed Traore from Empoli. We can again see him dipping into the Eastern European market with his signings. They’re proving successful too; Milenkovic was signed for €5m and is destined to leave soon for a around €45-55m.

Corvino has also picked up more experienced players from clubs where they were not perhaps getting the game time they wanted or he simply saw a good player. The likes of Luis Muriel, Jordan Veretout, German Pezzella and Vitor Hugo spring to mind. All four are now vital to the young squad. The addition of Muriel has been very successful so far as he’s become the missing link in the front three. With him alongside Simeone and Chiesa, Fiorentina finally have an attacking trio that works together.

The likes of Kevin Mirallas, Pjaca and Riccardo Saponara haven’t worked as the third attacker but Muriel seems to be just what Pioli’s attack was missing. By building such a young squad and adding a few more experienced players to the mix, Corvino has been planning for the long-term future. Now we are starting to see the fruits of his work. Next season will be when Fiorentina are really expected to push up the table.

Fans of Fiorentina reading this will definitely remember Paulo Sousa’s spell as coach at the club from 2015/16 and 2016/17. The first six months of his time in charge saw Fiorentina challenge at the top of the table playing an exciting brand of positional play with the likes of Valero, Federico Bernardeschi, Matias Vecino and Josip Ilicic shining.

Every single player of that side, which also included Milan Badelj, Kalinic, Gonzalo Rodriguez and the late Davide Astori, has left the club along with Sousa. Still though, Sousa’s fluid setup remains. Pioli has made his own tweaks to Sousa’s system but some principles remain. Let’s look at these.

First of all Fiorentina usually defend in a man-orientated 4-4-1-1/4-4-2. This differs from Sousa’s more positional defence. What’s interesting is the way the team rotates in possession. Sousa’s side created a 3-2-4-1 but Pioli is more flexible and uses either a 3-5-2 or 3-4-3 in attack. The picture below highlights the attacking shape against Napoli. 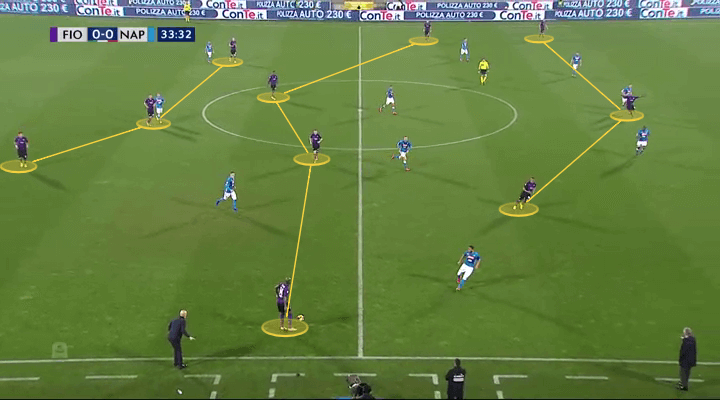 They create this shape with the following rotations. The right-back moves into the centre and becomes a third centre-back while the left-back pushes on down the wing. The two central midfielders remain in place centrally while the right-winger stays wide but the left-winger comes inside. The front two then takes up different positions. In the above example the left-winger moves higher and plays quite wide but if they had attacked in a 3-5-2 then he would have acted as a third central midfielder.

Federico Chiesa has become a key man for Pioli, not simply because of his immense talent, but also because of his ability to play wide as well as centrally. That makes him an option for either the touchline-hugging right-wing, the more centered left-wing position or one of the two striker roles.

Chiesa’s pace makes him one of Fiorentina’s main threats. He showed this to devastating effect in the 7-1 mauling of Roma in which he scored three goals with two, including the one highlighted below, coming on the break. 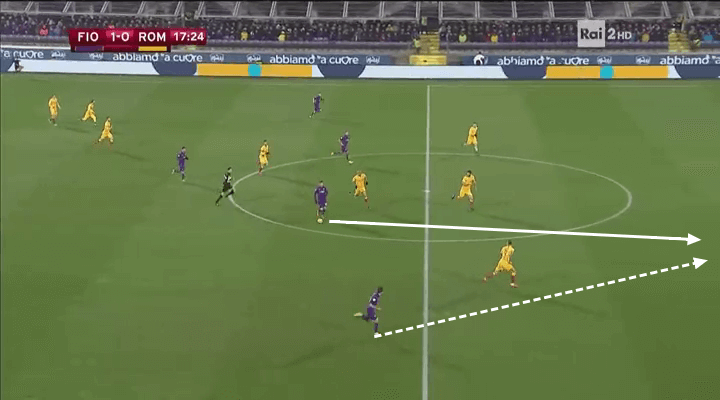 Fiorentina are extremely dangerous on the counter-attack with Chiesa and Muriel always looking to get in behind the opposition. Giovanni Simeone is another who looks to stretch defences vertically. Their willingness to make runs coupled with the quick-passing combinations Fiorentina often display in the middle of the park make the side hugely threatening on the break.

Fiorentina are also very organised and methodical in possession as they look to build attacks from their goalkeeper Alban Lafont. The back three provide the base, and then they have lots of movement in midfield to open up space to play into the attackers. One key aspect of their positional play is the role of the wider centere-backs. They are regularly seen stepping out with the ball looking to attract pressure from the opposition.

The image below show the young David Hancko (yellow) stepping out with the ball. Chiesa (white) has shifted to the centre and become an option between the lines while left-back Cristiano Biraghi pushes forward down the wing. 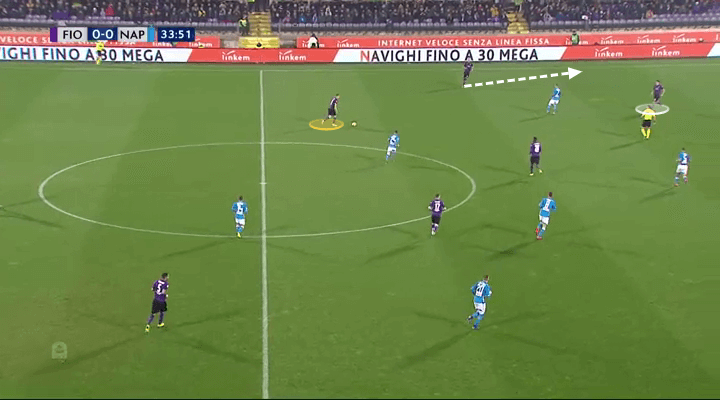 The most important part of Fiorentina’s attacking play, however, is the creation of passing angles in the form of triangles and diamonds across the pitch. The below image highlights such a diamond on the left wing. We see Hancko, the left-sided centre-back, in possession with left-back Biraghi wide, left winger Chiesa at the top of the situational diamond and central midfielder Veretout in the middle.

The players are positioned at different heights to get into spaces between the lines of the opposition. This type of positioning creates a minimum of two passing options for Hancko at all times with the wing always open and at least one of the two central options usually free too. 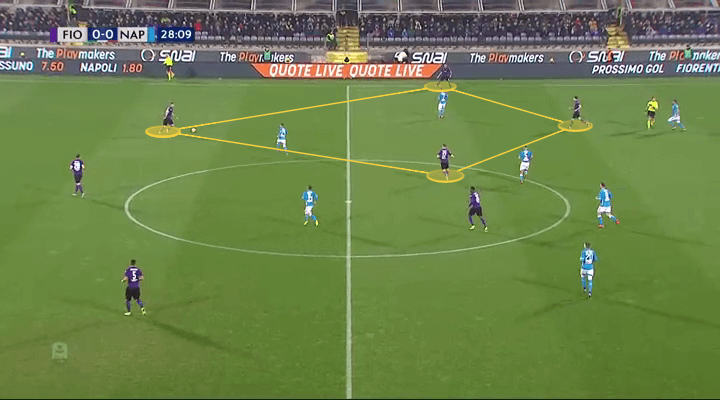 Defensively, Fiorentina defend in a man-orientated fashion from a 4-4-1-1/4-4-2 shape. The image below shows their man-orientated nature as they look to remove Napoli’s option of building from the back. They push the front two, both wingers and one central midfielder high to mark their direct opponents and force Napoli into going long. 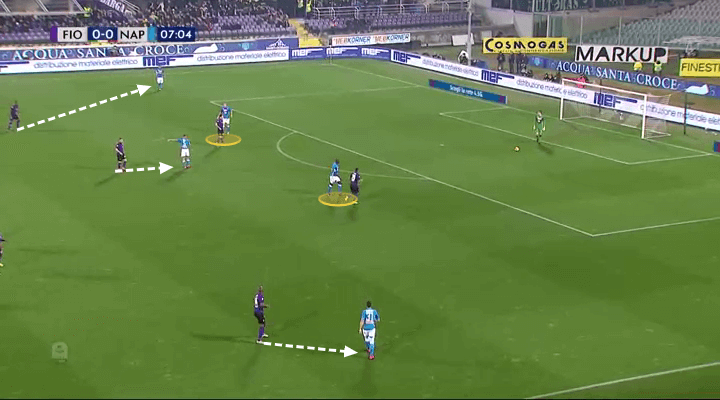 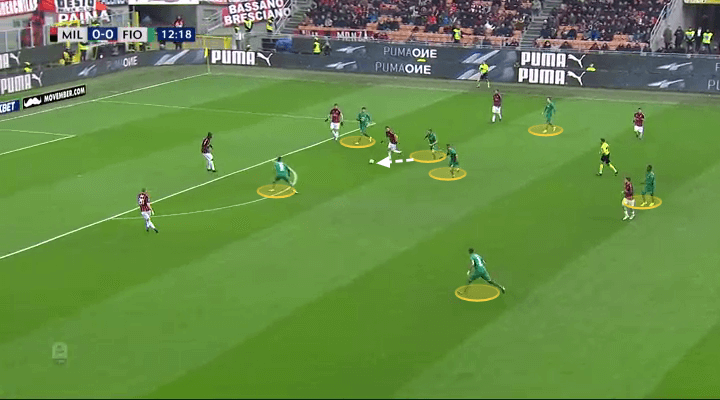 One key to their defensive approach is strong overloads to the ball-near side. In the image below we can again see seven players very close to the Napoli player in possession as he tries to play out of pressure. Fiorentina are aggressive and win the ball back again before going on a counter-attack.

The compact nature of this defending works well as they win the ball back, since they are very adept at playing a few short passes before breaking at pace through the attacking players who are all positioned close to one another. 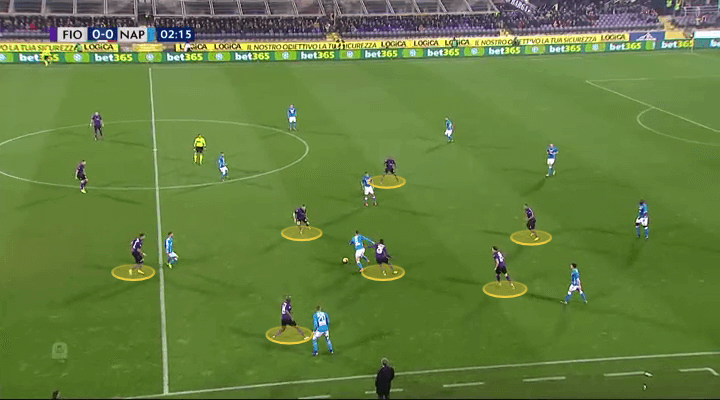 A final aspect of Fiorentina’s defending that makes them so intriguing to watch is their counter-pressing. Their attacking positioning puts them into great positions to counter-press upon losing possession. When they do counter-press they do so in a man-orientated manner.

The image below is one example. Napoli have just won the ball on the right as Callejon is about to play a pass back to his centre-back. Biraghi provides instant pressure, Veretout marks Allan in the middle and Gerson is ready to pounce once the ball is played back. As the ball arrives Gerson presses, the ball is played long, and Fiorentina regain possession. 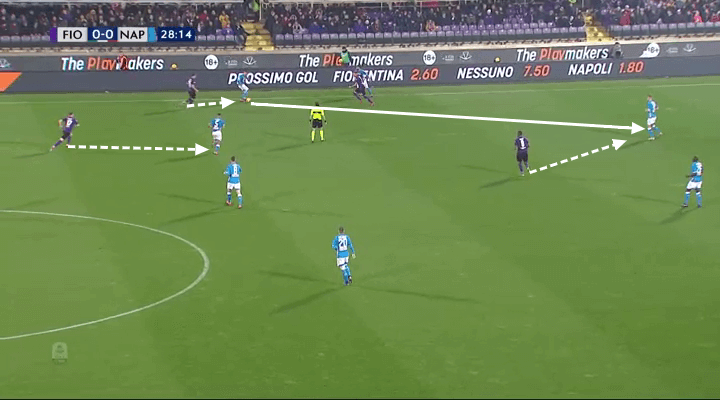 Fiorentina are a very attacking and aggressive side which their statistics show. They have scored 33 goals in Serie A, ranking seventh in the league ahead of the likes of Inter, Lazio and Milan. They are also eighth for shots per game. Given the fact they’ve struggled to find that third attacker Luis Muriel is proving to be, that’s quite impressive.

The statistics also show some problems though. They’ve conceded 25 goals, which ranks as the joint-sixth lowest total but is still too much. This is mainly because their five conceded from set-pieces have proved hugely detrimental. The 14 they’ve conceded from open play is a rather good tally for a young team.

If they can cut out the defensive mistakes they’ve been making, continue improving their attack and keep their very talented squad together Fiorentina will be very exciting to watch next season.

With Pioli as the coach, a talented squad with some quality senior players and a few new signings to come in the summer, Fiorentina’s future looks really bright. If they can keep hold of the likes of Chiesa and Milenkovic while Traore proves to be the revelation I expect then Fiorentina can possibly even push for fourth spot next season. A return to Europe should be possible at the very least. The 7-1 win against Roma in the Coppa Italia highlighted their potential. Now it’s up to Pioli and Corvino to get them to take the next step.