Another stoppage-time goal for Wolves meant that they earned a late point against Newcastle on Monday evening. This was the fifth time this season that Nuno Espirito Santo’s side have scored after the 90 minute mark this season, a league high.

On previous occasions, some goals have mattered, others not so much. Most recently, the winner in the 4-3 game against Leicester obviously mattered. The second against Bournemouth in December was less crucial, although it did kill the game completely.

Of the other two, one also came against Newcastle earlier in the campaign as Matt Doherty got the winner at St James’ Park. Last but by no means least was Adama Traore’s goal against West Ham at the London Stadium which gave the Black Country side all three points.

As we touched on in the preview, Wolves have struggled against Premier League sides in the lower echelons of the table. With time running out on Monday, it looked set to be much of the same. In this tactical analysis, we are going to compare Wolves’ performance against Newcastle to that when they faced Huddersfield and Crystal Palace. On paper, Wolves should have picked up nine points from those three games. In reality, they only picked up one.

There were no surprises from either Nuno or Rafa Benitez when it came to personnel. Positionally, the only real shock from the Newcastle manager was the Isaac Hayden was deployed slightly further forward than usual which meant that at times, Sean Longstaff acted as a single pivot in front of the back three.

Despite the similarity in formation, the average positions of the home and away side couldn’t be starker as you can see below. 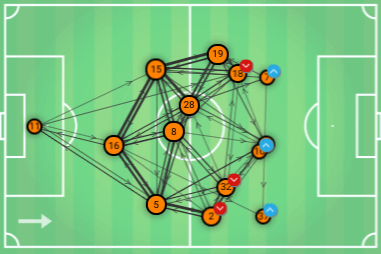 Furthermore, Wolves completed almost 200 more passes than Newcastle. However, it was the away side who took the lead.

For all of the plaudits that Boly got for scoring the late equaliser, there is no question that he was at fault for Hayden’s goal. Before I go into detail with it all, you need to have a look at the below image taken just before Fabian Schar slides the ball through.

Moutinho can’t get to the ball quickly enough. All the same, it shouldn’t be a situation that raises too many issues as Boly is relatively close to the eventual goalscorer. Even though Boly is practically within touching distance, his body shape lets him down as instead of being side on and ready to go, he’s facing the ball which means he needs to turn to chase Hayden.

As the late, great Brian Clough once said: “It only takes a second to score a goal.” That’s precisely what happened. Coady’s path follows the white line as he presumes Boly has got Hayden’s run covered, but he doesn’t. If he had followed the red one, he would’ve stopped Hayden dead in his tracks. Fine margins, indeed.

Considering all of the above – Boly’s body shape, Coady thinking he has it covered etc – none of that should’ve really mattered. Rui Patricio, in the Wolves goal, has to be doing better. He thinks that Hayden’s going to shoot across him, but the Newcastle man goes for the near post and Rui effectively ends up pushing it into his own net.

Deep in stoppage time, Boly rose highest to head home Adama Traore’s cross. Martin Dubravka completely misjudged the flight of the ball as Boly headed it into the empty net. In some quarters, there were questions of a foul on the Newcastle keeper, but it was just a case of Dubravka getting it wrong, Boly getting it right and the spoils being shared. Nuno’s side should’ve put the game to bed long before that moment, before Hayden even put Newcastle into the lead.

Wolves’ domination in the game is emphasised by the xG scoreline: Wolves 2.41-0.44 Newcastle. Or, an xGD (expected goal difference) of 1.87 in Wolves’ favour. The only two xG results which eclipse that are when Wolves hosted Sean Dyche’s Burnley and Manuel Pellegrini’s West Ham respectively.

From the Burnley match, Wolves ended with an xGD of 3.18 (the final score was only 1-0 in Wolves’ favour). Against the Hammers, the xGD was only marginally better than that of the Newcastle game at 1.89. The timing chart from the Newcastle game can be seen below.

As is evidenced above, Wolves were always ahead of Newcastle on the xG front, apart from the first 16 minutes or so. To illustrate this even better, let’s take a look at the respective shot maps.

Wolves had 22 shots compared to Newcastle’s nine, and double the number on target, but a combination of wastefulness and Dubravka playing well up until Boly’s equaliser kept Wolves at bay. How does this compare to the aforementioned games when Wolves faced Crystal Palace and Huddersfield at Molineux?

Steps in the right direction

When Crystal Palace visited the Black Country on 2 January, they came away with a 2-0 win courtesy of two goals in the last 10 minutes of the game. It was thoroughly deserved as the xG scoreline from that day was 0.66-1.88. No complaints can be had from that game.

When David Wagner brought his Huddersfield side to the Midlands, few people gave the Terriers a chance of getting a positive result. Just like Crystal Palace, they won 2-0. The xG scoreline? 0.70-0.63. While the final score might be unfair when you take xG into account, there’s one common denominator from the Palace and Huddersfield game that can’t be ignored. Wolves’ xG from both of those games is under 0.75.

So, with the 3-5-2 formation in place for the first time against a supposedly lesser team, Wolves created more than three times the number of chances. If that’s not progression, I’m not sure what is.

Before the game, Benitez’ side would’ve been much happier with the final score. After the game, Nuno would’ve no doubt been the cheerier of the two coaches. Wolves remain seventh, while Newcastle leapfrog Cardiff to 16th.