We haven’t done a lot of analysis on Portuguese games in the past. This will change in the future given the tactical interest the league provides. Portugal is a great exporter of talented footballers as we all know, but they export quality coaches too. The weekend saw two of the biggest clubs, Sporting and Porto, clash in Lisbon. This tactical analysis looks at the highly interesting tactical trends of the game.

Sporting, under their Dutch coach Marcel Keizer, set up in a classic 4-3-3 as the graphic shows. Sergio Conceicao lined his Porto up in a 4-4-2 when defending, but they had some very interesting movements in possession as we’ll detail below. Both teams were stacked with quality players such as Portuguese international Bruno Fernandes, former Manchester United winger Nani, Real Madrid legend Iker Casillas and the Mexican midfielders Hector Herrera and Jesus Corona.

Tactical analysis of the goalless draw

As mentioned, and as highlighted below, Porto defended in a regular 4-4-2. They kept their midfield quartet narrow while the full-backs had wider starting positions. This meant the full-back would sprint into pressure in the wide areas with the ball-near midfielder in a covering position. 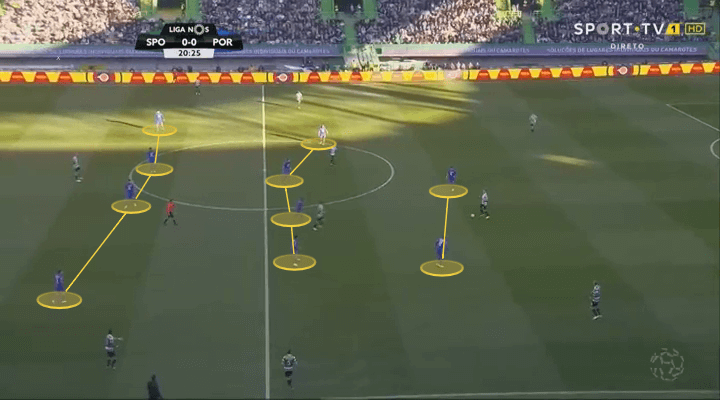 When they had the ball, however, Porto changed and moved their wide players centrally. One central midfielder, Danilo, dropped to become a defensive midfielder while the other, Herrera, moved higher into a more attacking role.

This established the midfield diamond I’ve highlighted below with Danilo at its base, Corona to the right, Yacine Brahimi to the left and Herrera at the top. The two full-backs, Maxi Pereira (white) and Alex Telles, provided width from very high starting positions. 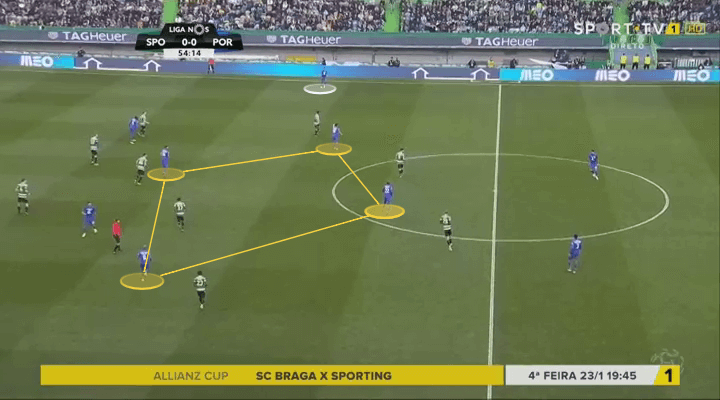 This movement can again be seen below with Telles (white) high on the left. The inverted movement of Corona and Brahimi gave Porto four central players as well as good positioning in either half-space and the central space.

It also gave them a numerical advantage against Sporting’s three central midfielders while maintaining width and having two strikers up front. The only downside was the fact Sporting enjoyed some luck by countering into the wide spaces outside the two centre-backs. 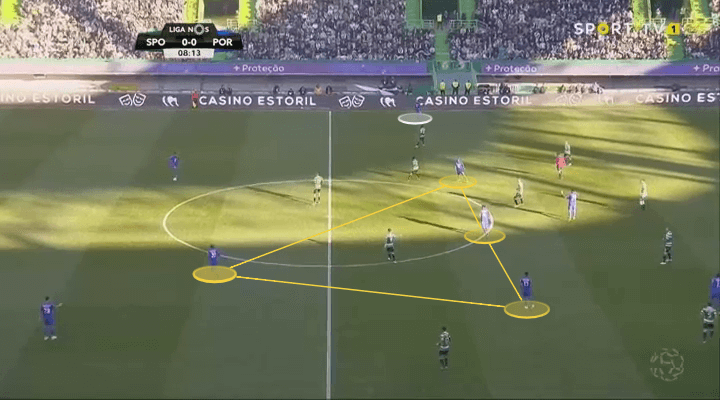 Porto had a clear emphasis on finding players between the lines. Corona, in particular, was almost always stationed in the right-sided half-space. As you can see below, he looks for the position behind Sporting’s left-sided central midfielder Fernandes.

The presence of a striker alongside Sporting’s centre-back and the high position of Pereira attracting the attention of the left-back made Corona impossible to pick up. Porto had some joy in getting into these positions but failed to create enough chances from it. 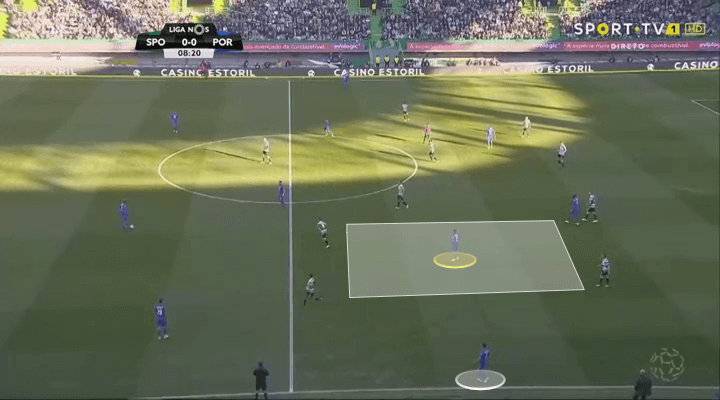 Porto’s attacking rotations were very innovative and presented Sporting with an interesting problem. We’ll look at their way of dealing with this below.

With former Ajax coach Keizer at the helm you’d expect Sporting to try and dominate games with short-passing and speedy wingers. You’d be right. Sporting always looked to build from the back by the two centre-backs splitting wide, the holding midfielder Nemanja Gudelj dropping deep and the two full-backs pushing on to join the wingers down the wings. The shape, with a very organized midfield triangle, can be seen below. 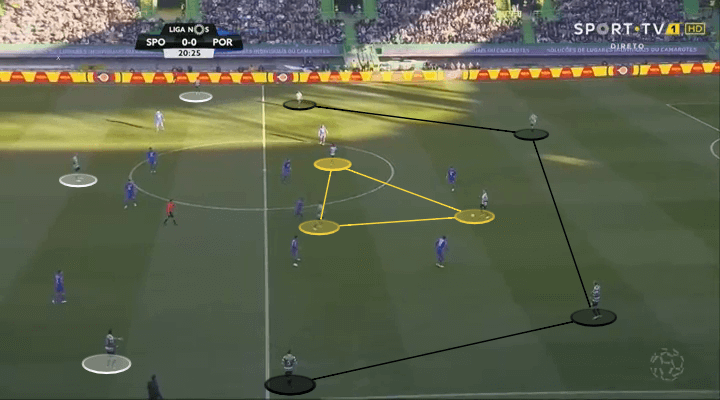 Sporting clearly emphasised building attacks from the back and they often used quick short-passing combinations to progress. We have a great example below. First, note how the wingers (yellow) always kept the width ready to attack their full-backs from the wings.

The below image shows Gudelj on the ball at the base of midfield. The Serbian is being pressed by Herrera and plays a wall-pass with Fernandes. He then receives the ball behind Herrera and has plenty of space in the centre. Sporting have attracted pressure and played through it. Gudelj could have opted for Wendel in the centre but instead sprays the ball wide to right-winger Abdoulay Diaby. 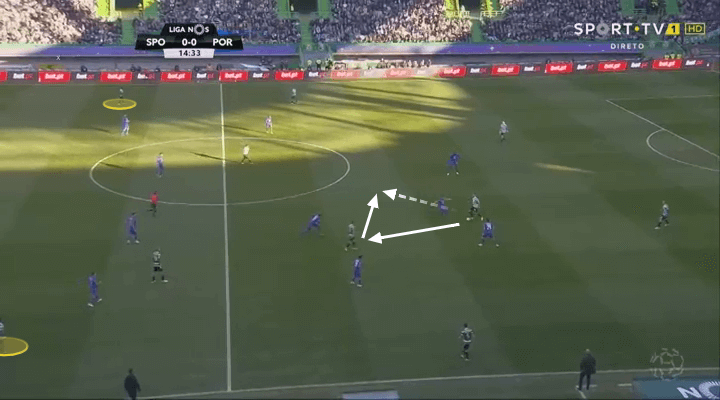 Below is an example of how structured Sporting’s positional play is. The two centre-backs split at the edge of the penalty area. The two full-backs push on down the wings. Gudelj (black) moves deep to get on the ball. Wendel (blue) positions himself between Porto’s attacking and midfield line. Fernandes (yellow) moves higher and positions himself between Porto’s midfield and defensive line.

The three midfielders positioning on different horizontal lines and in-between different lines of the opposition creates good passing options as well as causing confusion for the opposition. Fernandes, in particular, is excellent at this type of movement and positioning. 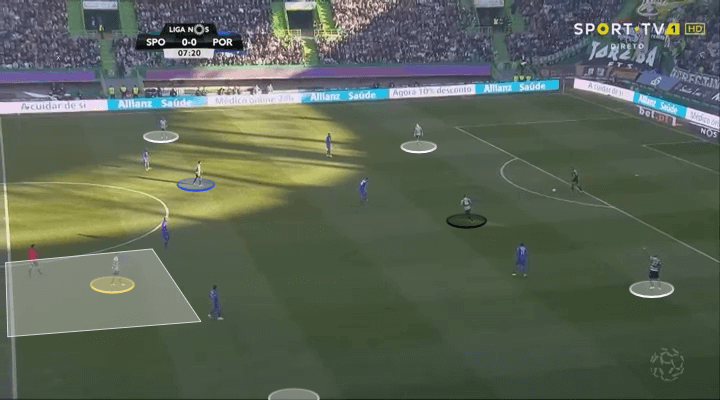 Sporting also had a clear target of finding their two attacking midfielders between the lines of Porto’s defence and midfield. Below centre-back Sebastian Coates finds Wendel (black) between the lines. 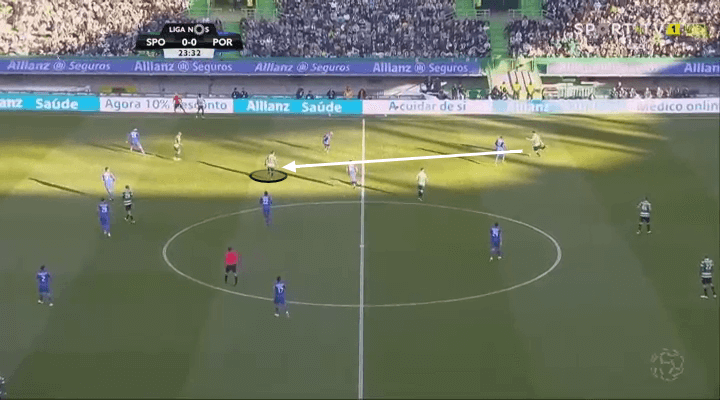 The attacking organisation and superb positioning of Sporting was impressive. Anyone should look forward to following them for the remainder of the season.

Sporting’s defensive setup was a classic 4-1-4-1. The wingers joined Fernandes and Wendel in establishing a midfield four with Gudelj balancing behind the midfield and in front of the defence. Bas Dost was alone up top. You can see the setup below. On occasions Fernandes would step up from his left-sided central midfield position to press alongside Dost in a situational 4-4-2. 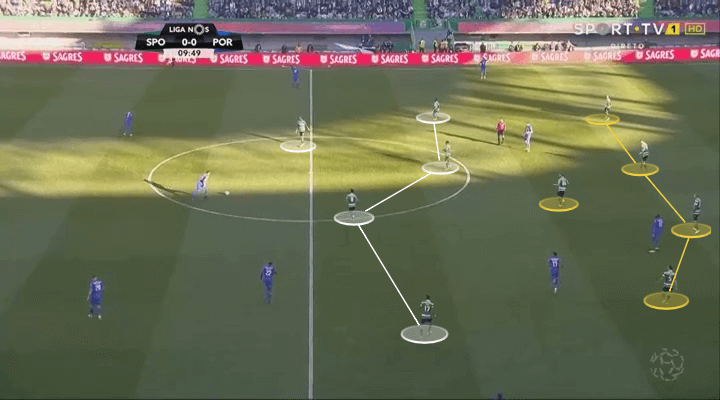 Sporting’s orientation was positional and they looked to stop Porto from accessing the half-spaces by blocking passes there. As you see below they don’t press the Porto defender on the ball, instead focusing on establishing a triangle of Nani, Fernandes and Gudelj to block the pass as the left-back Jefferson is also ready to move centrally if the ball goes through. This strategy was evident throughout the 90 minutes and led to multiple attacking turnovers. 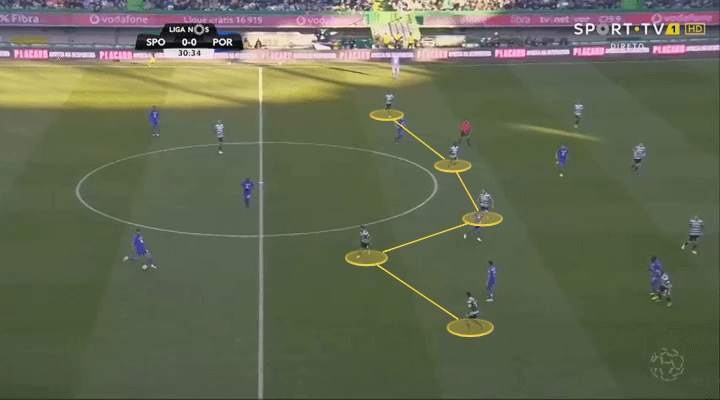 Sporting often started their pressing just in front of the halfway line, but if the ball was played backwards then they would move up to press high. They pressed high with man-orientations as seen below with Fernandes and Dost marking the centre-backs while Wendel moved up to mark Danilo. 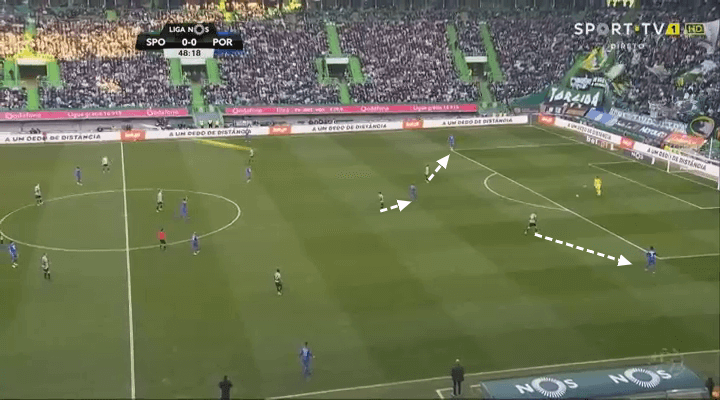 Sporting defended well, as did Porto, as both teams struggled to create clear-cut chances.

The game ended goalless and Porto remain five points clear of Benfica at the top of the table. Sporting are eight points behind Porto in fourth. The game was really well-played and the tactical patterns highlighted how interesting the Portuguese league often is from a tactical perspective.