Despite going into Saturday’s match winless in four Championship games, Norwich were still just about clinging onto second spot. They faced a West Brom side who were vying to knock them off their perch.

Indeed, it was the Baggies who carried slightly more of the impetus during the match, forcing the experienced Tim Krul into some good saves. Their team, dashed with smatterings of Premier League quality, put in a performance dubbed “fantastic” by manager Darren Moore.

What settled the match, though, were two innocuous-looking strikers’ goals. First, Dwight Gayle stole in at the near post to put West Brom into the lead. Then Jordan Rhodes responded in kind at the same near post in the second half to equalise.

West Brom must now adapt to life without the talismanic figure of Harvey Barnes, the youngster being recalled from his loan by Leicester City. They opted to go 4-3-3 with a fluid front three of Jay Rodriguez, Hal Robson-Kanu and Dwight Gayle. Robson-Kanu took the nominal centre-forward role on the team sheet, but in truth it was a front line open to rotation.

As has become almost a given with 4-3-3, the deepest lying midfielder – ex-Manchester City veteran Gareth Barry in this game – dropped between the centre-backs to aid in build up. The other two midfielders, Rekeem Harper and Chris Brunt, have decent ball carrying ability and were able to help attack with vigour.

Below can be seen an almost Guardiola-esque build up. Barry drops between the split centre-backs, while the full-backs have tucked in a little and pushed forward. 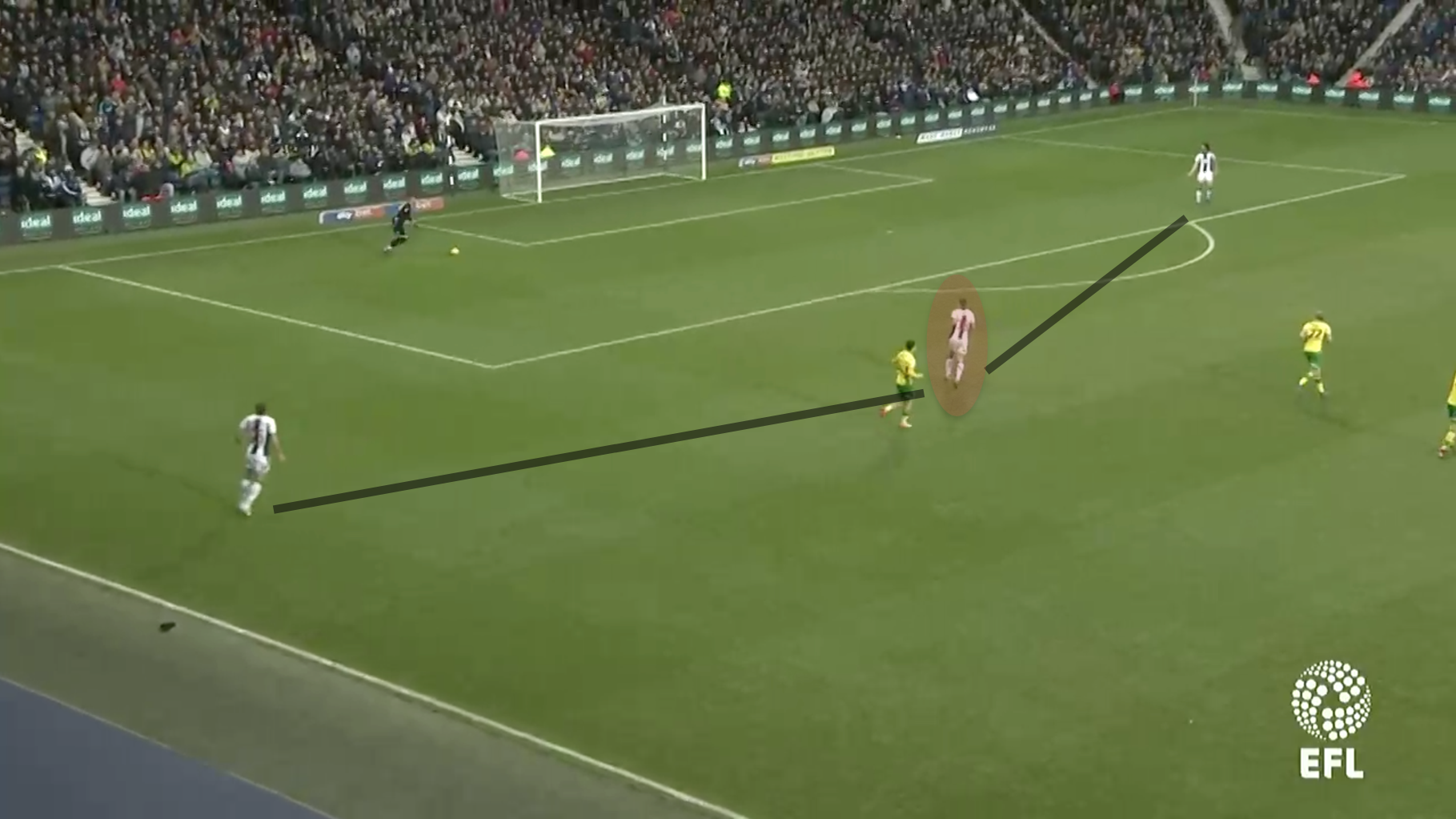 Norwich went with their tried and tested 4-2-3-1, led by Teemu Pukki. They faced some unfortunate absentees, too, with centre back Timm Klose and attacking midfielder Marco Stiepermann both omitted from the starting XI due to injuries.

Their system also bore some fairly typical features of the formation. Todd Cantwell at number 10 can be seen dropping deeper to receive the ball, while right winger Emiliano Buendia tucks in a to get involved with build up play. Full-back Max Aarons – circled below – hugs the touchline to help maintain width in attack. 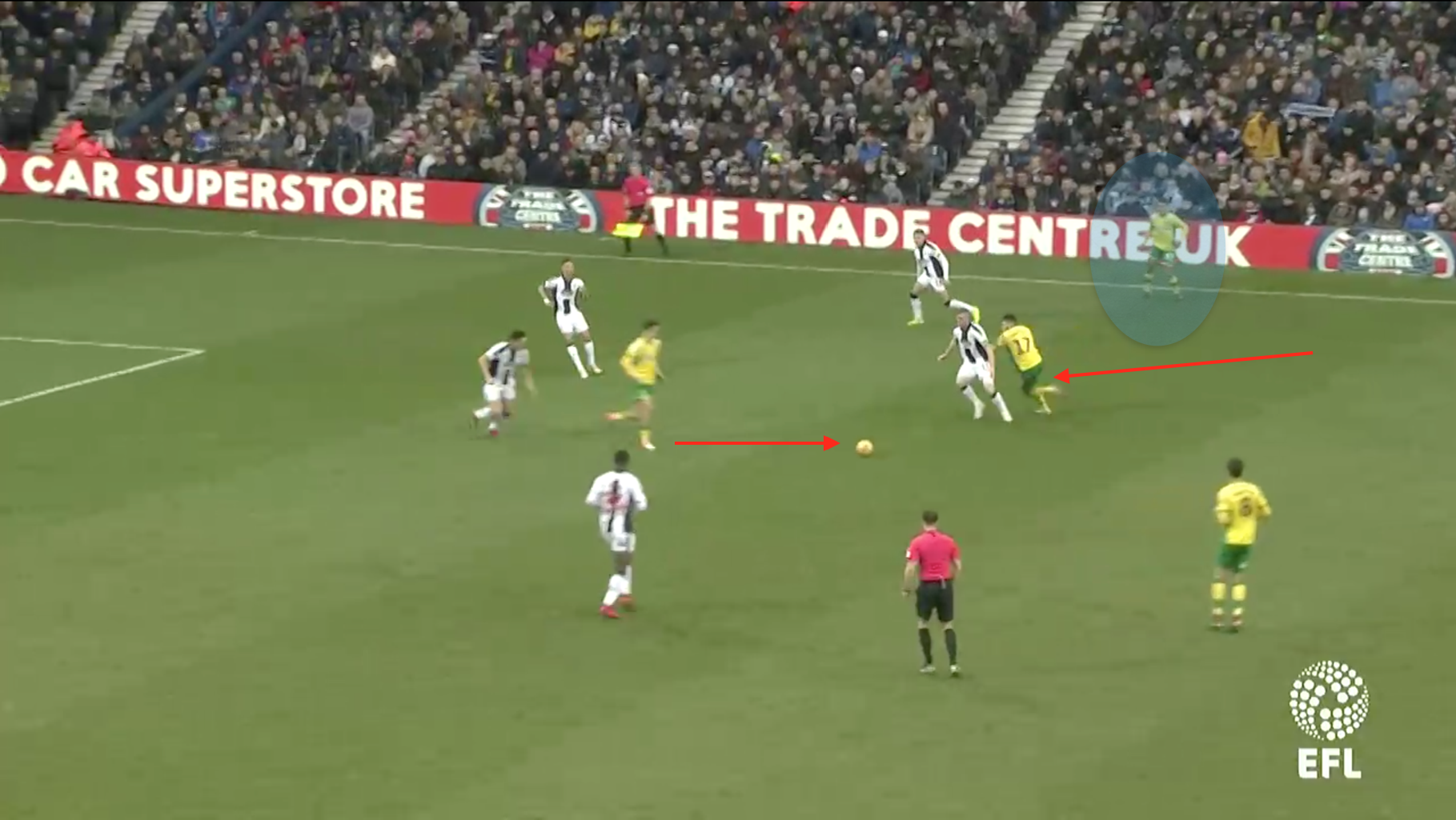 Both systems, in different ways, incorporate a fluidity in attack. The weaknesses, though, can be seen in the gaps out wide. Both a 4-3-3 and a 4-2-3-1 can have a tendency to leave the full-backs a tad exposed when defending, and it is something that West Brom could be seen exploiting in the game.

It seems that West Brom had highlighted the right-hand side as an area to target. At the very start of the game, they worked the ball out to the onrushing Mason Holgate after a surging run from Rekeem Harper, as we can see below. 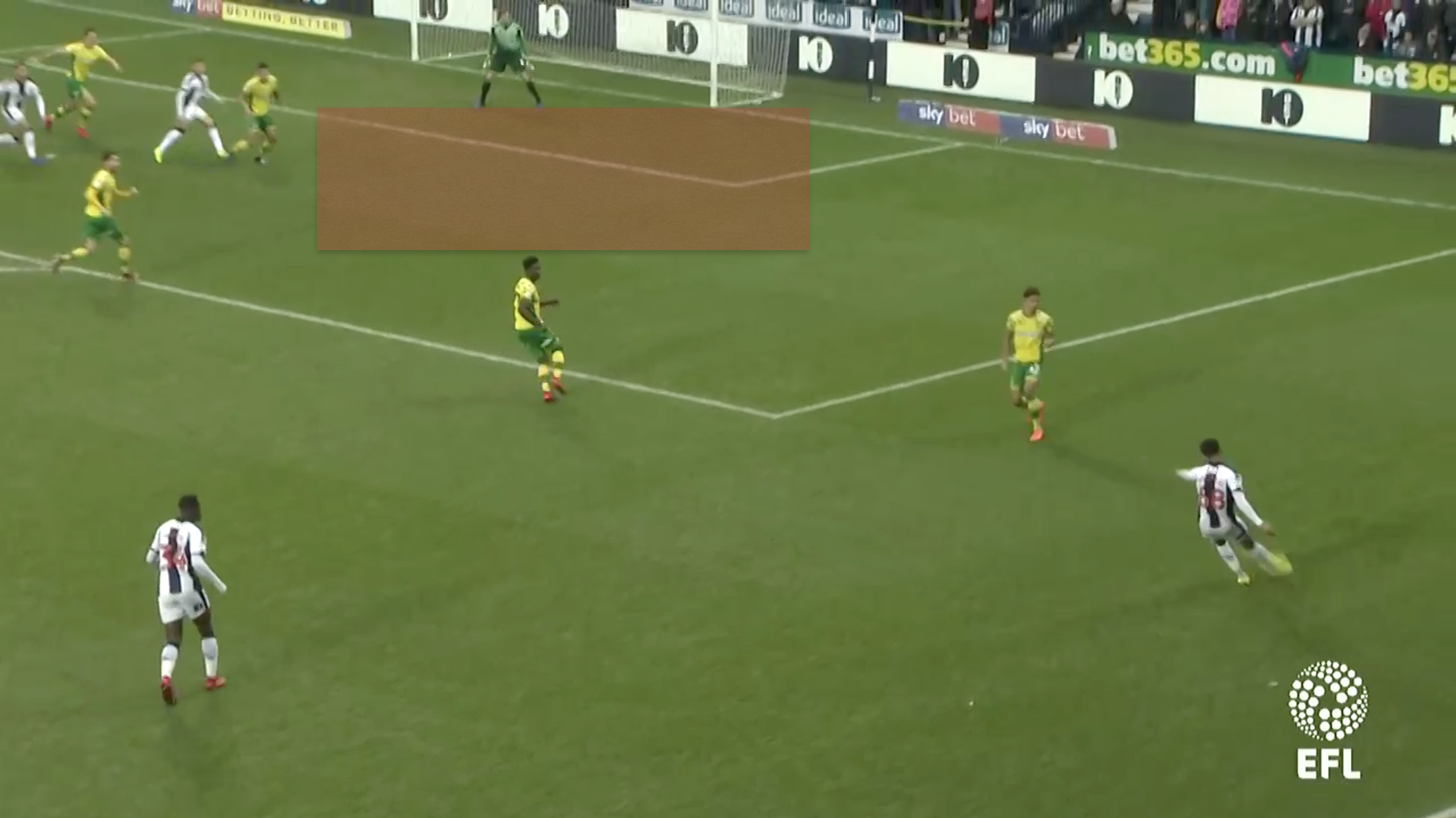 Holgate’s delivery in this instance is not great, but it shows an area that West Brom attempted to exploit. While 4-2-3-1 is, in many ways, an extension of a basic 4-4-2, it does naturally encourage wingers to push a bit further up. This leaves space to be exploited in front of the full-back, which the Baggies targeted.

Jamal Lewis comes over to cover, but there is a big gap left between him and the centre-back, one that will eventually be exploited for the goal. On this occasion, Mario Vrancic makes a covering run back into the box to clear the cross.

It could well be argued that this was something manager Darren Moore picked out in his preparation for the game. It is a ploy that ended up paying a healthy dividend in the form of the opening goal for West Brom.

Dwight Gayle’s opener for the Baggies provides a textbook example of good striker movement. The 29-year-old starts at the back post, and runs across both centre-backs before nipping in at the near post to turn home Mason Holgate’s excellent cross. 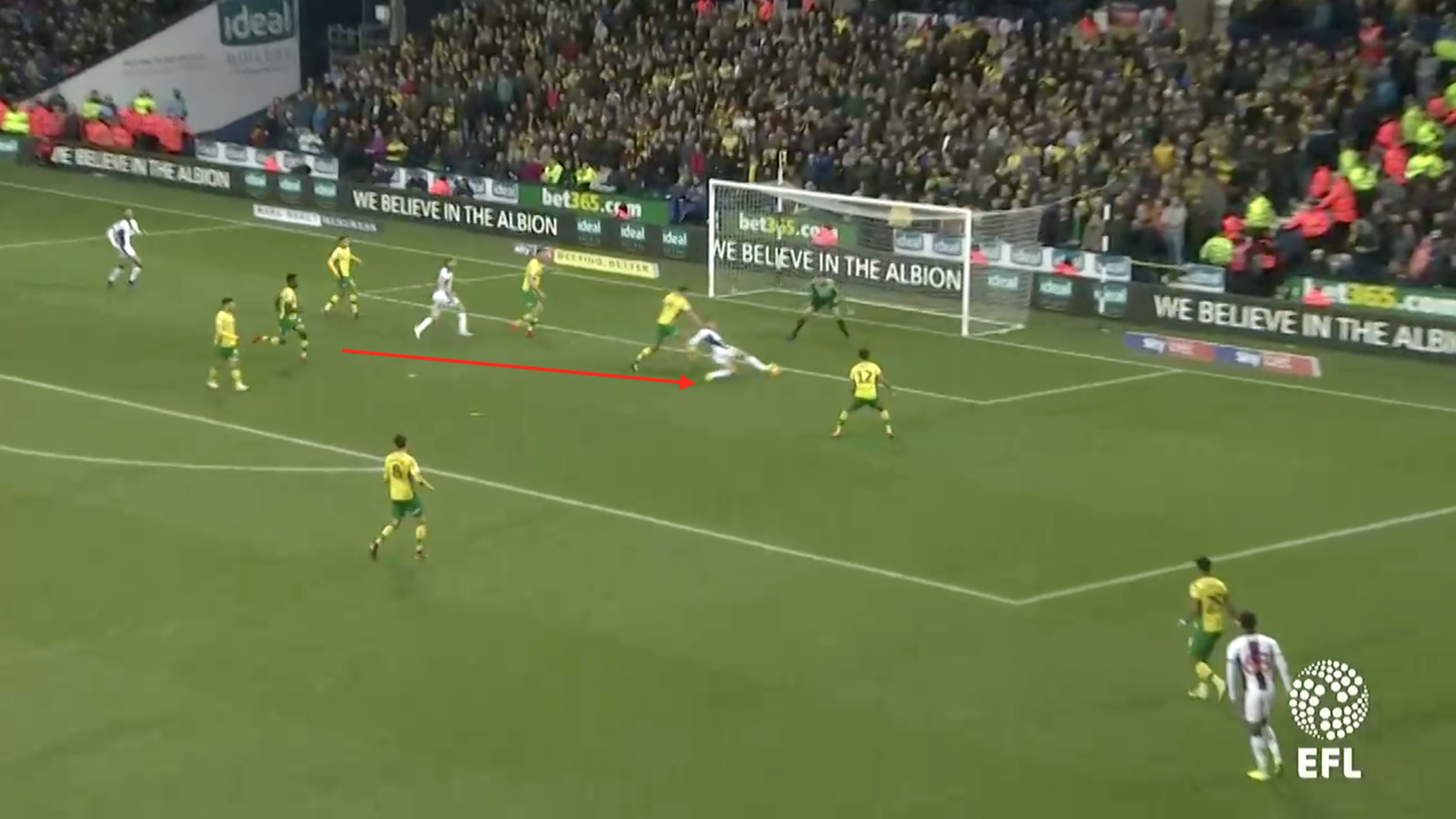 It’s a great bit of movement from Gayle as he deceives both the Norwich centre-backs, particularly Ben Godfrey who is covering the near post area. While the movement is clever from Gayle, Godfrey must be more aware of his surroundings in the box and where the opposition strikers are. It is a bit too easy for Gayle to slip in front of him to turn the ball in.

As discussed previously, the right-hand side appears to be an area West Brom targeted. It still required the intelligent movement of an experienced forward to finish the chance off. Kudos, too, should go to Holgate for a superb delivery.

Norwich, unsurprisingly, opted for Teemu Pukki to lead the line once again. The Finnish striker has 15 Championship goals to his name this season, and had a good chance to send his side into the lead when he stole in front of Ahmed Hegazi. He could not, however, turn his header in past Sam Johnstone, as can be seen below. 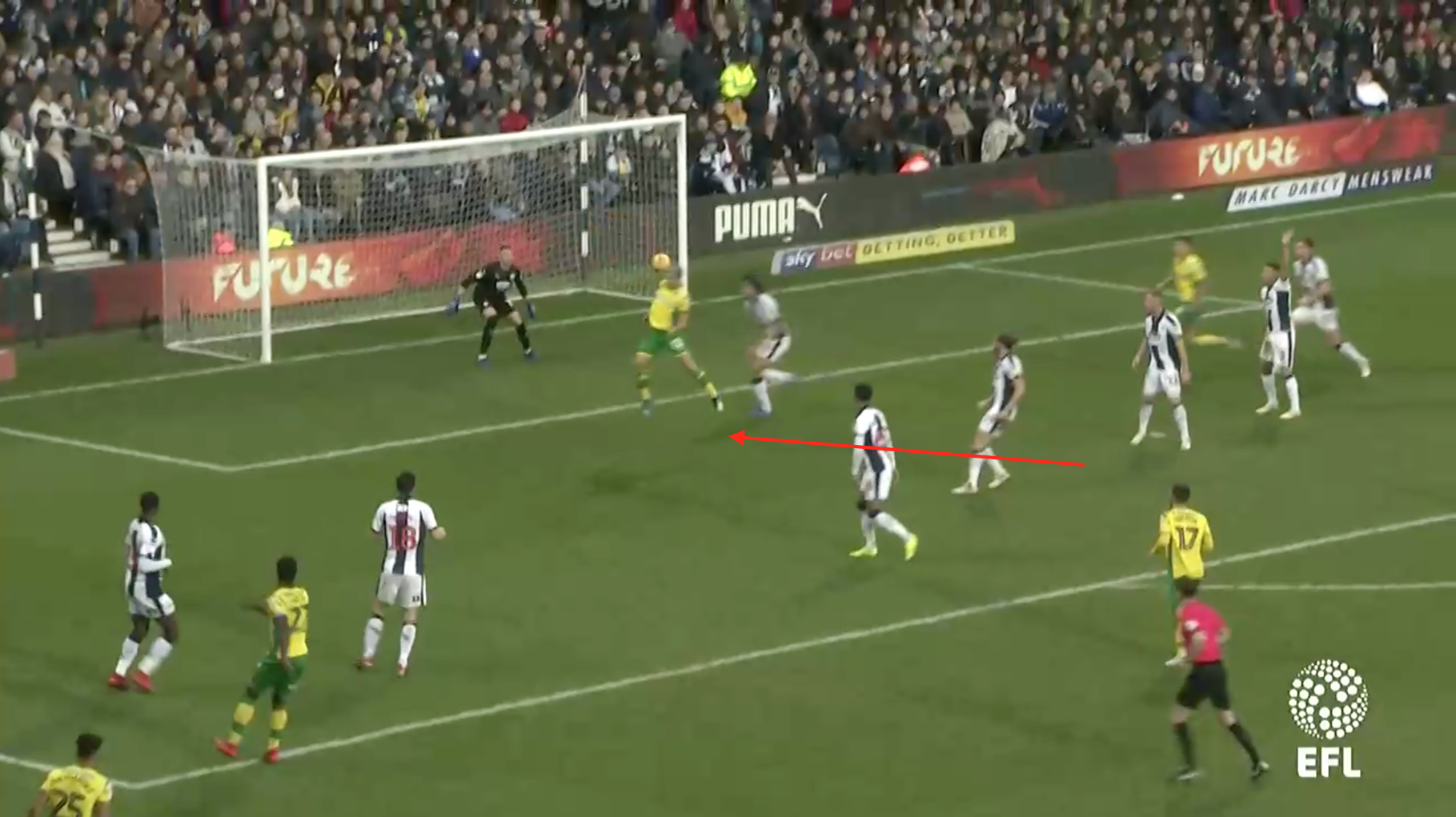 It was an inexplicably bad bit of organisation from West Brom, who seemed unable to reset themselves properly after defending a corner. Again, this appeared to be some sort of foreshadowing for Norwich’s goal, which came from another defended set piece that the Baggies failed to reset from.

This time, though, Norwich now have an added penalty box threat in the shape of Jordan Rhodes. The Canaries see a free kick blocked, before the ball is fired straight back in. West Brom completely fail to reorganise. We can see below that while Pukki has been marked, Hegazi is picking up two Norwich players, including Rhodes. Several West Brom players are simply standing in no mans land. 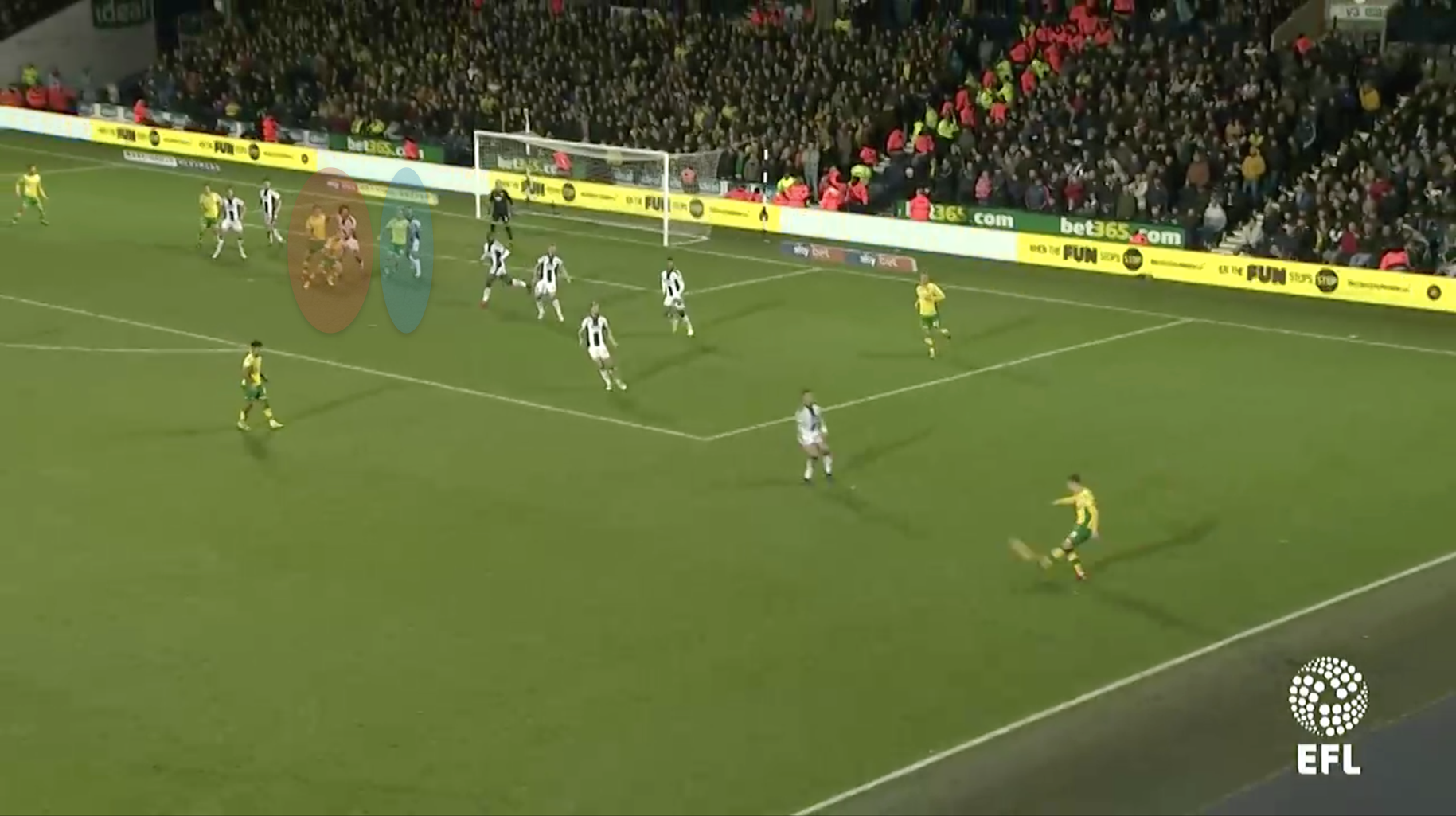 The ball comes in and Pukki steps up, drawing both West Brom defenders with him. Rhodes makes a move in front of Hegazi – who is in a pickle being stuck with two men – and dashes in at the far post to turn the ball home. It’s a clever bit of play from Pukki to help open up the gap for Rhodes, but disastrous defending from West Brom. 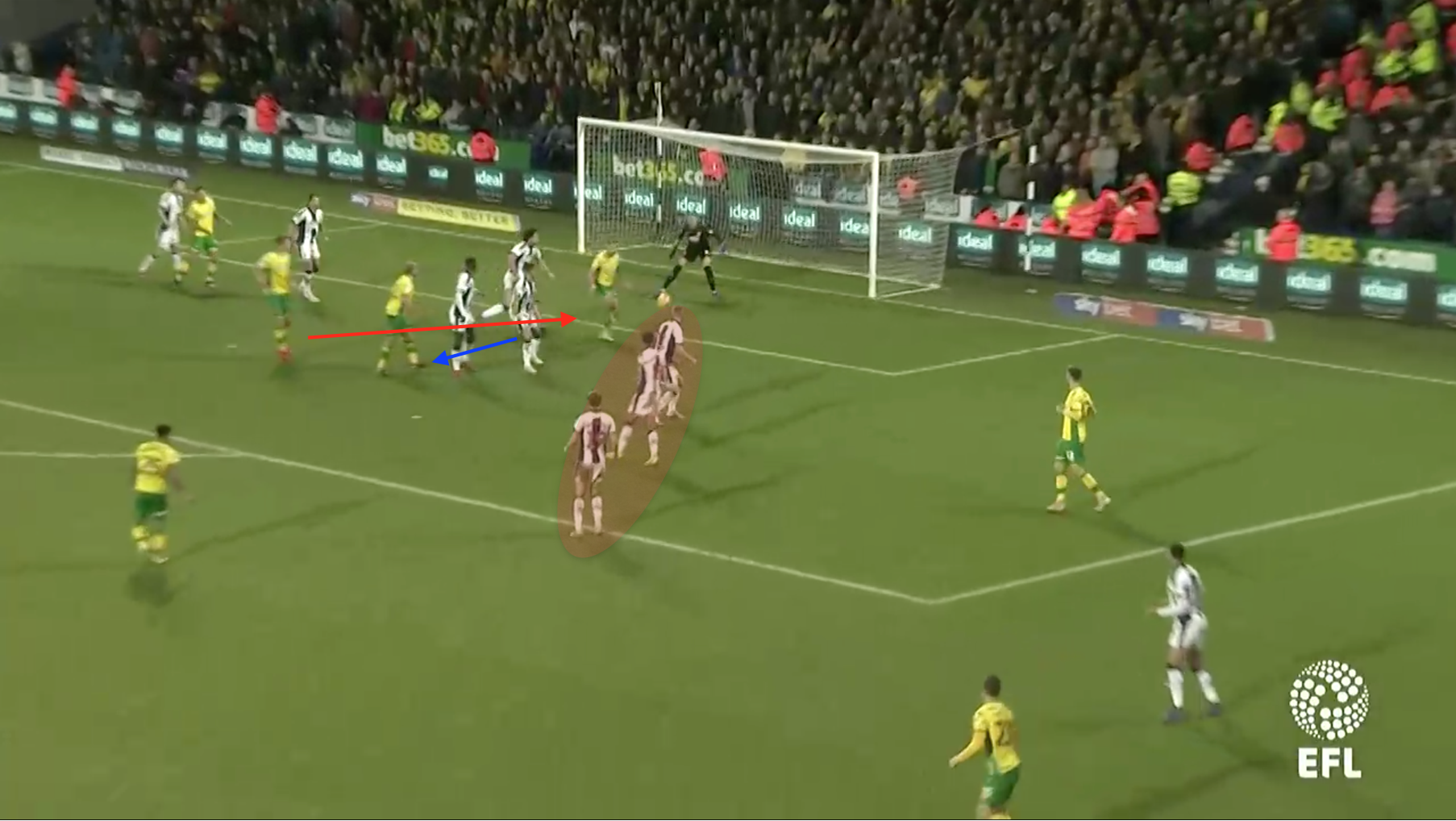 This was a well fought contest between two sides vying for promotion from the Championship. West Brom arguably had the edge, but they had to be at their best against a very accomplished Norwich side.

Mason Holgate was the standout performer. Alongside his assist, he made six tackles and completed a match-high four dribbles. Mario Vrancic also had an imposing game. The Norwich midfielder made nine tackles and had a pass success rate of 80%.

The result itself was not too hotly contested by Darren Moore and Daniel Farke. Both seemed content to share the points as they oversaw pleasing performances from their sides. The draw does, however, see Sheffield United climb above both teams into second place on goal difference.