Preston North End and Swansea City shared the points at Deepdale this weekend in the EFL Championship as Courtney Baker-Richardson’s opener early in the second half was cancelled out from the penalty spot just five minutes later.

Preston manager Alex Neil drafted in two new January signings into his starting XI (Brad Potts and Jayden Stockley) as they looked to improve their form after an inconsistent season so far. Graham Potter, meanwhile, kept an unchanged side from the one that beat Aston Villa 3-0 at Villa Park last weekend in the FA Cup third round, as he looks to build momentum in the second half of the campaign.

As expected, both sides adopted a 4-2-3-1 formation. It was going to be interesting to see how Swansea City would cope up against a more effective and organised high press from the home side after breezing through both Aston Villa and Reading since the turn of the year.

We closed our previous analysis of Swansea’s win at Aston Villa by insisting that future opponents surely wouldn’t make the same pressing mistakes against Graham Potter’s side – adopting an disorganised high press and leaving too much space in behind.

Unfortunately, from Swansea’s point of view, Preston adopted something of a similar press that we’ve seen from the Swans so often this season. They relied more on well-positioned players blocking passing lanes and options out from the back, as opposed to employing quick and intense pressing.

Swansea City were keen to persevere with their philosophy of playing out from the back, splitting their two centre-backs wide. Preston, however, frustrated Swansea, often forcing them into recycling possession backwards, kicking long from deep or forcing them down the sides via the full-backs. 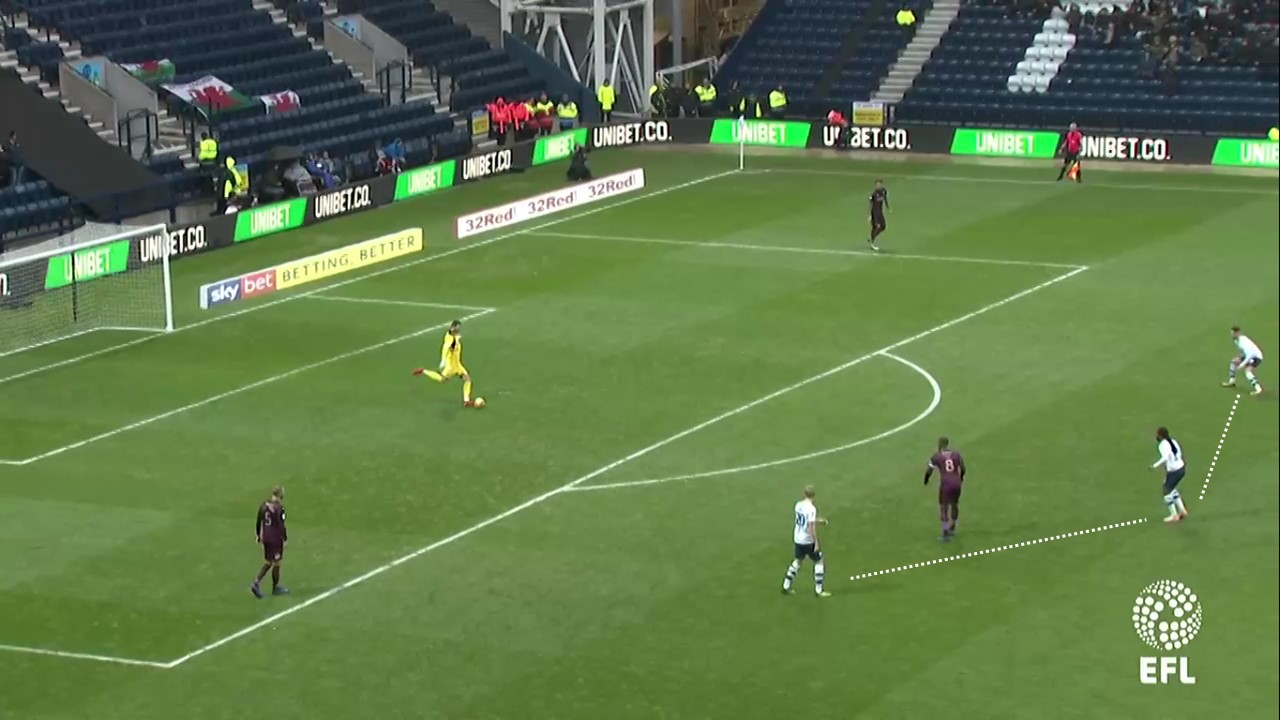 A key mistake committed by Swansea’s previous two opponents was their failure to mark their two holding midfielders, Matt Grimes and Leroy Fer. Both Reading and Aston Villa pressed the goalkeeper and two centre-backs but Fer and Grimes were always free to receive passes and turn into large areas of space.

Preston, however, got it right. Below is an example of Preston closely marking Swansea’s midfield duo, and as a result, forcing Swansea to pass back to the goalkeeper.

On occasion, although not very often, Swansea’s Matt Grimes did drop even deeper and wide into a left-back position in an effort to improve their chances of bringing the ball out effectively from the defensive third.

Grimes (circled, below), drops back into the left back spot. The reasons the full-backs don’t drop back is because they are pushed beyond the defensive line to provide forward passing lanes to the centre-backs. In addition to that, they’re also encouraged to move forward and offer attacking width in the final third.

Preston’s two players are well positioned, equally between Swansea’s deep three so they can quickly press the first receiver of the ball from the goalkeeper. 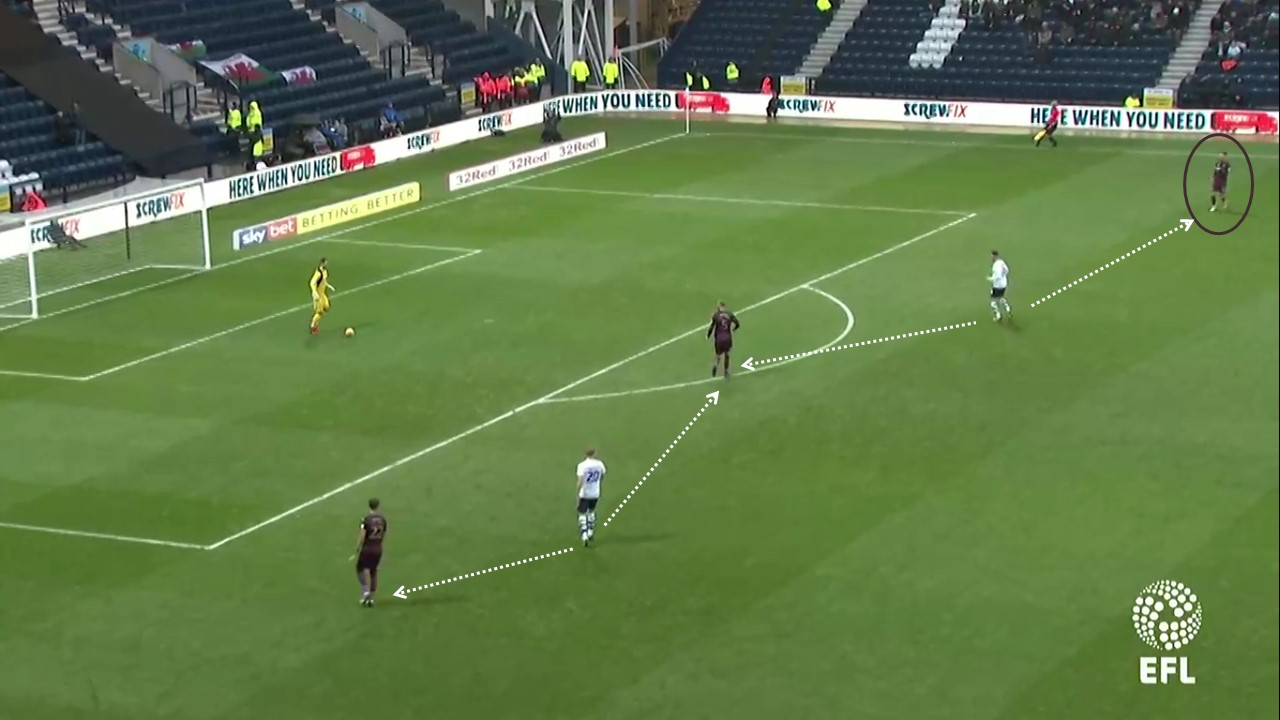 Preston often had a player blocking a passing route across the pitch from wide areas. Below’s example of this shows how the player circled blocks the passing lane to Leroy Fer. While Johnson also presses full-back Kyle Naughton, his only option is to pass back to the goalkeeper. 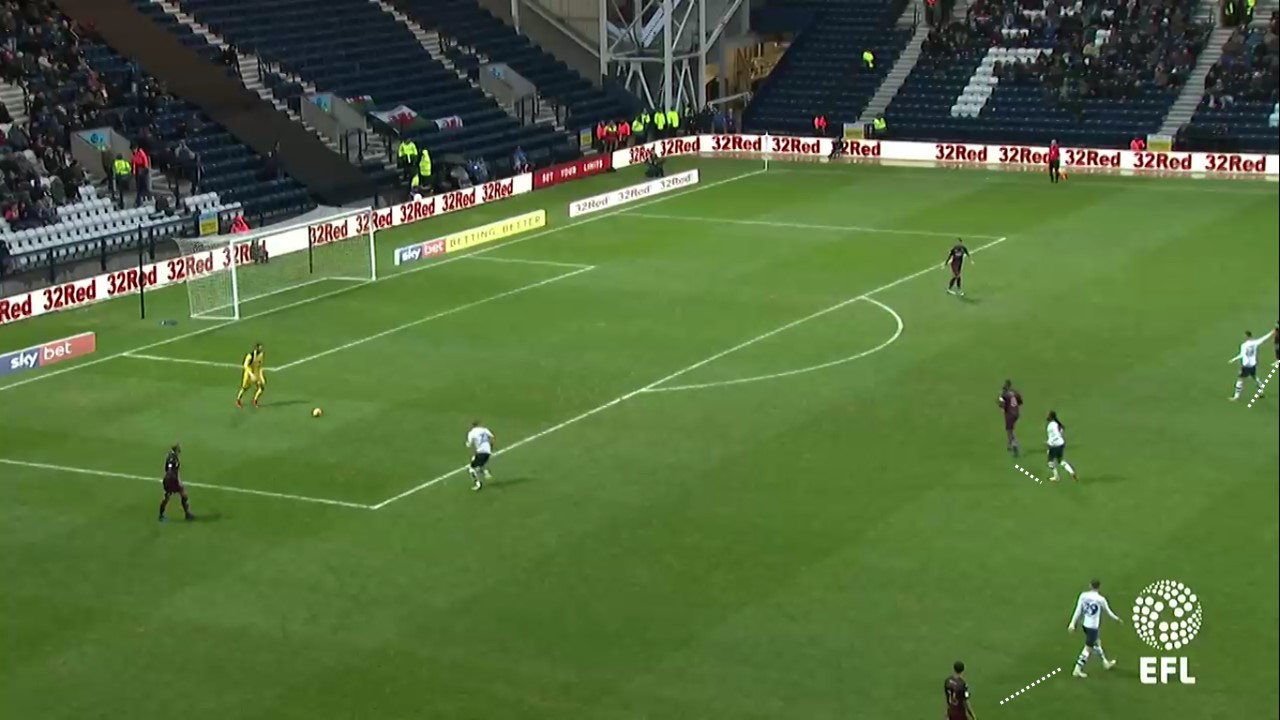 Although Nathan Dyer is free in a large area of space in the example below, a Preston player blocks the passing route to him. With a triangle of Preston players in the middle, Fer and Grimes are also unavailable to pass to.

There was the odd occasion here and there when Swansea were able to bypass Preston’s press, allowing Dyer to receive the ball in that area of space. These were few and far between.

Swansea’s use of inverted wingers continues

Swansea City continued with their use of inverted wingers, relying on full-backs for attacking width. Nathan Dyer, on the right wing in a 4-2-3-1, was actually playing more as a number 10 behind lone striker Courtney Baker-Richardson and the actual number 10 Bersant Celina.

The example below shows Dyer, circled, making a run into the middle behind Celina and Baker-Richardson. The other dotted arrow shows the left winger, Wayne Routledge, also moving into the centre. 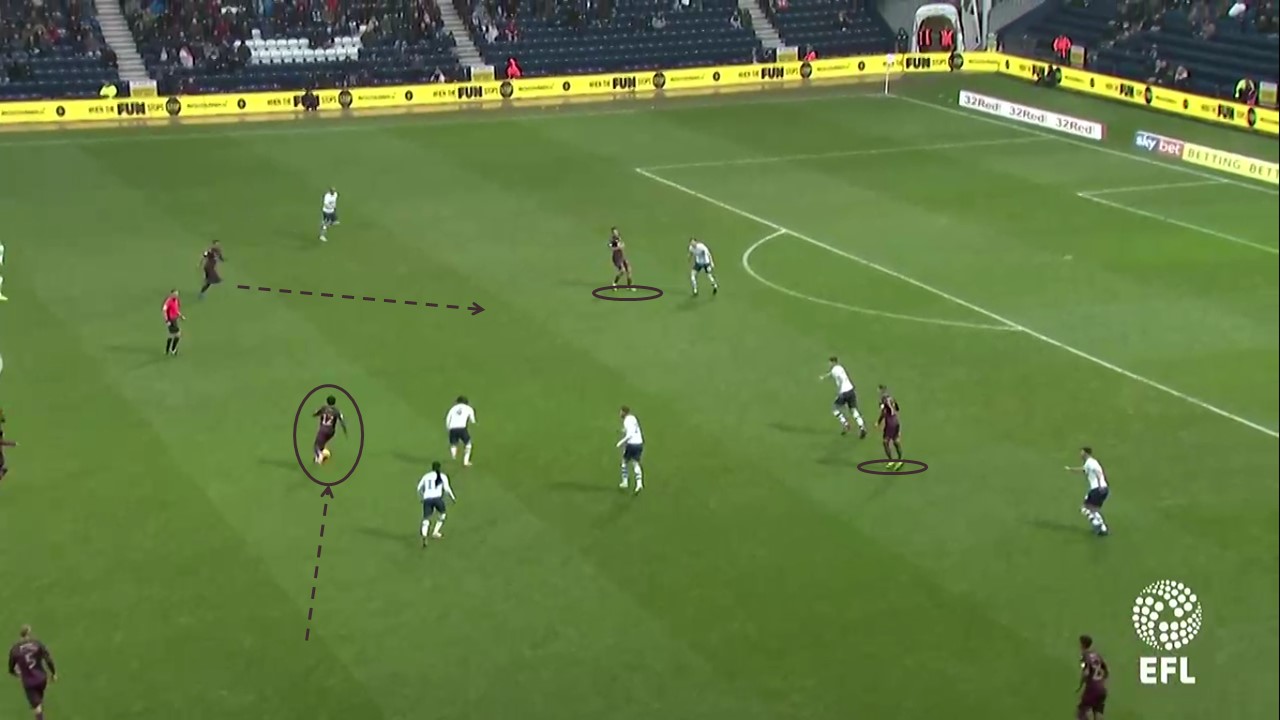 Swansea City’s use of inverted wingers and attempt to focus their attacking play through the central channel saw a lot of action played in congested, central areas. The touch map below shows the average positions of each player based on all ball touches in the second half of the game. 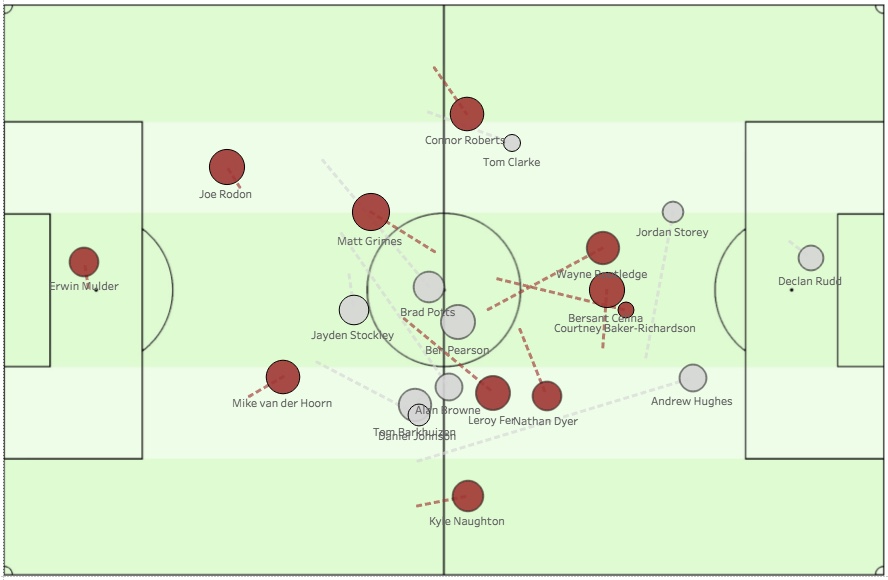 Preston (grey), attacking from right to left, saw six of their players averaging a similar position in or near the centre circle.

The dotted lines show a comparison from their first-half average position. As you can see, a number of Swansea players averaged positions higher up the pitch in the second half, the opposite for the majority of Preston’s players.

The need to switch play

With such a congested area of the pitch through the middle, Swansea City needed to switch the play away from these busy areas to get forward into better attacking positions. 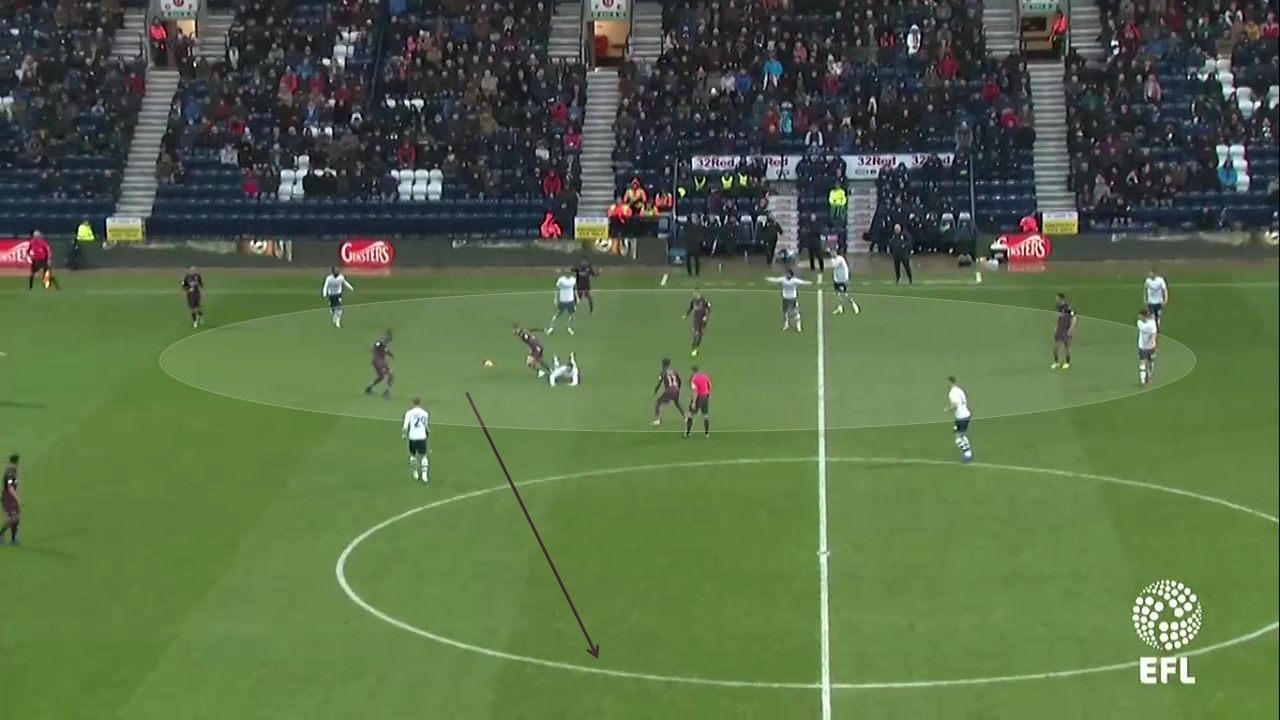 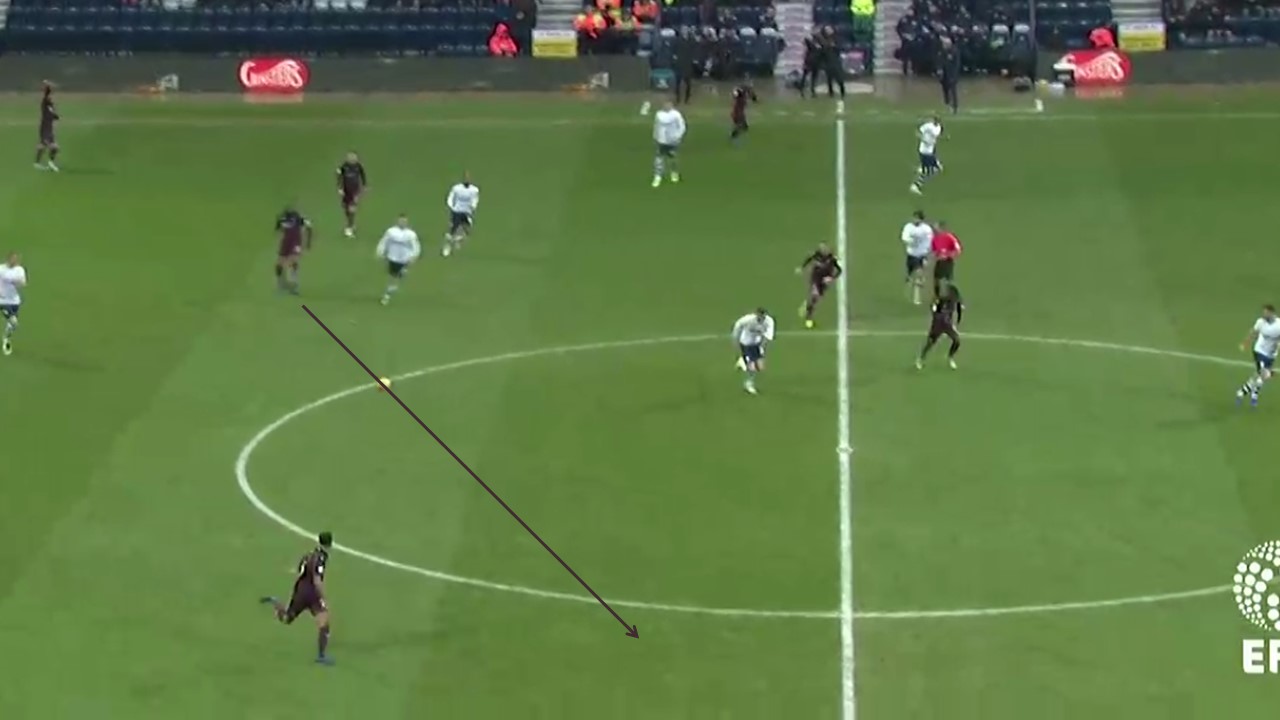 While Swansea City were patient with their build-up play and attacking moves through central areas, Preston’s style was far more direct. In previous games this season, they’ve tended to attack by winning possession in their own half, feeding a central attacker to release a wide man striding forward, or alternatively, simply releasing the wide man directly.

To combat this, Swansea City always looked to get tight on Preston’s lone striker, new signing Jayden Stockley. They tried to prevent him from releasing either of the two wide players racing forward into the channels. 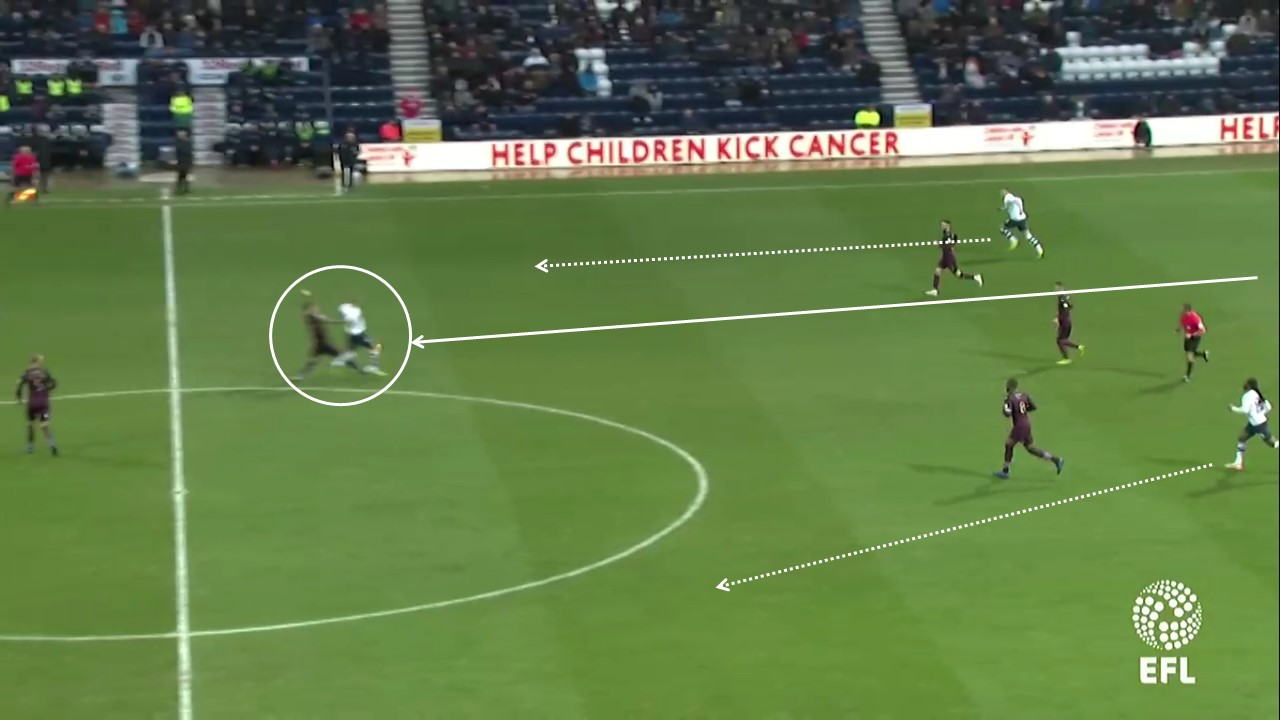 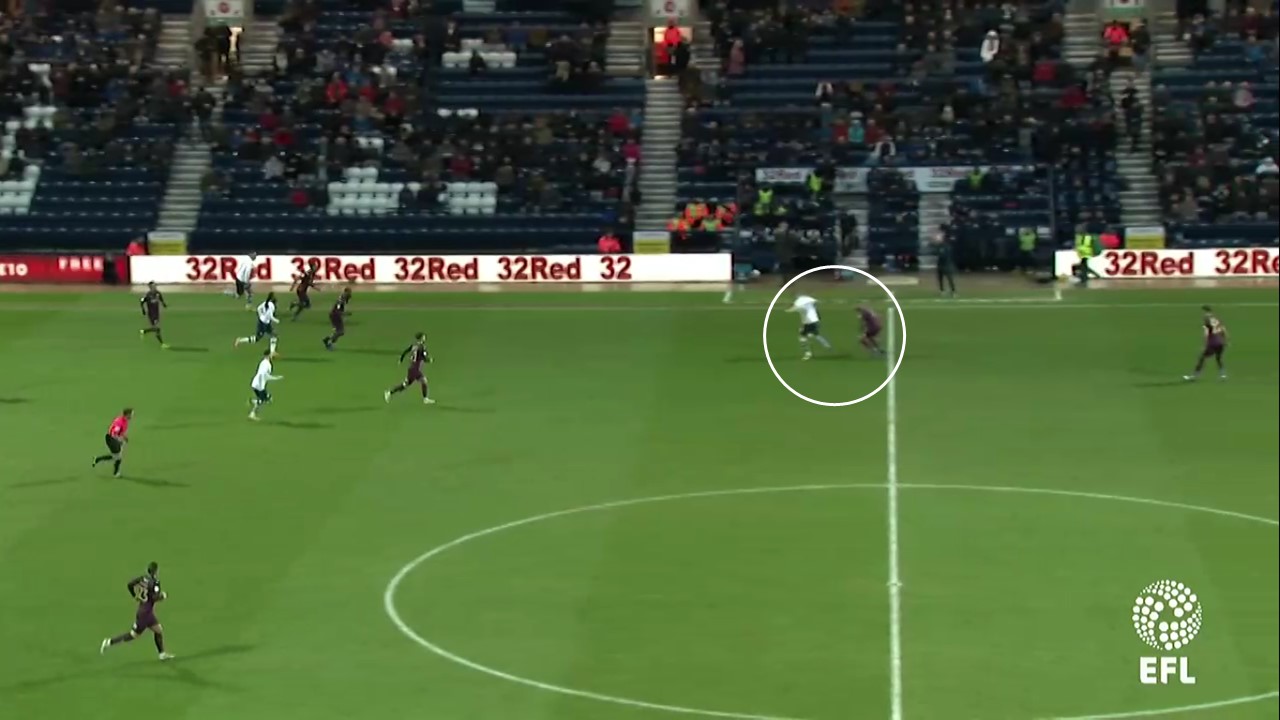 Swansea look to get in behind

In addition to switching play away from congested areas to get forward, Swansea also looked for ways to get in behind midfield and defensive lines. This often proved difficult given Preston’s effective high press and defensive shape further back.

Swansea did, however, find openings here and there, although Preston often heavily outnumbered Swansea in their own box to clear away any danger. 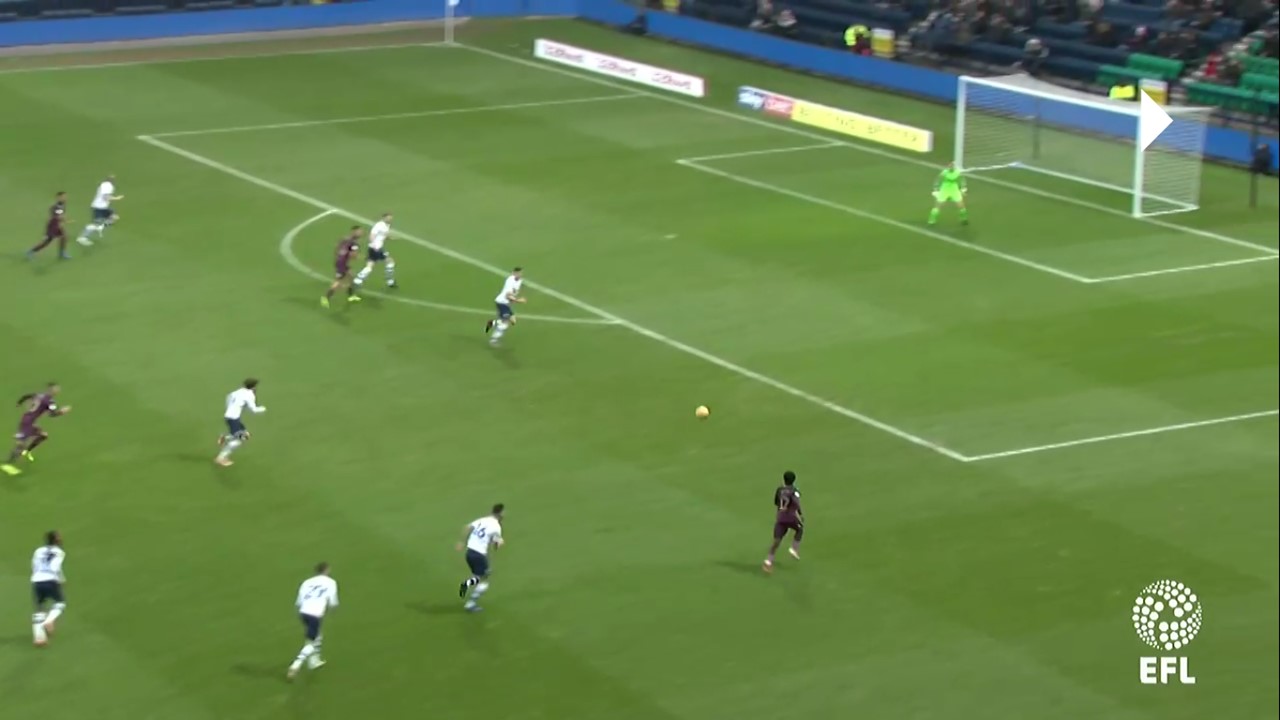 Swansea City found the opening that they had been looking for 10 minutes after the restart. The game opened up more after the break following a first half that saw both sides cancelling each other out.

Less than a minute before Baker-Richardson’s opener, Nathan Dyer – again in a central position – played a ball through for Wayne Routledge to chase in behind. His first touch was a heavy one but he was still able to chase the ball through. The move broke down, however, because Bersant Celina took over, making a touch that led to the offside flag being raised.

It was a poor decision from Swansea’s number 10 as Routledge, despite a heavy first touch, was still able to chase the ball and move in towards goal with Preston’s backline chasing back.

Swansea got it right moments later through in a very similar position, as the image below shows. Dyer again plays a pass through in an effort to cut through Preston’s high defensive line. Again, Celina moves forward alongside striker Baker-Richardson who’s also looking to make a run in behind. Dyer’s through ball is initially blocked by a Preston player but the ball falls kindly into Routledge’s path who can take over.

Routledge does well to keep hold of possession. He holds on to the ball long enough on the edge of the area before picking out Celina’s run through as Preston’s ball-watching players are slow to react to his run.

Celina gets near to the six-yard box, squares a low ball across and it’s the easiest of tap-ins for Baker-Richardson to net his second league goal of the season, and his second in as many games.

Swansea’s lead only lasted 10 minutes however. Preston won a penalty after Connor Roberts was adjudged to have blocked a cross at the by-line with his arm. The decision looked harsh and despite the protests that led to Mike van der Hoorn’s booking, the spot-kick was awarded and the hosts were level.

Other than their opening goal, Swansea City created little else in an effort to restore their lead. Preston, meanwhile, appeared happy enough to sit on a point, making it difficult for the visitors to create any further openings in front of goal.

Preston had one excellent chance to take all three points following an error from Matt Grimes when he took a heavy first touch in the centre of the pitch. As you can see in the image below, after possession is won Preston quickly race forward to take advantage of the situation. Swansea City goalkeeper Erwin Mulder was called into action twice in quick succession, stopping the first effort on goal before keeping out another long-range shot after a half-clearance.

The late sending off, a second booking for substitute Joshua Earl, saw Preston forced to sit deeper in a 4-4-1 defensive shape.

Preston were expected to be a better test for Swansea City away from home. Running a well-organised press that would be difficult to break down, they didn’t fail in that regard. Swansea did find openings here and there but Preston packed their defensive third – particularly their own penalty box – making it difficult for Swansea City to test the goalkeeper.

Despite Swansea’s opener and Preston’s penalty, there was very little else for either side to be worried about as both team’s tactical game plans were on point. Swansea made a like-for-like change with 15 minutes to play, replacing goalscorer Baker-Richardson for former Manchester City forward Wilfried Bony, but the substitution made no impact. The arrival of Montero to add some much-needed pace into their game came too late, and they couldn’t take advantage following Preston’s sending off with nine minutes of normal time to play.