With Arsenal losing their earlier contest against West Ham, Maurizio Sarri and his Chelsea squad had the extra motivation of potentially separating themselves in the top four. While Chelsea have lost only one of their last 12 home matches, they came into this match against Newcastle without a goal in their previous two games. They are in their best form since the beginning of the season after three wins and one draw in their previous five games. Their only defeat in that run came at the hands of Tottenham.

Rafa Benitez’s Newcastle squad are in their worst top-flight form since the 1988/89 campaign. They have also lost nine straight matches heading into this clash against Chelsea. With only 15 goals in 21 matches heading into this contest, scoring had been a real issue for the Magpies. Benitez’s staple is to be extremely disciplined defensively, but has found his defence regularly broken down by the top teams. An issue is his team has not been able to sustain enough attacking pressure, as this tactical analysis will explore. 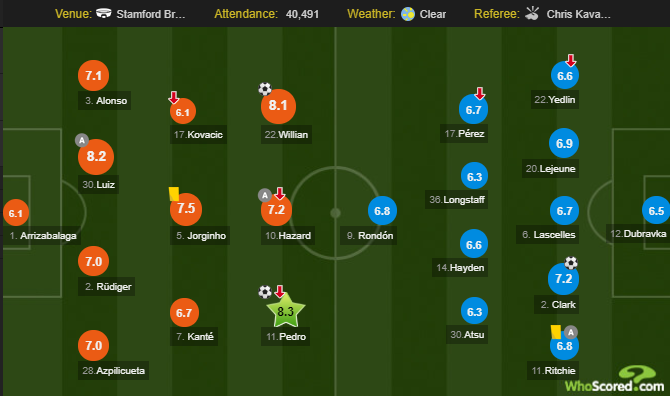 Sarri set up his squad in a 4-3-3 formation with Hazard playing the role of a false nine, which does not suit his skill set to its fullest extent. He does provide their best threat going forward, but this set-up played into the hands of Benitez. Newcastle played in a 5-4-1, with the objective of Deandre Yedlin and Matt Ritchie pushing forward into the attack.

The reason that this makes Newcastle harder to breakdown is that a true target-man provides more options for when the ball gets out wide, which is not Hazard’s strong suite. This limited Chelsea’s attack throughout the game, especially during the first half against Benitez’s low block.

First half: failure to capitalize

As was the theme of the game, Chelsea absolutely dominated possession in the early stages, denying the Magpies any real passing sequences of meaningful quality. Things looked bright for Sarri’s men early on with a terrific direct goal to break down the defence. One would have trouble arguing what was better: the off-ball movement by Pedro and Azpilicueta, or the pass by David Luiz.

One would think that this would break the game open for the Blues. Chelsea however fell into the trap of holding possession but not finding ways to break down Newcastle’s low block. A great deal of this could be attributed to Sarri’s system. Without Hazard running a high line it limits the options going forward, unless there are brilliant individual efforts, such as in the first goal.

As you can see in the position chart for Chelsea, when Hazard plays as a false nine he is essentially in the same part of the pitch as Willian. While this looks like a two-man strike force, it is deceptive as neither striker is actually stretching the defence off the ball with runs in behind.

By the midway point Newcastle started to grow in confidence within the game and created some chances, mainly through their target forward Solomon Rondon. They were successful playing directly and running off of him, catching the Chelsea defence out of position. The Magpies finally broke through before the end of the half from corner. As can be seen below, they exploited poor defensive positioning by Chelsea.

Second half: Willian and Chelsea come to life

The first half ended with Chelsea finding a little bit of success in behind Chelsea’s defence. It was evident that this was Sarri’s plan during the second half, which was defined by the play of Willian, in particular. The Brazilian’s ability to take defenders on provided a constant threat and was helped set up the winner.

The second half also saw Chelsea have much more purpose in their possession, along with better ball movement by Hazard, Jorginho and Kante. This helped open up the Magpies defense and create more scoring chances. Newcastle were not able to create much during this time as their play was extremely predictable. Chelsea’s defence made the proper adjustments of denying Rondon much more hold-up play. The second half summed up much of what we saw throughout the whole game as Chelsea were on a different overall skill level from Newcastle.

Perdro’s off-the-ball movement was absolutely vital to Chelsea’s ability to break down the Newcastle defence. When playing against a low block, attacking players need confidence on and off the ball. This was extremely evident in the first goal noted above, although this is not something normally attributed to Pedro’s game.

Pedro’s game is known more for his ability to break down defences with his passing and dribbling ability. Positioning the Spaniard out on the right flank allows him to find space by tucking inside, especially after his goal when he broke through behind the Magpies’ defence 15 minutes into the game. As you can see below, many of his touches were taken by coming inside and creating scoring opportunities from there.

Living and dying with David Luiz

David Luiz is one the most polarising defenders around. Opinions are strong about what type of player he actually is. He will give you moments of brilliance, and will give you moments the lead to conceding goals. One of his strongest attributes is his distribution, and this was on full display in his assist to Pedro. What is most impressive is he essentially cut out the Newcastle defenders to set up Pedro in behind perfectly.

David Luiz has been highly criticised for his positioning as a centre-back, which has left a lot to be desired throughout his career. In this match we saw the good and bad of Luiz as a defender without the ball. He had moments to show his ability to track runners in behind, even if he was out of position. Coaches live with his positioning because of this, and for his moments in distribution, as we saw with the first goal.

The other side of the coin is his positioning which can leave him exposed. During the latter part of the first half Luiz was caught out of position multiple times and Newcastle almost took advantage. The play above could have been prevented if he had stepped correctly to Solomon Rondon and closed down the space, which is rule number one of a centre-back in that situation.

The Magpies have struggled mightily this season and Saturday was no different against the Blues. Outside a 15-20 minute stretch during the first half, the attack was anaemic. Benitez’s boys should be credited for their ability to exploit set pieces, but the Magpies continuously lack possession and numbers going forward. In this match Newcastle had half the amount of passes as Chelsea, managing just 556 touches to Chelsea’s 893.

Many teams can win without dominating possession – Leicester City proved that – but where the Magies are at a major disadvantage is their lack of numbers going forward. Under Benitez’s setup, if Newcastle are not able to swing the ball to Yedlin or Ritchie as wing-backs, they tend to lack major numbers going forward.

Although the scoreline was 2-1, it is more of a reflection of Chelsea not putting the game away and being in a set-up that did not exploit Newcastle nearly enough. The difference in the game was the talent gap that was clearly seen on both goals for Chelsea. For the Magpies, it is another result in which they were not really a threat going forward.

For Chelsea going forward it is evident they have to find ways to break down defences with more variety. This may require moving away from Hazard as a false nine. As was proven in this game, they certainly have game-changing attackers that can break down defences. It will simply be a matter of Sarri putting them in the best positions going forward.

For Newcastle, they are going to have to find a way to be more dangerous in attack. Benitez’s low block is still frustrating for teams to break down, but they are just too predictable in the attacking third. If they can find a way to create more chances, they may find a way to turn their campaign around.