After an intensive game that ended up with a draw with Liverpool (1-1), The Arsenal took one point from its Europa League game against Sporting Lisbon too. The Londoners had their opportunities but somehow didn’t take advantage of them. Danny Welbeck’s horrible ankle injury in the 30th minute surely affected the players as they immediately realised it’s a serious one and that’s going to keep him out of the game for a long time.

The Arsenal completely dominated over Sporting and was the more creative team but with only two shots on target out of 14 attempts they didn’t find the goal and that resulted in a goalless draw (0-0). 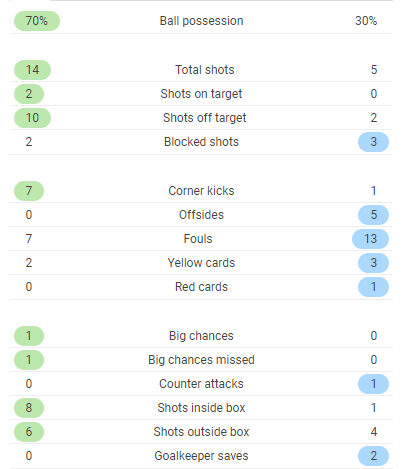 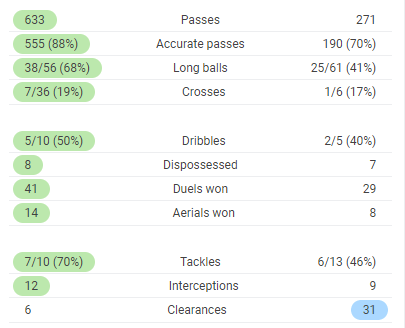 The Arsenal totally dominated, and it could be seen even by the game’s statistics. The team completed 555 accurate passes, compared to only 190 by Sporting. They had a better accuracy in almost every indicator and won a whole 41 duels – 12 more than their opponents. As I mentioned the team didn’t have the perfect finish, but it outscored the Portuguese with 14 total shots, although only two of them were on target. Both teams couldn’t provide a lot of accurate crosses which resulted in missing their opportunities.

Unai Emery proved that he is unpredictable when it comes to starting XI. It all started with the goalkeeper as Petr Cech returned from injury and started against Sporting. In front of him, Unai gave a chance to Carl Jenkinson on the left-back, who played his first game for Arsenal this term. The guy actually put some solid performance and proved that he could be an option in moments of crisis on the left. He won 2/3 of his duels, made one clearance, two interceptions, made one key pass and had 92% passing accuracy for 60 minutes on the pitch.

Next to him in the four-man defensive line were Rob Holding, Sokratis and Stephan Lichtsteiner. The only player with more playing time lately was Holding. The Englishman proved that he is the right choice for the central defensive duo as he won 5/6 of his duels, made one clearance, one interception and blocked one shot. His long ball accuracy was strong as usual as he sent 3/3 accurate ones to finish the game with 93% passing accuracy. Lichtsteiner was subbed in favour of Ainsley Maitland-Niles who played in his first game after picking up an injury in the first week in Premier League against Manchester City. So Unai Emery has a little less to worry about as with Kolasinac and Maitland-Niles back and Jenkinson he has more options in terms of the defensive four.

What was different this time is that The Gunners played with very highly positioned defensive line. The plan to press more and control the game while keeping the possession seemed to be working. The duo Sokratis – Holding handled the situation with perfectly timed interventions and didn’t allow the strikers to sneak behind their back. They didn’t dive in thoughtless actions and seemed calmer than usual. 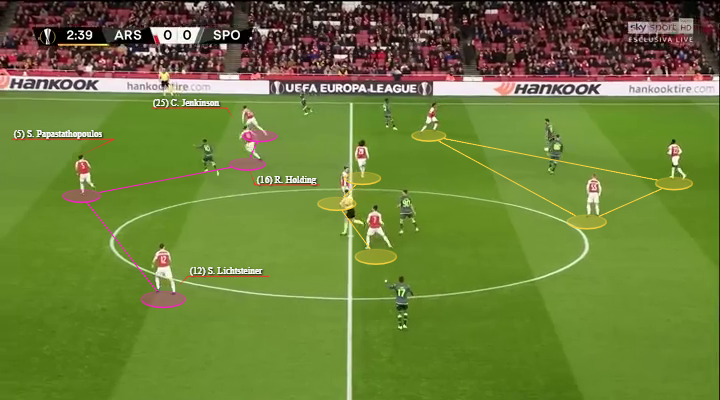 An example of the perfectly structured team. The players tried to fill the gap between the lined and had most of their opponents covered.

Another player that gets the likes of the manager is Emile Smith-Rowe. The youngster is starting to get more playing time and proves that there is a huge potential in him, although he didn’t manage to do anything spectacular against the Portuguese team. His inexperience often gets him in trouble when it comes to duels as he still doesn’t have the needed confidence to dive into them without hesitation.

As I mentioned Danny Welbeck, who was the starter up front, picked up a terrifying ankle injury and had to be replaced in the 30th minute. Aubameyang came in as the result was still 0:0 and the team needed explosiveness in the final third. He managed to produce 3 shots but all of them were off target.

Iwobi’s dancing with the ball

The one player that keeps impressing this season is Alex Iwobi. I’ve said it before and I am going to repeat it. The Nigerian international definitely deserves a credit. His on and off the ball movements are great to watch and the confidence he puts in it is even more captivating. His dribbling skills are highly priced, and he is giving a hard time to every player that dives in a defensive duel against him. Iwobi has a huge impact to the team’s performance, especially when positioned on the left wing, as it was against Sporting. He contributed with a few great crosses but his overall actions during a build-up are the ones that make the difference. 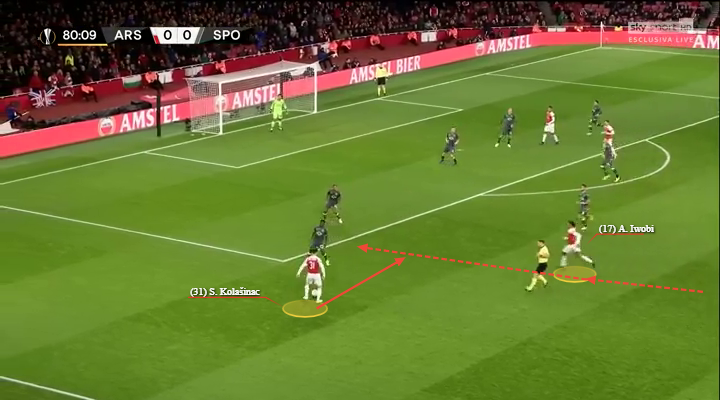 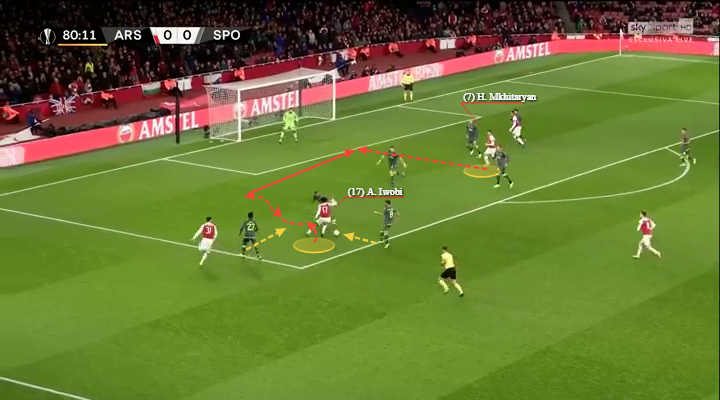 In here he moved off the ball, so he could receive the ball from Kolasinac. Then despite the pressing duels he dribbled past his markers and made a perfectly measured cross to Mkhitaryan who eventually missed. Iwobi is unstoppable with the ball in his feet, but his positioning plays a huge part of it all too.

He was part of several similar situations where he was able to show off his playmaking skills and his importance for the team.

The style Unai Emery wanted to implement with his arrival – to keep the possession and to press high seem to be already there. The players made it hard for Sporting’s players to play out from the back will very well put and measured actions. There were no unnecessary moves and the whole team seemed more mature and confident. Each player had his contribution to the whole team’s performance and even though it all ended with a draw, this was another sign that Emery has got the control over it and is moving in the right direction.