With their second unexpected defeat in a row and being knocked out of the FA Cup quarter-finals, Manchester United‘s comeback has begun creeping towards being a setback. The fatigued United side, after doing a fantastic job over the past three months, have begun to be exploited not only by their big-five rivals but also by the underdogs.
This tactical analysis explains what the weak segments were in Ole Gunnar Solskjaer’s game plan against Wolves, and how Nuno Espirito Santo’s men drew on the tactical shortcomings in Manchester United‘s tactical formation to crush their illustrious opponnents.

Manchester United started with their usual 4-3-1-2 formation, but their formation often switched to a loose 4-2-4 shape. Meanwhile, Wolves began with a more conservative 3-5-2 formation. As the home team were dominated in possession, their overall formation throughout the match became a defensive 5-3-2. 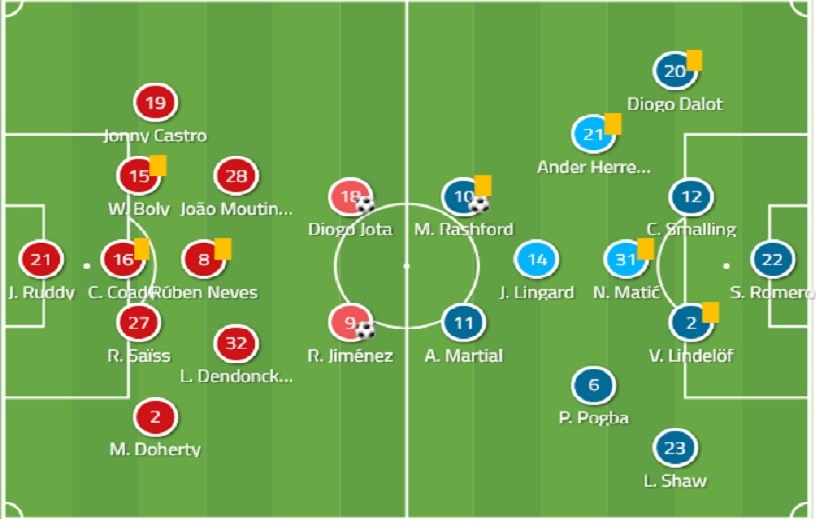 Manchester United played a narrow game when in possession, as shown in the image below. They restricted their passing play, especially in the final third, to central lanes throughout the game. However, Wolves’ deep block defence and intense press in the defensive third posed problems for United’s centrally-oriented attacking play.
As a result, the visitors’ route to goal was a sluggish and laborious one. Disappointingly, Solskjaer’s men didn’t even change this inefficient attacking style till the end, and failed to show any capacity to successfully execute wide plays. Even when Manchester United attempted to go wide to play in crosses, they were blocked by Wolves’ full-backs.
Wolves outnumbered United on the flank, thus eliminating any chance for the Red Devils to transition their passing play from the central lanes to the flanks. Despite United dominating possession, they couldn’t create chances to play crosses except for a very few occasions which were negated by Wolves’ defenders anyway.

Being centrally oriented when reaching the final third, Manchester United left big spaces on the flanks. Thus they became vulnerable to be hit on transitions via the open flanks.
In their Premier League fixture against Arsenal, the Red Devils were positioned too deep to ensure the protection of their flanks. Here at Molineux too they made the same blunder and were cut open by their opponents in the same way.
Not only was United’s shape spacious and vulnerable in attacking and transitional phases, but it was also the same during defensive periods. The spacious structure of United was the direct outcome of their loose tactical formation. Manchester United started the game with their usual 4-3-3 formation, but ended up in a looser and more attacking 4-2-4 formation.
With two midfielders to protect the back line and four advanced players, United ignored a large gap beyond their midfield. Similarly, with the full-backs dropping deep, the away team ignored the open flanks as well.
This loose formation caused them to lose possession in the build-up phases and to keep conceding the possession for longer durations in midfield. Wolves were thus able to hold their play longer in the middle and had the attacking option of more than just playing long balls. Facing this, Manchester United now also had to double their defensive attention, which they couldn’t.

The second half: United got hit on the flanks at last

Wolves have been playing long balls to get past United’s last line of defence and escape the midfield press. Nonetheless, after leaving their flanks all open for their opponents, United were eventually hit out wide. Wolves already started exploiting the widths in the latter stages of the first half. Then in the second half, Wolves were ready with their plan to attack United on the flanks. The Red Devils conceded the first goal by being attacked from out wide by a passing sequence that led up to Jimenez’s goal.
The second goal by Diogo Jota was scored from a counter when Manchester United only had two defenders back against four Wolves attackers. A third, Luke Shaw, had already gone to ground after losing out in a physical duel.
Manchester United did show a little improvement in the second half though. Sergio Romero made some outstanding saves. They were also more assured in their positioning between the lines to cover up their spacious formation. However, they weren’t able to display enough urgency to produce quality attacks and crosses. Wolves also intensified their press in their defensive third after scoring the second goal.

Manchester United, as expressed by Solskjaer, put in their poorest performance so far since the new boss joined. It’s already become a concern at Emirates Stadium that the Norwegian’s tactics would soon be figured out. Except for Rashford’s consolation goal in stoppage time, and of course Romero’s wonder saves, United couldn’t cause hiccups for the relentless Wolves.