Manchester United came into this game with a continuing great run of form. Having taken 26 points out of 30 in the Premier League since Ole Gunnar Solskjaer took over, they have closed the gap on fourth place to one point. The Red Devils have had a punishing injury report the past week, with 10 first-team players missing, but a game against Crystal Palace typically bodes well for United. Manchester United last lost in the league to Crystal Palace in May 1991, but Crystal Palace acquitted themselves well in the reverse fixture when they got the type of goalless draw that became indicative of Mourinho’s form against lower table teams.

Crystal Palace came into this game with the second fewest goals (nine) at home in the Premier League this season, only behind Huddersfield Town (six). However, Crystal Palace haven’t lost a game since 19 January against Liverpool (who are also the last team to beat Manchester United in the league), taking eight points out of 12. This form has taken them clear of the relegation zone.

With so many out injured, Manchester United were happy to secure all three points on their visit to south London. Even though they didn’t play particularly well, Manchester United won 3-1 against a Crystal Palace side that has played better of late. In this tactical analysis, we’ll look at United’s changes to deal with the injuries and how they were able to secure their record eighth straight away victory. 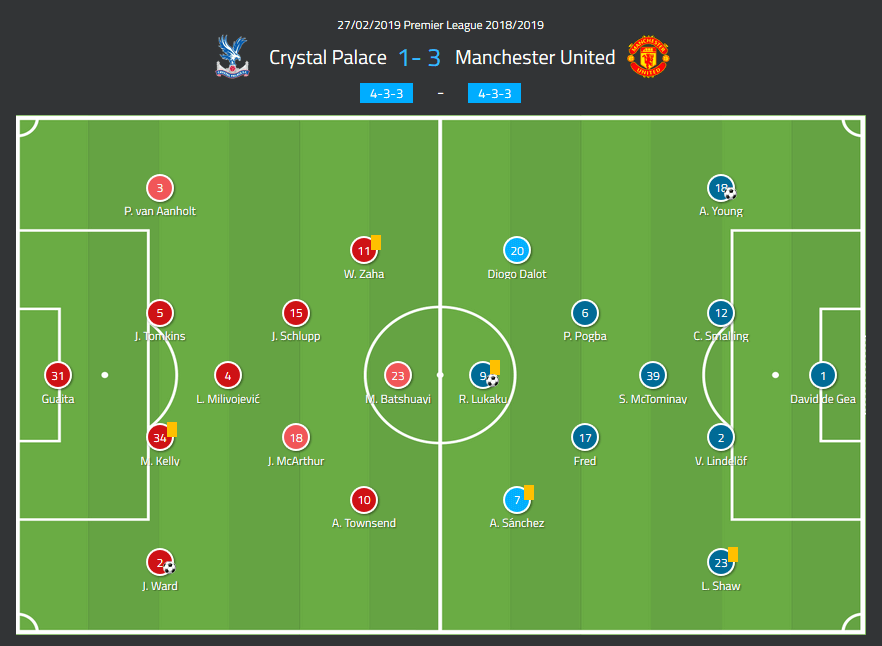 Solskjaer made three changes from the side that held Liverpool to a 0-0 draw the previous weekend at Old Trafford. Switching from the 4-4-2 diamond that the Norwegian has used in all games against ‘big six’ opponents back to a 4-3-3, he was without his first-choice front three due to injuries.

With Juan Mata injured against Liverpool, and Marcus Rashford only fit enough for the bench, Alexis Sanchez got a start on the left side of the front three as Diogo Dalot started on the right. In the midfield three, Fred came in for Ander Herrera who was injured on Sunday against Liverpool. The accumulation of injuries meant that four members on the bench were age 23 or under.

Roy Hodgson, who is now the oldest manager in league history, only made one change from the side that won away 4-1 to Leicester City. Mamadou Sakho left that match injured, which meant that former Liverpool player Martin Kelly came into the side at centre-back. Hodgson also decided to stick with the 4-3-3 that has led to the upturn in form lately, largely helped by the acquisition of Michy Batshuayi on loan from Chelsea.

With so many injuries, Manchester United were forced to make several changes in the game against Crystal Palace. One of the biggest changes was Diogo Dalot coming into the side, but on the right-wing instead of at full-back where he has played all his minutes since arriving in England. In the Porto youth team he played on the wing, but it isn’t something he’s done at senior level.

Ashley Young started at right-back, but he didn’t provide much going forward. He stayed back during attacks, often almost playing as a third centre-back. The reason for this was the pace and danger that Crystal Palace offer on the left side of their attack.

With Wilfried Zaha on the left wing, Jeffrey Schlupp on the left side of the midfield three, and Patrick van Aanholt at left-back, this is the Eagles’ main attacking focus. The pace of these three players has caused problems all season in the league, and it has become more dangerous now that they have a more consistent finisher in the middle in Michy Batshuayi.

With Young staying deep, it was up to Dalot to provide all the width on the right side. He would stay near the touchline, which meant he struggled to create combination play with the other forwards. However, this allowed him to stay in a position to help Young deal with the danger of Crystal Palace’s attack.

As we can see in the images below, Young steps out to close down Zaha as he receives the ball. Van Aanholt charges forward to try and get into the space that Young has vacated, but Dalot is vigilant to the move and tracks the Dutchman’s run, getting ahead of him to intercept the clearance and put it out for a throw-in. His defensive awareness ensured that the Eagles were never able to overload Young. 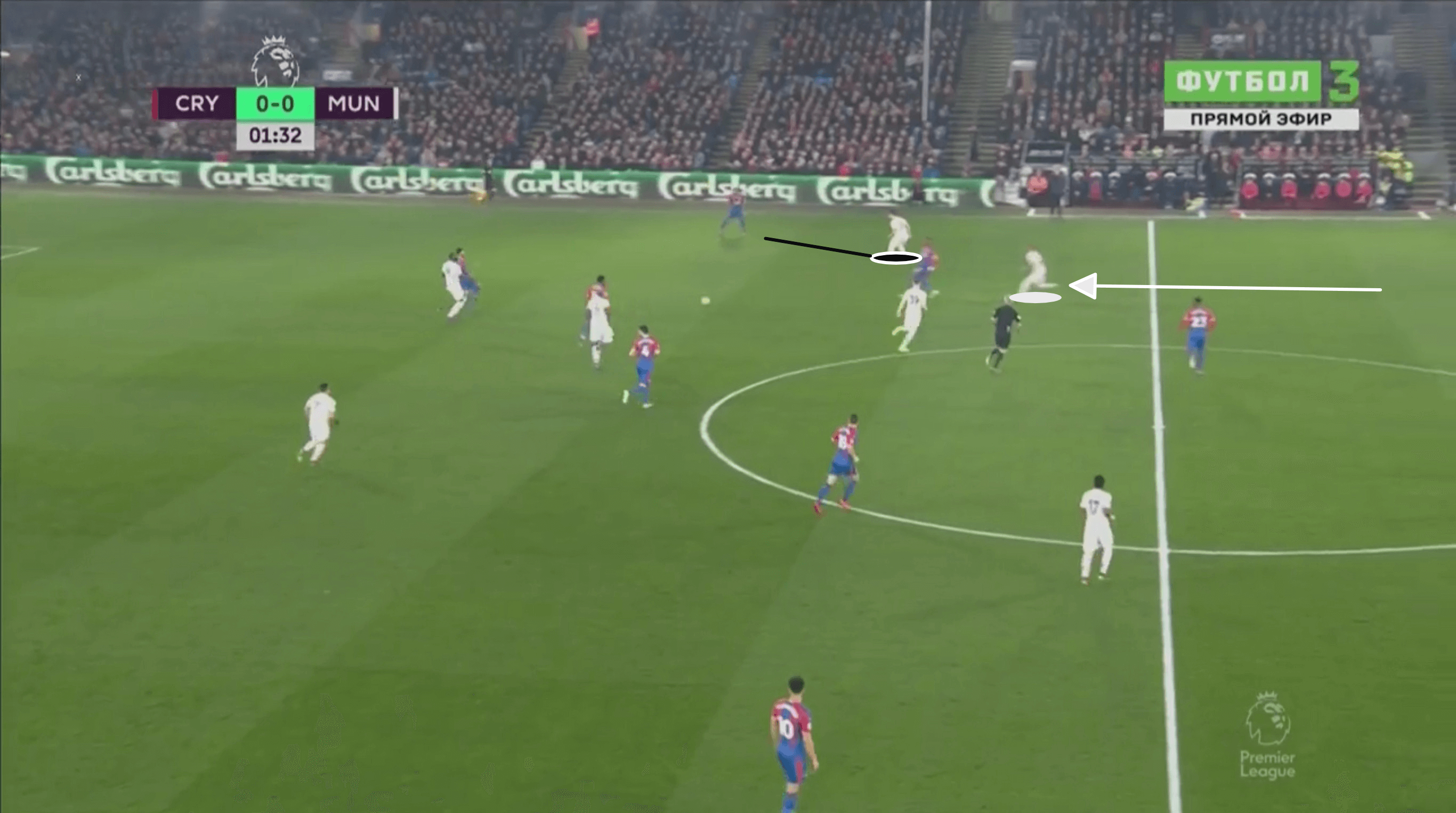 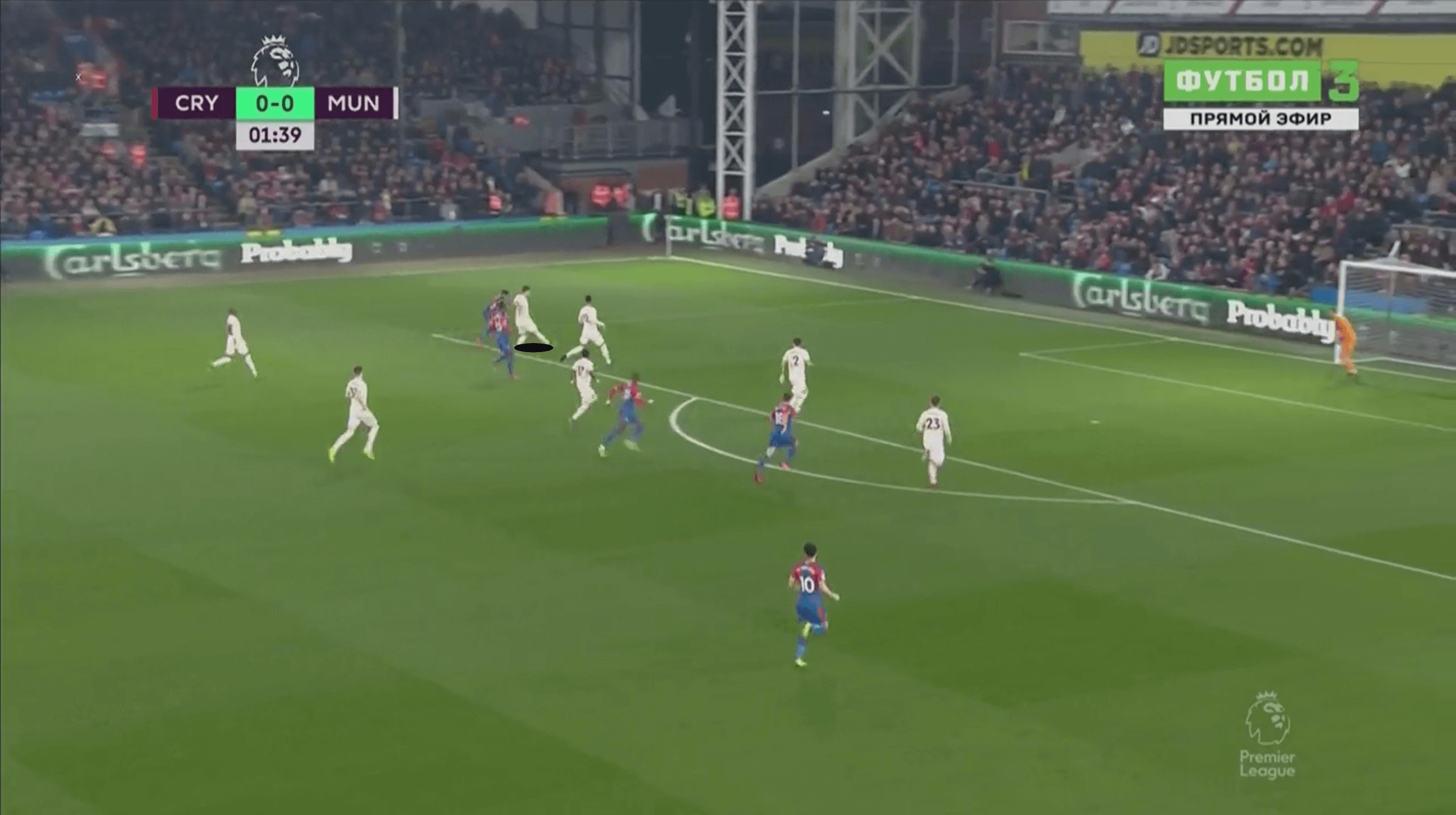 The left side of United’s attack

On the left side of the Red Devils attack, Alexis Sanchez got the start. His main attacking movement was to drift in from the left, looking to combine with Lukaku. As we can see from the graphic, Dalot’s touches were all within five metres of the touchline, whereas Sanchez would come centrally and try to operate between Palace’s lines. He had very little success with this play, but his drifting into central locations meant that the wing was vacated for Shaw to get forward.

As we can see in the image below, Luke Shaw is able to drive forward into the space vacated by Alexis. He’s able to dribble past a couple defenders, getting into the box before pulling the ball back for Lukaku. The Belgian is in space, and is able to curl the ball around the defenders to place it into the far corner past a partially unsighted goalkeeper in Vicente Guaita.

Manchester United’s midfield also worked to their structure. With Dalot staying so wide on the right, Paul Pogba had room to burst into as he played on the right side of the midfield trio. With Van Aanholt staying wide to mark Dalot, there were large gaps in the channel that Pogba was able to exploit.

Typically, in Manchester United’s midfield, Nemanja Matic operates as the defensive midfielder to shield the back four. He stays deep during the attack, waiting to break up opposition counter-attacks while also providing an outlet to receive the ball and recycle possession. Ander Herrera operates in a more box-to-box role, staying deep and providing the mobility next to a more static Matic. As United transitions into the third phase of possession, in the final third, Herrera will move higher up the pitch and patrol the right half-space, looking to combine with the central striker and the right winger. Paul Pogba will play a more advanced role on the left side, with most of his contribution coming on the attack. Defensively, he helps press higher up the pitch and apply pressure on the opposing team’s centre-backs and also try to prevent their passes into the midfield.

With the injuries, Scott McTominay played in Matic’s role as the deepest midfielder. He was responsible for shielding the Red Devils back line. He performed this role well, providing more mobility than the Serbian typically contributes, but his passing isn’t quite as refined. On the left side of the midfield trio, Fred stayed deeper to help McTominay break up counter attacks. He filled in for the injured Ander Herrera, but he swapped sides with Paul Pogba. This worked with United’s structure, as it didn’t congest the space that Alexis was operating in. The midfield worked well together; not quite as well as the trio of Matic, Herrera and Pogba but it proved to be functional on both an attacking and defensive basis.

Crystal Palace rarely fare well against the red half of Manchester, and this match continued that trend. They did well creating chances, but still have problems converting them while United had no such issues. Crystal Palace had an xG of 1.67, compared to Manchester United’s 1.51. This shows how United’s clinical finishing was the difference over Palace.

Additionally, the Red Devils’ structure meant they minimised Palace’s strengths and made sure the chances dropped to their most inconsistent finishers. A victory from Manchester United even when they don’t play well is another attribute we’d associate with the glory days of Sir Alex Ferguson.