Ole Gunnar Solskjaer returns to Manchester United but this time as the caretaker manager. Solskjaer has been given the task to create some optimism at the club after their disastrous start to the season. In this tactical analysis I’ll look back on his tactics with Molde to see what his United might look like for the remainder of the season.

Solskjaer was appointed at Molde in 2011 to start his managerial career. He previously spent a few years as United’s reserve team coach where he will have monitored the development of Paul Pogba and Jesse Lingard. Solskjaer performed superbly at Molde, leading them to their first ever league title in his first season and then defending the title in 2012. In his third campaign Molde started badly and eventually only finished sixth. In January 2014, Solskjaer was appointed at Cardiff with the club languishing at the bottom of the table. Solskjaer didn’t manage to keep them up and was sacked in September after a bad start in the Championship. He then returned to Molde in 2016 and led them to fifth place before finishing second in 2017 and 2018 after the serial champions Rosenborg.

Solskjaer mainly uses a very attacking and interesting 4-2-3-1 formation. Sometimes the team also sets up in a 4-1-4-1 defensively. The keys to their success under Solskjaer has been the pressing, counter-pressing and fluid attacking play.

Solskjaer wants his team to press high up the pitch and disturb the opponent early. This doesn’t change despite going up against tough opposition. The top of the table clash with Rosenborg is a good example where Molde really went after their rivals and secured a 1-0 win. We could see the same mentality in the away game with Zenit Saint Petersburg. Zenit, as expected, won the play-off 4-3 on aggregate but Molde really shouldn’t have a chance against such a club. Solskjaer’s attacking mentality gave them the belief they could and Zenit were clearly disturbed.

Solskjaer’s team presses in a 4-2-3-1 or a 4-4-2. In the image below we see their starting positions when pressing against Rosenborg. Note the area where they start the press with the striker. It’s right there next to the opponent’s penalty area. 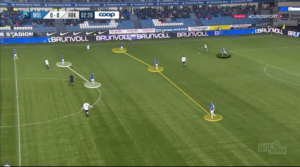 The wingers often angle their pressing to force the full-back inwards while the striker occupies the ball-near center-back. The aim is to force a risky pass centrally. We can see this pressing trap below as Molde try to steer the pass into the left-sided Zenit center-back with the right-sided winger ready to pounce. 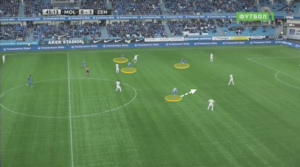 The below image show Solskjaer’s team pressing high in a 4-4-2 shape. The pressing is a mix of man-orientation and positional pressing with the two central midfielders shuffling across to cover space rather than marking opponents. 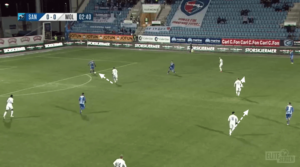 When the ball enters the wide areas we can see how well-organized Solskjaer’s team is defensively. The below image shows the left-back (yellow) engaging in a pressing action. The left-sided winger and the ball-near central midfielder (both white) as well as the ball-near center-back provide cover and support. 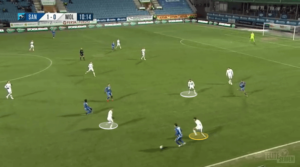 The image below is almost a mirror to the one above but on the other side. The full-back is pressing while the ball-near winger, central midfielder and center-back provide cover and support around the ball. 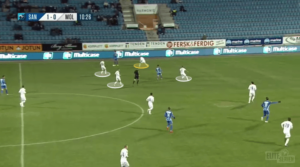 When defending deeper Solskjaer’s team moves into a 4-4-1-1 shape as below or in certain games a 4-1-4-1. The team shape is compact and looks to force the opponent wide where they can press as shown in the two images above. This is therefore a striking difference to the target when pressing high where Solskjaer steers the play inwards where it’s far more advantageous to steal the ball. 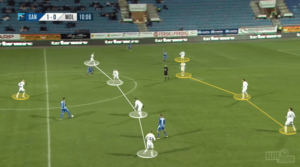 Solskjaer’s defensive style of play is very proactive and would be a stark contrast to Mourinho’s setup. Solskjaer wants to have the ball and he wants his team to win it back quickly. Now let’s look at what they do with the ball when they have it.

Dominate with the ball

Solskjaer’s Molde was a very attacking team and were comfortable top scorers in the Norwegian Eliteserien. He cites Pep Guardiola as a role model and you can see some of Pep’s approach in Solskjaer’s attacking play. First of all he looks to build attacks from the back and he always creates maximum width in order to create space centrally. He then has at least four players always moving around in the center looking for space. Finally the striker has the responsibility to always create depth and threaten with runs in-behind the defense.

The image below sees Molde looking to build from the back. The two center-backs (yellow) split wide with one of the central midfielders (white) dropping in to help progress the attack. 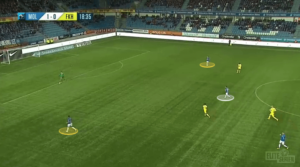 One movement we often saw from Solskjaer’s midfielders was the one highlighted below. The central midfielders drop out of the center and into the half-spaces. This is possible due to the high positioning of the full-backs (yellow). In the below scene both Molde central midfielders (white) have moved into wider positions. 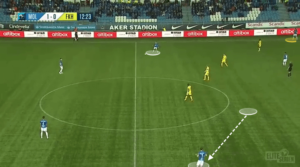 This positioning creates a lot of problems for the opposition. First of all it’s very hard to press a central midfielder in the half-space. Often the opponent’s winger will be pressing and then it’s easy to bypass the press with a pass down the line to the full-back. Should the full-back be marked by the opponent’s full-back then it’s possible to play the ball into depth to an on-rushing winger. Solskjaer wants his players to create passing triangles or diamonds as seen below. The central midfielder is at its base with the full-back on the touchline and the winger and number ten as passing options centrally. 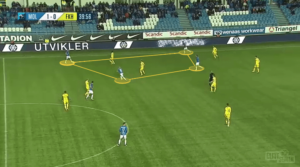 When the midfielder moves wide the shape often looks like highlighted below. The two center-backs remain deep with one central midfield wide (yellow), one in the center, the full-backs (pink) wide and the three attacking midfielders (white) coming into the half-spaces and the center. It creates a lot of space centrally and good passing options for the player in possession. 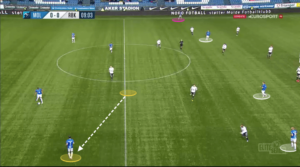 The full-backs are critical to Solskjaer’s attacking play as they provide maximum width and all times. We can see this below. The striker also has an important role by stretching the opponent’s defense which creates more space for the five midfielders to get on the ball in central areas. 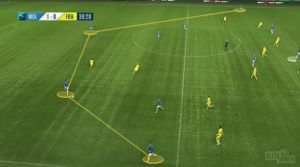 When the ball enters the wide areas far up the pitch, Solskjaer looks for crosses or runs like the one highlighted below. In that scene the winger makes a move towards the channel behind the full-back forced to press Molde’s left-back. Also note the positioning of the three attacking midfielders (yellow) in central positions. 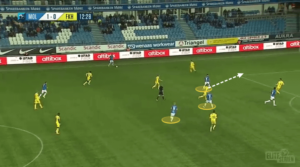 Solskjaer’s attacking play is very combination-focused and he wants quick short-passing from his players. The concept of the third man is also widely used by Solskjaer’s teams. The image below shows a perfect example of this. One of the central midfielders play a pass into the striker who instantly lays it off to the right-sided winger who makes a run in-behind and finds space for a shot. 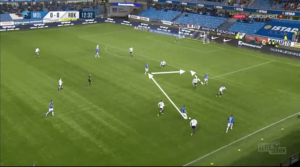 The Guardiola influence is clear to see in Solskjaer’s emphasis on width, central passing option, the use of the third man-concept and the short-passing combinations. It creates an attractive style of play which is also very dangerous.

Solskjaer also wants his players to counter-press aggressively upon loss of possession. They look to shrink the space around the ball and put the ball-carrier under intense pressure to force a mistake. The below image shows Molde successfully counter-pressing aggressively with four players just after the ball was lost. 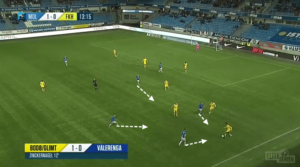 The image below is another example with the ball being lost in the wide area and the two closest players (yellow) immediately putting pressure on the ball to win it back. The ball-far winger is making a movement inwards to mark the Zenit midfielder while a central midfielder (white) provides cover for the pressers. 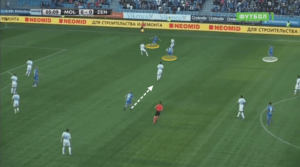 How does he fit Manchester United’s squad?

So how does Ole Gunnar Solskjaer’s style of play fit with the United squad? Very well in fact. David De Gea will obviously remain first-choice goalkeeper also under the caretaker. Full-backs like Diogo Dalot, Antonio Valencia, Luke Shaw and Ashley Young are all well-suited to this type of attacking positions. Dalot in particular looks tailor-made for this role. The emphasis on building from the back might in theory exclude all United’s center-backs as neither is known for their quality on the ball. The aggressive defending will suit Eric Bailly well though, and I think the positional defending of the team when compact is perfect for Victor Lindelöf.

In midfield it all depends on if Solskjaer will use a double-pivot with a number ten or a holder with two more advanced midfielders. My bet would be on a fluid 4-2-3-1. Ander Herrera could be key given his recent form and his pressing abilities and would likely be joined by Paul Pogba. Pogba would play in a more attacking role than under Mourinho and has no excuses but to thrive in Solskjaer’s style of play. Jesse Lingard will also be key with his superb combination play and is the frontrunner to start as the number ten while also being capable to drop back to create a midfield three.

Juan Mata’s intelligence in possession is a good option off the right wing with Anthony Martial sure to start on the left. The emphasis on a quick striker running the channels could mean Marcus Rashford might be preferred to Romelu Lukaku as the striker, but if anyone can revive a striker then it’s Solskjaer.

A possible XI could then look something like this:
De Gea
Dalot-Bailly-Lindelöf-Shaw
Herrera-Pogba
Mata-Lingard-Martial
Rashford

Ole Gunnar Solskjaer is evidently a very good tactician and capable of implementing an attractive and dominant style of play. His main job at Old Trafford isn’t to build a title-challenging team for next season though. His job is to create a buzz around the club, lift the players to make them enjoy playing for United and bring back optimism to the Manchester United fans. If he does that he will have succeeded regardless of the results. But if he proves to be a leader capable of managing this club and its players, his attractive style of play can make United an exciting team to follow over the second half of the season.