The North London Derby is knocking on the door for a third time this term. Arsenal defeated Spurs in a memorable 4-2 goal show at the Emirates in early December. Then, soon enough, Tottenham knocked their rivals out of the EFL Cup with a 2:0 away win. That evened things out but there is yet a lot to be fighting for. Both teams are four points apart in the Premier League table with Spurs taking the third place right in front of their city rivals.

Tottenham have a lot to prove after their two consecutive defeats by Burnley and Chelsea. On the other side, Arsenal are back on winning ways but as their inconsistent performance has proven, this might not be a thing to rely on.

Applying high press on Spurs’ and trying to block their build-up might be the best case scenario for Arsenal. As their rivals are going to overload their half with players, they need to make sure the ball stays circulating between the backline and the midfield line. When it comes to the Arsenal, a simple lofted-pass could still make their life miserable and turn the clean sheet into oblivion once again. Some of the team’s defensive issues have been slightly cleared out but the Gunners still have the worst record among the top six with 38 conceded goals.

Applying a high press and forcing Tottenham’s players into doing individual mistakes might be the way to win the NLD for Arsenal. Blocking the passing lanes in the early stages of the attack would force Spurs to seek unusual ways to deliver the ball further which could result into losing the possession midway with the likes of Lucas Torreira marking his opponents precisely. The Gunners should make sure they’ve covered Winks and Ericksen tightly in order to stop Tottenham’s build-up play.

But this way, they would take the risk of leaving Sissoko as the only option for a forward pass. He is yet to achieve Dembele’s stability in the central areas but if left uncovered, he would be able to combine with either the wing-backs or the full-backs depending on the formation.

This might cause problems for Arsenal’s defensive line as Heung Min-Son usually sits behind it, with his back towards the goal. He would wait to receive the ball and exploit the channels between the defenders, leaving no chance for them to react. 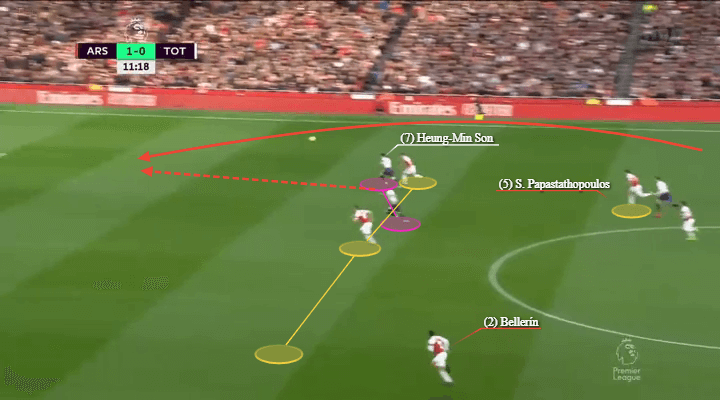 That’s what happened in one of their previous meetings when Arsenal got caught on a counter-attack (see the picture above). Son was waiting right on the defenders’ back so he could make a speedy run to the box after receiving the ball. Sokratis was missing of the three-man defensive line and that left more spaces for Tottenham to operate in.

Son is not the only threat for the Arsenal’s back-line. Despite Kolasinac’s attacking ventures being very successful, they would leave a gap behind on a few occasions. The Bosnian often struggles to get back to his defensive responsibilities. That, combined with his inconsistent performance in 1-v-1 situations, might leave too much space for Harry Kane too. Especially, if Unai Emery chooses to go out with a three-man defence. Spurs won’t hesitate to use the spaces between the lines trying to build-up through the middle and then spread out to the wings in the final third. Or vice-versa – use the full-backs for making runs on the wings, which would give the wide attackers to exploit the half-spaces.

Going out with a three-man defence would not be ideal for Arsenal as Spurs might use their 4-2-3-1 and the aforementioned tactics to overload the final third. This could cause problems, especially if the wing-backs do not drop deep enough to support the defenders.

Having Spurs’ full-backs/wing-backs deep on the flanks could be useful as well as dangerous. Their extremely low crossing accuracy might give Arsenal the chance to intercept/recover the ball and form counter-attacks.

This is where Ozil and Mkhitaryan might come across. Their intelligence off-the-ball might be crucial during transitions, especially when positioned in the half-spaces. This would offer two options:

The Gunners should find a balance between pressing high and staying deep when needed. As I mentioned they are often exposed by simple lofted balls over the top. Not putting enough pressure on the ball carrier and having a highly positioned defensive line is short notice for a disaster. 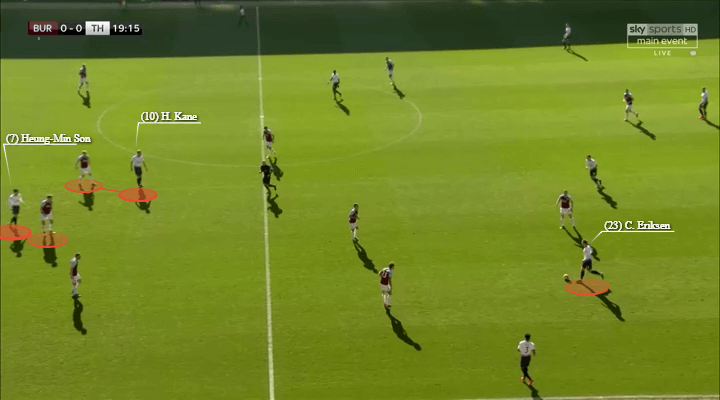 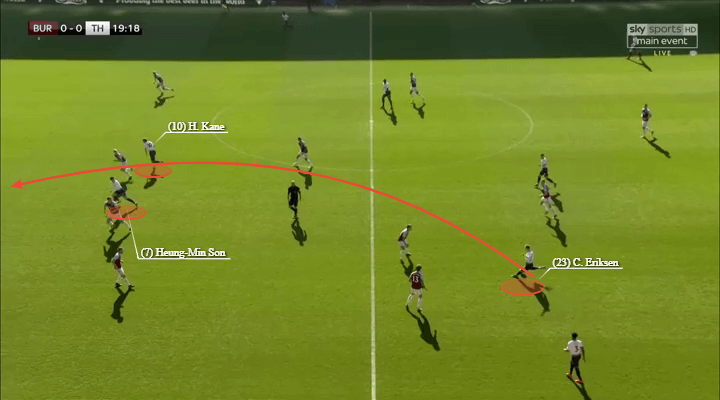 In the situation above Son and Kane intelligently moved in order to cover the offside and then freed themselves with speed runs towards the goal. 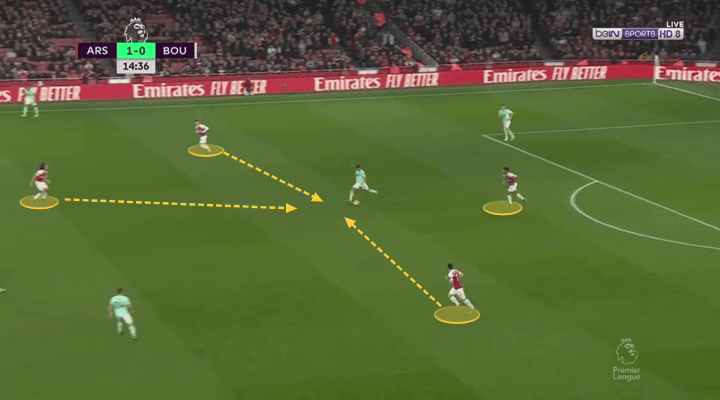 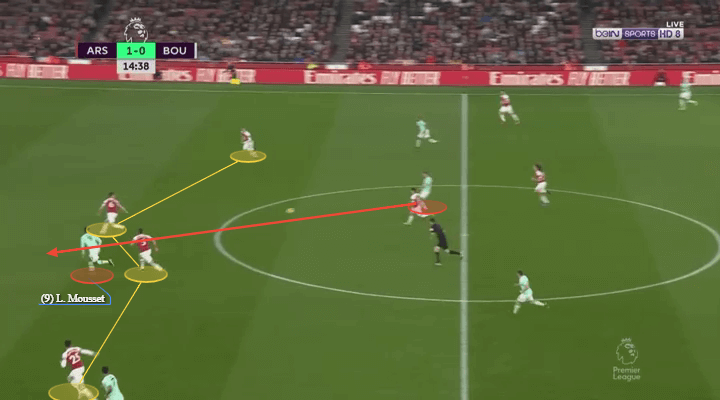 As it happened against Southampton, the Gunners didn’t put enough pressure on the ball and that allowed the Saints to build up smoothly. Leaving too much space between the lines and the highly-positioned defensive line were the reason for Arsenal being exposed by Mousset.

Tottenham could definitely take advantage of Eriksen’s contribution both defensively and attacking-wise. And it’s the same reason why the Gunners could struggle – not having any defensive efforts by both Ozil and Mkhitaryan, if playing. Their midfield duo Xhaka – Torreira, might not be able to balance between in and out of possession movement, having in mind Spurs midfield actions.

It’s hard predicting what Unai Emery’s approach to the game would be. Would Spurs fail to use their creativity against Arsenal or would the Gunners’ defensive actions be too predictable? One thing is sure – it is going to be a tactical battle and the expectations are up high.