Auston Trusty: The next big star out of America?

Auston Trusty is a 20-year-old left-footed central defender playing for the Philadelphia Union in MLS. Having started his footballing career in the USL on an amateur deal with Bethlehem Steel, Trusty was signed on a Homegrown Player contract for the Philadelphia Union in August 2016. Since then, Trusty has become a mainstay in the Union defence. He made 34 regular season appearances in the 2018 season. In the process, he became the youngest player ever to play every minute of every regular season game in MLS history.

Trusty has made 16 appearances across the USA under-19s and under-20s and received his first call up to the full national team in December 2018. Despite not making an appearance thus far for the USMNT, this call up was a clear indication of the high esteem in which Trusty is held. Fans of the Philadelphia Union and MLS see a great future ahead of Trusty.

I will look at the young American’s strengths and weaknesses, what he brings to the Philadelphia Union and what he still has to work on. In addition to this, as Trusty is seen as a long-term prospect for the USMNT, I will compare Trusty’s statistics to the central defenders currently playing for the national team.

Trusty is a defender who loves to defend on the front foot. He very often pushes out of the defensive line to challenge an opposition attacker who has dropped slightly deeper and is looking to turn and attack the Union backline. This is reflected in Trusty’s statistics across his Philadelphia career. 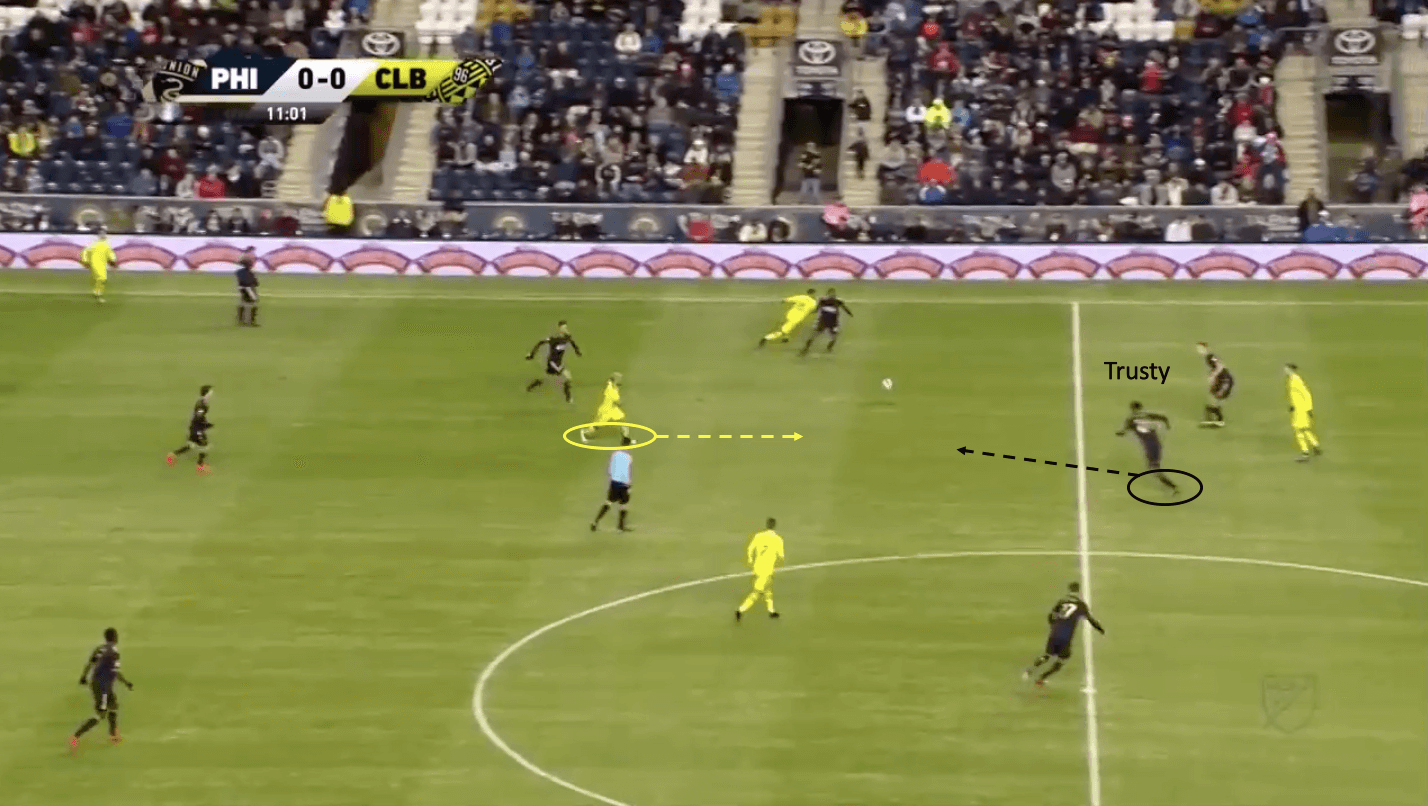 A loose bouncing ball is dropping between Trusty and a Columbus Crew player. Trusty attacks the ball, moving out of the defensive line. He gets to the ball easily before the Crew player and lays the ball off simply to a midfielder. 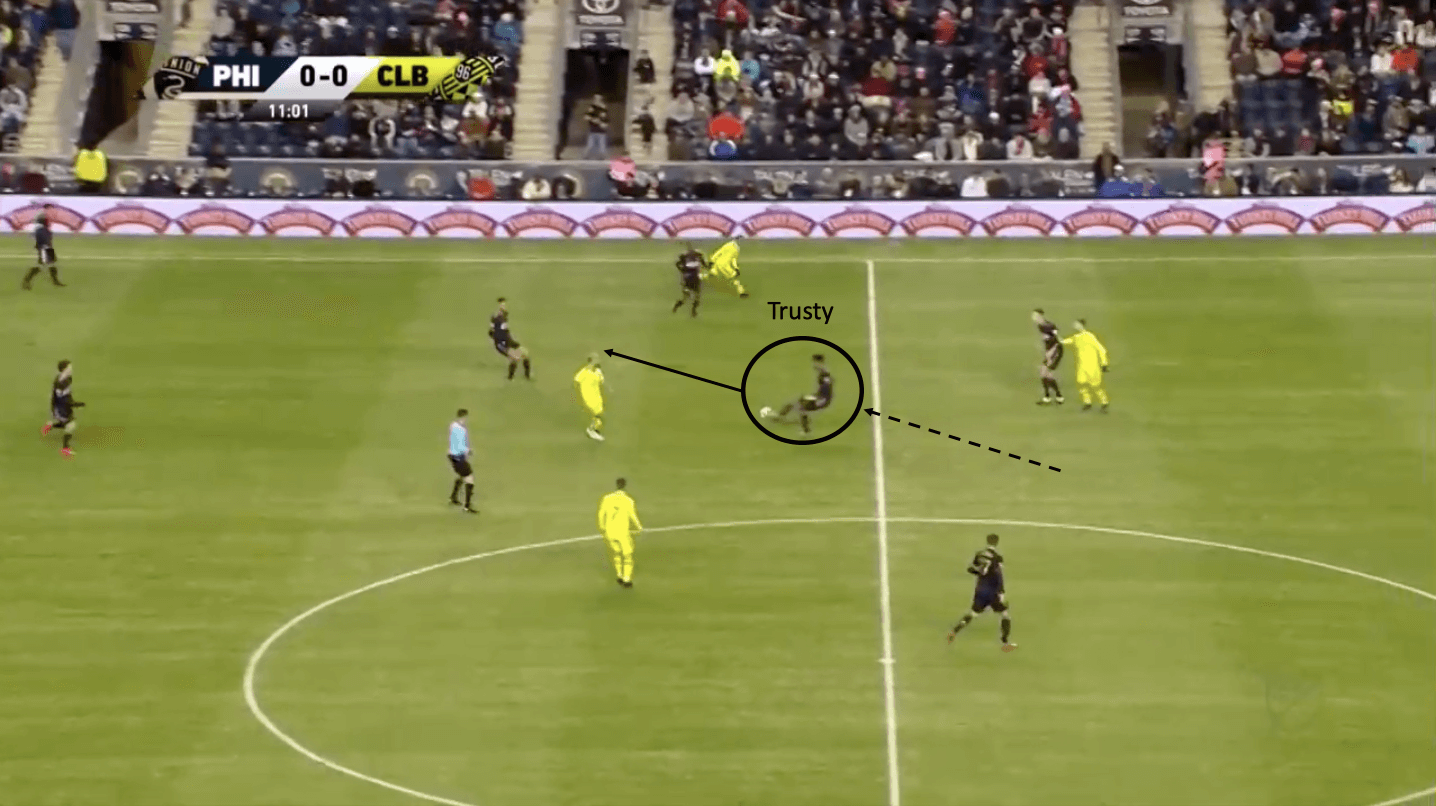 Below is an image from a game against last season’s MLS Cup champions Atalanta, where Trusty is equally as aggressive. A slightly loose pass into the Atlanta forward invites Trusty to move out from the defensive line. 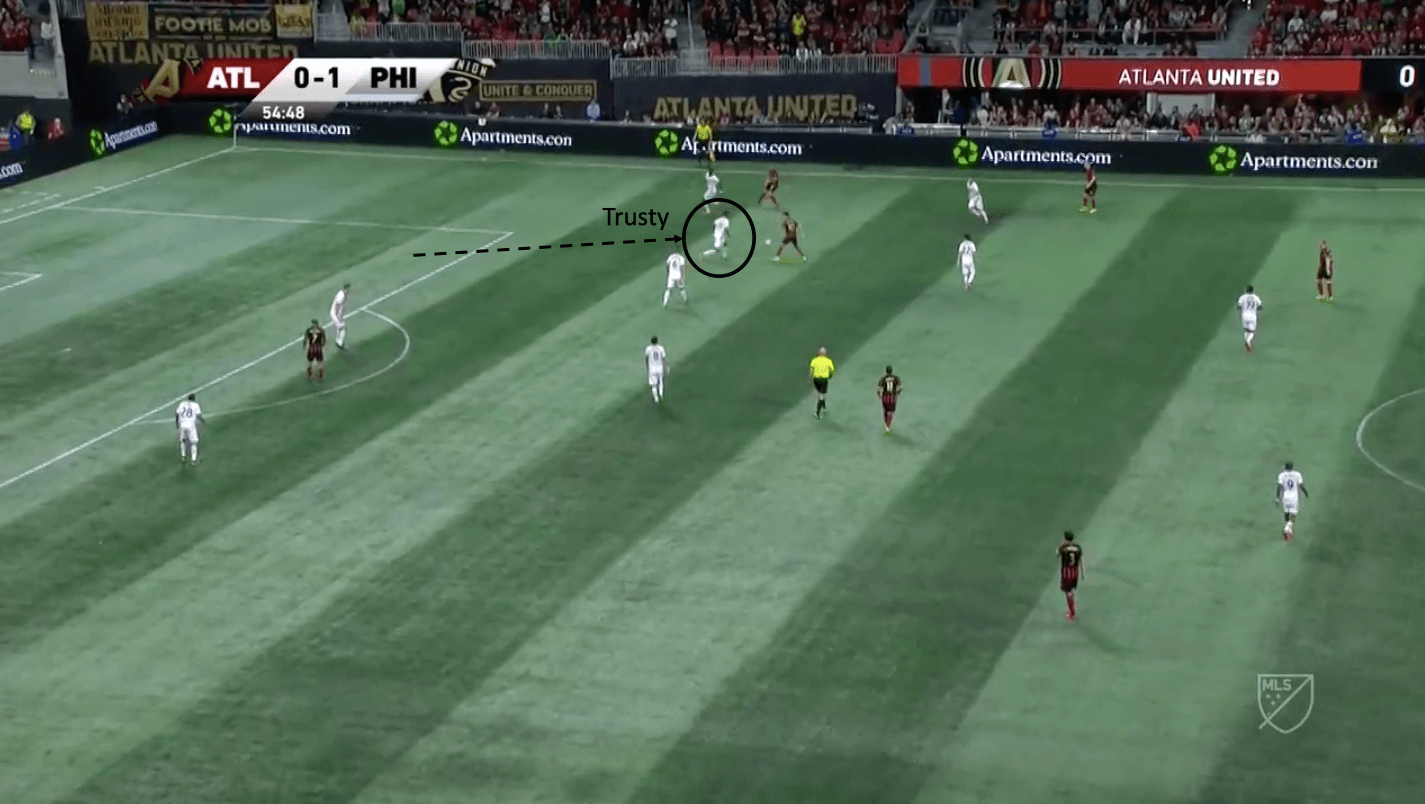 He pressurises the attacker into a loose touch and easily dispossesses him. Having won the ball, Trusty dribbles into midfield and passes the ball off to a midfielder. 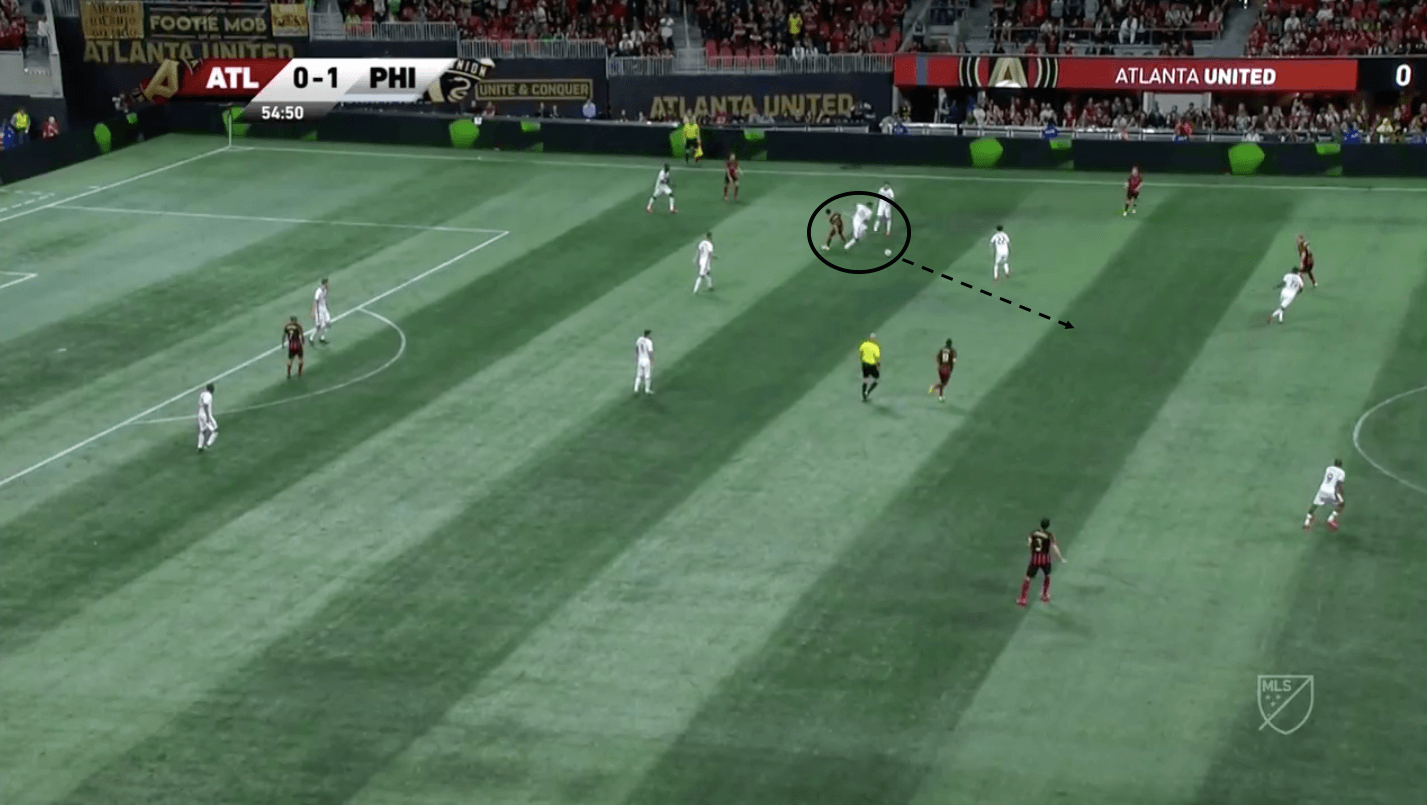 Aware of the threat that Josef Martínez possesses (particularly in transitions) Trusty moves into the midfield with Martínez and gets to the ball before the Venezuelan (below). 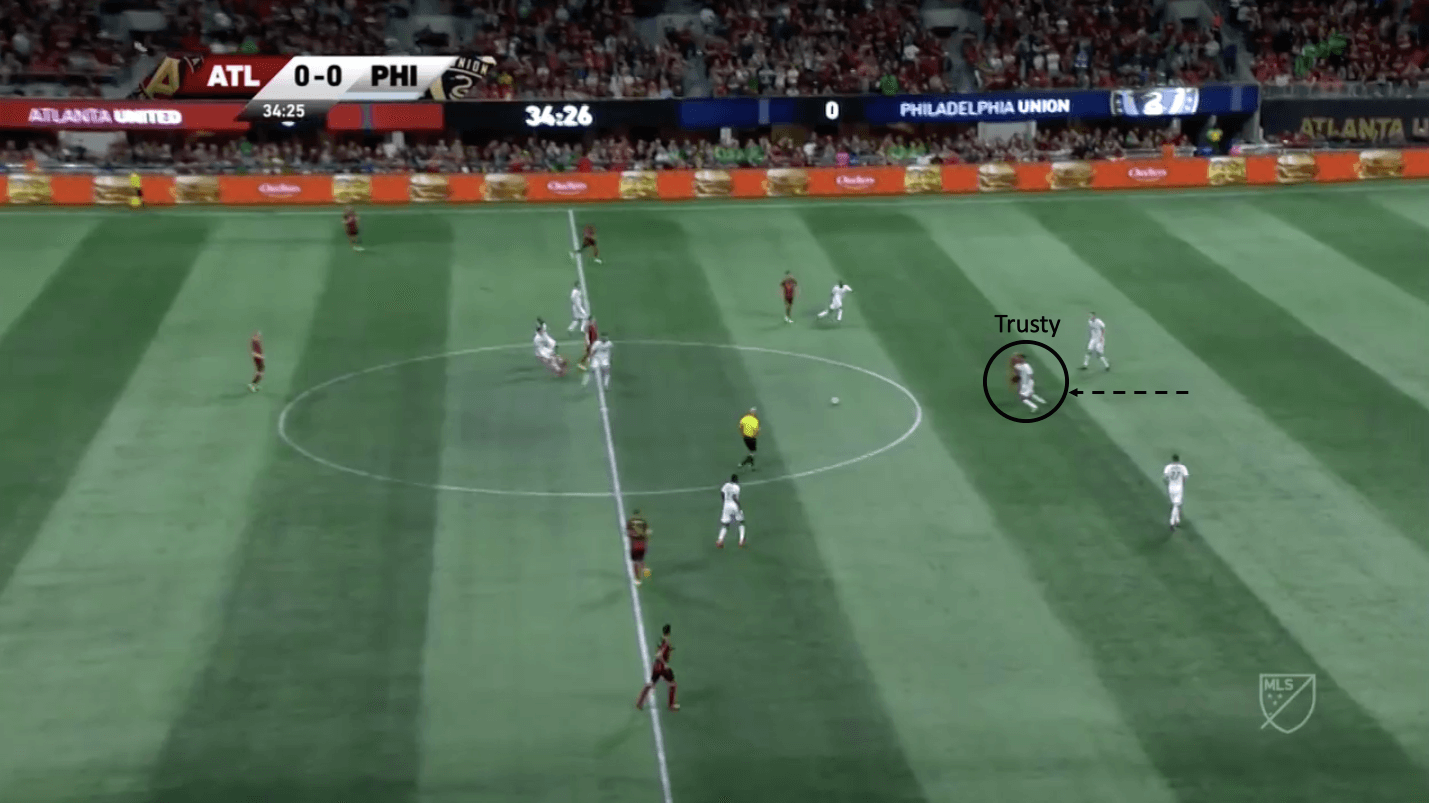 A similar example is below from a game against LA Galaxy last season. Trusty again works aggressively against a centre forward, forcing a bad touch and consequently winning the ball back for his team. 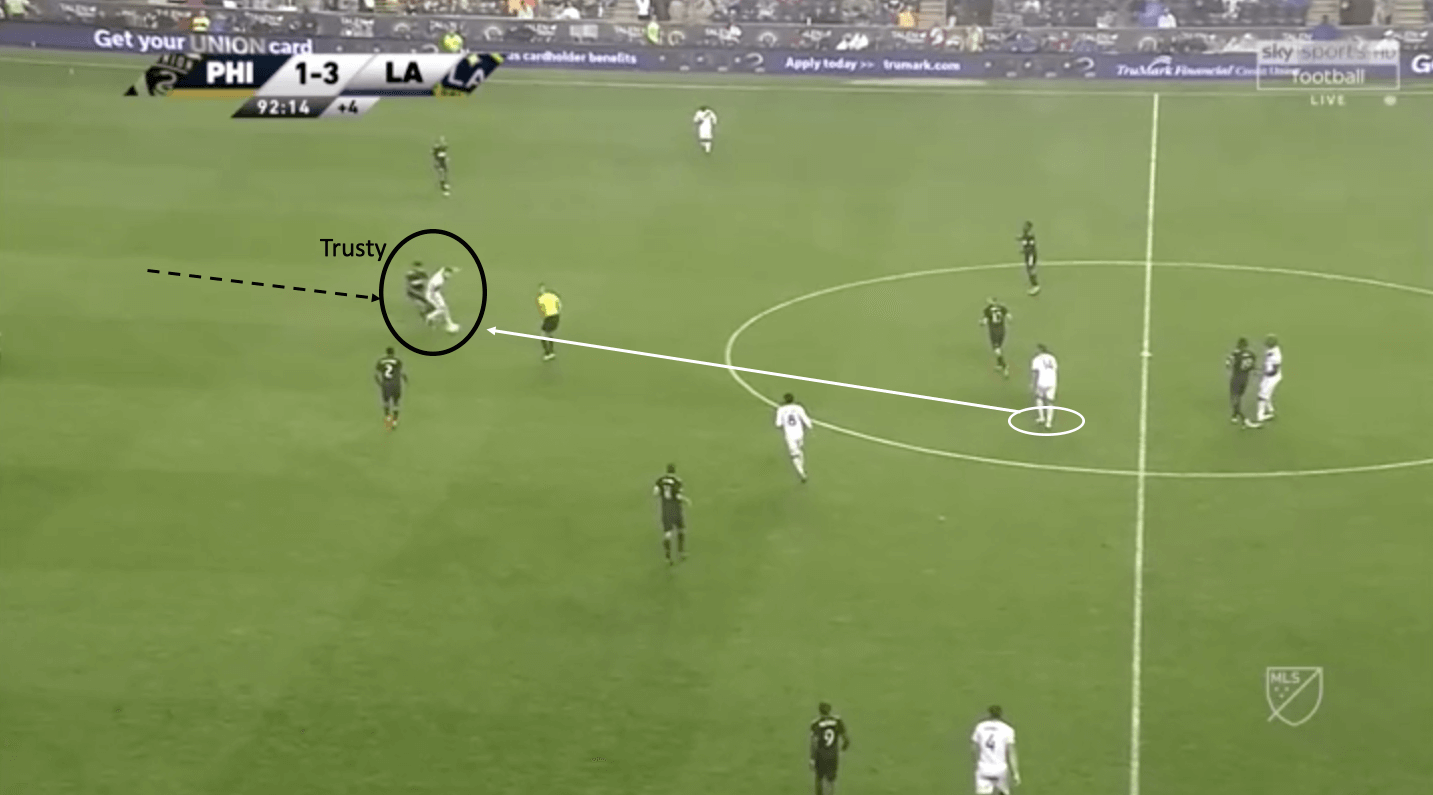 As this is such a staple of Trusty’s game, at times he can overdo it. Sometimes he has the tendency to rush out of defence leaving a big space in the defensive line. As Trusty forms the last line of defence, if he is beaten in one of these scenarios the Union goal becomes very exposed. 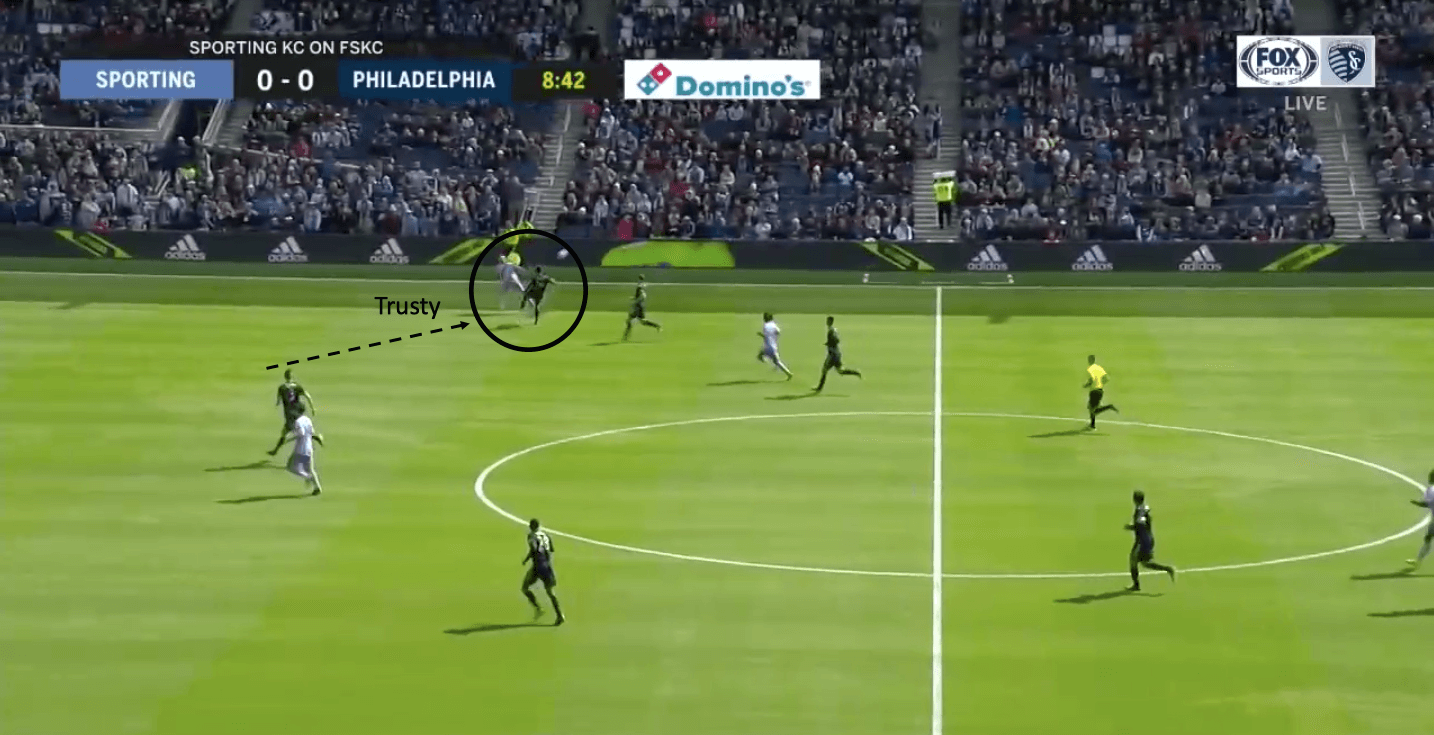 In the example above Sporting KC have played a long ball down the channel and in behind the Philadelphia Union left-back. As the left-sided centre-back Trusty moves across to cover. In this situation, Trusty can afford to be slightly more conservative.

If Trusty covers across and then stands off the SKC player, they will be in a fairly harmless position and the Union will be set up reasonably well defensively. Trusty, however, attacks the ball and misjudges the bounce of the ball. 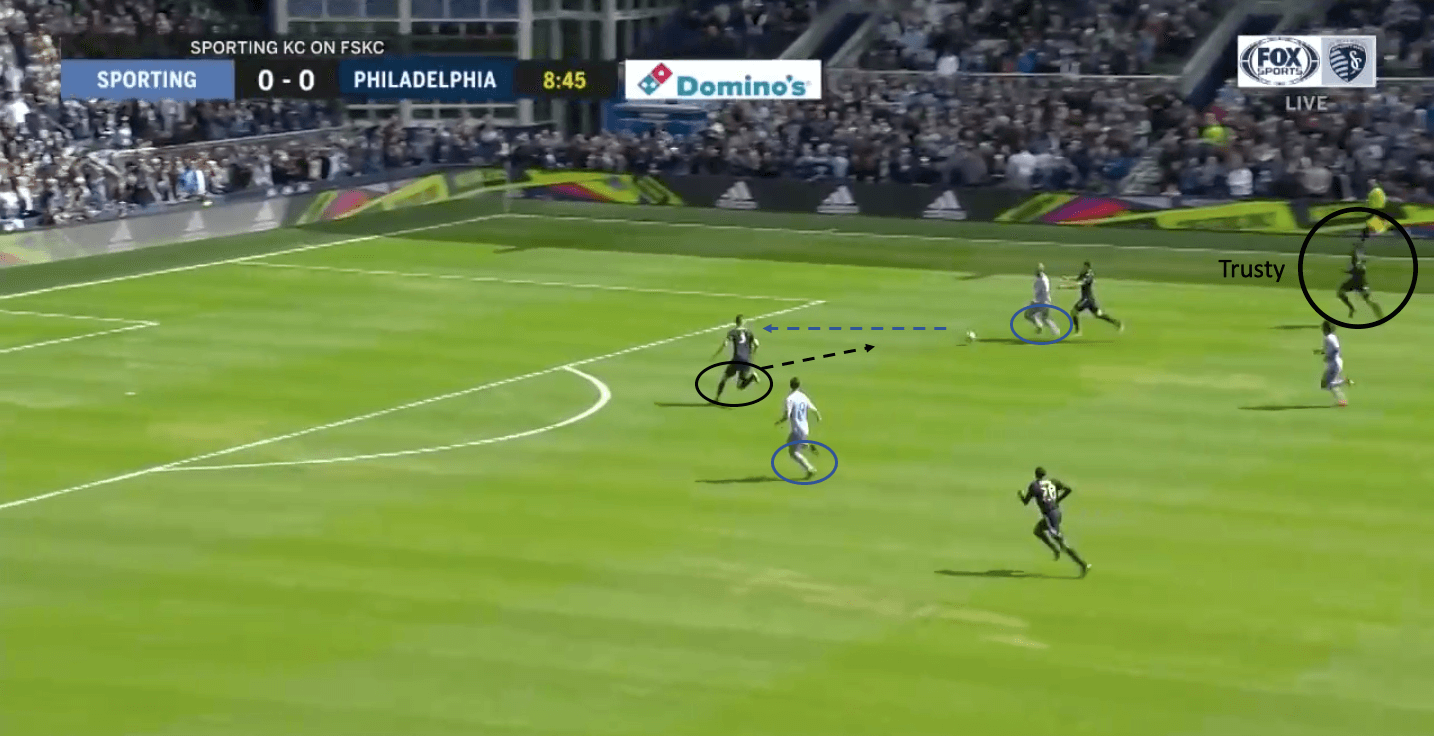 The Sporting KC player can now break in behind with Trusty way out of position. His central defensive partner Jack Elliot is forced to cover across, leaving the SKC player free in the centre of the box. 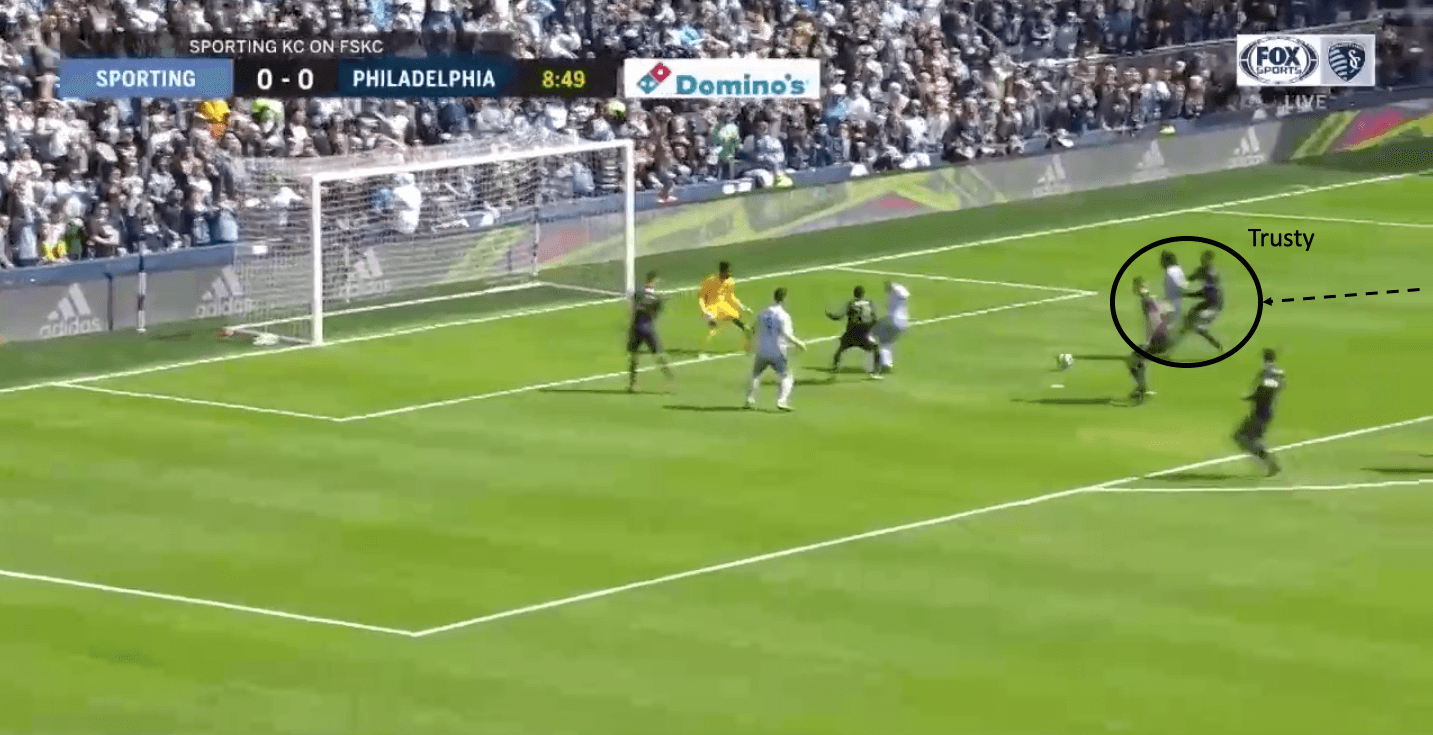 The ball comes to the SKC player in the box who returns it back towards Trusty’s side. In an attempt to make up for his missed interception Trusty puts both hands in the back of the SKC attacker, pushing him to the ground and giving away a penalty. 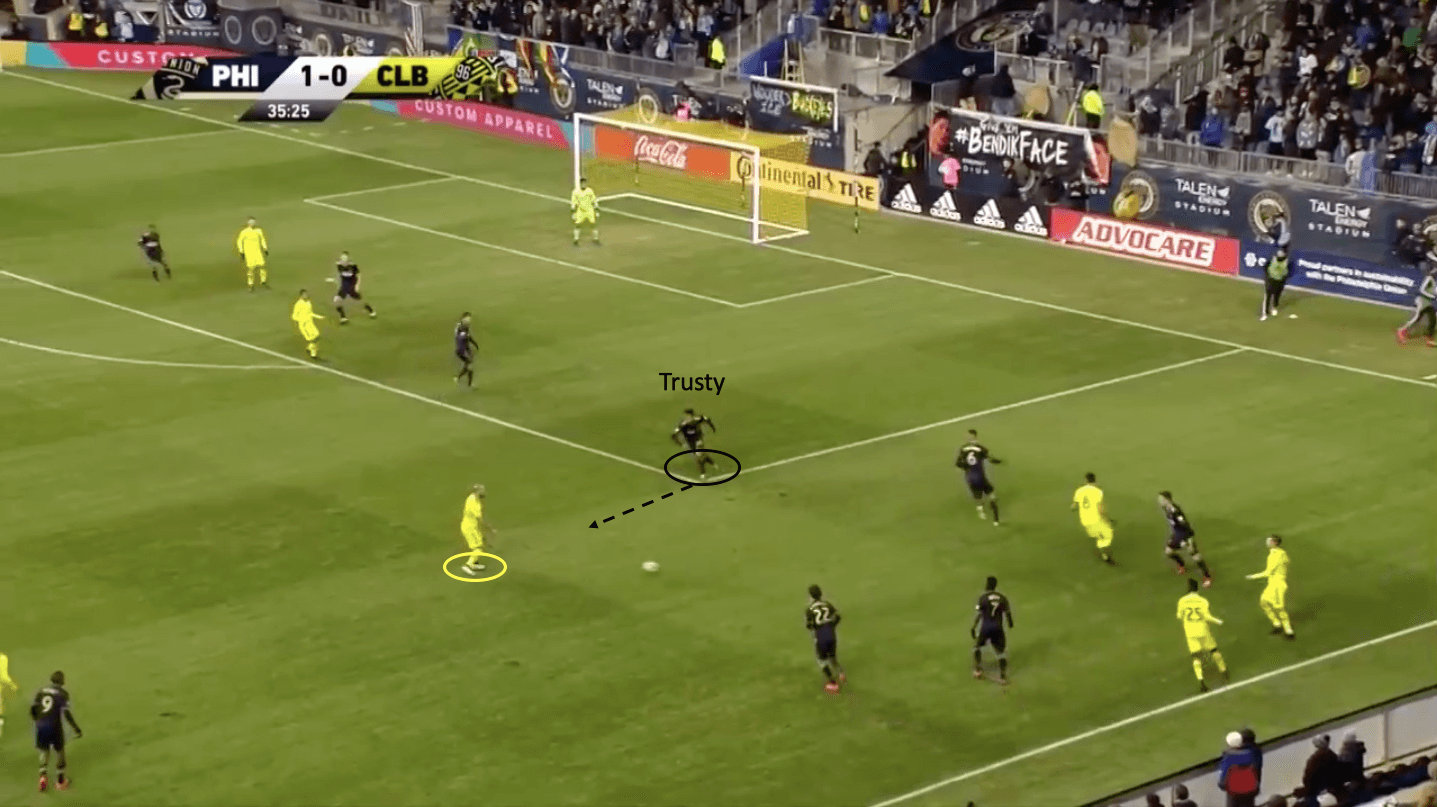 In a similar example above, Trusty takes it upon himself to press Federico Higuaín of the Columbus Crew as he collects the ball in midfield. 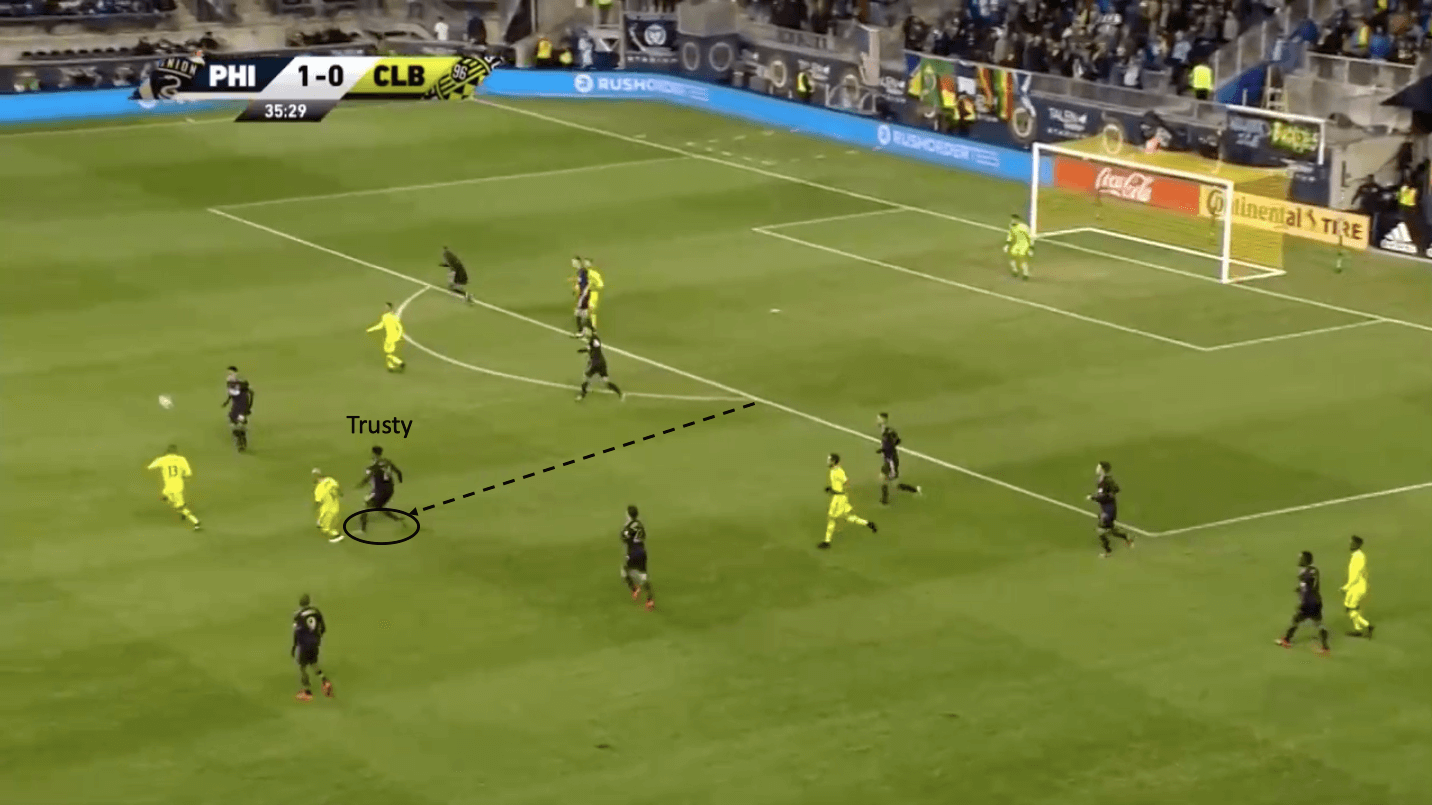 Trusty pushes Higuaín back but as a result, he has left a huge hole in the defensive line. Admittedly, one of Trusty’s teammates should probably recognise this and cover for the centre-back, but in reality it isn’t Trusty’s duty to press this high when the Union are defending. 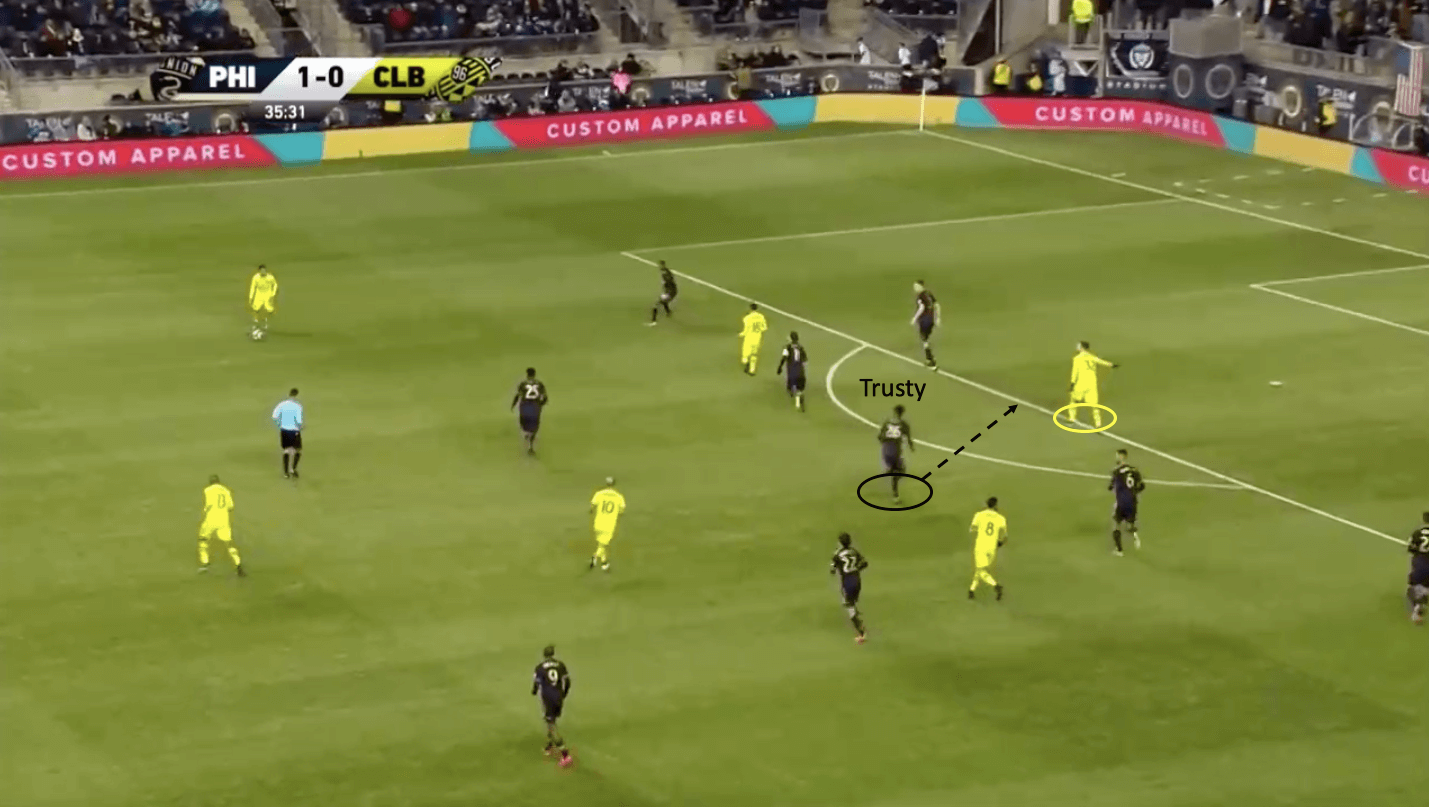 A Columbus Crew player is now free in the centre of the box. Trusty notices he’s out of position and begins to move back into position. 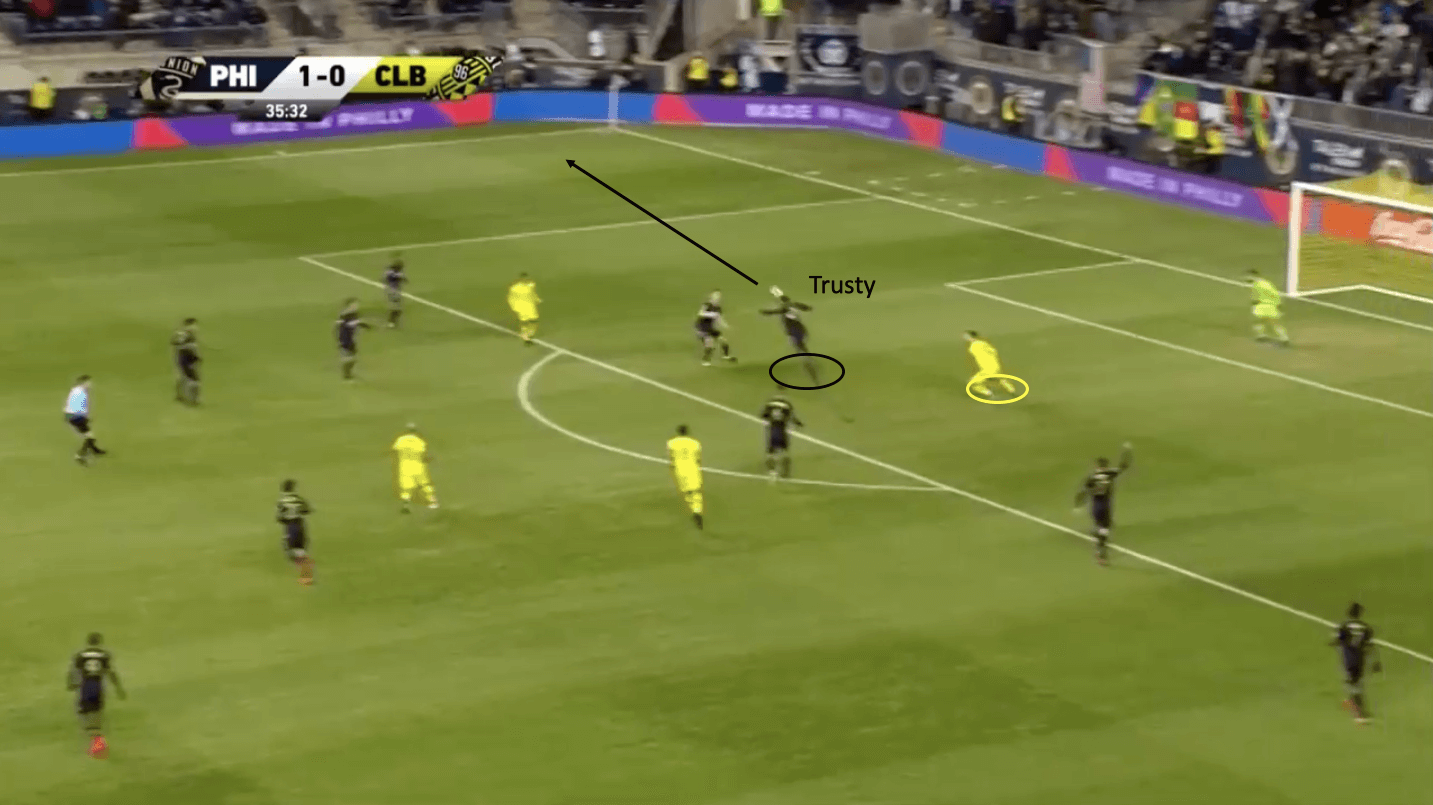 Trusty successfully regains his position. However, with a better cross from the Columbus Crew winger, the Union would have been in trouble.

Trusty’s awareness and defending of space

Although Trusty can sometimes come unstuck when it comes to defending aggressively, the images above do indicate that he has a decent level of defensive and spatial awareness.

Below is a good example of Trusty’s aggressive defending and awareness of where space is on the pitch. He has again intercepted the ball before it can reach Josef Martínez. With the Atlanta United defence positioned high up the field, Trusty spots the space in behind and delicately side-foots the ball over the top of the defence for the Union striker to latch onto. 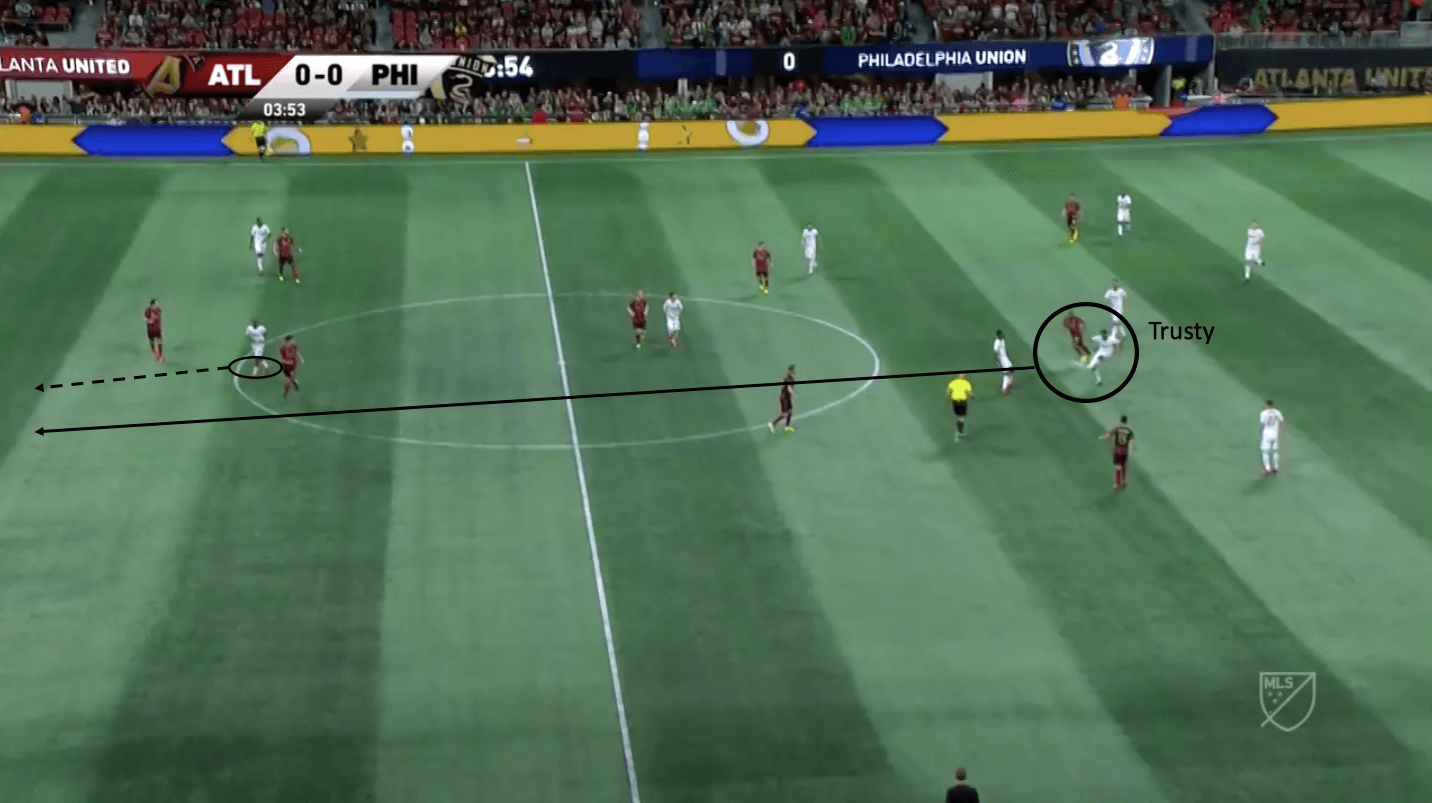 Not only is Trusty effective at defending high up the field but he is also incredibly aware when defending the box. In the image below, a Sporting KC cross has gone over the head of Trusty but he knows his job isn’t over. Before the ball is knocked back into the box, Trusty has anticipated where the knockdown will fall. 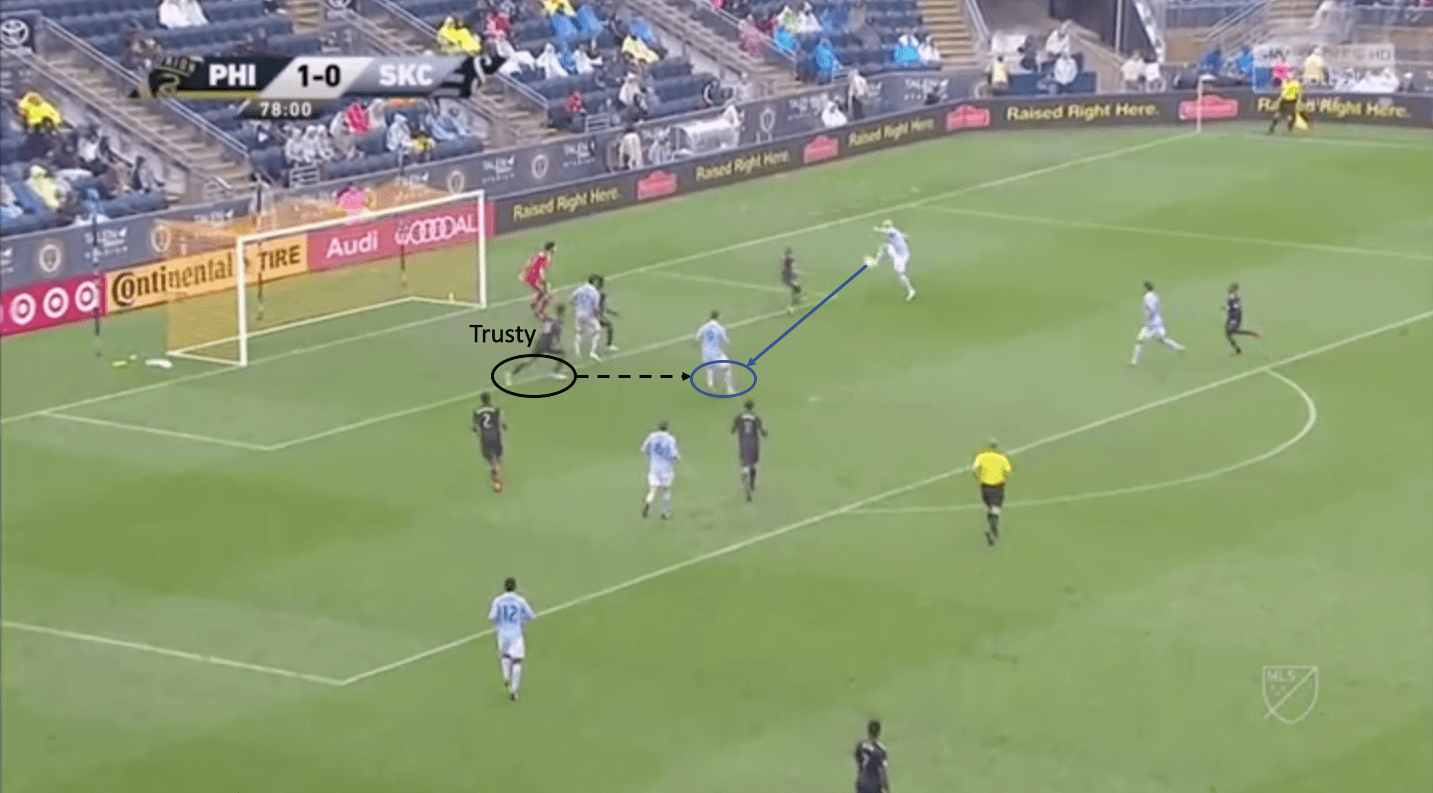 Trusty closes the space and clears the ball away. 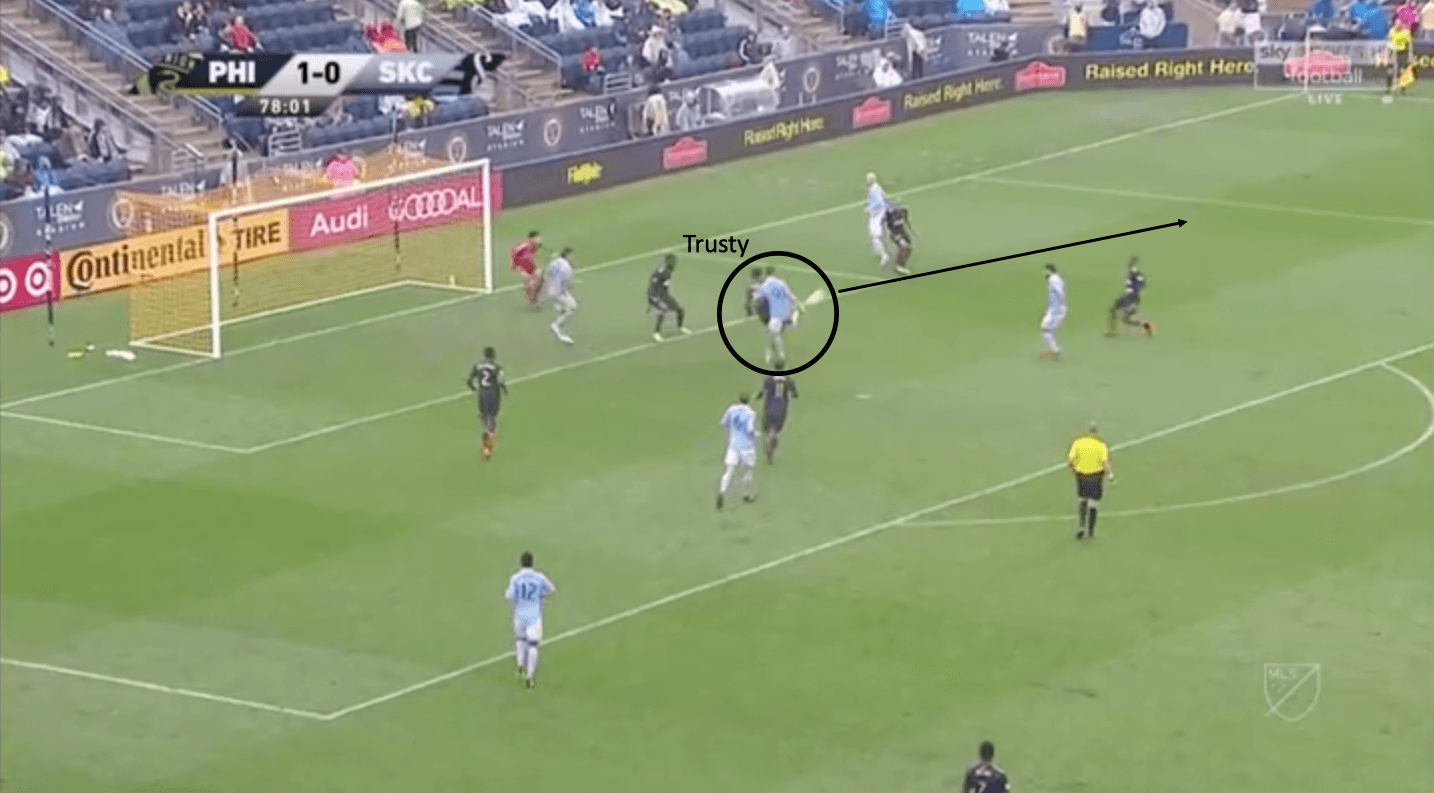 Below, from a different game, the Columbus Crew have moved into an optimal attacking position. However, Trusty knows that the only viable target for the Crew winger is the attacker positioned around the penalty spot. 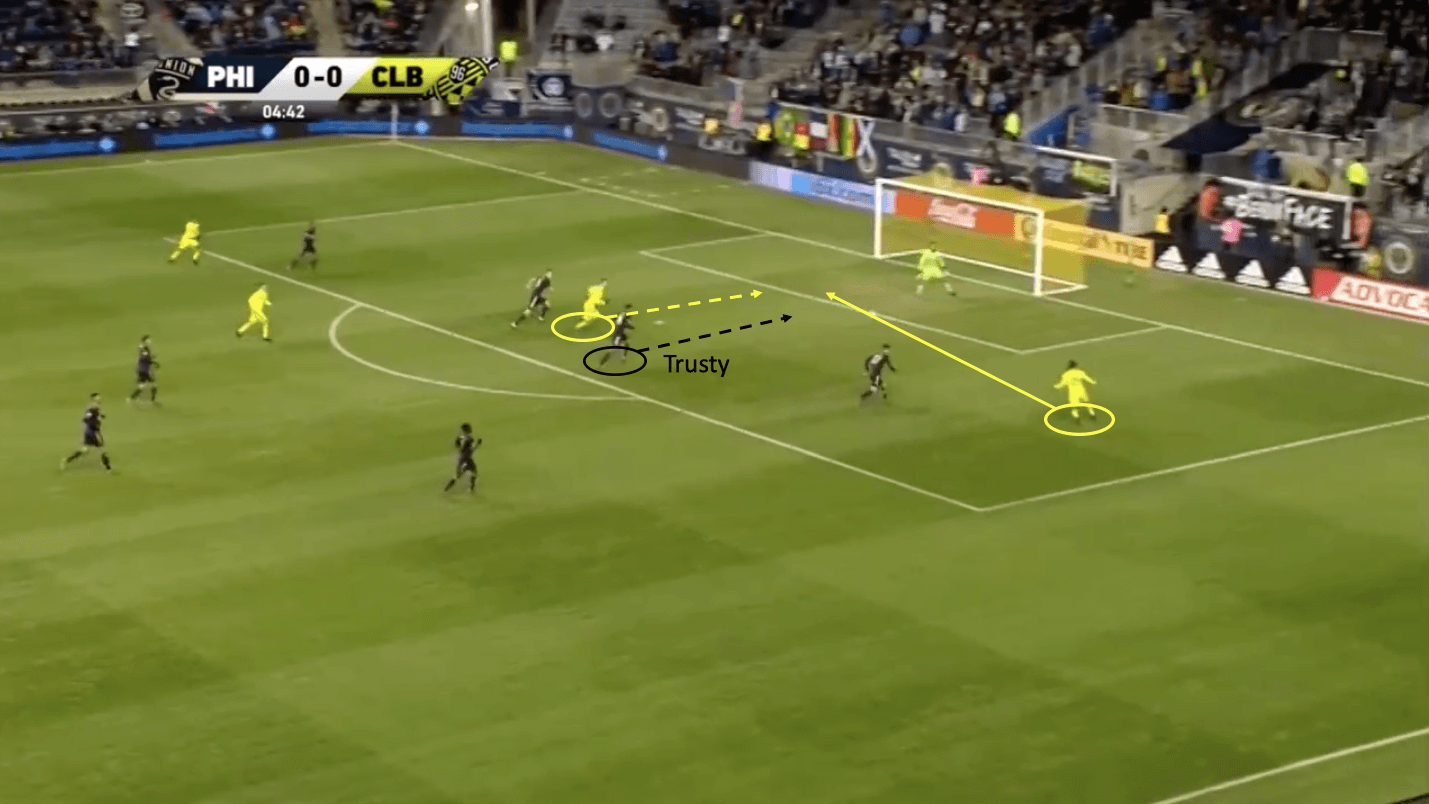 Trusty, using his athleticism and defensive awareness, successfully drops back and blocks the cross into the Crew attacker. 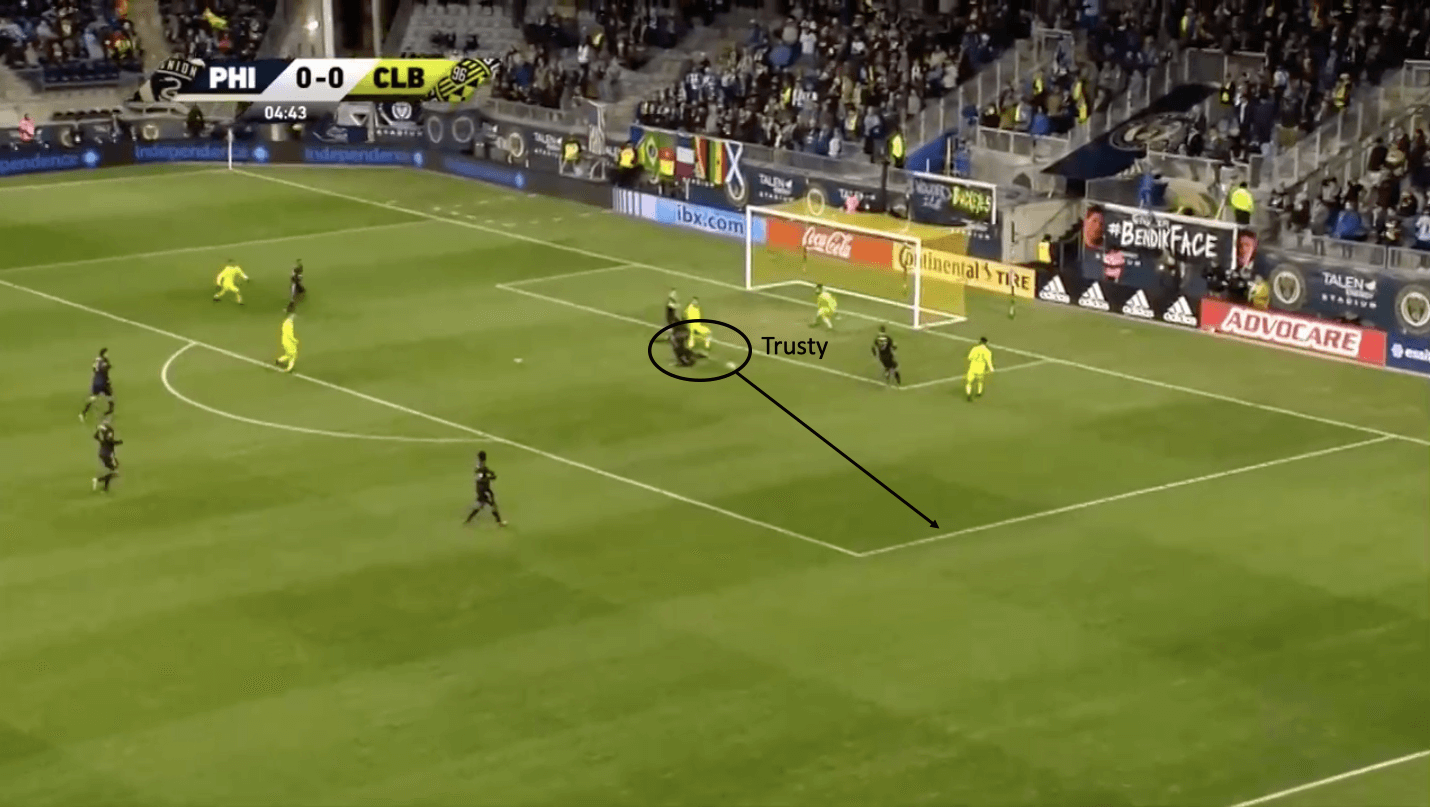 The images below encapsulate all of Trusty’s defensive strengths. The Philadelphia Union’s left-back has tucked inside in order to block a pass into the Montreal centre-forward. Trusty now has two men to cover as the Montreal right-winger has been left unmarked. 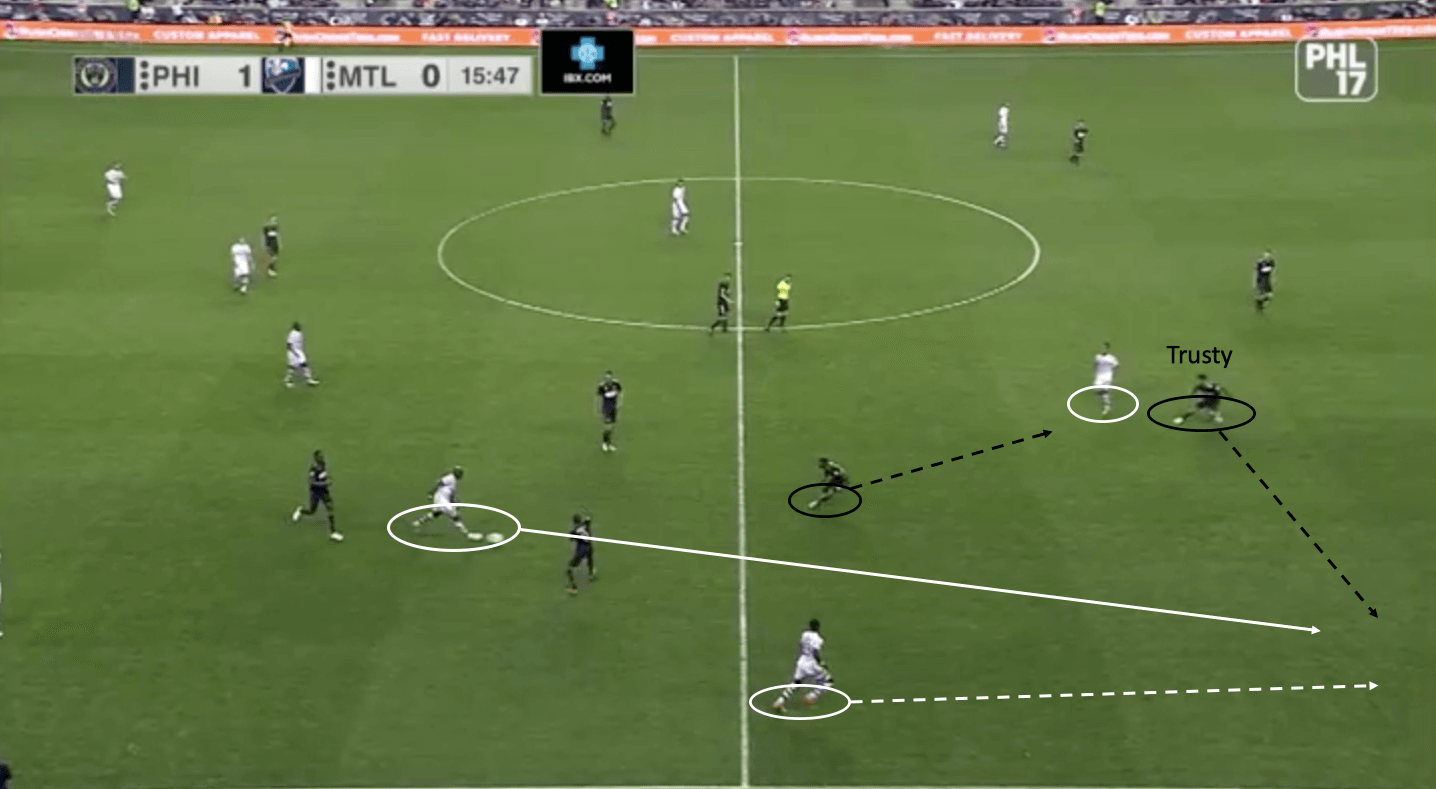 Trusty alters his body position and moves across to cover the distance and intercept the pass to halt a dangerous Impact attack. 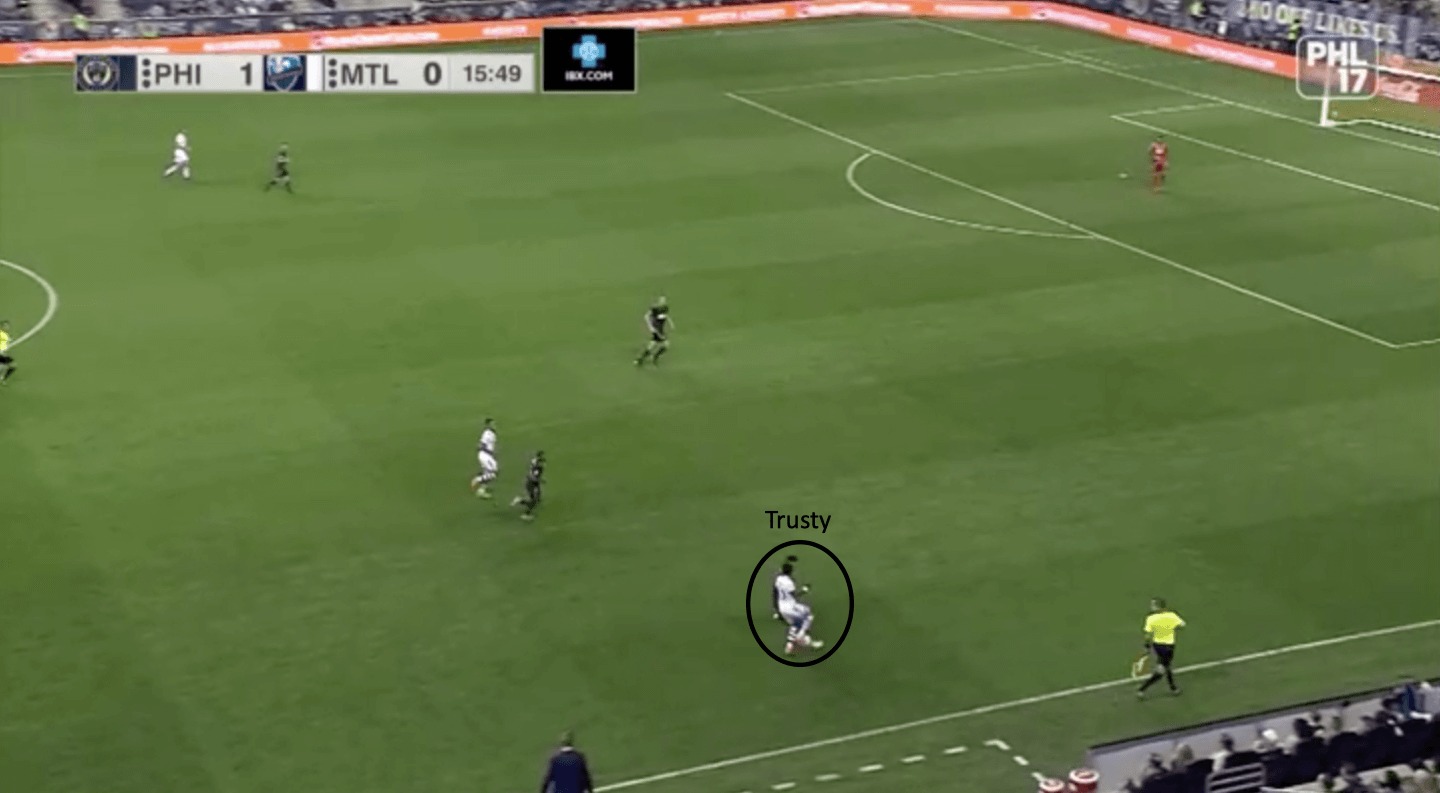 Trusty is a very solid defender but an aspect of his game that is slightly lacking is his ability on the ball. Looking at his statistics when compared to Miazga, Ream, Brooks and Gonzalez, Trusty makes 39.81 passes per 90 mins. This is marginally more passes than Tim Ream (who plays for one of the worst sides in the Premier League) and more than Omar Gonzalez.

However, he is the least accurate with his passes. Trusty completes 80.3% of his passes compared to 85.1% for Miazga, 88.8% for Ream, 89.3% for Brooks and 86.1% for Gonzalez. Admittedly, when comparing the passing ability of different players one must consider the differing playing styles of the respective teams.

Trusty plays more long passes than the defenders mentioned with 7.29 per 90. However, he tends to be relatively unsuccessful with his long balls. Trusty completes 45.7% of his long passes. This is a marginally better completion percentage than Miazga (45%) but is worse than Ream (50.9%), Brooks (62.2%) and Gonzalez (56.4%).

To further emphasise Trusty’s often wayward forward passing, the Union man only completes 69.2% of his 18.17 forward passes. Again, this is the lowest total when compared to his American counterparts who all complete at least 76.7% of their passes (all stats according to Wyscout).

For the Philadelphia Union, Trusty has a tendency to play aimless long balls down the channels and often turns the ball over in these situations. What stands out the most, however, is that Trusty is very one-footed. He strongly favours his left foot and while this can be a desirable trait for a central defender, it can often make it more straightforward to anticipate his passing.

Trusty often finds himself dribbling towards the left touchline and instead of turning back inside onto his right-foot and playing a simple pass he instead knocks the ball long, giving the ball away.

When presented with time and space Trusty can be an effective passer as shown in the image below. However, as mentioned when he is pressurised and forced towards the touchline, his ball-playing ability drops. 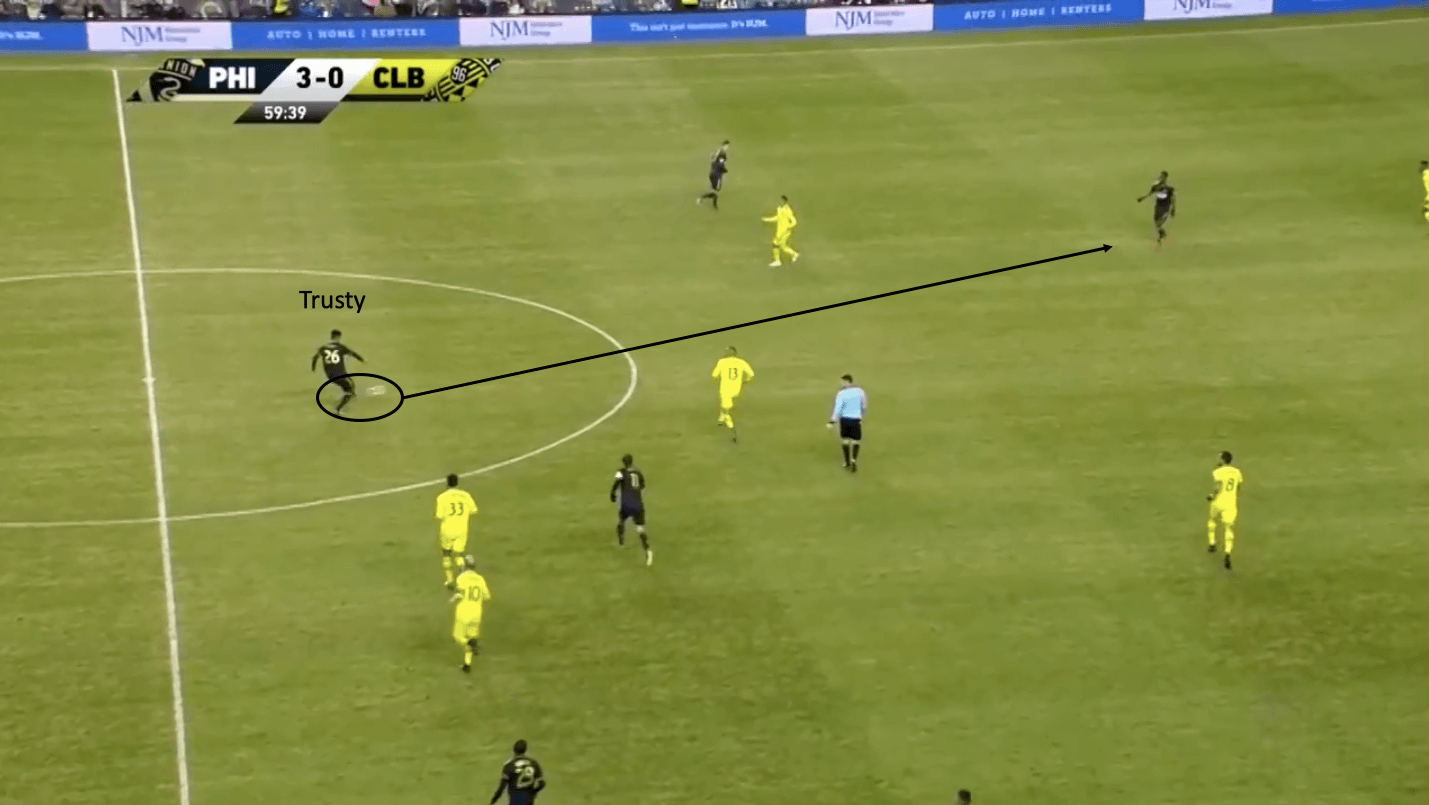 When a player like Trusty begins to play regularly and perform well in MLS, the obvious questions about his ability to make the jump into Europe arise. Comparisons with the likes of Tyler Adams who recently made the successful jump from New York Red Bulls to RB Leipzig are bound to come up.

However, given the link between NYRB and RB Leipzig, the move for Adams was a smooth transition and something which Trusty doesn’t necessarily have access to. On top of this, having played only 34 MLS games Trusty’s development isn’t quite at the level of Adams’. A move to Europe at this stage in his career would arguably be too soon.

At 20 years old and with an impressive physique and solid understanding of the game, Trusty’s time will come. However, for now, he still needs to refine aspects of his game. If he is to make the move into Europe, a second-tier league would be a more advantageous location for the young American defender.

With his direct rivals in the national team outperforming him in key statistical areas as well as a recent omission from the USA under-23 side for fixtures against the Netherlands and Egypt, it is important for Trusty that his career doesn’t stall. Another impressive and ever-present season for the Philadelphia Union in 2019 is all Trusty can concentrate on now. If the Union are able to make the MLS playoffs, then European clubs will start sniffing around.