Jon Dahl Tomasson has recently been appointed as the new Blackburn Rovers head coach. Following a successful period in Sweden with Malmö FF, winning back-to-back league titles before leaving in December 2021. Tomasson is ready for his next opportunity and has taken the role with the great ambition of making Blackburn a ‘sustainable Premier League club’.

In this tactical analysis, we will delve into the former AC Milan and Newcastle United players’ approach to setting his team up and the tactics he uses. This analysis will give a clear understanding of what Blackburn Rovers can expect in the 2022/23 EFL Championship season.

In this section, the data from Malmö’s 2021 Allsvenskan campaign, when using a 4-2-3-1, will be compared with Blackburn Rovers data from their 2021/22 EFL Championship campaign when using their most-used formations, 3-4-1-2 and 4-2-3-1. Of course, there is going to be a difference in data due to the league that both teams play in as well as their league position. 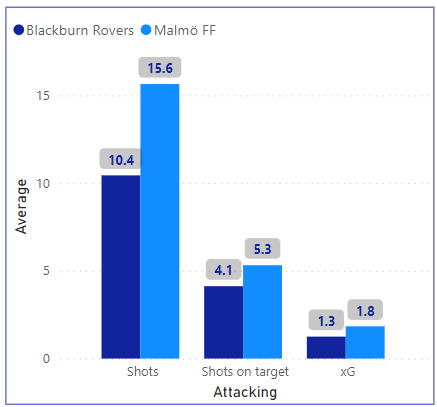 Attacking-wise, Malmö score better in the key areas. Tomasson’s Malmo averaged 15.6 shots per game in comparison to Blackburn’s 10.4. This is a clear indication of how Tomasson wants his team to play. Free-flowing attacking football is something which will excite Blackburn fans. The chances created for their main man Ben Brereton Diaz will only lead to more goals for the Chilean international. 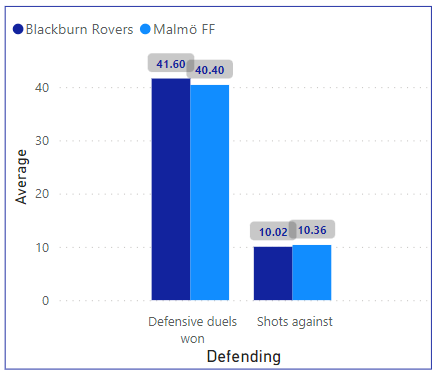 Defensively, there is little to split the sides. Blackburn are already somewhat defensively sound finishing around midtable for goals conceded this season. It is an area which can be improved and Tomasson’s style of play out of possession will do so. 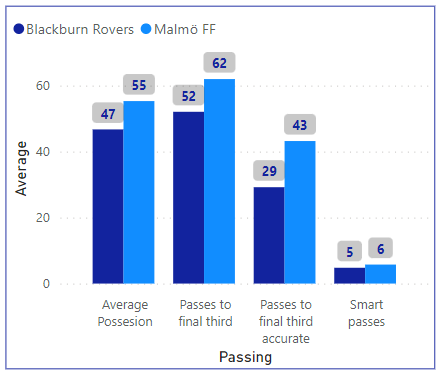 Another area in which Malmö outshone Blackburn is passing as their average possession was 8% higher. This is vital as more possession allows for Tomasson’s team to establish themselves and break the opposition down.

It’s not just possession, but it is useful possession. Regarding passes to the final third, Malmö made 10 more per 90mins than Blackburn and with a 14% higher accuracy. It is clear that Tomasson wants his side to be comfortable playing forwards and progressing the ball.

In possession, Tomasson set his Malmö side up primarily in a 4-2-3-1, something that the current group of Blackburn players are used to playing. This formation was utilised well by Tomasson as he managed his double pivot very well. When building up, both pivots must understand their role.

Below are the midfield rotations which ensure Tomasson’s side is able to play out comfortably. Rotation in the midfield is vital and something that will be developed and brought into his Blackburn side. Following the departure of Joe Rothwell, a midfield partner to play alongside Lewis Travis is probably a high priority for the new boss over the summer window. 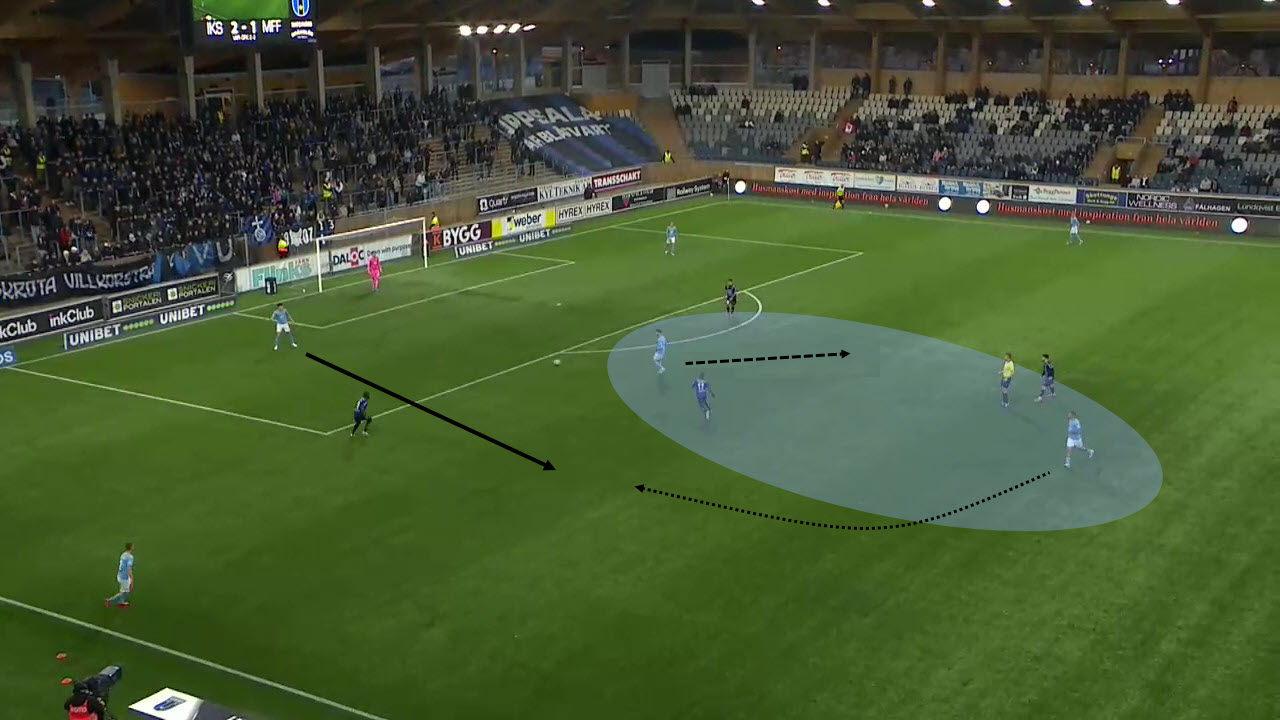 When the Dane’s side established possession and are building up further up the pitch, his team often adopts a 4-2-4 formation with the ‘number 10’ playing as a second striker. By doing this, his Malmö side ensured space for the midfield to get the ball comfortably. The idea behind this set-up is to allow space out wide for the fullbacks to progress the ball.

When the possession reaches the attacking players, because there are so many, quick combinations are played and Malmö break teams down with ease. Another advantage of this setup is that it allows for the pitch to be stretched which gives space for the attacking players to drop deep into without being under too much pressure.

For this to work, patient build-up play is required and all players must master their movements to allow for progressive passes to be played. The narrowness of the front line pins the opposition defence which gives space out wide for Tomasson’s fullbacks to drive forwards into. 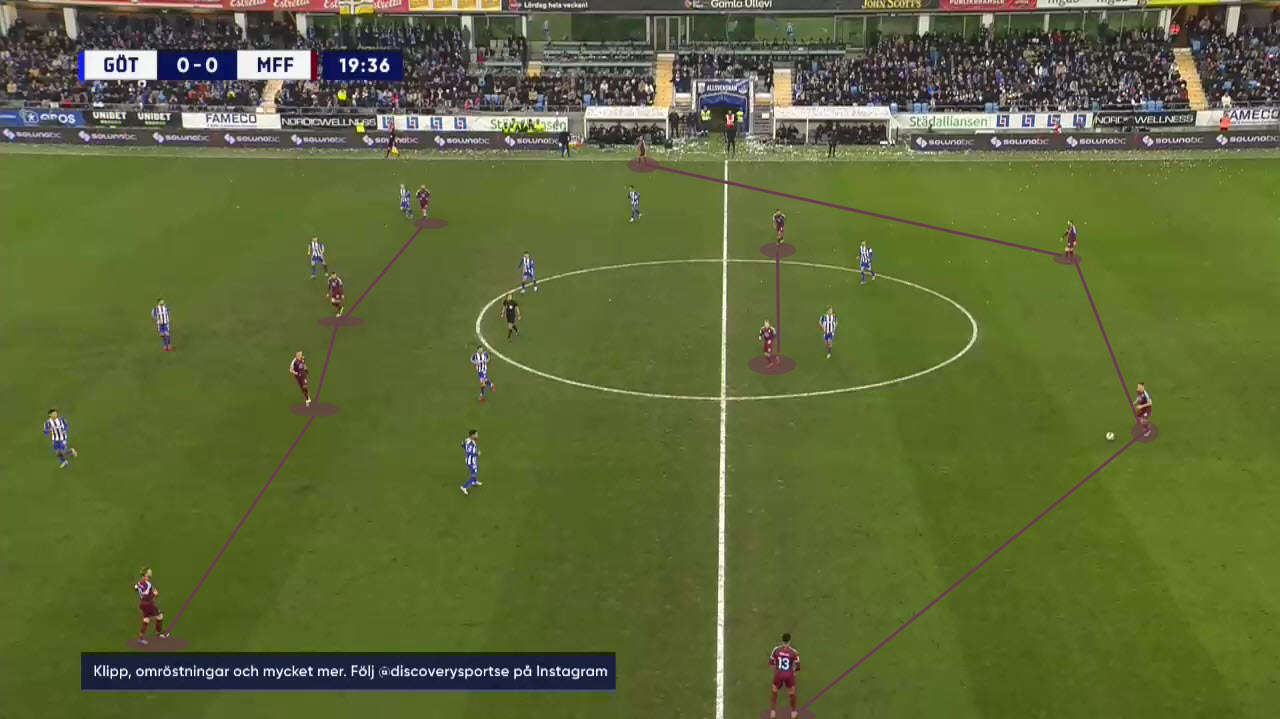 The role of the fullbacks is vital in Tomasson’s system. This is because he likes to operate his front three very narrow. By doing this it gives the attack no width so the fullbacks must be able to join the attack to provide this. Right-back is a position which is likely to be strengthened with the uncertainty around Ryan Nyambe. Harry Pickering is an ideal player for Tomasson’s system and the left-back will most likely be his first choice on that side.

Rovers attacking three is an area of good quality. John Buckley has played the number 10 role a lot under previous Tony Mowbray but the returning Bradley Dack could also prove vital if he reaches his best. Out wide Dolan, Hedges and Poveda are all becoming established Championship players. Over the last few days, Blackburn have been linked with Todd Cantwell a player who is ready-made for Tomasson’s style, a wide player who loves to drift centrally to impact the game.

Tomasson loves his team to link up and play quick combinations with each other. The striker in the attack tends to be making runs in behind or making his way into the box for a cross. 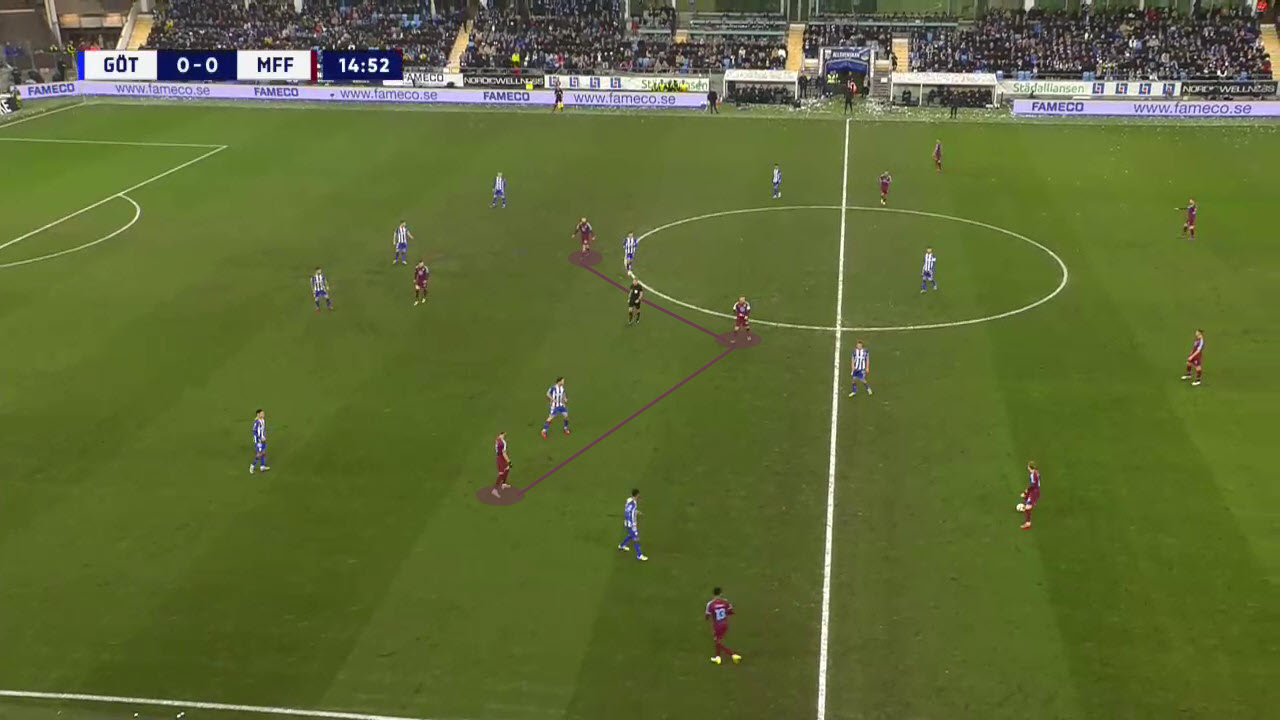 When attacking the box Malmö sometimes played the ball wide and set up ready for a cross. Due to their lack of attacking width, it can leave space at the back post which must be attacked by the fullback. If perfected and practised it could become an interesting tactic and an effective way of attacking the penalty area. 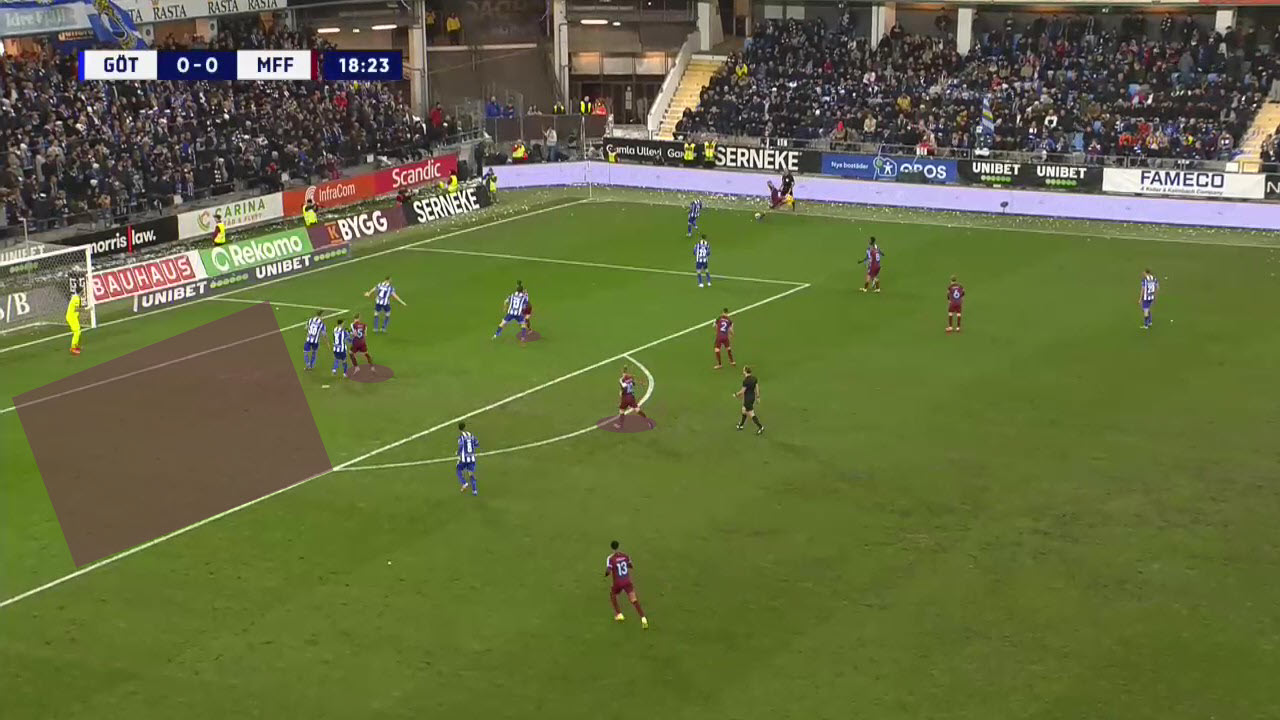 When Tomasson’s team is without the ball they take up a very organised and structured role, depending on where the ball is on the pitch. When engaging higher up the pitch, a press will take place. This press is usually sustained for a long period and involves the four attacking players.

The intelligence of Tomasson’s players allows for them to set traps and engage early with the opposition’s next pass. As seen below the next two passes are already being monitored and starting to be pressed. This way of playing involves a highly disciplined side but also a fit one. Pressing the opposition high disrupts their rhythm of playing out and building up. To ensure this is successful all players must be on board and focused on the next pass. 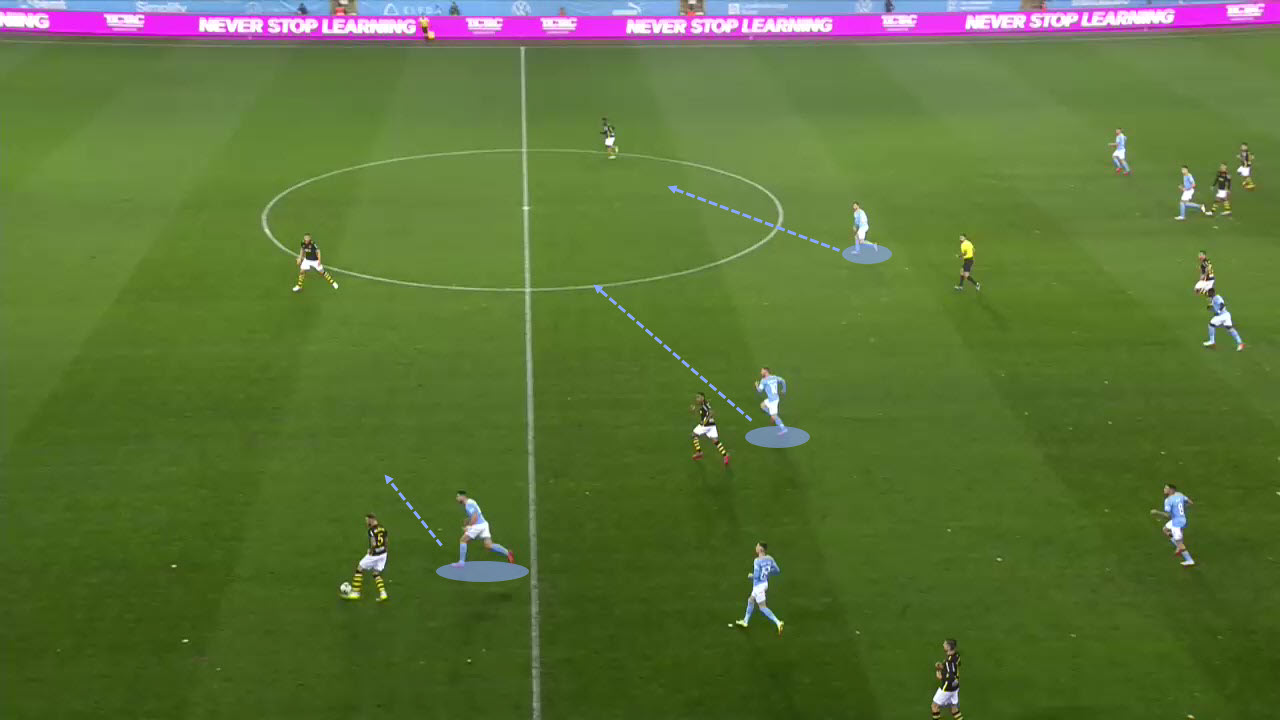 When not engaging in a press Tomasson sets his side up in a mid-block. This midblock takes place in a 4-5-1 formation. The three attacking players, who play behind the striker, drop deep to create a bank of five.

The midblock should not be viewed as a conservative way of defending as Malmö acted very aggressively in their defensive shape. The striker engages with the opposition’s defenders to hurry their time on the ball. As a whole, Malmö squeezed aggressively up the pitch at any given chance.

The gap between the back four and midfield five shows the aggressive nature of Malmö’s midblock. A large amount of space is left which requires the defence to mark any player who finds themselves in there. This approach is risky as if a team is able to get a midfielder to turn in the space then this could create a dangerous situation. But, the aggressive nature of the side usually nullifies any opportunity for the opposition to capitalise. 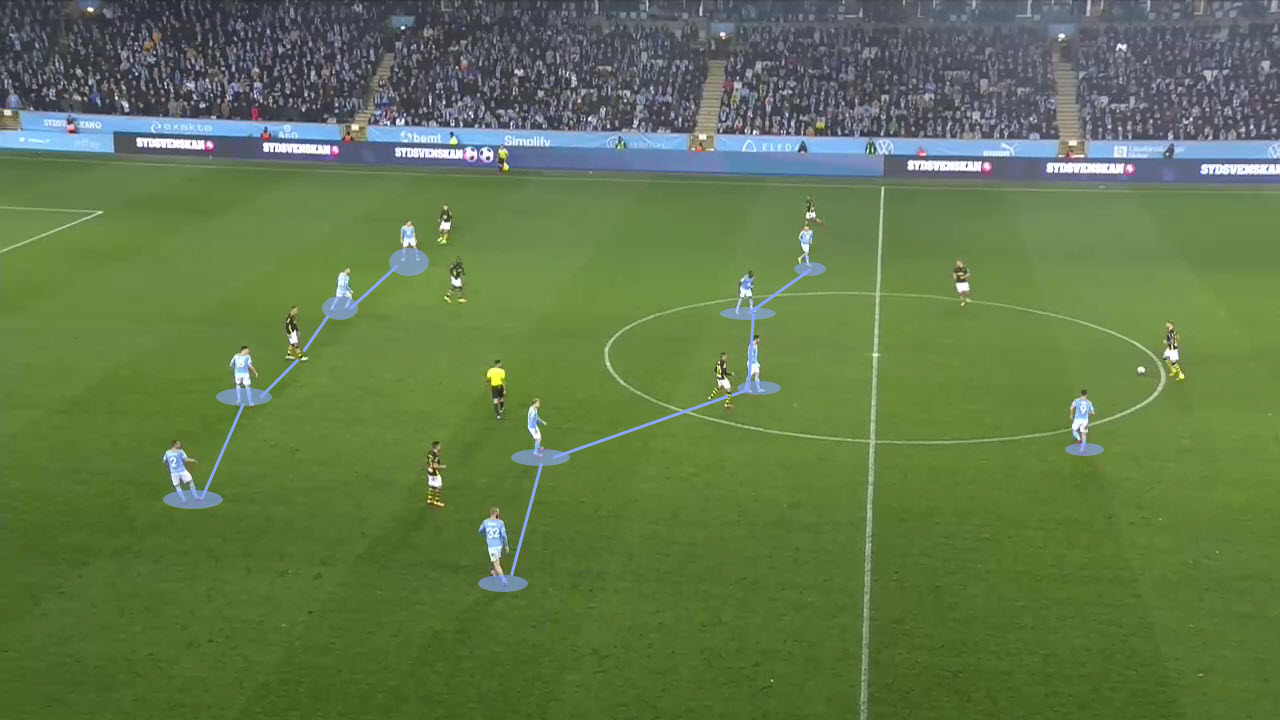 When defending the box Malmö set up in a way not many sides tend to. This being, the central midfielders covered the wide areas. Doing this is allowed for the back four to stay very narrow and tight inside the box, closing off any space. This gave Malmö a better chance of clearing the first ball but also reacting first to anything that may follow.

The midfielder covers the wide area where traditionally the winger might. By doing this it allowed Malmö to have one eye on their attack as the attacking players were able to maintain a higher starting position which allows them to break quickly.

One negative of this is that sometimes, space can be left around the edge of the box. therefore, it is important that the other midfielder, who stays central, understands his role to cover this space. 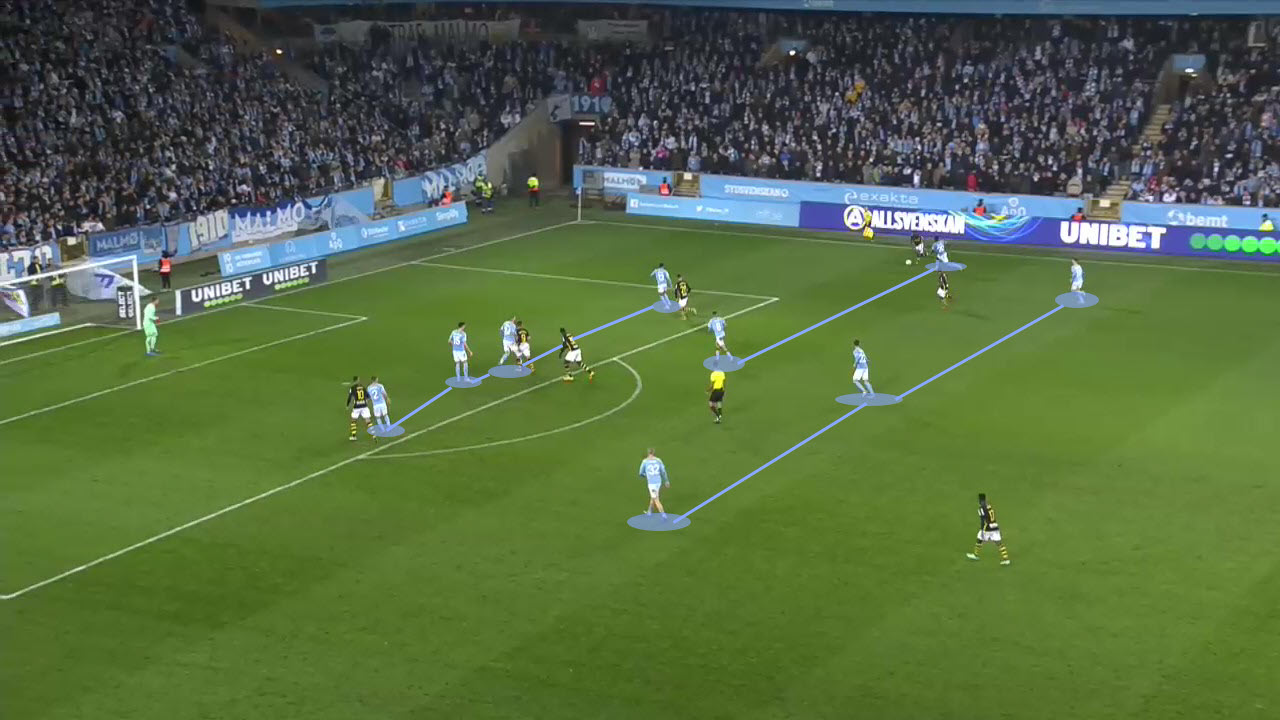 Once regained possession, Tomasson likes his side to break quickly and with meaning. When attacking, Malmö relies on their players to understand their surroundings. The example below is of the left-back making a run from deep in an attacking transition. Malmö look to play forwards quickly with passes rather than dribbling, The striker often positions himself in a dangerous area where he can run onto the ball or is in position for a shot.

Malmo leave their attacking players higher than most teams usually would. This gives them a great platform to build from and sometimes catches the opposition out with their numbers. 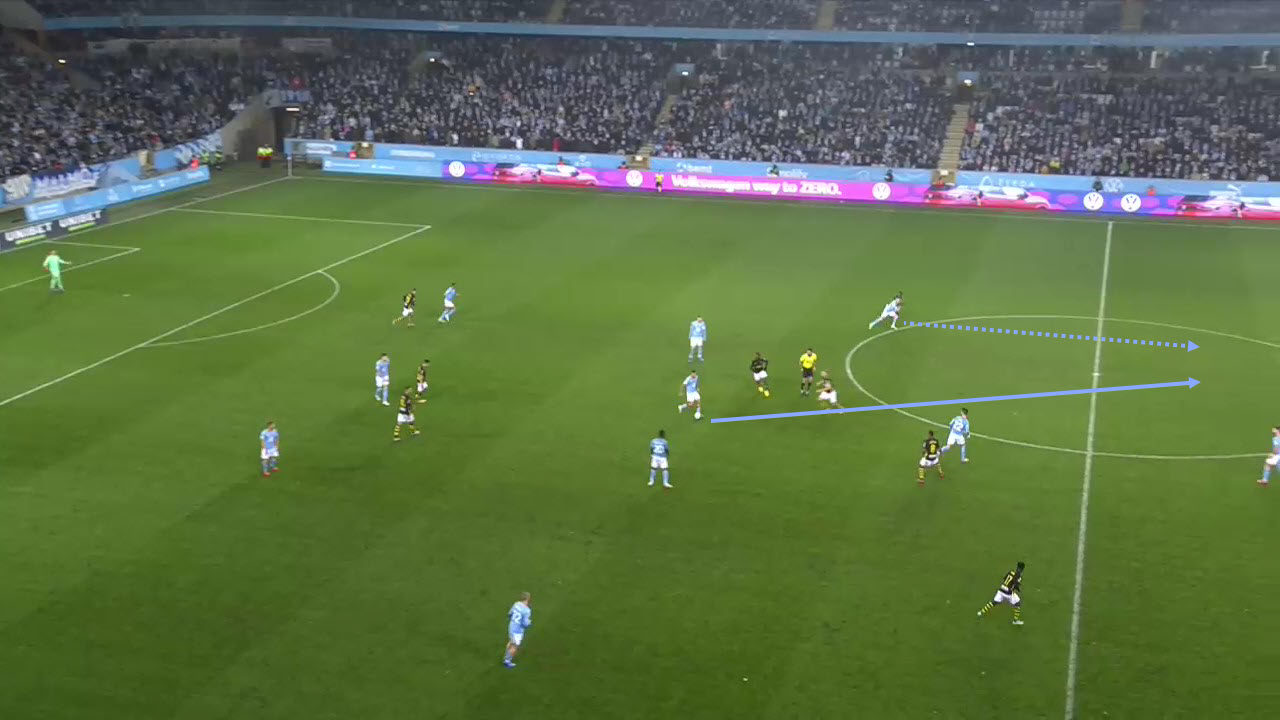 When Malmö have lost possession they do look to regain the ball quickly. This style is common in the modern game, however, Malmö operated slightly differently. When they look to counter-press, rather than the two or three nearest players joining in, it was just the nearest player.

By doing this Malmö were still able to disrupt the opposition and even win the ball back by forcing the opposition into a more condensed area of the pitch. This more conservative approach allowed Malmö to regain their defensive shape before they applied their more organised press. This way of transitioning is effective when high up the pitch and the likelihood of being outnumbered defensively is low. 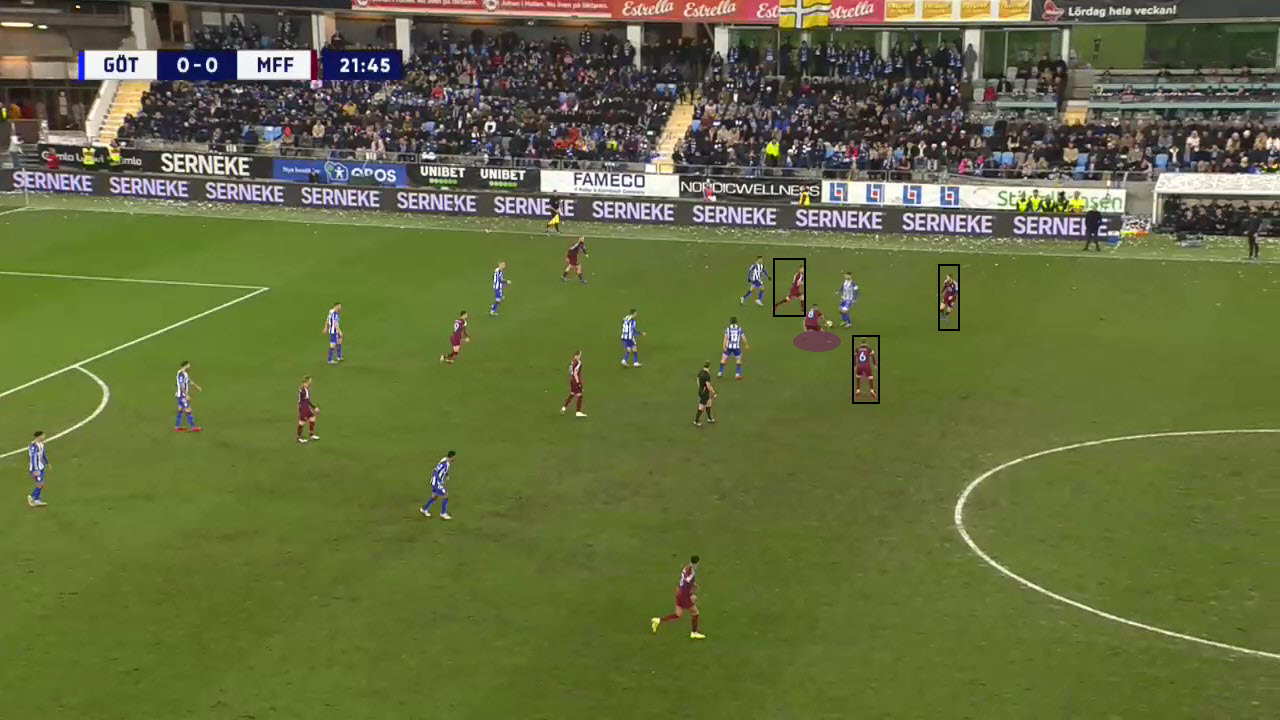 However, this way of transition can occasionally lead to dangerous situations defensively. Sometimes, when the pressure is not enough the opposition can play through the press and break quickly. When the midfield has been bypassed, it is a case of recovery.

Malmö are set in their way of defending against dangerous attacks and choose to do so by delaying and waiting for support. Doing this gives them the best chance of regaining possession or seeing the attack out. 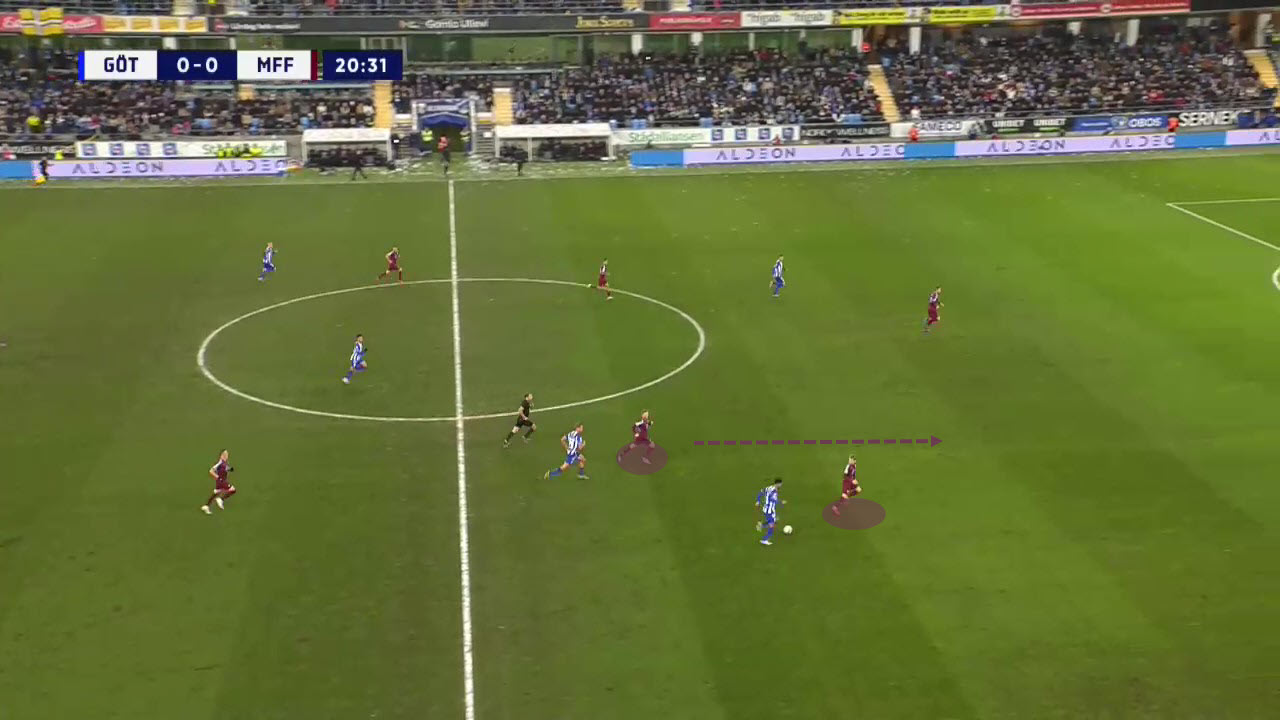 Overall, Jon Dahl Tomasson has a set philosophy of how he likes his team to play. He will require investment in key areas to ensure this is possible with his new team. When successful, Tomasson will likely make Blackburn one of the most competitive teams in the league. The ability to play forwards whilst also being defensively astute is what gets teams promoted and Tomasson is comfortable in taking risks in key areas to ensure results.

Blackburn fans can be excited following the club’s appointment of the Danish man who was competing in the 2021/22 UEFA Champions League group stages with Malmö, facing European giants Chelsea and Juventus. Blackburn have taken a different approach than usual and hopefully, it proves to be the correct one.