Since the Saudi Arabian takeover of Newcastle United, the club has been doing what it can to ensure survival in the Premier League. This started with the sacking of Steve Bruce and the hiring of Eddie Howe, which eventually lead to an upturn in form. Newcastle United then set about strengthening their squad in the January transfer window with the additions of Kieran Trippier, Chris Wood, Matt Targett, Bruno Guimaraes and Dan Burn. They have all brought something to help Newcastle in their bid for survival but arguably Dan Burn has been the most vital. He has played nine games for Magpies, winning five, drawing one and losing three. Plus, he has only conceded 10 goals at an average of 1.11 per game and of these 10 goals conceded, half came in one game against Tottenham Hotspur. Before Burn came into the backline Newcastle conceded an average of two goals per game. Now, this is not entirely down to Burn but his impact on the side cannot be understated.

This tactical analysis and scout report will take a deeper look at Burn’s key attributes and the impact he has made on Newcastle United since his arrival.

Addressing the data is now a key aspect of the player analysis and scouting process and will be discussed in this analysis of Dan Burn.  Now using data for evaluating Centre-backs is not an exact science and context is an imperative aspect that must be mentioned. For example, there are many attributes to a defender which cannot be quantified, think anticipation and reading of the game. Data isn’t the be-all and end-all, but it can help us understand the style of the defender, which will help us understand more about Dan Burn. 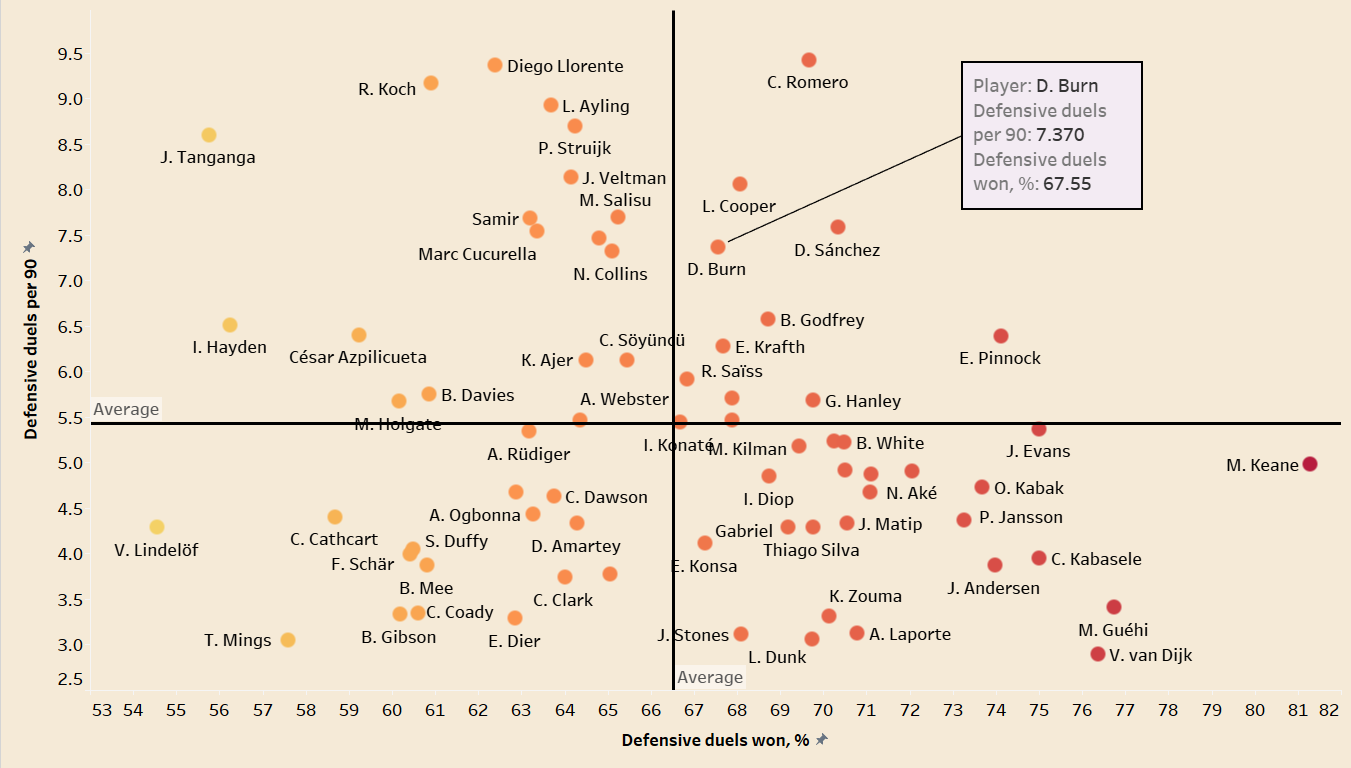 This shows Burn to be effective in his duels but also that he is an engaged defender. This can be reinforced by his aerial duels per 90 and aerial duel win %.  Now Dan Burn stands at around 6ft 7, so being strong in the air shouldn’t be a surprise but the data does confirm he is a dominant player in the air. 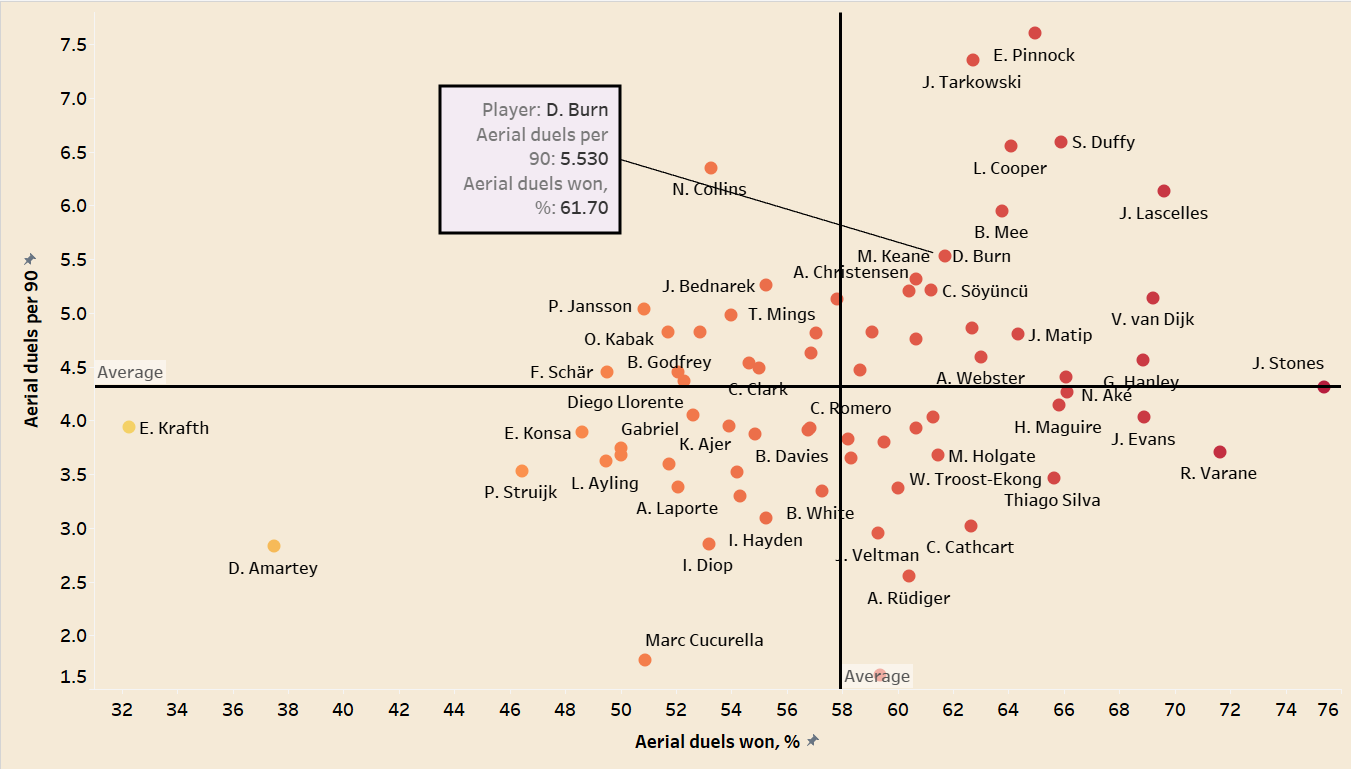 In addition to the duel metrics shown above, we can look at some possession adjusted metrics (PAdj), to remove the bias toward defenders of low possession teams. Below shows PAdj interceptions per 90 and PAdj slide tackles per 90.  Now, these metrics indicate the defensive style, more than the other metrics discussed, for example, Virgil Van Dijk, many would argue he is one of the best Centre-backs in the world. If you were to look at this graph you wouldn’t think so but what it really tells us is that Van Dijk’s qualities are hard to measure and that he is a passive defender avoiding tackles at all costs. Burn on the other hand is a very engaged defender, making lots of interceptions and tackles even when possession has been weighted out. 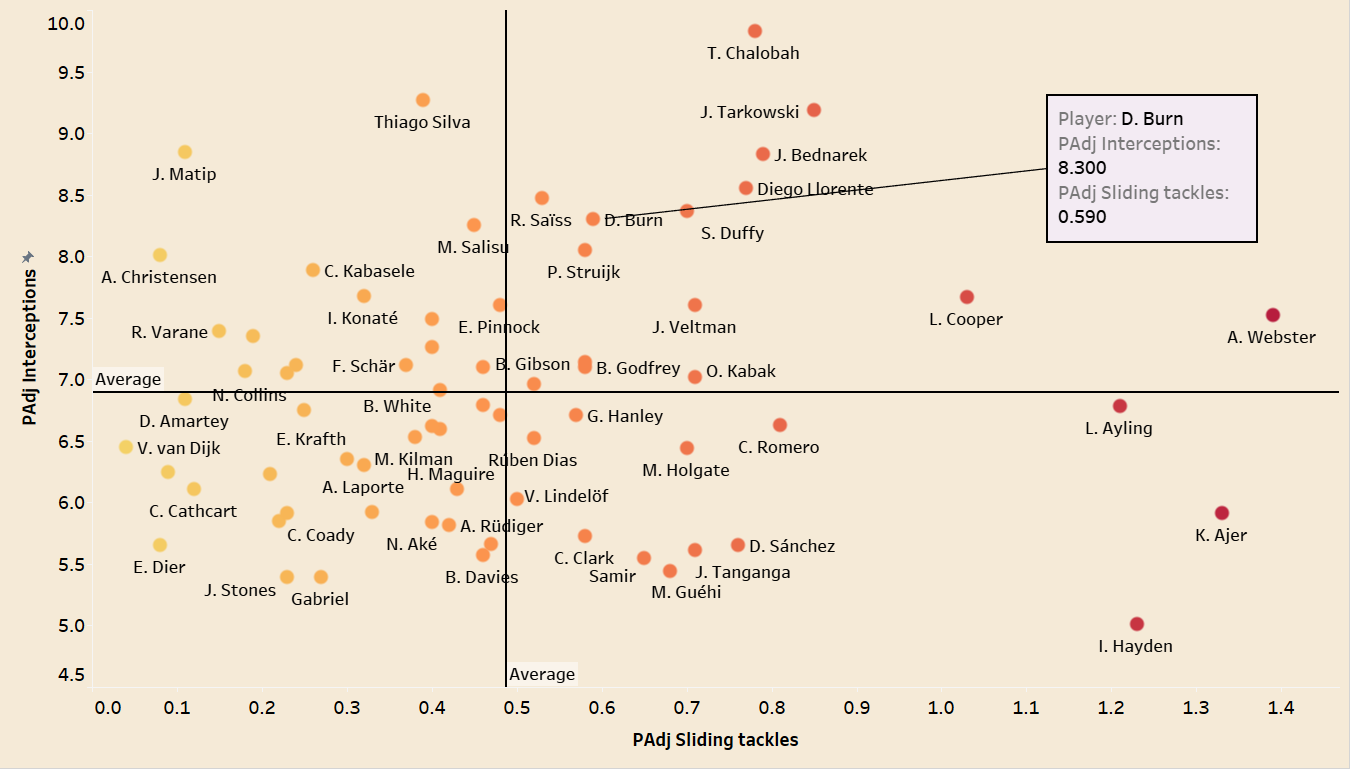 The final graph that can confirm Burn is an active defender, is successful defensive actions per 90. As you can see Burn is 4th amongst Premier League Centre-backs with over 750 minutes this season. 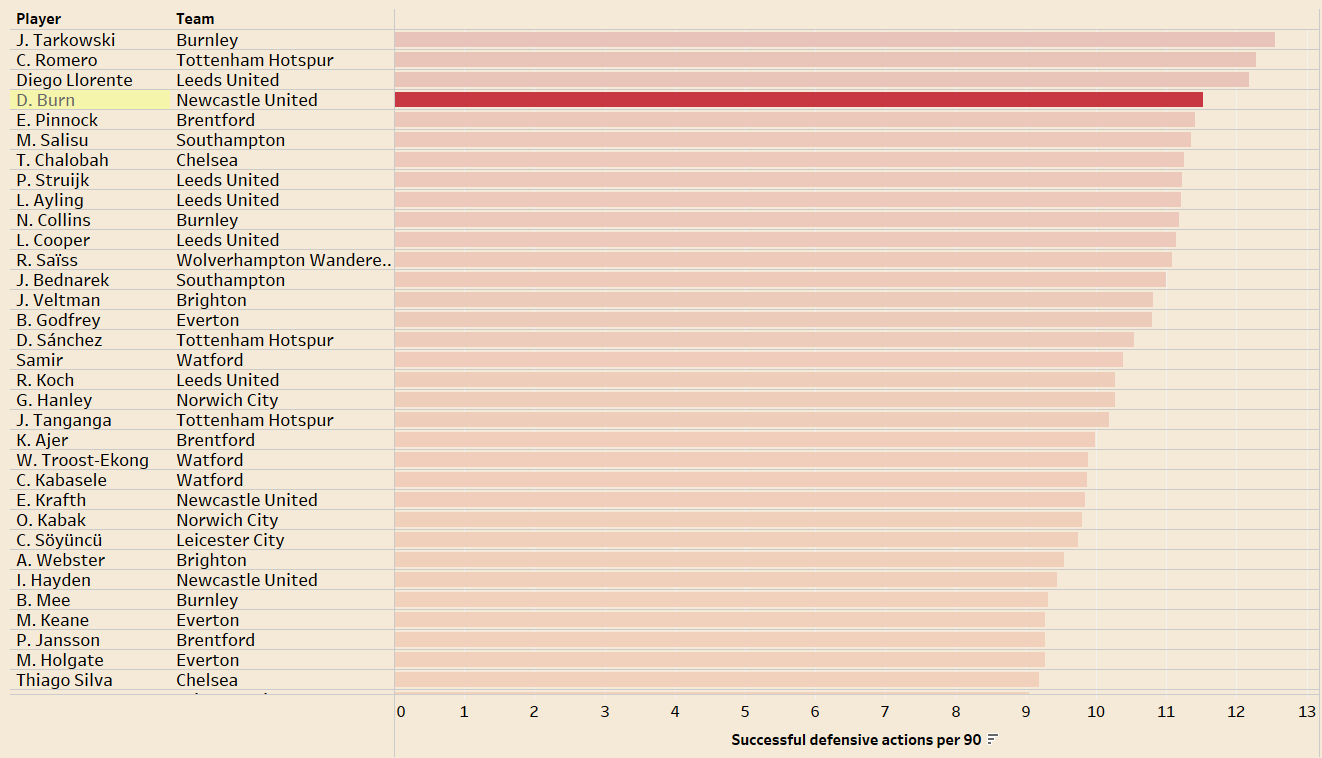 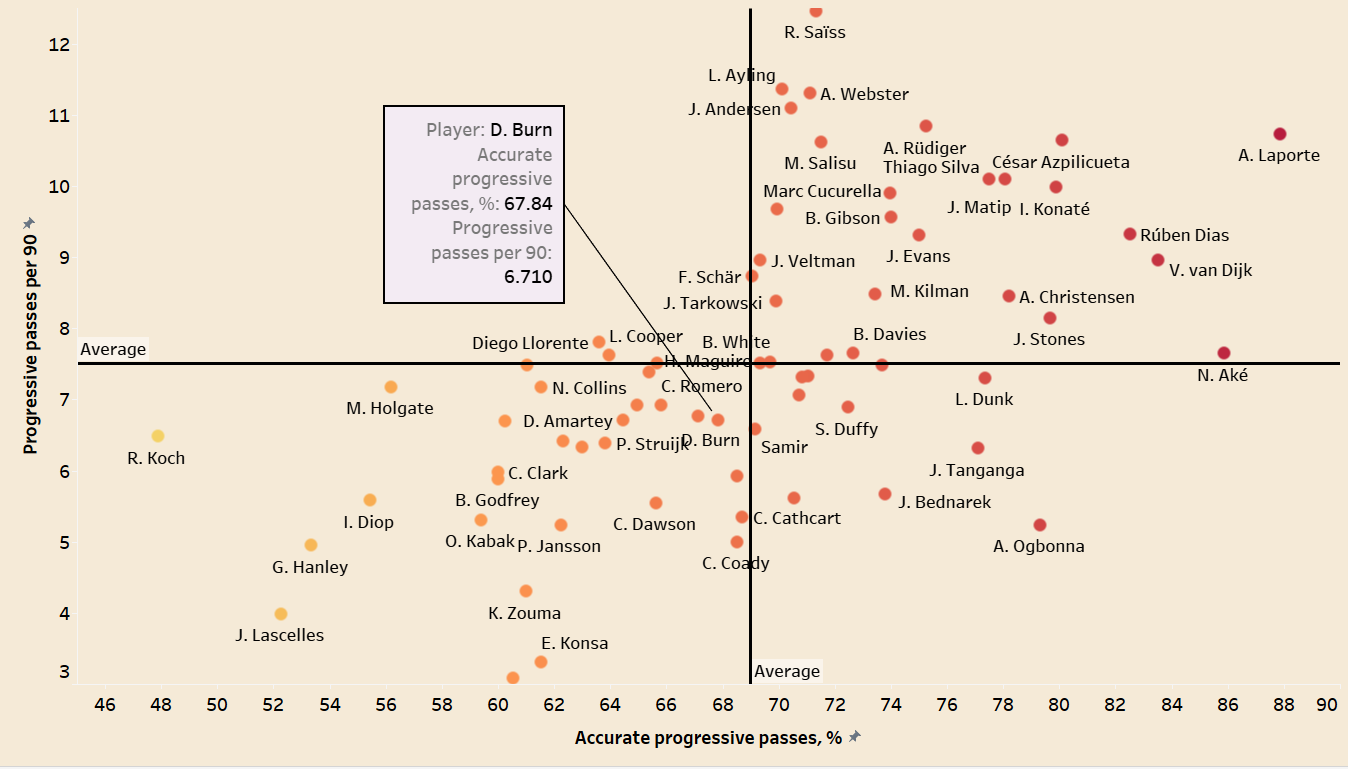 A progressive pass is a pass that significantly advances the ball closer to the opposition goal. Burn is below average in both the volume of these passes and the accuracy of these passes. Now they can both be influenced by team and style, as you can see the top performers happen to play for Manchester City and Liverpool, teams who dominate the ball creating more chances for these types of passes. Despite this Burn’s contribution is still not amazing, for example, someone like James Tarkowski plays for a low possession team and is more accurate and produces a higher number of progressive passes. Another set of metrics that will reinforce this is passes to the final third per 90 and accurate passes to the final third per 90. 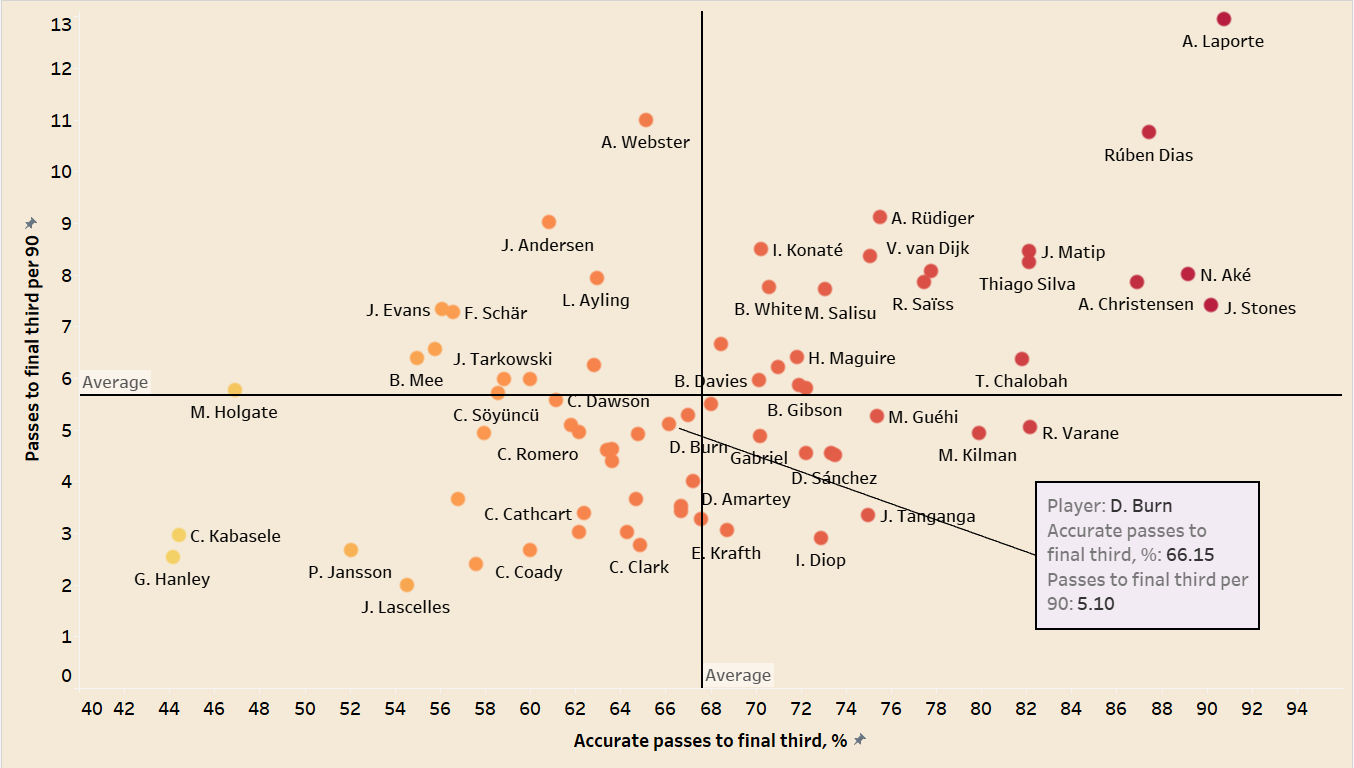 Again, Burns is below average in these two metrics.

From this data, we can start to understand the type of player Dan Burns is, he is a highly engaged defender seeking out duels and is a player who is good at winning these duels, arguably one of the best in the league. However, his contribution in possession isn’t brilliant but Newcastle don’t need him to be, they are seeking survival in the league and making sure they are defensively solid is their main priority.

Now we have already alluded to the fact that Burn is an active defender so far in this scout report, we will now try and show that in a real-life example. Burn loves to get tight to attackers, not allowing them to turn and using his frame and strength to impose himself on strikers. it is a high-risk high reward type of defending; it can lead to turnovers high up the field and eye-catching defensive moments but can be exploited by the quality strikers in the league.

This example comes from their recent game against Tottenham Hotspur, the ball is being played into Dejan Kulusevski. Now Burn has followed him all the way into his own half, as the ball is going to play into the highlighted space.

Burn is going to get as tight as he possibly can, pushing the line between being tight and committing a foul. By doing this he doesn’t allow Kulusevski to turn and manages to get his left foot around and stop his touch.

Burn uses his size perfectly here, to stop the pass into Kulusevski but to intimidate him and physically dominate him. Which could well have led to a dangerous turnover high up the field.

This type of defending can sometimes create holes in the defensive line and be exposed if the attacker can hold him off and use quick touches but for the most part, it is effective for Dan Burn.

With Burn being an active defender this leads to him regularly making tackles and defensive actions to nullify the opposition attack. Burn also utilises his size and frame when making tackles, which can also make him deceptively effective in a 1 v 1 situation. Burn does have a history of playing as a wing-back and as an outside centre-back in a back three so he is comfortable defending in wider areas. Below shows one of Burn’s well-timed challenges against West Ham. A ball has been played into wide space for Antonio to run onto by his teammate Benrahma.  This could potentially expose Burn as the ball is played behind into space for one of the quickest strikers in the league.

However, Burn anticipates this and has already started looking to cut this out. He manages to effectively get to the ball and make a well-timed challenge shutting down the attack.

This example shows that Burn is deceptively quicker than may be expected when you see his height but also that he can use his size to his advantage, using his frame to get to the ball before Antonio.

The next example again shows how Burn is comfortable in 1 v 1 situations but also his engaged style of defending. Southampton is on the attack and Newcastle is sitting in their tactical low block.

Che Adams is playing a pass between the lines into the highlighted space. Now Burn is going to get tight and prevent Broja from turning. Burn looks to get his hands on Broja and again assert his physical dominance on the Southampton striker. By doing this Broja cant turn but also applies pressure on him physically forcing a potential mistake.

As Broja looks to carry the ball, Burn gets even tighter and looks to nullify the Southampton attack. Similar to the earlier example against Tottenham he uses his frame to lunge around Broja and make an effective tackle.

Leading to a turnover and stopping the Southampton attack.  This shows us that Burn is comfortable isolating himself 1 v 1 but also his engaged style and how he likes to get physical with opposition players.

Dan Burn’s impact on Newcastle is significant, he has provided defensive solidity and physicality to the side.  The way Burn defenders is a little bit old school, wanting to get tight to attackers and using his physique to his advantage. He is a defender who thrives on physical encounters and seeks them out with his tight and aggressive marking, which plays to his strengths as a defender. Burn has and will play a vital role in Newcastle United’s bid for survival in the Premier League.