For Wolves their first season under new manager Bruno Lage has been a successful one, currently sat 8th in the league and two points behind Manchester United and West Ham United. This Wolves team has a heavy Portuguese influence, as has been the case in recent years with the club’s links to Portuguese super-agent Jorge Mendes. The list of Portuguese players who have played for Wolves is an impressive one including; Diogo Jota, Rui Patricio, Ruben Neves and Joao Moutinho. One of these Portuguese players, who so far this season has been an important part of their success, is Daniel Podence.

Podence’s season so far has been an underrated one and his creative qualities have shone through making him one of the most creative players in the league, without maybe receiving the plaudits he deserves.

This scout report and tactical analysis will take a look into why Podence is of the league’s best creators and the vital role he has played for Wolves this season.

Podence operates as an inside forward or winger the majority of the time, with the ability to occupy different roles across the front line. He can play wide as a traditional winger but is also comfortable playing much narrower, depending on the formation Wolves are playing. This can be seen from the heatmap shown below, showing the majority of his play in the final third and covering both sides of the pitch. 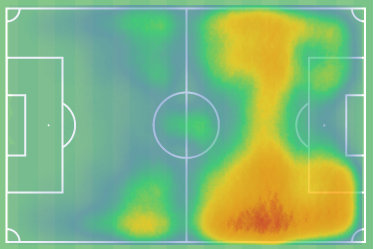 Wolves often utilize a tactical back three playing either a 3-4-3 or 3-4-2-1 this season under Bruno Lage, confirmed below. In these tactics, Podence often operates on either side of the striker.

Podence was a player who grabbed my attention when addressing some of the data metrics for attackers in the Premier League, he consistently appeared in some key metrics. So far this season he has been a top performer in some of the important metrics used when assessing a player’s creative contribution, which we will delve into further in this data analysis section.

The below graph shows Podence’s assists per 90 and expected assists per 90 and shows him to be in the above-average section for attackers and wingers this season with over 1000 minutes played. He has recorded an impressive XA per 90 of 0.22, which is one of the highest in the league. However, his assists per 90 haven’t correlated to the chances he’s created, predominantly down to poor finishing by teammates. This helps lead to Podence going somewhat underrated this season. 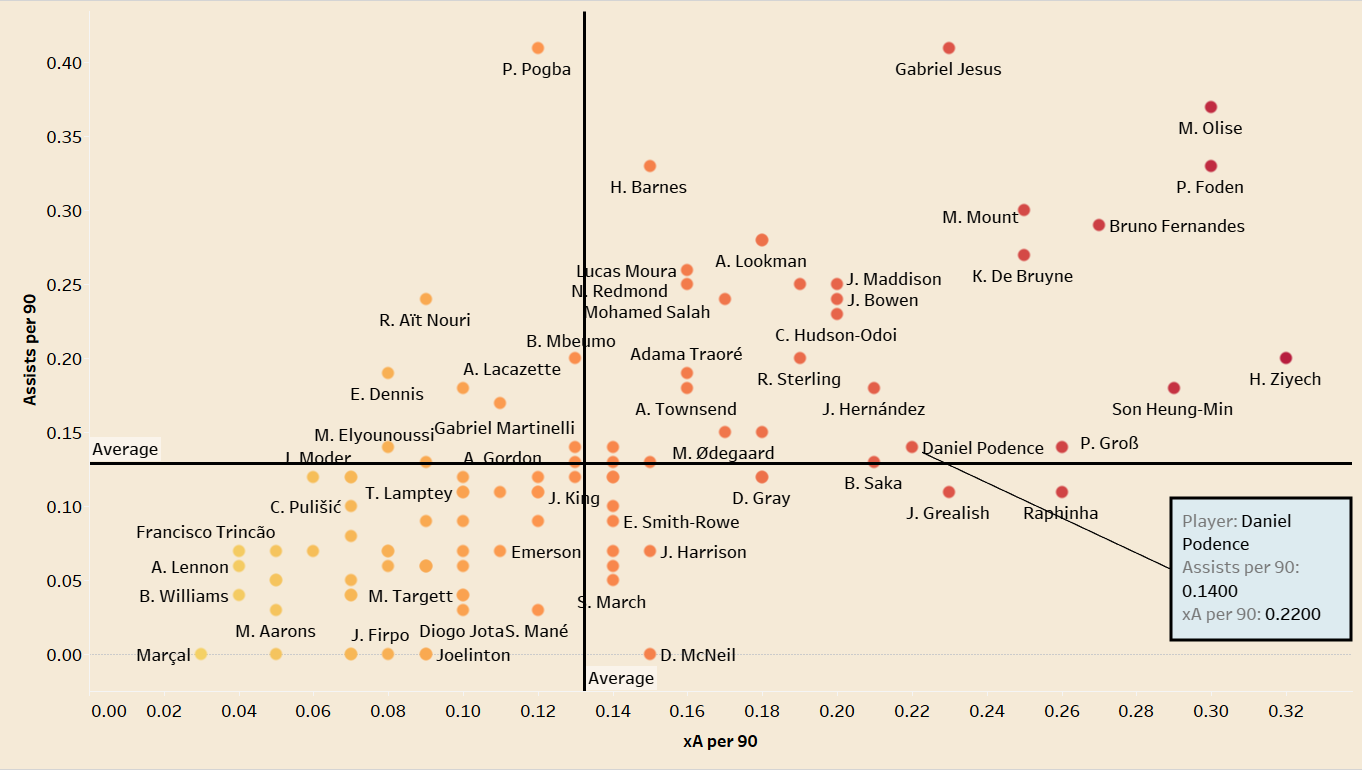 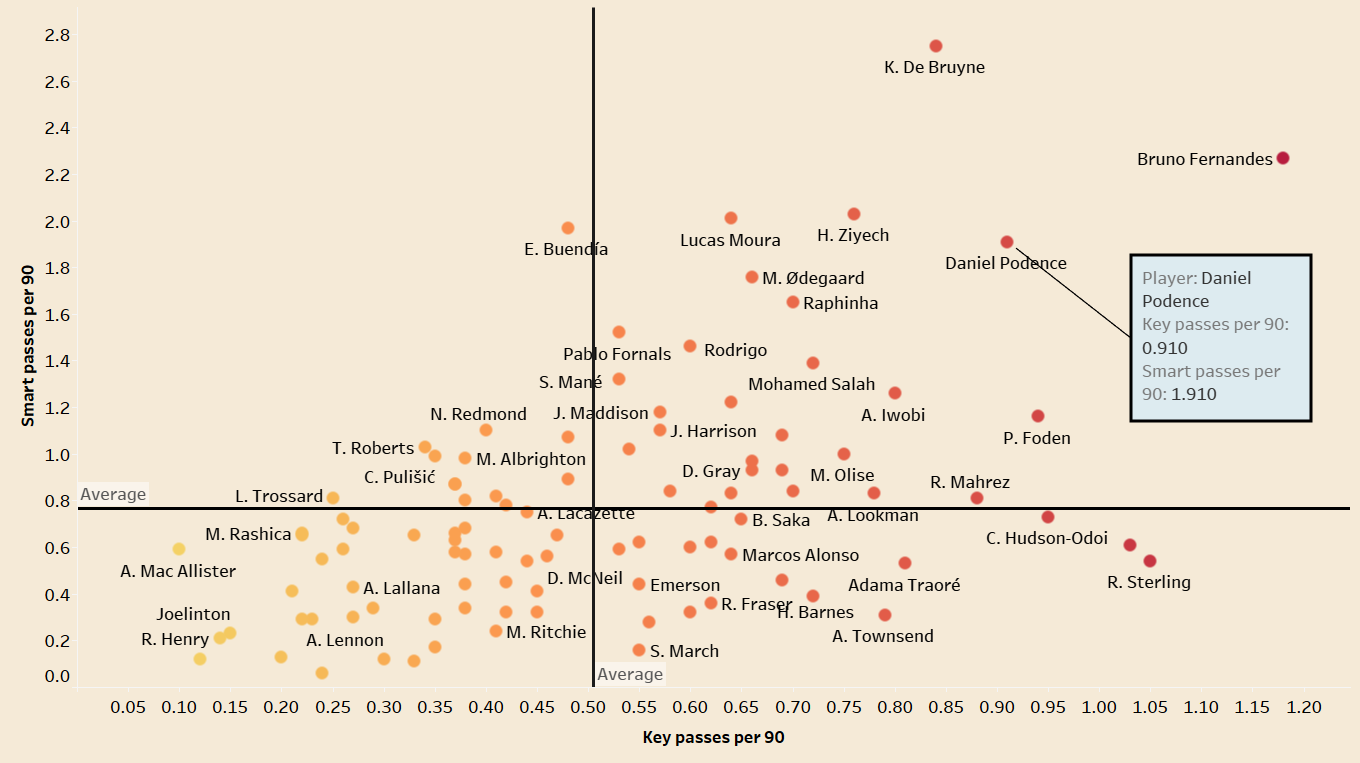 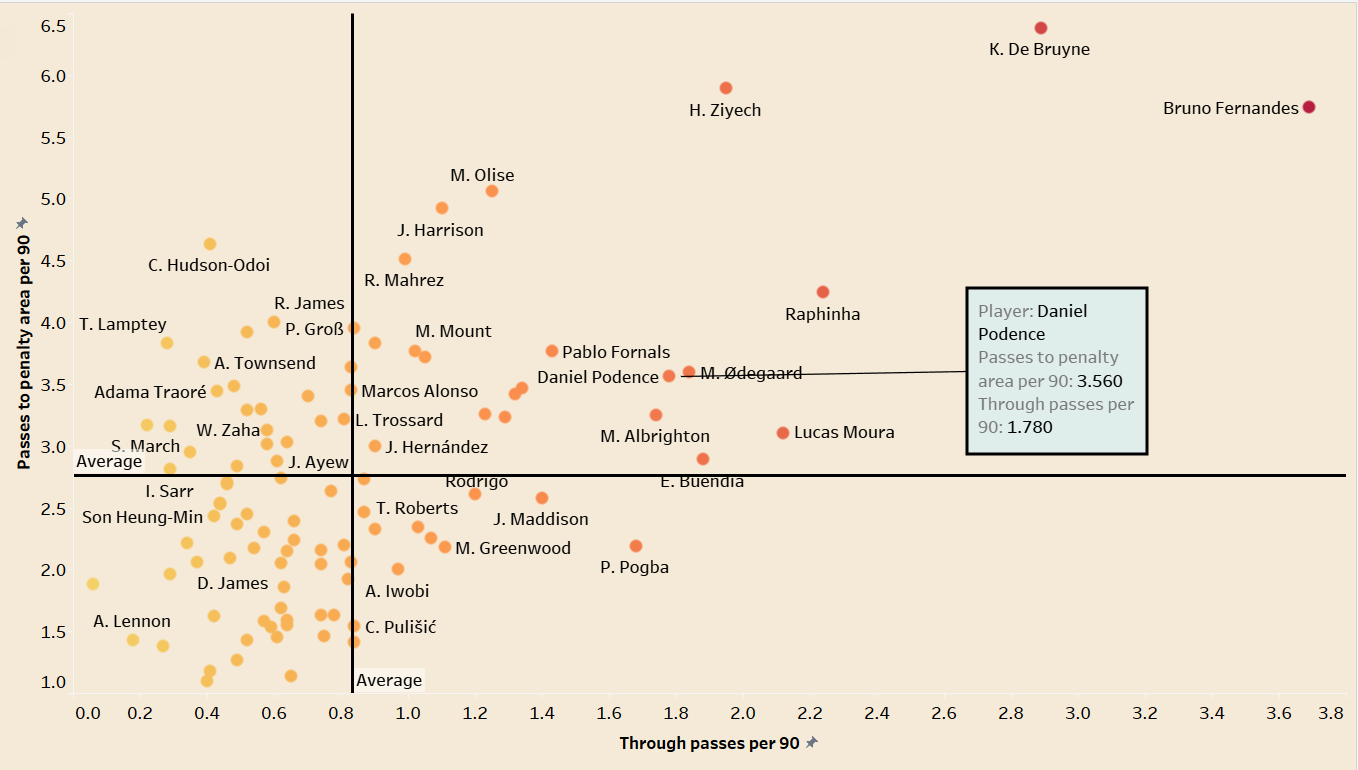 Again, there are very few players in these metrics who outperform Podence. The contribution Podence makes to Wolves in their build-up play cannot be understated and another facet of Podence’s play that he stands out in is his ball progression. Podence is both a strong progressive passer and progressive carrier, and very few players do both of these well, as shown by the below graph. 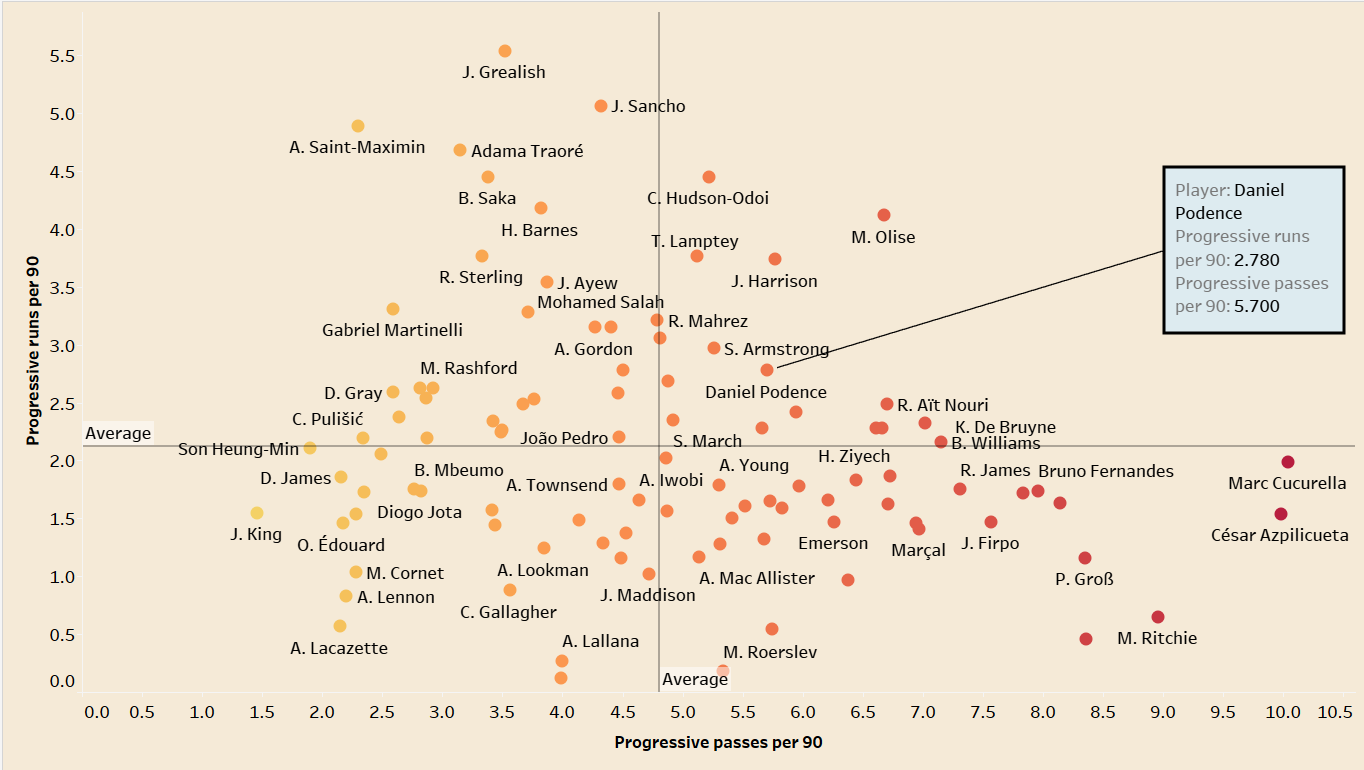 For an attacker, Podence makes a high number of progressive passes per 90, 5.7 and progressive runs 2.7. This allows Podence to contribute to Wolves build-up play and again be instrumental in Wolves attacking phases.

Hopefully, this data has demonstrated that Podence is one of the most impactful attackers in the Premier League, consistently creating chances for Wolves plus contributing to their all-around attacking play.  This can be confirmed by looking at the successful attacking actions per 90 graph below. 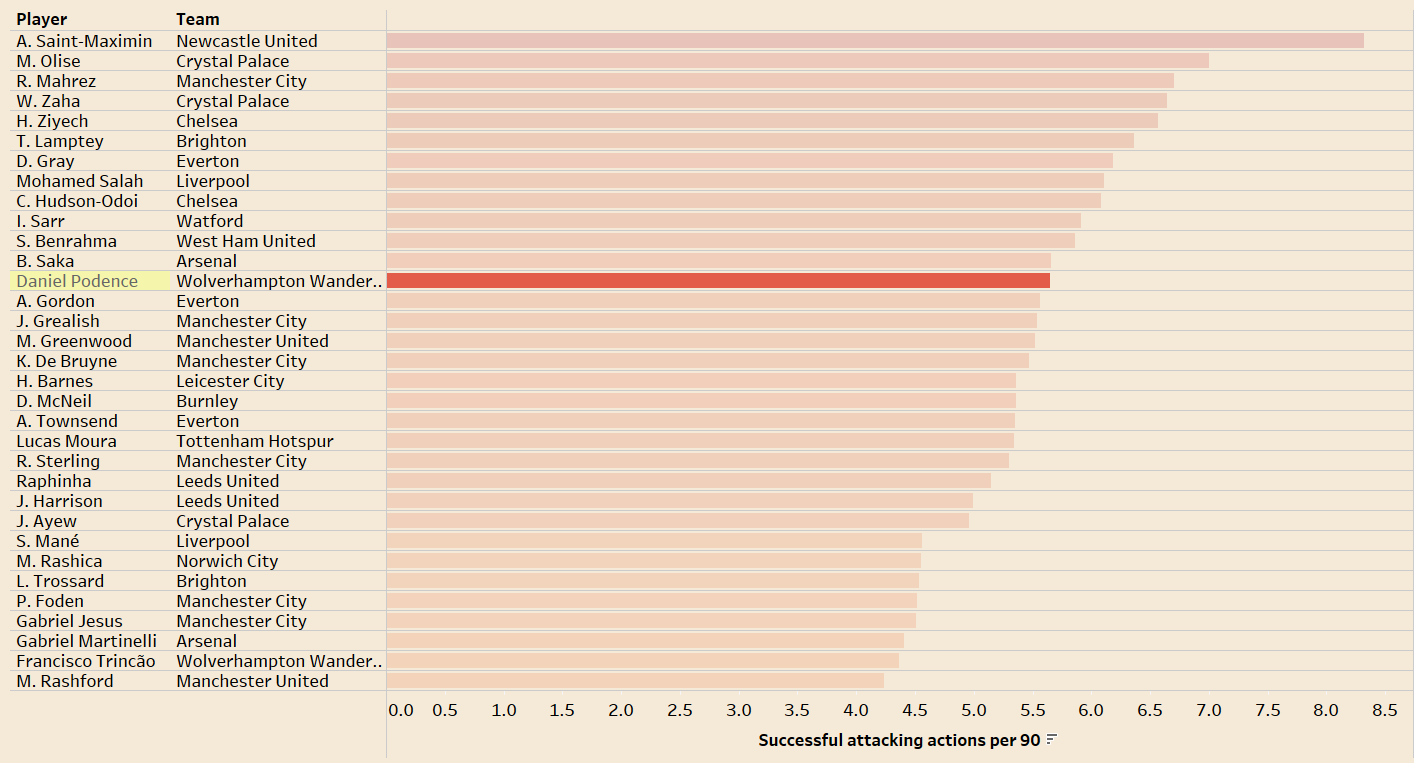 As already established in the data section of this analysis, Podence is a good passer of the ball, especially when it involves creating chances for teammates and making the final pass for his team. Below we will look at an example of Podence’s passing quality to create chances for his teammates.

In this first example against Arsenal, Podence has dropped a bit deeper, to get between the lines before receiving a pass from the Wolves’ centre-back. As can be seen below.

Now the space between the lines is exaggerated, this is due to Arsenal looking to press Wolves high but this type of movement and positioning is a key facet of Podence’s game.

After receiving the ball, Podence carries the ball forward. Constantly keeping his head up and scanning for potential runners.  He eventually pulls the trigger releasing a pass for Jimenez. The pass manages to beat Partey plus evade Arsenal centre-backs White and Gabriel.

Podence manages to get the ball into the path of Jimenez who has a touch before dragging the ball wide with his shot. The combination of his positioning then well-weighted and timed pass perfectly encapsulates his quality.

I briefly touched upon the role Podence plays in the wider Wolves attacking play earlier, but his contribution is significant. Wolves usually play a two-man midfield as seen in their most-used formations. This means that in order to create a midfield overload, someone needs to drop in and provide this extra man, this is often Podence. The below examples show how Podence’s role in the build-up play is vital to Wolves.

Here you can see Wolves build-up against Leeds United, it shows the three Wolves centre-backs spread out and Neves dropping deep to provide an option. You can also see Podence emerge from deep to receive the ball from Jose Sa. 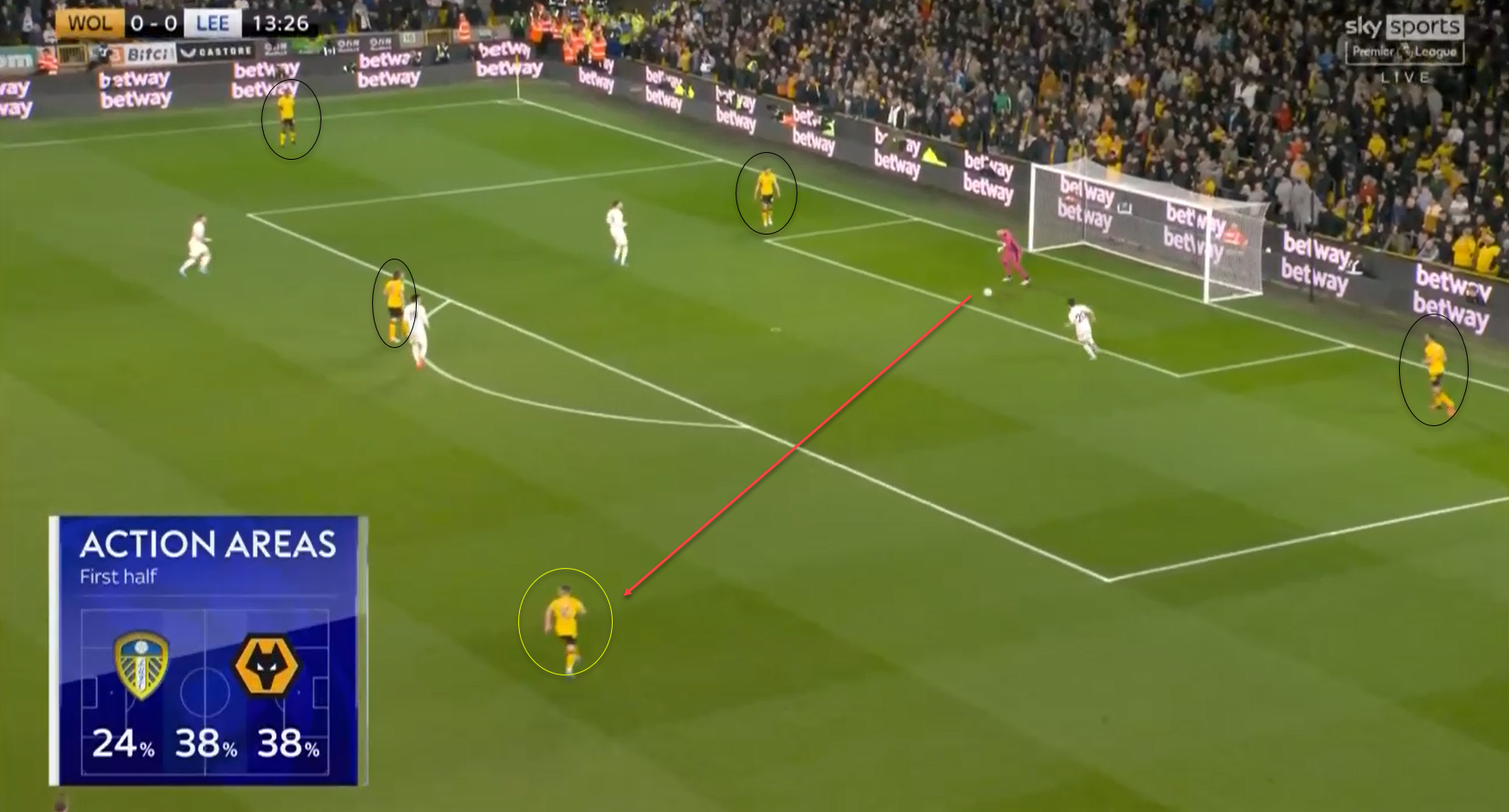 This gives Wolves another passing option when building from the back and an easy progression. After receiving the ball Podence turns and drives forward, carrying the ball to just short of the halfway line.

He then plays the ball inside into Moutinho, who then switches the ball out to the right side.

The next example again, shows Podence dropping deep to receive the ball and create an overload in the deeper phase of the attack. This time it’s against Watford but the principles are the same. Podence has received the ball of Boly, the right-sided Centre-back out of the picture. Before playing a one-touch pass to right wing-back Jonny. 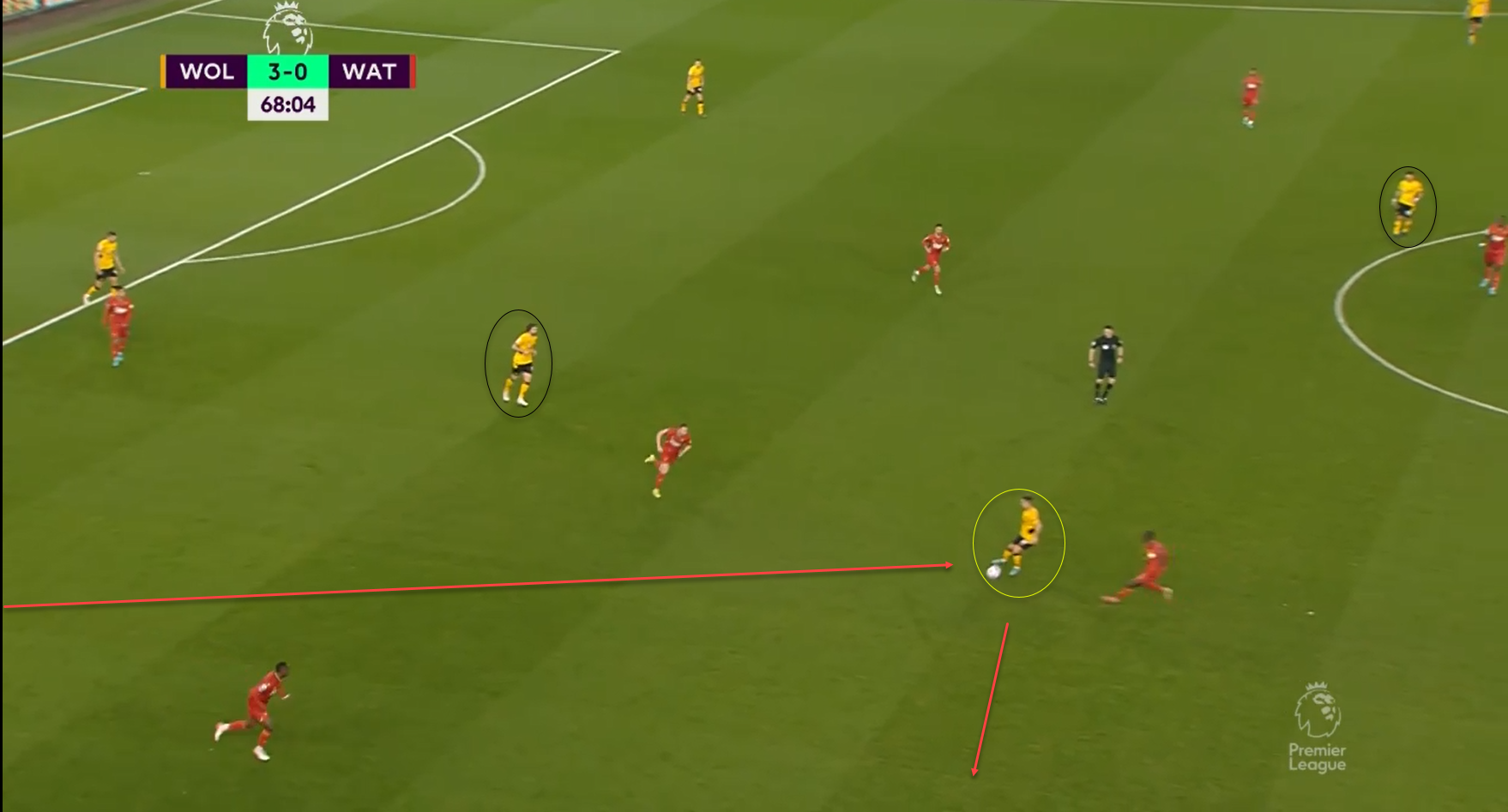 Again, you can see how by doing this Podence has created an extra body in midfield allowing Wolves to maintain their balance and allowing them to progress the ball up the field. 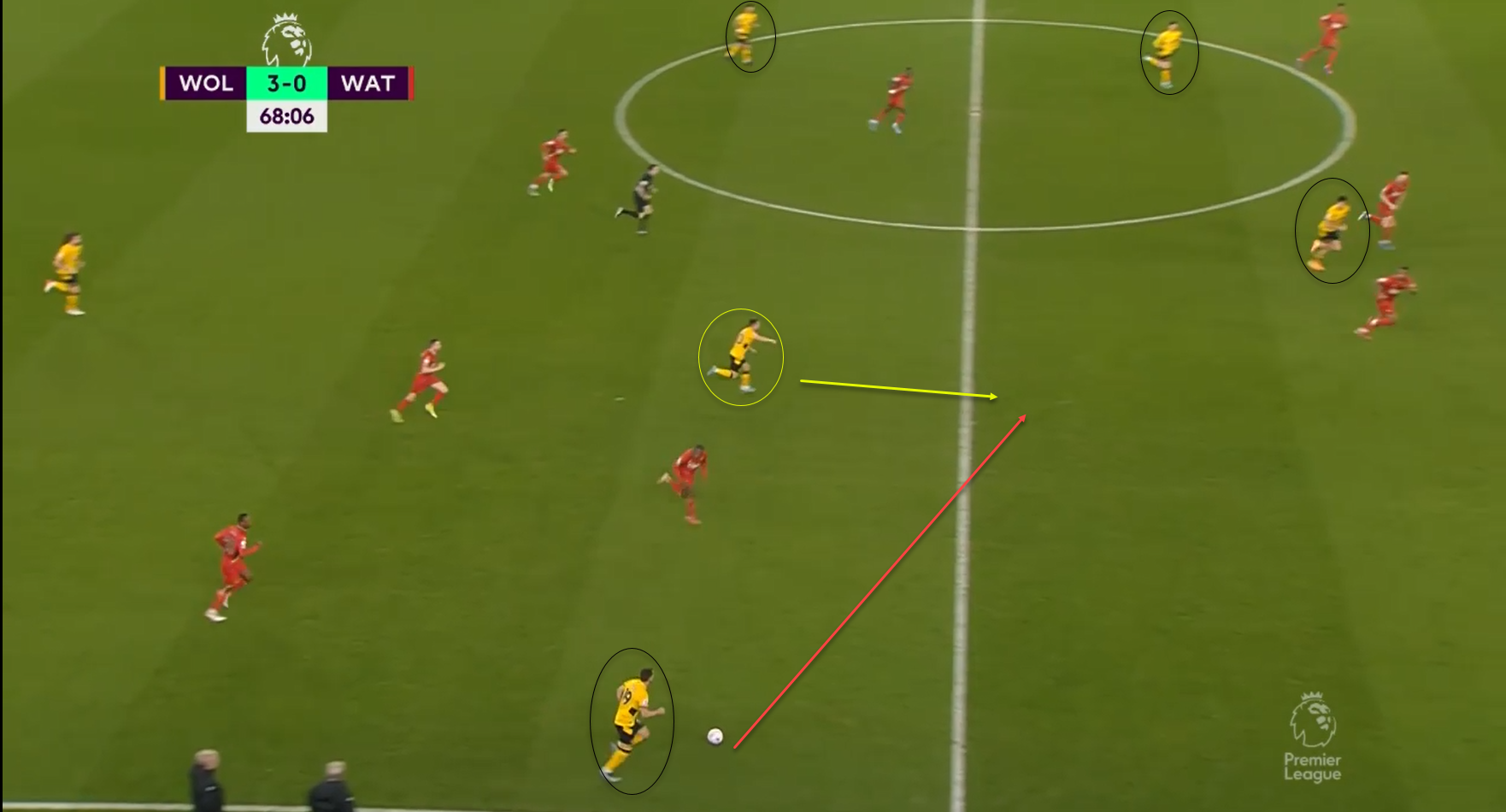 He then receives the ball back before carrying it deep into the Watford half and creating an attacking opportunity.

The ability for Podence to drop deep and link the build-up play cannot be downplayed; he is an integral part of their build-up phases. One of the reasons he is asked to do this ball carrying and progression which we will discuss now.

Podence stands at around 5ft 4, so he is only a small player, however, this allows him to carry the ball effectively. He glides over the surface and has great acceleration and pace over a short distance. His average carry distance is one of the highest in the league at 12.65 meters per carry, showing he has the ability to carry the ball over significant distances.  So far in this scout report, his ability to carry the ball has been touched upon but the following examples show it in more depth.

Here shows Podence, gathering the ball after Southampton have just lost possession, now the fact James Ward-Prowse decided to appeal before shutting Podence down, does help him get out of the tight space but Podence’s acceleration is impressive and would have lost Ward-Prowse anyway. 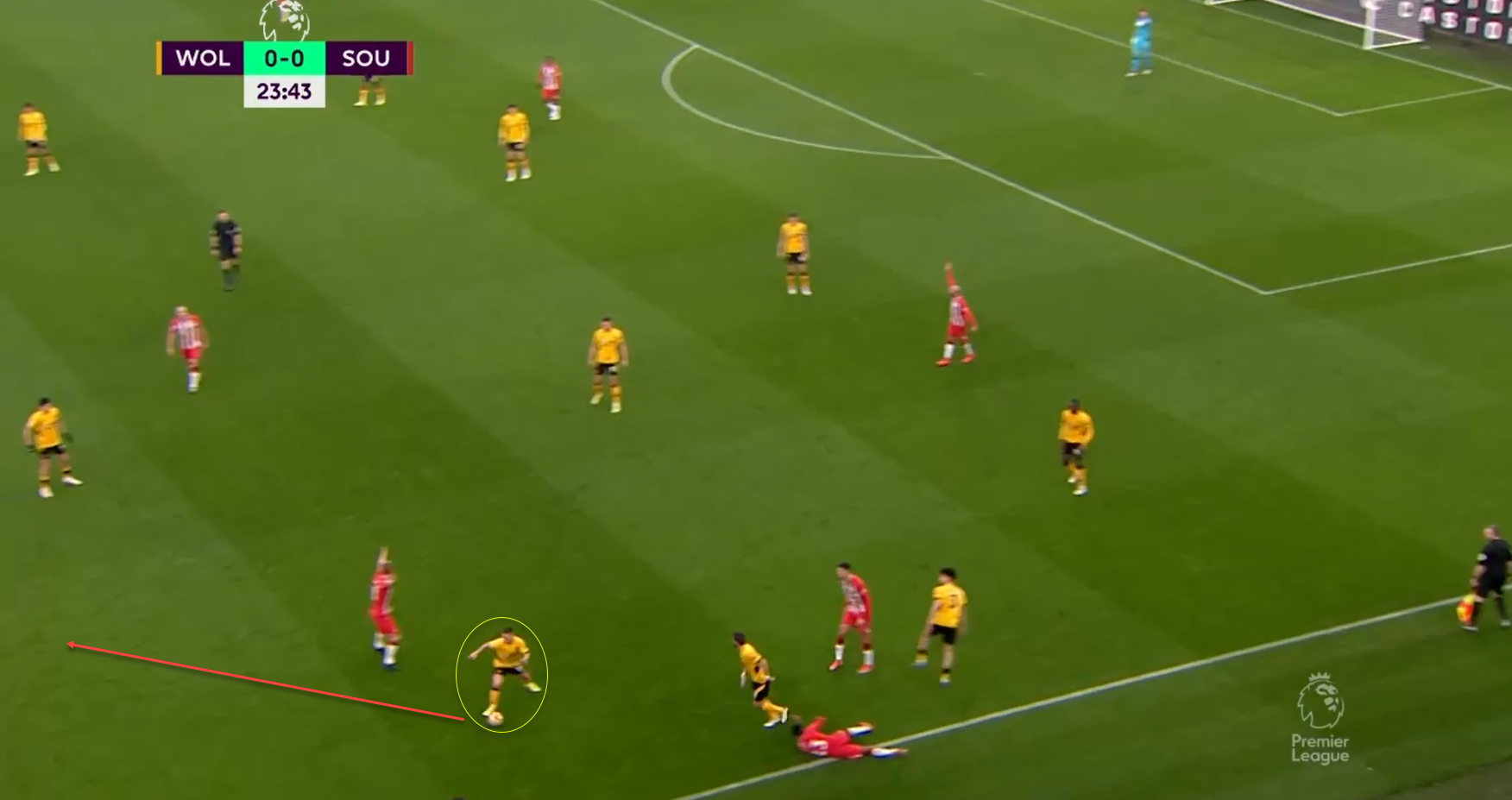 Now that Podence has managed to escape the tight space and enter the Southampton half, he decides to come inside, which is smart as it allows him to bring in other players.

He elegantly glides past Bednarek before playing the ball out wide for Wolves to continue their attack.  He has also created a 3 v 3 situation for Wolves, this is due to his ability to carry the ball quickly after the point of turnover and prevent any counter-press. 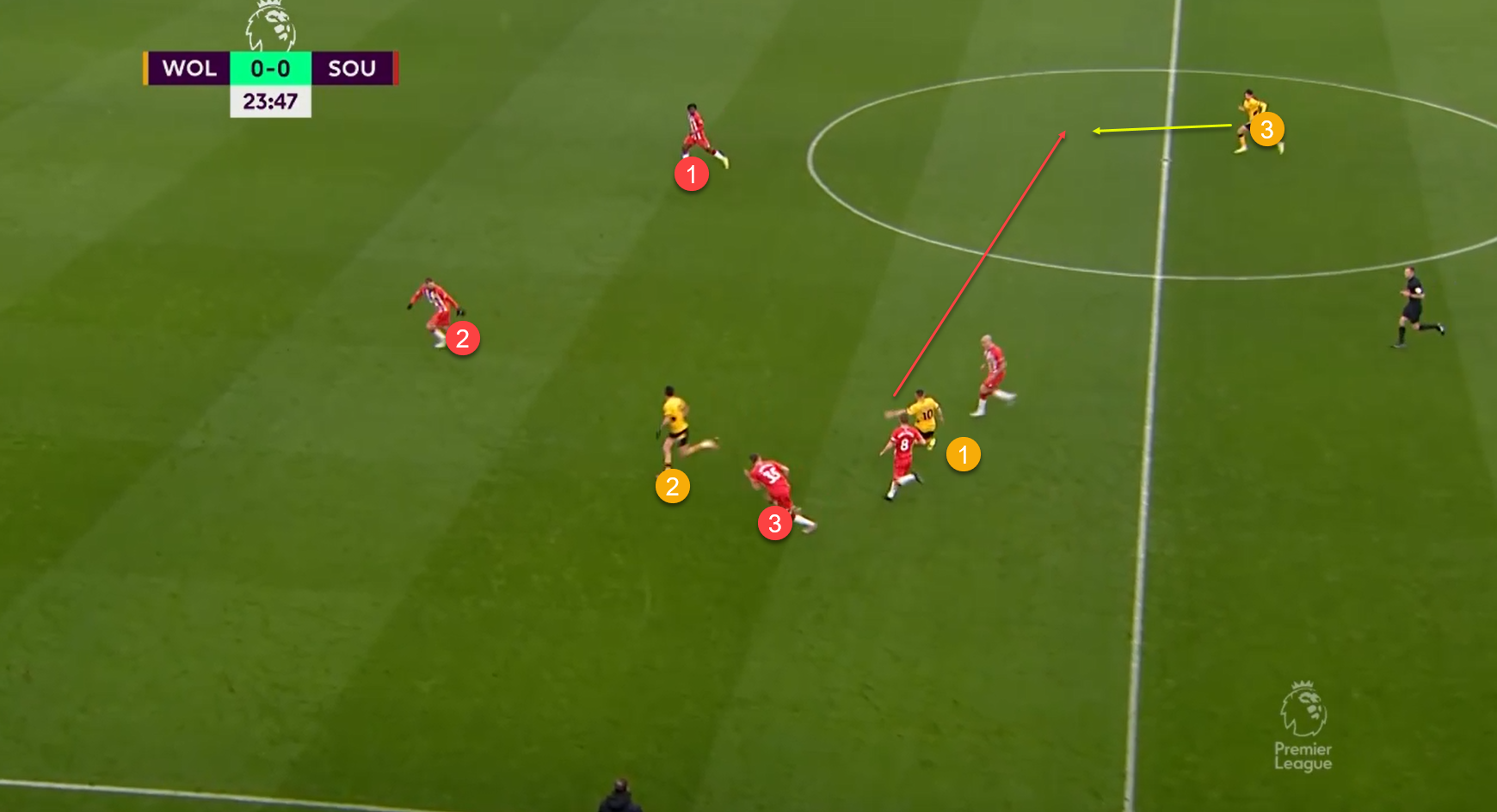 His ball carrying ability makes Podence effective in transition, as he can move the ball quickly and bypasses opposition counter-presses as shown here.

Hopefully, this scout report and tactical analysis have given you a better understanding of Daniel Podence and the type of player he is. In addition to the importance, he plays in the Wolves attacking play and transition phases. His ability to both pass and carry the ball makes him a dual threat in attack. He also maximizes these attributes by contributing to the deeper phases of Wolves attacks to play a vital part in their overall attacking play.