Lovro Majer made a name for himself in his homeland with Dinamo Zagreb, where he established himself as one of the best players in the league. Like many players who emerge from outside the European mainstream leagues, he faced the question of whether he is good enough for the top five leagues. This is part of a wider debate in football recruitment and how do you assess a player coming from a much weaker league like the 1. HNL. Usually, it results in the player moving to a club outside of Europe’s elite, in this case, Rennes.  Majer has answered those questions this season with an excellent season in Ligue 1 with Rennes, a side that has been impressive this season.  Majer is now a player who is starting to be rumoured and linked with Europe’s elite with names such as Real Madrid, Liverpool and Inter Milan all being linked with the Croatian midfielder.

This scout report and tactical analysis will take a look into Lovro Majer’s game and assess whether he is ready for the step up into the European elite and identify any areas he may need to improve on to achieve this.

Majer is an attacking midfielder who usually operates as a number 8 but is able to operate as a number 10, due to his attacking quality and the positions he likes to occupy. So far this season Rennes have used numerous formations, and this has led to Majer occupying different positions and roles, which haven’t always suited Majer, which has led to him sometimes spending time on the bench. In recent games, Majer has played on the right of a midfield three, part of a tactical 4-3-3. This seems to be the preferred formation and role for Majer. When in this role Majer likes to drift wider into the right half-spaces, similar to a mezzala. This is reinforced below, showing that the majority of Majer’s time is spent in the right half-space. 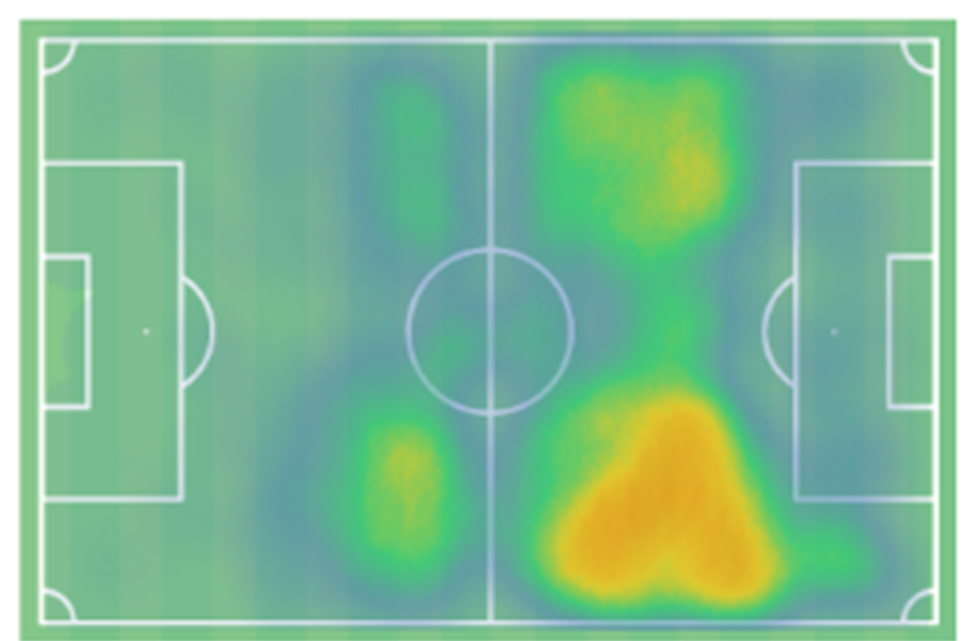 Data can play a significant role in identifying talent in the modern recruitment process. It is also how I often start my scouting process, as it gives you an instant understanding of the players’ skills and attributes and how they compare to teammates and other players in their league. This is also the first part of this scout report, taking a look at some important metrics and how Majer performs in these metrics.

Firstly, Majer is a creative player whose best work comes in possession. This leads us to start the data analysis by looking at Majer assists per 90 and expected assists per 90 (XA per 90).  These are two metrics that Majer performs excellently well in. Majer manages to produce 0.38 assists per 90, which is only bettered by the one and only Lionel Messi. His XA per 90 (a more accurate measure of a player’s chance creating abilities) is 0.25 which is 4th in Ligue 1 this season amongst midfielders. 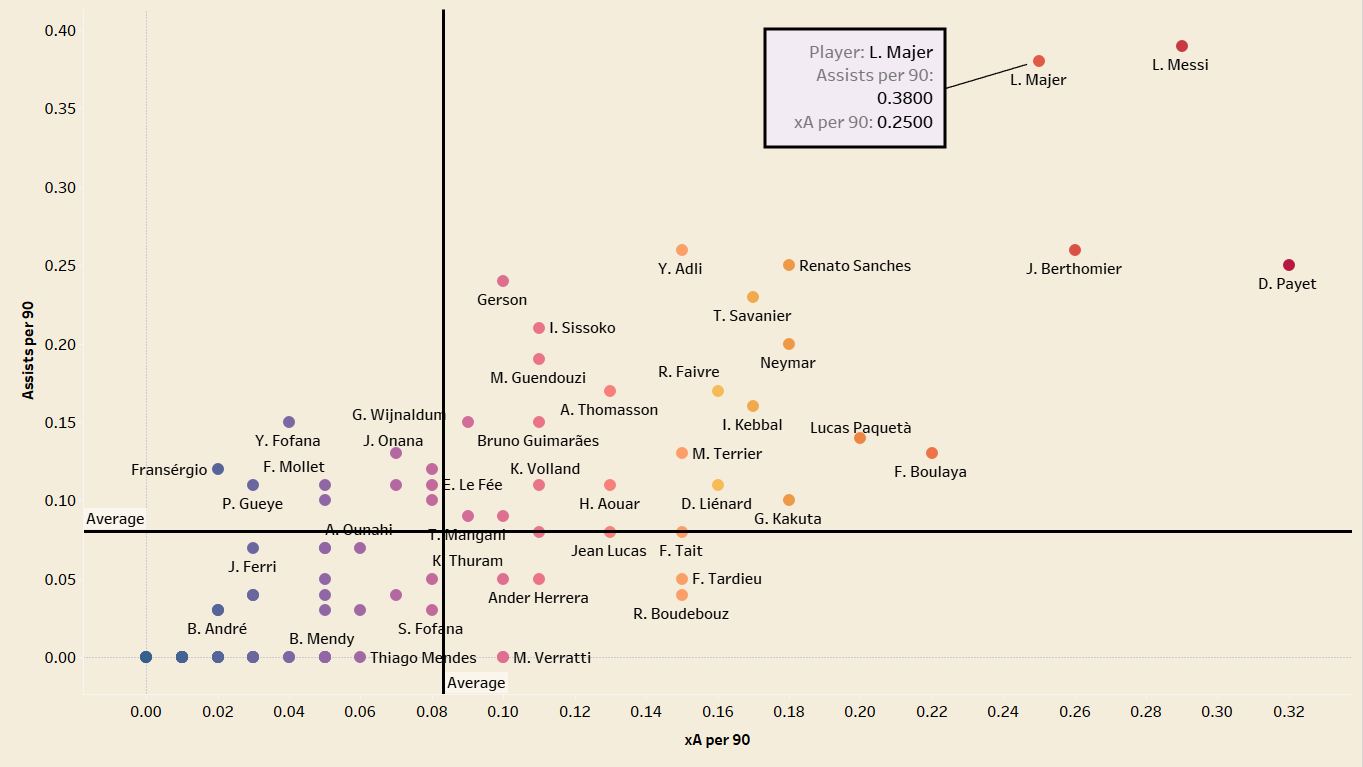 Although he is outperforming his XA, even if he experiences regression back to XA per 90 this would still be one the best outputs in the league and significantly above average. 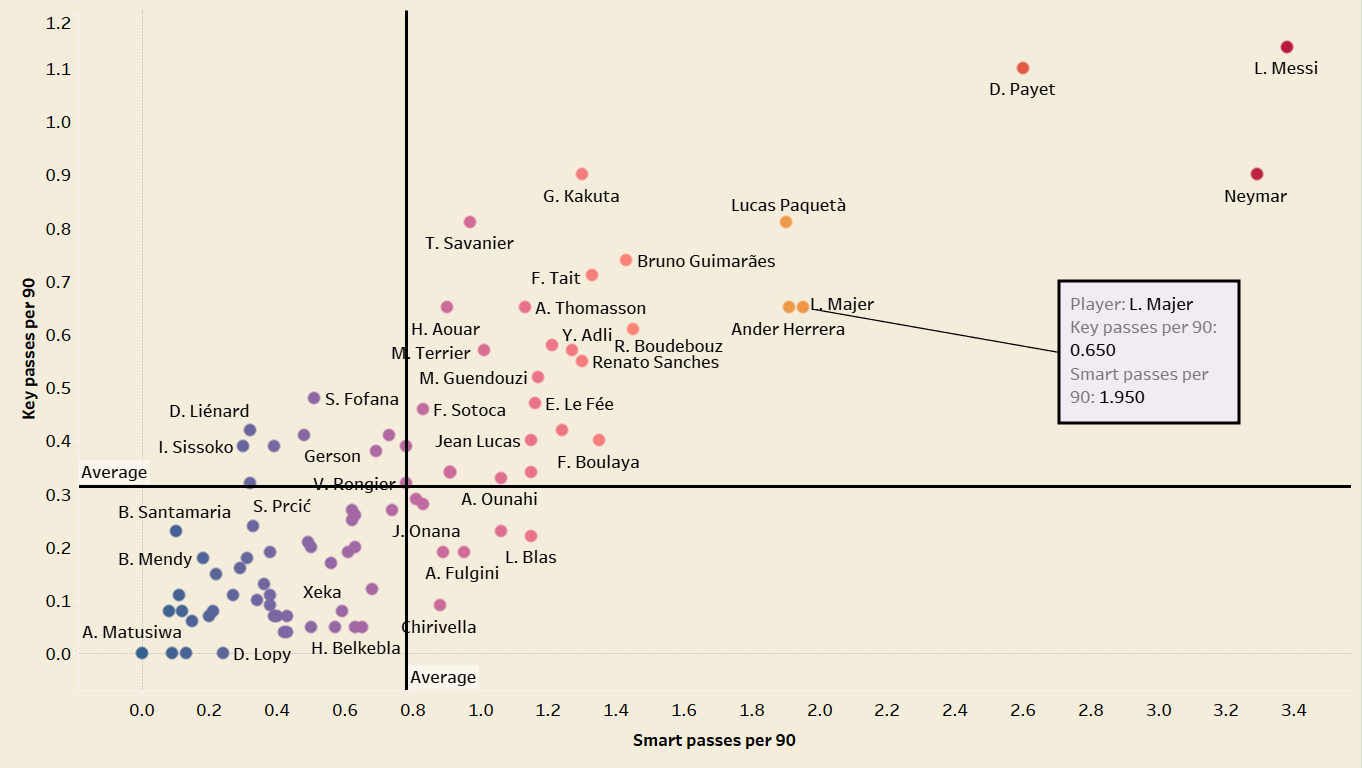 Although he isn’t quite at the same levels as Payet, Neymar and Messi he is still one of the best in Ligue 1.

There aren’t many passing stats you can look at that don’t show Majer to be one of the best in the league, below will show his passes to the penalty area per 90 and through passes per 90. Again, he is well above average in both. 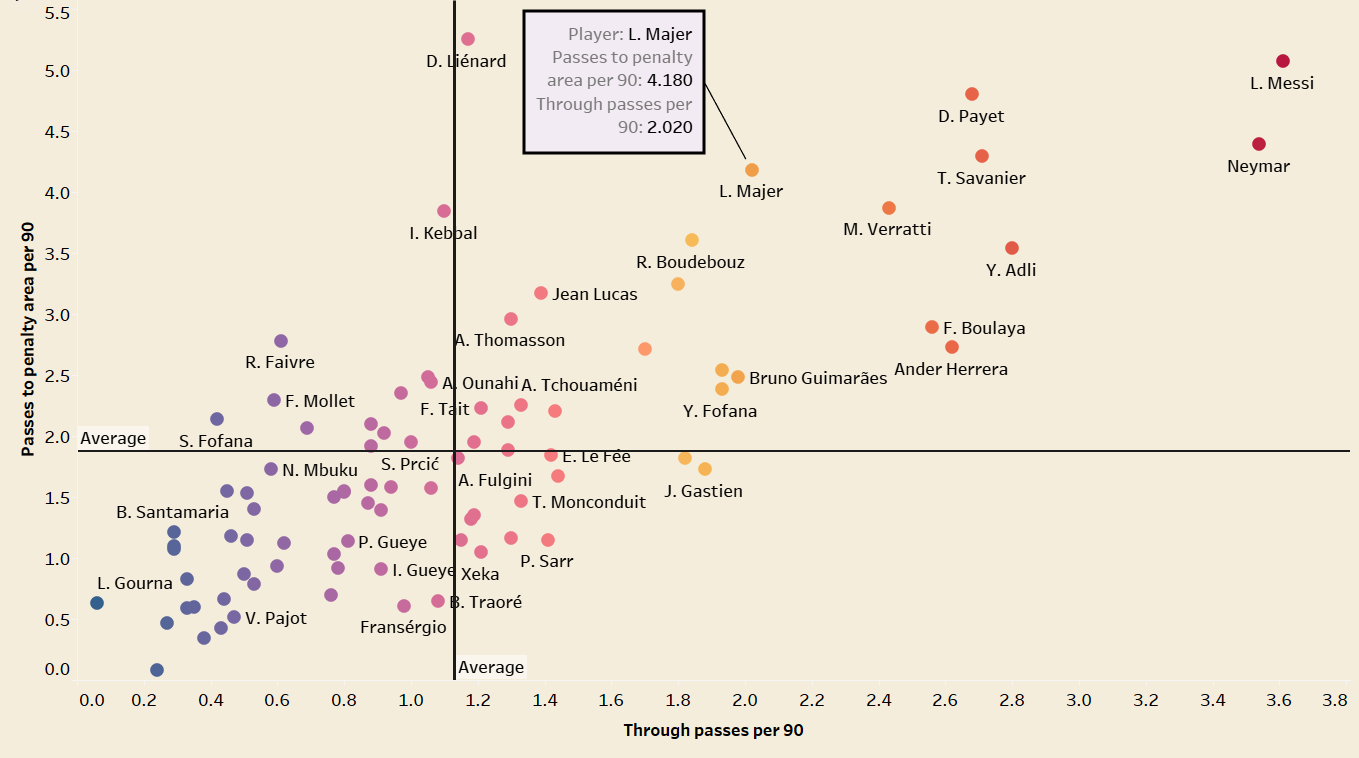 His passing quality is in addition to other qualities such as progressive runs. Now Majer isn’t someone who is blessed with physical attributes however he manages to effectively carry the ball, amongst some of the best in Ligue 1. As shown below, Majer is 5th in the league for progressive carries per 90 amongst midfielders. 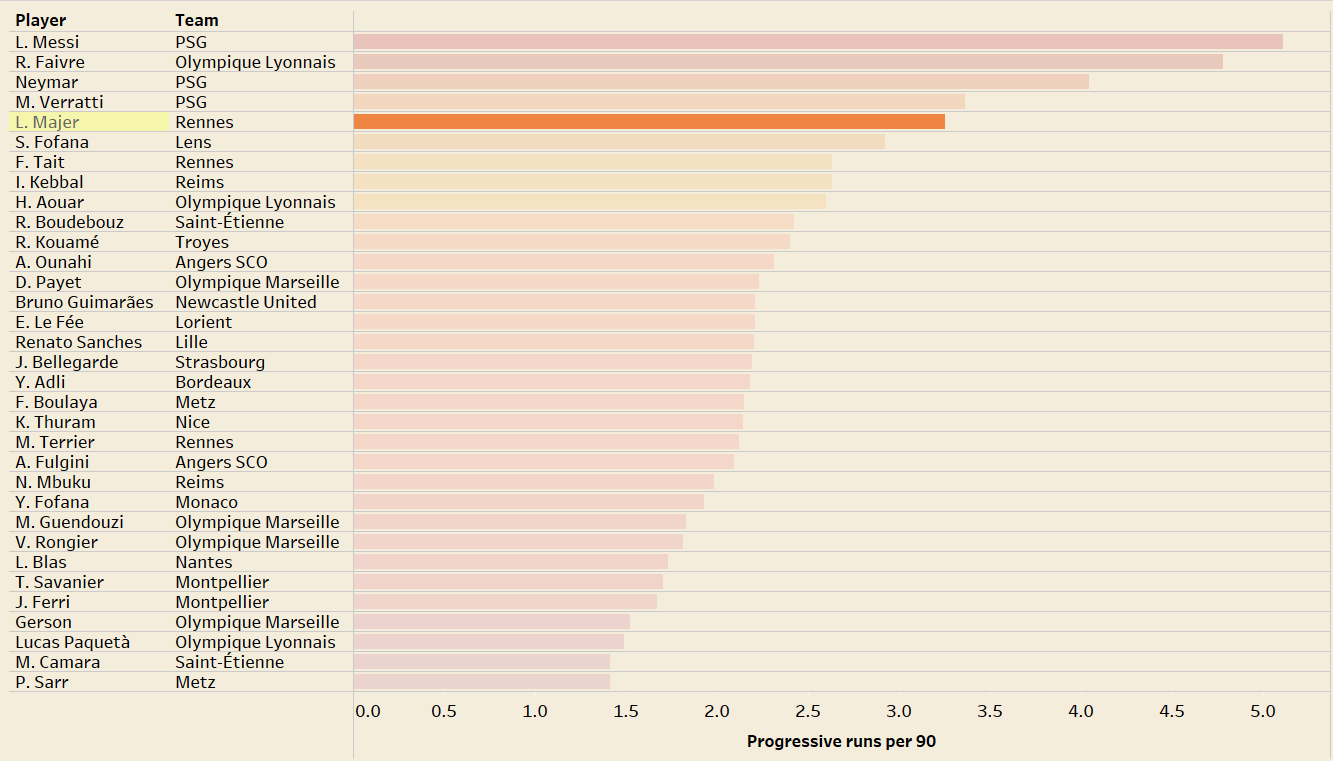 His passing and chance creating ability with his underappreciated ball-carrying make Majer one of the better attacking contributors for midfielders in the league, as reinforced below by the successful attacking actions table. 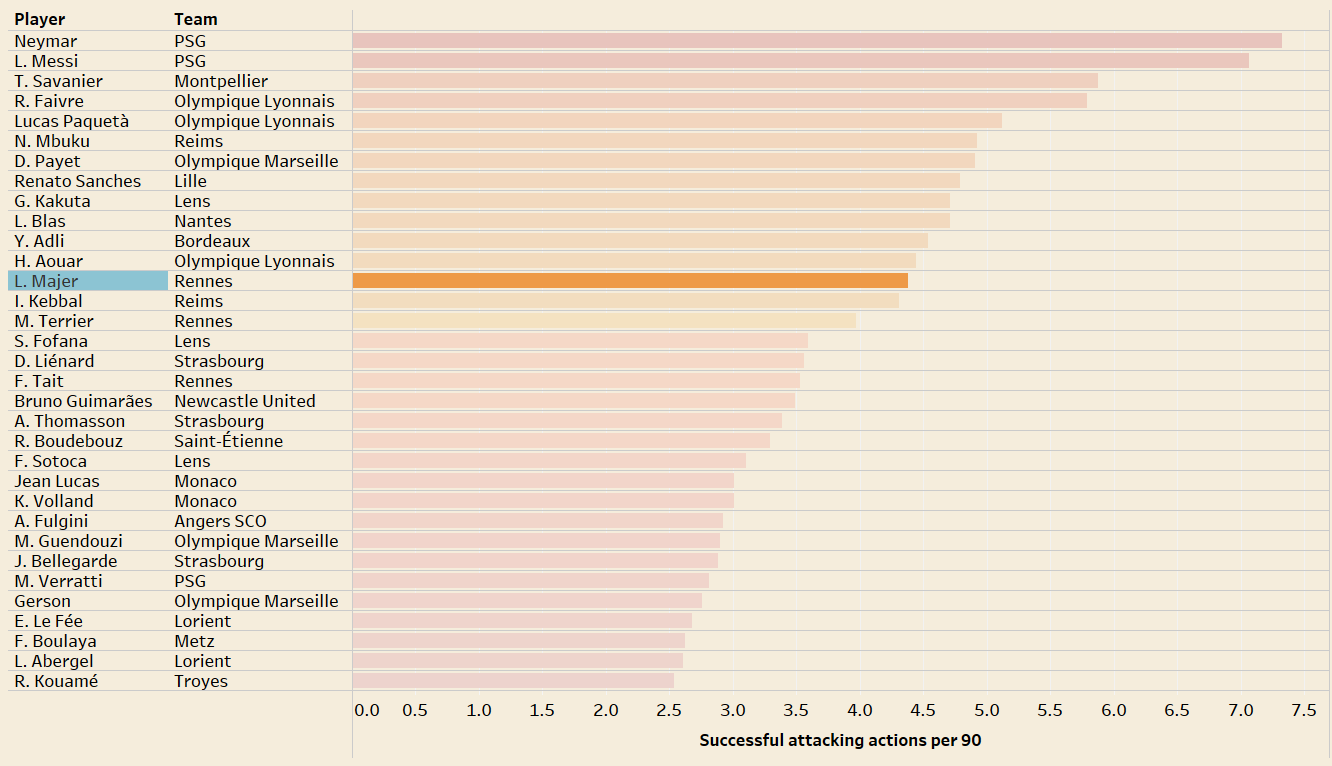 From the data we have unpacked, Majer is one of the best-attacking midfielders in Ligue 1, he excels on the ball while his team is in possession of the ball. The next step of my scouting process is to now see how he fairs in the video and in his actual performances.

Quality in the final third

As established in the data section of this report, Majer possesses excellent passing quality and quality in and around the box. He shows deft touches and a brilliant appreciation for time and space. Most players when in and around the box rush on the ball forcing errors and mistakes. Majer doesn’t do this he has great poise which allows him to be so dangerous. His passing is the main way he creates chances in the box but he can use his ball-carrying also. Below will show a couple of examples of the quality he possesses in the final third.

The first example shows when the ball has been crossed into the box but the cross has evaded the men in the middle and founds its way to Majer, as shown here.

Now Majer has some options for an immediate pass but he doesn’t rush. As the near defender applies pressure, Majer manages to hold him off by faking a pass, which buys him time till he finds the man he wants.

Majer manages to find Laborde on the edge of the 6-yard-box with Laborde heading home to give Rennes the lead.

The second example shows a touch of class and finesses from Majer to create a brilliant goalscoring opportunity for Martin Terrier. Majer has been played through into the box with time and space.

he has the potential to make two passes however he doesn’t force it. He instead commits the Lyon defender, before making a brilliant fake pass which allows him to get past the defender.

He then finds himself 1 v 1 with the Lyon goalkeeper and simply squares the ball to Martin Terrier who manages to fluff his lines and miss an excellent opportunity for Rennes.

Both of these examples reinforce the quality and poise that Majer shows in the final third to help create quality goal-scoring opportunities for his teammates.

Link up play on the right side

As already touched upon in this analysis Majer likes to drift into the right half-space looking to link up with the right-winger and right back, something he loves to do, creating triangles and overloads on the right side. The link-up on the right side of one of Majer’s key features when on the ball, it plays to Majer’s passing and ball carrying attributes.  This type of role in possession is similar to that of Nico Barella or Kevin De Bruyne. Below shows a good example of this link-up play.

Hamari Traore is playing a ball inside into Majer who is drifting into the right half-space.

After receiving the ball, he continues to drift into the right half-space before playing a left-footed pass (despite playing on the right Majer is left-footed) towards the byline for Traore. Traore gathers the ball and plays a cross into the box forcing a good defensive block from the Troyes defender.

This link-up play is suited to Majer when he plays in a 4-3-3 system or a three-man midfield, as there is the freedom to drift wider and create those overloads shown here.

So far, we have fully focused on Majer’s quality in possession of the ball and in the attacking phase. Which is only part of his role on the football field. Majer is a much less effective defender than an attacker. This is often the case, as very few players excel both in and out of possession to the top level.  Although Majer doesn’t excel defensively he still makes a solid enough contribution. Rennes are a side that likes to counter-press especially higher up the field, which requires Majer to be an efficient counter-presser and can explain why he has an above-average defensive duel per 90 with 7. In addition, league average performances in terms of PAdj interceptions and PAdj slide tackles, as shown below. 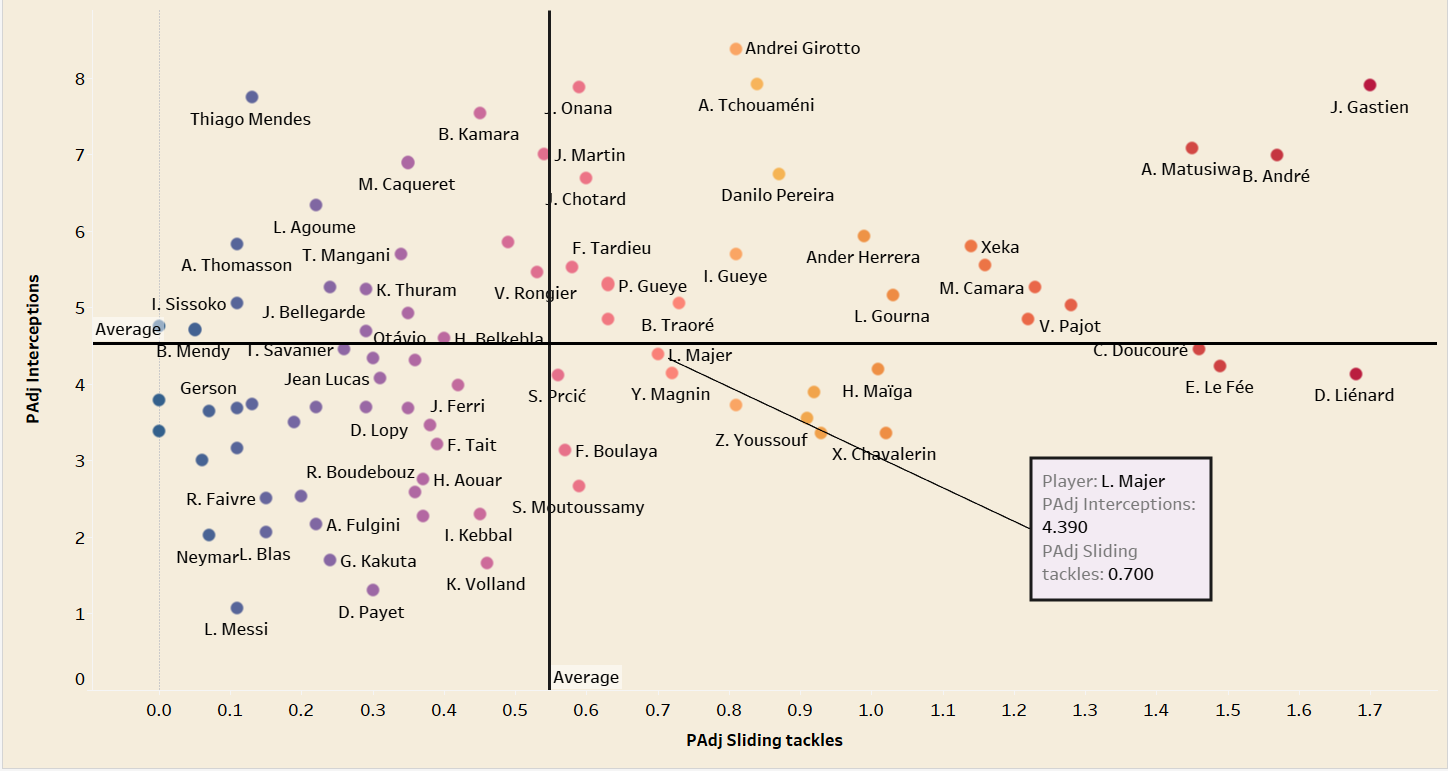 So, although Majer isn’t an excellent defender he still effectively contributes when out of possession. It is worth noting that some of the names who are also creative players like Messi, Faivre and Payet perform significantly worse out of possession than Majer.

Hopefully, this scout report and tactical analysis have given you a better understanding of Lovro Majer and the type of player he is. Can he make the step up in quality to an elite side in Europe? from what I have seen, yes. There are some issues around physicality, and this was evident when Rennes played Leicester city in the UEFA Conference league, where he was pushed off the ball on a couple of occasions. Apart from this, I see his technical quality being able to shine through. It will certainly help if Majer lands at the right club, preferable a possession dominant team who plays three in midfield and potentially a less physically demanding league all of this will help Majer excel at a potential new club