Like many South Americans, Evanilson moved to Portugal to prove himself in European football, with Portuguese giants Porto. Portugal has provided the opportunity to many South Americans to prove themselves before moving usually into one of the top 5 leagues. Recently we have seen Luis Diaz, Eder Militao, Ederson, and James Rodriguez use Portugal as their opportunity to showcase themselves to the rest of Europe and Evanilson may be the next name on that list. The 22-year-old Brazilian started his career at Fluminense where he did draw the attention of Liverpool however the move never materialised, and he ended up joining Porto in 2020. His Porto career never got going until this season, where he has managed to consistently score goals and emerge to be one of the best strikers in the Primeira Liga.

This tactical analysis and scout report will take a look at Evanilson’s game and the attributes he possesses that have allowed him to have a strong season so far but also identify any areas in which he could potentially improve to continue his progression.

Porto adopts a tactic of 4-4-2 the majority of the time and Evanilson plays as part of the strike partnership with Iranian striker Taremi or as a lone striker if they play one striker.  As you can see from the heatmap Evanilson spends the majority of his time centrally in the box but does sometimes drop deeper on the right-hand side to help in the build-up play. This is something that Evanilson may need to improve in his game but will discuss later in the scout report. 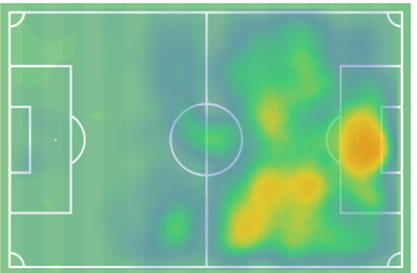 In addition to a heatmap, we can look at a shot map for Evanilson which shows the location of the shots he takes, which is shown below. As you can see Evanilson takes the majority in the box and particularly within the width of the goalposts, something the best strikers do. 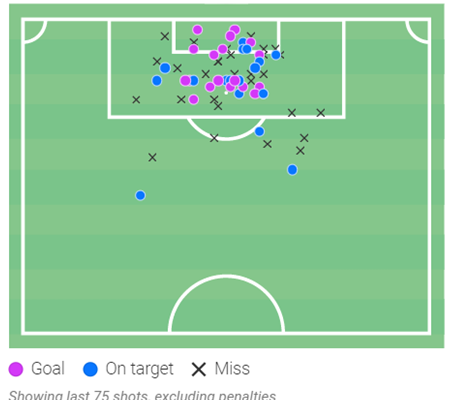 Evanilson doesn’t take many shots out of the box, which is a positive as these shots have a low probability of scoring, so he is efficient in the final third.

As always with my scout reports, I will address the player’s data and look to identify any areas of strength and any areas of weakness. When analysing the data, it allows you to understand the type of players they are but also allows for comparison against similar players in the league or sample. For Evanilson it will be interesting to see how he compares to Darwin Nunez, many would agree he is the best striker in the league and is heavily linked with a move to Arsenal. So far this season Evanilson has managed 11 leagues goals plus 4 assists, in addition to 7 goals in cup competitions.  Below we will look at non-penalty league goals per 90 and XG per 90 (unfortunately didn’t have access to non-penalty XG per 90). Evanilson manages 0.6 non-penalty goals per 90 and 0.55 XG per 90, he is outperforming his XG but doesn’t by an amount that should cause any worry. 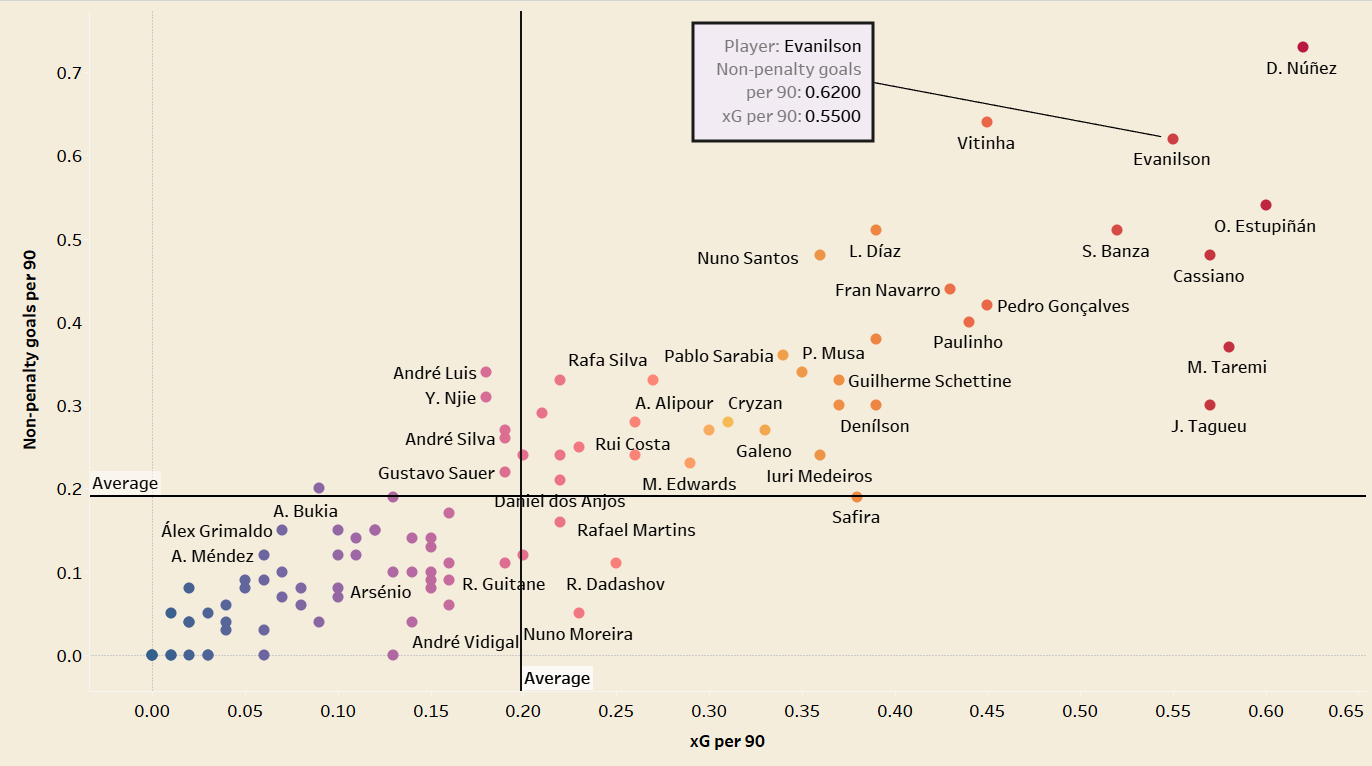 Although strikers’ primary function is to score goals, they must also contribute to the build-up play for the team and also create chances for other players. We can gauge this using different metrics but firstly we will look at assists per 90 and expected assists per 90. From the graph, we can see that Evanilson manages 0.17 assists per 90 from an XA of 0.1. 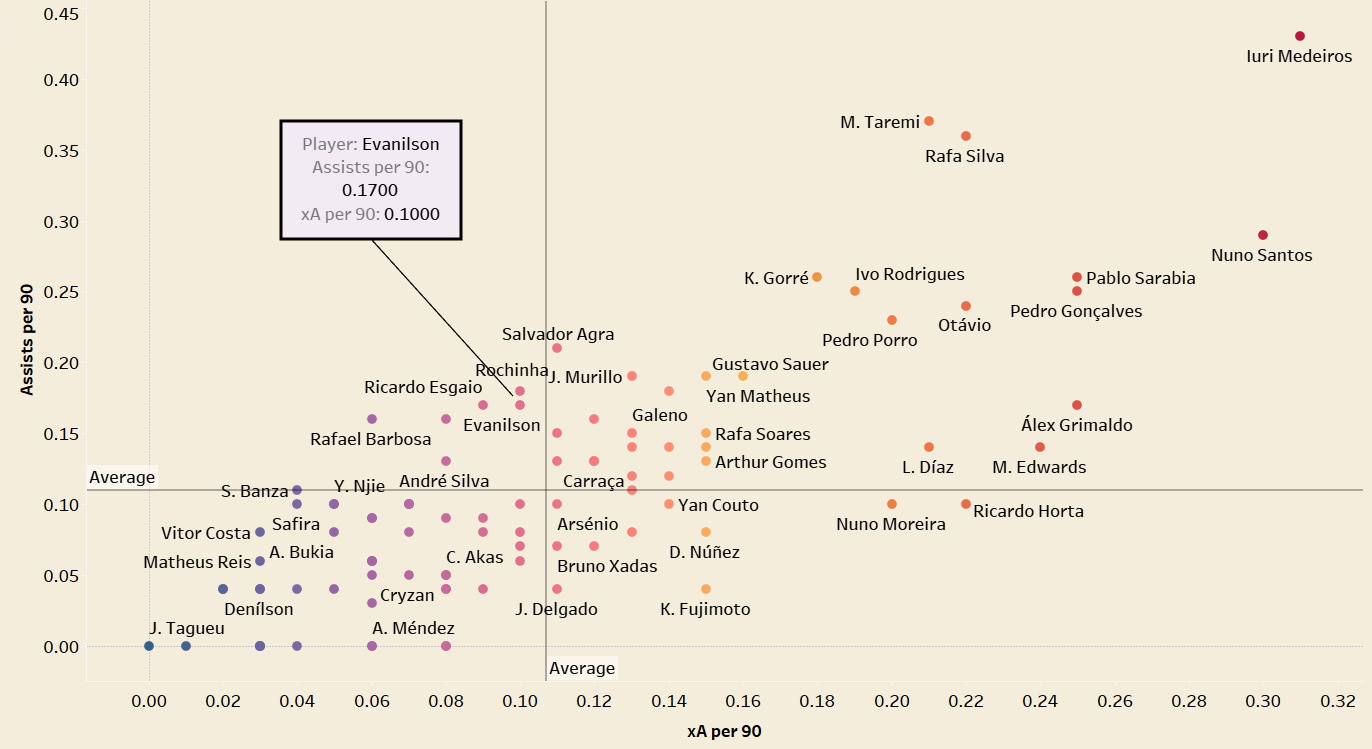 Although he is outperforming his expected assists, even if he regressed back to his XA per 90 it would still be a respectable assist total and around league average. Another set of metrics we can look to evaluate Evanilson’s overall attacking contribution, are Successful attacking actions per 90 and Touches in the box per 90. Evanilson is one of the league’s leaders in touches in the box per 90 however is well below average in successful attacking actions per 90, which is a slight worry, especially considering these metrics should favour players who play for more domain teams. 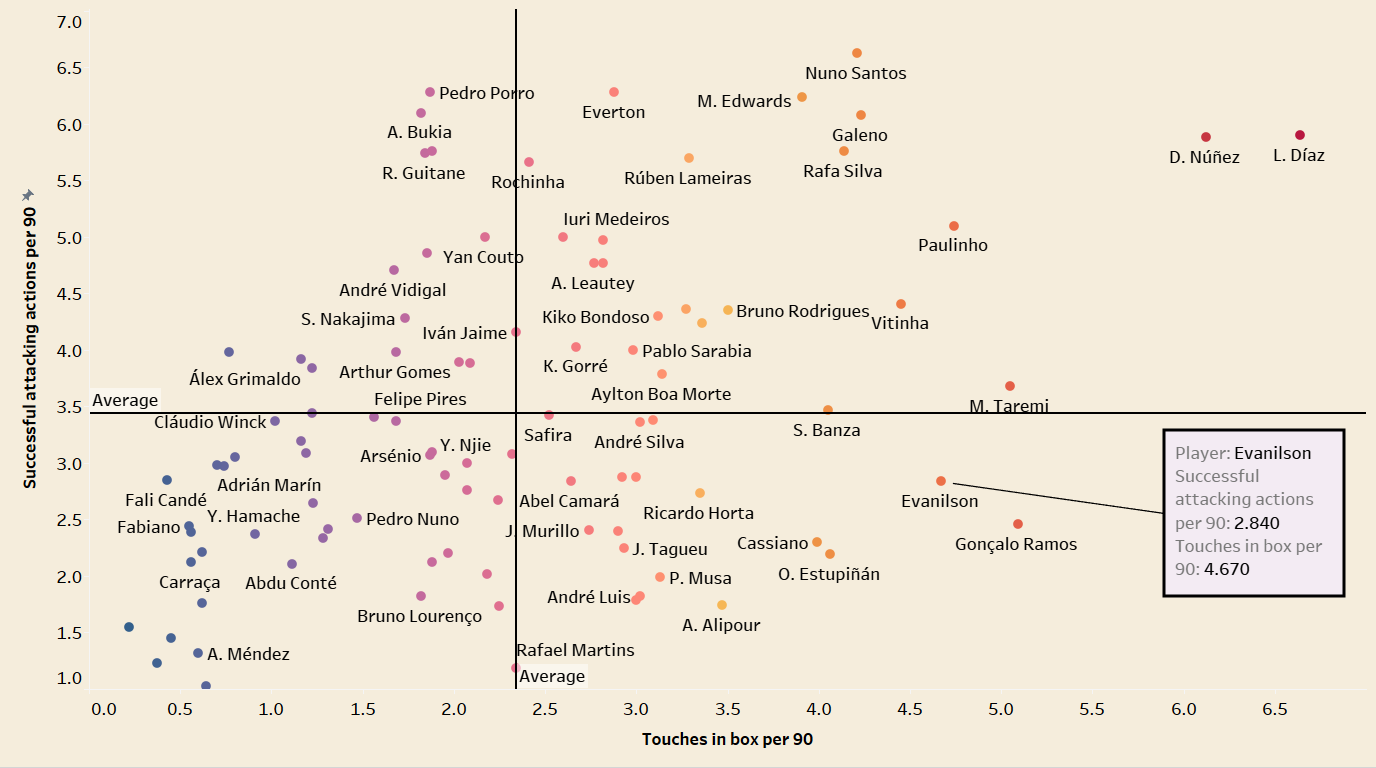 If you look in the top right corner you see Luis Diaz now plying his trade in the Premier League and Darwin Nunez, showing Evanilson still has some work to do to get to their level.  Finally, key passes per 90 and smart passes per 90 can also measure the chances created by Evanilson. Key passes per 90, are passes that directly lead to a goal-scoring opportunity for a teammate. A smart pass is a pass that attempts to break the opposition line. 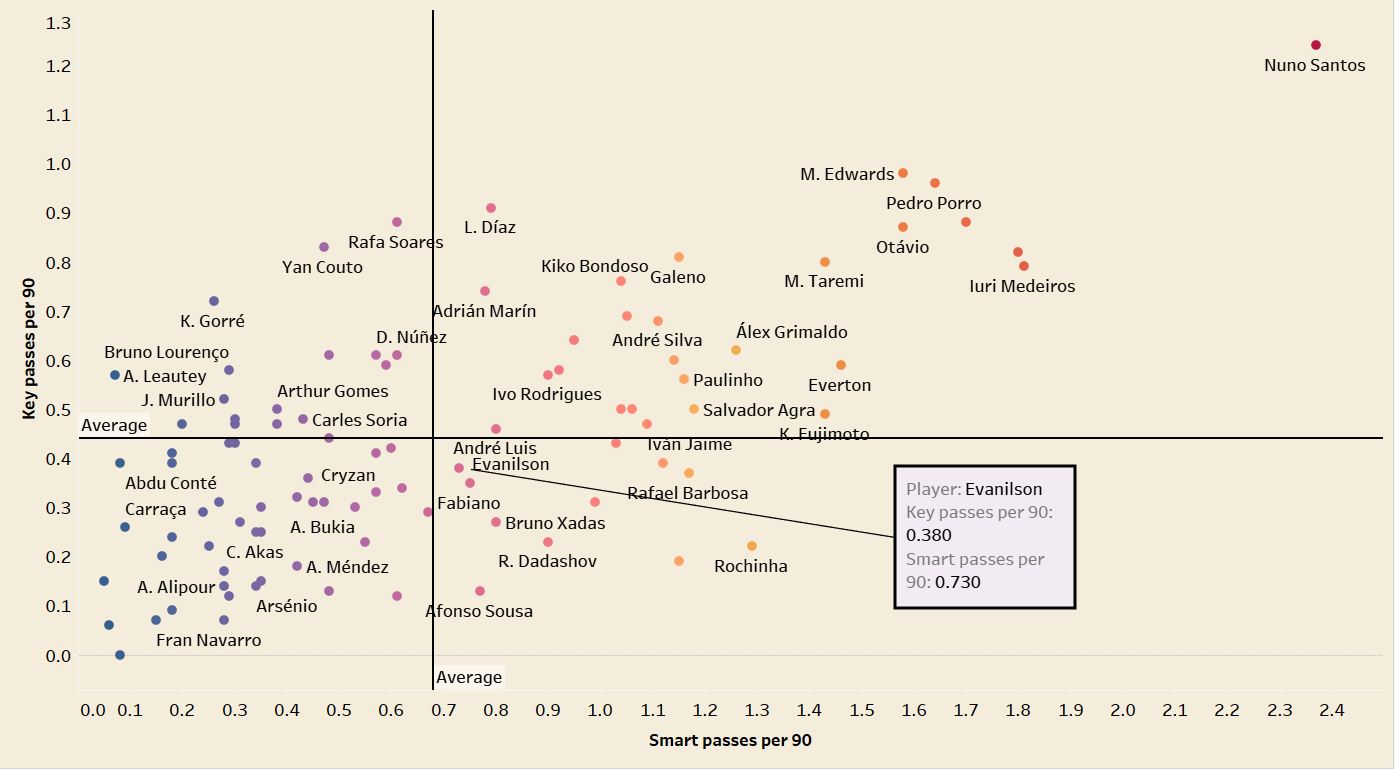 Regarding smart passes, Evanilson is above average with 0.7 per 90 however is just below average in terms of key passes.

From the data, we can see that Evanilson is one of Primeira Liga’s best when it comes to goalscoring and having chances in high-value areas. However, his chance creation and contribution in the build-up play is around average and could potentially improve especially if he is looking to take the next step in his career and get to the levels of players like Darwin Nunez.

When you watch Evanilson play and particularly watch the goals he scores, his ability to read the game and find himself in the right place at the right time stands out. Goals that many would refer to taps ins but personally, these are the goals those with strikers’ instincts score. Evanilson is one of those players, you can see this by his shot map shown above where all his goals are central and in relatively close proximity to the goal. He also shows great composure and quality when the ball falls to him in the box he never rushes his finishes and excellently picks out his shot with great execution.  below we will show a couple of examples of his strikers’ instincts.

In this example, Porto is on the attack and they have two players looking to make runs in behind the defensive line, Evanilson cleverly doesn’t run in behind but slows down which then forces the defender to either press on to him, creating space behind or go with the runner and leave him space underneath.

Evalinson’s teammate plays a pass into Evanilson who now is in a little pocket of space in the box. As shown below.

Evanilson manages to roll the ball past the one coming defender and rifle the ball in the top corner, shown below.

The ability to create a pocket of space in the box, which should be the area on the pitch with the least space is impressive but also his ability to coolly execute his shot must be admired.

The second example come against Gil Vicente, and again shows Evanilson strikers’ instinct. Porto has the ball in the final third and the player on the ball is going to play a clipped ball over the top of the defensive line for Taremi. Evanilson is also looking to make a run circled on the edge of the box.

Now even though his pass is ignored, Evanilson continues his run and offers support for Taremi. By doing this he loses the defender but also gives Taremi a passing option and this pays off with Taremi playing a cushioned header to Evanilson who has an open goal to score in to.

Again, great striker play from Evanilson and understanding of the game.

Now from the data analysis, it could potentially be concluded that Evanilson’s contribution in the attacking phase may only be scoring goals but when you watch the Evanilson footage that isn’t necessarily true. It is also a great example of why you need to contextualise the data and also combine it with traditional scouting. Evanilson does like to drop off however he does it less frequently than teammate Taremi, this could well be a tactical instruction, this doesn’t mean he can’t do it. The below examples will show Evanilson dropping off to help link-up play, showing he does have the ability to do so.  As you can see below, Evanilson here has dropped off deep to receive the ball of the Porto sitting midfielder.

The defence has relaxed and Evanilson has time to receive the ball and turn.  He then manages to release the ball for strike partner Taremi who gets in behind the opposition defensive line.

This is one of a few examples where Evanilson has dropped off to receive the ball off midfielders and link-up play and help Porto in their attacking phases. From the footage I have scouted I would say Evanilson definitely can drop off and link-up play and provide an all-around attacking play. The data is most likely influenced by Taremi, his striker partner who likes to drop off to link play also and leaves Evanilson on the shoulder ready to get in behind.

Evanilson is an emerging talent and is certainly a player with potential for the future. There is definitely room for improvement and development and another season in the Primeira Liga would be beneficial to his development. It is also worth noting this is the first season in Evanilson’s career where he has been consistently exposed to elite level football and will naturally take time for him to adjust.