This article represents the third installment in a six-part series on coaching team defending. This is looking at group tactics, rather than the individual, so whilst individual technique or tactics can certainly be coached if necessary during these sessions, these aren’t the main outcomes of the practices shown in this analysis.

This set of practices, put together hypothetically as one session in this tactical analysis, looks to work on the team defending principle of vertical compactness. We are aiming to keep a tight defensive unit and prevent an opponent from being able to easily find space between our defensive lines and play through us.

Whereas last week we were looking at our team keeping horizontal compactness, staying narrow, and shifting across the pitch as a unit, this session will look to build on this, but now have our team push forward or backwards on the pitch in unison and prevent space from being found between the lines.

When working on this topic as a coach, this session can be used to focus on a specific group, eg the midfield supporting the press of the front three, or the defence mirroring the movements of their midfield, but equally it can be used as a session to focus in on the entirety of the team’s shape when out of possession.

A positional game is an excellent way to start a practice, and if the team is familiar with such a set-up like the 4v4 + 3 shown in this example, then it reduces time needed to explain the practice.

This practice can be done where the blue and red teams transition between attack and defence and vice versa after possession is turned over, or the defending team in the middle, in this example the four reds, can be given a set time to defend. Once the ball is won, the practice can reset from the blue team.

As you can see in the following image, there are three bounce players, shown by the grey circles. These players are on whichever team attacks and therefore create a 7 v 4 for the team in possession. 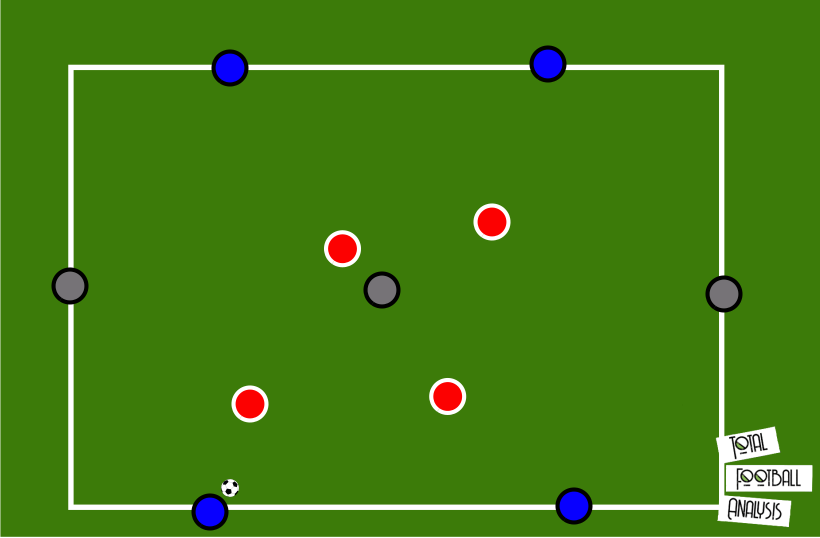 Goals can be given to the possession team for 10 consecutive passes, for example. To make it more difficult for the in possession team, lateral passes along the line should be prohibited, forcing the outside players to have to at least play a pass inside the rectangle, and allow the defensive unit to not have to press flat passes along the line which will stretch them and may prevent them from gaining success.

Another goal to put in place, and one that will help bring out the key learning from the overall session is that if the central bounce player can be found and then play to the opposite side he received from, replicating a player receiving the ball between the lines and continuing to play forward, this can instantly be given as a goal.

This reward put in place for the possession team will hopefully force the defensive unit of four to remain compact together, and prevent this player from receiving possession.

We can see this pattern occur over the following two images, where we can see the red team are not compact as a unit, and therefore there is space for the central bounce player to receive. 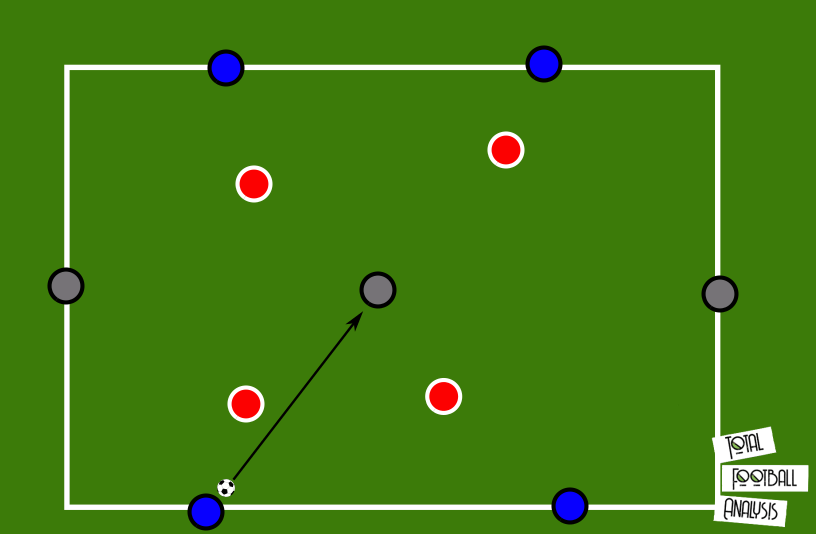 After receiving, and then playing to a player on the opposite side, he registers an instant goal for the in possession team. 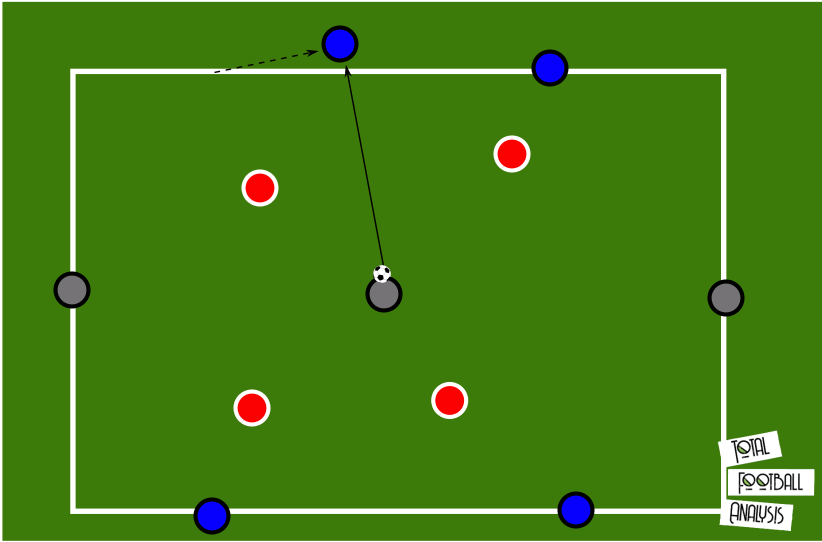 The main coaching point of this practice is to work on the three supporting players in the defensive unit. When one player from the defending team presses, can they support this, pushing forward or across the pitch, to ensure the team stays compact.

Can they cover the central bounce player, whilst also still putting the team in possession under pressure.

If the defensive unit are not compact, it can be powerful to point out all of the passing lines available to the in possession team.

We can see seven different passing options available in the image shown below. 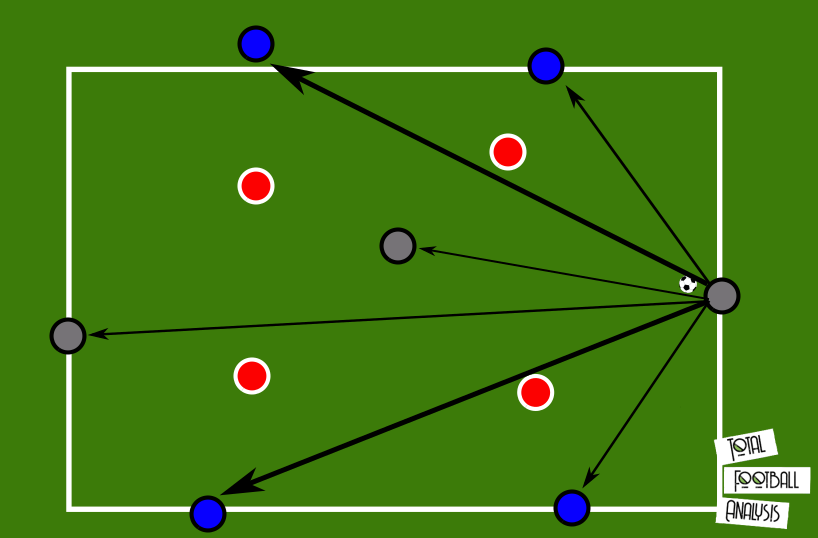 However, if the defensive unit can stay compact, and yet still be aggressive in stepping forward to press the opponent, we can see how these same passing lines can be covered by just four players, making it far more difficult for the possession team to play through, and greatly increasing the chance of forcing a turnover. 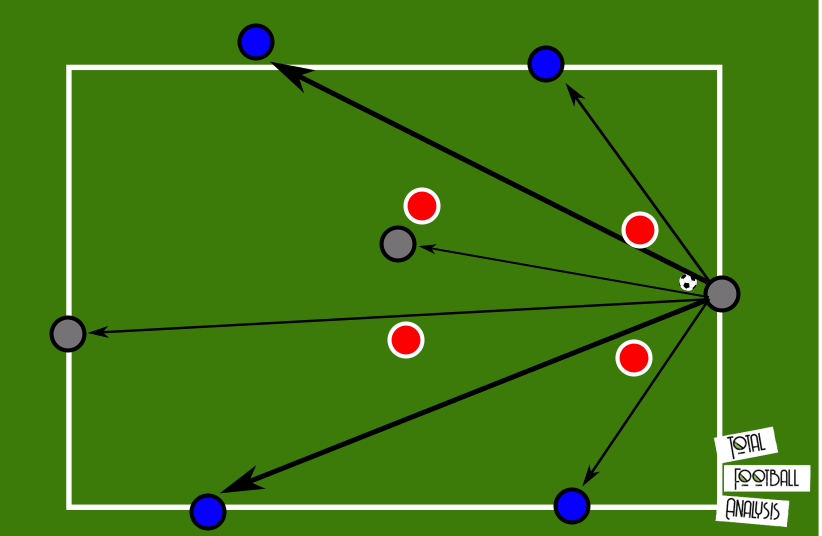 This practice can of course be replicated with greater numbers with the same outcome still able to be drawn out of it.

For example, a 6v6 +4 can be done in the same set-up, but of course, the size of the practice would need to be larger. 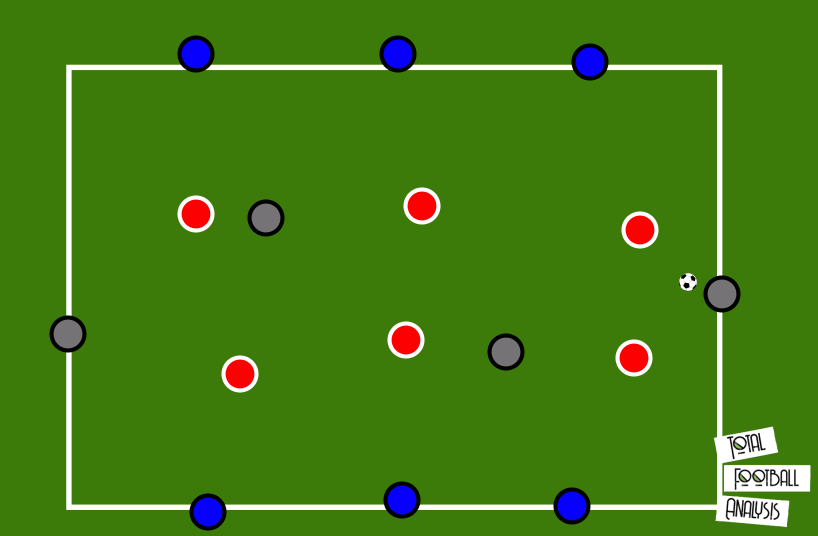 The defending team could be put into a shape like the one above, or the one below, or they can be given free reign and ownership of working out a beneficial shape that will allow them to press and remain compact. 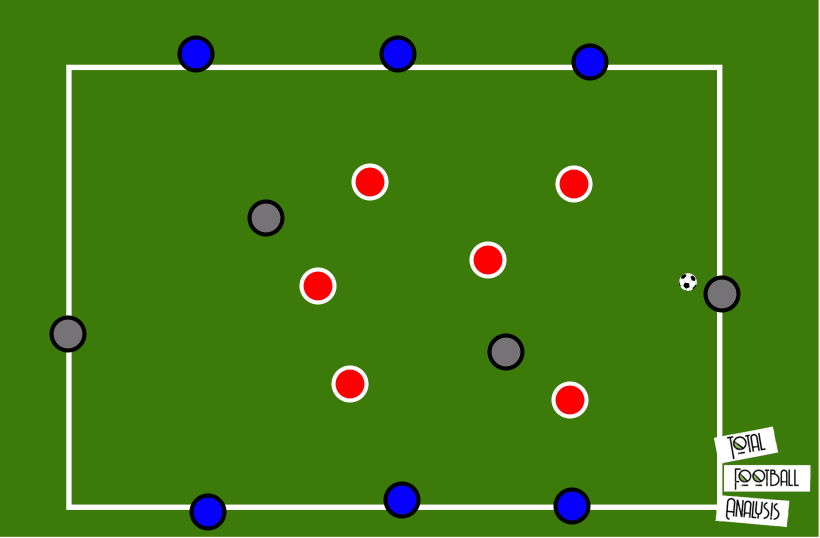 Building on the previous practice, a small-sided game with two goals on either end and the pitch divided into five equal sections is an effective way to continue to bring the principle of vertical compactness into a game situation.

Using the five channels can be effective given the previous week’s session coaching horizontal compactness, where the team were given five channels and asked to “turn them into three” when in the defensive phase, occupying the three closest channels to the ball’s location.

This same rule can be applied here, with the out of possession team asked to occupy three channels when defending, but of course, this time the channels are vertical. In doing so they can keep a vertical compactness close the location of the ball. 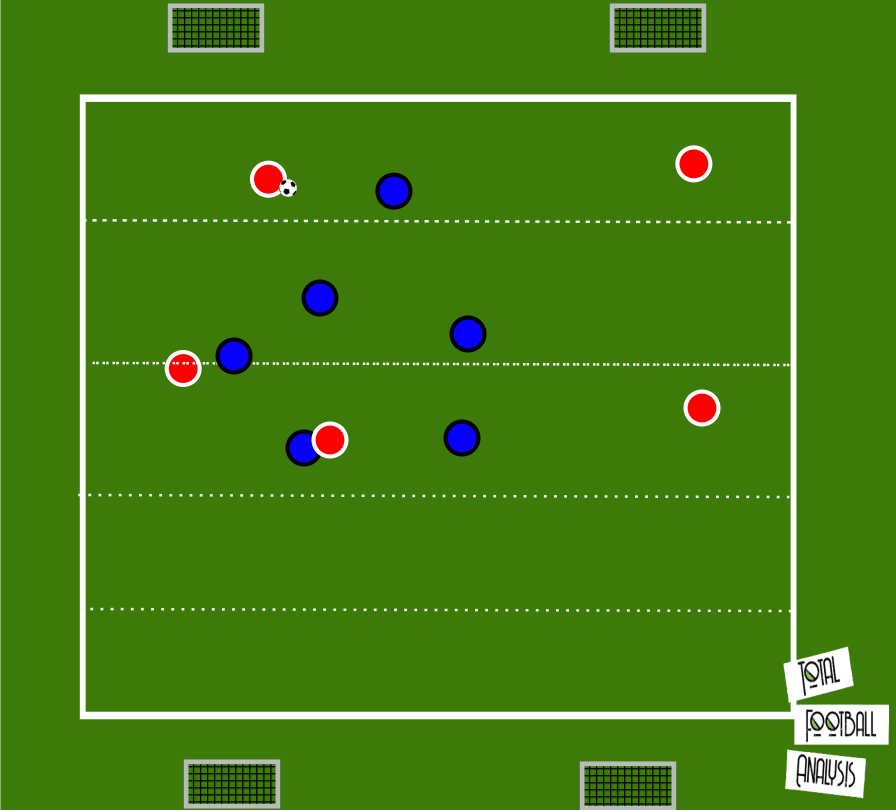 Putting an offside rule in place will ensure that the game remains compact, where if a player strays into a vertical channel behind the last defender, they are offside. This also makes it easy to manage as a coach, particularly if you are coaching by yourself without any assistants who could otherwise watch for the offside.

It’s highly likely that the defensive team will begin to gradually fall back after a while, unlikely to be able to maintain intense periods of pressing and stepping forward for too long. This isn’t a problem and is still very much game-realistic. However, it makes sense to place the mini-goals five yards away from each end-line to ensure players don’t just stand in front of the goals. They can also work on protecting the goal (or passing line in a game) by using their covershadow, rather than just simply standing a yard in front of it, which isn’t game realistic. 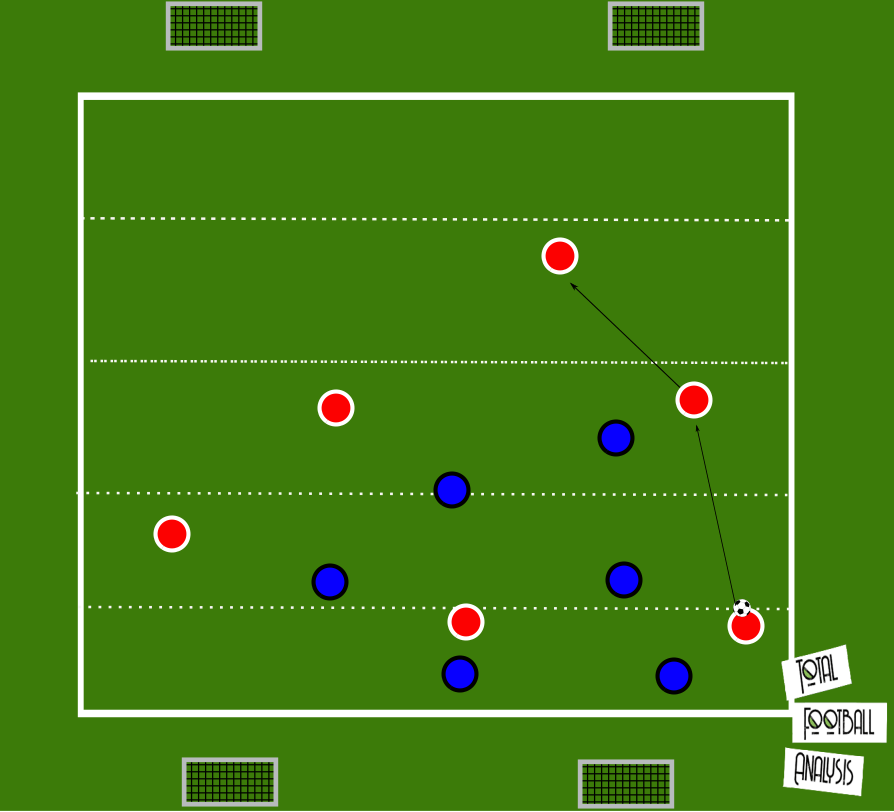 As they do this, can they communicate to their team that they are stepping forward to press, and can the players behind him recognise or anticipate this press and begin to step forward themselves. Once again, the defending team should be able to remain within three vertical channels of one another. 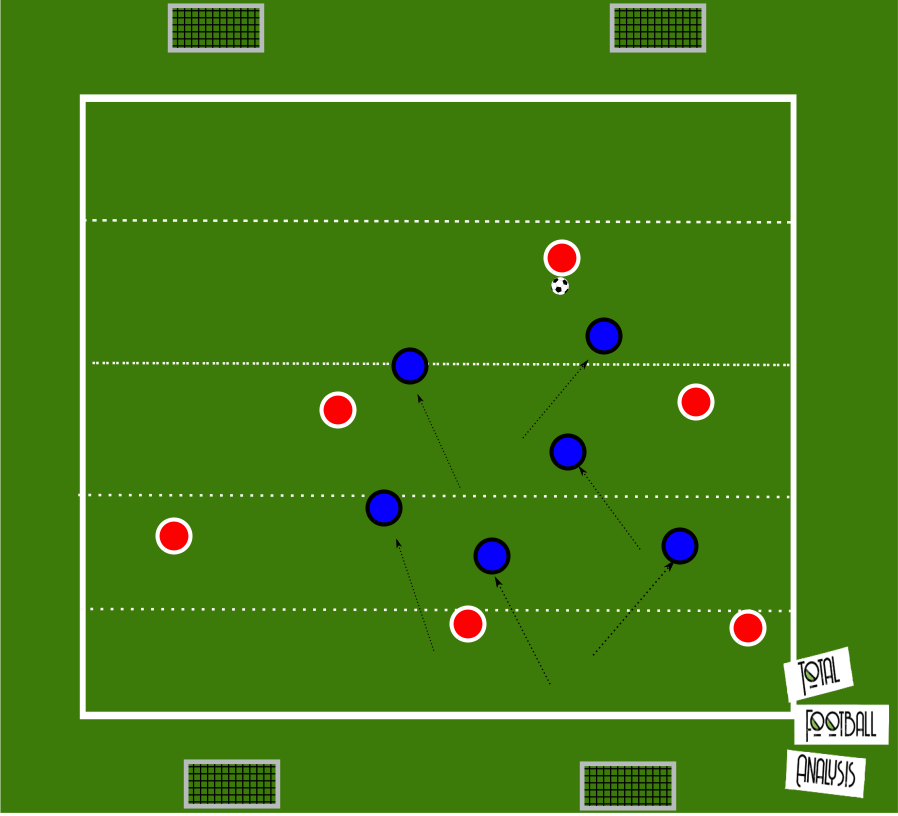 Once again, revisiting last week’s final practice, this can be built on once more by keeping a similar set-up but now with five horizontal channels over a longer distance than in the previous session, whilst keeping the same vertical channels as there were last week.

In last week’s practice, players were locked into three different third of the pitch whilst they filtered across the pitch, trying to keep within the same three vertical channels.

This week, the players can move as they wish but the goal is to maintain their shape within three vertical channels again, but also three horizontal channels. This wording can be confusing, but we can see this in the image below.

With the ball with the red, left-sided defender, the entire blue team is within three vertical channels of one another, and three horizontal channels of one another. This game can be be worked on with an attacking team and a defending team, where perhaps the defending team are given a time limit to score to ensure it continues to work as a game, but the attacking team regain possession quickly, but equally it will work as an end-to-end game where both teams take turns to attack and defend as they would in a normal match. 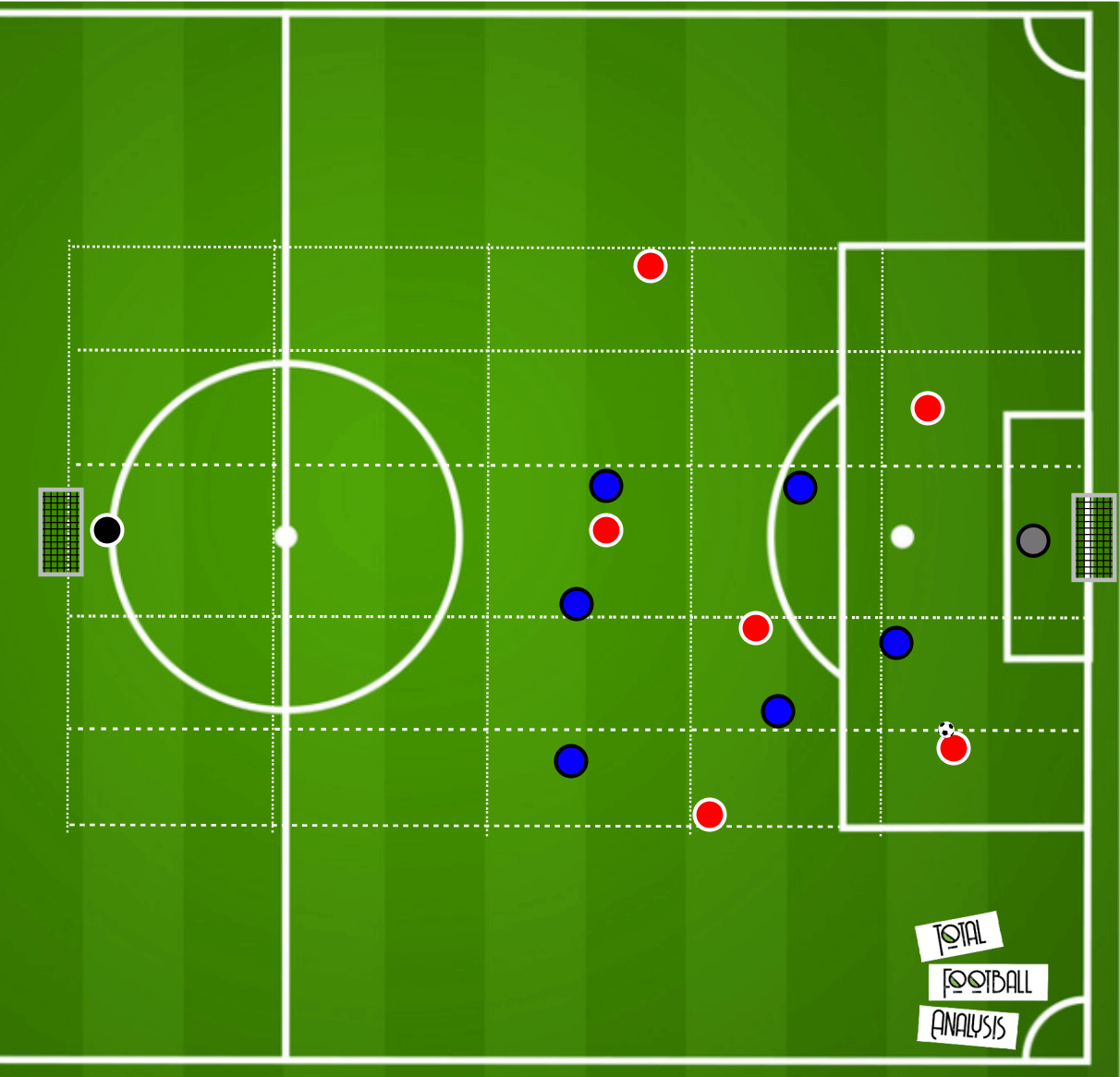 By having this shape, they are compact, difficult to play through, and can shift across the pitch whether from left to right, or backwards and forwards. They should be putting the work from the session into place in this practice as much as possible. Can they replicate the movement of the players around them? Just as in the previous practice, the player leading the press will likely dictate when they step forward, and the players behind them will need to replicate this. The player leading the press will still need to communicate, but there should be communication throughout the team, organizing their team shape, and preventing the opposition from playing through the centre of the pitch.

This practice can be run with a large number of players, with the previous image showing a 6 + GK v 6 + GK, but this can go up to 8 + GK v 8 +Gk. With any more players involved than the pitch may need to played closer to full size, and at least certainly full width.

With the more players, and introducing a defined backline for the blue team in this case, we can see how it begins to look more like a game. 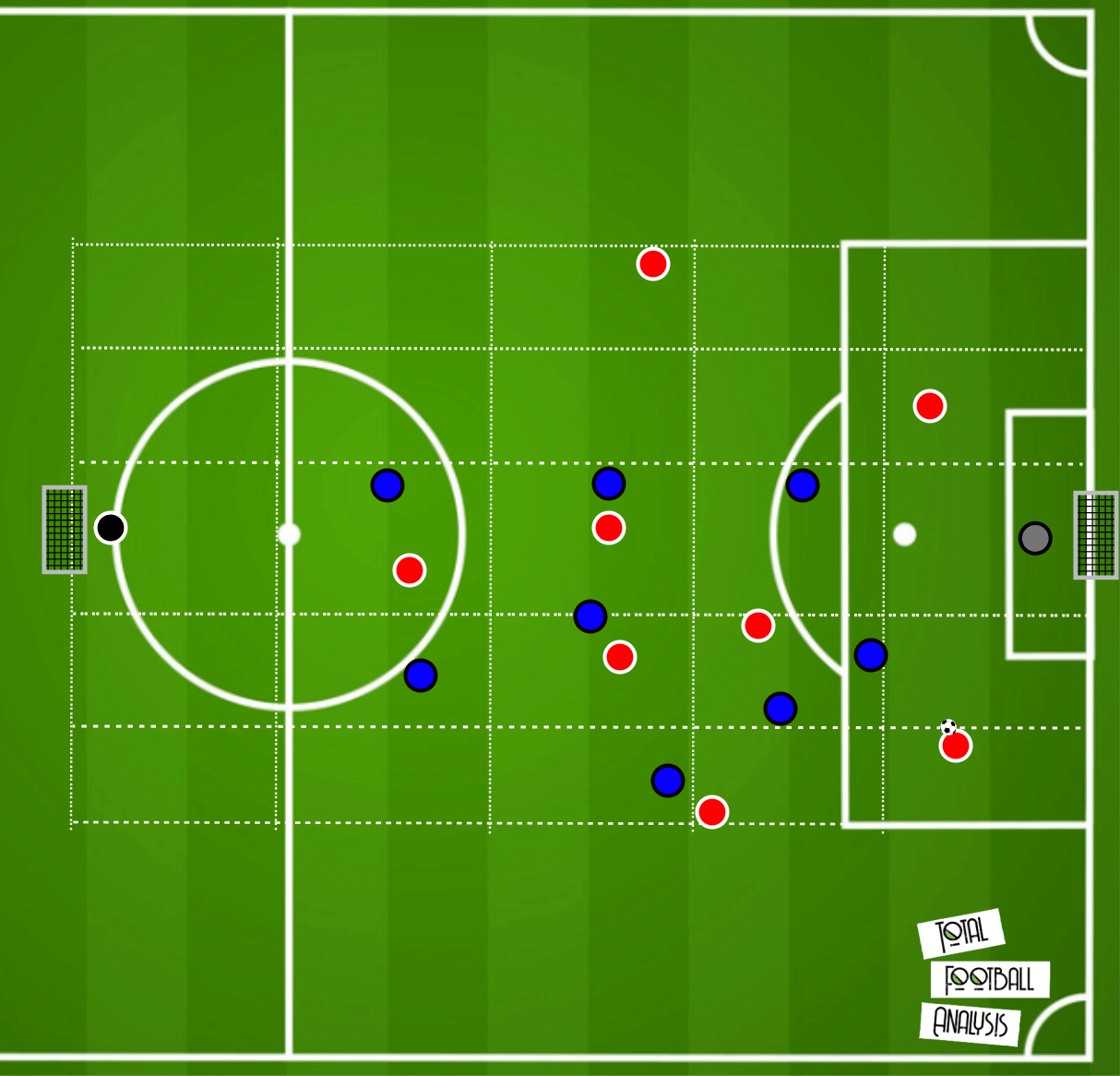 There may be cases, like in the previous practice where the possession team has the ball in an advanced position on the pitch and the defensive team can once again use the “5 into 3” principle to ensure they have a compactness which makes them difficult to break down. 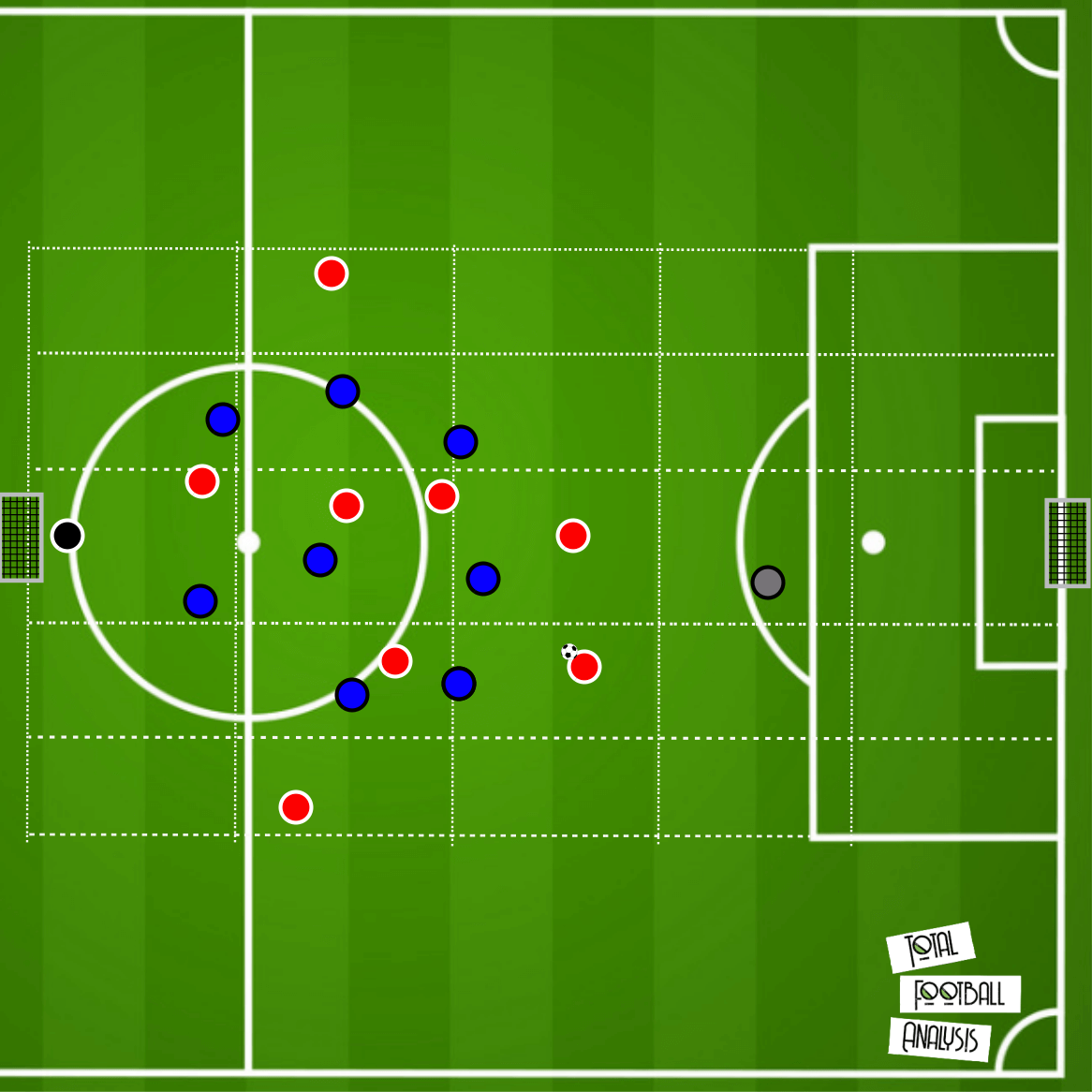 Throughout this practice we want our team to gain a greater understanding of how to facilitate vertical compactness. They need to ensure they mirror each other’s movements and push up together. If they fail to do this they will leave gaps between the lines and the opposition can access these areas to play successfully through our defensive block. This session will provide them the opportunity to work on this compactness through moving together as a unit, whilst it will require them to continuously communicate with one another, with the player leading the press initiating the press and the players behind them organizing one another to remain in shape, and push up together. Finally it will put this learning into a game situation, whilst forcing the players to continue to build on their learning on horizontal compactness from the previous week’s session.