The closing stages of World Cup qualifications to Qatar are among us with key deciding games taking place across the world. So far during the final qualifying round, Italy present themselves as the biggest shock exit, as their loss to North Macedonia midweek ended their World Cup hopes – this dismissal meaning they will be absent for the second tournament in a row.

While the European qualifiers hot up, Africa’s CAF qualifiers also increase in significance. In CAF’s third round of qualification, the ten group winners from the previous round play a two-legged home and away tie, with the five remaining teams heading to Qatar. Out of the many interesting ties drawn within this round, Egypt vs Senegal offers the most promise for many reasons.

Only a few months ago, these two teams were battling it out to be crowned kings of Africa. It was Senegal’s day as they triumphed for the very first time at the African Cup of Nations. Now, these two teams meet again, fighting for a place on the main stage of international football. Senegal’s Sadio Mané and Egypt’s Mohamed Salah will be tried to elevate their teams to the best of their ability, but only one can survive.

This tactical analysis will discuss Egypt’s fast start and how they remained dominant during the first half. In addition, I will look into how Senegal struggled initially but turned the tide after the interval, giving hope for the second leg.

Egypt made use of a 4-3-3 formation. The back-line comprised Mohammed El Shenawy in goal, with Ahmed Fattoh, Mahmoud Hamdy, Mohamed Abdelmonem and Omar Gaber in the back four. In midfield, Arsenal’s Mohamed Elneny, Amr El Solia and Hamdi Fathi. The attacking trio comprised Mostafa Mohamed, Trézéguet and Liverpool’s Mohamed Salah.

The away side matched Egypt during this match, regarding formation. In goal, Chelsea’s Edouard Mendy with forming the rest of the back-line. In midfield; Nampalys Mendy, Idrissa Gueye and Cheikhou Kouyaté. In attack, Famara Diedhiou with a Premier League duo of Ismaïla Sarr and Sadio Mané. 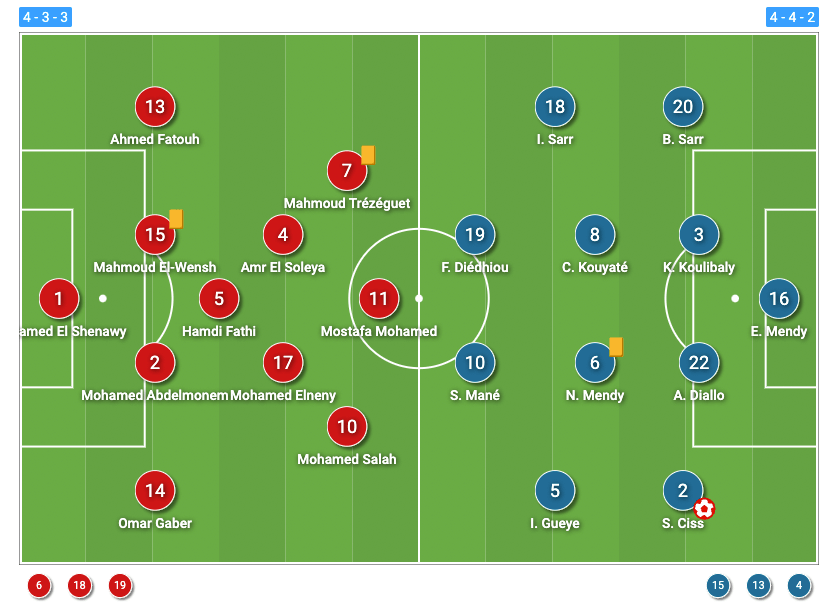 As mentioned prior, Egypt made use of a 4-3-3, but this shape varied during different phases of play. Both Egyptians full-backs, Ahmed Fattoh and Omar Gaber, were stationed high and wide, resulting in both Trézéguet and Mohamed Salah tucking inside and playing within the half-spaces. Quite frequently, one of Hamdi Fathi or Mohamed Elneny would join the back-line, either splitting the centre-backs or slotting in, playing as an outside centre-back in a back three. The three-man unit against Senegal’s pressing front two proved to be a good numerical advantage, as Egypt could create passing lanes through to the centre of the field, as opposition strikers Sadio Mané and Famara Diedhiou were stretched. With the back three being formed, the double pivot in the centre and the full-backs high and wide, operating on the same horizontal line as the double pivot, Egypt’s shape did at times resemble a 3-4-3 shape.

Senegal’s press from the front was at times aggressive, and occasionally would utilise a half-press, attempting to simply stifle their opponents. When Senegal took a less zealous approach and condense space in the central areas, Egypt well used the wide areas. During these types of scenarios, the home side showcased good flexibility and fluidity, with their countermovements and pinning of the opposition to create space.

Here we can see Pharaoh’s 3-2 build-up structure with Mahmoud Hamdy in possession. The wide defender drives into the space ahead. Because of Egypt’s central midfield, Amr El Solia and wing-back Ahmed Fattoh occupying Cheikhou Kouyaté and Ismaïla Sarr, a passing lane is created within the left half-space towards Trézéguet. Manager Carlos Queiroz utilised often this type of scheme throughout the first half and was a gateway regarding bringing the ball forward. 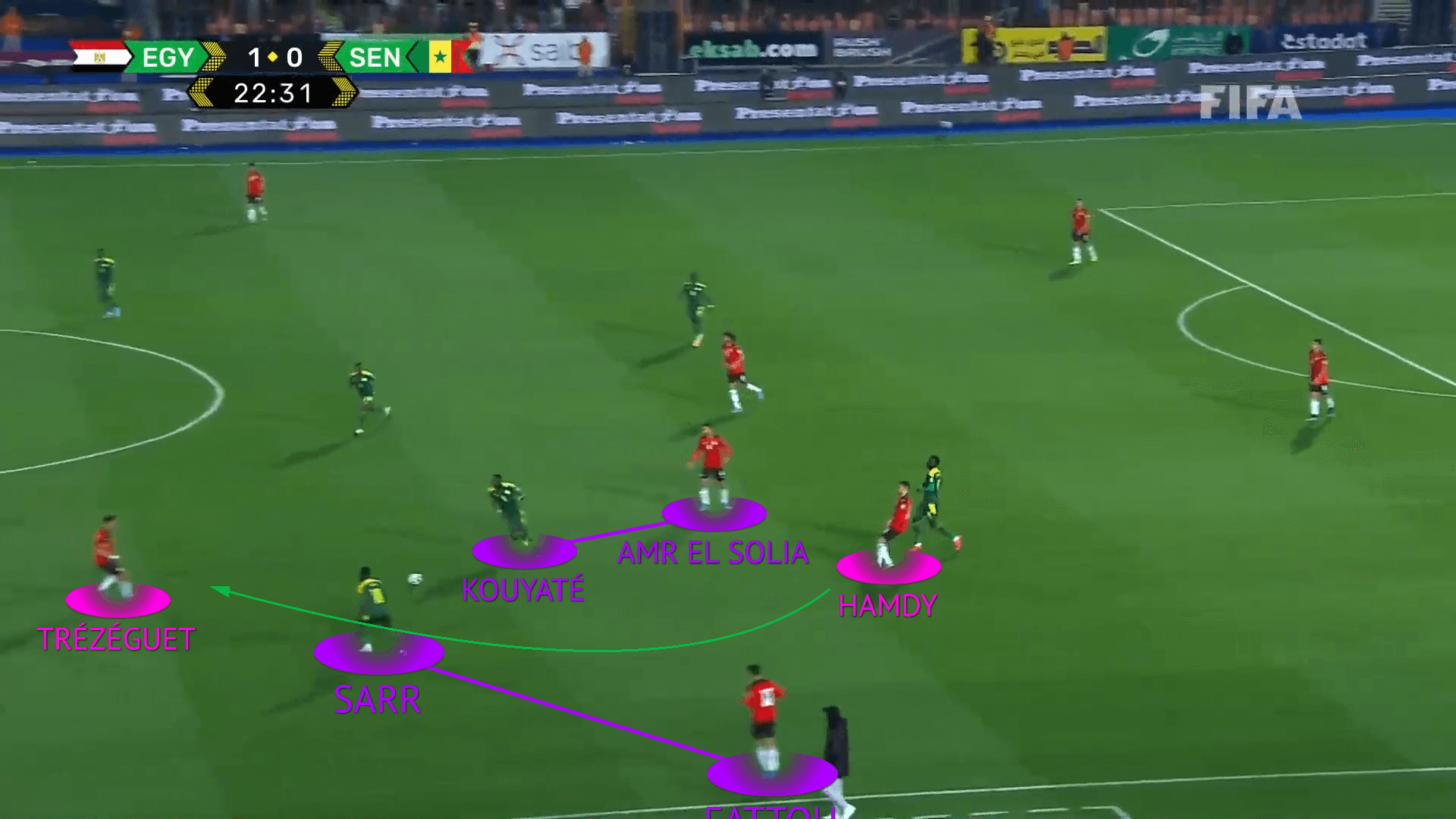 Egypt’s in-possession game was strong and structured during the first half, and we can say the same when out of possession. When Senegal tried to take the initiative of the game or build-up from the back, the home side made use of a 4-4-2 medium block, which became a 4-3-3, with the ball side winger pushing slightly higher when Senegal pushes the ball into this territory. Furthermore, during Senegal goal kicks, their opponents utilise a clever man orientated approach.

Here we can see Senegal (green) building from the back within a 4-3-3 formation from the right-hand side. Egypt’s striker (10) presses the defender on the ball while keeping Senegal’s defensive midfielder (5) within his cover-shadow, denying an inwards pass Both of Egypt’s wingers are standing close to Senegal’s left centre-back and full-back. Egypt’s midfield two are man-marking Senegal’s pair, tracking the movements and not allowing an inch of space. 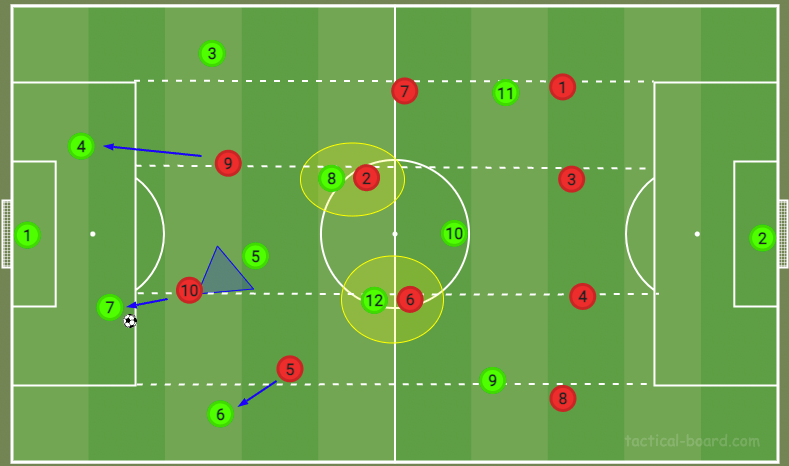 The current AFCON champions conceded an early goal by Mohamed Salah—a goal say may consider being quite unfortunate. Regardless, Senegal’s first-half performance did not warrant them any sort of luck. Like their opponents, Senegal attempted some interesting tactics of their own and ventured away from a generic 4-3-3. The away side during the first phase of play at times employed a 2-2 structure, involving the two centre-backs and a double pivot of Nampalys Mendy and Idrissa Gueye. They stationed Cheikhou Kouyaté slightly higher, within the right channel, being able to combine with the attacker further forward. While Kouyaté was in the half-space, Ismaïla Sarr was prone to drop back slightly while still creating the width of the right-hand side. When Senegal found themselves in wide areas, they did not make the best of these situations, unlike their opposition, Egypt.

Here we can see Ismaïla Sarr in possession, facing an Egyptian defender, 1v1. While Ismaïla Sarr is trying to beat his man, a chasm of space is ahead, which can be advantageous for Senegal. During this situation, Bouna Sarr, Cheikhou Kouyaté and Nampalys Mendy stay idle, not wanting to enter the space and add value to this attack, which could have led to a promising outcome. 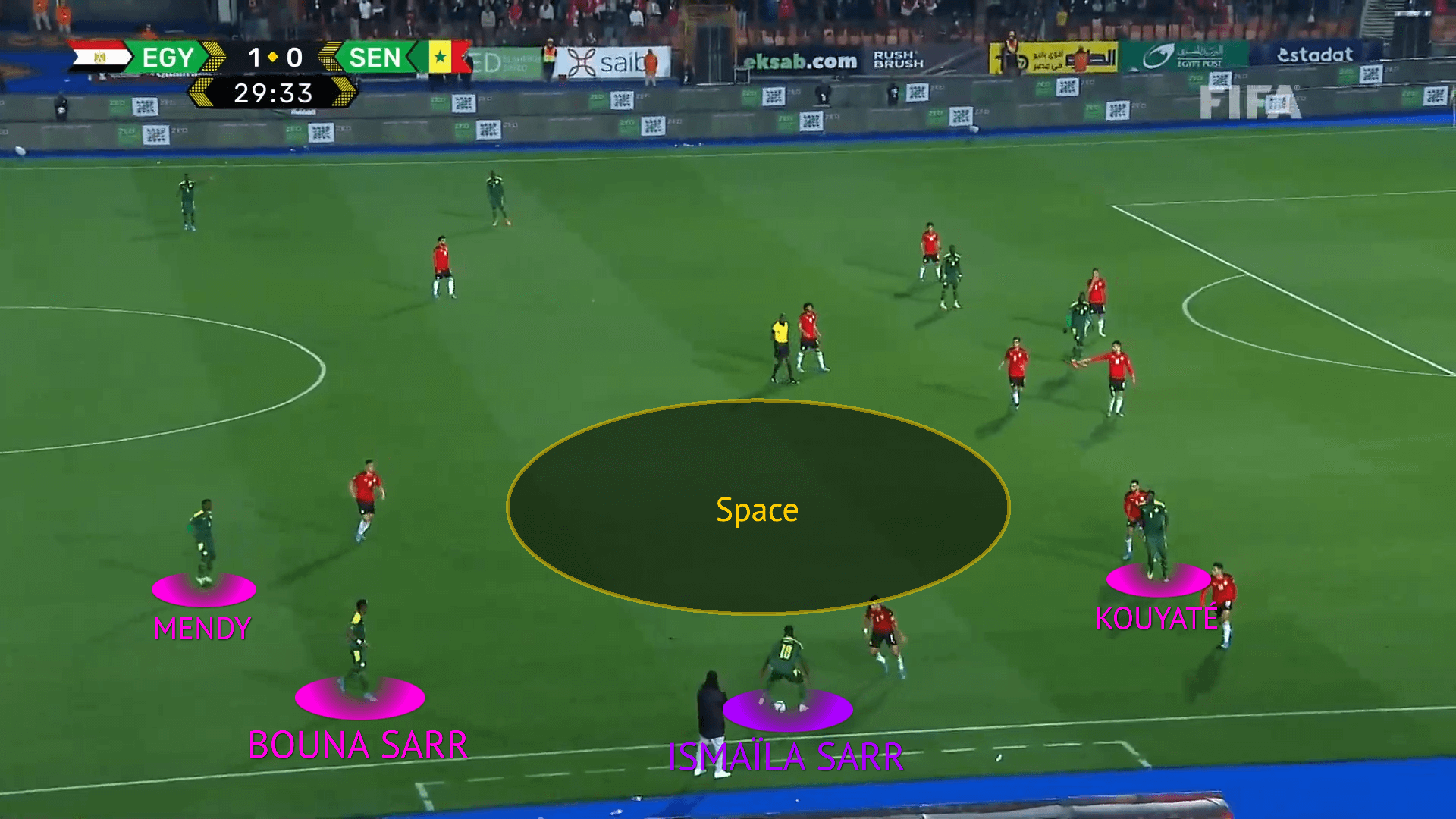 A major issue Senegal was finding was ways to progress the ball against Egypt’s defensive structure. As mentioned prior, Egypt made use of a solid man-marking defensive structure from the front, which transitioned into a 4-4-2 block. Senegal had no answer to the questions the opponents were trying to propose. The same level of dynamic movement creation of space by Egypt was reciprocated by Senegal. Because of this, Kalidou Koulibaly played a massive role in pushing the ball forward, with his long-range passing. At times, these types of passes did not come off. Overall, a large majority of Senegal’s attacks started from their captain in the back-line.

Manager Aliou Cissé understood his team needed a tactical change, which was the catalyst for his team’s improvement during the second half. Instead of the 2-2 structure during the first phase of possession, Aliou Cissé’s Senegal made use of a 3-1 structure with lop-side full-backs. Left-back Saliou Ciss would position himself higher and make use in attack positions, while Bouna Sarr would become more conservative and create the back three with his fellow defenders, Kalidou Koulibaly and Abdou Diallo. 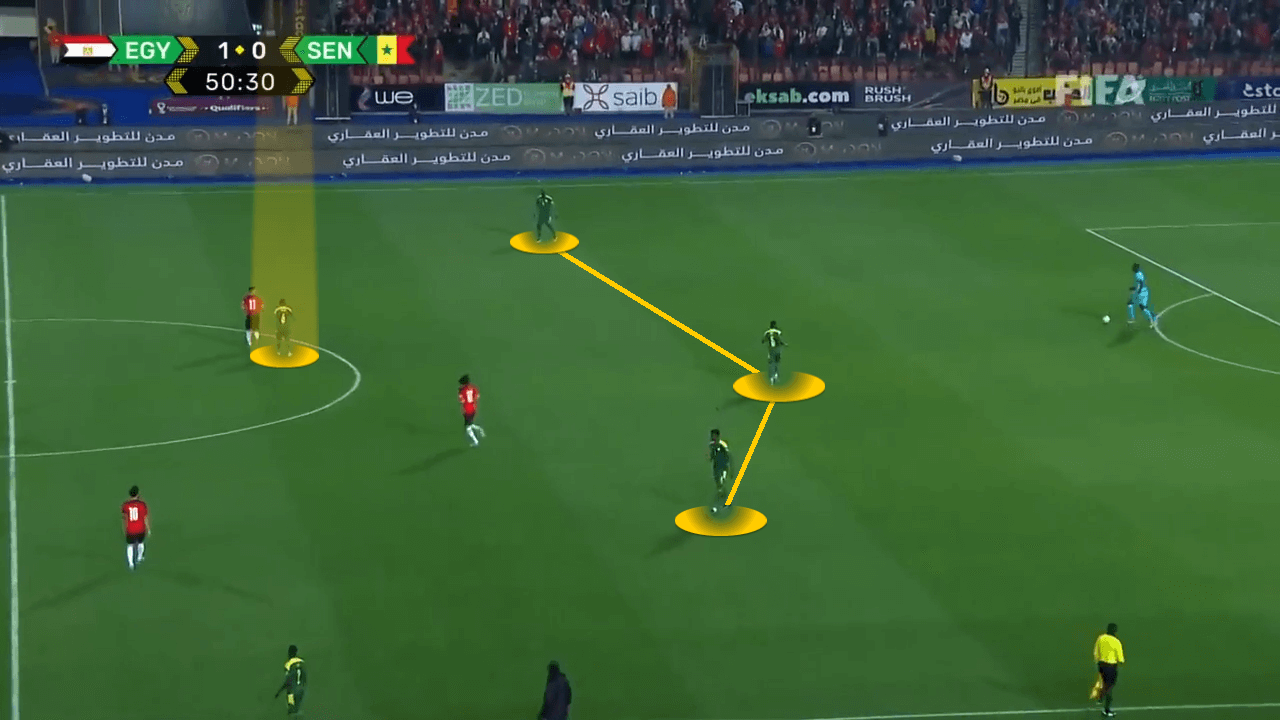 Overall, Senegal improved in many aspects of its game. The leopards could find passes through the lines to the likes of Sadio Mané, who was now positioned slightly more central, with Saliou Ciss creating width on the left-hand side. At club level, we are all aware of the threat Sadio Mané possesses when tucked in, with Andrew Robertson on the flank. During the second half, this type of winger-fullback relationship occurred, and Mané’s performance elevated.

While Senegal’s fortunes did not change regarding the shoreline by the end of the match, Aliou Cissé can take a few positives back home, upon the second leg tie. Cissé understood his team struggled to produce the quality needed to beat a side like Egypt, and because of this, made changes.

The first leg tie between Egypt and Senegal sees the two best teams in their respective continent, go head-to-head for a place in the World Cup in Qatar. Both teams know each other well, as they were both finalists within the last AFCON hosted in Cameroon. Senegal reigned supreme and Mohamed Salah-lead Egypt hope to readdress their previous loss. The Pharaohs showcased their supremacy in the first half, as they were able to create the needed space to progress, create and lead the game 1-0 at the half. Senegal was the antithesis of this brand of football. To remedy this, Senegal made a few tactical changes; the result was not affected, but Senegal could play with a sense of freedom, which will give them hope going into the next game, which will be pivotal, for both parties.