Aaron Hickey represents the next elite Scottish full-back to grace a top European League. Hickey joined Serie A side Bologna from Scottish side Hearts and has impressed so much in Italy that, as well as being linked with a whole host of Premier League teams, he is rumoured to have garnered the interest of AC Milan technical director, and club legend, Paolo Maldini.

Hickey is a particularly interesting talent, given his already impressive appearances at this level, and at only 19 years of age, whilst Hickey is truly a two-footed player although perhaps is right is minimally the stronger, and can play as comfortably at right-back as he can at left. In fact, there have been games for Bologna this season where he has played left-back, left wing-back, and right-back, all in the same 90 minutes.

He is an attack-minded full-back, which we can see from the heat-map shown below, where he has plenty of action inside the opposition half, yet he is a well-rounded player, showing defensive prowess as well. 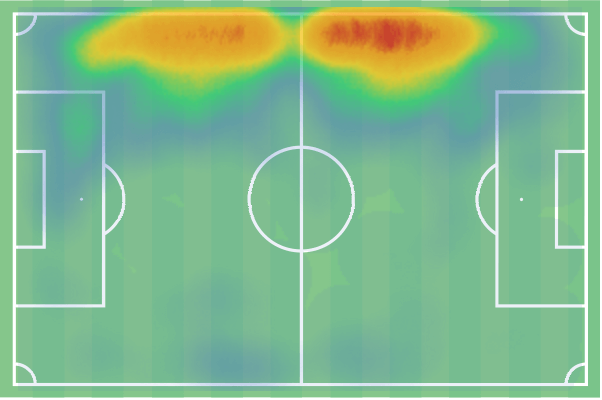 This tactical analysis and scout report will highlight some of the key areas of Hickey’s game, providing an overview as to why he is gaining so much interest from some of Europe’s elite clubs.

As already indicated by the previously shown heat map, Hickey is adventurous with his positioning and will frequently be seen taking high positions on the flank, either over-lapping the winger playing in front of him or, if operating as a wing-back, even operating as the furthest forward player on the team.

We can see such an example of this occurring in the following image where, against Sampdoria, Hickey can be seen pushing forward and playing off of the shoulder of the opposition right-back as he looks for his teammate to loft the ball in behind. 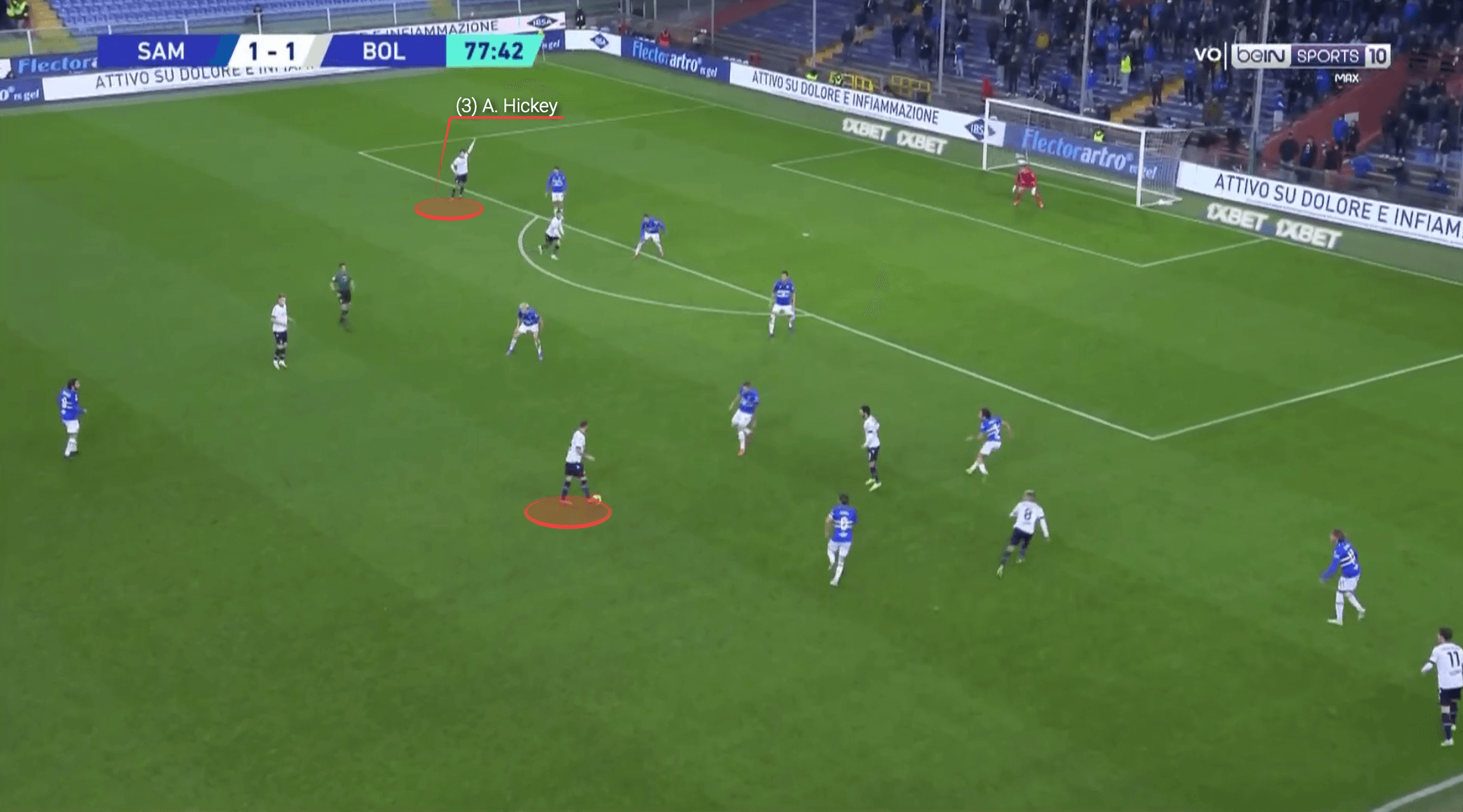 He may not always be as aggressive with his positioning as this, but Hickey is consistently available in advanced positions on his left-wing. He doesn’t step forward too quickly as the ball is initially being played forward from the back, but times his runs impeccably well, thanks to his game-reading but also impressive acceleration. This approach can lead to him receiving the ball in attacking positions in plenty of space, as we can see in the next image. 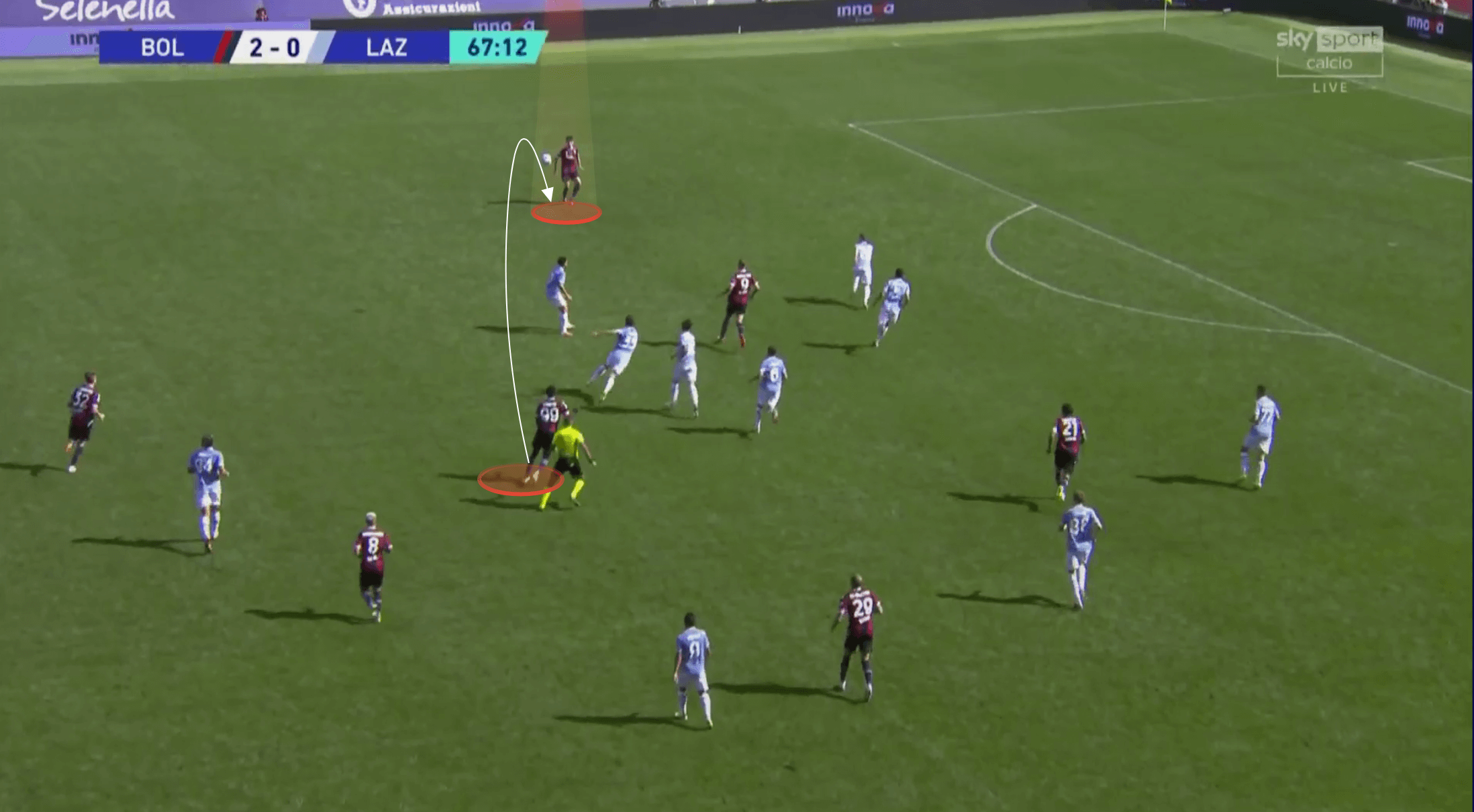 The next image shows a more representative example of Hickey’s general positioning during build-up play with the left-back wide, stretching the opposition press. However, if he sees there is space in front of him, like in this example, he can be quick to push forward and provide a direct pass option in behind. 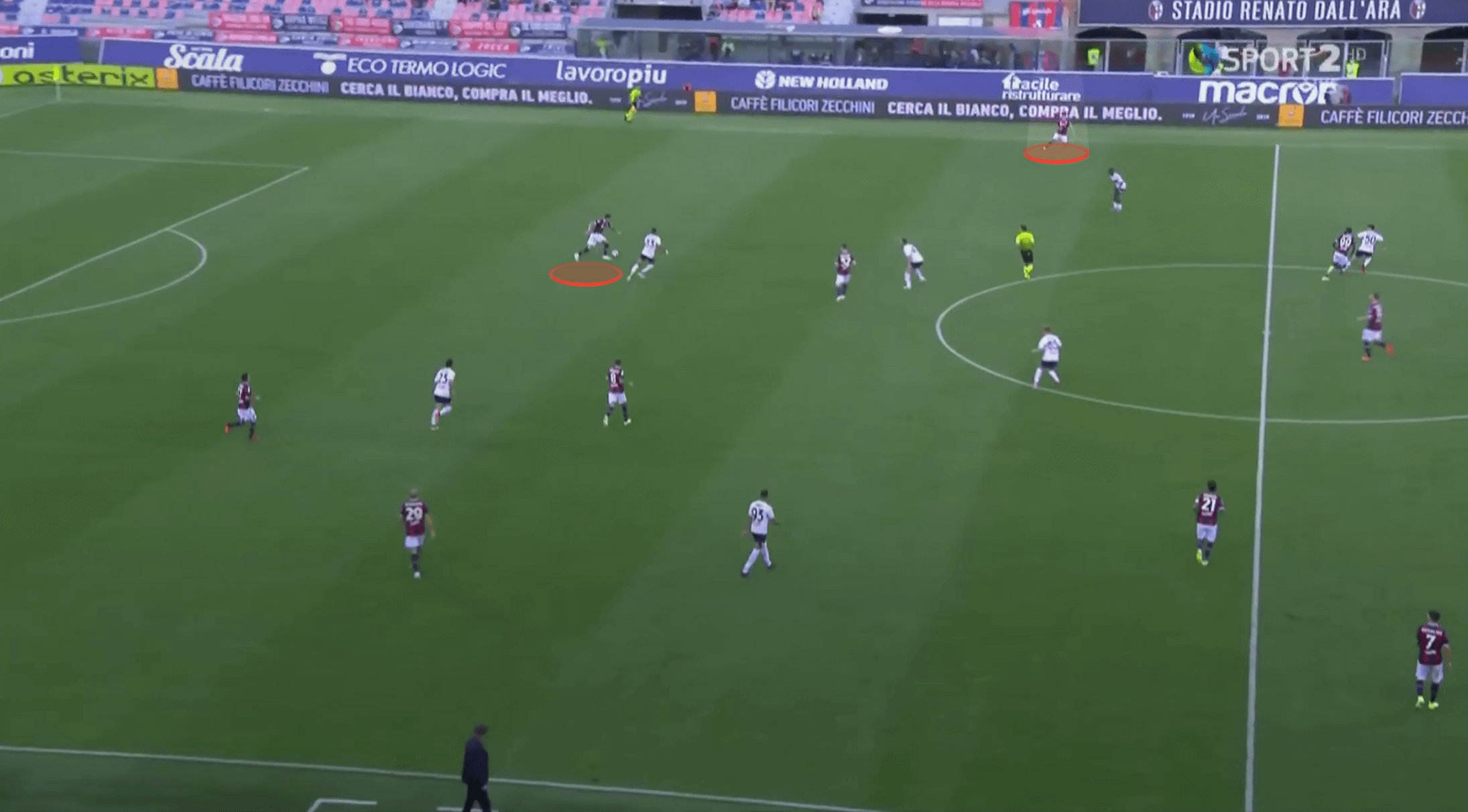 He will use the movement of an attacker inside from him to draw the opposition full-back away from this space, and this will provide Hickey with a head-start before the full-back recognises his run and seeks to recover. 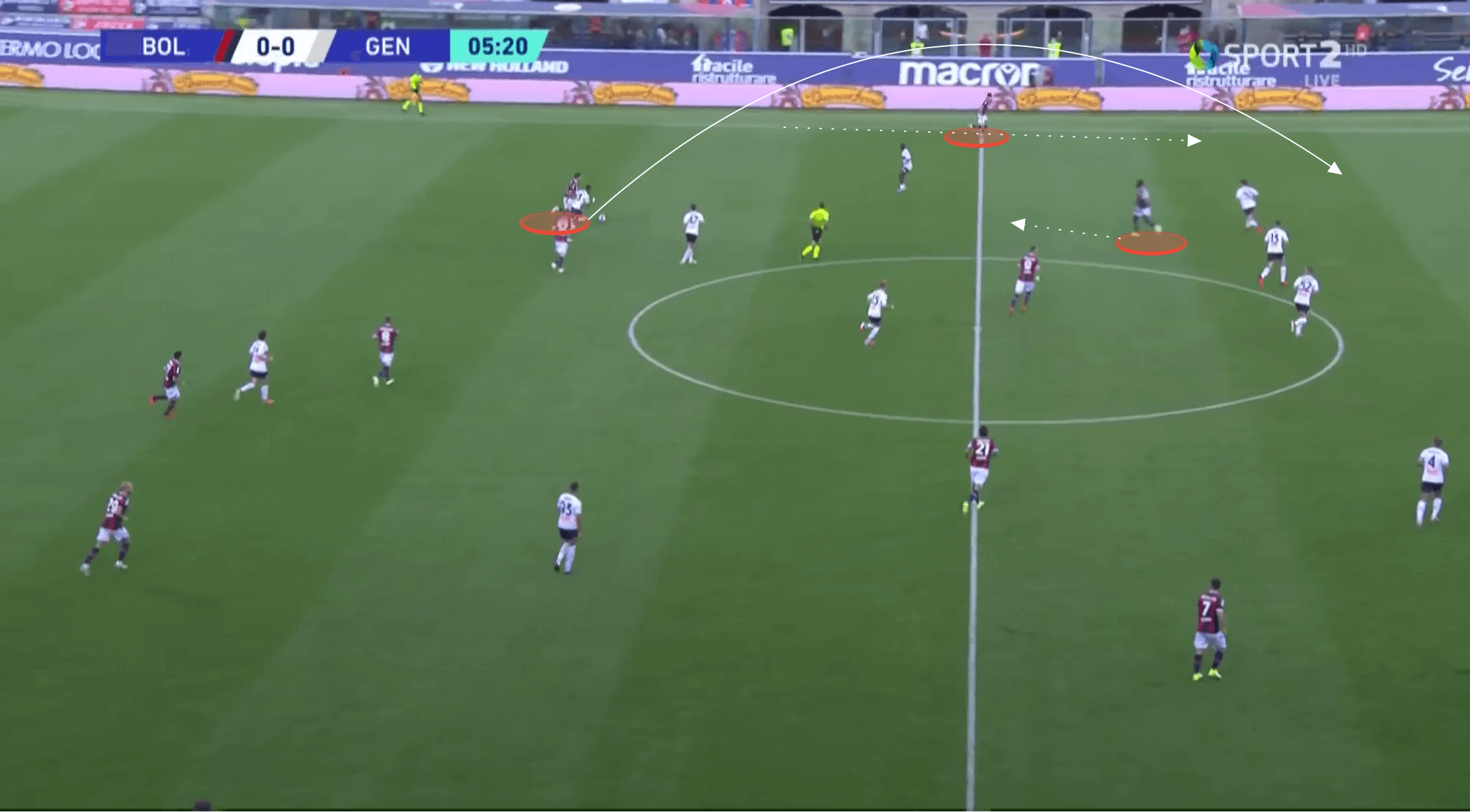 Hickey can drive down the line and cross and may take a direct approach to attacking the opposition right-back when receiving in such a position. However, given his ability on his right, Hickey can and often does cut inside onto this foot. He can cross or finish from this position and has already scored a couple of goals this season through this method. We can see him doing this in the next picture against Lazio, cutting inside before finishing from outside the area. 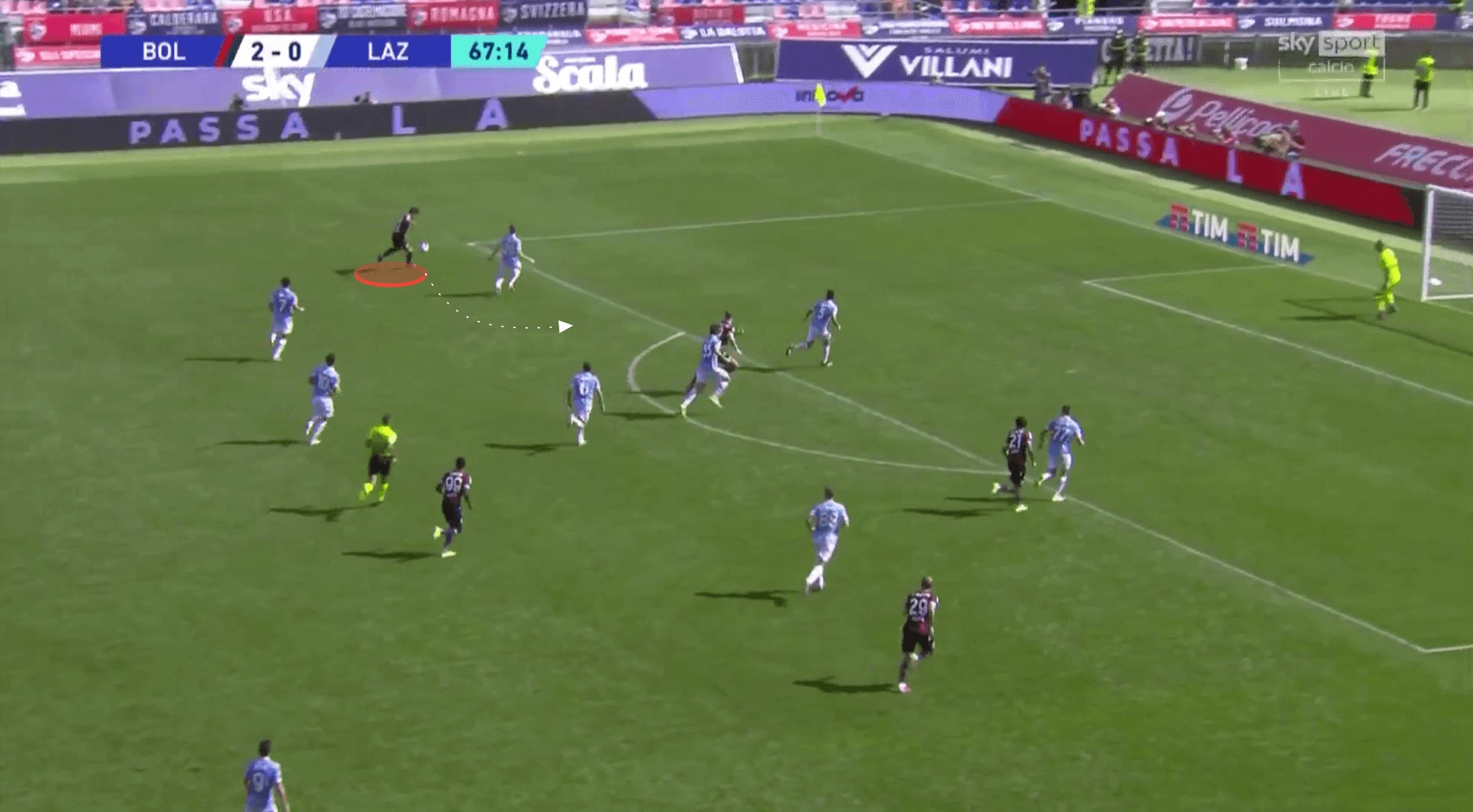 He can finish with his left as well and shows impressive power and accuracy when shooting from distance. Hickey is quick to pull the trigger in such situations, and we can see him scoring again from a similar position in the following image against Genoa. As the ball bounced free from a corner, Hickey was the first to react, sliding a left-footed effort through the crowded area into the bottom corner. 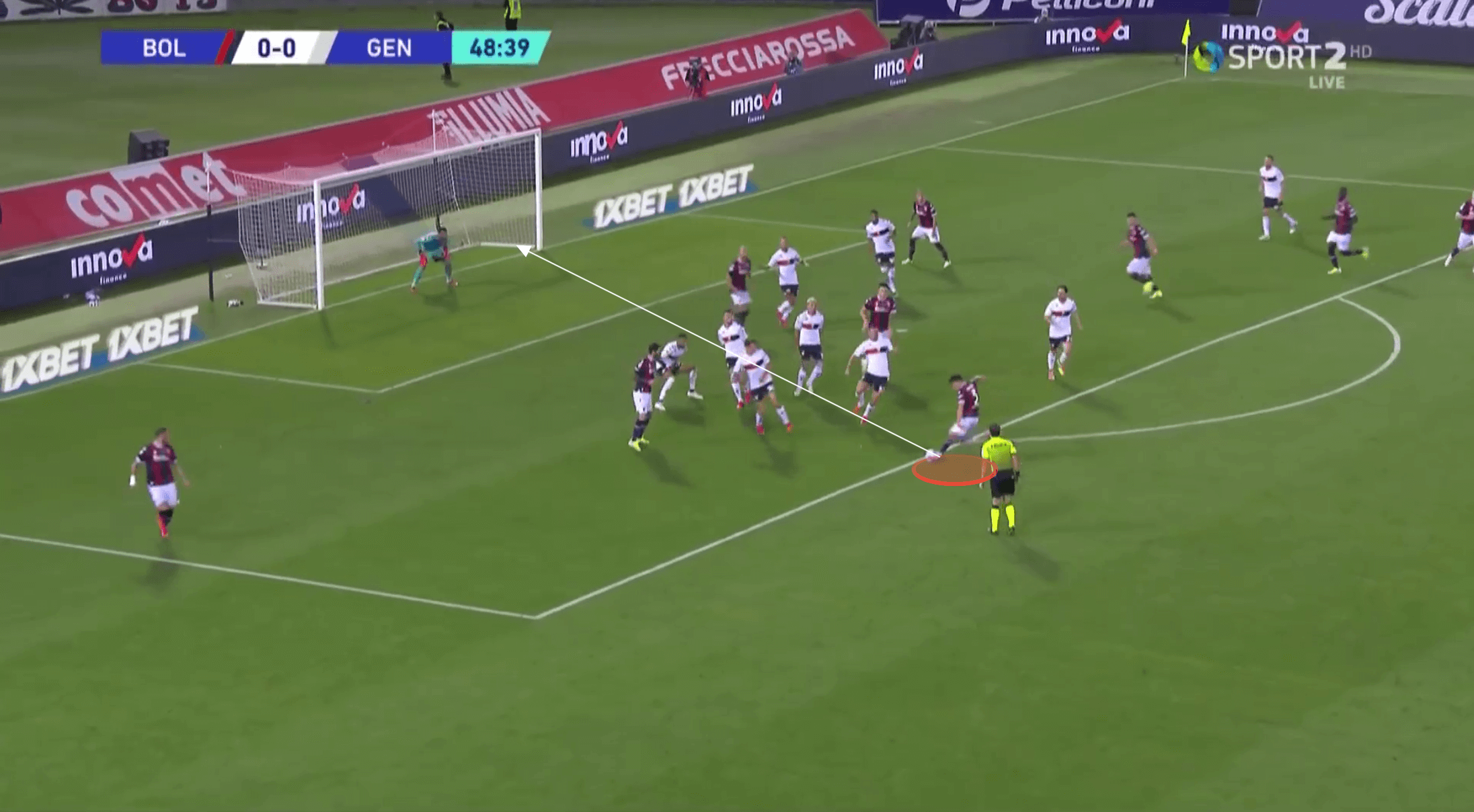 Hickey doesn’t attempt a particularly high number of crosses, but still moderately contributes to his team’s attacking efforts from out wide. This season he has averaged 1.65 crosses per 90 with a 24.4% completion – not overly impressive.

He has a habit of pulling his left-footed crosses slightly too far away from goal, and if these don’t have enough pace on them they can be easily defended.

However, he is more dangerous when cutting inside onto his right foot.

Hickey looks to shape the ball towards goal, and admittedly can still struggle for accuracy, but he has created some excellent chances and even goals from this approach this season. 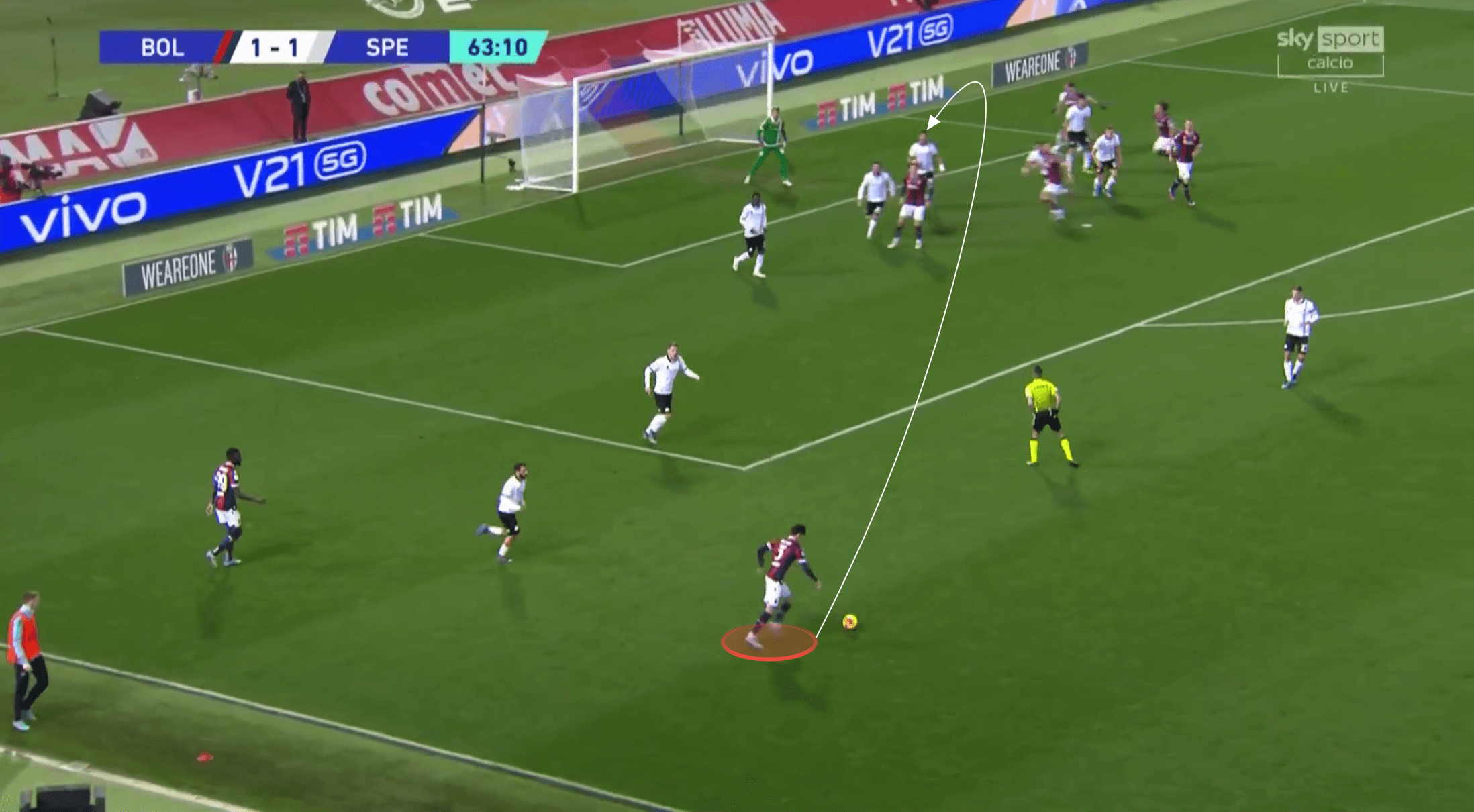 He notched an assist in an away fixture against Salernitana earlier this season, after receiving the ball in a trademark high position down the left side of the pitch. Cutting back on to his right, Hickey had enough space to pick out centre-forward Marko Arnautovic with a perfectly weighted pass over the closest centre-back for the Austrian centre-forward to head home from 12 yards. 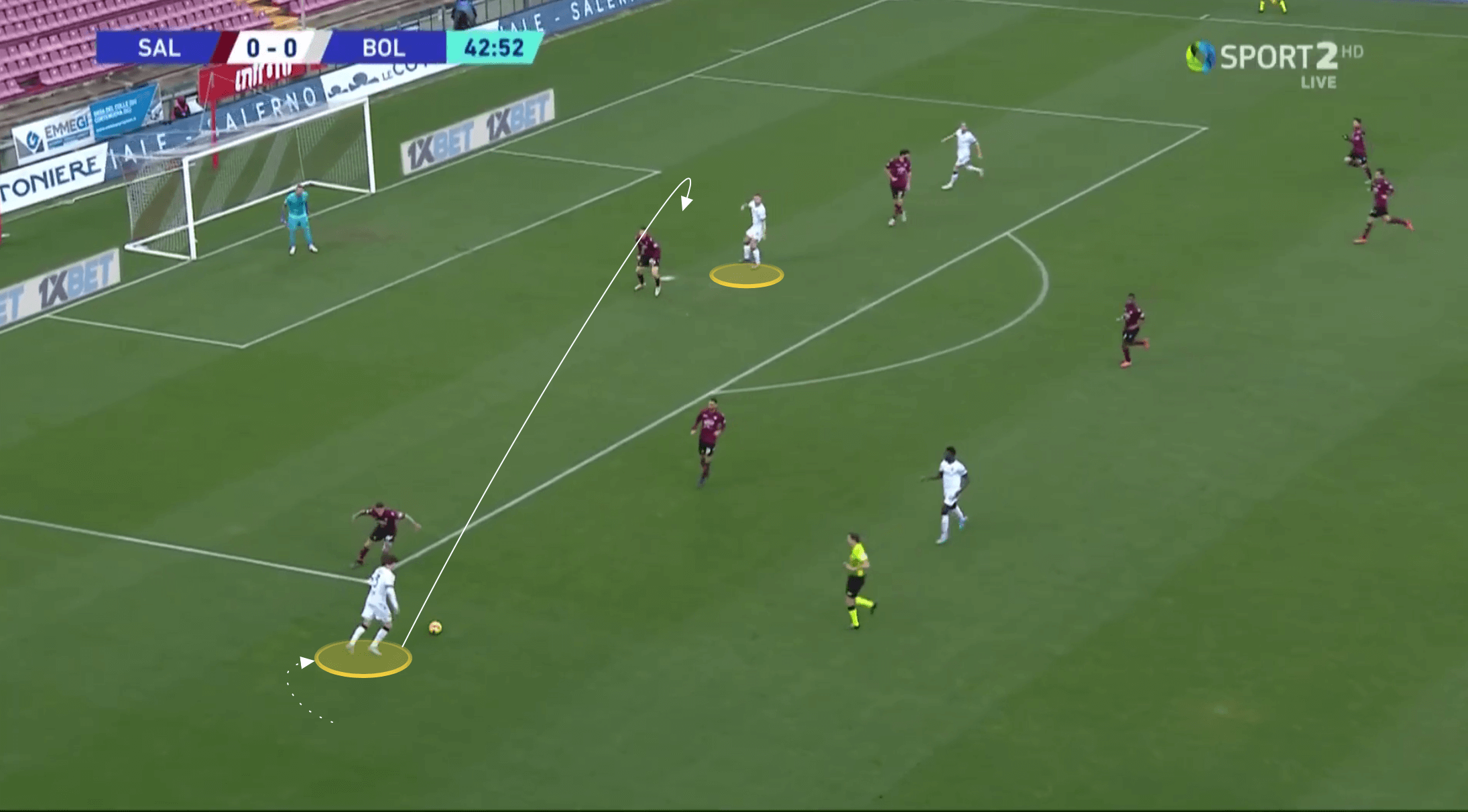 There are very few defenders in world football who are Hickey’s age and defend with such confidence, consistency and quality. He has won just over 56% of his 7 defensive duels and has averaged over 4 interceptions per 90 as well. He is comfortable defending in isolation in a 1v1 duel against a winger, but has strong positional sense as well and is rarely seen getting dragged away from the rest of his defence, whilst he frequently sweeps in behind and covers his inside centre-back.

Hickey takes a measured approach in key defensive situations and has both quality pace and strength, with the latter noticeable for a slim player albeit one who stands at 6’1”. He is effective at stepping in between the ball and the dribbler, using this method inside his penalty area to prevent having to risk making challenges.

We can see this occurring over the following two images as the Fiorentina ball-carrier cuts inside, aiming to split Bologna’s defence. Hickey reacts to this and quickly gets to the player in a side-on position. 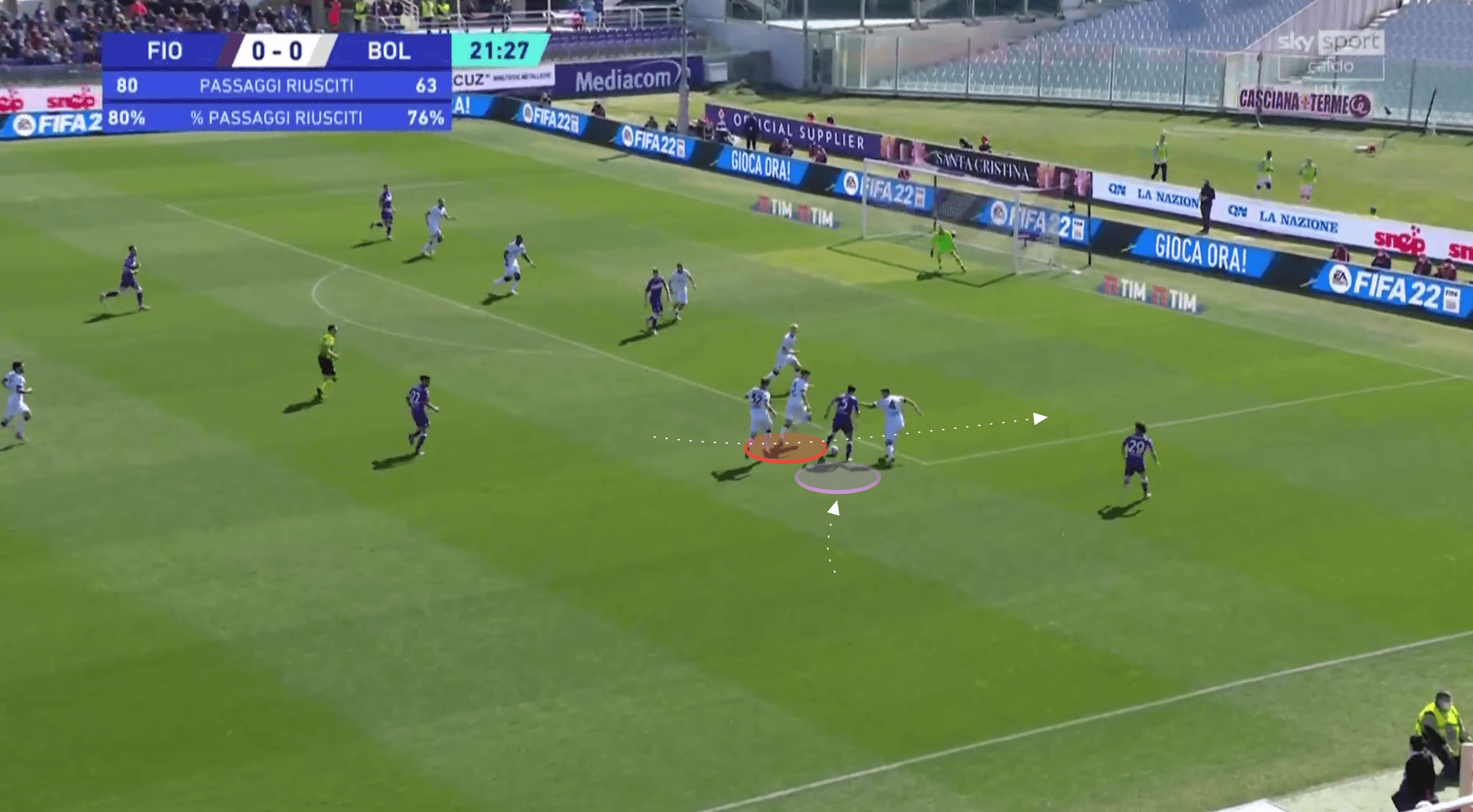 He then quickly steps entirely in front of the opponent, separating them from the ball, and cutting out the attack. 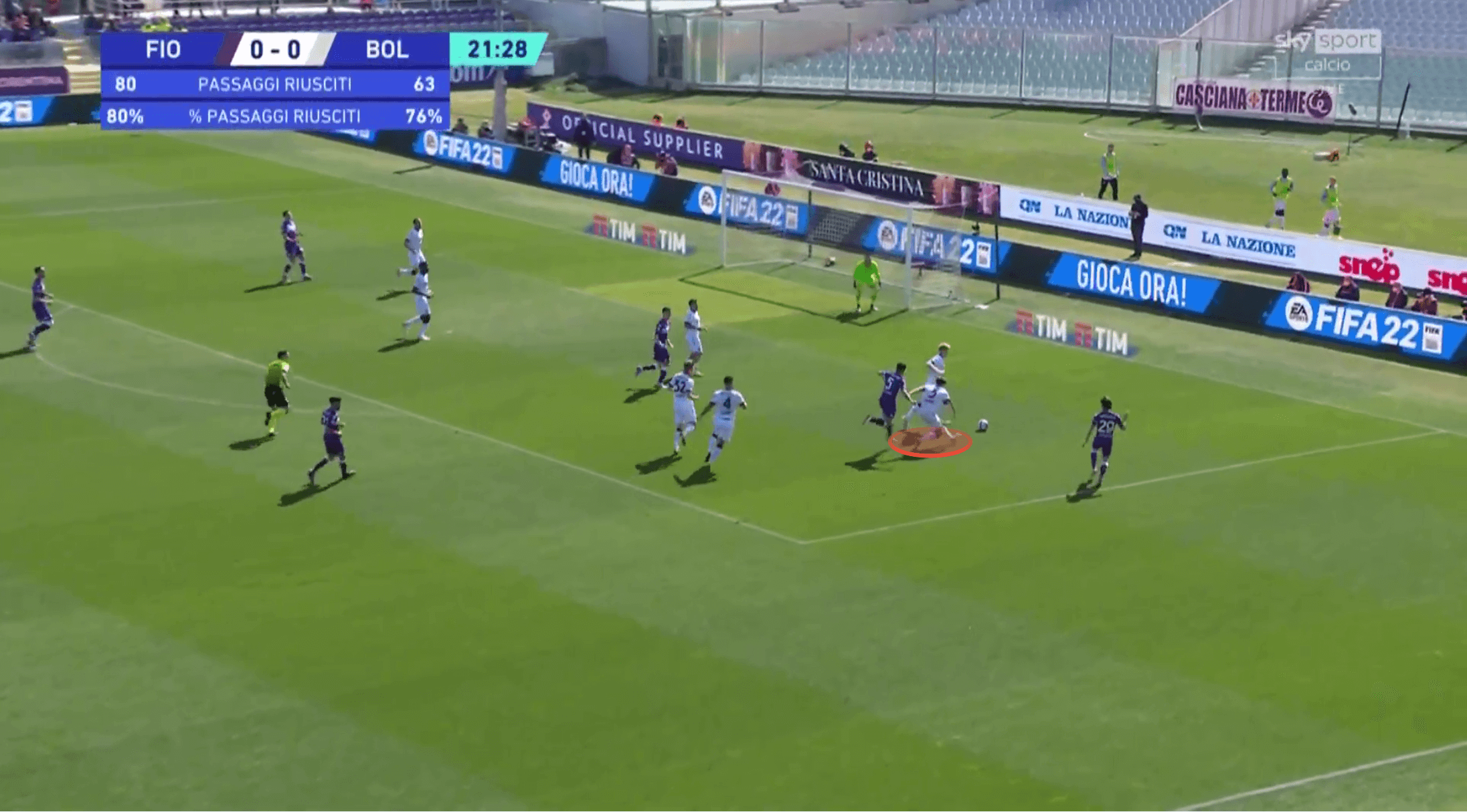 Hickey has excellent positioning in terms of his orientation in relation to the ball. He may initially start slightly wider from his centre-back than others might feel comfortable, but will show the ball-carrier inside, as he does in the image shown below, whilst preparing himself to cover this space, already almost facing his own goal despite his head position. In doing this he looks to force the pass in between his centre-back and himself where he feels comfortable that he can react to the pass first, whilst in this example he is also ready to cover his centre-back should they step forward to engage the ball-carrier. 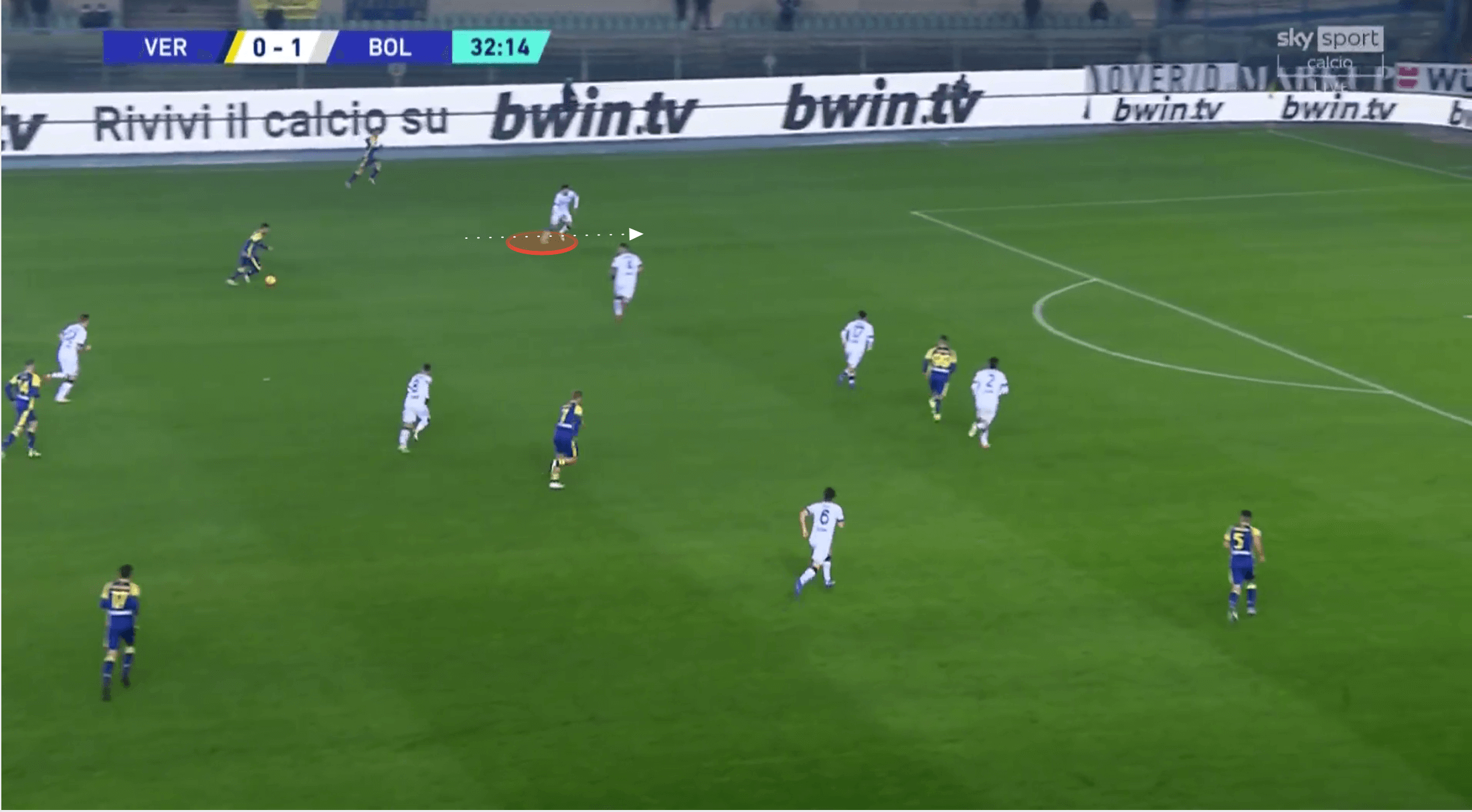 However, in this instance the ball-carrier still plays the pass out wide and Hickey quickly changes his position to face outside, but still side-on. When engaging a player in a 1v1 situation such as this, Hickey very rarely dives in. He stands up, with an upright upper body, but still has bent knees and is ready to change direction if necessary. But in standing up he is able to react and often block attempted crosses from these positions. 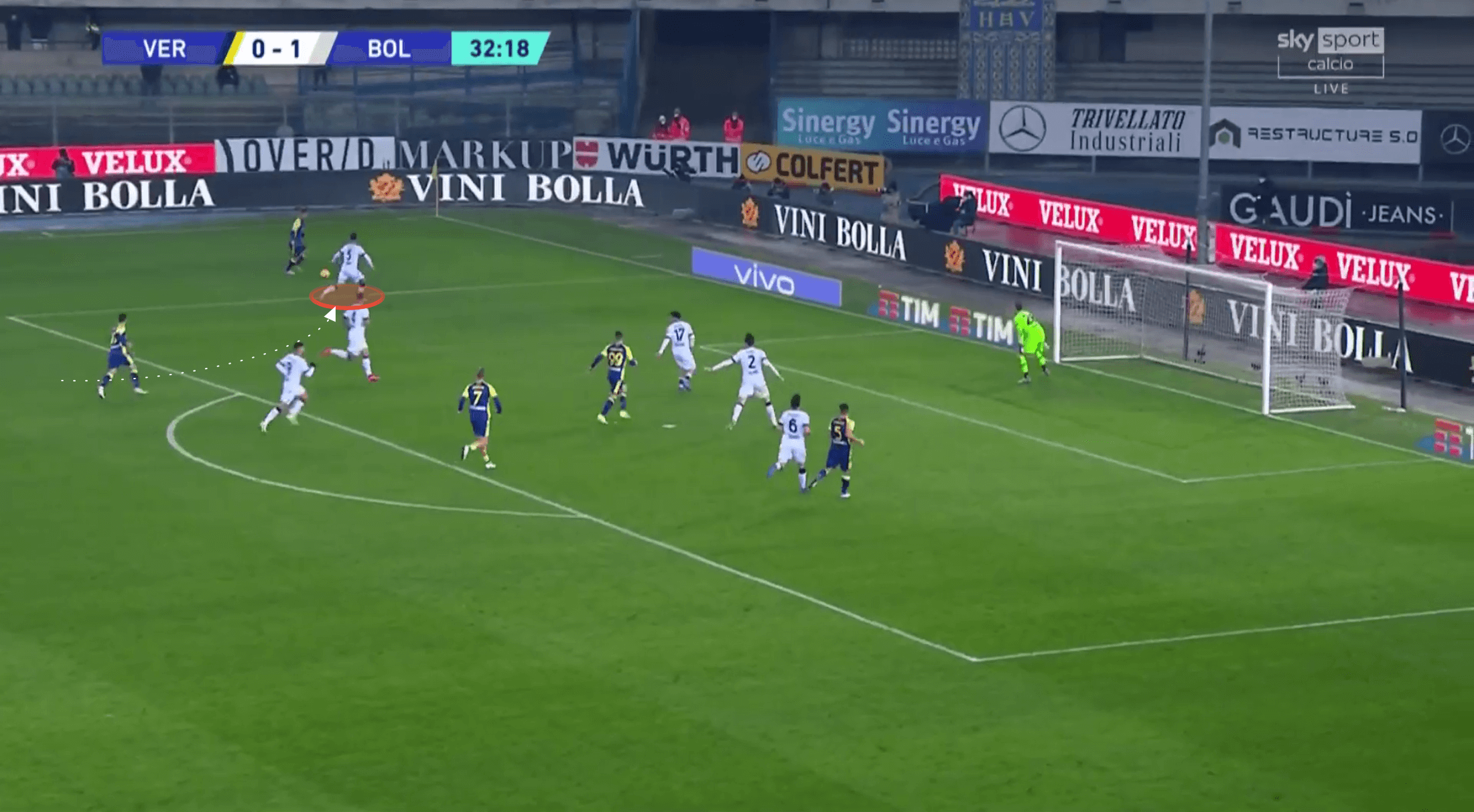 Yet once more in this specific analysis we see Hickey’s defensive ability as the ball-carrier opts to cut onto their right-foot. Hickey has a quality change of direction and is able to quickly adjust, get to the ball once more, and make the block. 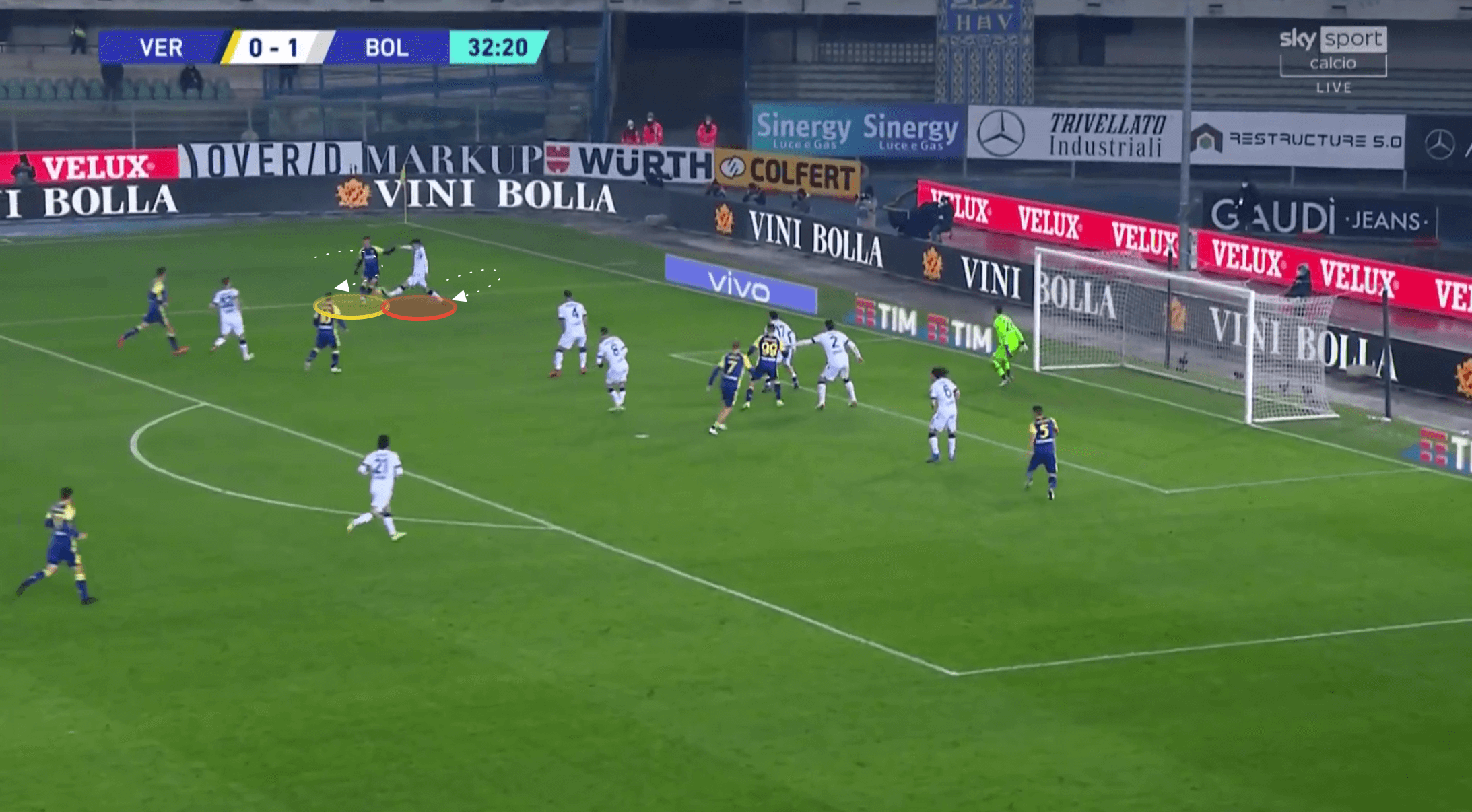 Hickey would suit a team who are versatile with their tactics, given his ability to play as a full-back on either side or as wing-back. His high positioning in attack is only a positive, especially as he is quick to track back on defensive transition, but he does need to improve the variety and accuracy of his crossing. However, despite this, it shouldn’t be understated that he is a very technical player that is very comfortable in possession, and in general well-rounded in the possession phase. Defensively he has clear quality as well, both when defending in isolation and when doing so as part of the team unit.

It’s likely too early to give an indication on his ceiling, but with Milan’s rumoured interest, and Hickey publicly declaring his desire to play at the San Siro it seems likely that this will be his next move. Scotland once more have another outstanding defensive talent on their hands, and with the emergence of Nathan Patterson and Calvin Ramsay, on top of the stalwarts Kieran Tierney and of course, Andy Robertson too, it might be a headache to fit these players into a starting XI – albeit a headache Scottish football fans will no doubt warmly welcome.