Franck Kessié left his native Ivory Coast when he was 18 years old. He had already made appearances for his country at senior level before he made the move to Italy in 2015. Despite some struggles adapting to Italian football, the 24-year-old has become one of the best midfielders in Serie A.

Kessié might have drawn the ire of Rossoneri fans in the past but the Ivorian has developed into one of the club’s unsung heroes. While a player like Ibrahimović might grab the headlines, the central midfielder frequently goes about his business without the need to seek attention.

Off the field, there has been speculation regarding his future at the club. His contract expires in June 2022. Media reports suggest that AC Milan was offering him €6.5 million but he reportedly wanted €8 million per season.

That is why Barcelona’s string of free signings is rumoured to be continuing with the Ivorian midfielder. The 25-year-old is a recognisable name, but with his Champions League debut coming only this season, he has not quite had the eyes of most fans truly analysing and scrutinising him.

As such, this tactical analysis in form of a scout report will provide some insight into Barça’s potentially newest midfielder. In this analysis, we will discuss Kessie’s role in Stefano Pioli’s AC Milan tactics, what his strengths are, and how he could fit in at Camp Nou.

Kessié has worked with four coaches at AC Milan – Vincenzo Montella, Gennaro Gattuso, Marco Giampaolo, and Stefano Pioli – and he has truly thrived under the latter. Giampaolo was employed in the early stages of the 2019/20 campaign but the squad struggled to fit into his 4-3-1-2 formation.

Under Pioli, Kessié has featured in a double pivot in midfield beside Algerian international Ismaël Bennacer. The Ivorian does the ball-winning in the middle of the park while Bennacer controls the play from deep positions and the duo have complimented each other nicely. 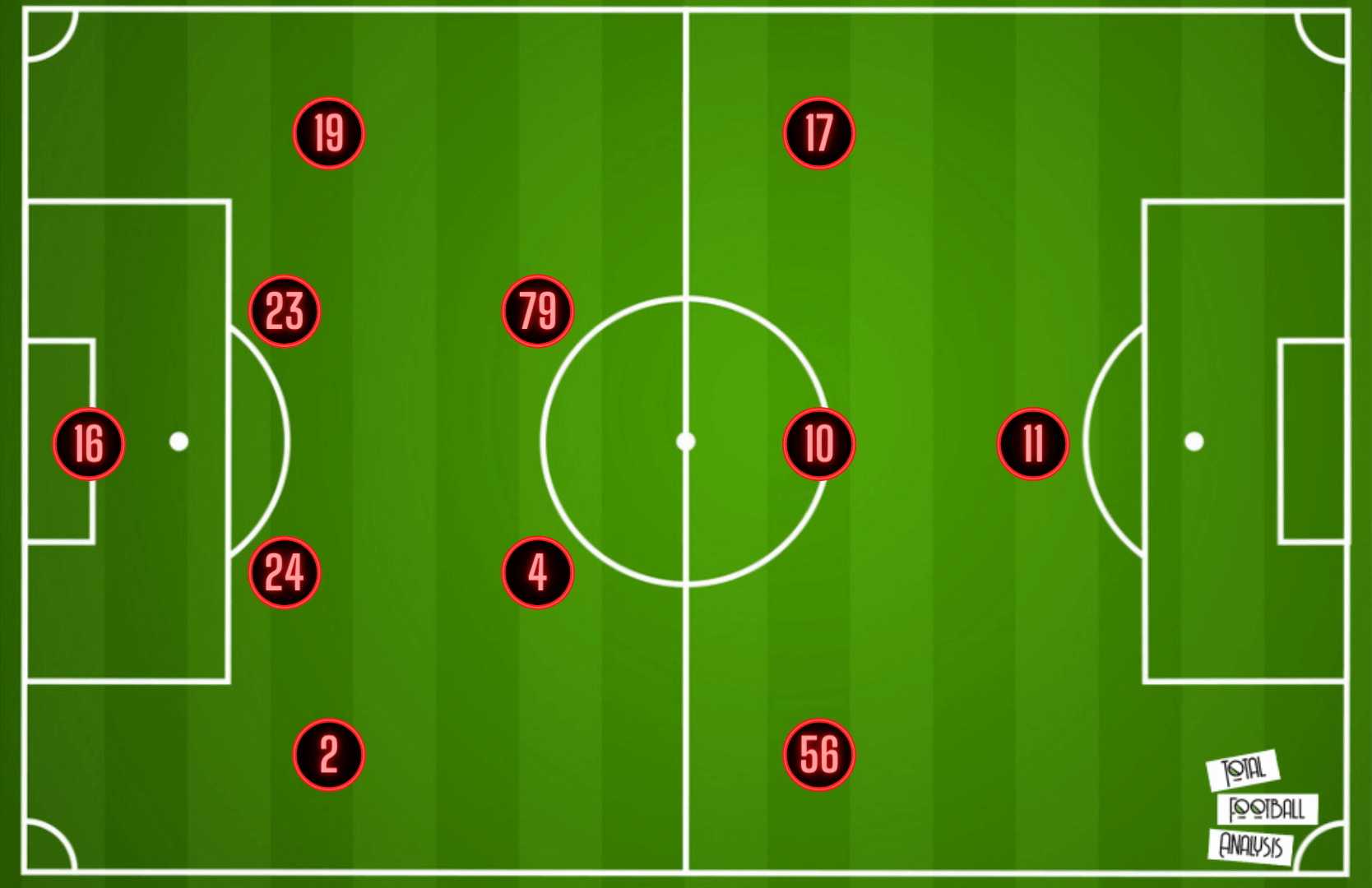 Kessie mainly operates as the left half of the team’s double pivot. When building out from the back, he initially helps form a box or 2-2 structure with the centre backs. 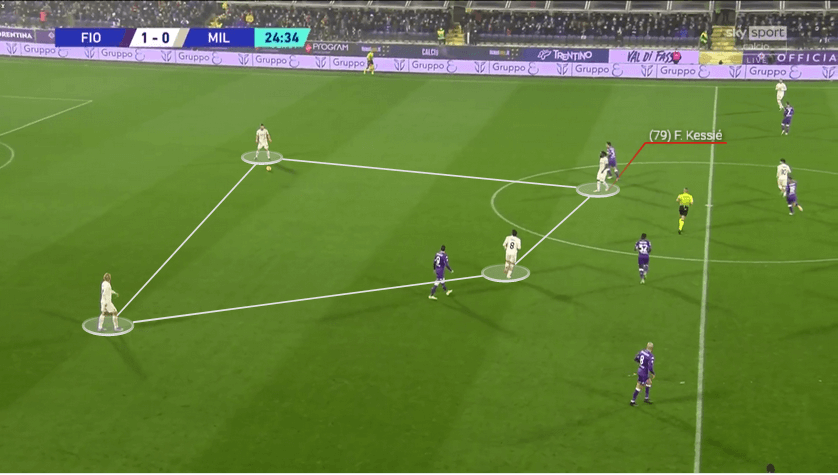 However, Milan will eventually drop one of those midfielders between the centre backs, creating more of a 3-1 structure. There are matches when Kessie drops into that deeper role – like the derby against Inter – and others where he stays higher – like this match against Fiorentina. 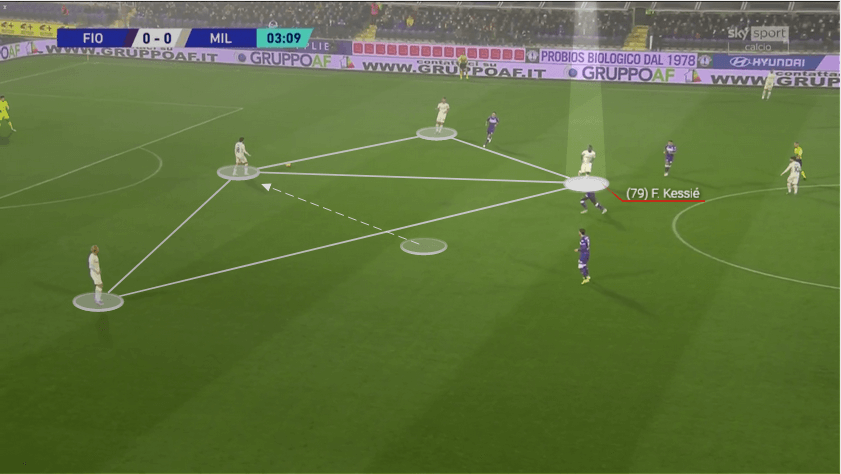 The Ivorian tends to be pretty involved during the deep build-up, but he does not shoulder much progressive responsibility. In Serie A this season, Kessie’s midfield teammates Sandro Tonali and Ismael Bennacer average much more progressive passing and carrying distance, in addition to spreading play more often with long passes. The Ivorian international would also be tasked with taking the penalties at AC Milan, especially when Zlatan Ibrahimović was not available.

In general, the play runs through Kessie pretty quickly and easily, but he does not really run the game itself like Sergio Busquets does, for instance. Still, the Ivorian retains possession, puts up at least respectable progressive numbers, and can occasionally burst away from pressure.

He lacks the world-class power and speed over distance of a Frenkie de Jong, but Kessie can utilize a few quick touches to create space for himself. This can be seen in the situation below with the midfielder receiving a pass from his left while having open space to his right. He then drives into that space, keeping his body between the defender and the ball. This eventually allows him to make an easy pass into the final third. 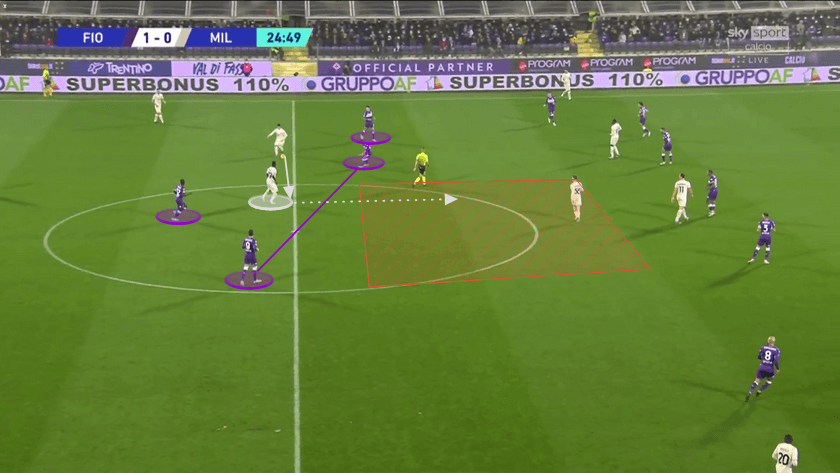 Kessie can also get quite advanced positionally during sustained Milan attacks. In the last calendar year, he is in the 90th percentile of midfielders in the big five leagues for touches in the attacking penalty area per 90. 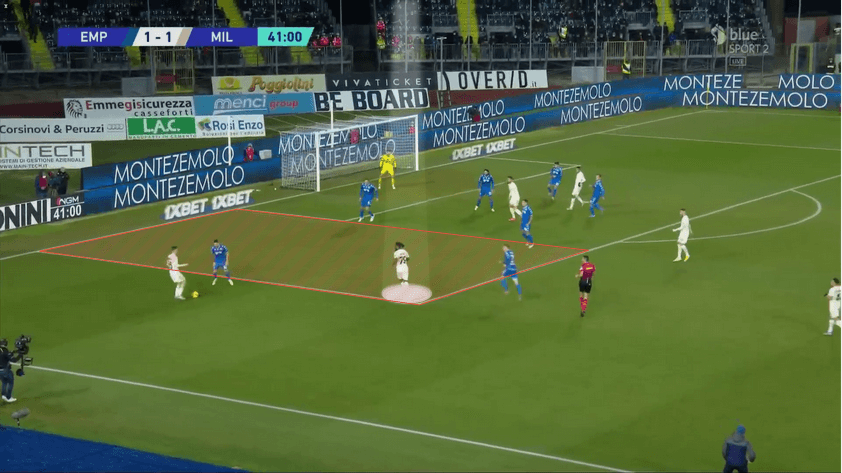 Most of his dangerous touches and shooting chances do not come from real powerful, penetrative runs beyond the forward line as we have seen from Frenkie de Jong. Instead, Kessie relies more on subtle positioning – drifting into a pocket between defenders or arriving at the edge of the box for a layoff. 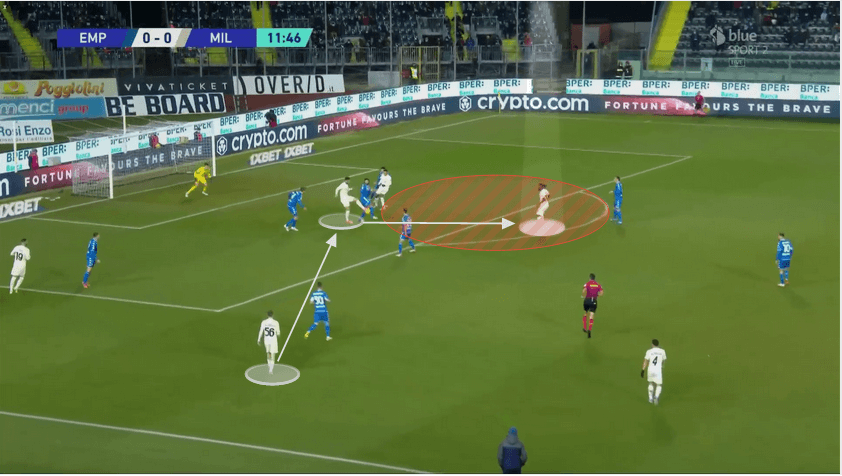 One of the only clearly noticeable weaknesses in Kessie’s on-ball game is his long passing technique. When attempting to loft the ball into a teammate, the Ivorian tends to float his passes too much.

When you are just trying to send the ball towards a static target man, this can work. However, it often leads to interceptions with a moving target who you are trying to actually send in behind.

Overall, Kessie in possession is someone who can do a bit of everything, and he does. Boiling down his attributes into one descriptive archetype would probably get you a well-rounded possession retainer. He can move the ball quickly, he can dribble and he can provide some attacking threat, but he is not a game-breaker on his own.

Without the ball, Pioli’s Milan side press high up the pitch with great intensity. They average the most pressures in Serie A in the attacking third and in the middle third per 90, even though they tend to be pretty possession dominant.

Kessie often plays a key role in this pressing by stepping out to join Milan’s forward players. The side’s first wave of pressure tries to funnel the opposition’s play down the centre, where he and others are ready to aggressively close down on the ball. 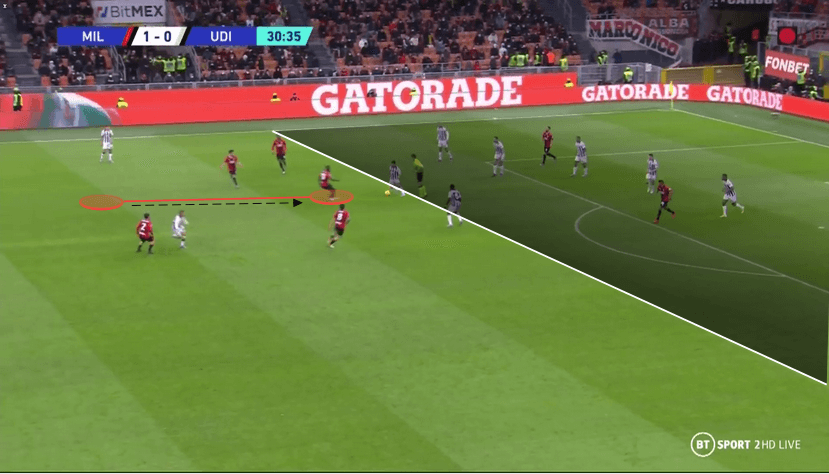 As such, Kessie often ends up trying to disrupt play from the opposition’s deep-lying midfielders. Only attackers Alexis Saelemaekers, Zlatan Ibrahimovic, and Brahim Diaz average more final third pressures than the Ivorian in the Milan squad.

Overall, though, his defensive quality is very hard to judge on the surface. The 25-year-old actually makes very few tackles and interceptions and certainly does not remind you of an elite ball winner like N’Golo Kante when you tune in to a match.

That said, Kessie is mobile enough, shows good strength in duels, and possesses some quite impressive positional discipline. Perhaps no match has been a greater testament to his defending than his performance against rivals Inter in November.

The Ivorian was essentially responsible for marking Nicolo Barella man-to-man. If anyone has watched the Italian midfielder play, they are aware of how dynamic he can be. Kessie was more than up for the challenge, though. He made it tough for Barella to receive the ball, tougher to keep possession, and almost impossible to move the ball forward. We can run through one very impressive sequence that encapsulated Kessie’s performance on the day. As the Italian receives the ball, Kessie immediately presses from behind, which forces Barella to turn back towards his own goal. 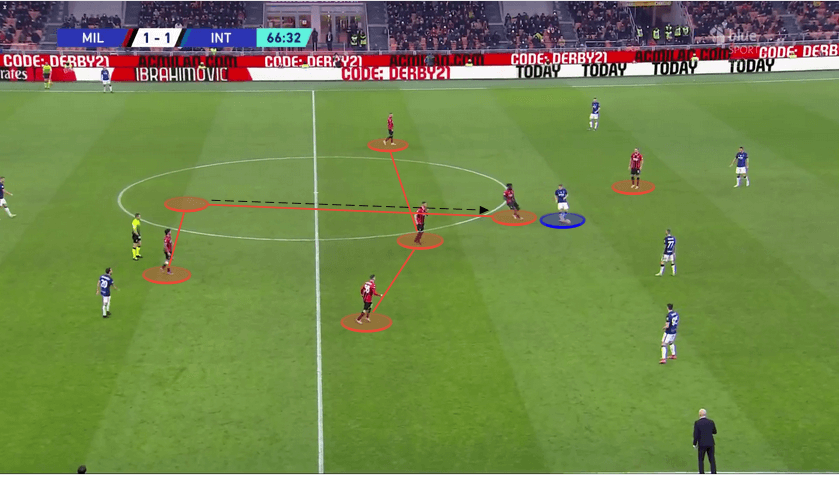 Kessie stays composed and moves his feet well, as Barella attempts to play back. Barella finished the match with just 83 progressive passing yards and 91 progressive carrying yards. These tallies were his second-lowest and lowest in a Serie A match this season, respectively. In the situation below, you can see again that Barella has no option to receive the ball and turn to play a progressive pass. 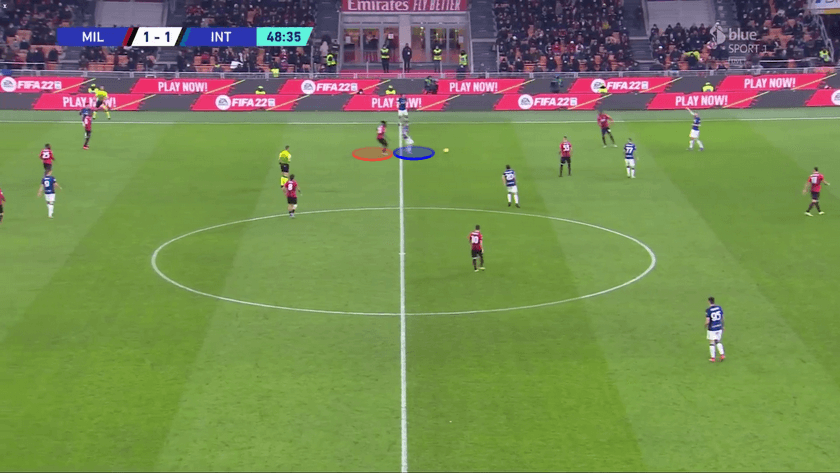 So, while Kessie finished the game with the sole tackle and two interceptions, it was a great example of the elements of his defensive play that go beyond rudimentary metrics.

Would he fit at Barça?

It is certainly hard to imagine Kessie being a poor signing. Bringing in a midfielder who is 25, well-rounded, and has a very impressive injury record seems like spotless business as long as wages are kept in check. Kessie could certainly do a job against most La Liga opponents, too.

Still, though, this would have to depend on whether or not Xavi feels the need for another body in midfield.

Kessie level is arguably not one that would really elevate the squad as a whole or justify taking many minutes away from Barça’s young core. Thus, Xavi’s vision is really the key here.

If the manager is planning for life after Busquets (5) and/or the departure of Frenkie de Jong (21), Kessie would provide some great squad depth with his jack-of-all-trades style. Especially if this plan included a shift to a double pivot.

If Xavi kept with more of the traditional 4-3-3 with a single pivot and two interiors, Kessie would be much more suited on the left. He is not quite the needle player who can operate between the lines like Pedri (16), but would be better there than taking on the distributive responsibilities of the lone pivot role. 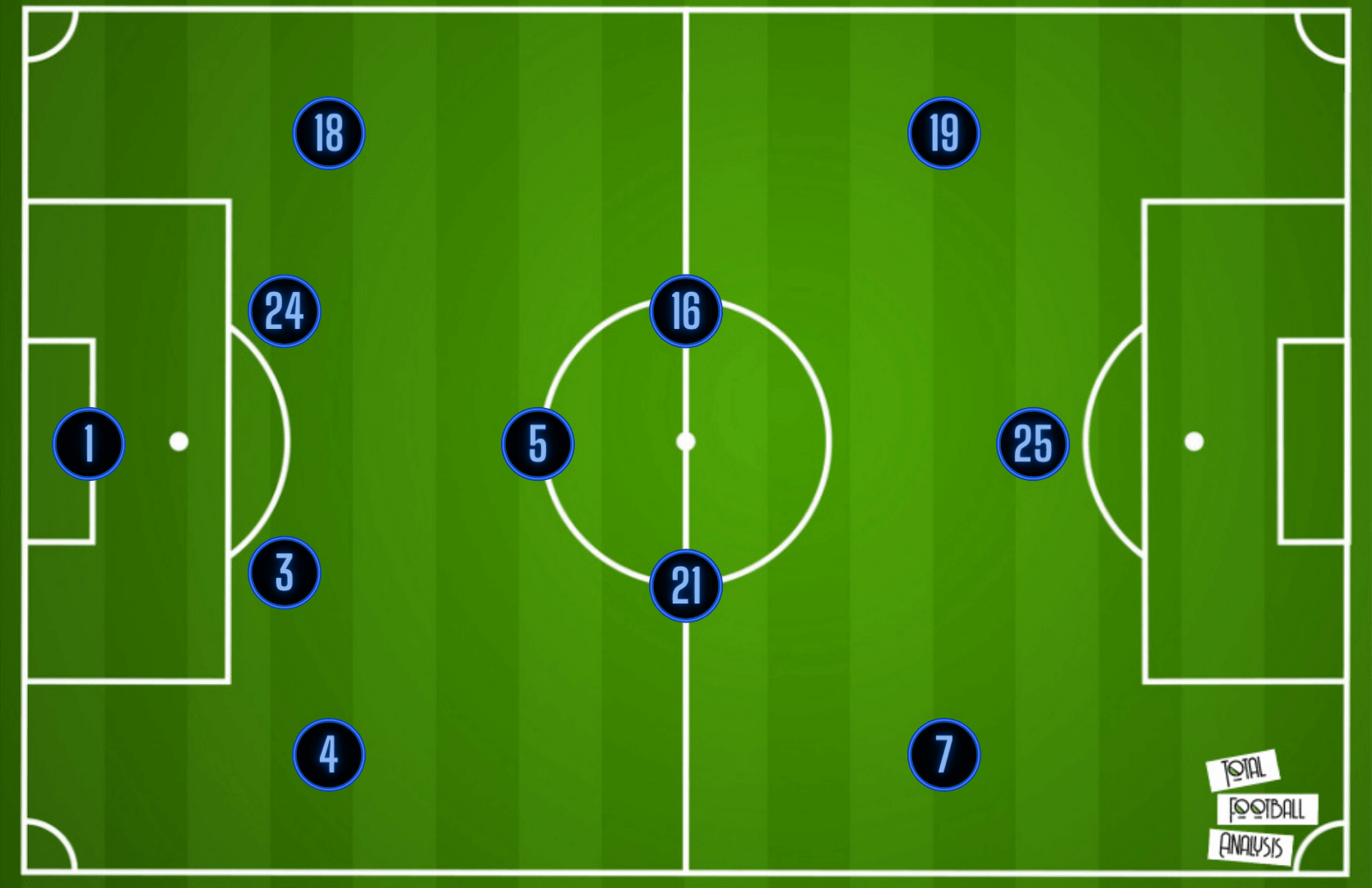 Additionally, it is important to note that Kessie’s role in Milan’s high pressing matches pretty well what Xavi has asked from the likes of Gavi. The Ivorian would not have to adjust much to performing that task of joining the forward line and pressing high into the attacking third.

To summarize: the 25-year-old is certainly not an elite ball winner, but can be used as a high-pressing engine and shows discipline in deeper areas. He does not tend to leave his position open irresponsibly, he is willing to track runners, and he does well in the harder-to-measure areas of defending.

As mentioned previously, everything on Kessie’s part points to his signing being a smart bit of business for almost any club.

He is accustomed to possession and high pressing, is headed into his prime years, and he can do many things at an impressive level. If he is brought to the Camp Nou, though, it should not be expected by fans – or Xavi – for him to be a world-beater who massively elevates the side’s level.