AFCON kicked-off on Sunday, January 9th, 2022 in Cameroun with the host country facing Burkina-Faso and winning with difficulty while Cape Verde won against Ethiopia 1-0. The second day witnessed some other good matches with Senegal beating Zimbabwe, Guinea beating Malawi and Morocco winning against Ghana in the toughest match of day two. It should be said that Senegal’s first match performance wasn’t too convincing despite facing one of the most suitable teams for an opening of the competition. Moreover, Gabon won against Comoros to be at the top of Group C at moment and share the top spot with Morocco.

Day three’s games saw the current champion of the tournament struggling to win against Sierra Leone, the team that was successful in stopping Algeria with powerful defending throughout the match. In fact, Sierra Leone were even close to scoring on several occasions. And in a much more complicated match, Nigeria were able to grab three important points against Egypt, their direct opponent in Group D, winning 1-0 with Egypt being in complete confusion almost throughout the game, whether in defence or in attack.

In this tactical analysis and scout report, we will be picking out the best, remarkable and influential defensive performances, tactics and skills so far, while analysing the defensive mistakes and weaknesses of certain teams as well.

We will begin with Sierra Leone’s impressive defensive performance against one of the most dangerous attacking teams in Africa. Algeria have got an offensive line composed of Olympique Lyonnais’ Islam Slimani, Manchester City’s Riyad Mahrez, Youcef Belaïli, Yacine Brahimi and Sofiane Feghouli. Sierra Leone were still able to stop these players attacking attempts with an organised defensive structure composed of Osman Kakay, Umaru Bangura, former Tottenham and Liverpool’s Steven Caulker and Kevin Wright. But in fact, Sierra Leone’s defensive resistance was maintained thanks to the efforts of the whole squad who usually retreated completely to their own half whenever Algeria were in possession. Furthermore, Mohamed Kamara was the star of the match since he saved all the seven shots attempted by the Algerian players in this match. 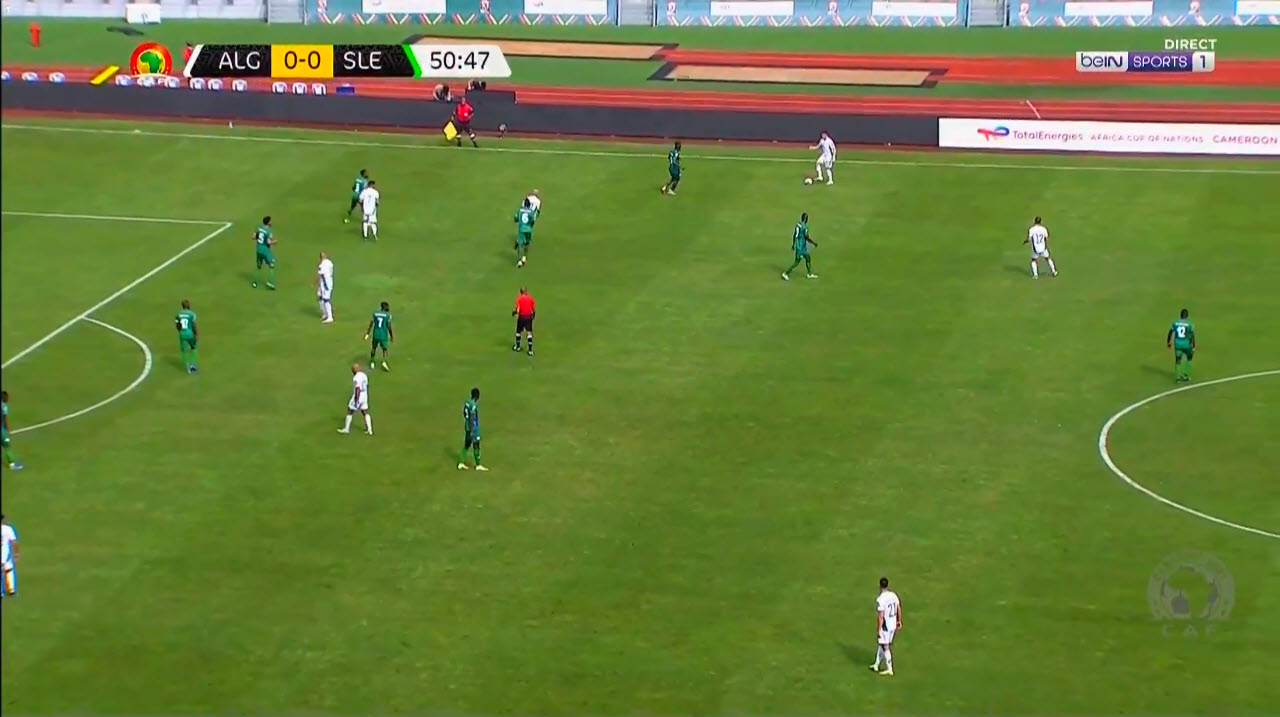 What was even more impressive is that his saves were exceptional and showed a lot of character and confidence. One of these saves was made with a diving header as an anticipatory action as soon as he noticed that an opponent could reach the ball before him. Such movements and decisions not only give a boost for the team but can also cause some signs of doubt and lack of concentration for the opponents. 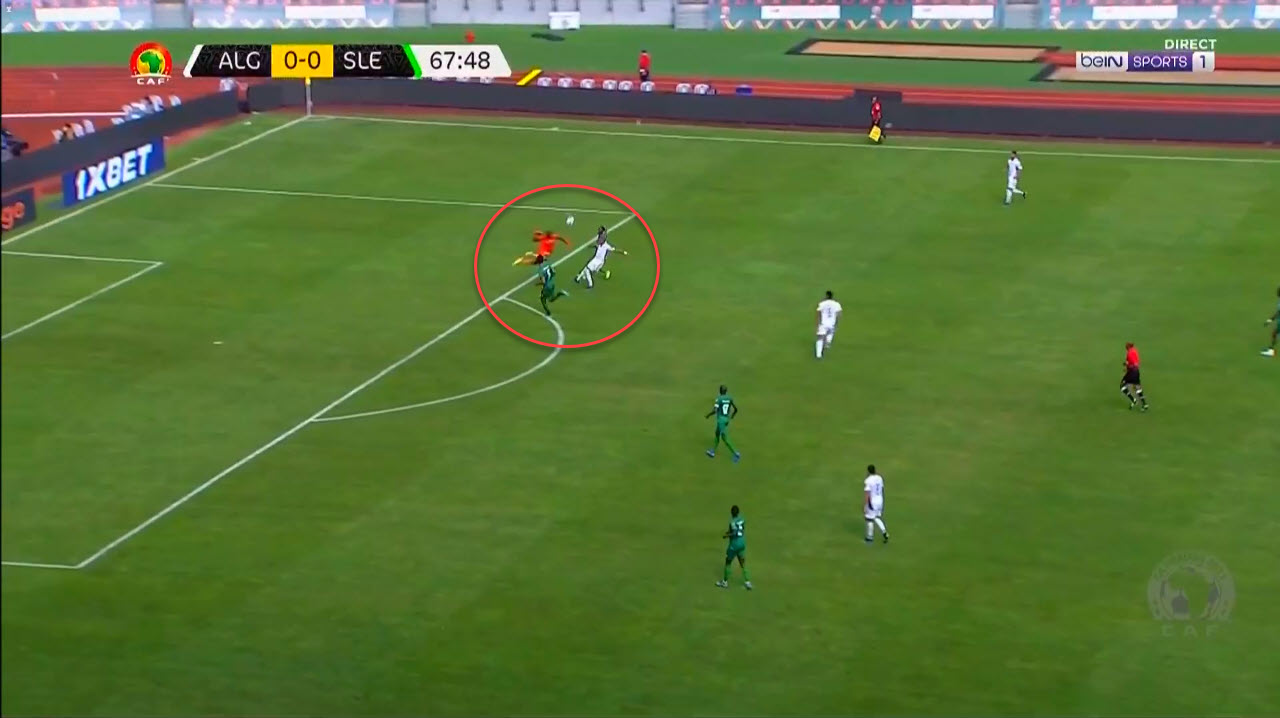 At the same time, Algeria risked a lot during this game since they gave away many chances to Sierra Leone and could have easily conceded one or two goals. Algeria’s main defensive problem since the Arab Cup and until today is in aerial duels and in defending during set-pieces. Sierra Leone were able to threaten Algeria on several occasions through crosses and headers as they won 52,73% of all the duels. In this example, you can see how Sierra Leone’s striker was able to put his body intelligently in front of his marker in order to shoot, knowing that his physical abilities allow him to exploit such opportunities. Algeria’s defender however wasn’t intelligent enough in this action since he left too much distance between him and his opponent initially and wasn’t decisive enough in his intervention, allowing the player to shoot easily. 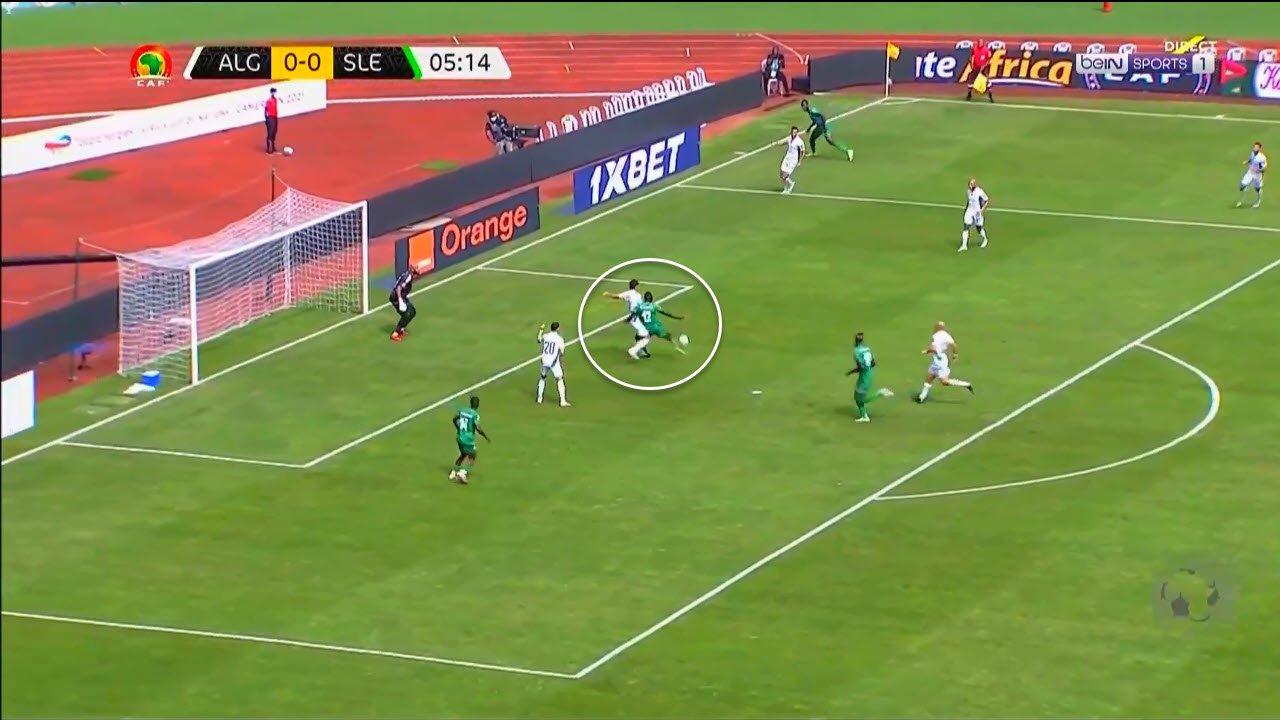 Apart from Mohamed Kamara’s exceptional saves that kept Sierra Leone in the match, Caulker’s outstanding interceptions and sliding tackles saved the team from various scoring chances for Algeria and the most decisive intervention was in the 67th minute when he deviated his opponent’s shot, preventing it from going inside the net when Kamara was outside his goal. 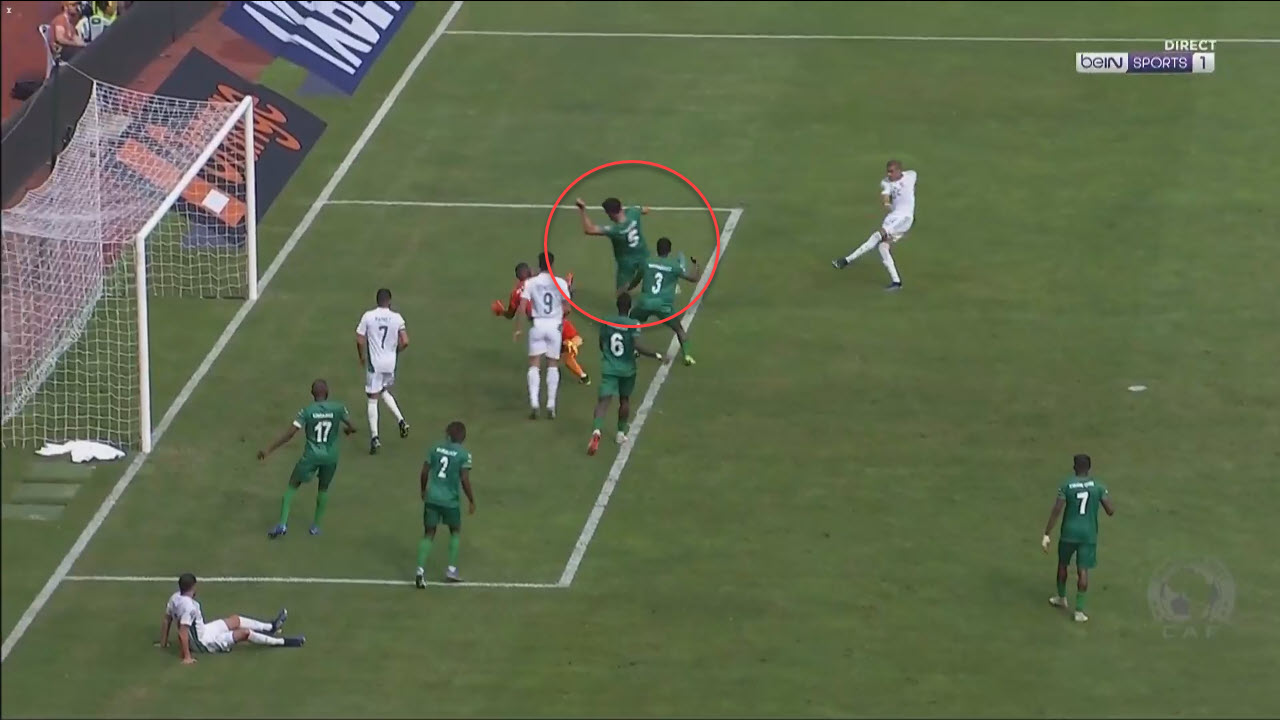 In the opening match of the tournament, both Cameroun and Burkina-Faso committed several defensive mistakes given that the match was relatively open with 12 shots attempted by Cameroun and 10 by Burkina-Faso. The match was very physical and Cameroun’s attacking players were able to penetrate into Burkina-Faso’s penalty area frequently thanks to the individual efforts of players like Vincent Aboubakar, the scorer of Cameroun’s two goals and the player who got through three defenders in this action to find the space for shooting with ease. Burkina-Faso’s defence needed to be much better in such opportunities and their marking of Aboubakar needed to be tighter to avoid such dangerous occasions. 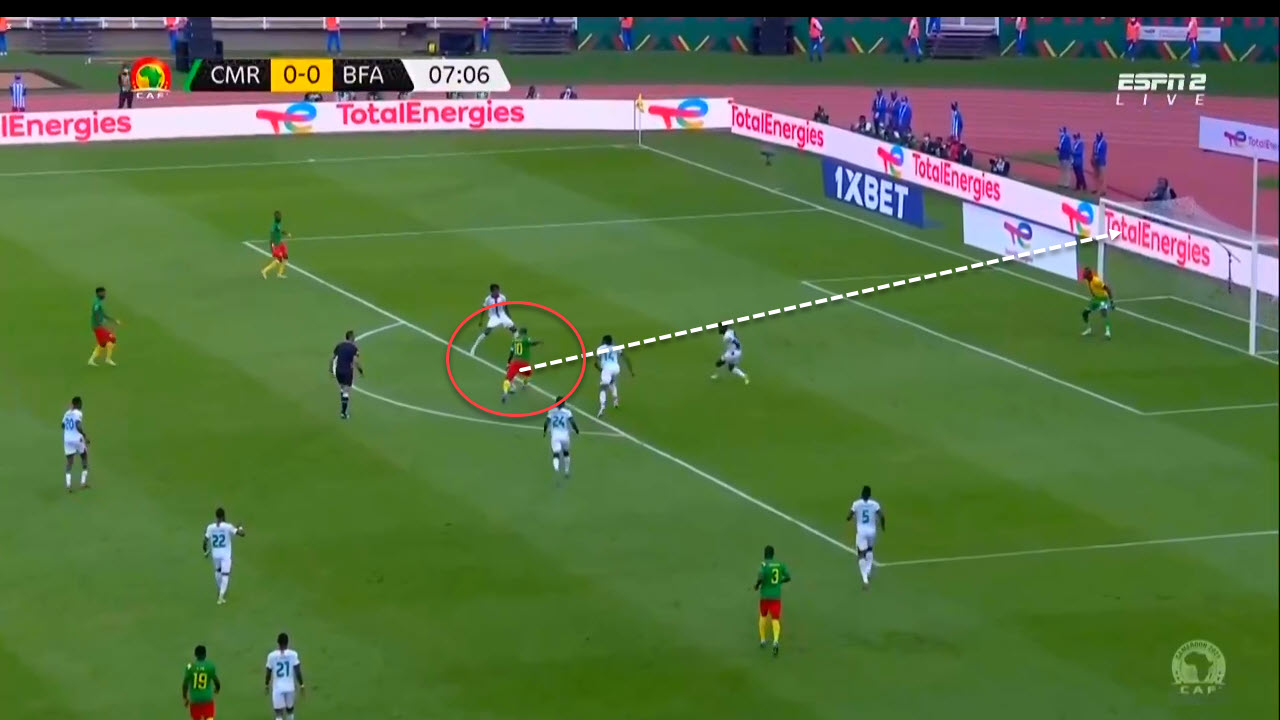 But at the same time, Cameroun will need to fix a lot of things in terms of defence since they committed numerous mistakes in set-pieces and specifically in marking. In this goal action, Burkina-Faso found their way to Cameroun’s goal thanks to Gustavo Sangaré who found himself completely unmarked when his teammate was about to cross from the right-wing. 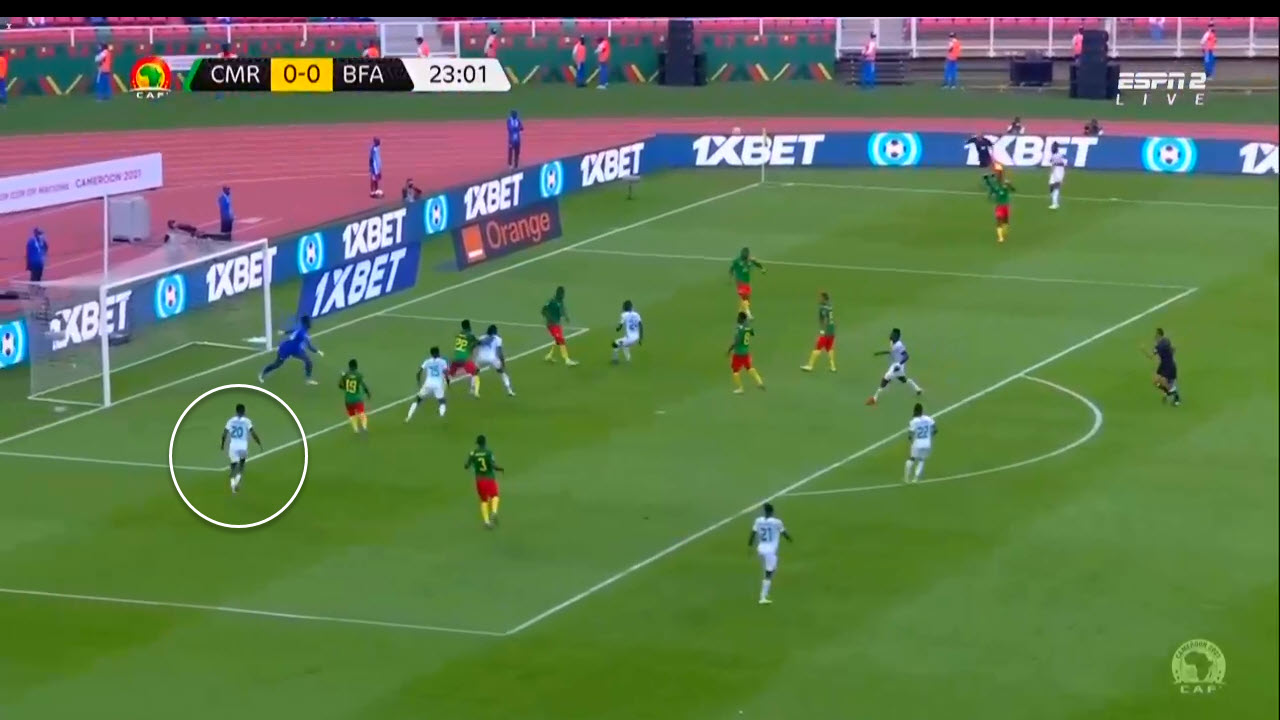 Egypt had different defensive and attacking problems during their encounter against Nigeria but their most impactful mistake was leaving a striker playing in the Premier League like Kelechi Ihenacho almost alone on numerous occasions. This led to conceding a goal early in the game and not being able to get back and equalise. As you can see below, Ahmed Hegazi and Mahmoud Hamdy could have done more to prevent Ihenacho from shooting and take his time extensively. 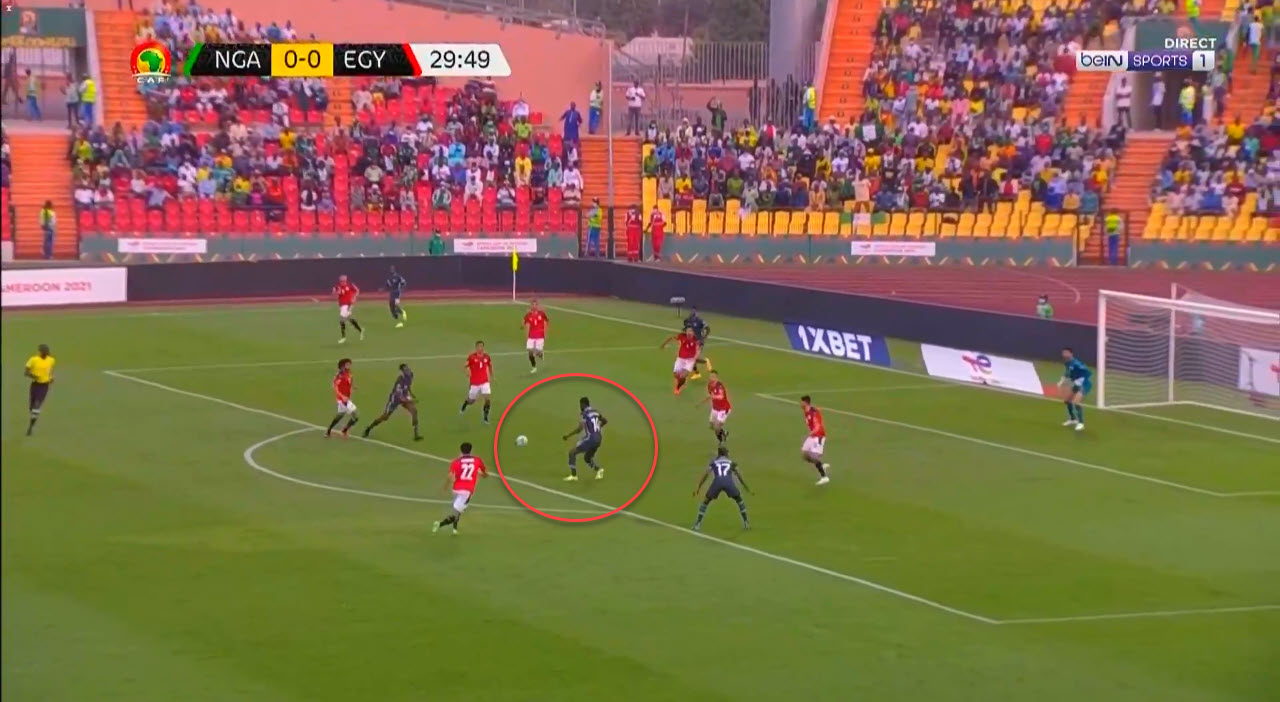 Egypt’s defensive problems continued throughout the game as they kept conceding numerous chances especially from the right flank on which Akram Tawfik suffered a lot from Moses Simon’s penetrations and dribbling skills.

In a similarly competitive match, Morocco were able to stop Ghanaians’ attacking strength thanks to their organised defence and anticipation of passes. They won 50,26% of the duels while conceding five shots compared to the ten shots conceded by Ghana. This tells a lot about Morocco’s ability to prevent Ghana from getting a lot of free space while it also proves that Ghana were quite easily penetrable. Moreover, Morocco won 57,38% of defensive duels while Ghana won 55,88%. In fact, technical and skilful players like Sofiane Boufal created the difference for their team in attack given that Ghana weren’t able to cope with such great individual techniques.

In the following goal action, Morocco scored the match sole goal thanks to Zakaria Aboukhlal who was able to provide a through pass to Boufal despite being marked by four defenders. Ghana lacked rapidity and intelligence during this kind of chances in order to stop Moroccans’ quick movements and passes. 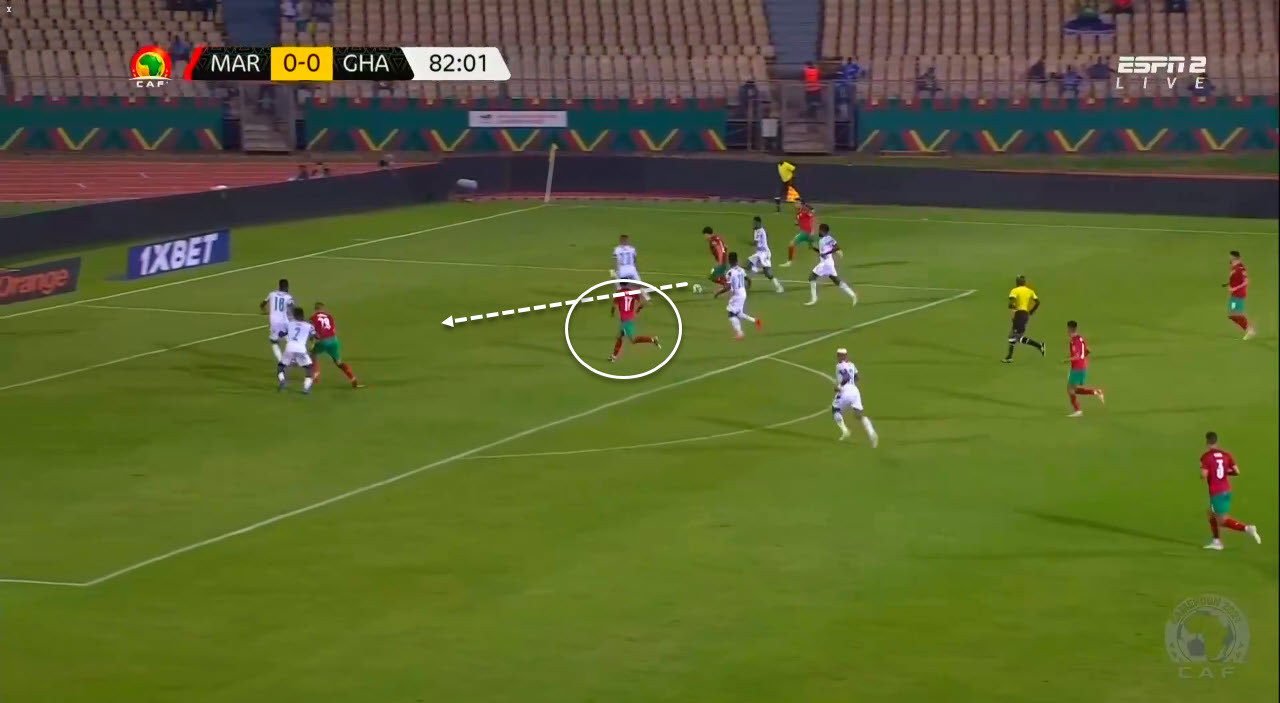 In conclusion, Mohamed Kamara and Steven Caulker were the stars of these first three days of the tournament thanks to their crucial performances, saves and interceptions that allowed Sierra Leone to draw with a strong team like Algeria. Regarding the other games, Morocco showed that their team is well organised in defence even though they played against a tough side like Ghana, but, all the other teams committed some big defensive mistakes, including Algeria, Senegal, Cameroun, Egypt and others.