Lukas Nmecha is a player with an interesting development curve. Born in Germany, but raised in England brought through into senior-level football by Manchester City, a club he had been with since the age of nine, Nmecha had been a regular at youth international level for England. But just like Jamal Musiala of Bayern Munich, Nmecha made a late switch over to represent Germany, albeit making his decision slightly earlier than Musiala, having played for Germany U21 as well. And yet had you asked Preston North End fans to predict his growth curve when he played 44 games for them in the 2018-19 season on loan from City, they likely wouldn’t have predicted international football and a starring role for a developed Bundesliga side by the age of 23.

In those 44 games, Nmecha scored only three times. Nmecha truly rose to prominence last season in Belgium, scoring 21 goals and making three assists in all competitions for Anderlecht, and with his contract at City coming to an end, he was able to sign for Wolfsburg for free. This wasn’t without its risk for Die Wölfe, given Nmecha’s patchy goalscoring record away from Anderlecht, but it is a gamble that appears to have taken off, with Nmecha having scored eight goals already, notching a goal every other game.

This tactical analysis and scout report will examine some of Nmecha’s key attributes as a player but also look at how he fits in with Wolfsburg’s tactics.

Nmecha has shown his value as a versatile attacker this season, where he spent plenty of game time as a number 10, as well as on either wing and of course as a centre-forward. The bulk of his minutes have come in the latter position.

We can see from his heat map shown below, that Nmecha does have a large number of actions in slightly deeper positions. Wolfsburg have predominantly played a 4-2-3-1 and it is in this formation where Nmecha has spent time as a ten or as a winger, but they also use a 4-4-2, and when he is paired alongside Wout Weghorst, Nmecha will still drop off into deeper positions. 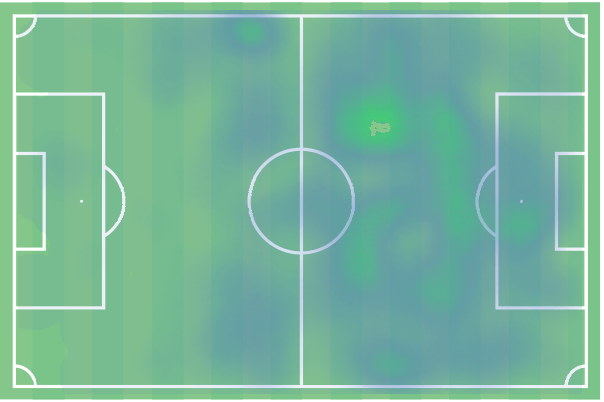 Nmecha will draw himself into these deeper positions, leaving Weghorst up top by himself. He will look to play off of the shoulder of the deepest opposition midfielder, and as play breaks, he can quickly accelerate into the space between the opposition defence and midfield where he can be found with a through pass.

We can see this occurring in the image below. The positioning of both Nmecha and Weghorst forces Koln’s two defenders left marking the latter into making a difficult decision. With Nmecha receiving in this space, the young German is difficult to catch as he can drive forward quickly with the ball at his feet. Nmecha is purposeful in such a position and will drive at the opposition defence. If they choose to stick with Weghorst they will simply concede space to Nmecha, and yet if one defender steps forward to engage the attacker, then it leaves Weghorst in a 1v1 position against the final defender. 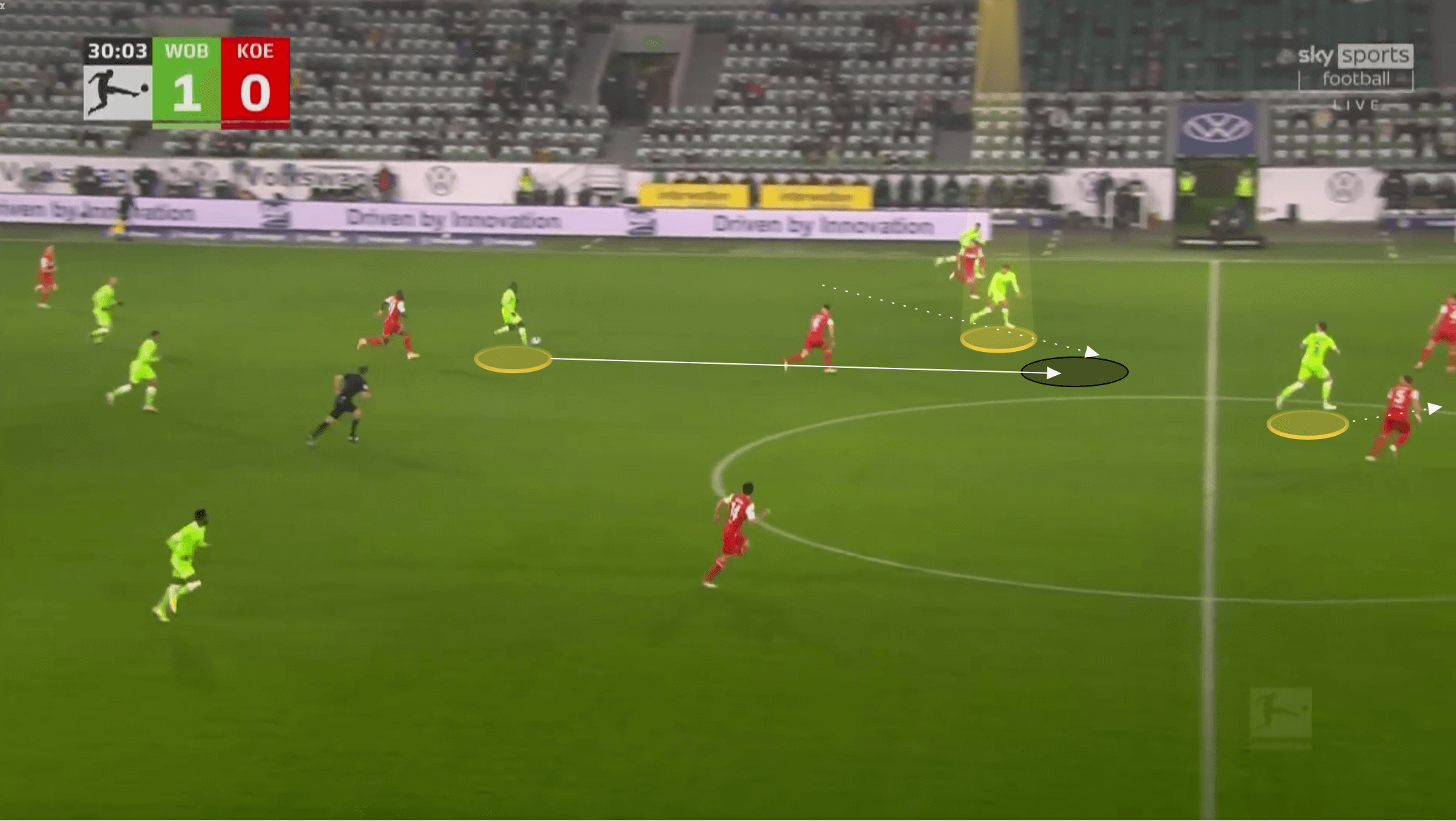 Moving into this position can prove to be very effective in moments of attacking transition for Wolfsburg. Nmecha will follow play closely and may anticipate a turnover of the ball or just keep close enough to the action whereby he can be found quickly in transition. Either way, Nmecha is so often the first option for his midfield when they win the ball inside their own half. Nmecha can find plenty of space in the centre of the pitch, particularly if the opposition central-midfielders step forward to counter-press.

In the following image, we can see him taking such a position in a moment of transition. On this occasion Nmecha anticipates his side winning the ball and makes a late run into this space from an initially higher starting position. 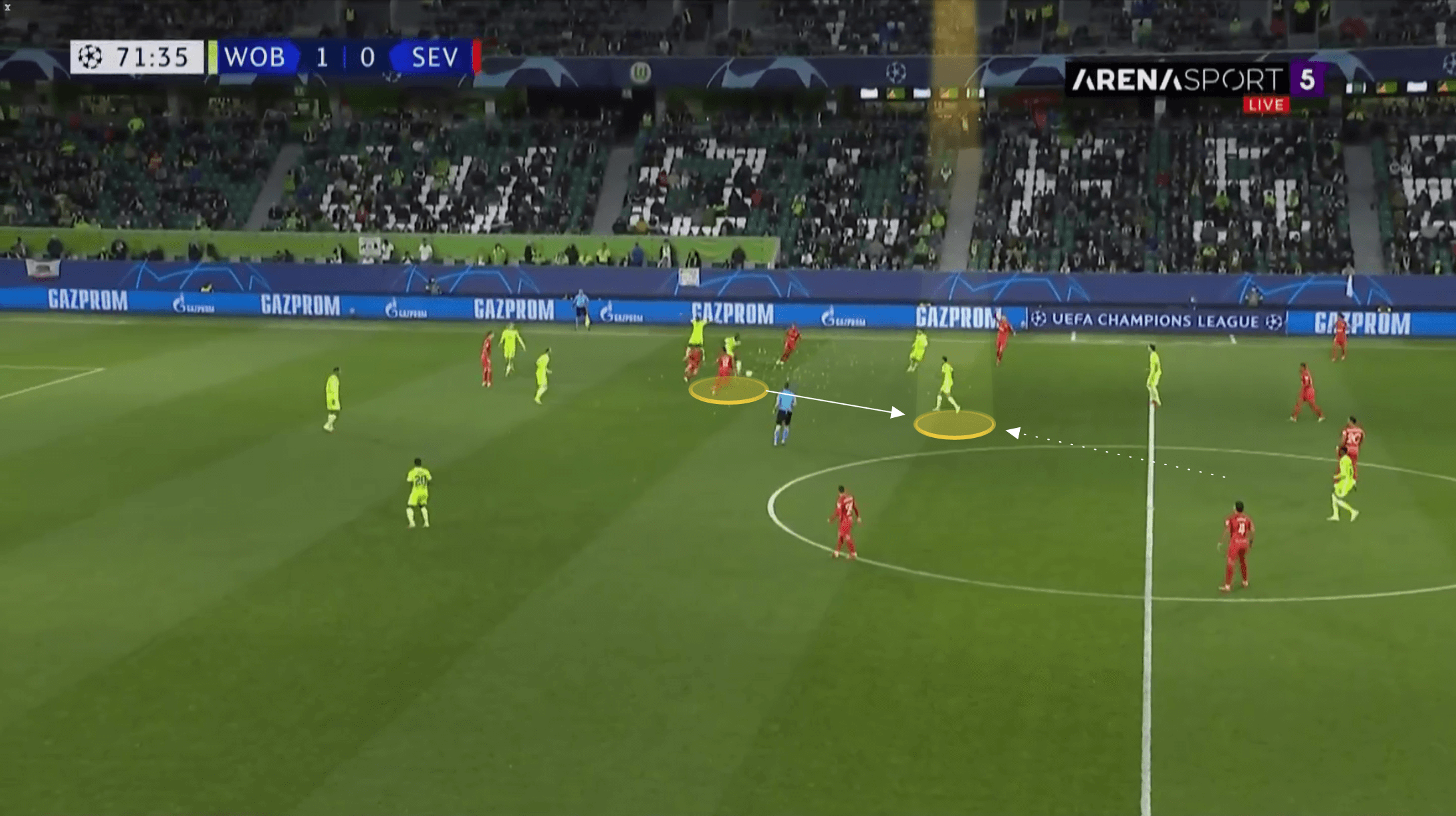 He is then able to drive forward through the central channel, quickly advancing the counter-attack. Nmecha has the consistent quality of not only threading through passes from the kind of position shown in the image below with accuracy and a good weight of pass but also understanding the right moment to play these passes. He is able to strike them whilst driving at pace, and a feature of Nmecha’s creativity is his consistent use of no-look passes, regularly catching defences off guard. 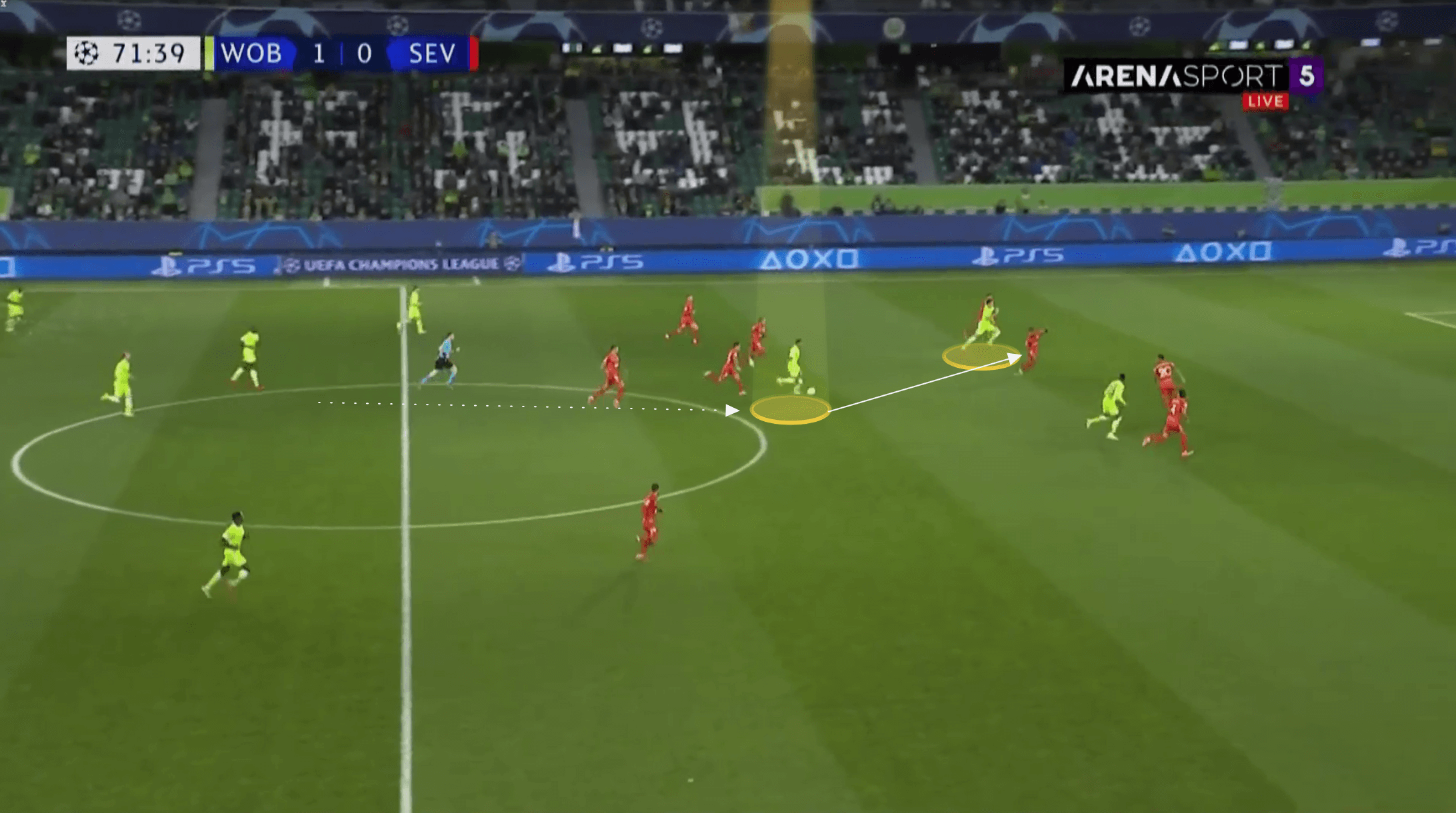 And this brings us on nicely to the creativity section of this scout report. Whilst Nmecha is yet to get an assist to his name this season, he has nevertheless created chances with some frequency and plays an important role in Wolfsburg’s attacking tactics – and not just as a goalscorer.

Firstly, we can see him receiving the ball in the 10 space once more, again with this highlighted moment coming in attacking transition. Nmecha’s overall awareness of the runs being made by teammates is of the highest quality. He does scan, but he also seems to use his peripherals to the fullest. In this moment he plays the pass to the overlapping winger without looking up, and with little hesitation, receiving the ball and immediately playing the pass on his second touch. 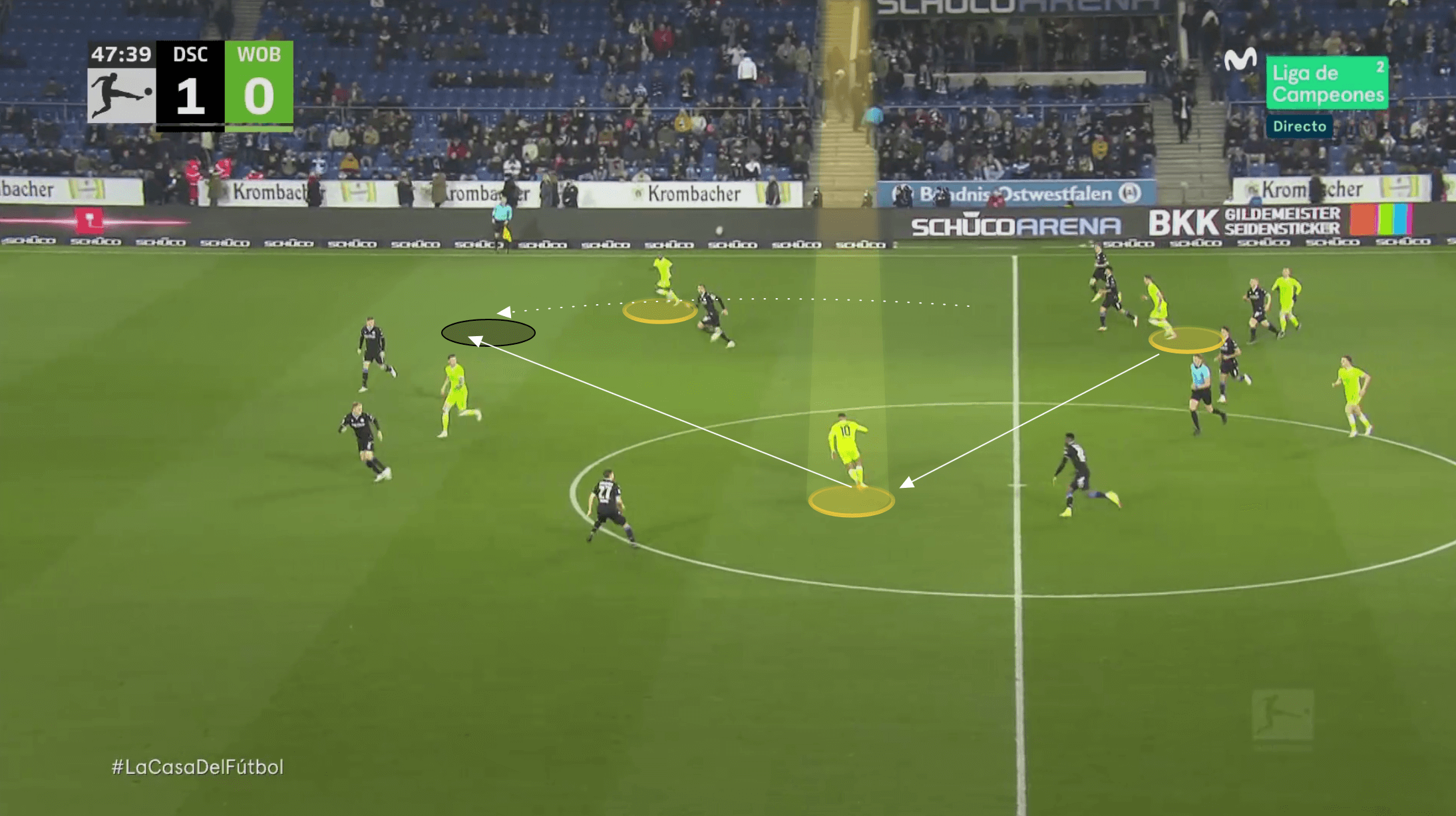 On top of his passing ability, Nmecha is a quality dribbler who excels when he has space to either drive into or to attack behind the defender. He can be effective in tighter areas too and will use strength and an aggressiveness when under intense pressure that often allows him to hold up play effectively, and get out of tight situations. When driving forward Nmecha keeps his dribbling simple. He often looks to knock the ball past the opponent, knowing he can beat most defenders over a 10-15 yard distance. He may use stepovers or hesitation, showing impressive deceleration as he approaches another defender, but again will inevitably use a strong touch to one side of the defender and his change of pace to break past them. Nmecha has averaged 3.73 dribbles per 90 this season and has registered an incredibly impressive 61.4% completion on these dribbles.

The image below shows Nmecha hitting the through pass having just advanced the ball himself from a dribble from the halfway line into this position. He does enjoy dribbling in this left-wing/ left half-space area, which allows him to make a late cut inside into a central position where he can so often find these through pass options from. 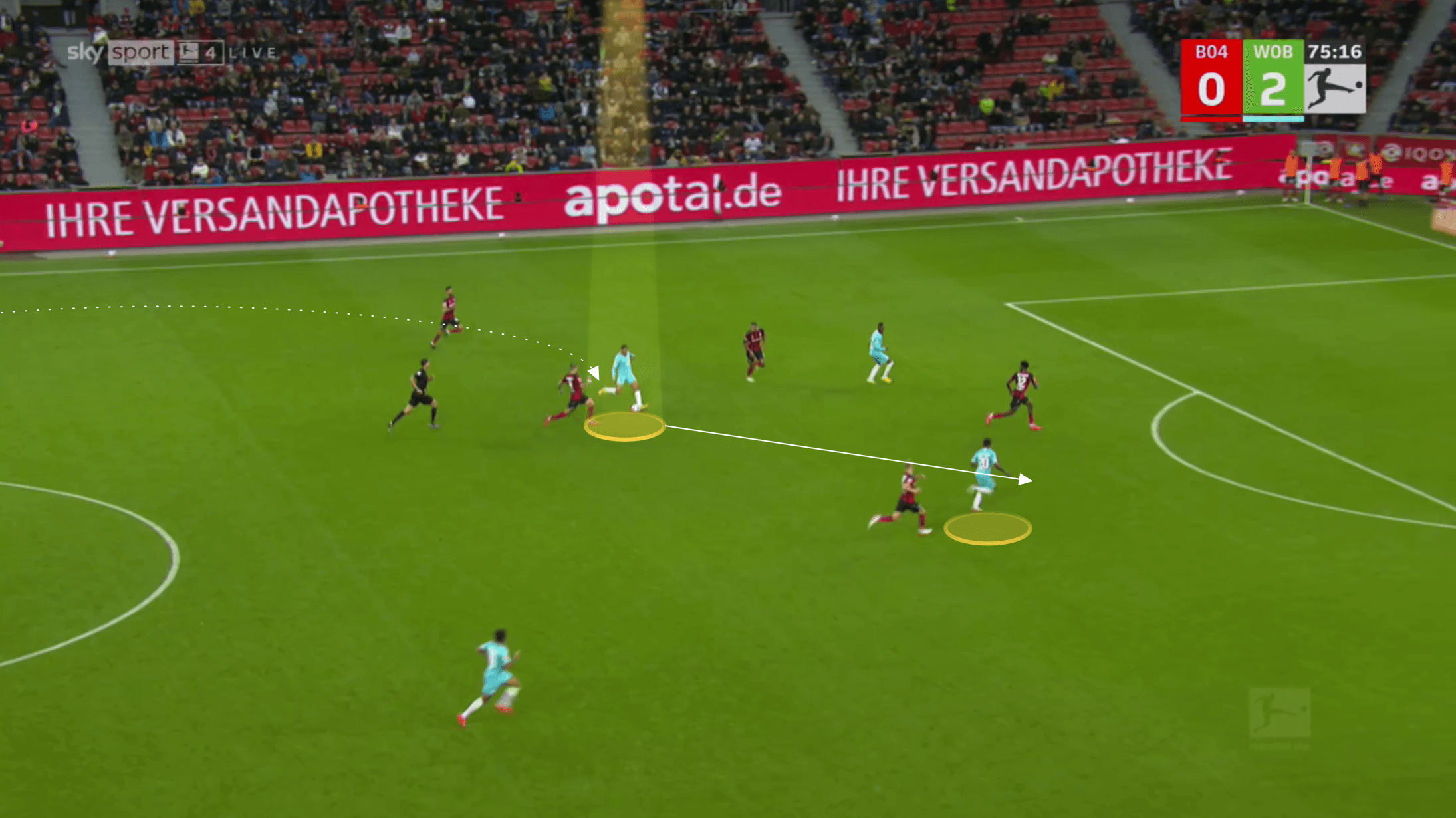 Just like with his passing, he disguises his intentions with his dribbling to great effect too. Generally, he doesn’t overrun the ball and as mentioned has a good sense of when to release it, however, the image shown below is a prime example of Nmecha’s quality on the ball. He shapes to strike from this position, engaging the defender to make a challenge, before making a last-minute adjustment and chopping the ball to the left, quickly changing angle and accelerating past the defender into the penalty area. 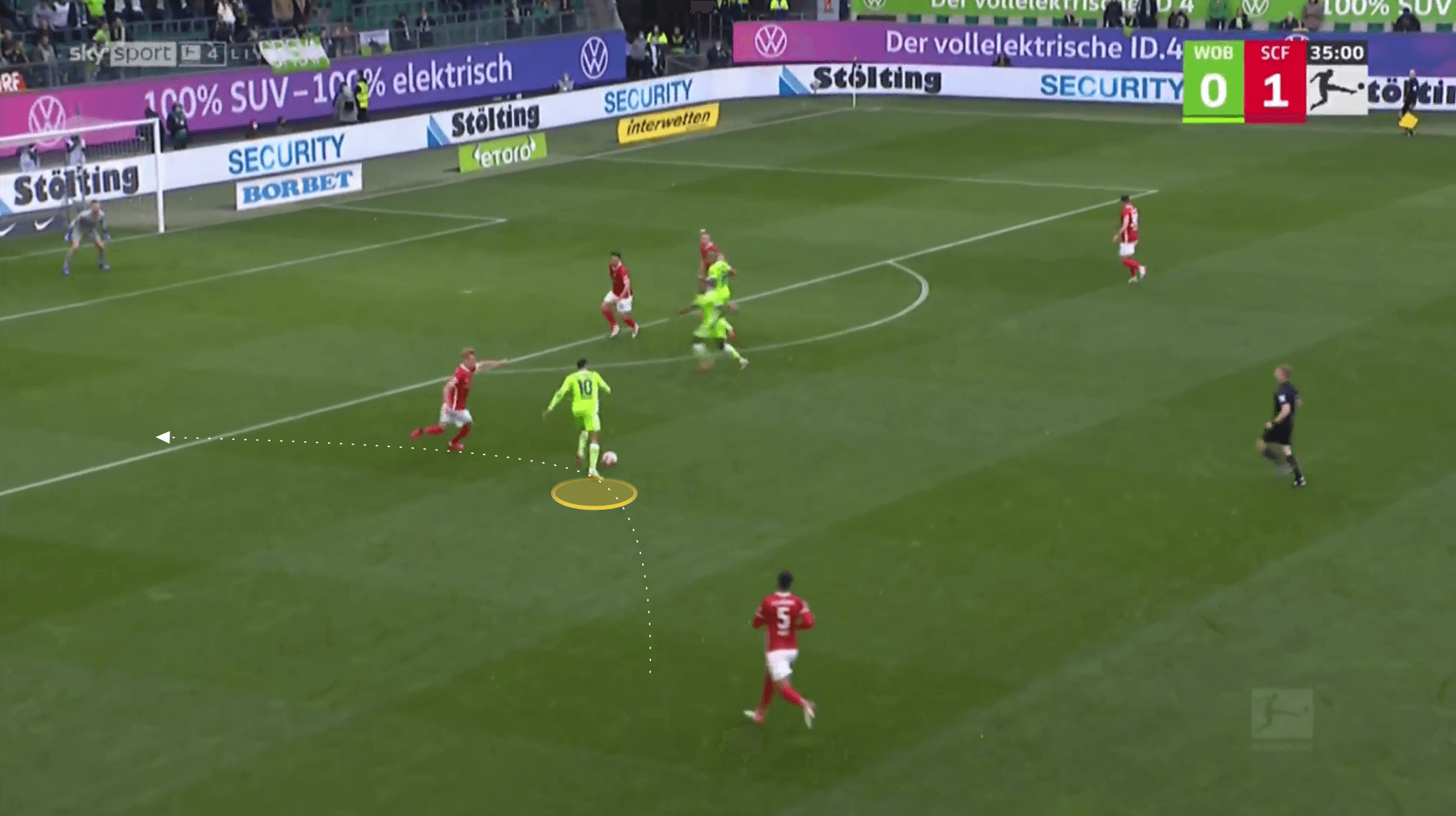 As we can see throughout this analysis, Nmecha doesn’t play with many restrictions on his movement and positioning, and just as he likes to explore the depth of the pitch, Nmecha will also shift across the width and is a threat when crossing too. Nmecha has completed 26.4% of his 1.24 deliveries per 90. He greatly prefers to cross with his right foot and will make a late change to shift the ball onto his right if it is necessary. Again he rarely looks up before striking the ball and will use a low back lift with his technique to prevent the keeper or defence from setting themselves before the cross is made. 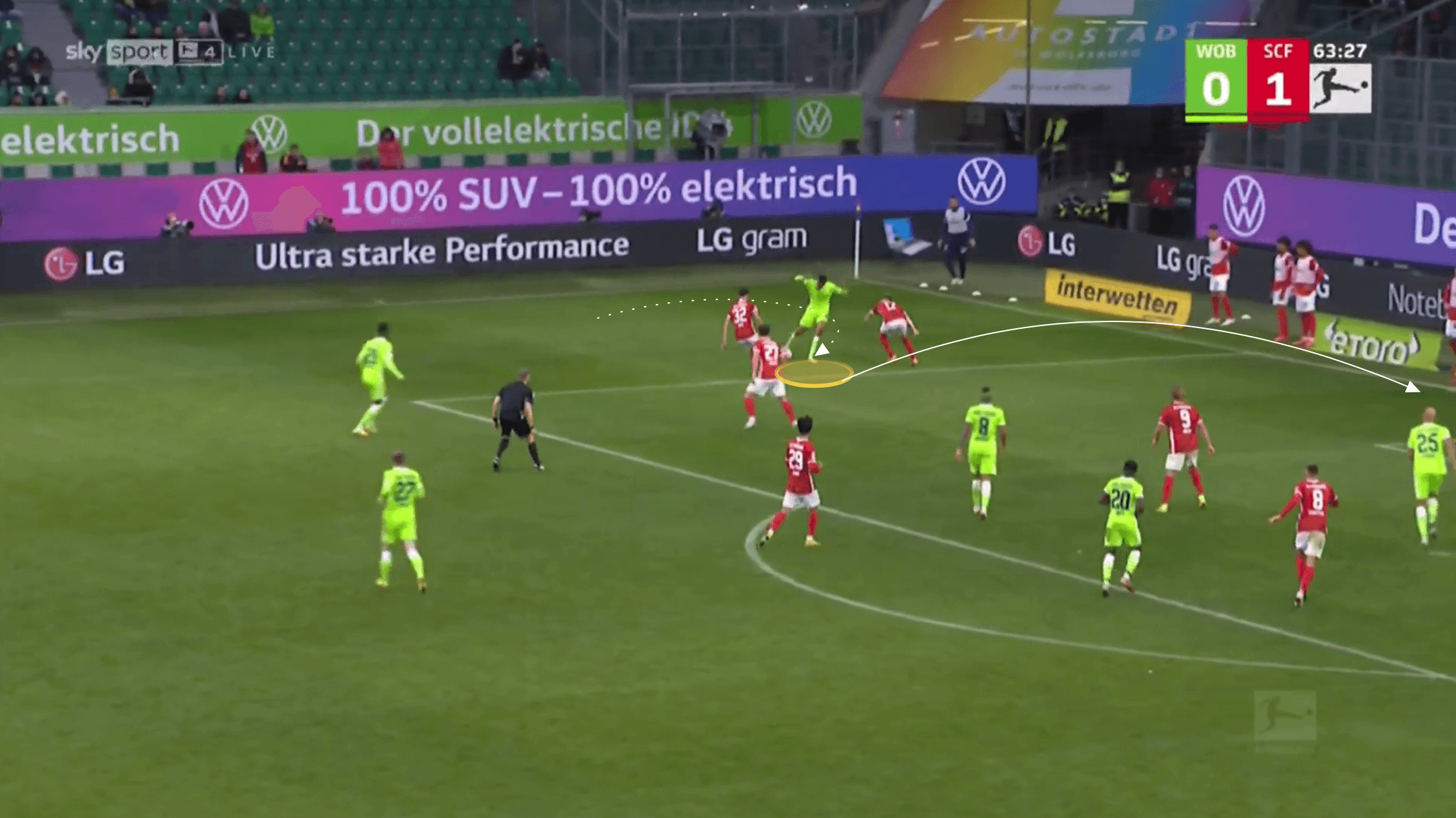 As for his finishing, the vast bulk of his shots this season have come from inside the area. Nmecha is outperforming his xG of 5.84 this season, which is still a highly respectable xG score at the halfway point in the season. There are a small number of shots from outside the area where Nmecha appears to be largely inaccurate. There are a high number of inaccurate shots from inside the area, whilst a fairly even spread between shots on target being saved or going in – roughly hinting that if Nmecha hits the target he has a 50% chance of scoring, which isn’t bad at all. 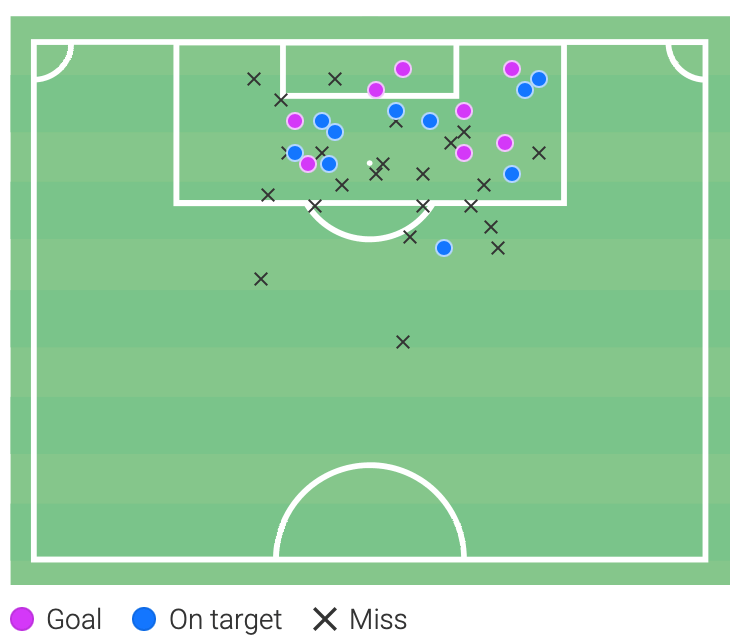 The final thing worth noting from this shot map is that Nmecha is dangerous from wider areas, with four of his eight goals coming from tighter angles to the right of the six-yard box.

Nmecha has impeccable timing on his runs when looking to access the space behind the opposition defence. Seeing Nmecha curve his run and hesitate is a common feature when he doesn’t have the ball.

He often starts his runs from more central positions, and as the shot map points out, he is more than comfortable receiving the ball inside the area in a wider angle. We an see him making a run into a wide right position in the image below. 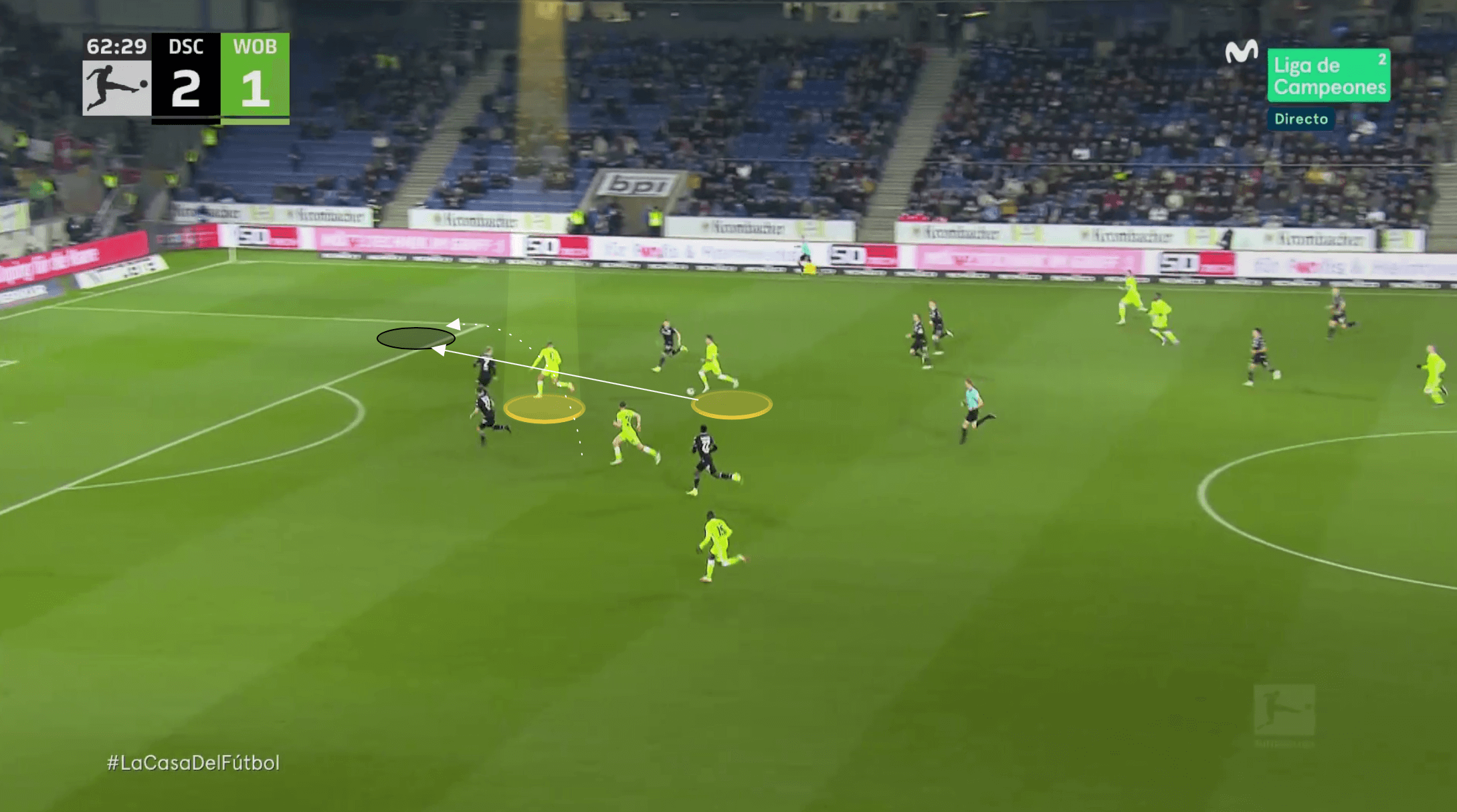 Nmecha strikes the ball with power, and from these wider angles he has a penchant for aiming for the top corner. For goalkeepers from these wider angles, this is often one of, if not the most difficult area for them to stop the shots. We can see in the image showing how the goalkeeper is set in a low position, ready to stop the shot towards either corner and ready to explode sideways to dive and make a save if necessary. He is in this low position, ready to generate such power. And yet Nemcha’s shot goes to the place in the goal that is the closest distance from him, and therefore the ball arrives at the goalkeeper quicker than if Nmecha were to shoot across goal. 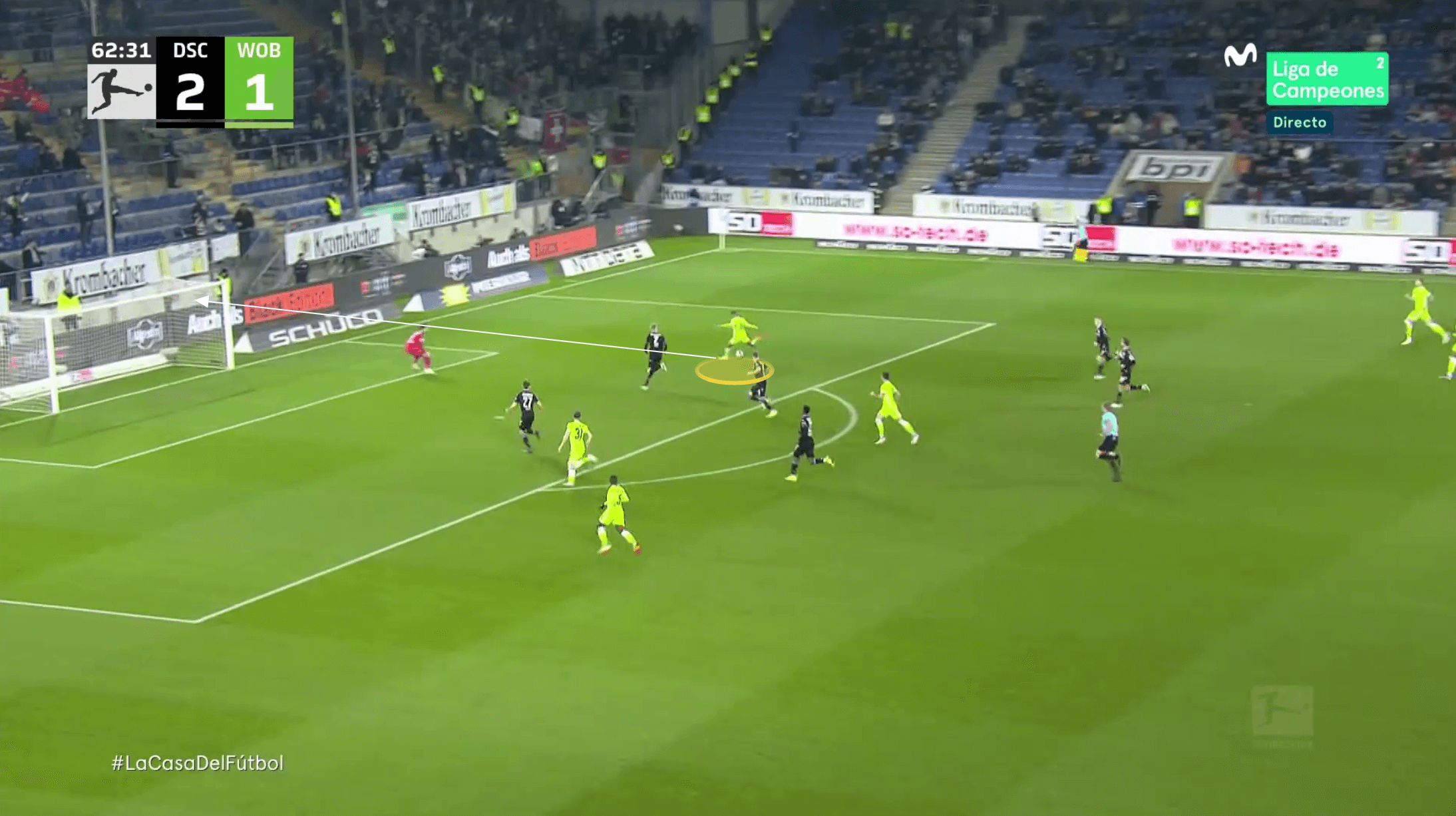 This technique is incredibly effective and it has allowed Nmecha to score on a number of occasions this season from a highly difficult and improbable angle. Whilst he strikes the ball with power, it also shows a high-level of accuracy to hit this target. 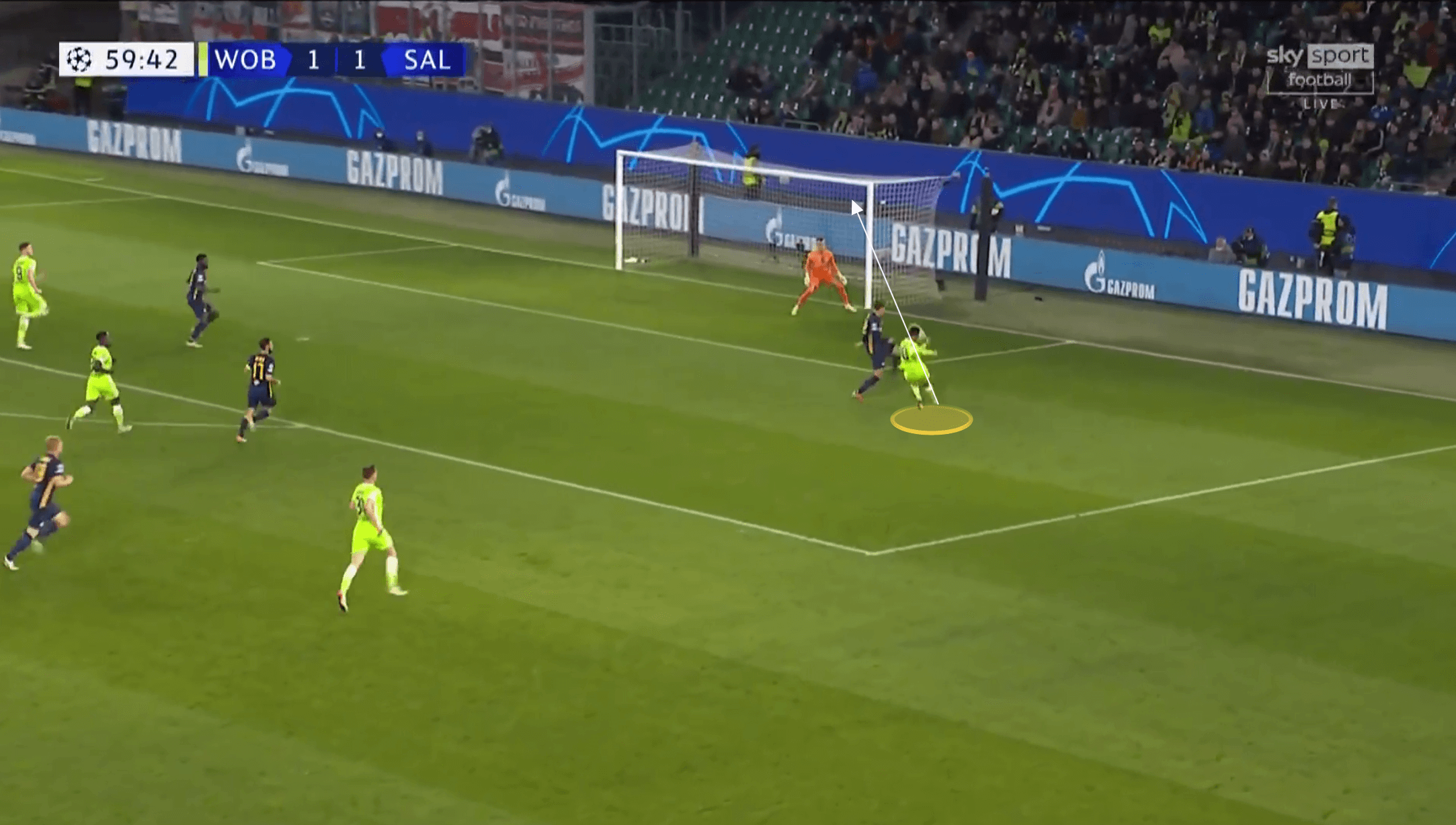 On top of his pace, Nmecha is strong and has good height too. He stands at 1.85m, or 6’1”, and as such he is a threat aerially too. Two of his goals this season have come from headers. He has an impressive spring to his leap, but more so he shows excellent timing when attacking the ball aerially. We can see the quality he possesses in the following image, where he is able to score against Augsburg with a glancing header, despite being beyond the front post, an incredibly difficult angle to score from. In this instance he made a late adjustment, changing the angle of his run and darting towards the front post area, before connecting beautifully with the cross to direct the ball once more into the top corner. At 23 years of age, Nmecha is still a work-in-progress with plenty of potential to continue growing as a forward. If anything his form has likely excelled the rate at which Wolfsburg potentially intended on using him, and he has become a key part of this team. In fact, Nmecha’s expected goals and assists of 6.42 places him in the top 30 in the league for this metric, only 0.05 xG+A behind wunderkind Florian Wirtz. Nmecha looks likely to hit double digits this season which would be a fine return for a player who was a free transfer in the off-season, and will silence any doubters who were unsure he could bring his form from Belgium into a top league such as the Bundesliga.