This article represents the first of a six-part series on coaching team defending. This is looking at group tactics, rather than the individual, so whilst individual technique or tactics can certainly be coached if necessary during these sessions, these aren’t the main outcomes of the practices shown.

Secondly, as a caveat, these practices shown are just ideas, and may not suit every team, or every age level. However, if they can be used as a framework to generate new ideas or adjusted to make a session, then this tactical analysis and article will have done its job. It’s not always advisable to simply “copy and paste” a session plan and apply it to your own team, given that your game model may not suit these practices, or perhaps your team’s current learning curve is not at the level required to run these, or conversely they are at a level where these practices aren’t challenging enough.

The first part of this series on defending will focus on pressing from the front. When working on a team’s defensive shape, a topic like pressing, isn’t going to be solved in one session. This is something that can be worked on in a block, or continuously adjusted throughout a season. However, this series looks to highlight some ideas for various aspects of team defending. The session goal is to have the team more confident in recognising pressing triggers, understanding how to “delay, deny, dictate” the opponent when pressing, and then being able to put their learning into a game situation where the team tactic can be worked on as if preparing for a game that following weekend.

As a team you may seek to press initially to show outside, or press to show inside. Equally as play develops and you defend inside your own half, you may continue to do the same, or do the opposite. The session can be adapted regarding your tactics, but what is important is to get the “delay, deny, dictate” principle across in the session.

It is also important that once a player recognises a pressing trigger, that they not only force the opponent to play in a certain direction through their press, but that the rest of the team reciprocates this, shifting across in a compact shape into the area of the pitch where play is being dictated.

Before even getting into this section, it is worth noting that this session is going to involve a high number of accelerations and decelerations. If your team trains three or four times a week, the session should be placed on a day that isn’t a recovery day, and where players can provide full intensity.

The first practice is very simple, but should allow the coach to focus on the overall relationship of “press and cover”, as well as having the ability to step in and discuss recognising pressing triggers. A stretch goal for those flourishing in this activity is to begin looking at where the pressing player can direct play.

A rondo works well for this activity – and for manageable groups where each defender can get 1-to-1 support anything from a 4v2 up to a 6v3 will work well. The size of the grid should be a moderate size – not small enough where the defending team can win the ball back immediately within a matter of seconds, but equally we want the defending team to gain success, and having a grid size where the possession team can keep the ball for 20 or more passes, isn’t going to provide the outcome we are looking for.

The image below shows such a practice.

Firstly can the defending team work together where they aren’t leaving gaps between them where a split pass can be made. To encourage the possession team to look for these, a goal can be given for every split pass. 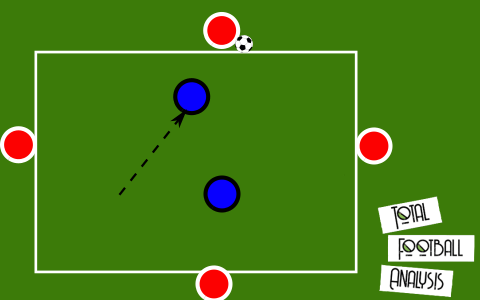 Secondly, can they ensure that they are working as a pair, where when one player presses, the other covers them. 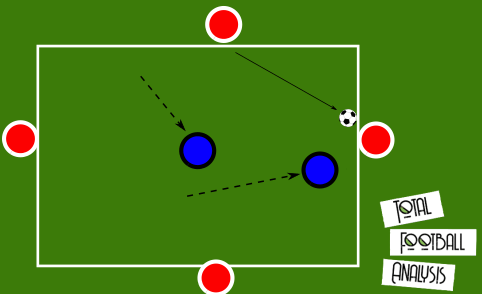 For these coaching points, the “why?” can be important to address for some players. We don’t want to see a split pass because it takes out our press. We don’t want one player running around pressing all the time, because it’s not sustainable over a longer period of time, but it can also pull them out of shape and leave holes for the opponent to play through.

Once players are confident with this press and cover motion we can also ask them where a player should show an opponent, like in the image previously shown. As the covering player steps forward to press and his teammate in turn drops back to cover, does he want to show this player to his left or to his right? Ideally he wants to show him back where he came from, where there is less space, given that this is the area his teammate has just pressed.

The final coaching point we want to address, and this can achieved by making the grid size slightly larger, is what we do when the opponent are keeping possession and pulling our press apart. Depending on the level of the players, pressing triggers can be discussed and evaluated. Generally though, we want the players to add intensity to their press when they see an underhit or overhit pass, or a player taking a poor touch, or a touch too many. Of course, the ball being played to a specific opposition player can be a trigger too, but we may not want to approach this and put our own players under undue pressure in an exercise, unless of course the player in question is very strong and would be able to deal with this mentally.

We can then move onto putting this into a practice worked on in the specific area of the pitch where we may look to press. For example, if pressing in a 4-3-3, where a number 10 is supporting the front three, a 5v4 in favour of the opposition can work well in terms of providing the opportunity for our players to work on press and cover in more of a game context.

A goalkeeper can serve, and if the pressing team win, there can be a 3-5 second limit on them to get a shot away, keeping it game-realistic and ensuring the keeper is being worked. However, if a keeper isn’t available a coach can serve and the pressing team can have the same time limit to work the ball to the coach, perhaps.

The practice can be seen in the following image. A set of goals, indicated by the bright green cones, can be put at one end for the in possession team to aim to play into, with them being small to avoid them immediately playing this pass and encouraging them to work a pass to create a better angle. A pivot should also be put in place, forcing the in possession team to have discipline with their press and prevent that inside pass. 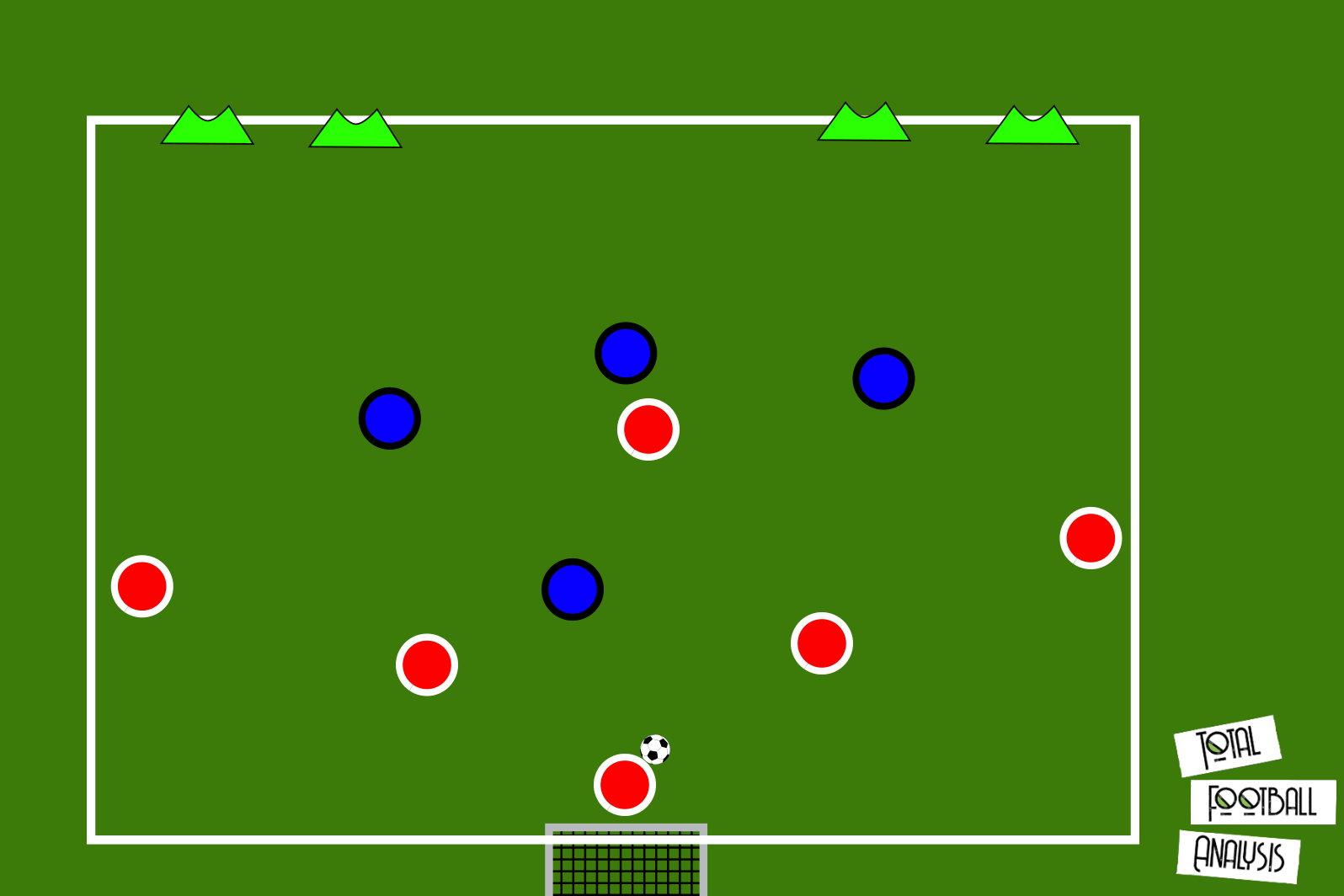 The pressing team will initially struggle to win possession and prevent the opponent playing past them, particularly if the centre-forward doesn’t dictate play. 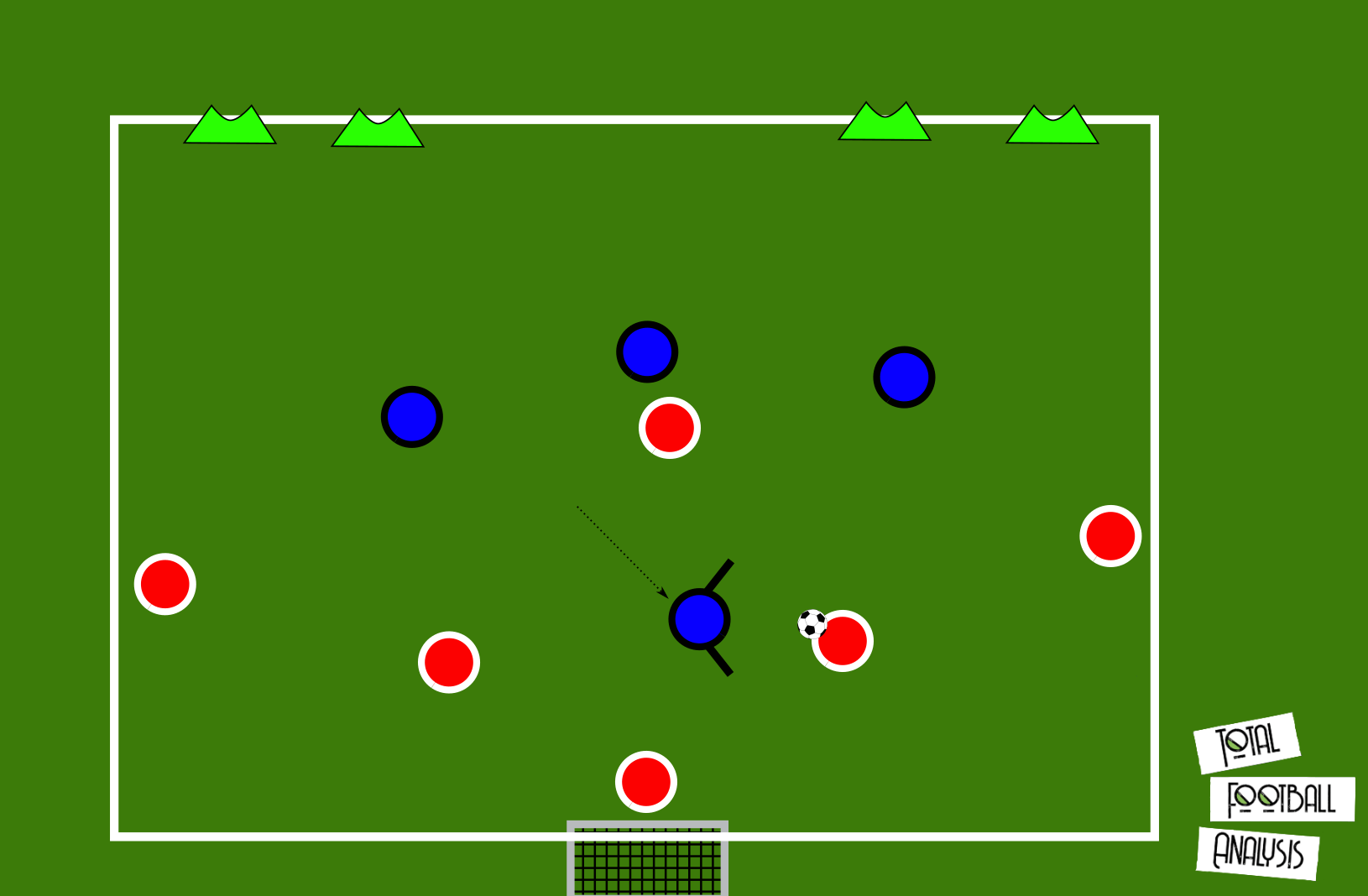 If the team’s goal is to show inside rather than outside, the same set-up can be replicated, but with the wingers angling their own press from out wide with the forward staying deeper

Following this, the positioning of the wingers and the 10 can be worked on. With the incentive of having 3-5 seconds to score, the pressing team have a clear goal, providing a motivation for them, other than just the coach telling them to press.

The goals can be placed in the half-spaces, and the centre-backs can be given a goal that if they can split the opposition press with a floor-pass straight into the mini goal, it counts as two.

This will ensure the pressing team work as a unit to initially remain compact. The winger wants to stay narrow enough where they prevent a forward pass through this space, however, they also want to anticipate the pass played out wide, so they can close this distance quickly. 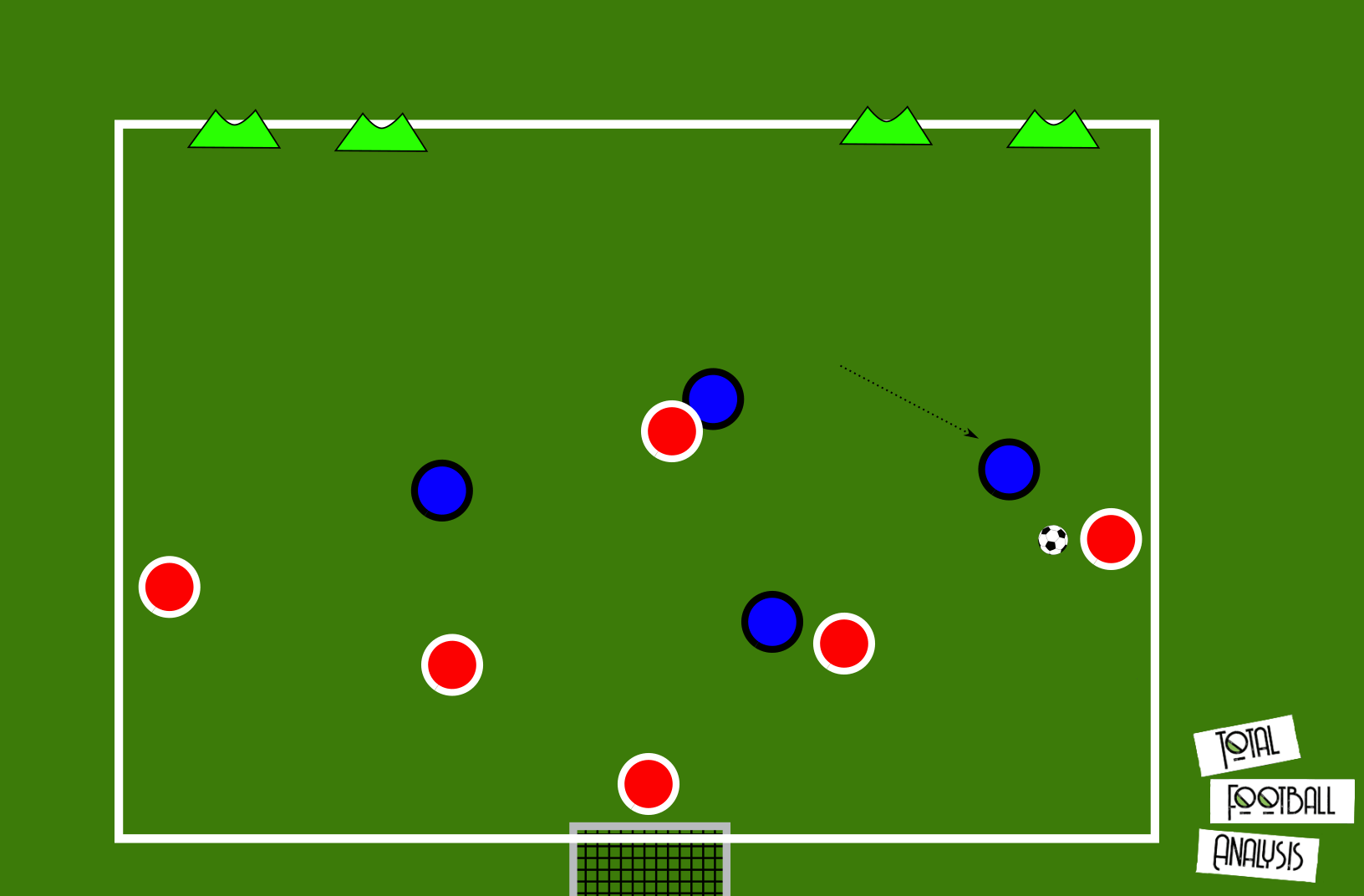 Asking the wingers to do this repeatedly is difficult, and there may need to be substitutes in place ready to roll on and roll off. However, it is also a chance to reinforce pressing triggers. Whilst we want the winger to step forward and continue to show the opponent away from the centre of the pitch, they can pick and choose their moments to provide full intensity, and recognising a pressing trigger is an intelligent way to do this.

This can be an area of the session where the coach steps off somewhat and allows his pressing team to solve the problems for themselves and reflect on how their pressing system is working. Small breaks within the session, structured as drinks breaks, are an excellent way to give them the opportunity to do this as a group. Ask the players to get together and make any adjustments in these moments.

This practice will be an extended version of the previous, with a larger space and more players.

Mini goals can be placed on or just beyond the halfway line, representing outlet passes for the possession team. 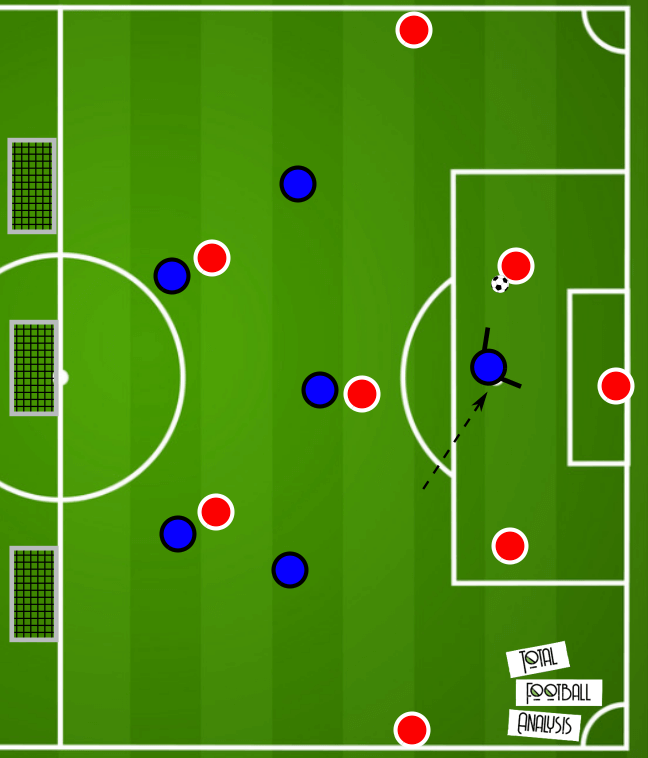 The amount of players used in this practice can vary, but it would work best with a goalkeeper, a back four and a midfield three, versus a front three and a midfield three, at the very least. However, if we can add in a target player for the possession team, or even wingers, and full-backs for the pressing team, that isn’t an issue. It can go all the way up to an 11v11 if necessary. But, to ensure the pressing team get their repetitions, the practice should always start from the possession team keeper, and the pressing team can be given an 8 second time limit once they win possession, to get a shot away. This keeps it game-realistic, and the chance to score provides them with an incentive to press.

Regardless of your goal with your pressing shape, detail can still be added in this session, and for more advanced teams, new problems can be thrown in and ask them to solve it. For example, how would they adjust when facing a double pivot and with a 10 taking a high position further forward. Or against a midfield four, what would the pressing team’s reaction be? Perhaps the far-side winger could tuck inside? Or what happens if the centre-forward sits off and marks one of these players with his 10 marking the other? 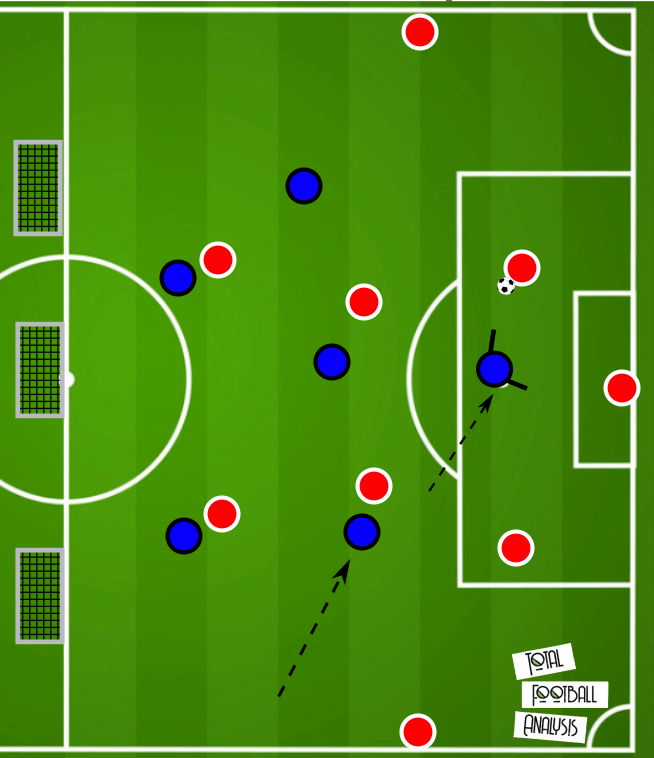 This session and analysis is just a framework and ideas that the writer, a coach, has put together, almost thinking out loud. It doesn’t need to be followed religiously and is certainly far from perfect, but the aim is to work on a team’s pressing shape, using this shape to delay the opponent from playing forward quickly, dictating where the opposition can play, and denying them from being able to play forward successfully or even retain possession.