Adnan Januzaj 2021/22: The former Man United man who could be the bargain of the summer – scout report

The free-agent market is now an integral part of the transfer window, with more and more players trying to run their contracts down in seek of a move, some of the game’s biggest names have moved on a free transfer in recent years.

This summer is no different with some of the world’s best players like Kylian Mbappe, Paul Pogba and Paulo Dybala all currently poised to enter the free agency market. Beyond the big names, there is the potential for clubs to pick up some hidden gems on free transfers this season and in this article, we will look at former Manchester United man Adnan Januzaj.

Since his unsuccessful spell in the Premier League, he has rebuilt his career in La Liga with Real Sociedad and has consistently been a creative force for his team. This summer he is a free agent and could prove to be a savvy signing for someone who is looking for an attacker. At 27 years old, he isn’t the youngest player but is still within the peak years of his contract and has been an effective player in recent years.

This scout report and tactical analysis will provide an analysis of Januzaj’s game and some of the attributes and skills he could offer for a new team this summer.

Januzaj plays as an inverted inside forward / winger. As you can see from his heat map, he likes to stay wide and operate on the touchline, this can be beneficial as it can create space both inside for himself to cut inside and make runs or for an underlapping full-back. He can operate on both the left and right but does prefer to operate on the right side, confirmed by his heat map, doing this allows him to tactically come inside onto his left foot, which is his preference. 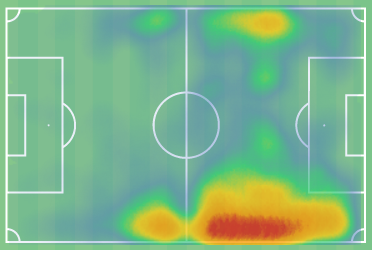 The use of data in the recruitment and scouting process is forever growing and now plays a significant role. This means that we must look and address the data with reference to Januzaj’s performance particularly his attacking and creative performance. For a player like Januzaj and the position he plays, he is often judged on his chance creation and assists. This leads us to firstly, look at assists per 90 and expected assists per 90.  In terms of assists per 90 Januzaj ranks below average whereas XA Januzaj is one of the league leaders with 0.25 XA per 90. With assists, XA is a better measure of creative performance due to the fact the player may create a high-quality chance, however, it is out of hands whether the chance is scored. Therefore, XA per 90 is the more accurate measure of a player’s creative performance.  From the graph, we can see that Januzaj is creating high-quality chances for his teammates however they are failing to convert. 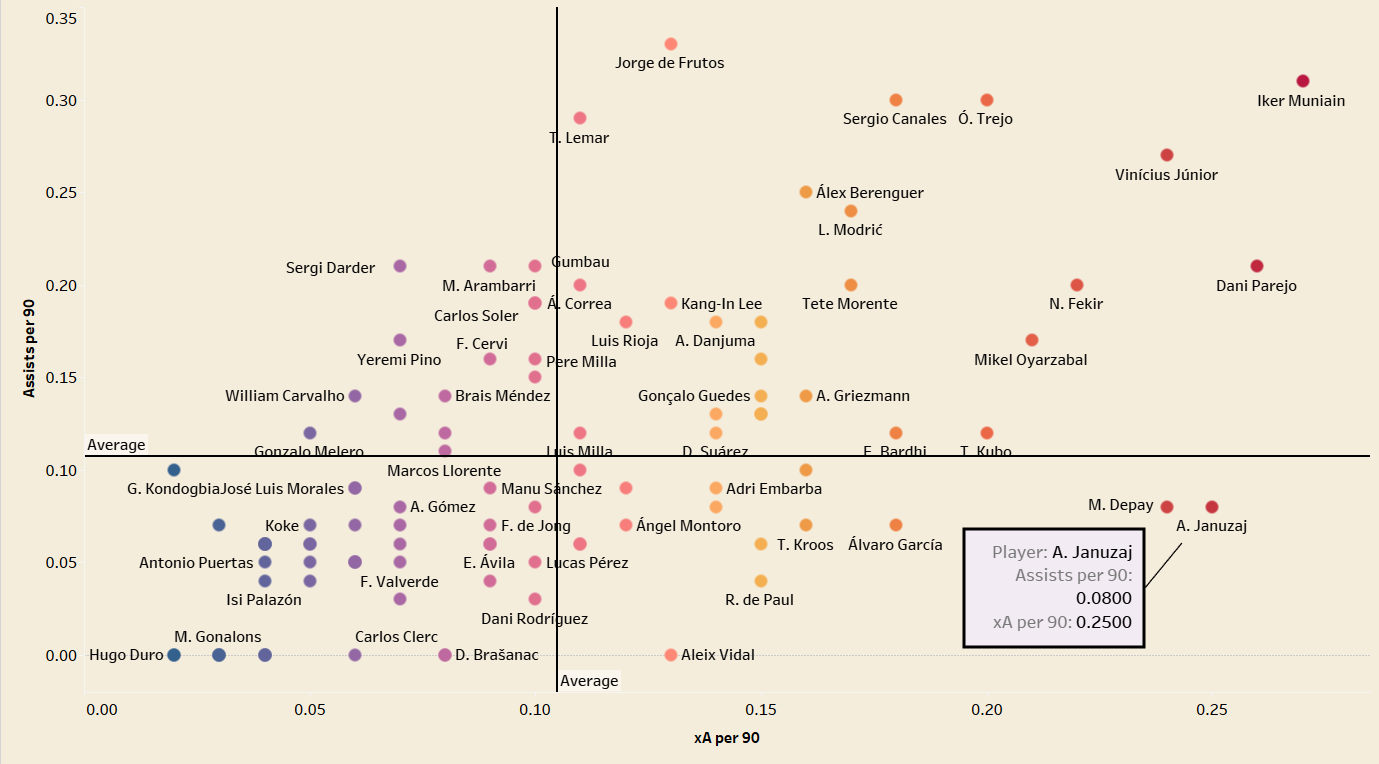 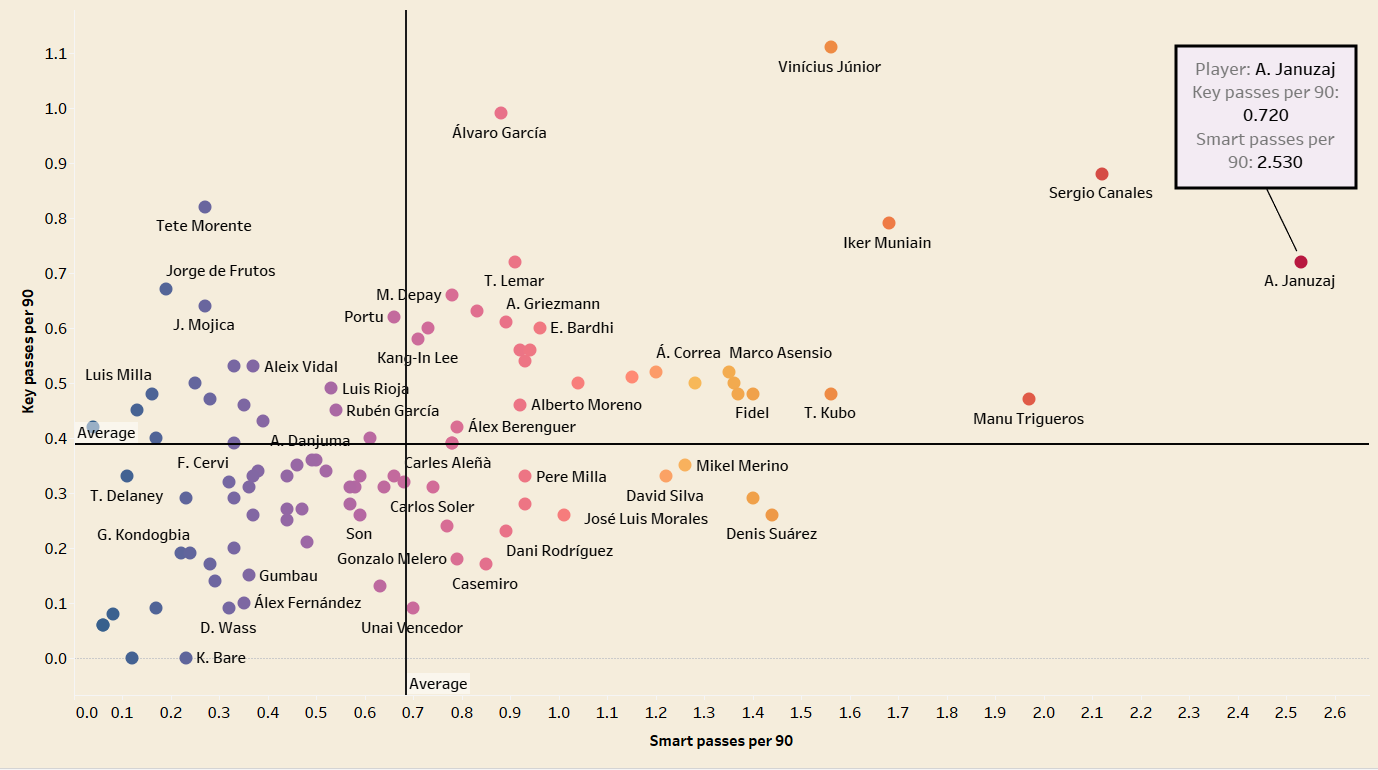 This reinforces that Januzaj can consistently create chances for his team, particularly with his passing quality.

Another impressive attribute of Januzaj’s game is his dribbling and ball-carrying ability. This can be confirmed by the data, below shows dribbles per 90 and successful dribble percentage. Januzaj is an average dribbler in terms of success rate but he has the second-highest dribbles per 90 in the league behind Real Madrid’s Vinicius Junior. 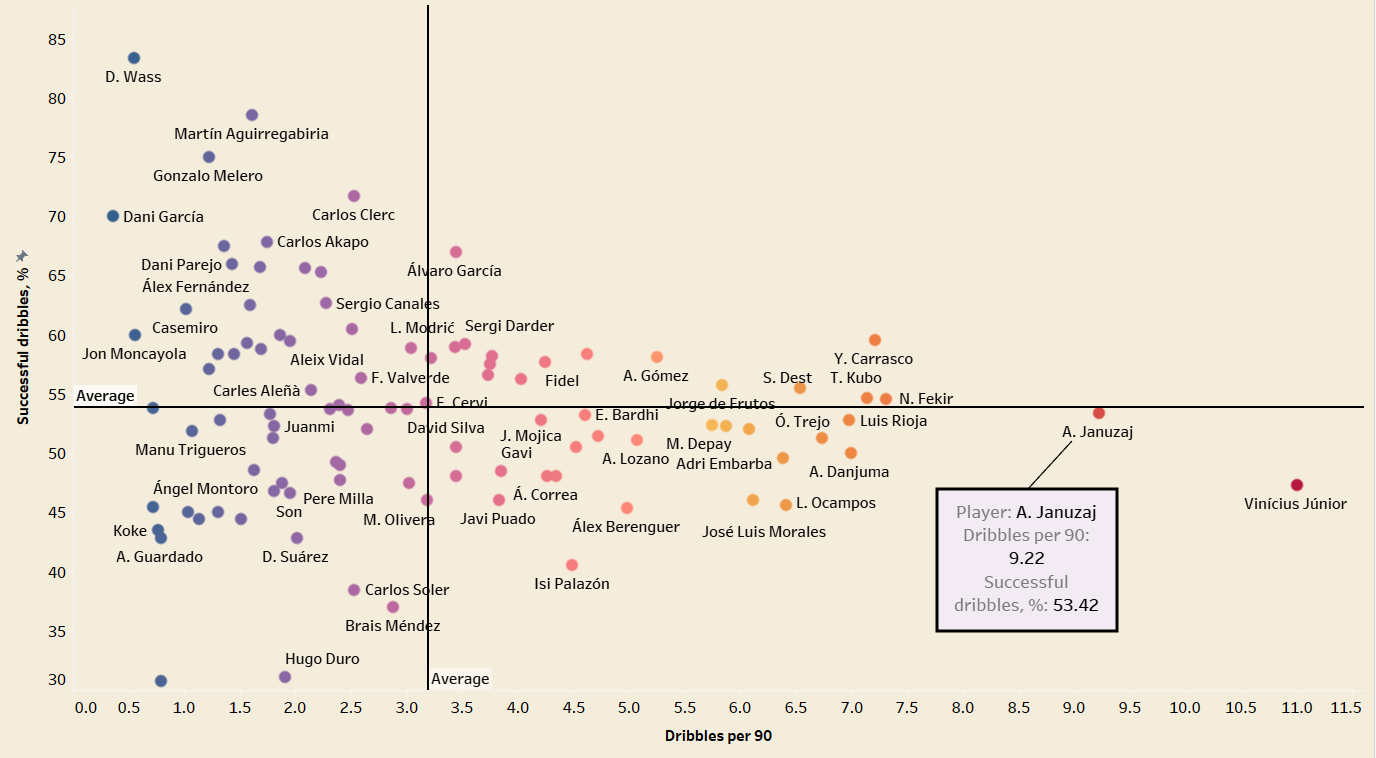 Januzaj attempting 9.2 dribbles at a success rate of 53% is very impressive and makes him one of the best dribblers in La Liga.

Finally, we will look at Januzaj’s ball progression, again another aspect of his game that stood out when analysing his performance. Ball progression can be achieved using both ball carrying and passing. Januzaj does both of these well and from the graph, you can see his metrics are above average in both. The ability to progress the ball is important for the team and shows an ability to contribute to the build-up and attacking phases. 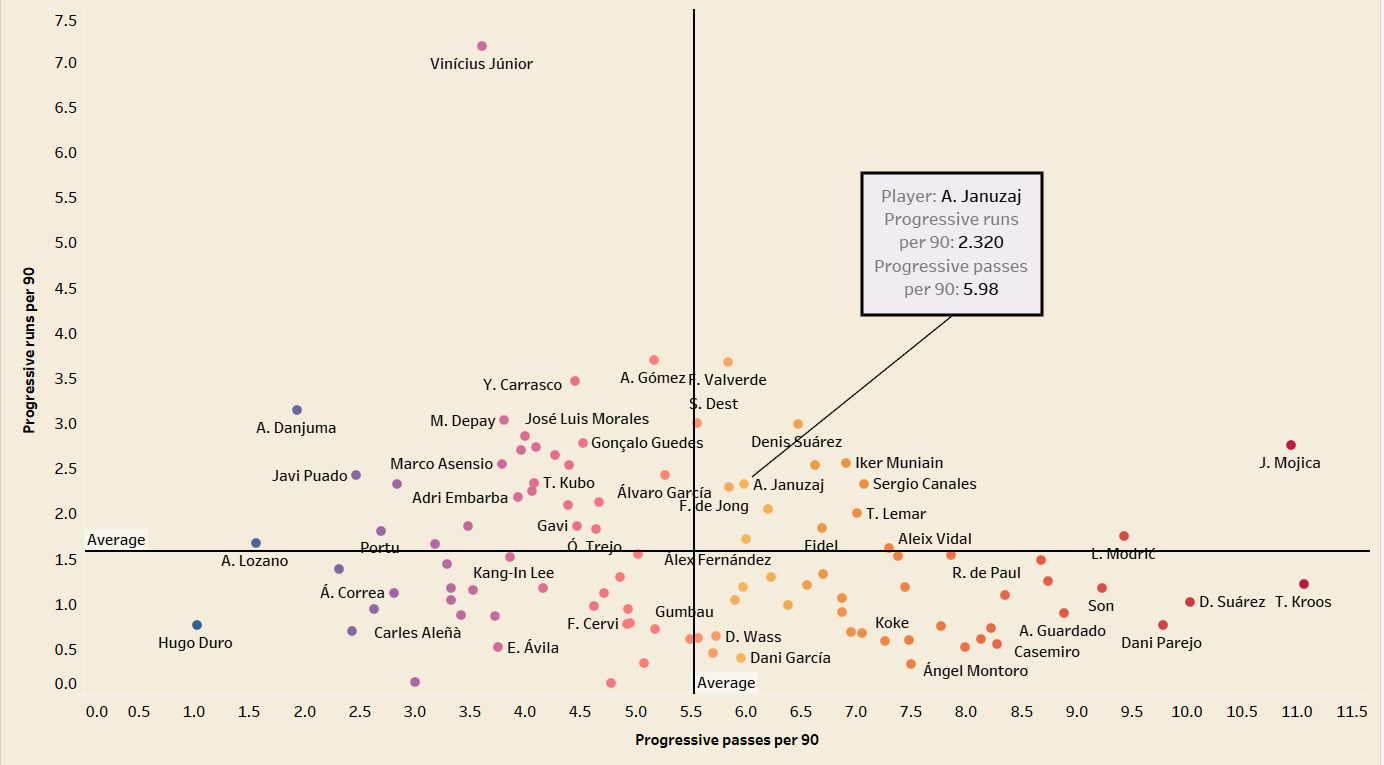 From looking at the data, it can be concluded that Januzaj is one of the league’s best attackers and creators, this can be confirmed by looking below at the ranking of successful attacking action per 90, which show Januzaj as the league leader. 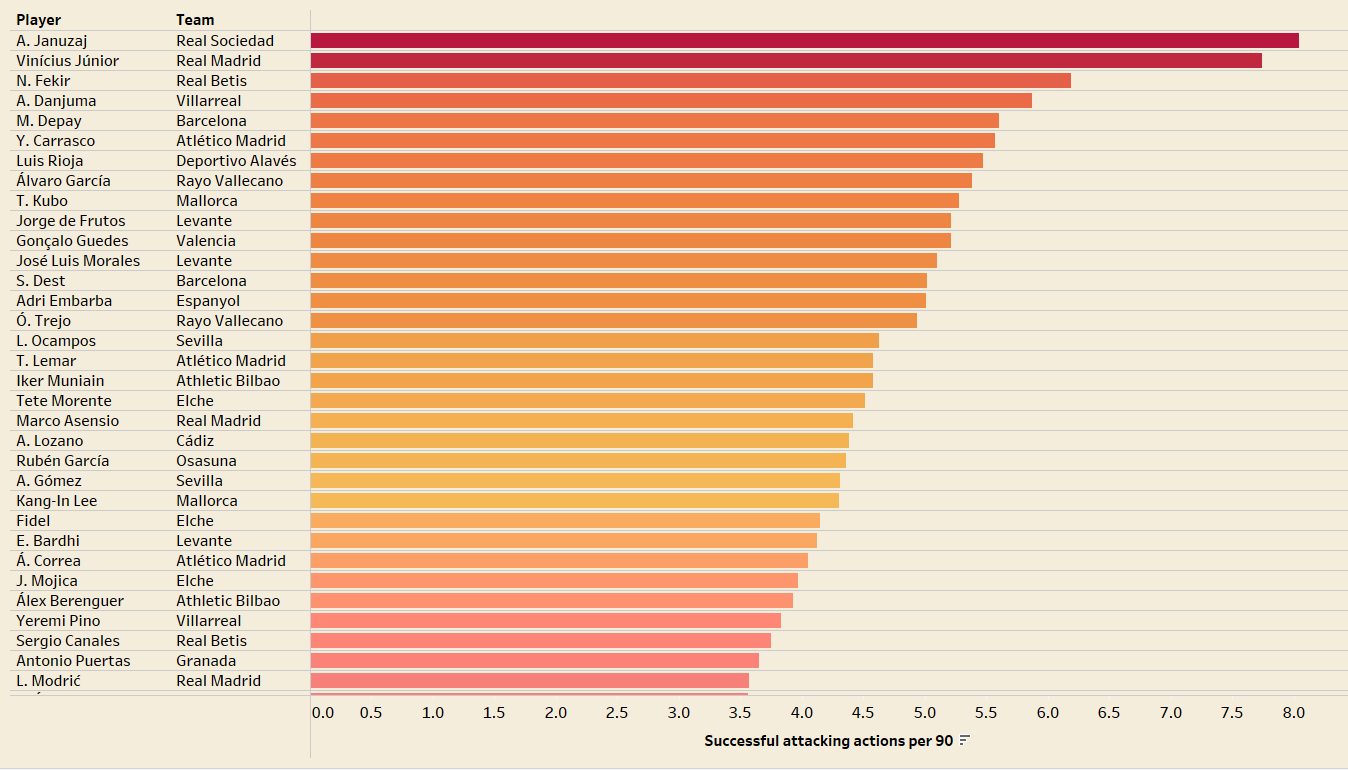 We will look at some of Januzaj’s best attributes in the remainder of this analysis to see if his performance confirms his impressive data.

As the data showed, Januzaj is one of the best dribblers in the league. He is a player who is deceptively quick and shows an impressive acceleration to get away from his man. He uses great control of the ball to manipulate defenders and to expose space within the opposition defensive line. Below will show a couple of examples to fully show the quality of Januzaj’s dribbling. The first example comes against Real Madrid and Januzaj has just received the ball infield.

Once he manages to get to the by-line, he looks to find a cut back to striker Aleksander Isaak, as shown below.

The second example is, against Osasuna, this time Januzaj receives the ball much deeper in the opposition half, it starts with a simple pass into Januzaj, with lots of space in front of him he carries the ball into the space. He manages to carry the ball into the space, before facing increasing defensive numbers by Osasuna.  The image below shows the situation Januzaj finds himself in.

Januzaj manages to beat the second defender for speed before allowing the third defender to come across by cutting the ball back inside and swiftly getting past the defender. He manages to get in the box before a last-ditch Osasuna tackle stops the run, despite Real Sociedad’s appeals for a penalty it was not given.

Both of these examples show how Januzai has managed to carry the ball high up the pitch with relative ease but also take the ball into dangerous areas and potentially create goal-scoring opportunities for his team.

When analysing Januzaj his ability and quality on the ball becomes apparent, especially with his passing, which can be backed up by the data where Januzaj has been very impressive in Smart passes per 90 and key passes per 90.  The examples below should demonstrate these passes in action.

Here Januzaj has got the ball in the left inside half-space, and there is a space between the Alaves right-back and centre-back. This can often occur when a team plays with good width. Januzaj looks to play a left-footed pass into the highlighted space in the box.  This is met by on running Real Sociedad player.

The receiving player manages to get hold of the ball before firing a pass across the face of the goal, creating a dangerous opportunity.

The next example comes on the other side when Januzaj is playing on the right. He receives the ball with the defender quickly closing him down. He takes on touch onto his left foot before playing an exquisite, clipped pass over the opposition defensive line, to Aleksander Isak in the box.

Isak gathers the ball in the box and manages to get a shot off which forces a save from the Granada goalkeeper.

Both of the following passes show how Januzaj has the ability to break the opposition defensive line and create goal-scoring opportunities for his team. He possesses’ great vision to see these passes but also the quality to execute them with great touch and finesse, which is what makes Januzaj so effective with the ball at his feet.

This summer will probably see many clubs spend big on attacking players, in the hope they can consistently create good quality chances for the team. This is not saying this is a bad idea however there is the potential to attain that with someone like Januzaj who will cost nothing in terms of a transfer fee. Now, he will most likely acquire big wages, but they are probably worth it considering there will be no transfer fee. It will be interesting to see who picks up Januzaj and to see which teams are smart enough to act on such an impressive player.