Malcolm Ebiowei: Why Crystal Palace have pulled off a masterstroke to sign one of England’s most exciting teenagers – scout report

The last twelve months were topsy-turvy for Derby County fans, being forced to watch chaos ensue off the field, rapidly develop and worsen into a terrifying state while being plunged down into the unknown depths of England’s third-tier after a 21-point deduction.

However, pride echoed throughout Pride Park throughout the season, really making the ground earn its name. Wayne Rooney blocked out the noise from outside to deliver some memorable victories for the Rams.

Derby’s squad was severely limited over the course of the campaign as the Manchester United legend was forced to promote numerous players from the youth ranks. But the brightest of lights will shine the loudest in a dark vacuum.

One of these bright lights for Derby was Malcolm Ebiowei. At just 18, Ebiowei made a massive impact on the team towards the back end of the season, showing real mental and physical maturity to play in such a competitive league.

While a poisonously memorable season has now drawn to a close, Derby’s financial frailties have continued. Ebiowei’s contract is running out at the end of the current month and the young English forward looks set to leave for nothing.

Man United and Crystal Palace were the favourites to sign the teenager but Patrick Vieira’s Eagles managed to win the race, offering Ebiowei a better chance to develop.

This tactical analysis piece will be a scout report of the young Derby star. It will be an analysis of his strengths and weaknesses as well as how Rooney utilised the versatile forward within his fluid tactics.

Having applied his trade with Arsenal and Rangers prior to moving to Derby in 2021, Ebiowei developed a name for himself as being a tricky winger with a wand of a left foot, something he never lost in the professional game.

For a left-footed and skilful wide-forward, Ebiowei certainly doesn’t fit into the archetype of having a more-slight build. The youngster stands tall at 6ft, or 185cm, and does possess quite a large frame, allowing him to use his body to hold off defenders, but he’s not large enough for it to prove detrimental to his ability to carry and dribble with the ball.

At 18, there could still be some room for him to grow, although it’s likelier that Ebiowei’s physical stature will not change much henceforth.

Ebiowei has mainly been used as a right-winger in a 4-2-3-1 by Rooney although the Dutch-born star is no stranger to being played in a deeper role or even further forward depending on whether Derby were structured in a 4-3-3 or a 4-1-4-1. 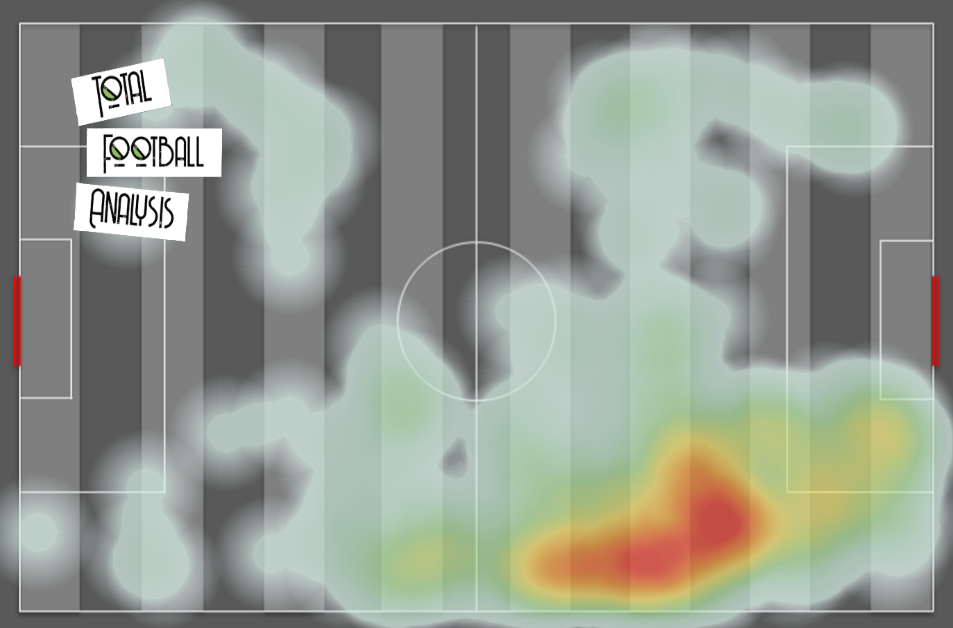 Before going in-depth in this scout report on Ebiowei’s tactical role and habits during games, his heatmap is a data visual that can paint a thousand words.

Ebiowei’s main position is on the right but instead of pushing into the halfspace, allowing the fullback to bomb on, the young winger hugs the touchline before driving inside to the box. As will be analysed in further detail later in this article, Rooney sets up the team in possession in a way that facilitates Ebiowei to use his strengths out wide.

Furthermore, not only can Ebiowei play on the right, but Rooney has also utilised the teenager out on the left flank also, and even allows the Englishman to drop deep to receive the ball during settled positional attacks.

In days gone by, there was one type of winger and one only. Players such as Ryan Giggs and Andrei Kanchelskis held the width on the flanks, hugged the touchline and put balls into the box, taking on the opposition’s fullback. Generally, left-footers stayed on the left and right-footers were put out on the right to whip outswinging crosses into the area.

Nowadays, in the modern game, fullbacks overlap and play as high as wingers at times. To facilitate this, the wide-men move into the halfspaces. However, Ebiowei is more of a hybrid of the two. 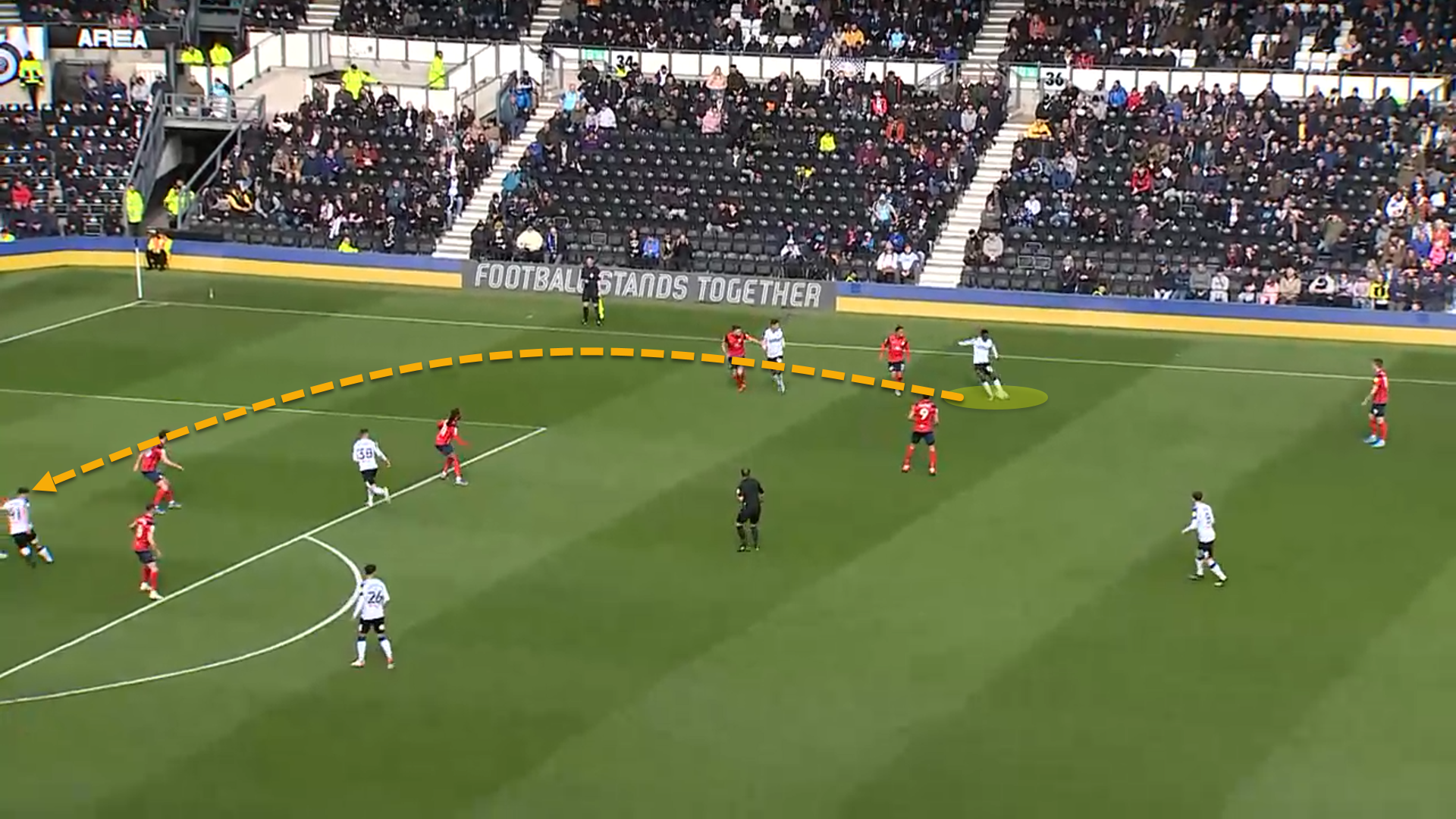 Ebiowei is a left-footer who majorly plays out on the right. The 18-year-old usually hugs the touchline when Derby are in the final third, receiving the ball on his left and cutting inside to whip inswinging balls into the penalty box for players to attack with purpose. The wanted forward combines the traditional with the progressive era of the beautiful game.

On average per 90, Ebiowei crossed the ball 4.27 times over the course of the 2021/22 campaign for Derby with an accuracy of 26.5 percent. A bit of improvement is needed on this front, although he did still manage to bag 0.17 assists per 90 in total and boasted an average of 0.9 xA per 90.

As Ebiowei holds the width on the right side for Derby, Rooney ensures that himself and the right-back do not clash by positioning the latter in the halfspace. 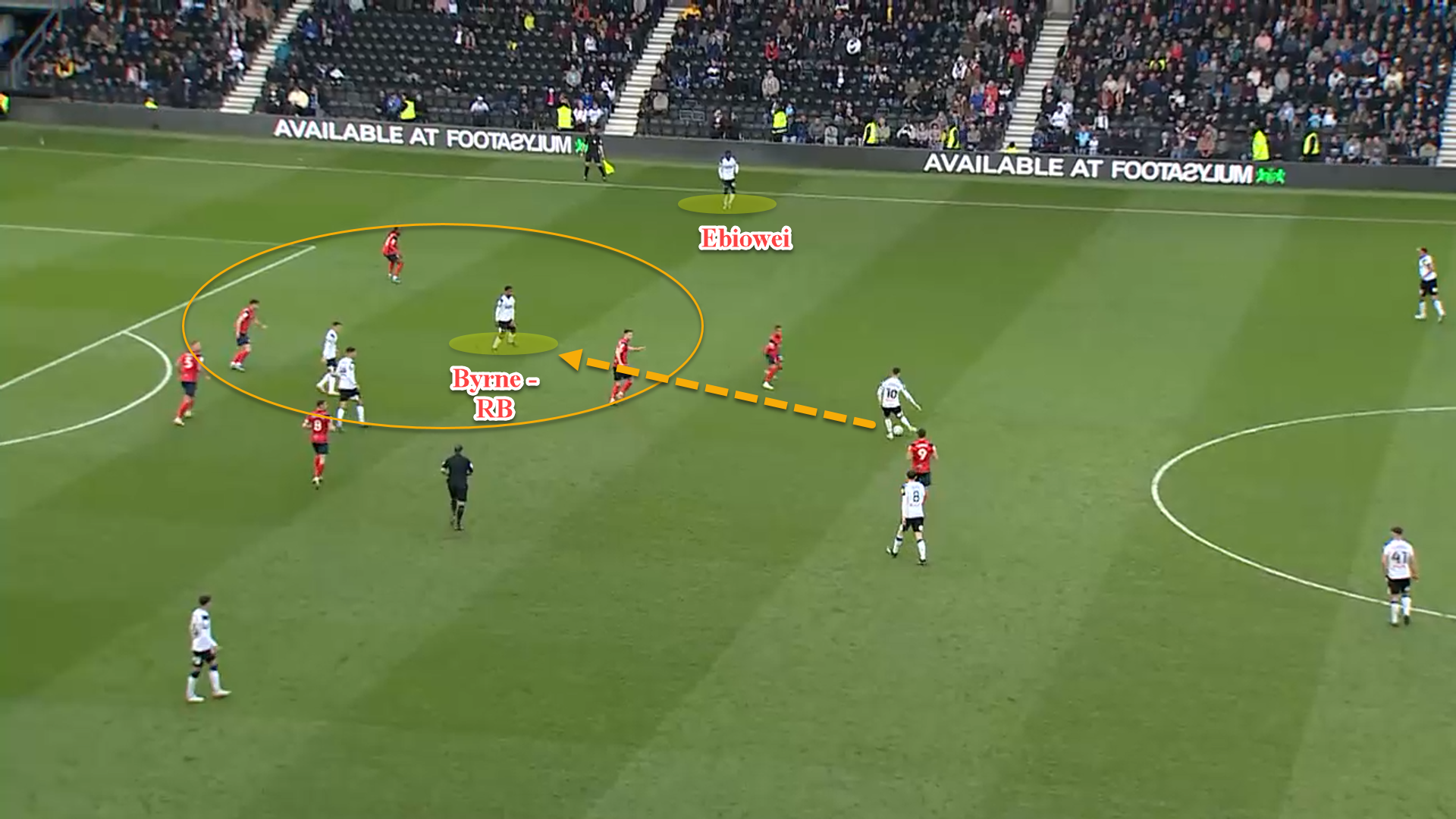 In this example, right fullback Nathan Byrne is extremely high up the pitch, placing himself between the lines in the halfspace between the opposition wingback and centre-back. As a result, Ebiowei is free to receive out on the right to work his magic. For the most part, teams take the opposite approach to this, such as Liverpool who place their wingers inside and keep the fullbacks holding the width.

While Ebiowei is a creative option for Derby due to his ability to put serious whip on the ball, making it difficult for defenders to clear away, the youngster also has a personal preference for running at his marker. 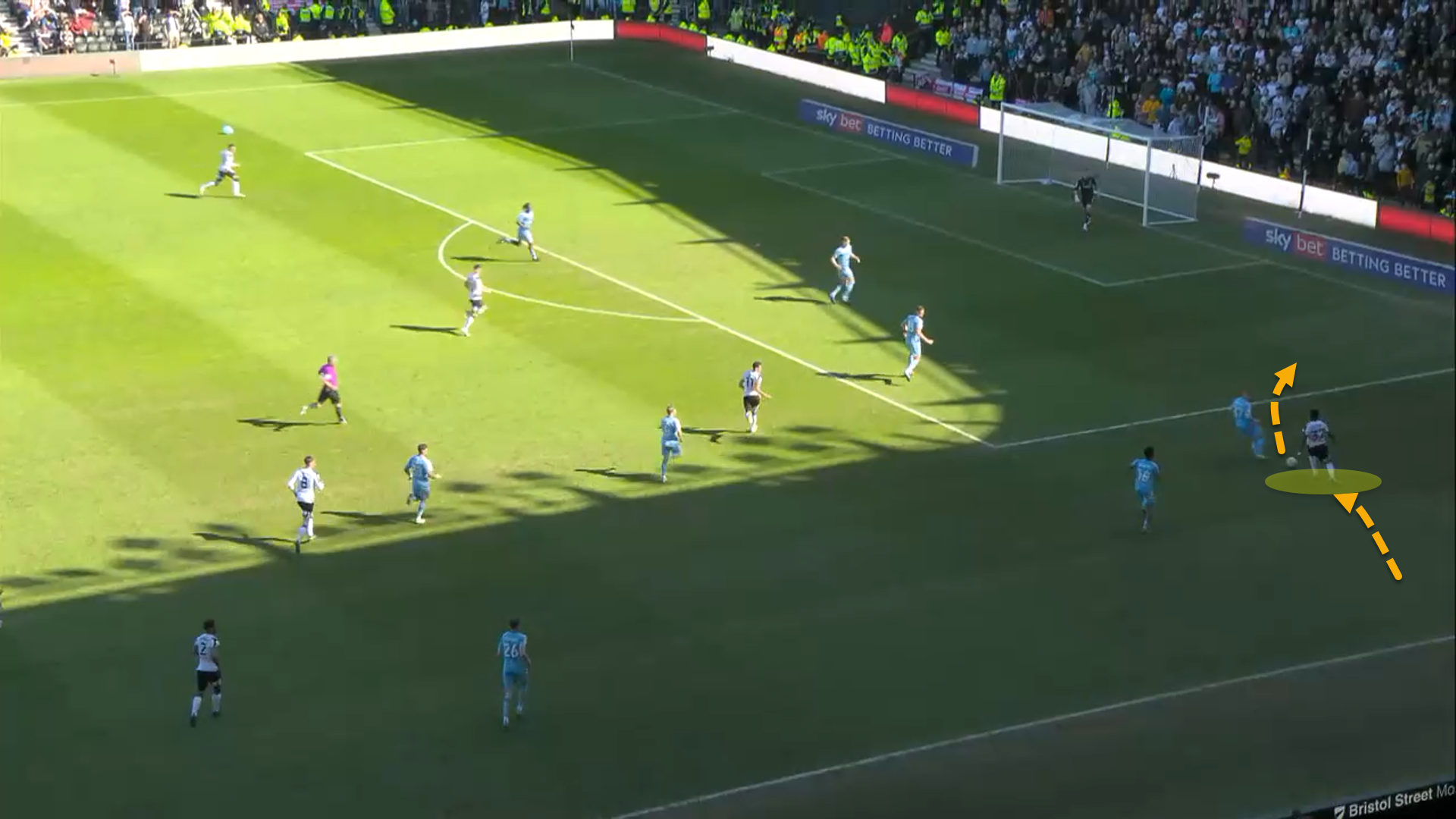 Ebiowei has a wonderful habit of pushing the ball to the outside before dropping his shoulder and quickly moving it back inside to get away from his man before either shooting or smashing it across the box for someone else.

The 18-year-old possesses quick feet and obscene pace, making him very difficult to stop. Last season, Ebiowei attempted 13.59 dribbles per 90, with a success rate of 48.1 percent. Dribbling is undoubtedly one of his best attributes and makes him a real handful for defenders.

The Derby star is particularly terrifying in transition when bearing down on his challenger in a 1v1 situation. 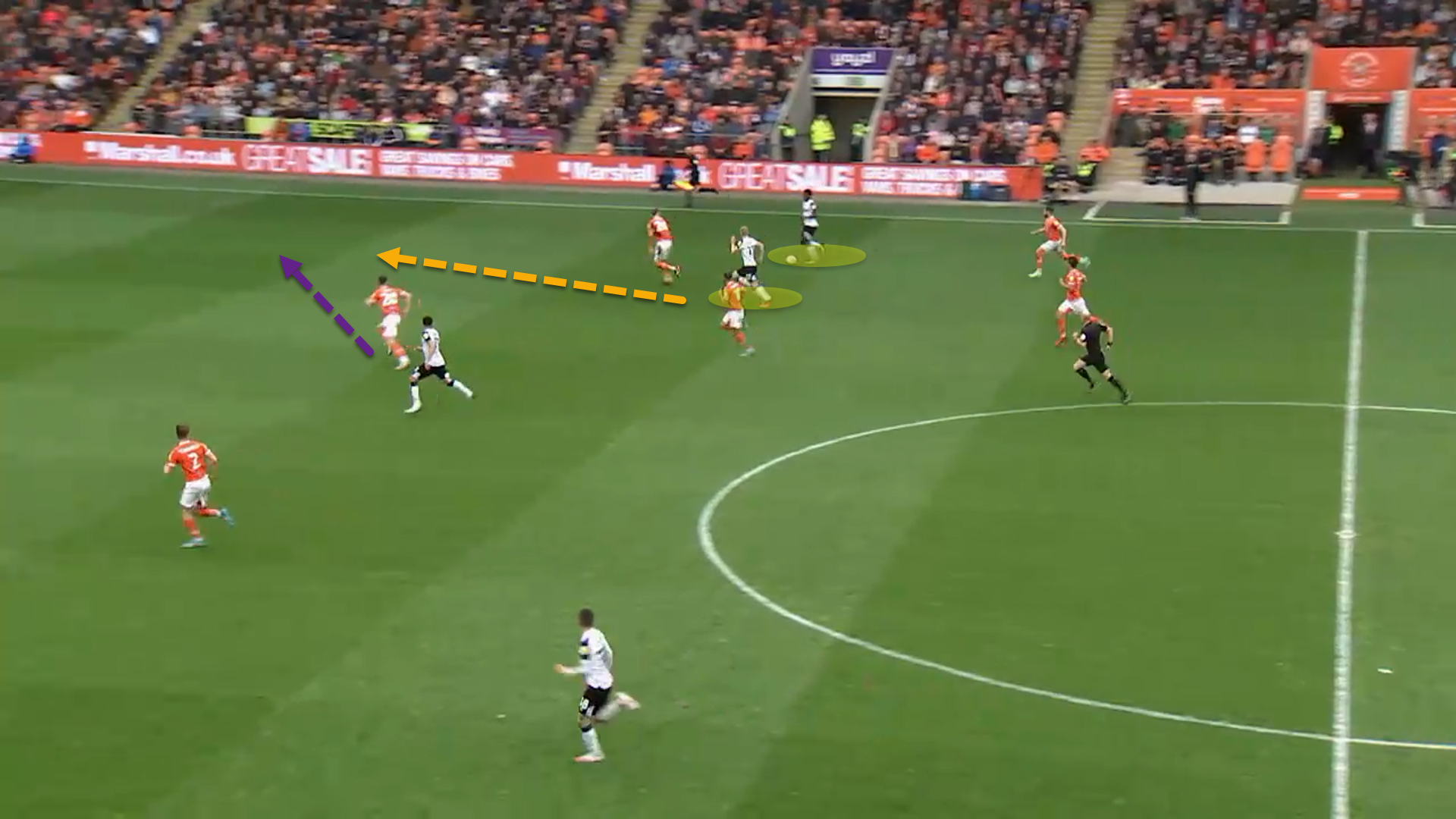 Here, while the Rams are attacking on the break with Ebiowei’s lightning speed, the Blackpool defender is already anticipating the winger either beating his partner or slipping the nearest runner in behind and has begun to move out to cover, showing the quality Ebiowei has.

It’s rather difficult to quantify Ebiowei’s style of play into one category. He’s not just a creator, with the sole focus of providing for others. The young winger also wants to score goals himself, sort of like the type of footballer his manager was during his own playing career.

Nevertheless, Ebiowei’s goalscoring record isn’t wonderful yet, but it’s certainly not for the want of trying. Averaging 1.83 shots per 90, just 28 percent of the teenager’s strikes on goal hit the target. Furthermore, Ebiowei’s xG per 90 stood at 0.15.

Even worse yet is that Ebiowei scored 0.09 goals per 90 last season in all competitions. One of the main reasons behind his poor stats in front of goal is because of the average range of each strike. 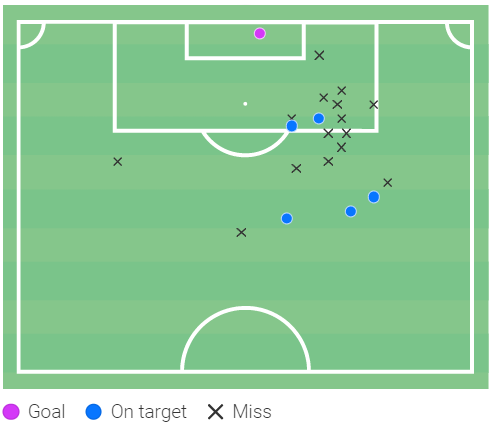 Ebiowei took just one shot inside the six-yard box for Derby. Coincidentally, it ended in a goal. However, quite a large quantity of his shots have been low-quality chances outside the penalty area. Over the course of the season, Ebiowei managed to get just six of his strikes on target.

The Derby man likes to cut inside on his left foot and try to bend it home which seems great in principle but is extremely difficult to execute consistently. 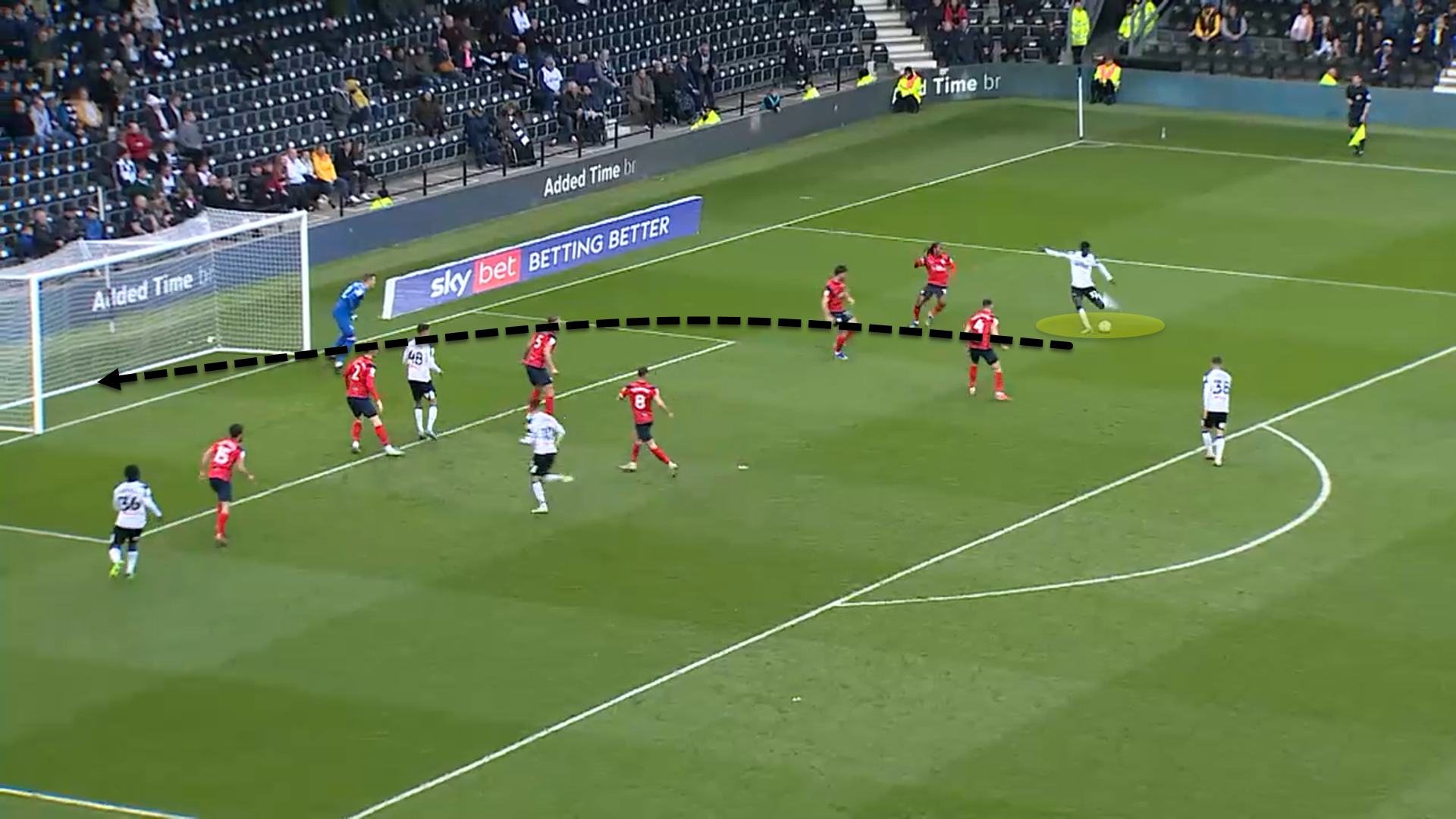 When the ball is over on the opposite flank in the final third, Ebiowei’s goalscoring instincts kick in. The winger always moves to the back-post, often in the channel between the opponent’s fullback and centre-back, hoping to get on the end of a cross.

In one of the final games of the season for Derby, against Blackpool, Ebiowei got his reward for his persistency to do this in the attacking third, latching onto the end of a low cross at the back-stick after a fumble from the opposition’s defenders. 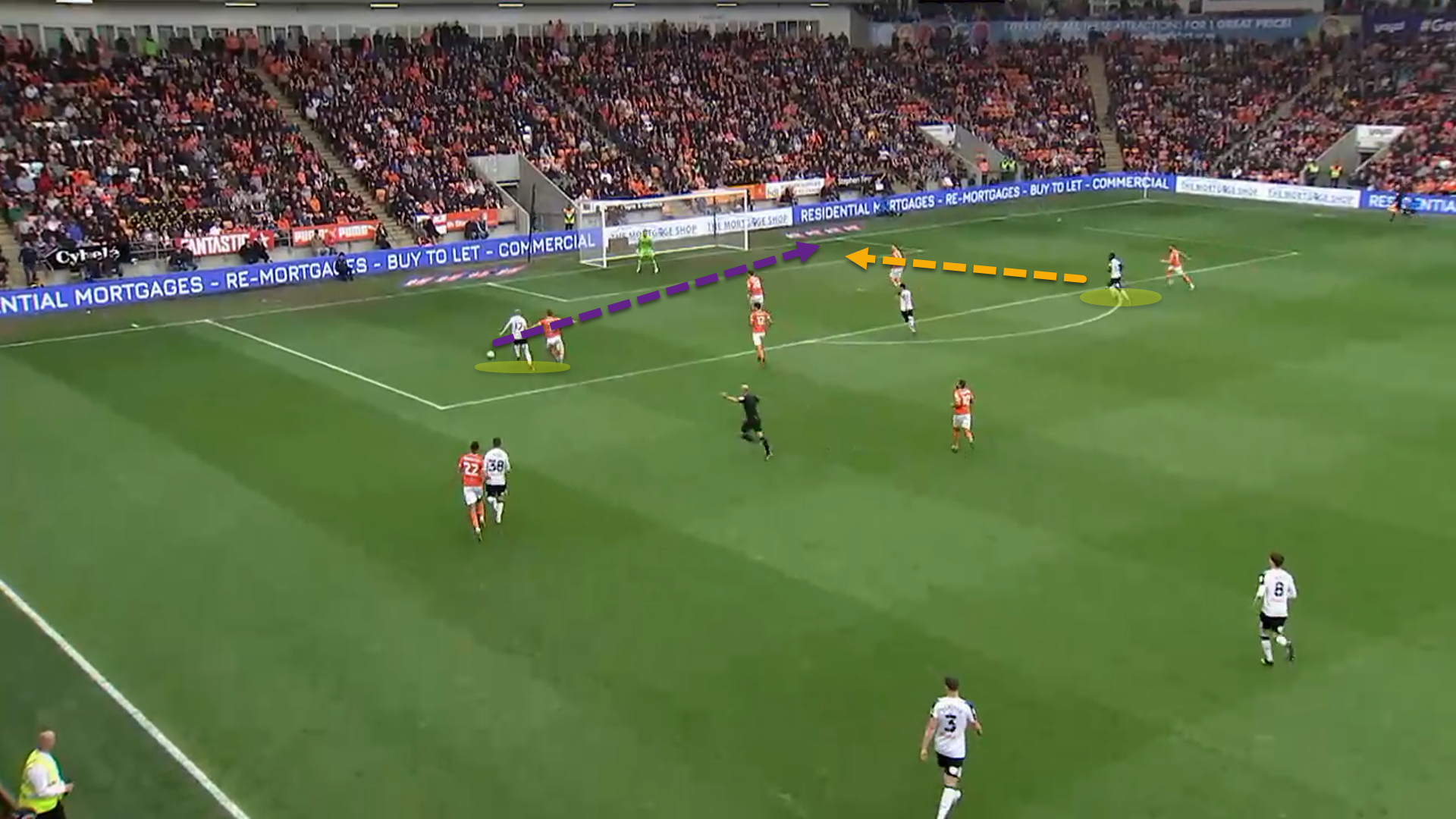 Despite having a tendency to hang at the back-post during games, Ebiowei is poor in the air, meaning that low crosses are the only realistic way he will score from balls out wide.

Even though he is 6 foot, Ebiowei competes in merely 1.8 aerial duels per 90, winning just 18.1 percent. The youngster definitely needs to improve on this statistic. Not being tall cannot really be used as a fair excuse in his case.

Generally, young forwards are quite raw and rough around the edges from a tactical perspective. While there are still some issues in Ebiowei’s game, the wanted Derby star has shown real maturity in the defensive phases under Rooney.

Rooney rewarded Ebiowei with consistent minutes without being afraid that the overall structure out of possession would be upset by his inexperience.

One of the most impressive aspects of Ebiowei’s game is his press. Derby always press in a high or a medium-level block and the 18-year-old has been a handful for opposition teams who were attempting to progress into deeper areas of the pitch. 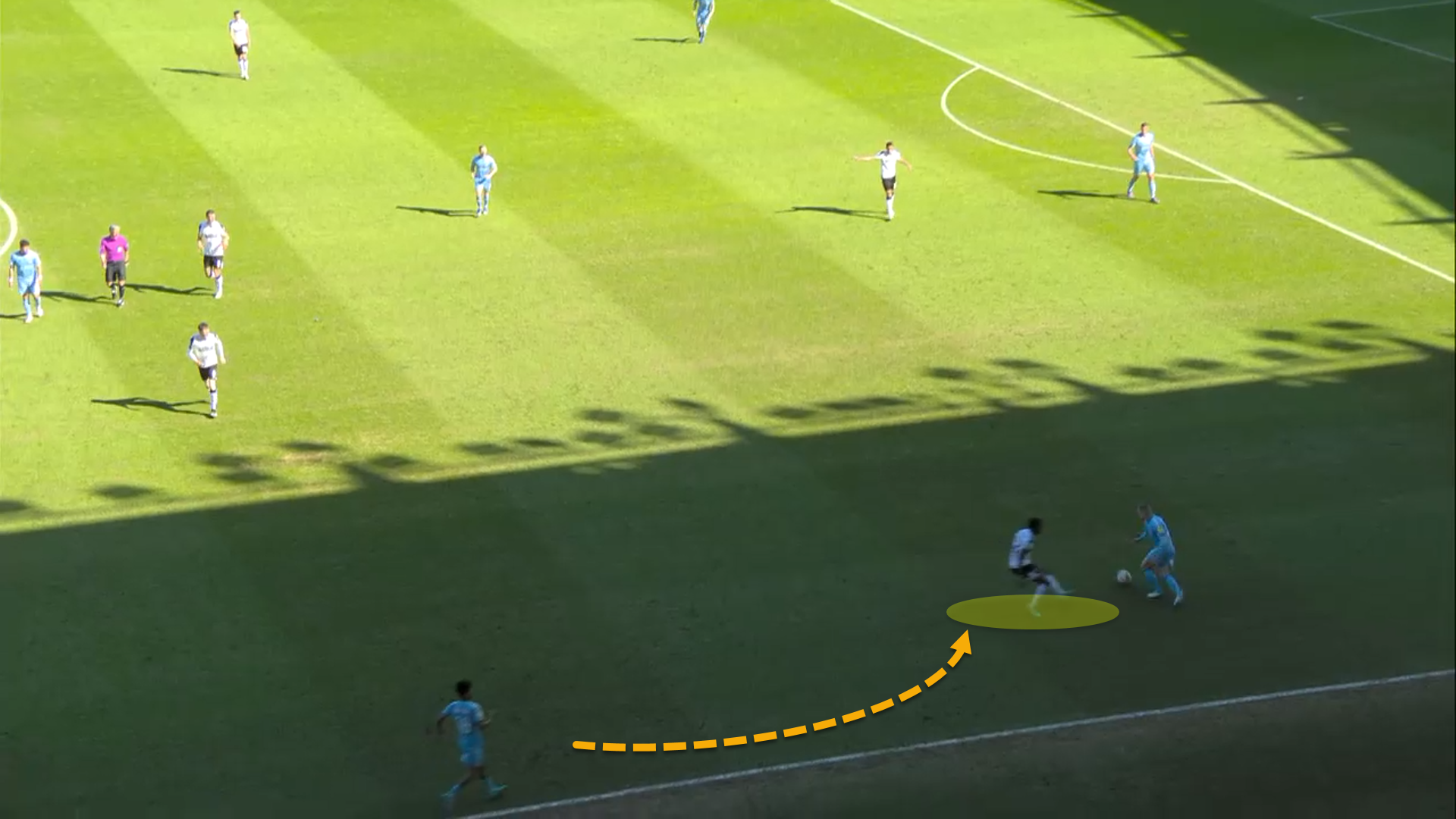 Derby County press from out to in under Rooney, forcing the opposition to play inside while denying them from building out wide.

Hence, in the previous image, Ebiowei has pressed the Coventry centre-back, angling his pressure to block off the passing lane into the Sky Blues’ wingback on the left, causing the ball-carrier to run inside into Derby’s trap.

Ebiowei averaged 3.48 ball recoveries last season for the Rams in all competitions, with 47.5 percent coming from inside the opposition’s own half of the pitch.

Moreover, Ebiowei has also shown a really impressive ability to read the game well, often cutting out passes from the opponent to regain possession for Derby. In the 2021/22 campaign, the youngster averaged 2.35 interceptions per 90. 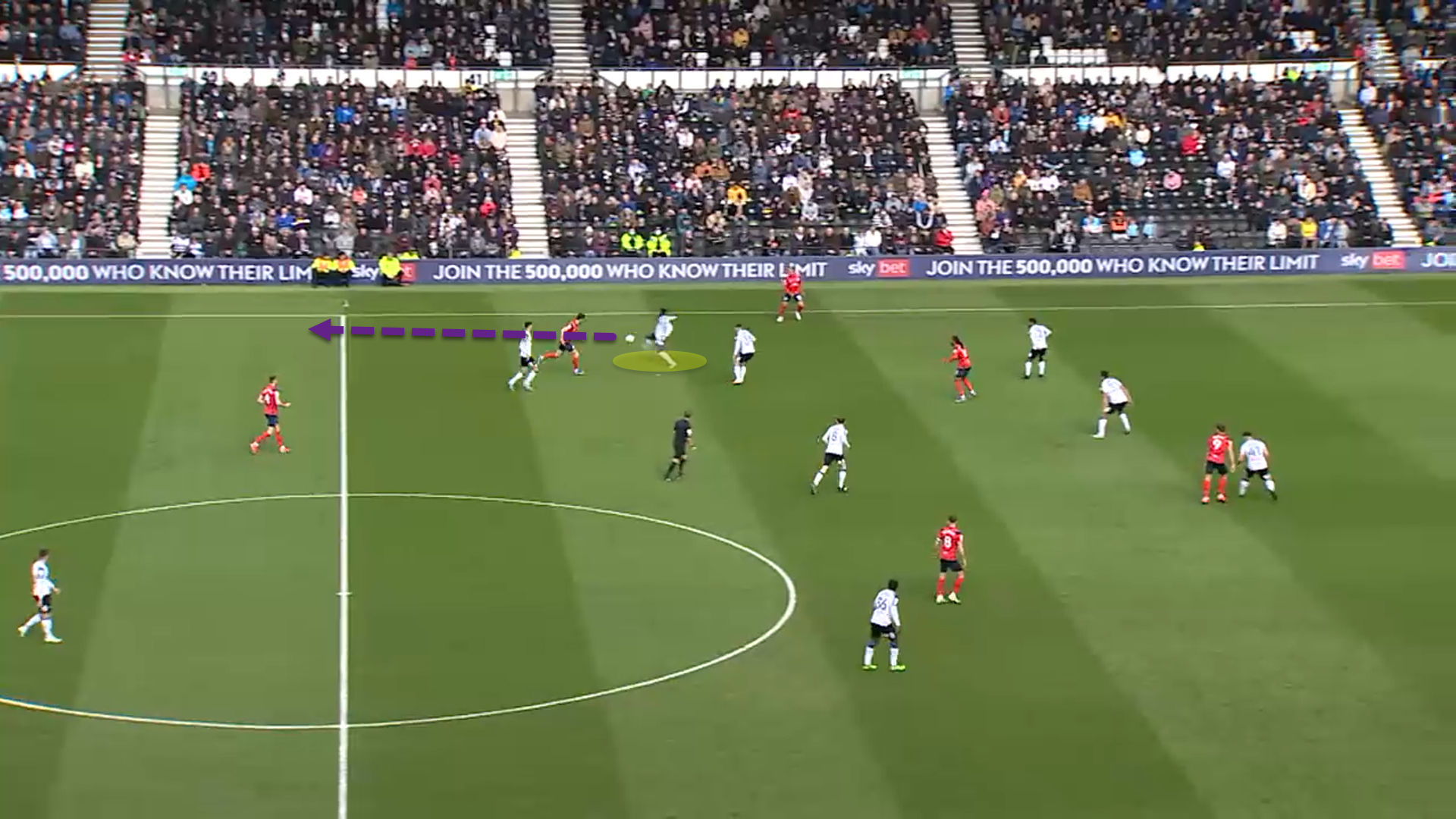 Here, Ebiowei easily read a pass from Preston North End, before nipping the ball and darting forward with speed to lead the counterattack.

The winger is deadly on the break, as touched upon in the previous section. This has a lot to do with Ebiowei being given more room to dribble into during attacking transitions as the player averaged 4.7 progressive runs in the season that has just ended.

It is for this reason that, when Derby are defending in their own defensive third, Rooney has generally instructed Ebiowei to remain higher up the pitch, ready to pounce on the counterattack should the new League One team regain the ball. 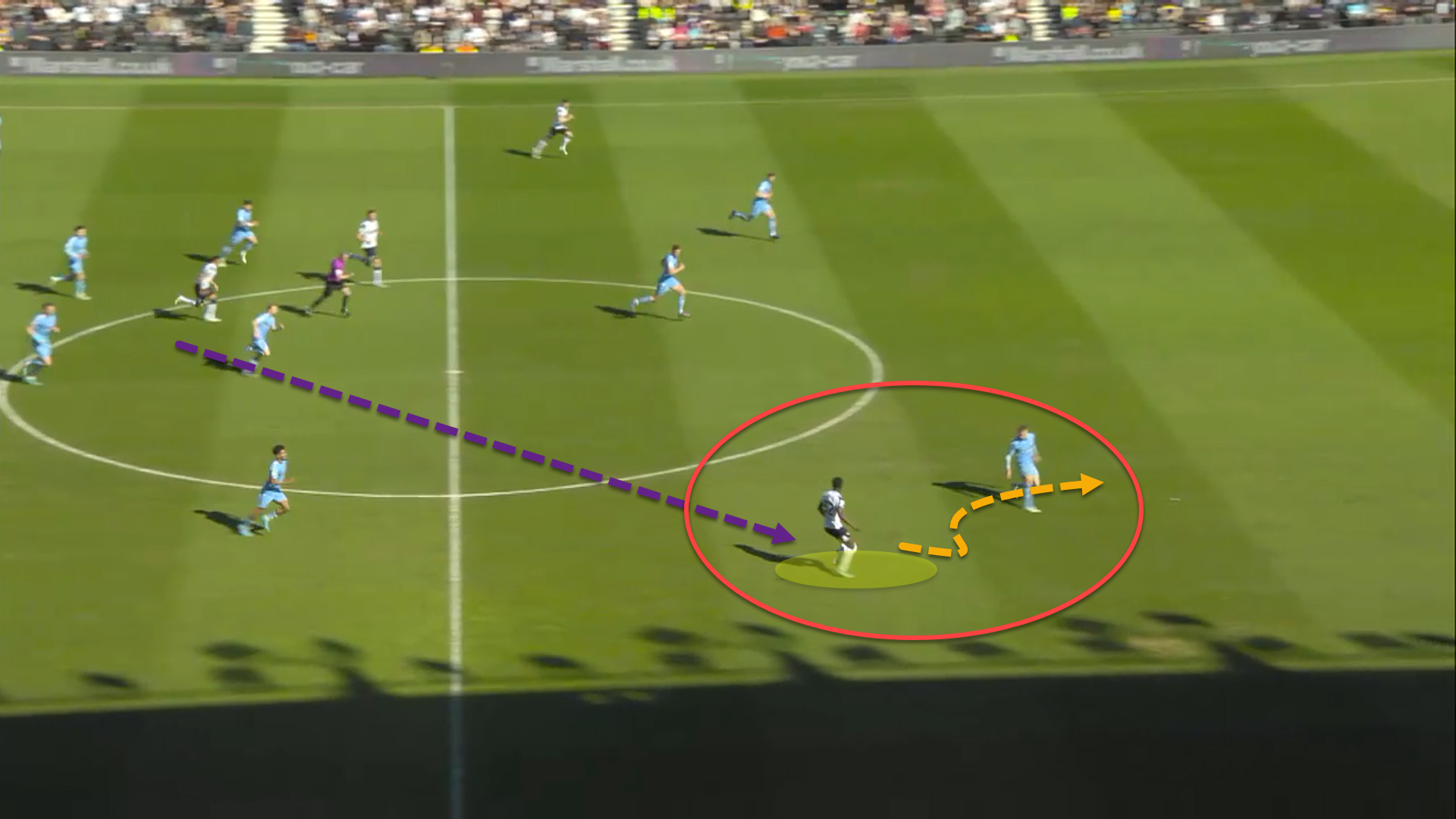 Being realistic, Ebiowei is perhaps not ready for Premier League football just yet. Crystal Palace won the race for the youngster’s signature, but he is unlikely to receive much game-time at the current stage of his career.

But that doesn’t mean he has made a mistake moving there. However, it’s quite probable that Ebiowei will be loaned out to the Championship or potentially even back out to Derby County to prevent any stifling of his development at such an early age.

There is a potentially great player in Ebiowei. With game-time, managerial encouragement and the right club culture, the teenager could mature into a wonderful asset in the near future. 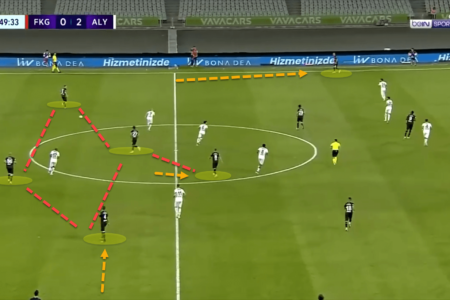 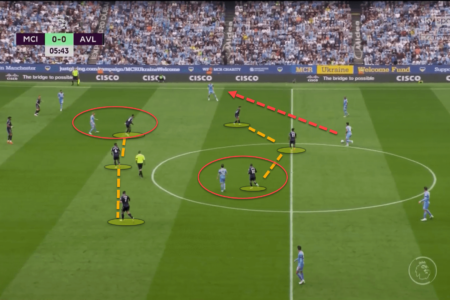 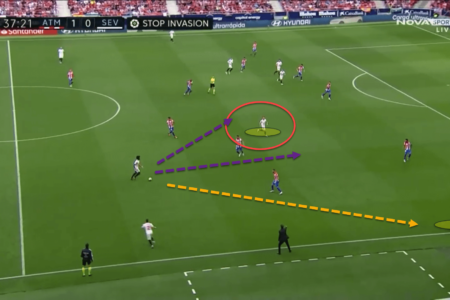