KV Mechelen had a successful season last term under the tutelage of Wouter Vrancken, with the club finishing in seventh place during the regular season to make it into the European playoffs. One key contributor to this success was 25-year-old Belgian forward Hugo Cuypers, who in 34 appearances last season, managed 13 goals and 8 assists. After those performances in the last campaign, KAA Gent decided to pay a modest fee of just under €3 million for the services of the forward.

This scout report and tactical analysis will take a look at the strengths of Cuypers, as well as where he may fit in Hein Vanhaezebrouck’s system at Gent. 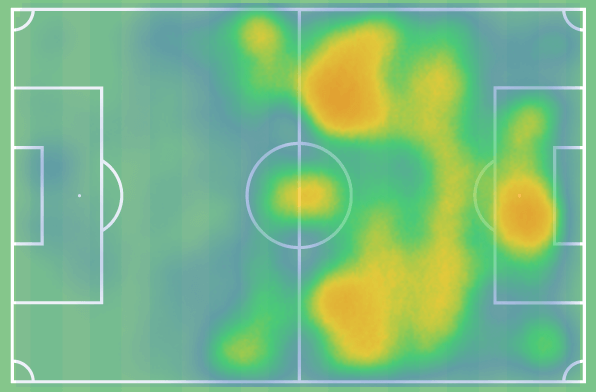 Though at Mechelen Hugo Cuypers was deployed as the centre-forward in a 4-2-3-1 system; as the heat map above shows, he likes to drop into the pockets of space in midfield to link the play together and get on the ball. At Mechelen, he was part of a potent attacking quartet, with these forward players constantly interchanging positions with each other. Cuypers also went relatively under the radar during his time last season with Mechelen, with the other attacking players, most notably Nikola Storm, getting the majority of the attention.

However, going to Gent represents a change in the style of play as well as the system for Cuypers. Under Vanhaezebrouck, Gent have opted to utilise a 3-4-1-2 system, with Cuypers likely going to be playing as one of the two strikers, or as the number ’10’ behind them. This stylistic change should not negatively impact Cuypers however, with his ability to play in either position making him likely to become a key part of the project that is developing at Gent under Vanhaezebrouck.

It may seem strange starting off a scout report on a forward player with a look at their defensive work rate, but in the case of Cuypers, it is one of his biggest strengths. He was arguably Mechelen’s best defensive forward last season, with Cuypers the one who normally looked to put pressure on opposition defenders or make ball recoveries in the attacking third.

In fact, last season, the former Ajaccio loanee made 3.74 recoveries per 90 minutes for Mechelen, with 65.8% of them coming in the opposition’s half. The following examples for this section will take a look at the defensive work rate of Hugo Cuypers; and more specifically, his pressing, and ability to consistently make recoveries in the opposition’s half of the pitch. 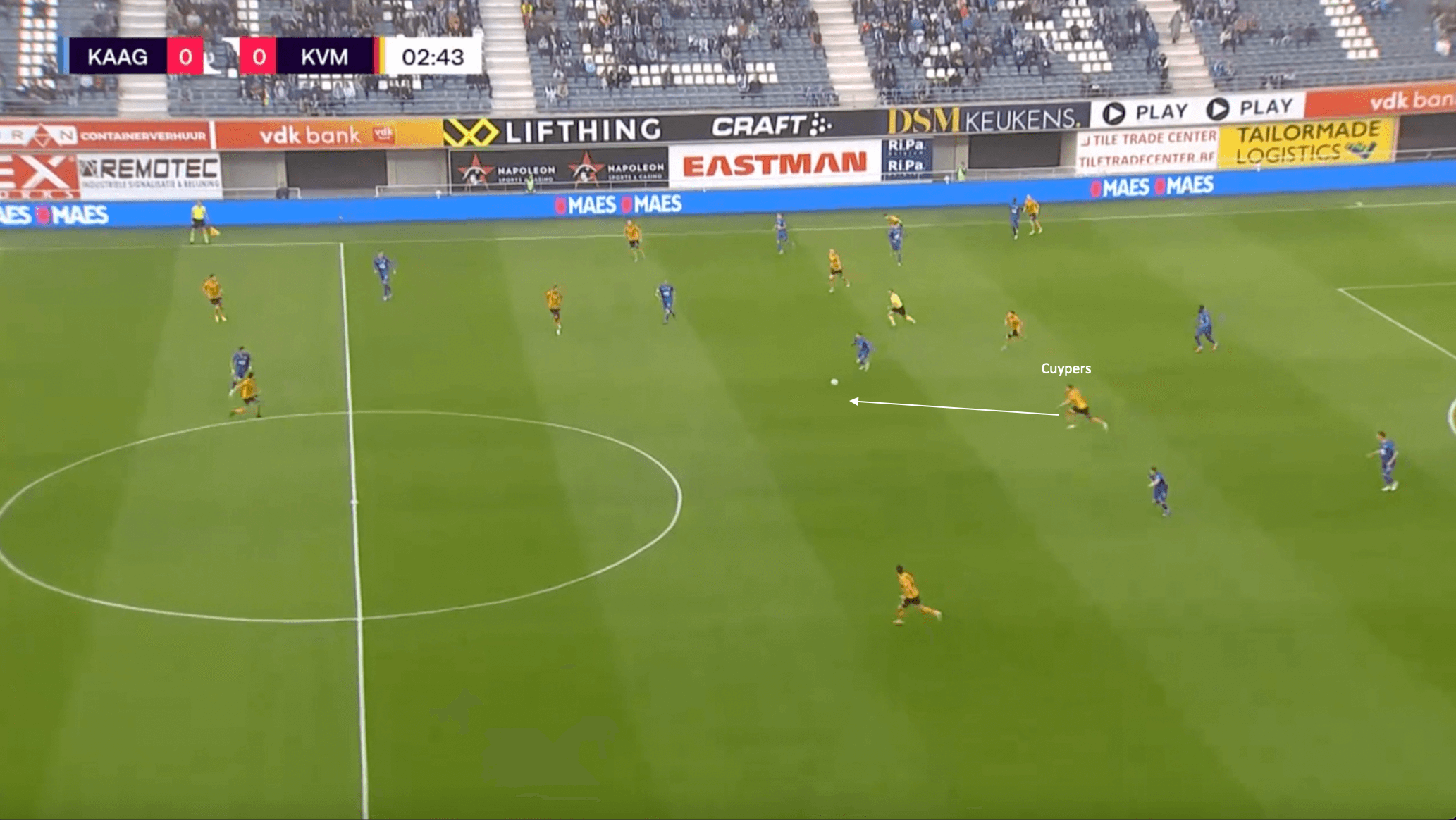 The image above shows a prime example of the type of work rate that Gent are getting with the signing of Hugo Cuypers. After some pressure from the Mechelen players near the far touchline, the ball is eventually cleared into the centre of the pitch in Gent’s defensive third. Seeing an opportunity to pounce, Cuypers tracks back all the way from his central striker position to challenge the Gent midfielder for the ball, winning back possession, and starting a new attacking sequence for Mechelen as a result. 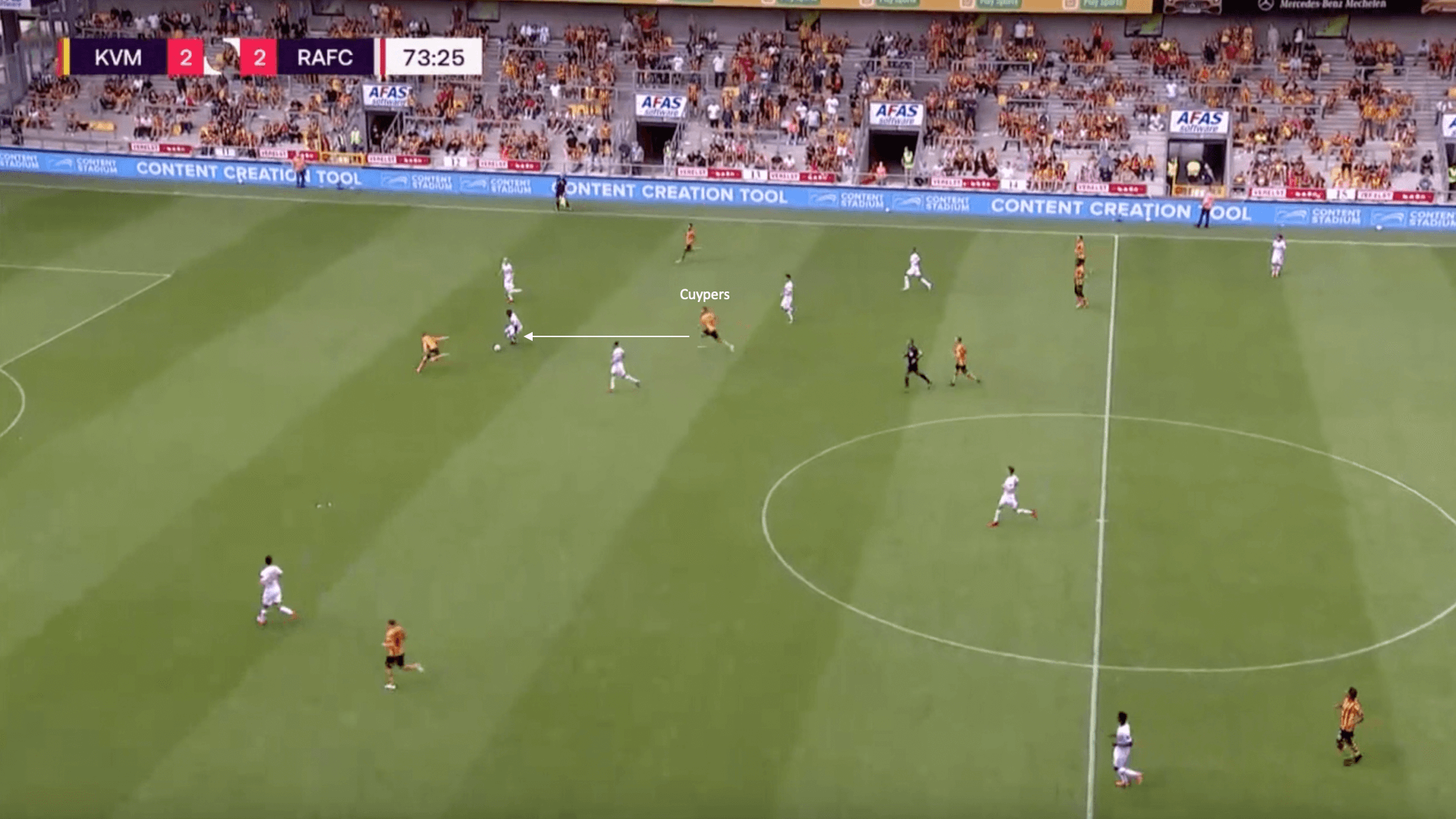 Above, shows another example of Hugo Cuypers defensive work rate, with this recovery leading to a goal for Mechelen. Preceding this image was an attacking phase for Mechelen where the furthest player forward is dispossessed by the opposition defender. As the defender looks to gather himself and hold possession, Cuypers comes flying in from a deeper position and is able to win possession back from the opposition defender. Cuypers’ tackle allows the ball to find the Mechelen forward, who after moving to the edge of the penalty box, shoots and scores to give Mechelen the lead. This goal for Mechelen comes from the never-ending work rate of Hugo Cuypers. 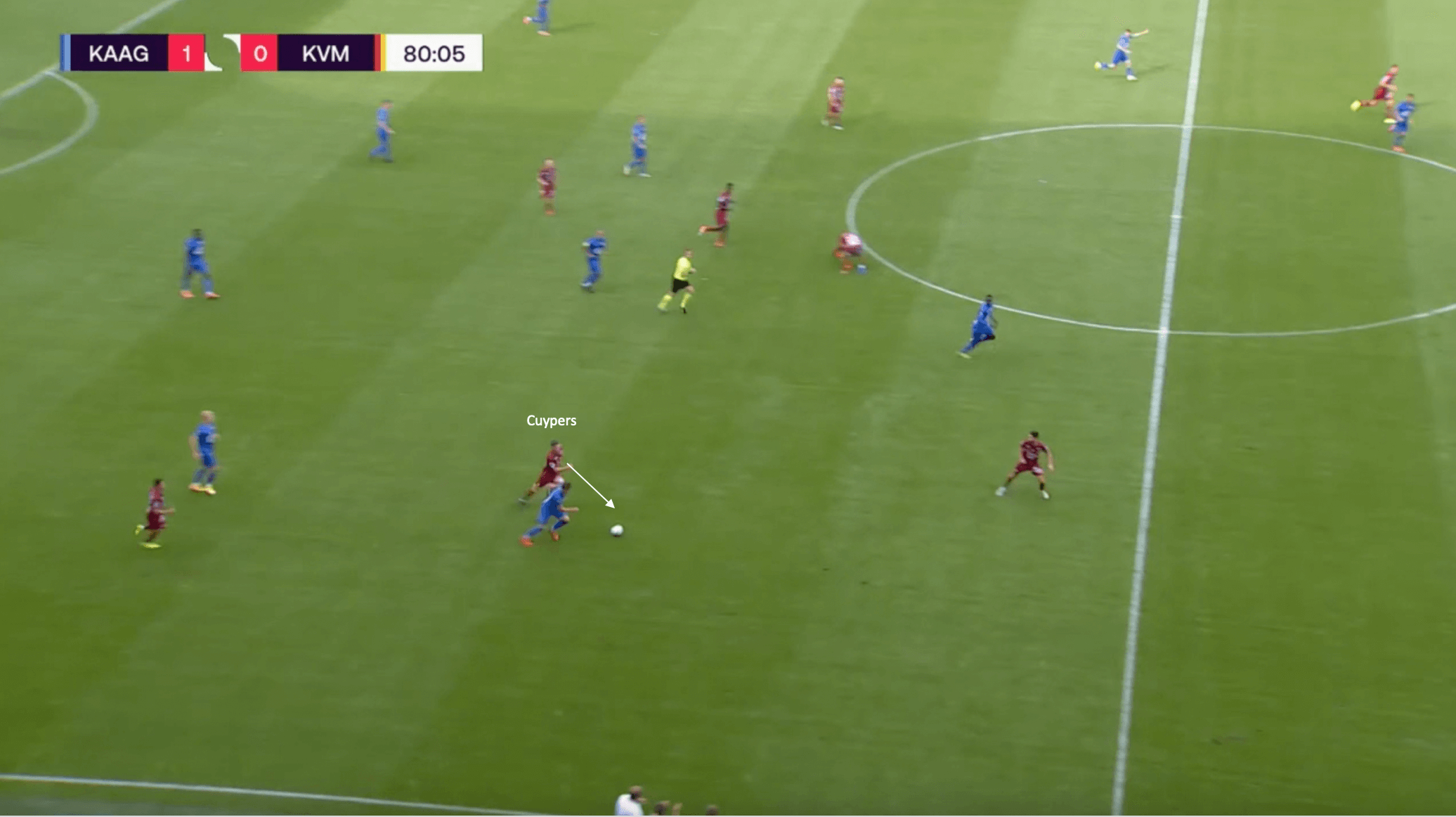 The key thing that this strength of Hugo Cuypers does is prevent the opposition from breaking into quick counter-attacking sequences when they win possession back. In the image above against Gent, possession is won back by Gent in their defensive third, with the player in possession looking to start a quick counterattack. However, Cuypers has already tracked back to attempt to regain possession. The Gent player takes a heavy touch, which Cuypers takes full advantage of, recovering the ball in the Gent half before starting an attacking phase once again for Mechelen. 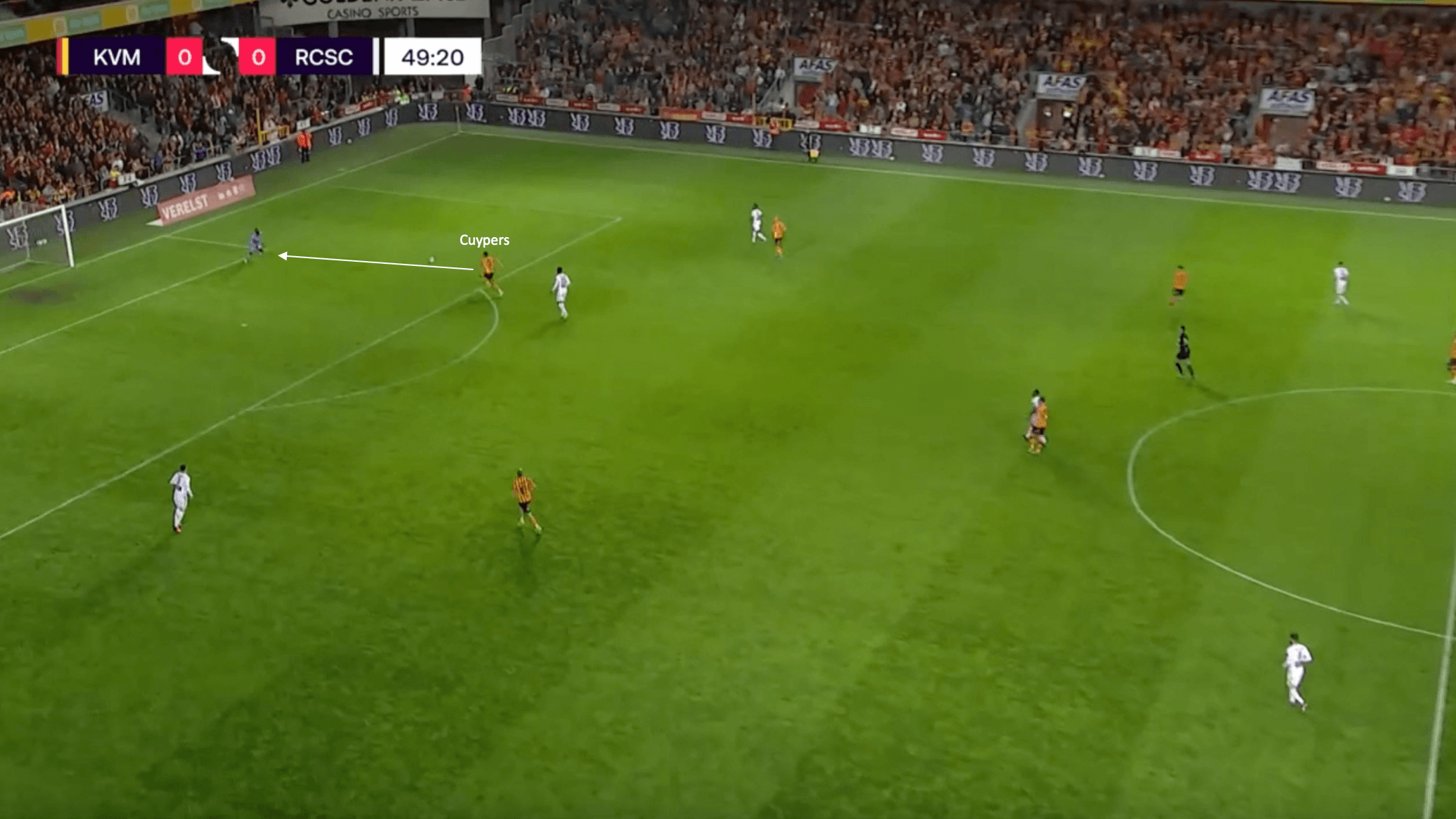 It’s not just in the opposition’s third of the pitch where Hug Cuypers uses his intense defensive work rate. In the phase of play above, the opposition are playing out from the back, with the defender playing the ball back to his goalkeeper. Cuypers is instantly able to put pressure on the keeper, winning possession back from him as a result. Though no goal results, it still shows the danger Cuypers is to sides that attempt to build out from the back.

Next season, Gent will be getting a forward with pressing energy that never quits, which should be a massive benefit to Hein Vanhaezebrouck.

As the heat map from the earlier section displayed, Hugo Cuypers is not a centre-forward who stays advanced, pinning the opposition defensive line back and making runs into the channels. While this is also part of his game, Cuypers likes to also drop into deeper positions in midfield, looking for the pockets of space to receive possession and link play together. With 8 assists to his name last season for Mechelen, linking play should be considered one of his strengths. This section will show some examples of this link play. 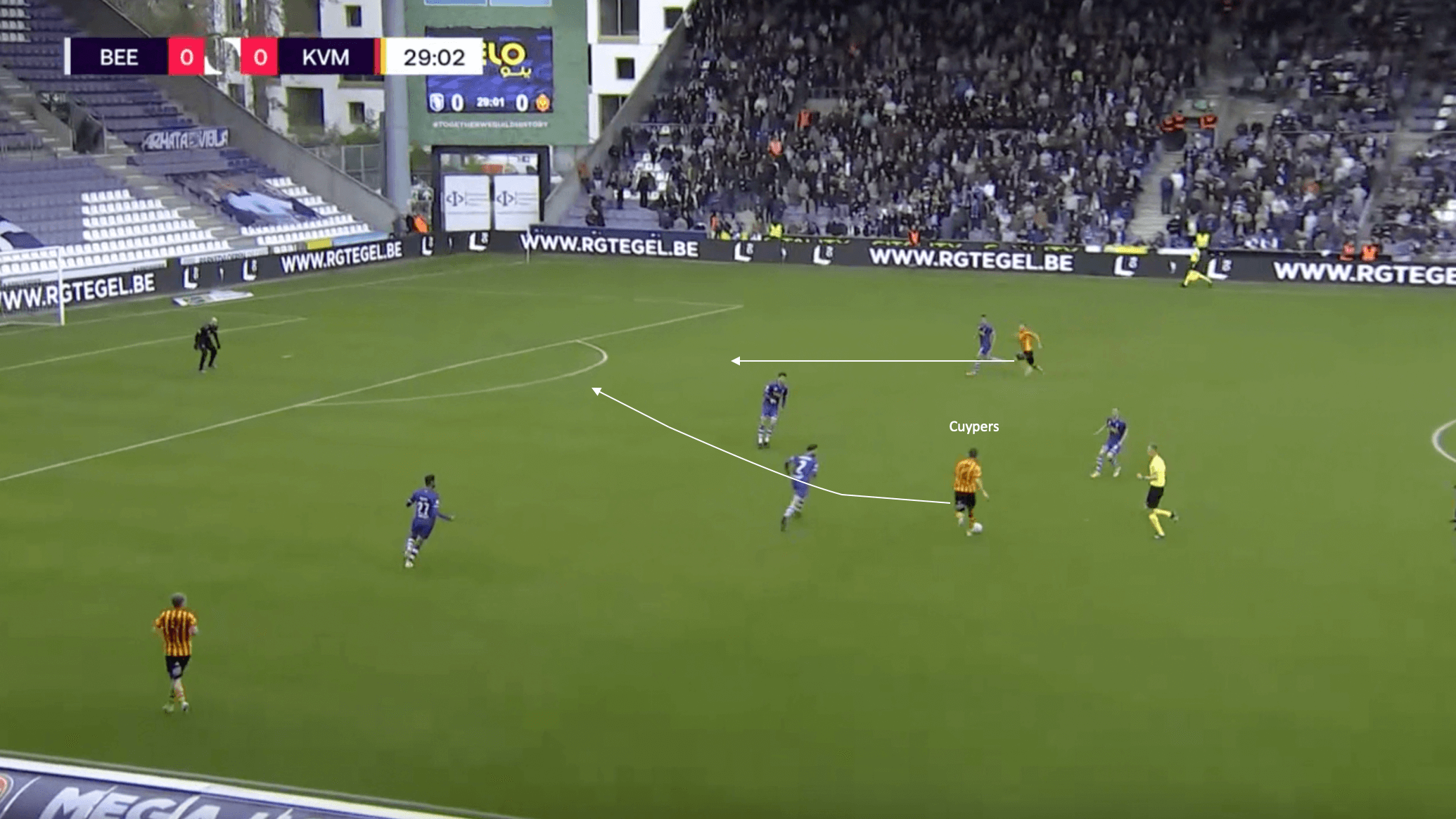 The phase of play above shows what Hugo Cuypers is capable of at his best when it comes to his link play. He receives possession in a deeper position against Beerschot before noticing the run that his teammate makes. Cuypers then plays an absolutely perfect through ball in behind the opposition’s defensive line for the forward to run onto. The ball is perfectly weighted, with the forward able to round the keeper and score. 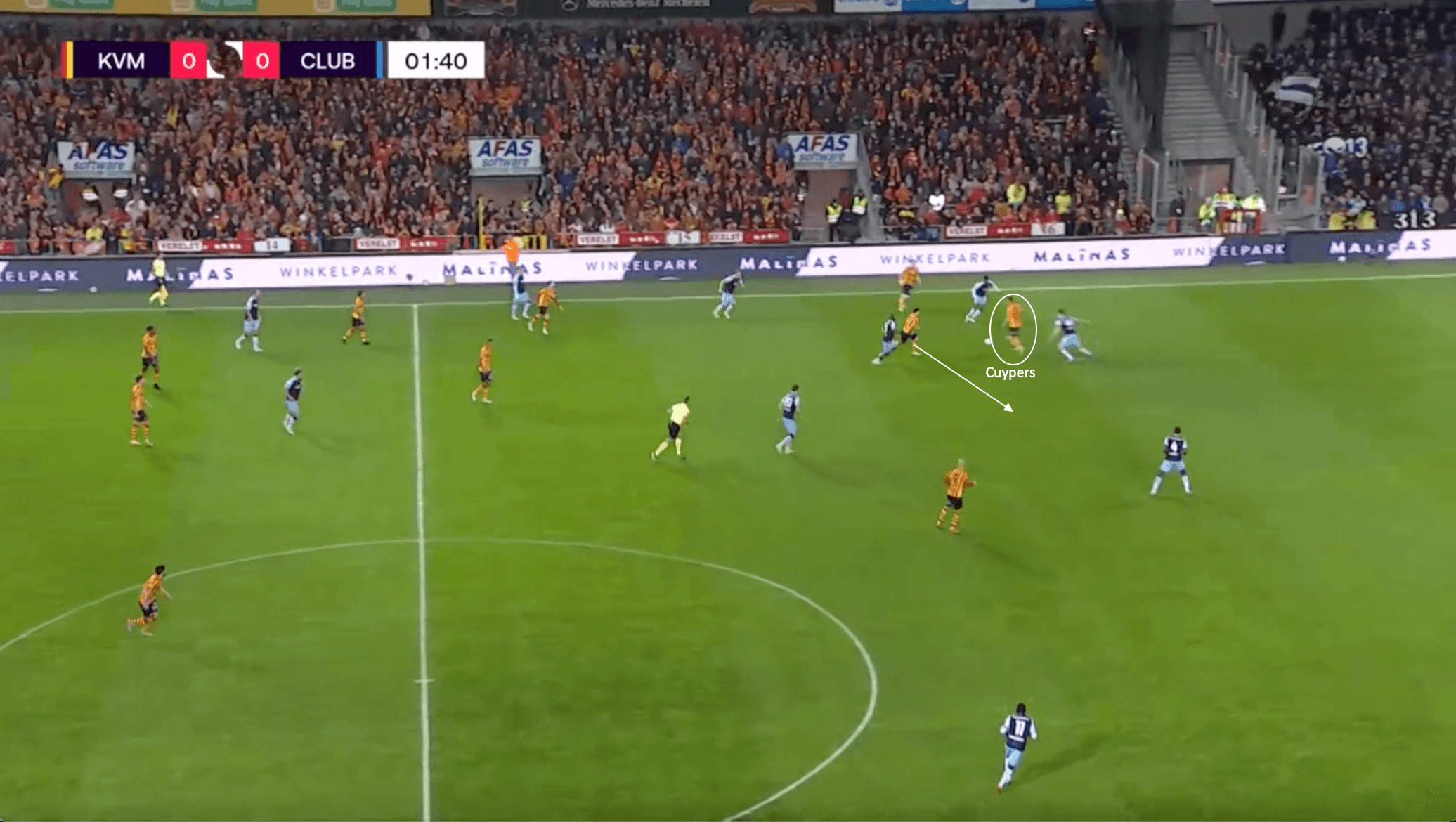 Another example of Cuypers’ ability to link play from deeper positions is shown above. Cuypers dropped into a deeper position and received the ball with his back to goal. This allows the midfielder to make an out to in run into the space vacated by Cuypers. Cuypers is then able to find the space to turn and play the ball into the run of the player, before turning and making a run in behind the opposition’s defence. The ball is played to Cuypers as a result, but he is unfortunately offside.

With the ability to play up top as a central striker, or drop into the pockets as a #10 type of player, Hugo Cuypers will be a player that Hein Vanhaezebrouck will enjoy having at his disposal. In Vanhaezebrouck’s preferred 3-4-1-2 system, Cuypers has the ability to be deployed in a few different positions due to his ability to drop deep and link play together.

While Cuypers probably will not be someone who scores 20+ goals a season for Gent, he will still certainly be a forward capable of scoring 10-15 goals a season for Vanhaezebrouck’s side. Last season with Mechelen, Cuypers managed 13 goals in the league, with all but one coming from inside the penalty box. 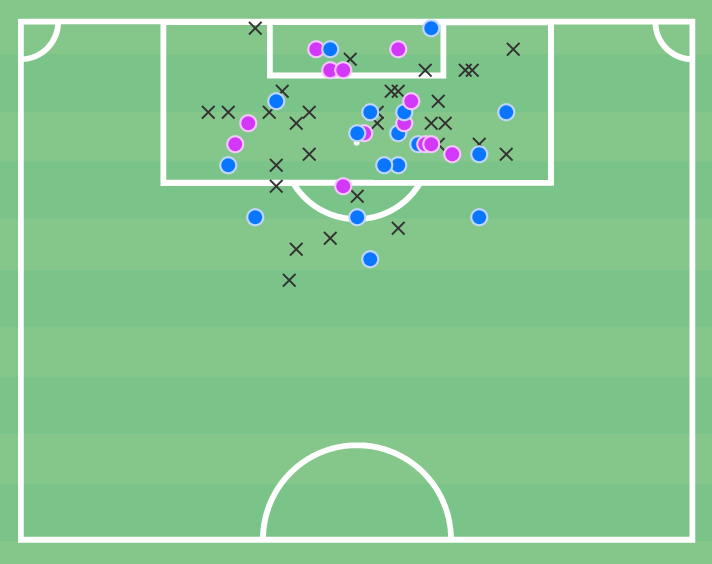 As the shot map above shows, the vast majority of shots that Hugo Cuypers attempted last season were from inside the penalty box, with them occurring all around the box as opposed to just centrally. This section will show a few examples of the positions that Cuypers takes up inside the penalty box. 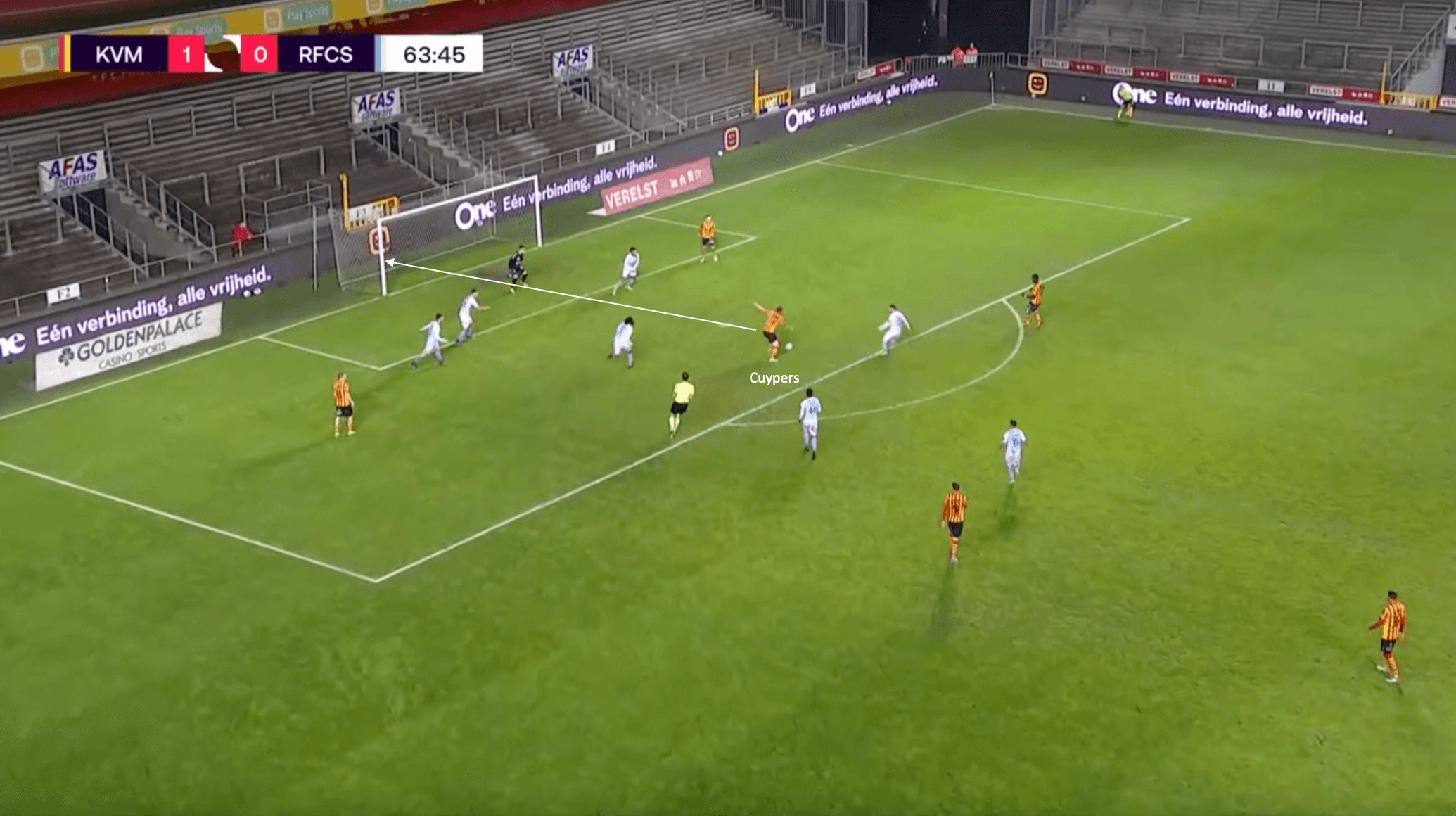 The image above portrays the types of spaces that Cuypers is able to drift into which lead to goal-scoring chances. Preceding this shot, and subsequent goal, from Cuypers, Mechelen were engaging in an attacking sequence. After Cuypers sent the ball wide, he drifted centrally towards the penalty spot. None of the opposition defenders picked him up, which allowed the ball to be played back to him. Cuypers was then able to turn to get the ball onto his stronger right foot before firing past the goalkeeper while unbalanced. These types of positions are where Gent fans should expect to see their new signing roam into, with goals hopefully resulting. 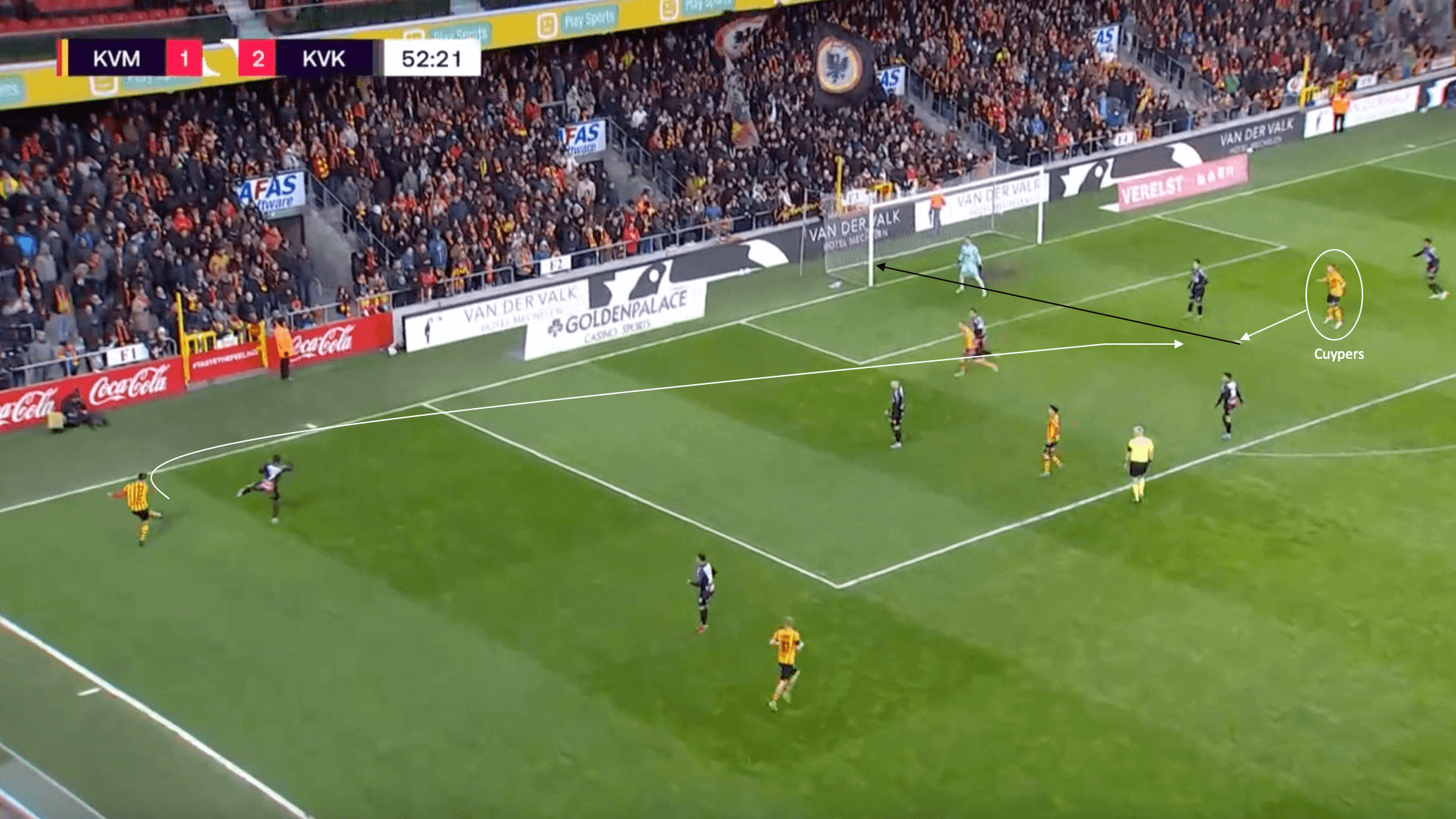 The image above once again shows a goal that Cuypers scored last season for Mechelen. As the cross is played in from the near touchline, Cuypers is able to drift away from his marker and onto the penalty spot. As the ball reaches him, he is able to shoot first time on the half volley, firing the ball past the goalkeeper at his near post. With the amount of power that Cuypers had on his shot, it was impossible for the goalkeeper to save.

Gent already have two competent goal-scoring forwards at the club in both Laurent Depoitre and Tarik Tissoudali, and with Hugo Cuypers, they are adding another.

This tactics and analysis piece has shown the strengths that Hugo Cuypers possesses, along with the type of forward that Gent are getting. Though Cuypers did not move to a bigger European club, like Ajax or Borussia Dortmund, a move to Gent is a worthy step up for the 25-year-old Belgian. With Gent winning the Belgian Cup last season, they will be automatically put into the group stages of the UEFA Europa League, where Hugo Cuypers will be able to prove himself and his abilities on the European stage.

In the last few years, there has been a resurgence of young talent in the Poland national team setup. One […] 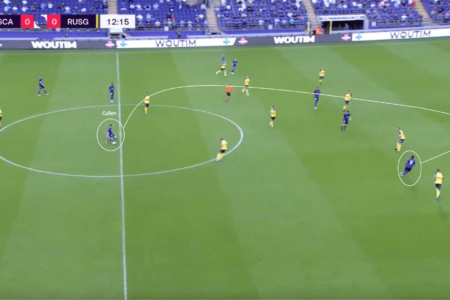 Josh Cullen’s time at West Ham United was a long, but not so memorable one. The Republic of Ireland international […]

After nearly three seasons in charge of his boyhood club, former Manchester City defender Vincent Kompany and Anderlecht decided to […]