Dundalk secured an impressive win over league leaders Shamrock Rovers last Friday, narrowing the gap at the top of the League of Ireland Premier Division.

The 1-0 win takes Dundalk to within five points of Shamrock with a game in hand as the 2022 league campaign moves past the halfway point.

One of the keys to the Lilywhites’ impressive season so far has been the form of Scottish winger Steven Bradley, on loan from Hibernian.

Signed by Hibs in 2019 following the expiry of his youth contract at Queen’s Park, 20-year-old Bradley is enjoying a fine loan spell at Oriel Park following a productive loan with Ayr United in the Scottish Championship in the first part of the 2021/22 season.

Bradley, who also spent time in the academy at Rangers in his youth career, started his latest loan off in sensational form scoring four goals in his first three games to pick up the season’s first league Player of the Month award.

Playing in a right-wing/attacking midfield position in Dundalk’s favoured 4-2-3-1 or wide right in their 4-1-4-1 on occasions, Bradley has racked up 1,174 league minutes at the time of writing.

In this data analysis, we will look at Bradley’s numbers from his spell in Ireland so far in detail, using statistics to assess whether he could be ready to make an impact on the first team at Hibs soon.

We’ll start with several scatter graphs to give an initial picture of Bradley’s performance in the League of Ireland so far this season. We will then use a percentile rank pizza chart to assess Bradley’s data in more depth.

The dataset used for both the initial scatter graphs and then the pizza chart includes players who have played a minimum of 700 minutes, predominantly as a wide midfielder or a winger, in this season’s League of Ireland. All the data for this analysis is retrieved from Wyscout.

Tableau is used to create the scatter graphs, with Python used to convert the per 90 numbers into percentile ranks for the pizza chart. 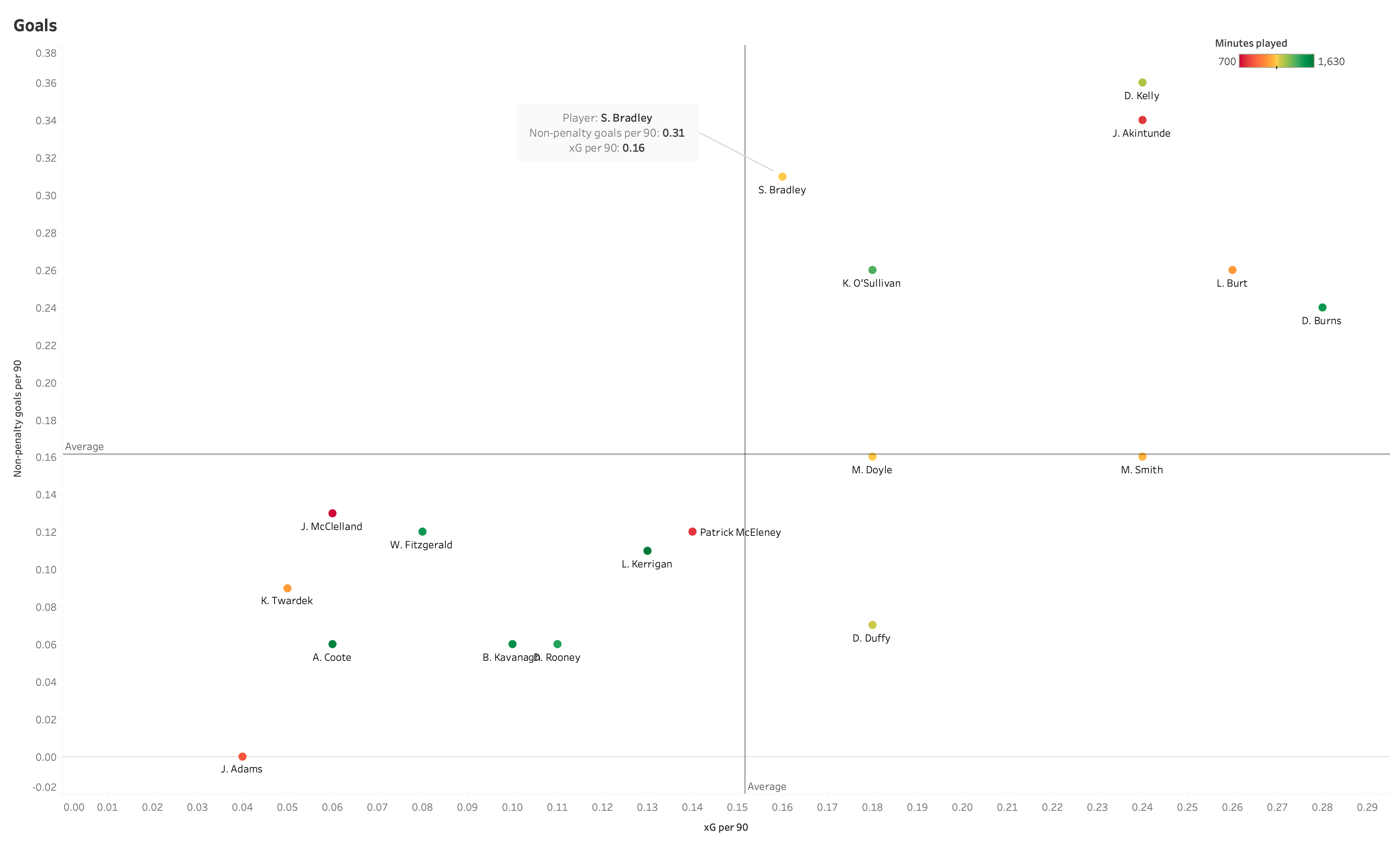 First, we’ll look at a scatter graph for goals. As mentioned, Bradley started his loan spell brilliantly in terms of goals, bagging four in his first three. He hasn’t been able to add to his tally since then though and has a current non-penalty goal per 90 number of 0.31. Overall, he has overperformed on his xG per 90, which is 0.16 per 90. 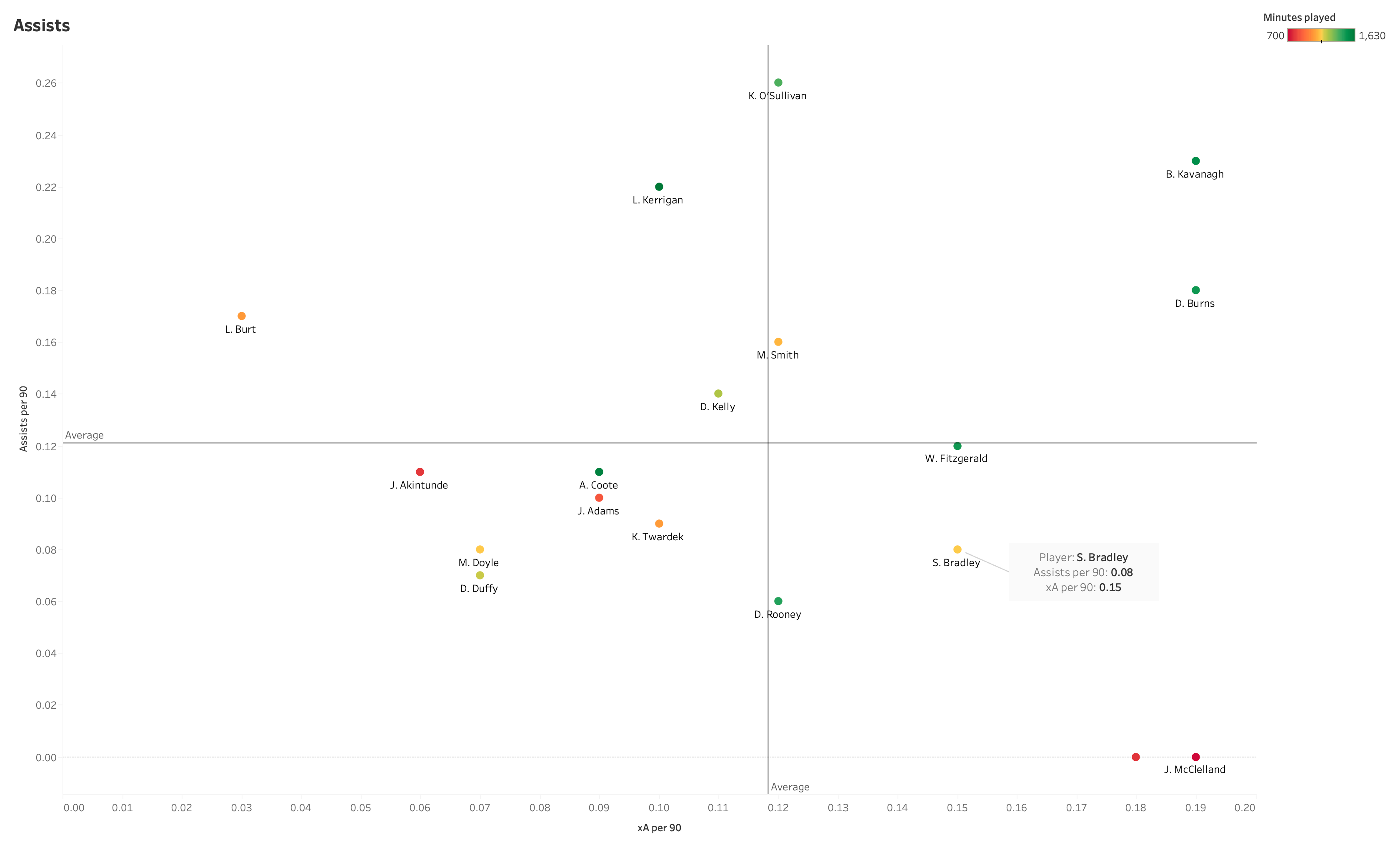 Here we can see how Bradley has performed in terms of his assists. According to Wyscout, Bradley has registered one assist so far this season, although other sources have given an extra assist. This gives him a per 90 assist number of 0.08. However, he may well have had a few more assists as his xA number is higher at 0.15 per 90. 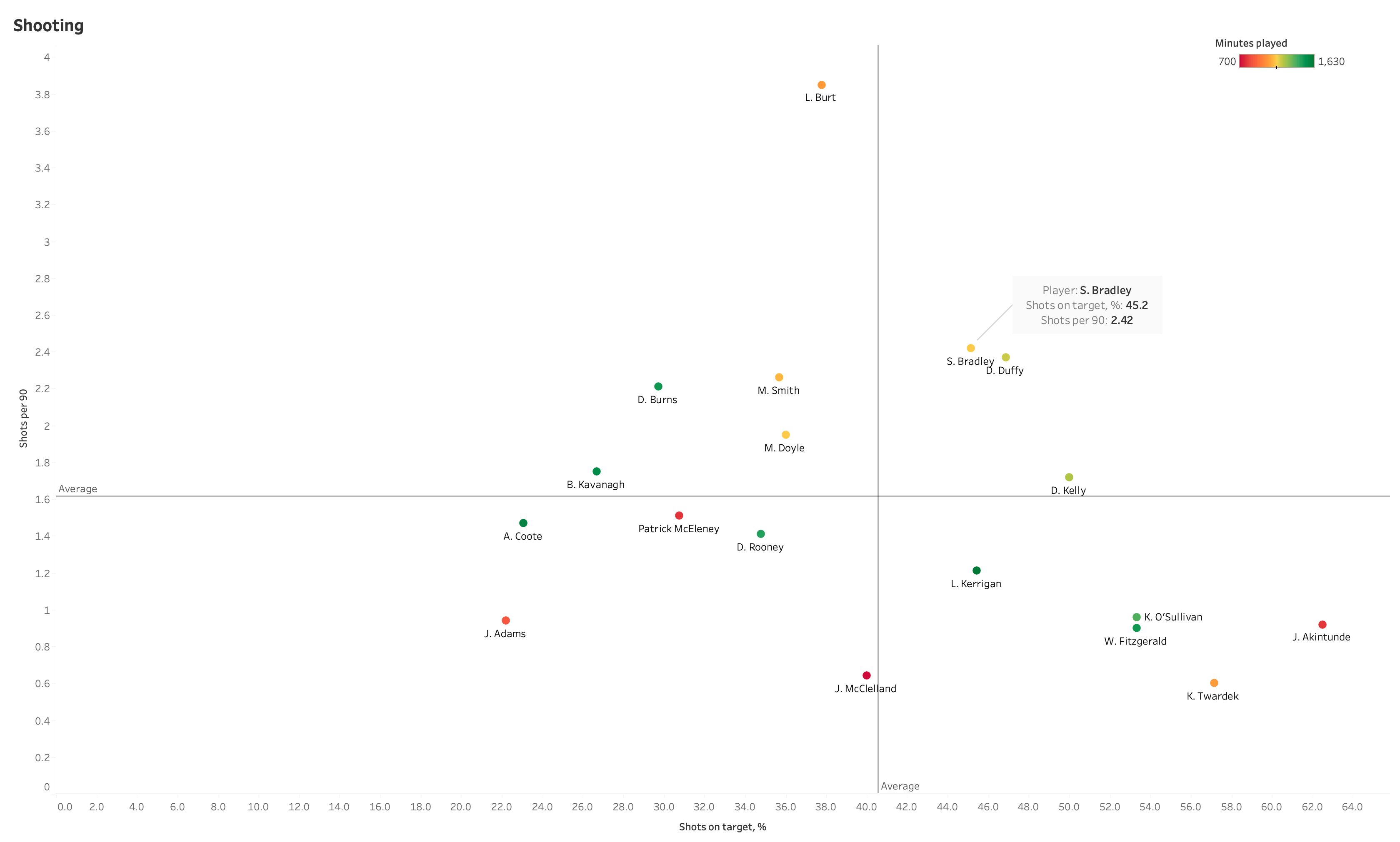 Looking at his shooting numbers in the next scatter we can see Bradley has not been afraid to pull the trigger, with an average of 2.42 shots per 90. His on-target stat is not among the best in the league for players in his position but his percentage (45.2%) is still above average. 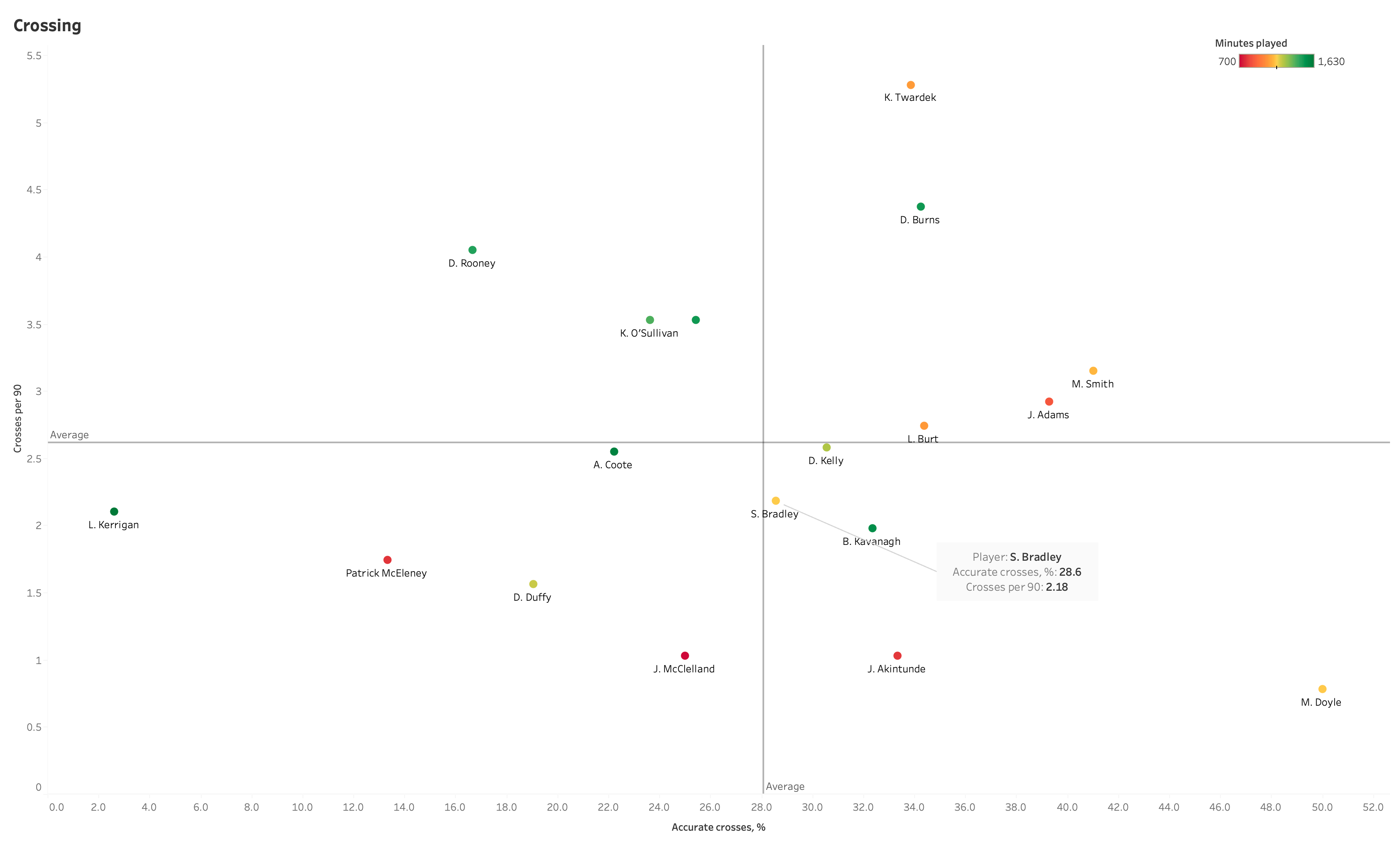 The next scatter shows his crossing performance so far this season. Here we can see Bradley has not been amongst the most frequent crossers with a below-average number (2.18) compared to his league counterparts. His accuracy percentage when he has crossed has been just above average at 28.6%. 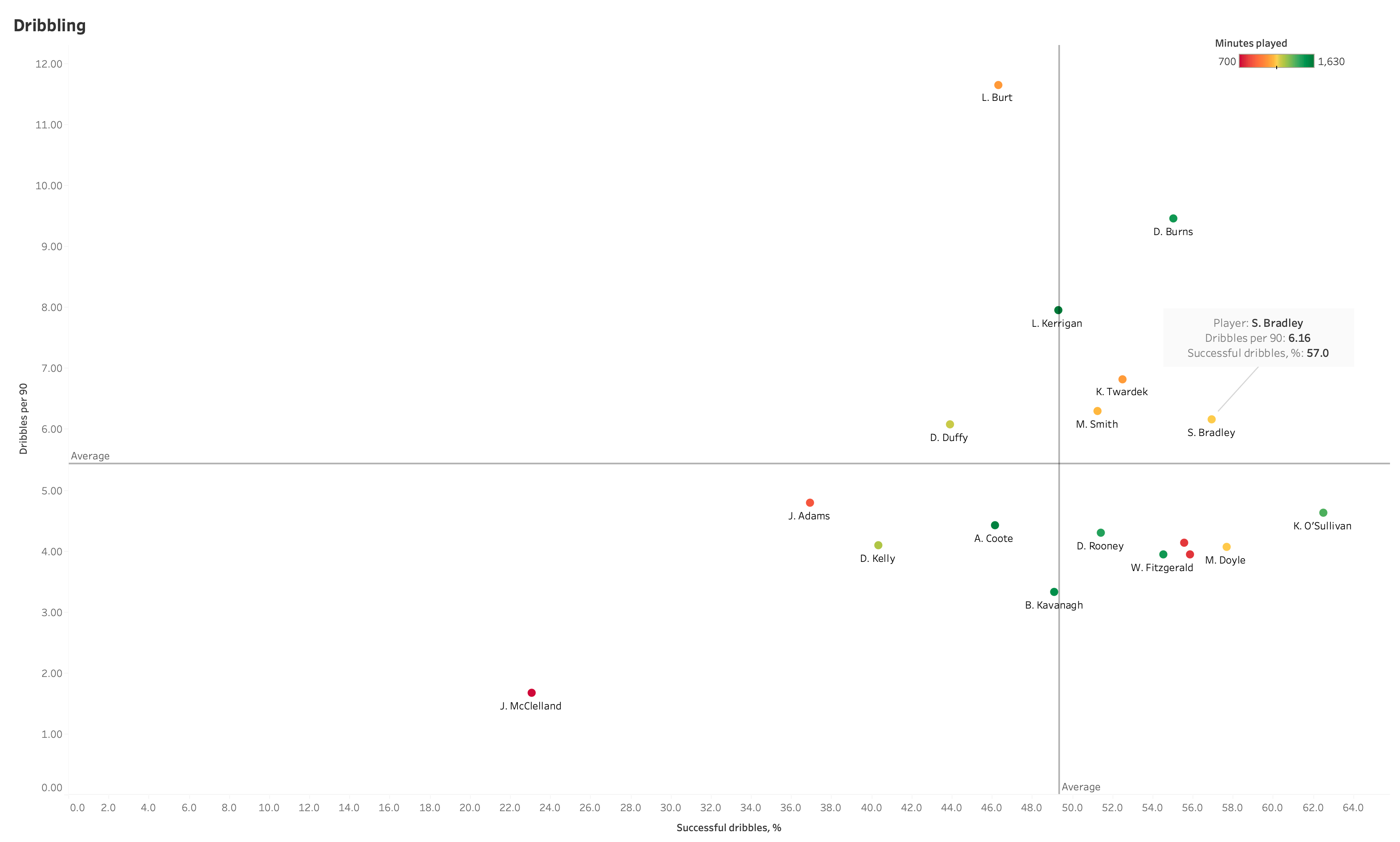 For dribbles, Bradley shows up in the upper right quarter of the scatter with an above-average score for both. He has attempted 6.16 dribbles per 90 so far this season with a 57.0% success rate. 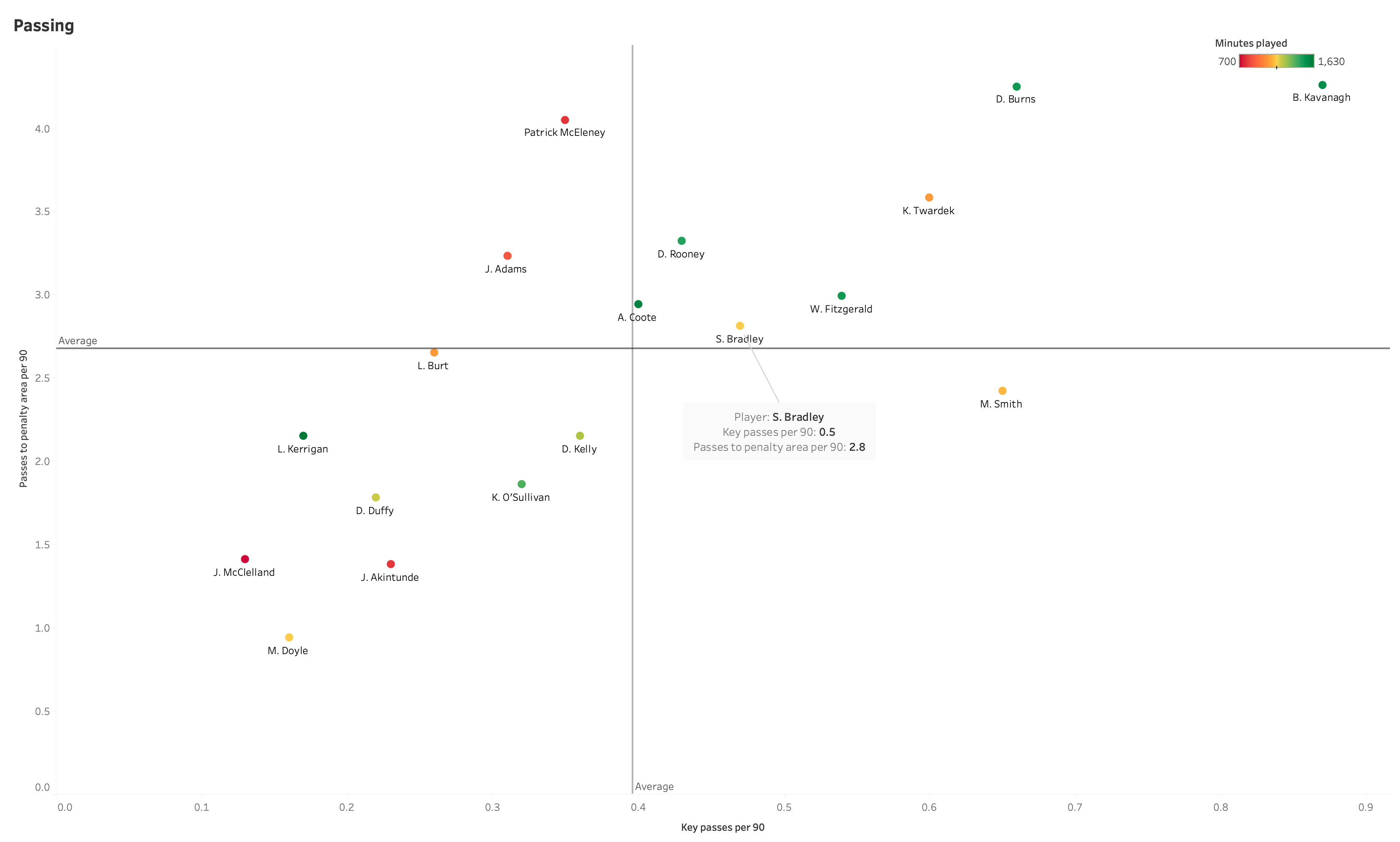 To assess how Bradley has performed on the ball we can look at two specific passing metrics to show us how dangerous he has been in possession. The two we have chosen to look at here are key passes, passes that immediately create a clear goal-scoring opportunity for a teammate, and passes to the penalty area.

Bradley has above-average numbers per 90 for both passes compared to his league counterparts with 0.5 key passes per 90 and 2.8 passes to the penalty area per 90. 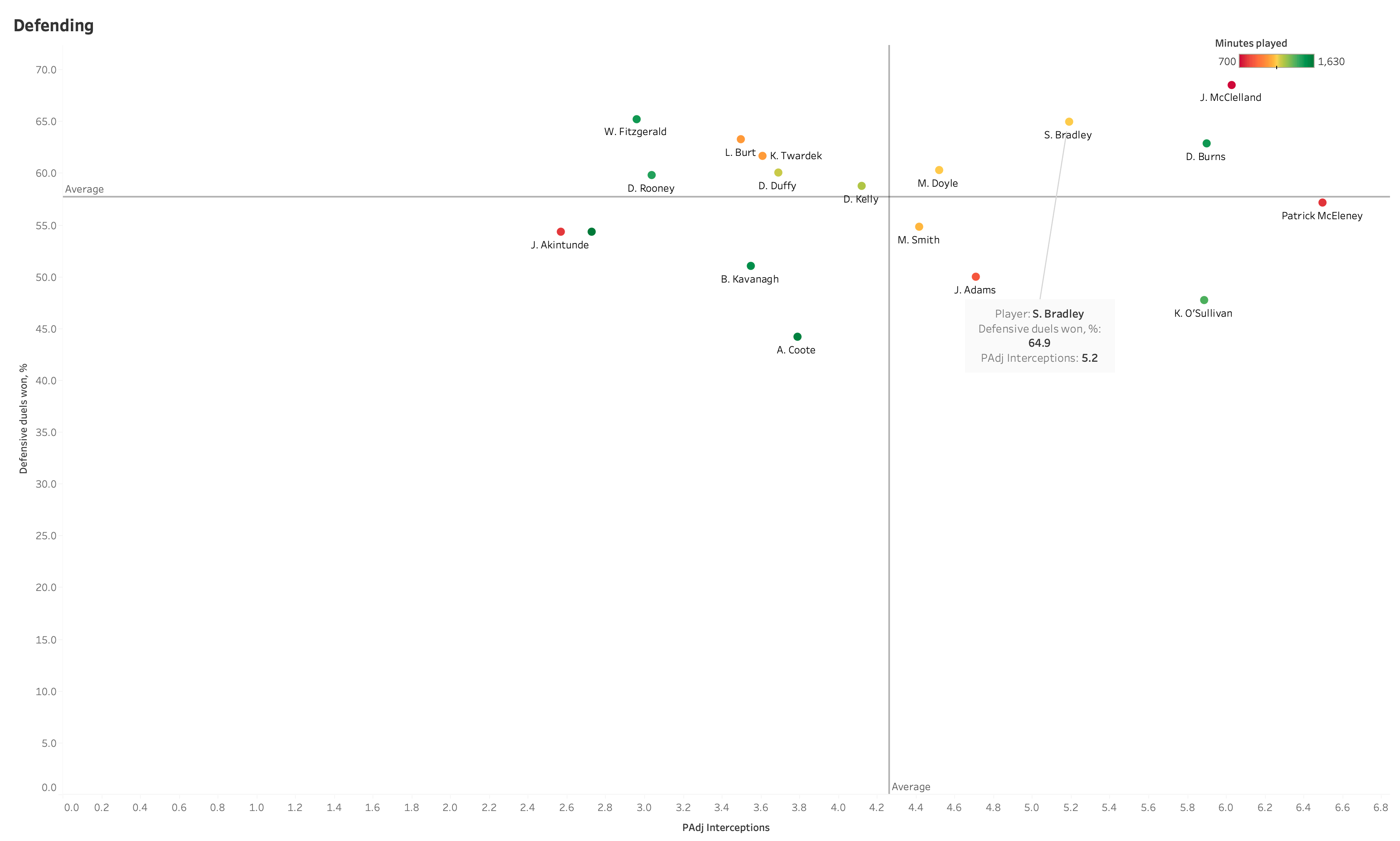 The final scatter we will look at is comparing defensive duels won, % and PAdj interceptions. This will give an idea of how hard Bradley is working for the team when they are out of possession.

Bradley also has above-average numbers for a wide midfielder/winger in the league so far this season, winning 64.9% of his defensive duels and completing an average of 5.2 PAdj interceptions per 90. 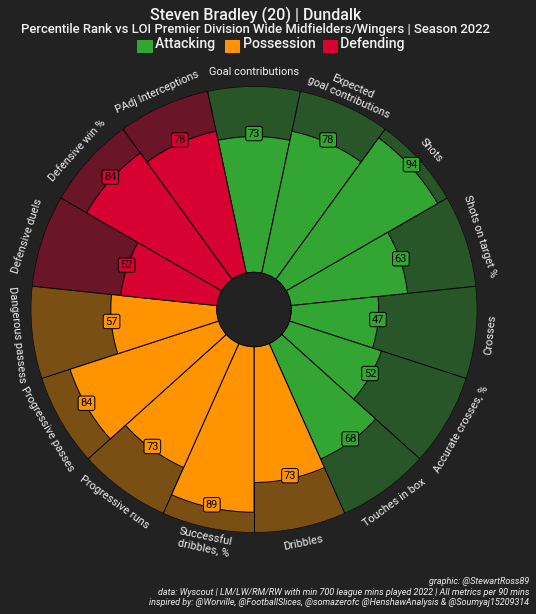 Looking at Bradley’s percentile ranks in the pizza chart we can see an overall picture of his performance so far this season.

We can also see his high volume of shots come through with a reasonable rank for his on-target percentage. As we have also seen, he is around average for crossing, both for volume and accuracy. He is also slightly more active in the box than his counterparts with an above-average score for touches in the box.

On possession, we may expect these to be relatively high as Dundalk are one of the more dominant teams in the league, averaging 53.6% possession per game. However, Bradley’s numbers are still impressive nonetheless, particularly progressive passes while he has produced an above-average number of dangerous passes (a combination of key passes and through passes) compared to his league counterparts.

He also ranks well for dribbles, with a very high rank for his success rate, and progressive runs which suggests he is one of the better ball carriers in the league in his area of the pitch.

Defensively, we can again see Bradley has been doing his bit going the other way. In terms of volume of defensive duels, he ranks around average for the number he is involved with but is well above average amongst his counterparts for his defensive duel win percentage. He also ranks above the 75th percentile rank for his number of PAdj interceptions.

Overall, Bradley’s percentile rank pizza chart shows a rounded wide midfielder/winger profile and suggests a player who is more dangerous coming in the field to attack the box, to either shoot or play in a teammate, more than getting wide and crossing. It also highlights, compared to his counterparts in the league anyway, that he is hard-working off the ball too.

Despite not being able to sustain his sensational early form, Bradley’s underlying numbers show he is still performing well, making a telling contribution at the top end of the park, while contributing out of possession.

Whether this current level of performance would make him part of the squad at Easter Road is difficult to tell, particularly with the current squad overhaul following the former Bristol City and Sunderland manager Lee Johnson’s appointment.

Hibs do have an option to recall Bradley early next month, but it would likely make more sense for him to continue at Dundalk until the end of the season to continue his development.

If he can continue to impress further and can find a bit more consistency then he may well play his way into Lee Johnson’s thinking by the end of the year. 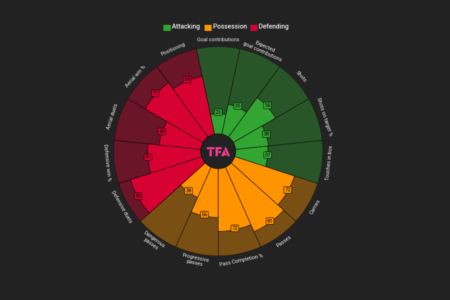 With the Scottish Premiership kicking off in just a matter of days, clubs have been busy making further additions to […] 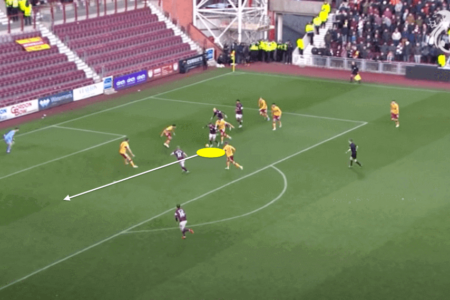 Hearts made an impressive return to the Scottish Premiership in 2021/22, finishing as the best of the rest behind Celtic […]