Japanese centre back Ko Itakura is once again being linked with a move to Ange Postecoglou’s Celtic.

A target last summer during Postecoglou’s first transfer window, Itakura is believed to be back on the Parkhead club’s radar following a successful loan spell in the Bundesliga 2 with Schalke 04.

Schalke 04 have an option to buy the defender, on loan from Manchester City, but it is reported they will be unable to afford the €5 million fee despite winning promotion back to the Bundesliga.

That has alerted Celtic once again, as well as a host of other clubs who now look set to compete for the signature of the Japanese international signed by City from Kawasaki Frontale in 2019.

In this data analysis, we will look at Itakura’s number from his spell in Germany in detail. We will focus particularly on his suitability as a ball-carrying centre back, believed to be the profile of a player Celtic are looking to recruit this summer. It will be an analysis, using statistics, to see whether Itakura would be a solid signing for the Bhoys.

We’ll start with several scatter graphs to give an initial picture of Itakura’s performance in Bundesliga 2 last season. Then we will use a percentile rank pizza chart to dig into Itakura’s data in more depth.

The dataset used for both the initial scatter graphs and then the pizza chart includes players who have played a minimum of 1,000 minutes, predominately at centre-back, in last season’s Bundesliga 2. All the data is retrieved from Wyscout.

Tableau is used to create the scatter graphs, with Python being used to convert the per 90 numbers into percentile ranks for the pizza chart.

First, we’ll look at the scatter graphs for one of the key attributes that Celtic will be prioritising when recruiting for the centre back position this summer, passing. 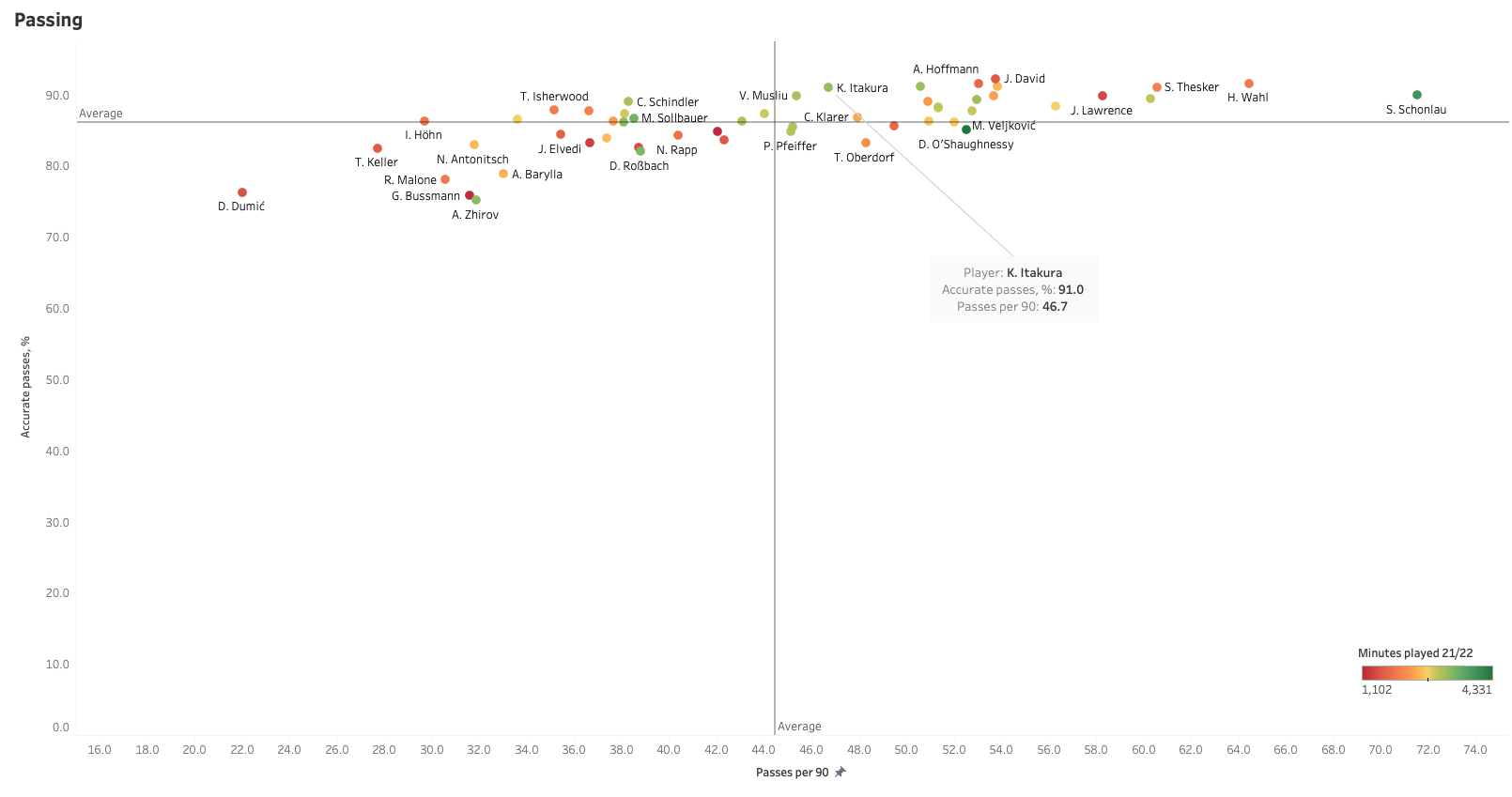 In this first scatter graph we can see passes per 90 and overall passing accuracy, %. Although this doesn’t tell us too much about Itakura’s profile at this stage, it can give an initial impression of how he performs in possession.

Itakura’s 46.7 passes per 90 were just above average for centre back in the Bundesliga 2 last season. He also had a top % for his passing accuracy with 91.0%. At first look, Itakura appears to be a player who is secure in possession.

To tell us a bit more about how he performs on the ball, we can look at some more specific passing metrics. 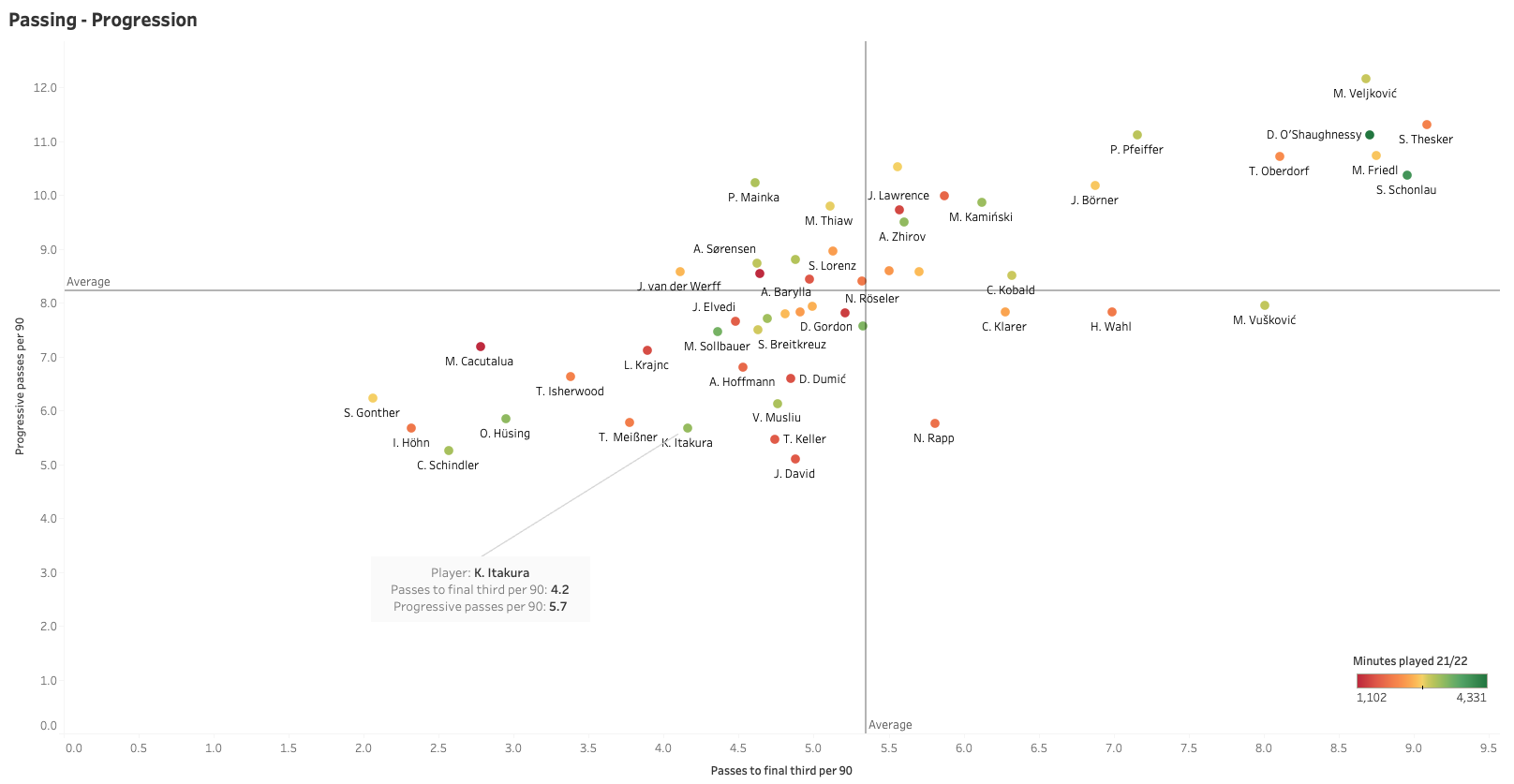 Here, we can see Itakura attempted a below-average number of progressive passes per 90, 5.7, and passes to the final third, 4.2, last season, which is maybe a bit lower than would be expected.

The attribute we will look at next is ball-carrying. For Celtic, the ability to carry the ball out from the back is key, both domestically to disrupt low blocks by carrying into attacking zones but also in Europe competition where they are likely to face higher, better organised pressing. 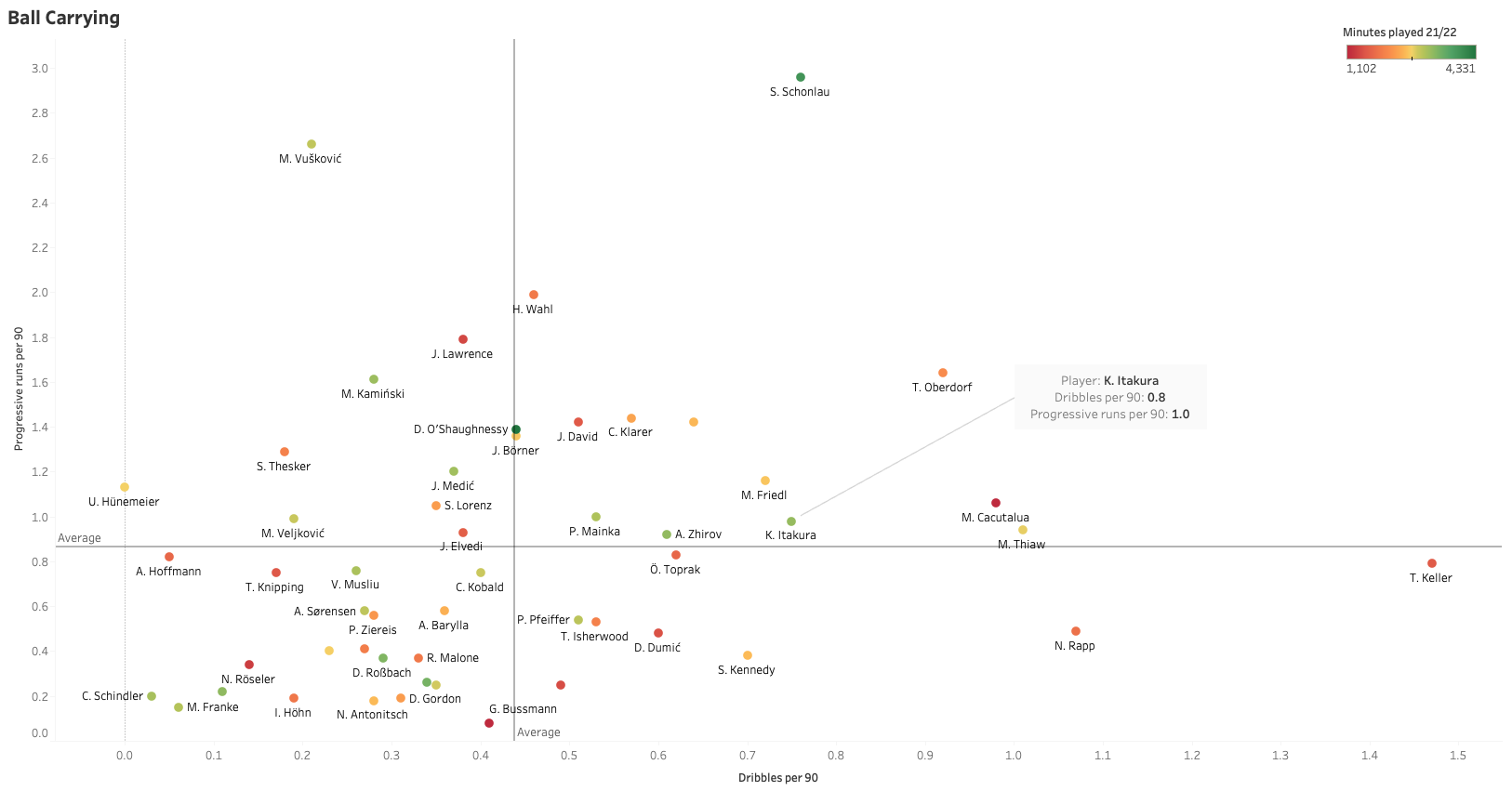 Itakura scored above average for a centre back in Bundesliga 2 last season on both metrics here, with 1 progressive run per 90 and 0.8 dribbles per 90. In comparison to Celtic’s two first-choice centre backs last season, Itakura’s dribbles attempted per 90 is double that of Cameron Carter-Vickers (0.4) and Carl Starfelt (0.31).

With the physical nature of the Scottish Premiership, Itakura will also need to be robust when out of possession.

To get a picture of how he performed defensively last season, we will look at defensive and aerial duels, and his success in each, as well as his positioning in shots blocked and PAdj interceptions. 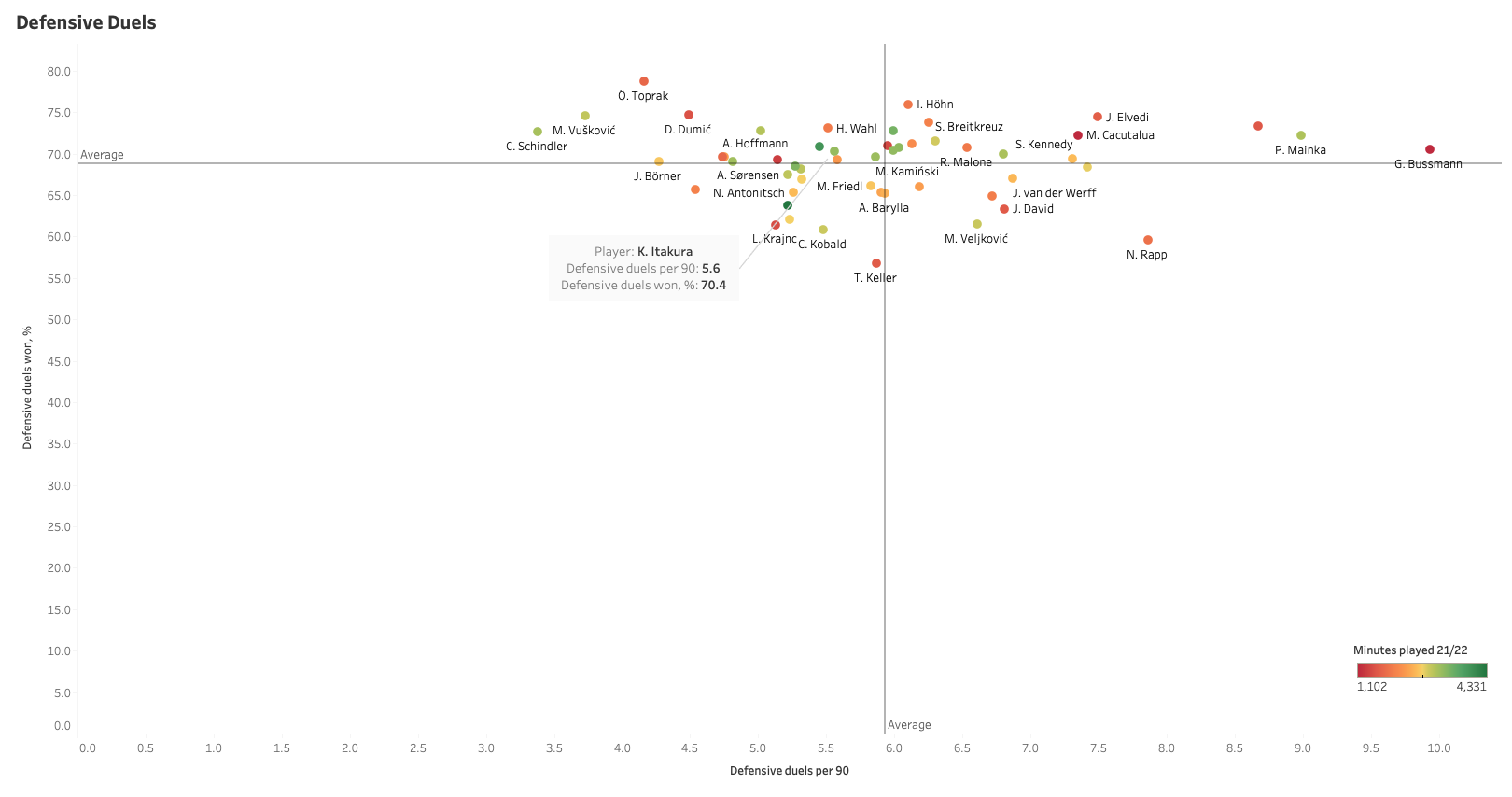 For defensive duels, Itakura was involved in just under an average number per 90, 5.6. His success rate was just above average at 70.4%. 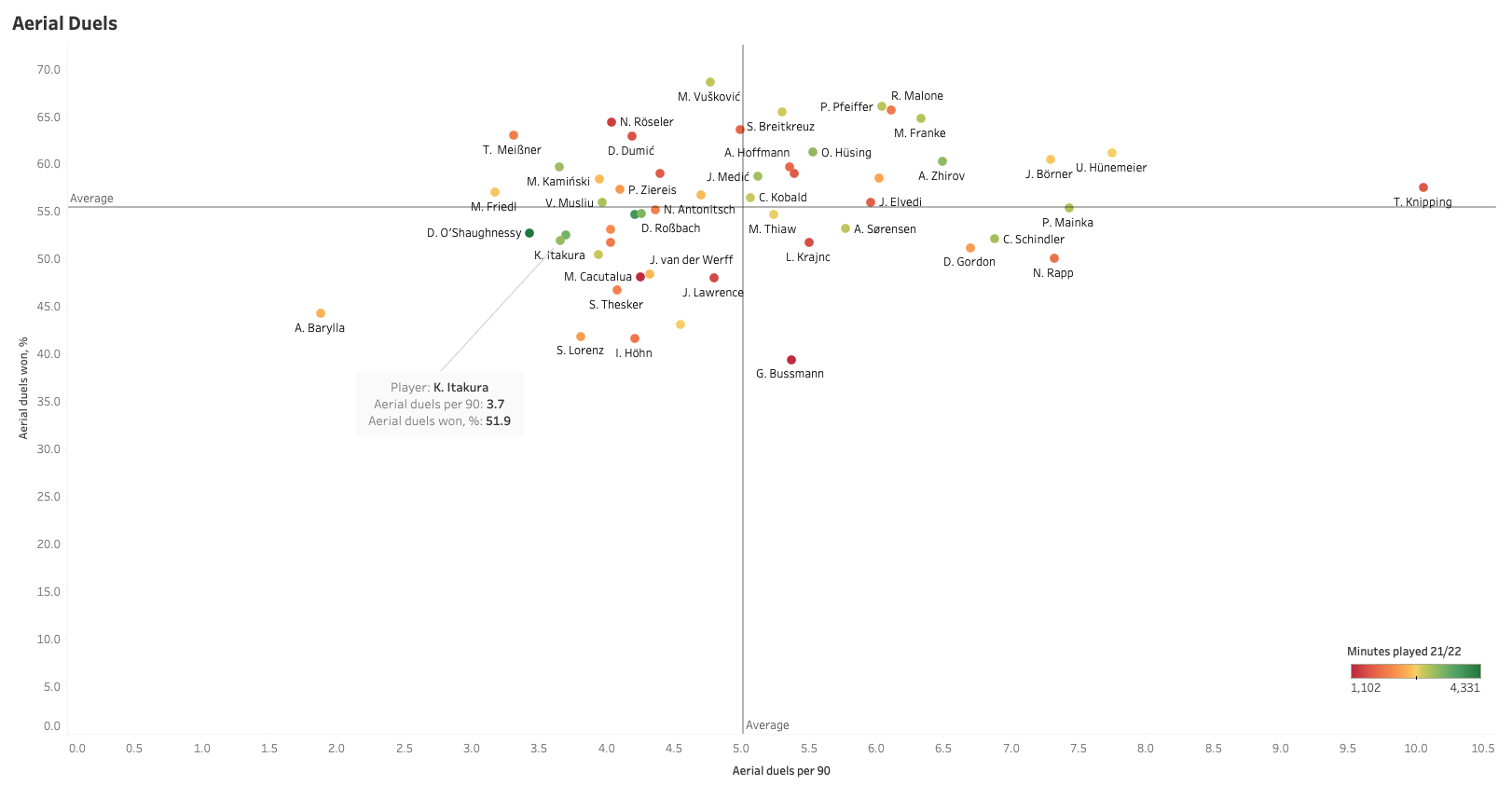 For aerial duels, Itakura was involved in a lower than average per 90, 3.7 while his percentage win was below average at 51.9% 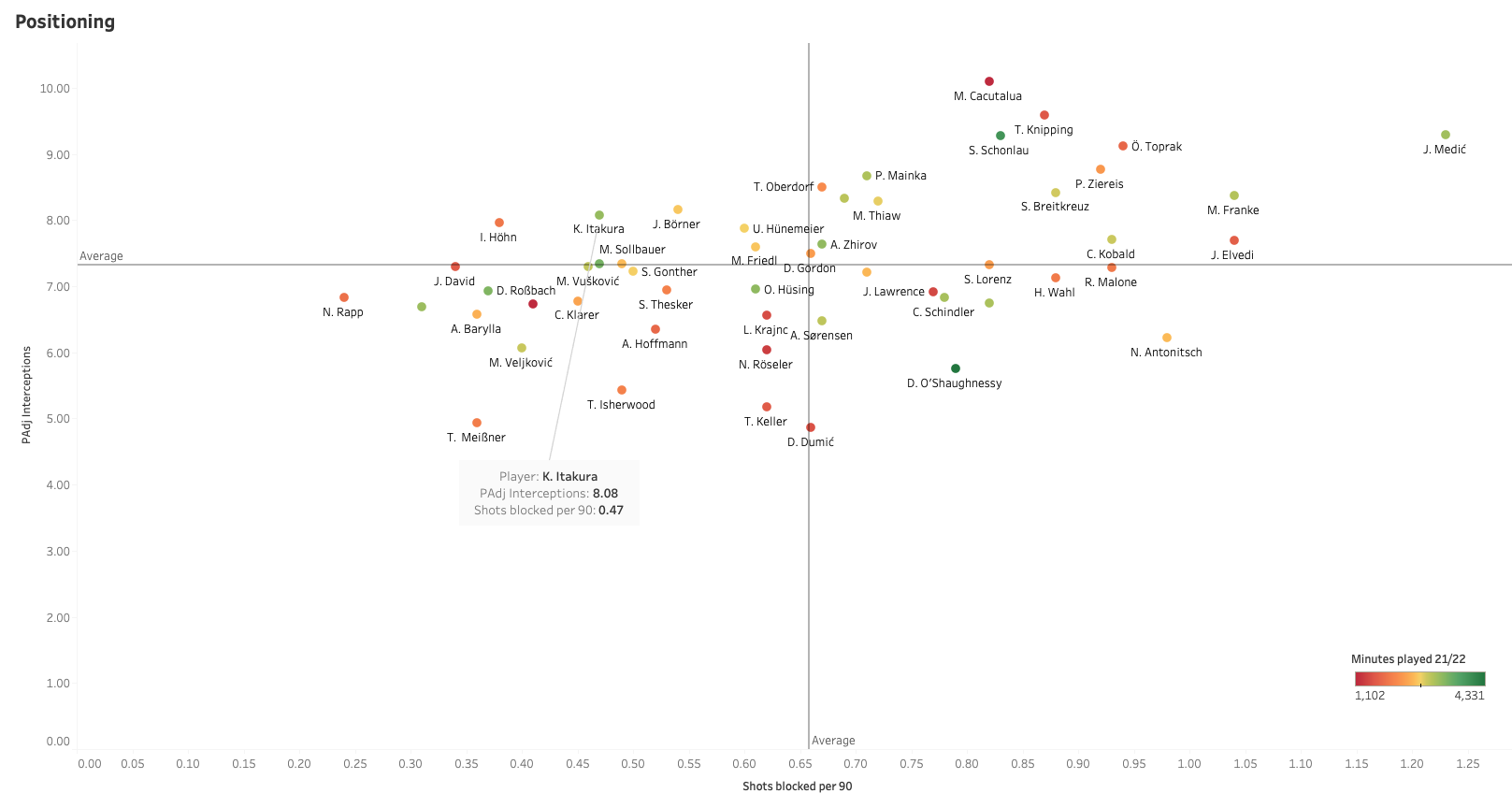 Itakura made 8.08 PAdj Interceptions per 90, above average for centre back in the Bundesliga 2 last season. On shots blocked, he made a below-average number per 90, 0.47. 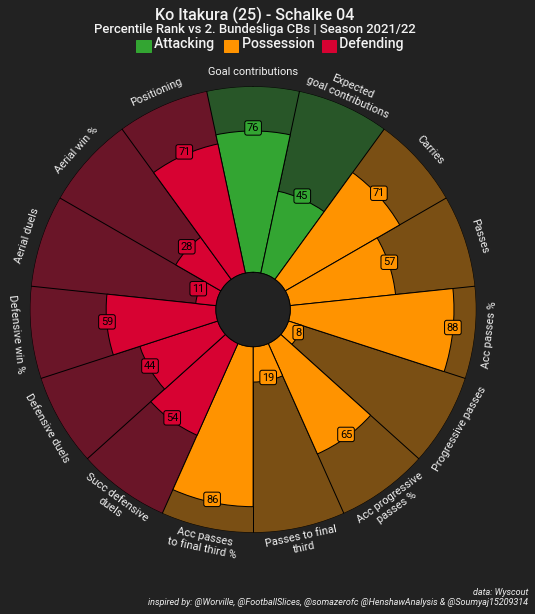 Looking at Itakura’s percentile ranks in the pizza chart we can dig a bit deeper into some of the traits we have seen come through in the scatters.

Considering the possession section first, we again see him score highly for carries, a combination of the progressive runs and dribbles metrics. Again, we see his low scores for the number of attempted progressive passes and passes to the final third.

Interestingly though, we see his percentile rank for his accuracy scores for both is above average. Particularly his passes to the final third accuracy % score, which is above the 75th percentile mark.

Coupled with his impressive accuracy percentage for all passes, we can see that when Itakura does attempt this kind of progressive, line breaking pass he is often accurate.

His lower numbers for the volume of these passes could be accounted for when Schalke 04’s style from last season is considered. Despite winning the title, Schalke 04 were not a side that looked to dominate the ball, with five teams in the league having a higher average possession than their 52.4% per game. They also only totalled a few more passes per 90, 379.25, than the league average, 375.19.

It is very likely if Itakura was to make the move to Celtic he would be on the ball more, certainly domestically, than he was at Schalke 04.

Looking again at the chart, we can see around average scores for defensive metrics, except his positioning which is just under the 75th percentile mark. He is not involved in a huge number of duels, most likely due to his good positioning which will mean he does not have to engage as often. When he does have to engage, he is above average for % of successful defensive duels but has a low score for % of successful aerial duels.

That aerial duel success rate could be a concern with the physical nature of most strikers in the Scottish Premiership, but he would likely be paired with Carl Starfelt, or Cameron Carter-Vickers if he makes his loan move permanent, both of whom are more dominant in the air. Starfelt won 59.8% of his aerial duels in last season’s Scottish Premiership, while Carter-Vickers won an impressive 66.2% of his.

Finally, on attacking, we can see Itakura offered a decent goal threat for Schalke 04 last season. Although he did overperform on his expected goal contributions, he still ranks around average for this metric with his 4 goals throughout the campaign giving him a more impressive rank for goal contributions.

Itakura’s numbers may not have stood out at first glance, certainly in terms of the ball-playing profile Celtic are looking for. However, by digging deeper into his data, and adding in the context of Schalke 04’s playing style last season, we can see exactly why Celtic are targeting him.

As well as a progressive centre back option, Itakura will also offer his next club flexibility, having played in central defensive midfield on a few occasions for Schalke 04 last season.

That flexibility to move into the ‘6’ role will appeal to Celtic in particular as it would give another option in a position where they have been heavily reliant on their captain Callum McGregor. Having a more defensive, but still more than capable on the ball alternative could allow McGregor to move forward into one of the two free ‘8’ roles in Postecoglou’s midfield.

With a final decision yet to be made on whether Cameron Carter-Vickers returns, as well as uncertainty regarding other centre backs, particularly Christopher Jullien, we know Celtic will certainly bring in at least one, if not two, for this position.

If one of those brought in does end up being Ko Itakura, he would represent another smart piece of recruitment by Postecoglou’s side.