Data Analysis: Using data to identify a ball-playing centre back in the J1 League

In this data analysis piece, we will look to identify ball-playing centre backs in the J1 League who may be a target for Ange Postecoglou’s Celtic.

With a league and league cup double in the bag, and a place in the group stages of next season’s Champions League confirmed, Celtic’s full attention will now be turning to this summer’s transfer window.

Although there will not be a huge turnover like last summer, Celtic have several positions that they will look to add to ahead of the next season’s challenges with centre back is believed to be one of those.

However, even if Carter-Vickers’ loan deal is made permanent this summer, there is uncertainty regarding the future of third and fourth choice picks Stephen Welsh and Christopher Jullien.

More importantly, there is the question of all four’s suitability to Postecoglou’s system which looks to dominate the ball at a high tempo, taking minimal touches and keeping it moving at pace.

As the Celtic manager put it himself in a mic’d up video in the early weeks, “Ball speed is very important for us, ball speed is number one. Even when we are keeping possession, I don’t want the ball to move slowly. When we pass it, we pass it with purpose.”

Carter-Vickers and Starfelt have both adapted well in general, and both are more than comfortable defensively, but neither can be described as natural ball-playing centre backs though.

Therefore, it is believed that Celtic will look to target a centre back who can be more progressive in this position.

Postecoglou has already had great success recruiting from J1 League, a league he previously won with Yokohama F Marinos. Kyogo Furuhashi, Daizen Maeda and Reo Hatate all played a key role in Celtic’s charge towards the Scottish Premiership title this season.

Yosuke Ideguchi has also been recruited from the J1 League during Postecoglou’s debut season, but injury problems have hampered the early stages of his career in Glasgow’s east end.

With this recent success in this market, the club’s recruitment team will likely still have a close eye on the league for all positions.

Therefore, we will use data to identify centre backs, capable of breaking lines, through their passing or carries, but who are also still defensively sound, in the J1 League who may be a target for Celtic.

We’ll start with some basic scatter graphs to narrow down our search. Once we’ve shortlisted a few players we can then use percentile rank pizza charts which will allow us to dig into their data in more depth.

The dataset used for both the initial scatter graphs, and then the pizza charts, include players who have played a minimum of 500 minutes, predominately at centre-back, in this season’s J1 League. All the data is retrieved from Wyscout.

Tableau is used to create the scatter graphs with Python then used to convert the per 90 numbers into percentile ranks for the pizza charts. 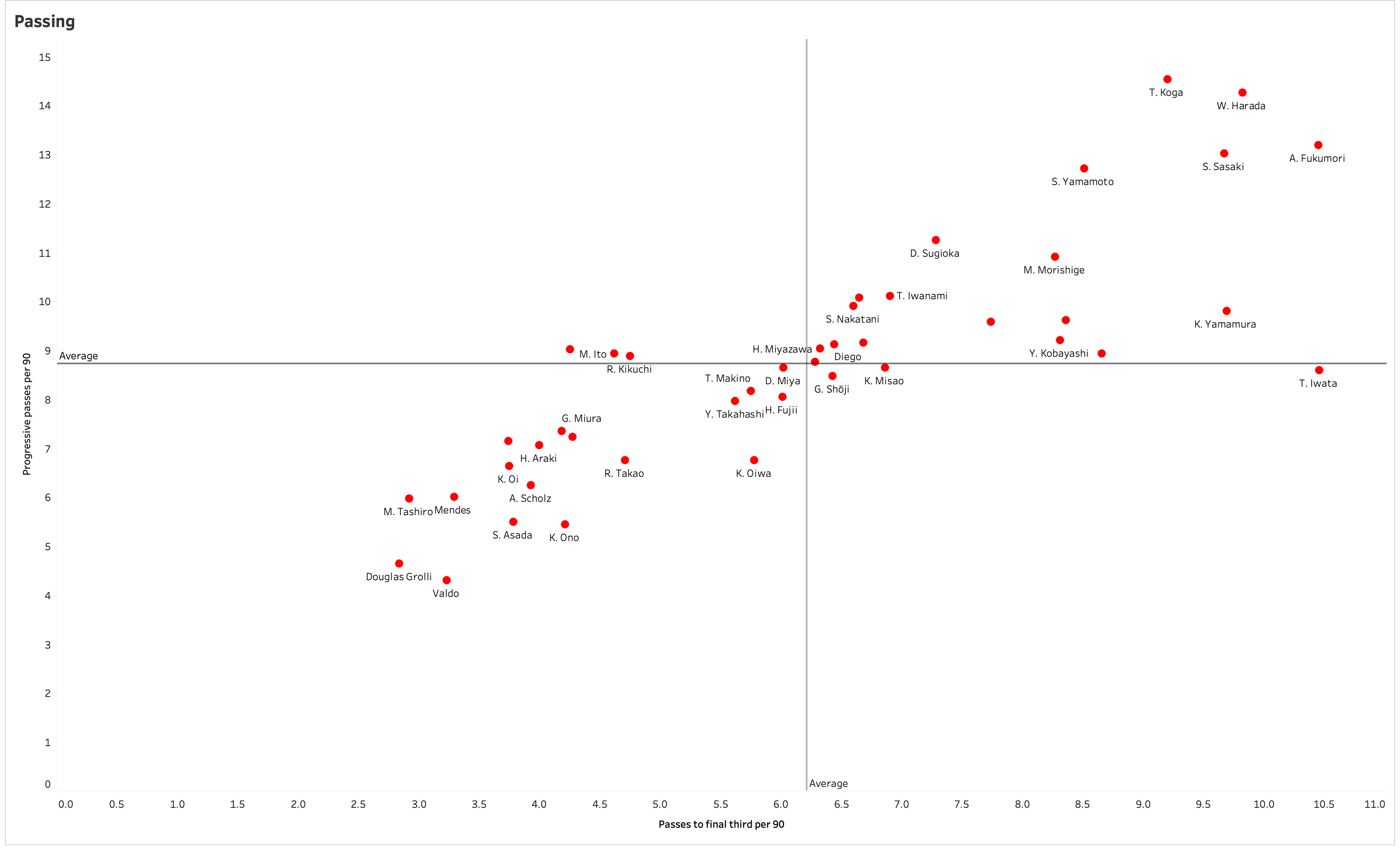 First up, we’ll look at a scatter graph for one of the key attributes we are looking for, passing.

General passing stats won’t tell us too much about their profile. We are looking for players who can progress the ball up the pitch through their passing, and, given Celtic’s ball and territory dominance in most domestic games, into the attacking third as well. 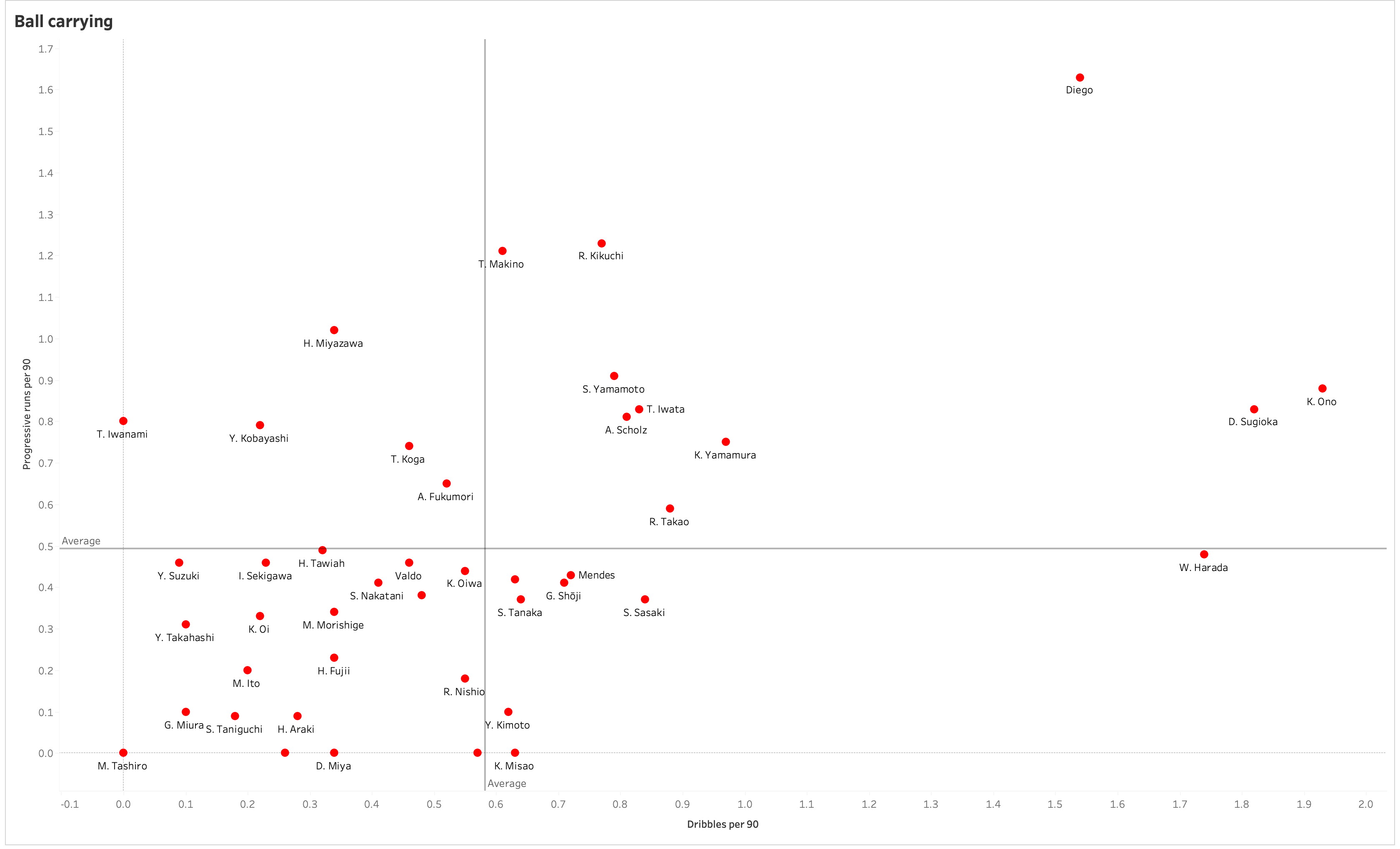 The next ability we are looking for is ball-carrying. The ability to carry the ball could be a great attribute for a Celtic centre back, both domestically to disrupt low blocks by carrying into attacking zones beyond the midfield and in Europe where they are likely to face higher, better organised pressing.

Given the physical nature of the Scottish Premiership, players would also need to score well on these metrics to be considered. We’ll look at both defensive and aerial duels, and the player’s success in each, as well as general defending in shots blocked and PAdj interceptions. 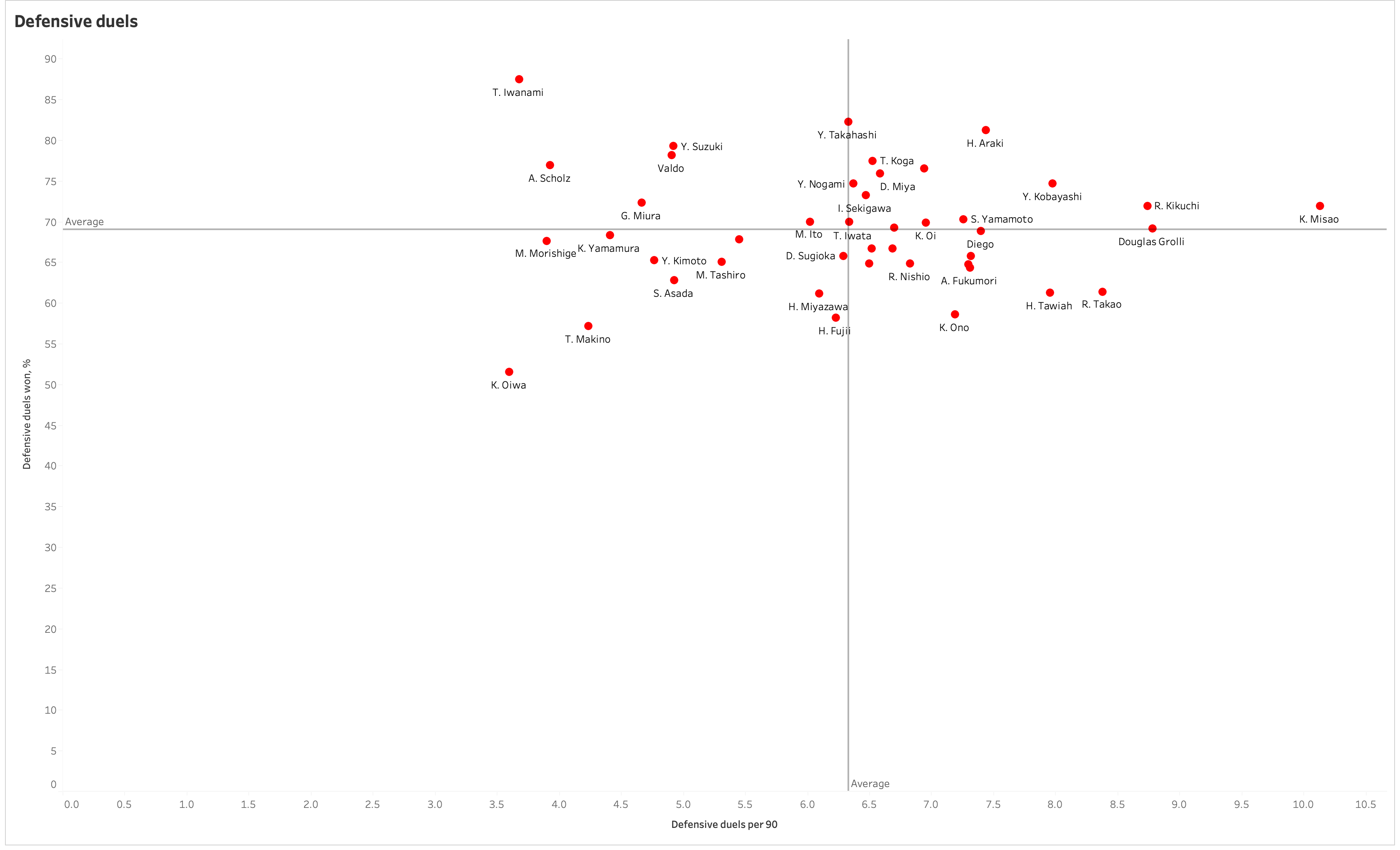 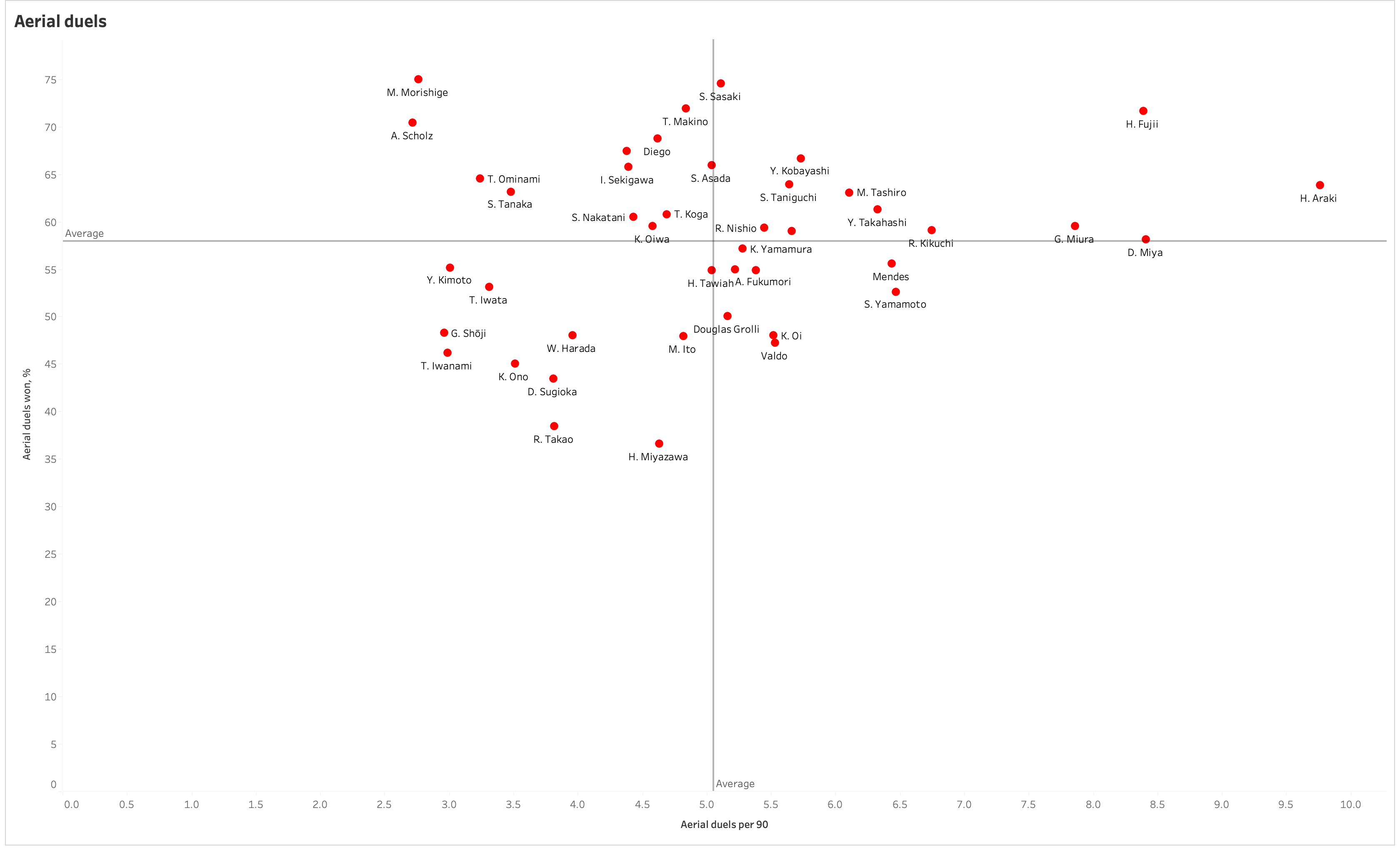 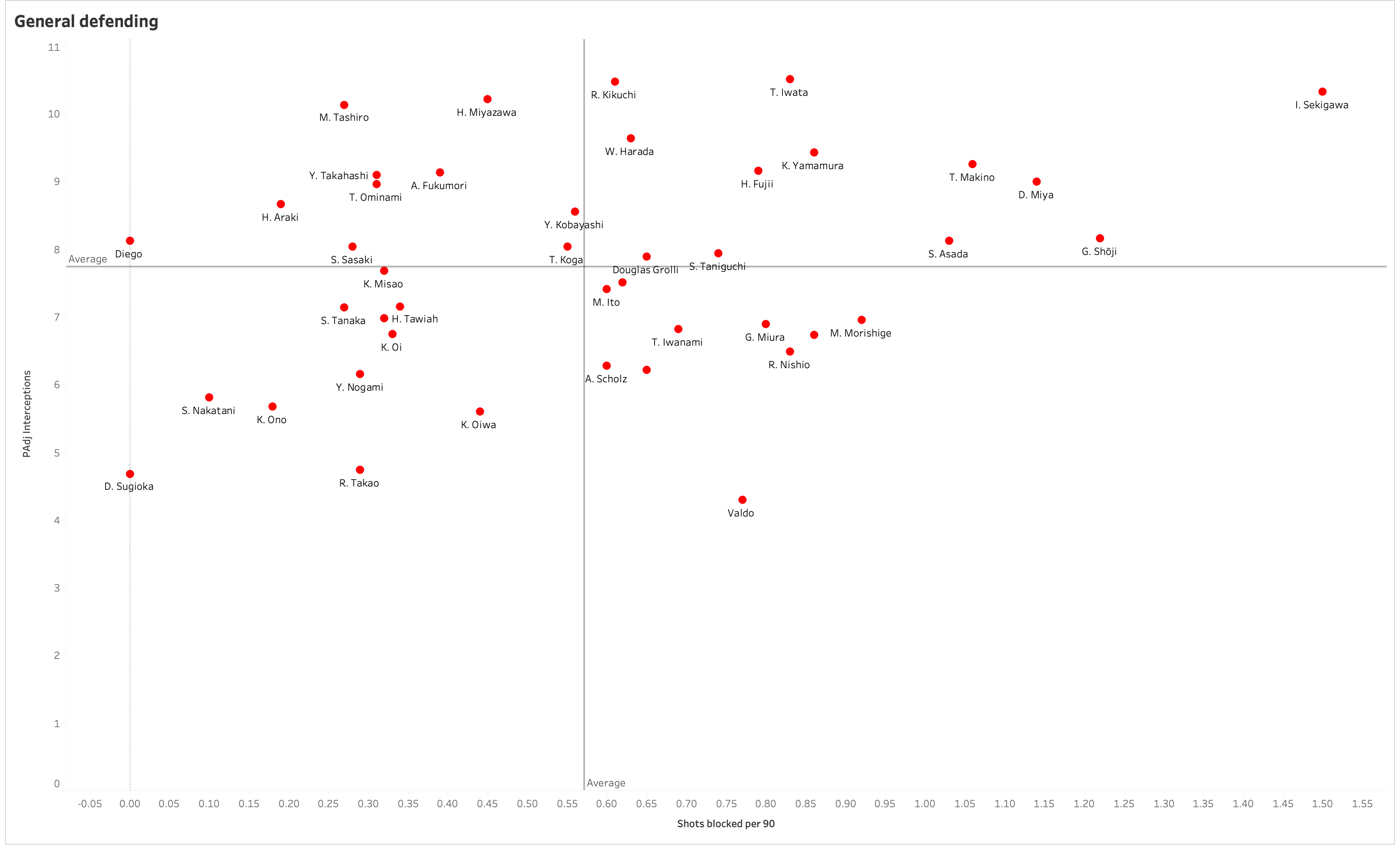 Running all the names that topped the various metrics in the scatter graphs, as well as a few others that scored in the top right quartile on a number, the following players are shortlisted: 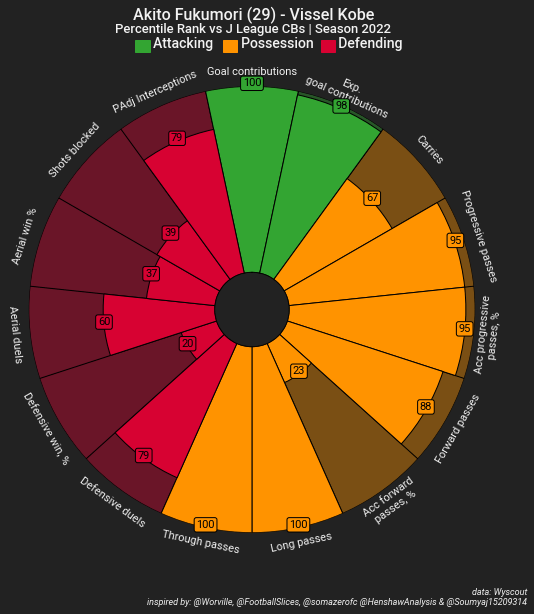 The first player shortlisted is Consadole Sapporo’s Akiro Fukumori who comes through very well on progressive passes, both on volume per 90 and accuracy.

He also scores highly for the number of through passes and forward passes but his accuracy for the latter is below the bottom 25% percentile rank.

He is an above-average ball carrier and looks like he could present a danger in the opposition box.

Other than PAdj Interceptions though, his defensive numbers would be a concern. His volume of long passes, something we would be looking to be quite low for the profile we are searching for here, is also very high.

At 29, he may also not fit the age profile Celtic would be looking for. His possession numbers could still merit video analysis to provide more insight though. 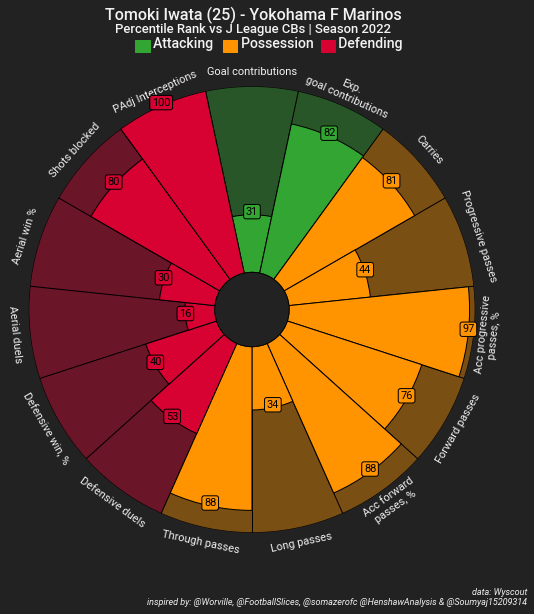 Not as high volume for progressive or forward passes as Fukumori, Iwata does however have very high accuracy rates for both. High rank for carries and through passes, low for long passes, is the exact profile we are looking for possession-wise.

The issue with Iwata would be defensive. His general defending numbers, shots blocked and PAdj interceptions, are good but his dual ones are not. At 5’7’ it is questionable whether he would be able to adapt to the physical nature of the Scottish Premiership.

Again, one that may well still be worth further analysis due to his ball-playing strengths. 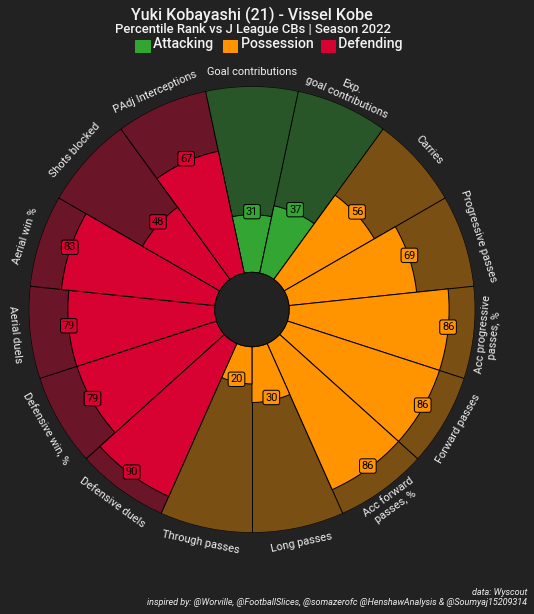 The final player shortlisted is Yuki Kobayashi of Vissel Kobe. One who didn’t come through at the top of the initial scatter graph analysis, but his pizza chart shows the kind of mix we are looking for.

Other than low through passes, Kobayashi has very good numbers for progressive and forward passes with an above-average rank for carries and a low rank for long passes.

Coupled with the strongest defensive stats of the three players shortlisted, and given his age, Kobayashi would certainly warrant further analysis.

Central defenders are arguably one of the most difficult positions to recruit for, given how much performance in the role can be dictated by the style and approach of the team and league they are in.

Even the centre backs that we have identified with strong defensive numbers for the J1 league here may well not be suited to the more physical nature of the Scottish Premiership.

The other issue would be recruiting in what is midseason for them, something Postecoglou has highlighted previously. As evidenced by Celtic’s triple signing of Maeda, Hatate and Ideguchi in January, the winter transfer window may be more suitable timing.

However, in this piece, we have been able to identify centre backs that may warrant further analysis through video scouting.

Celtic will of course be looking at various markets to identify this profile too, but it will be interesting to see whether any players do become future targets for the club, or perhaps for other European sides.