Nico Schlotterbeck (born 1 December 1999) is a German professional footballer who plays as a center-back for Bundesliga club SC Freiburg and the German national team. On 31 July 2020, Schlotterbeck joined Union Berlin on a one-year loan. After the loan finished, he joined SC Freiburg. Now, he is heavily linked to Borussia Dortmund.

For most teams, central defenders are the starting point of their attack and need to be accomplished on the ball both through dribbling and passing. As more teams adopt high-pressing systems, they need to be capable of resisting pressure from the opposition when in deep build-up, mobile enough to cover in behind if the press is broken, and aerially dominant to stop the opposition from playing over the top. Given the variety and difficulty of these tasks, talented center-backs are seemingly always in high demand. As such, it’s no doubt that various clubs are interested in acquiring Freiburg’s 22-year old Nico Schlotterbeck. 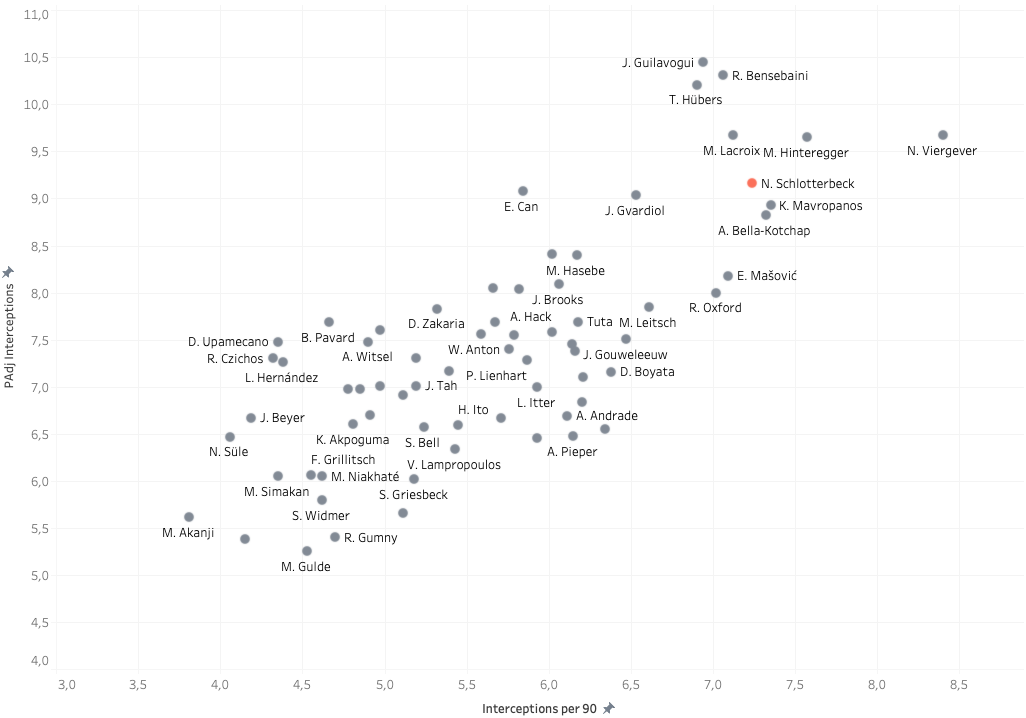 Schlotterbeck is not just a conventional ball-playing center-back: he is unique in how rounded he can be as a creative weapon. Defensively, it can be difficult to assess center-backs with statistics as their defensive output often depends greatly on their team’s relative quality and style.

Schlotterbeck’s performance for statistics such as tackles, dribblers tackled, and interceptions place him in the 90th percentile and above. While a reflection of his quality to a certain degree, such metrics are indicative of his role with Freiburg’s system. 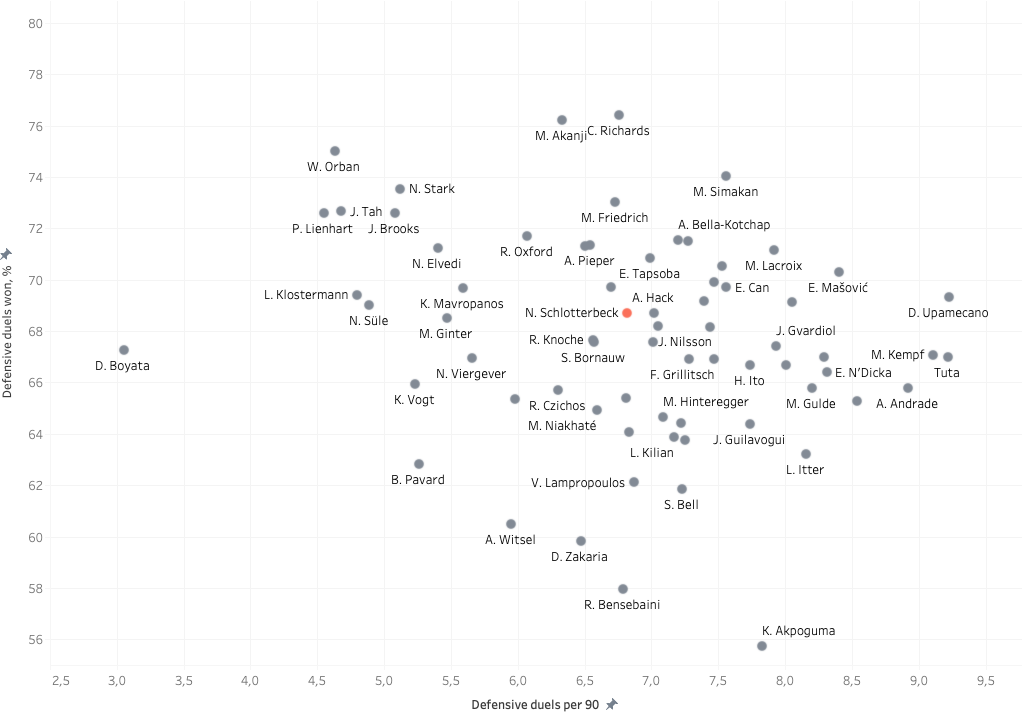 In possession, Schlotterbeck is an effective progressor of the ball both through his carrying and passing, with him ranking 4.50 in progressive carries and 4.10 in progressive passes per 90.

That’s not to say that average possession is the only way to contextualize a player’s performance with the ball. Nevertheless, it shows how the German is putting up relatively impressive numbers despite having fewer opportunities to use the ball than many of his contemporaries. 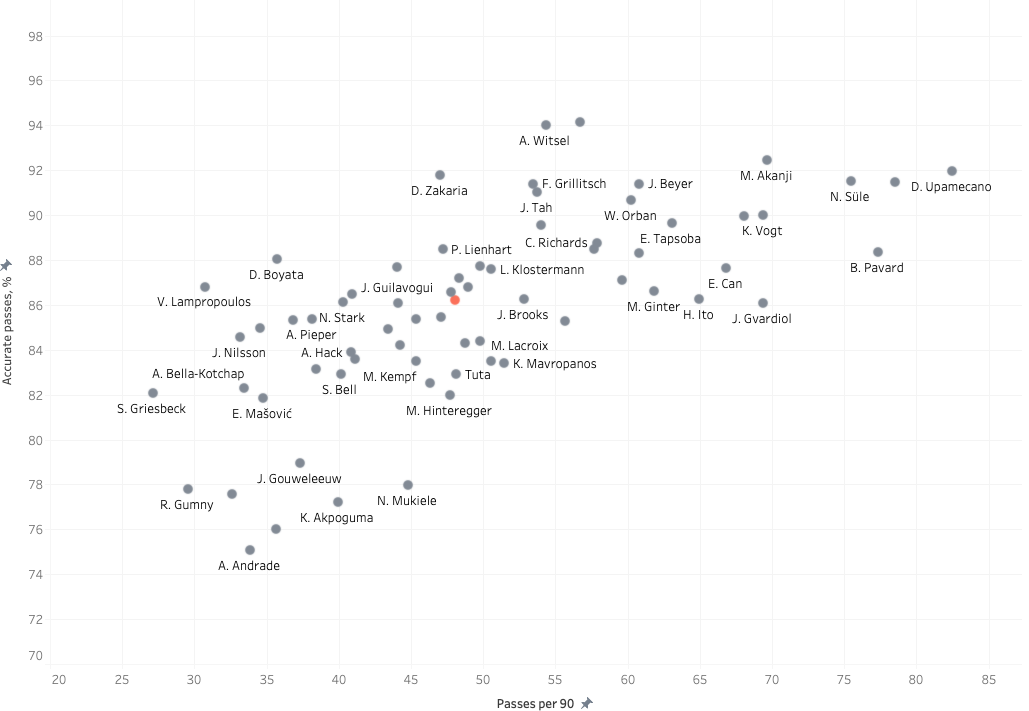 It’s worth noting that Schlotterbeck is his team’s primary outlet for progressing the play and, in some instances, can even be a creative outlet. He is good with progressive passes with him ranking 87 percentile and he ranks 85 percentile in passes which leads the probability of shot or goal. 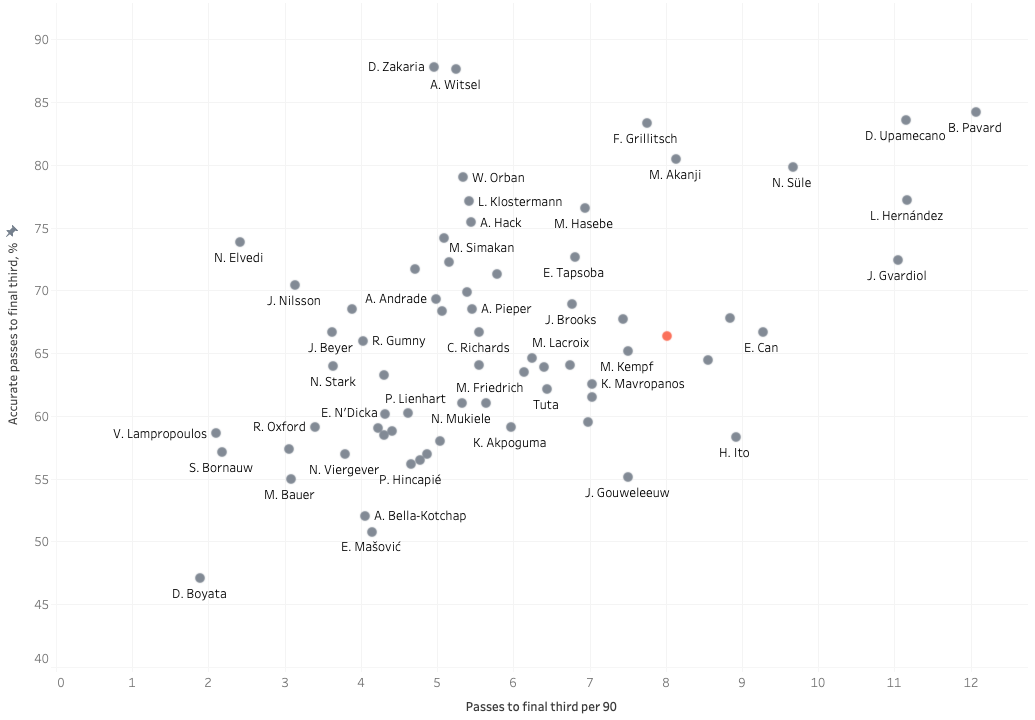 He is a calm presence in the defense with him making a complete pass when under pressure, with 97 percentile.

He is a good dribbler with him having successfully dribbled past opposition players, ranking him at 97 percentile.

It’s why Schlotterbeck ranks above the 95th percentile compared to other center halves in Europe’s top five leagues for statistics such as fouls drawn, shot-creating actions, and nutmegs: unusual metrics for a center-back, but more expected of a team’s primary force for turning stale possession into genuine attacks.

His performances will undoubtedly merit attention from Europe’s elite, and rightly so. Elite center-back prospects are incredibly rare in the modern game due to the immense demands placed on the position. Schlotterbeck has a high ceiling and has the raw attributes to become a great center-half. However, teams will need to be willing to adapt their defensive style to facilitate his aggressive approach.

He may be best suited for teams who play a back-three, which naturally affords the outer center-backs more leverage to step out more. Even then, he would need to become used to playing with more possession and in a higher line.

In sum, it’s unrealistic to assume Schlotterbeck could simply slot into any backline in Europe and replicate his same combination of physical, aggressive defending and superb ball progression immediately. His style is unique, and he would take time to fit within another team’s setup. However, if teams are willing to adapt to his traits and enable Schlotterbeck to adapt to a different defensive setup, he could become one of the best central defenders in European football.