After a seventh-place finish in the Belgian Pro League regular season for KV Mechelen, along with a place in the European playoffs, Wouter Vrancken called time on his four-year spell in charge of the north Belgium side. Vrancken’s time at Mechelen was very successful, with the crowning achievement being winning the Belgium Cup during his first season when Mechelen were still a second division side. Since that cup triumph, Vrancken guided Mechelen to promotion to the Belgian First Division and then got them into the European playoffs.

Now the recently appointed KRC Genk manager, Vrancken is tasked with improving on the side’s eighth-place finish last campaign, and getting them back into the Championship playoffs. This tactical analysis piece will examine Wouter Vrancken’s philosophy, as well as take a deep dive into a few of the strategic implementations that Genk fans can expect from their side next season and beyond.

Role of the goalkeeper during build-up phases

At Mechelen, Wouter Vrancken opted for a style of build-up that was more direct, with Mechelen playing the most long passes in the Belgian Pro League last season. The key to this was Gaëtan Coucke, Mechelen’s goalkeeper who played a vital part in what Vrancken asked his side to do during these phases of play. This section will take a more in-depth look at the vital role that the goalkeeper has in Wouter Vrancken’s system. 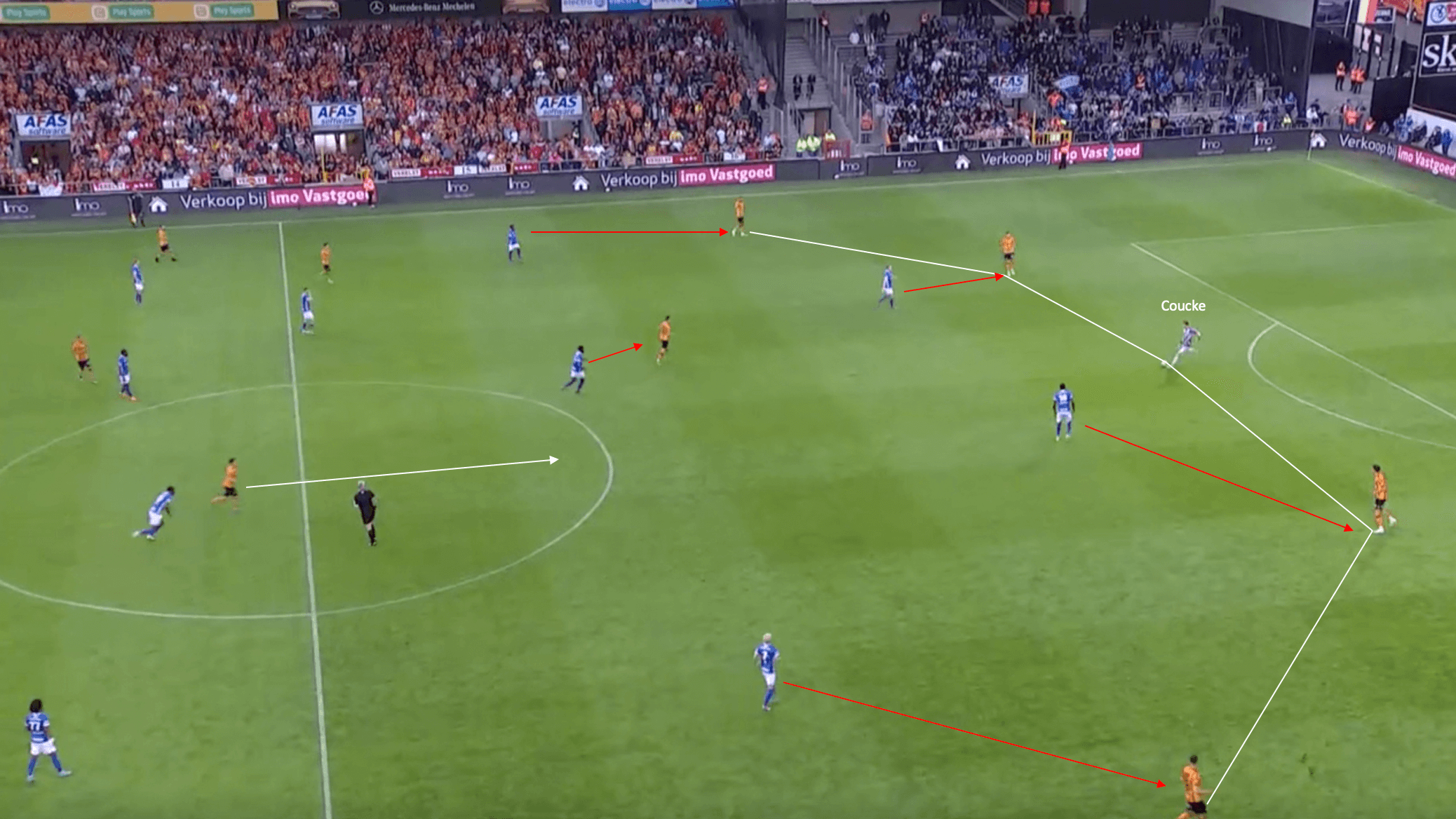 The image above shows the typical shape that Mechelen looked to utilise during the build-up phases. As the ball is played back to Coucke, he moves outside of his penalty box to form a back five, splitting the two centre-backs. As a result of an extra man for Mechelen during this phase of play, it allows space in midfield for one of the forwards to drop into. This is what happens, with Coucke able to spot the forward dropping into midfield, playing the pass to him. This results in a quick-moving attacking phase of play for Mechelen, with a goalscoring chance arising from this sequence of build-up play. 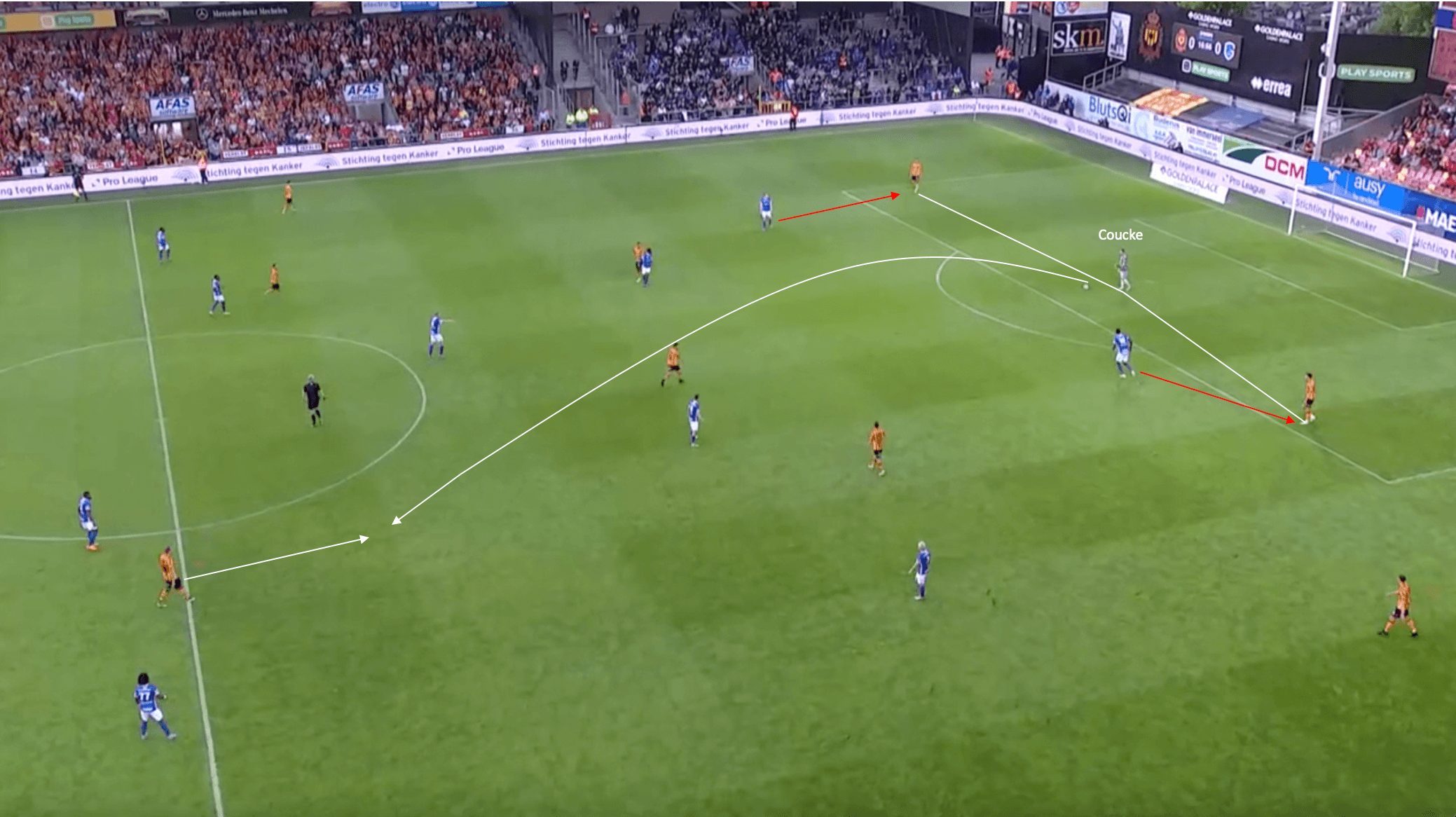 The above shows another example of the role that the goalkeeper plays in Vrancken’s preferred method of a more direct style of build-up play. In this phase, the two centre-backs drop into the box, with Coucke again splitting them. The two furthest advanced players for Genk opt to pressure the centre-backs, which allows Coucke the time to pick out his pass. As a result, he plays the ball into the feet of the forward who is dropping into the vacant space in midfield. This distribution from Coucke allows Mechelen to quickly advance the ball into midfield, as well as bypass the opposition’s press. 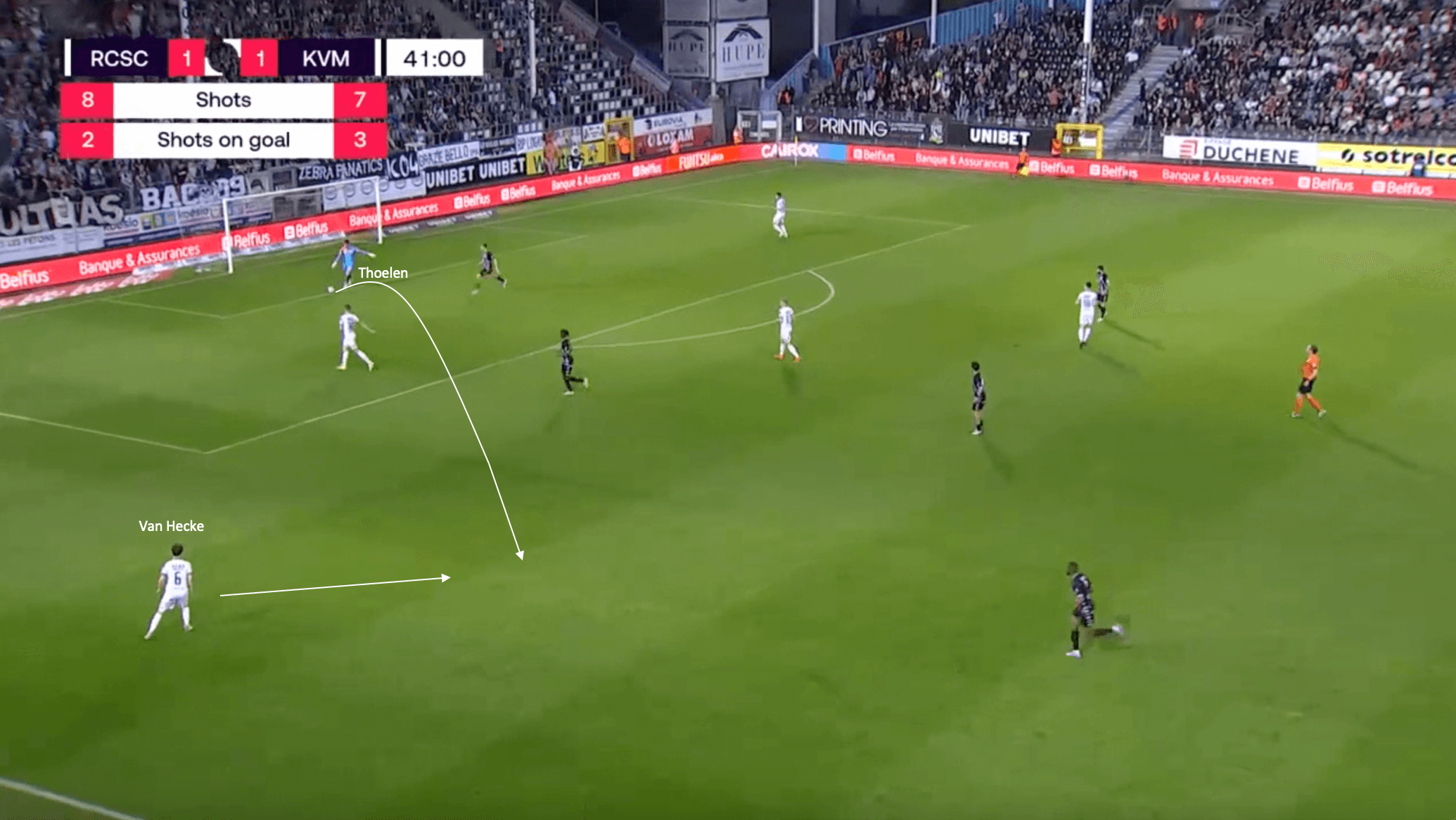 Even when the number one goalkeeper Gaëtan Coucke was not playing, his backup Yannick Thoelen was still able to keep to Vrancken’s principles of being able to utilise his feet well during build-up phases. In this phase of play against Charleroi, Thoelen is being put under pressure from the opposition forward. With the short passing options not being viable, he is able to play a perfectly weighted chip pass into the space between the Charleroi lines, finding van Hecke. This allows the Mechelen build-up to continue, with an eventual shot on target being the end result of this initial distribution from Thoelen.

While the goalkeeper was not always asked to be heavily involved in build-up play with his distribution, it still is a good escape valve that Vrancken liked to have during his time at Mechelen. At Genk, he will have the services of one of the best up and coming goalkeepers in the Belgian Pro League in Maarten Vandevoordt. His talent has already been spotted by RB Leipzig of the Bundesliga, who will be signing Vandevoordt in two seasons’ time when his contract at Genk runs out as a replacement for Peter Gulacsi. With what Vrancken asks of his goalkeepers and their quality of distribution, Vandevoordt will surely improve under his tutelage.

When it comes to the style of attacking play that Wouter Vrancken deploys, it is a high-octane style. In his preferred 4-2-3-1 system, the two wide attacking midfielders are key to how Vrancken wants his side to attack. The wide channels are heavily utilised, with the quick style of attacking play allowing the wide players to have space to cut inside and shoot or cross into the central areas to the players arriving into the box.

To put this into context, Mechelen scored 63 goals this past campaign between the regular season and playoffs. In the left attacking midfield role was Nikola Storm, who contributed 15 goals and 6 assists this season. The right attacking midfield position was usually occupied by one of the former Celtic player Maryan Shved (2 goals & 3 assists), and Geoffry Hairemans (5 goals & 8 assists). This equates to 39 goal contributions between the wide attackers this season or 62% of the goals that Mechelen scored. This section will take a more detailed look at Wouter Vrancken’s emphasis on wide play in attacking moments. 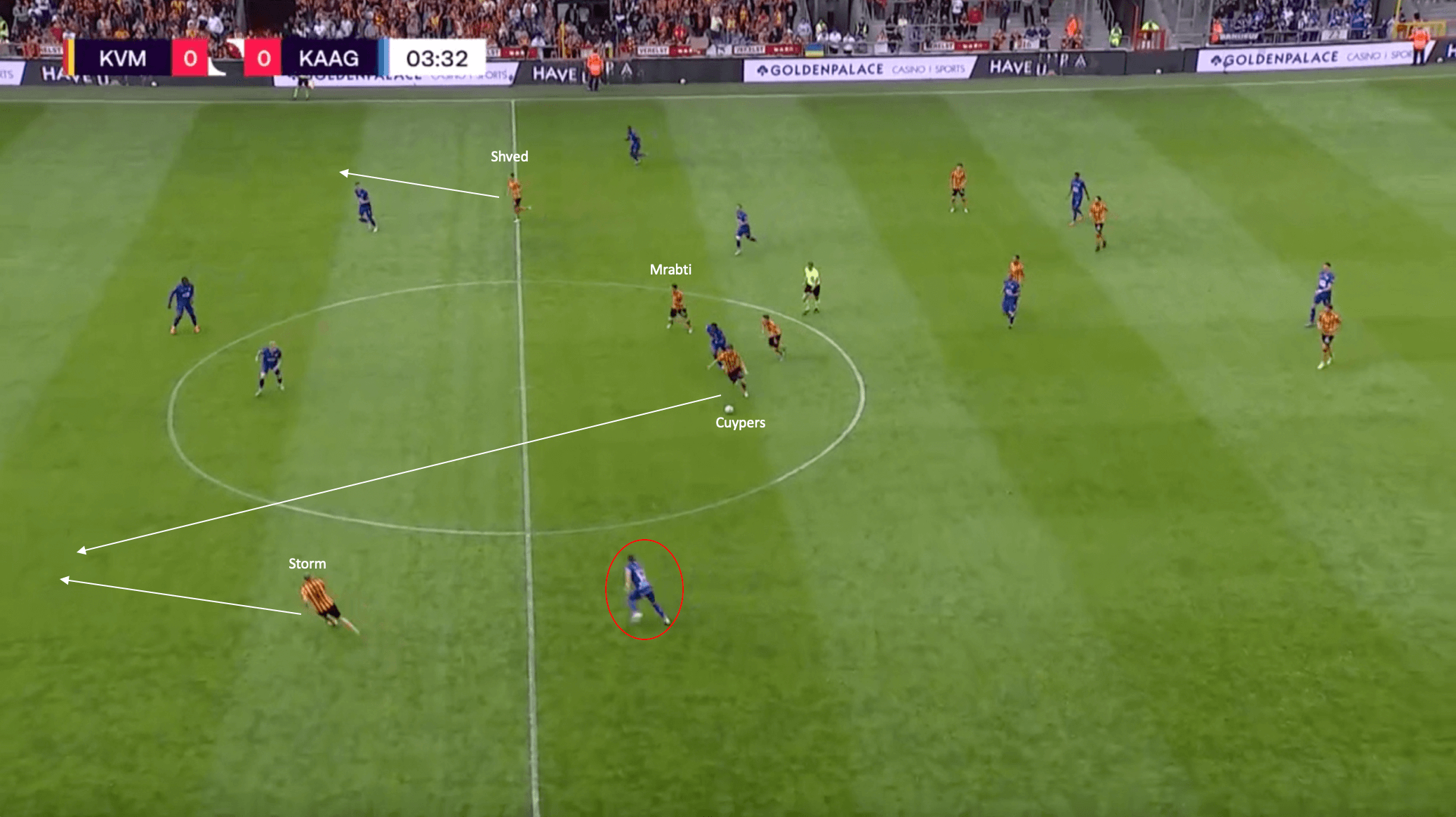 The image above shows an example of how Mechelen exploited the wide channels during Wouter Vrancken’s time in charge at the club. Gent have possession in midfield but are dispossessed by the Mechelen forward Hugo Cuypers who dropped into midfield to pressure the Gent midfielder. The central attacking midfielder Kerim Mrabti is also in this deeper position, which allows the space in the wide channels for the wide attackers.

The opposition centre-backs stay narrow, allowing the wingers to be 1v1 against the wingbacks. Storm gets away from his marker and is behind the defence in the space in the wide channel. Cuypers plays the ball to him, and he is able to drive into the box before cutting inside and attempting a shot. Unfortunately, the shot is weakly hit, allowing the goalkeeper to claim it. 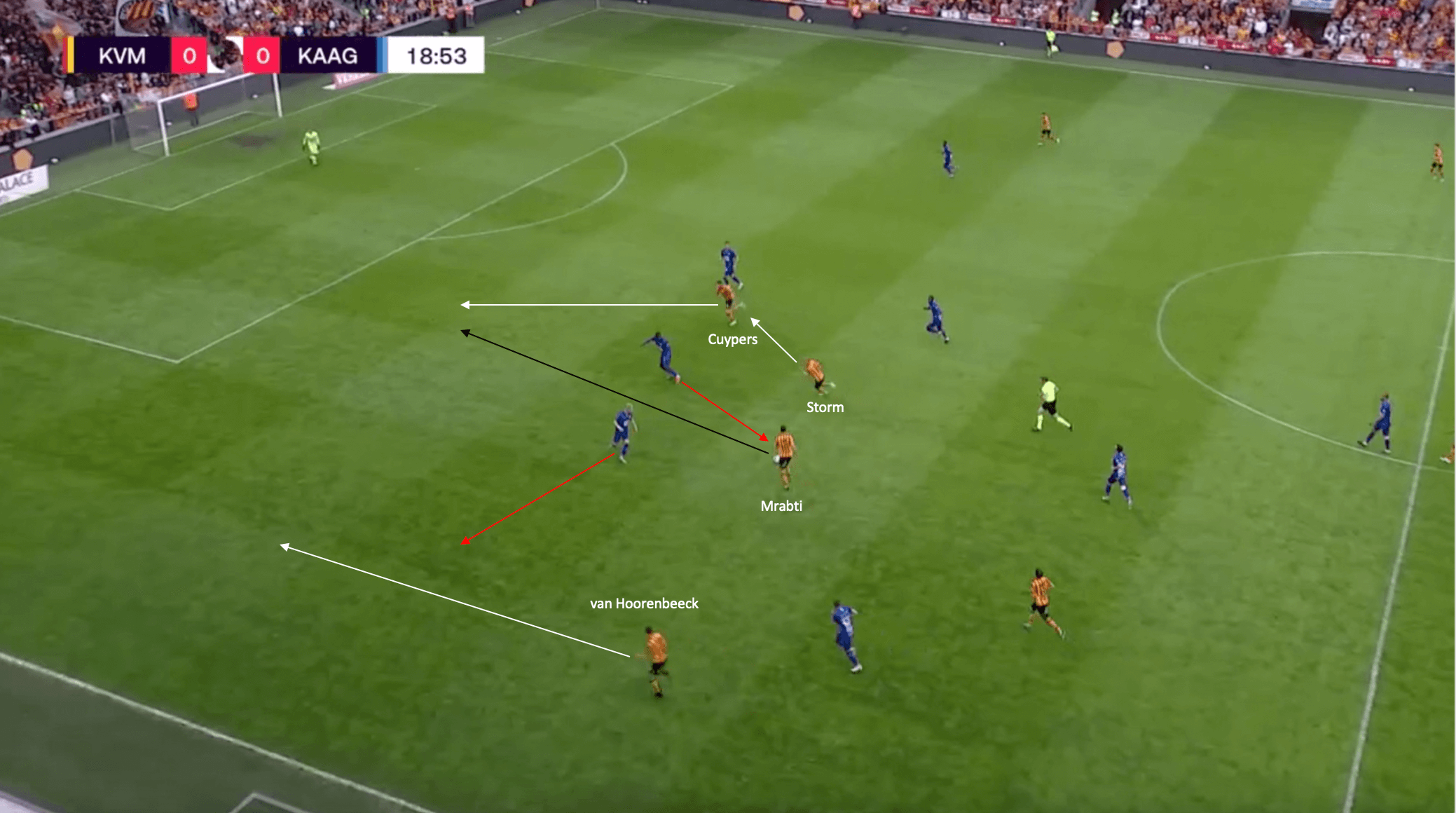 The image above shows another example of the use of the wide channels to progress the ball into the final third. This time though, there is lots of movement between the attackers, with them interchanging positions to catch the opposition defence off guard. Storm has cut inside to a more central position, with the left-back van Hoorenbeeck keeping the width and making a decoy run into the wide channel, attracting the attention of the Gent wing-back. Cuypers and Storm interchange positions as a result, with Cuypers making an in-to-out run into the wide channel, while Storm takes up a central striker position.

The ball is played through to Cuypers, who is unmarked as the centre-back is caught ball watching. Cuypers then drives to the edge of the penalty box before playing a cut back to Storm who has positioned himself near the penalty spot. A corner is the result of this attacking phase for Mechelen, with the movement of the attacking players, as well as an emphasis on exploiting the wide channel being key factors. 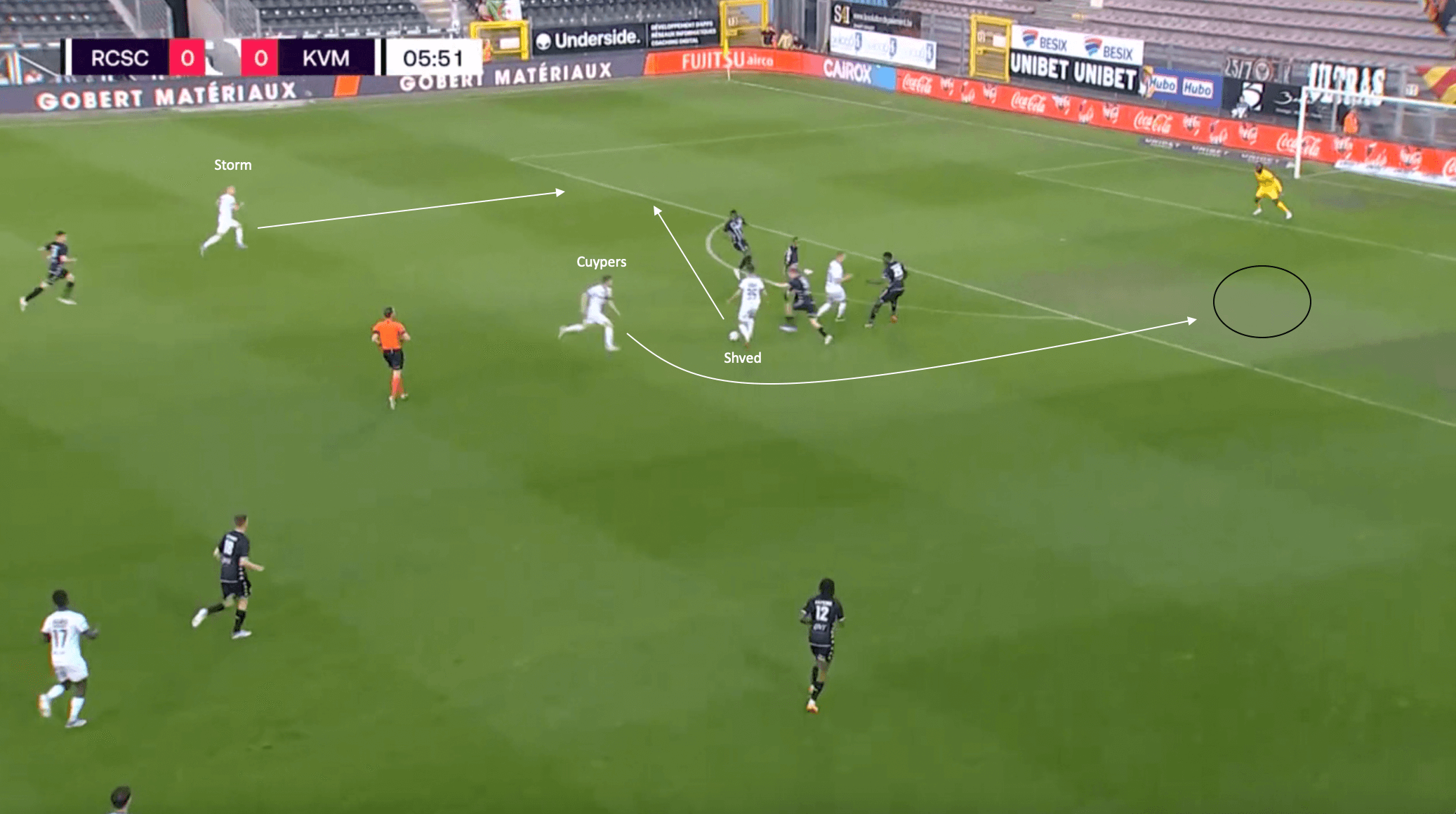 The image above from Mechelen’s recent match against Sporting Charleroi shows another example of the use of wide play to create a goalscoring chance. Maryan Shved received the ball from near the right half-space before cutting inside into a central position. With the Charleroi defenders playing very narrow, the space is left out wide for Nikola Storm to run into. The ball is played to Storm, while at the same time, Hugo Cuypers, who had dropped into a deeper midfield position, makes a run unmarked into the penalty box. The ball is then crossed in by Storm, but unfortunately, a Charleroi defender is able to get his head to it and clear away the danger.

These movements are a key factor in the way that Wouter Vrancken wants his sides to attack, with the crowded central areas opening up the space in the wide channels for his biggest creative threats to get onto the ball. 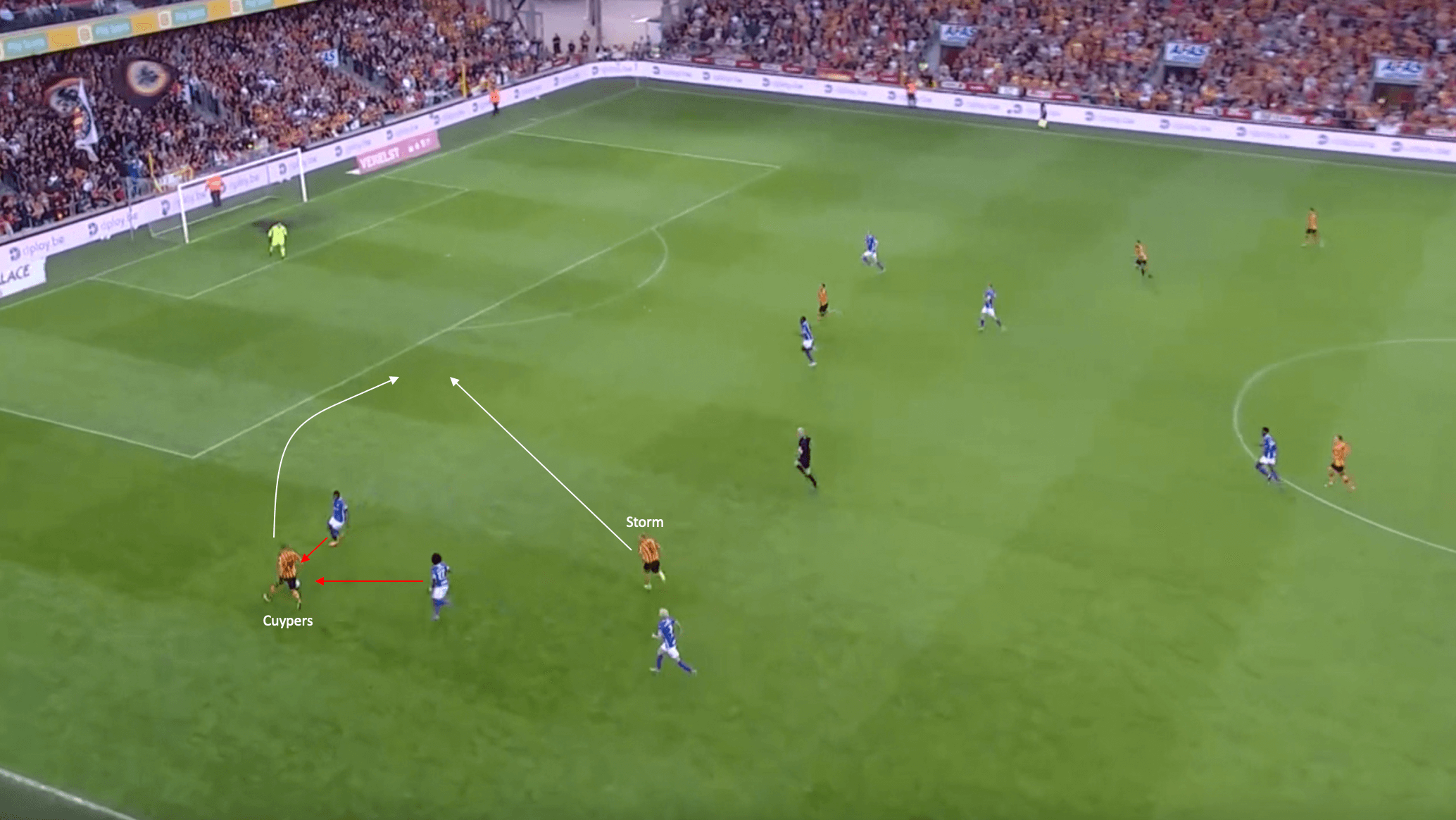 The final example for this section illustrates how the interchanging movements of the forwards from wide positions are able to free up space centrally for Vrancken’s side. In the phase of play above against Genk, Storm initially plays the ball to Cuypers who makes a run from his central position into the wide channel. This run attracts the attention of both the Genk fullback and right centre-back, which allows Storm to make a run into the vacant central position that Cuypers was occupying. As a result, Cuypers plays the pass into Storm’s path, who is able to drive into the box and attempt a shot on goal.

The emphasis on wide play from Vrancken is a huge part of his attacking style of play, and at Genk next season he will have two of the best wide attackers in the Belgian Pro League. In Junya Ito and former Liverpool target Theo Bongonda, Vrancken will have two insanely talented wingers at his disposal. It will be fun to watch how he is able to mould these wide players into his attacking style of play.

A final element that Genk fans should expect to see from their side next season is a more aggressive pressing system. In the Belgian Pro League last season, Mechelen were the fourth-most aggressive pressing side in the division, with a PPDA of 8.35. Most of this Mechelen pressing came from the attacking four, as they looked to put pressure on the opposition backline when they were attempting to build out from the back. This allowed Mechelen to quickly win back possession and counter, or force the opposition to play long where they looked to win the first or second balls. 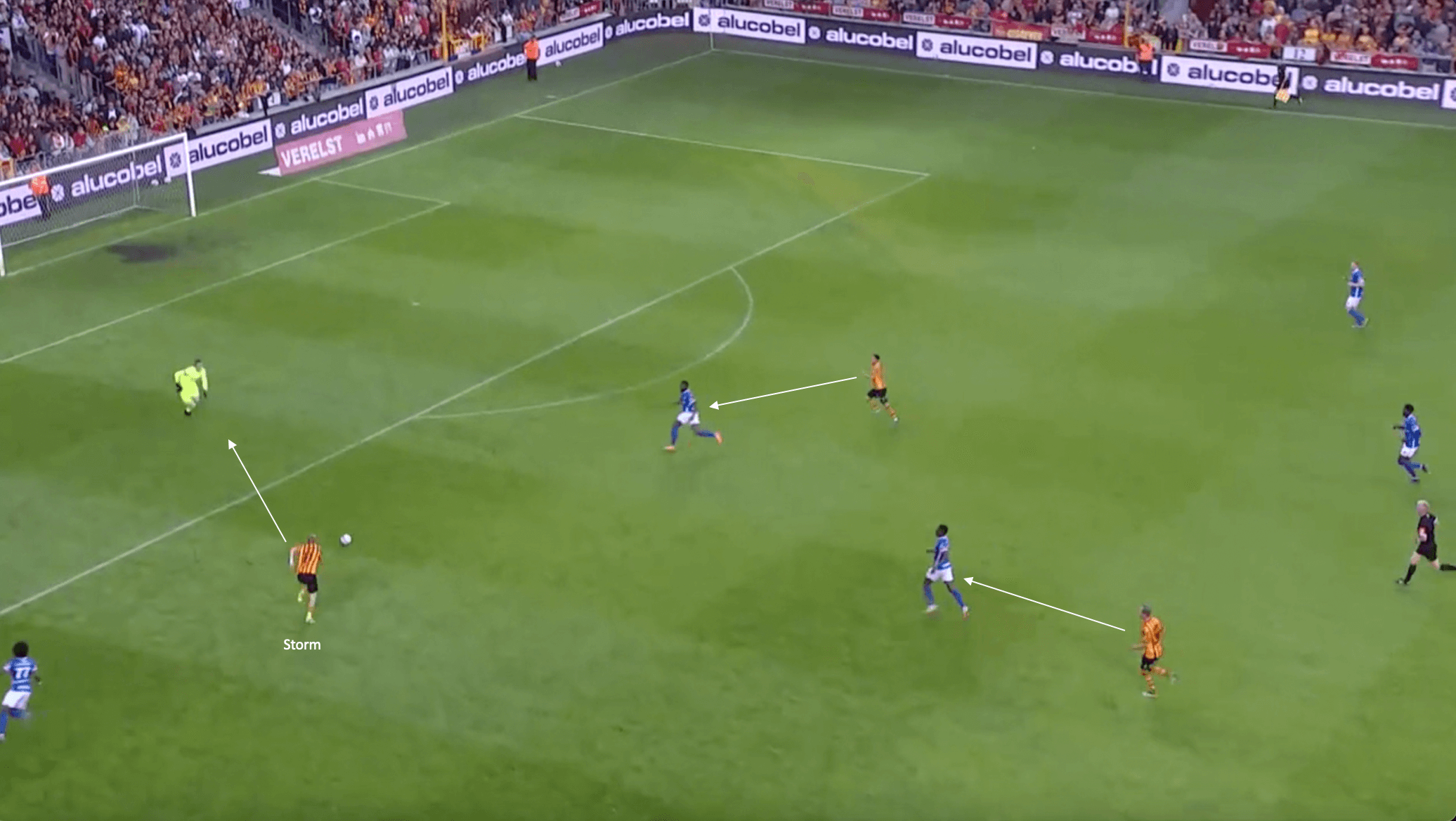 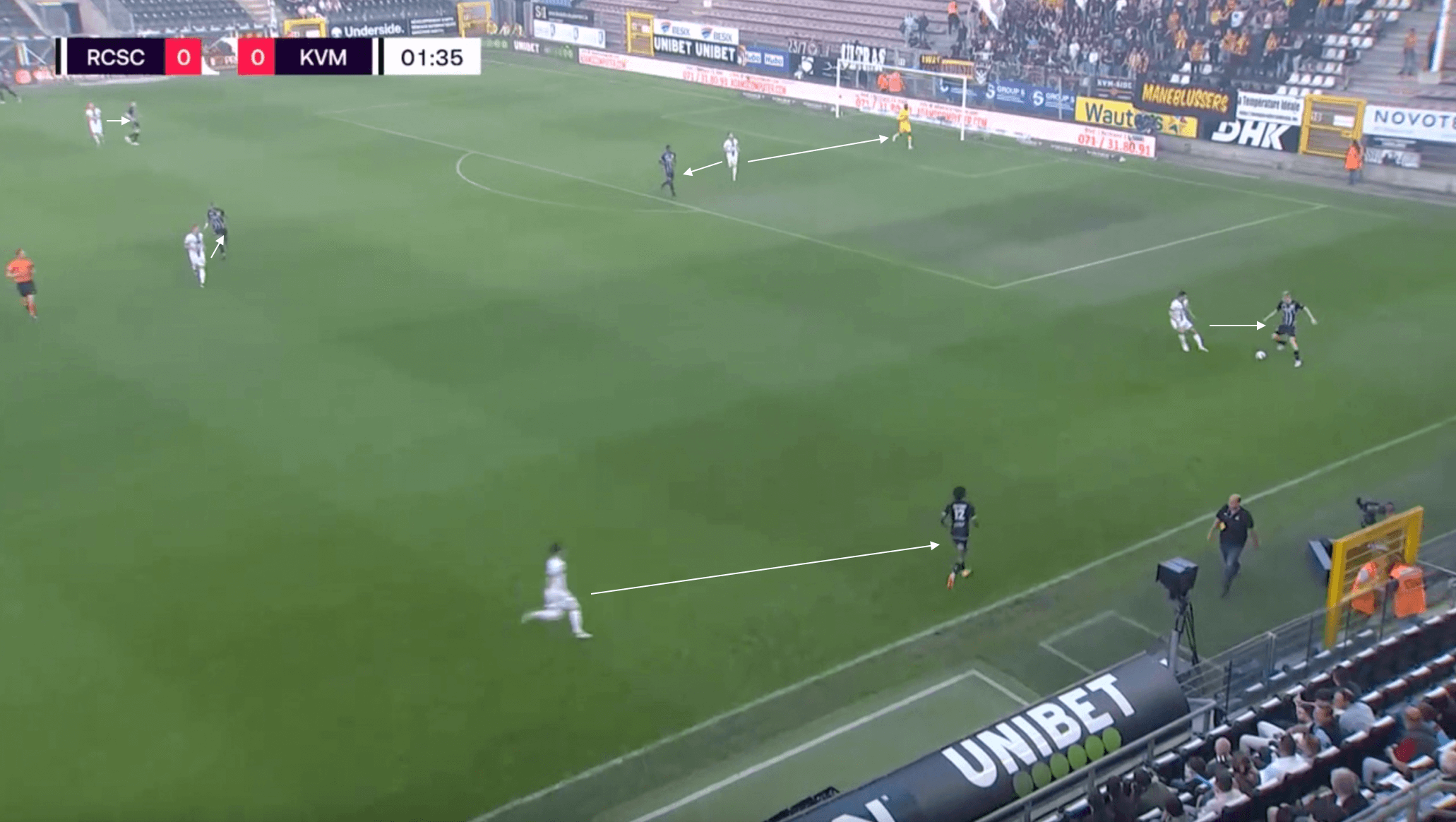 The image above shows another example of the high press that Mechelen looked to engage in. Charleroi are in possession and attempting to build out from the back. Notice how the Mechelen forwards are man-marking the Charleroi defenders in an attempt to force them to play long.

The ball ends up being played short to the wingback on the near touchline, however, he is instantly closed down by the pressing Mechelen midfielder, who does not allow him to turn and progress the ball forward. As a result, the Charleroi player is fouled and a free kick is given, which allows Mechelen to reset defensively. 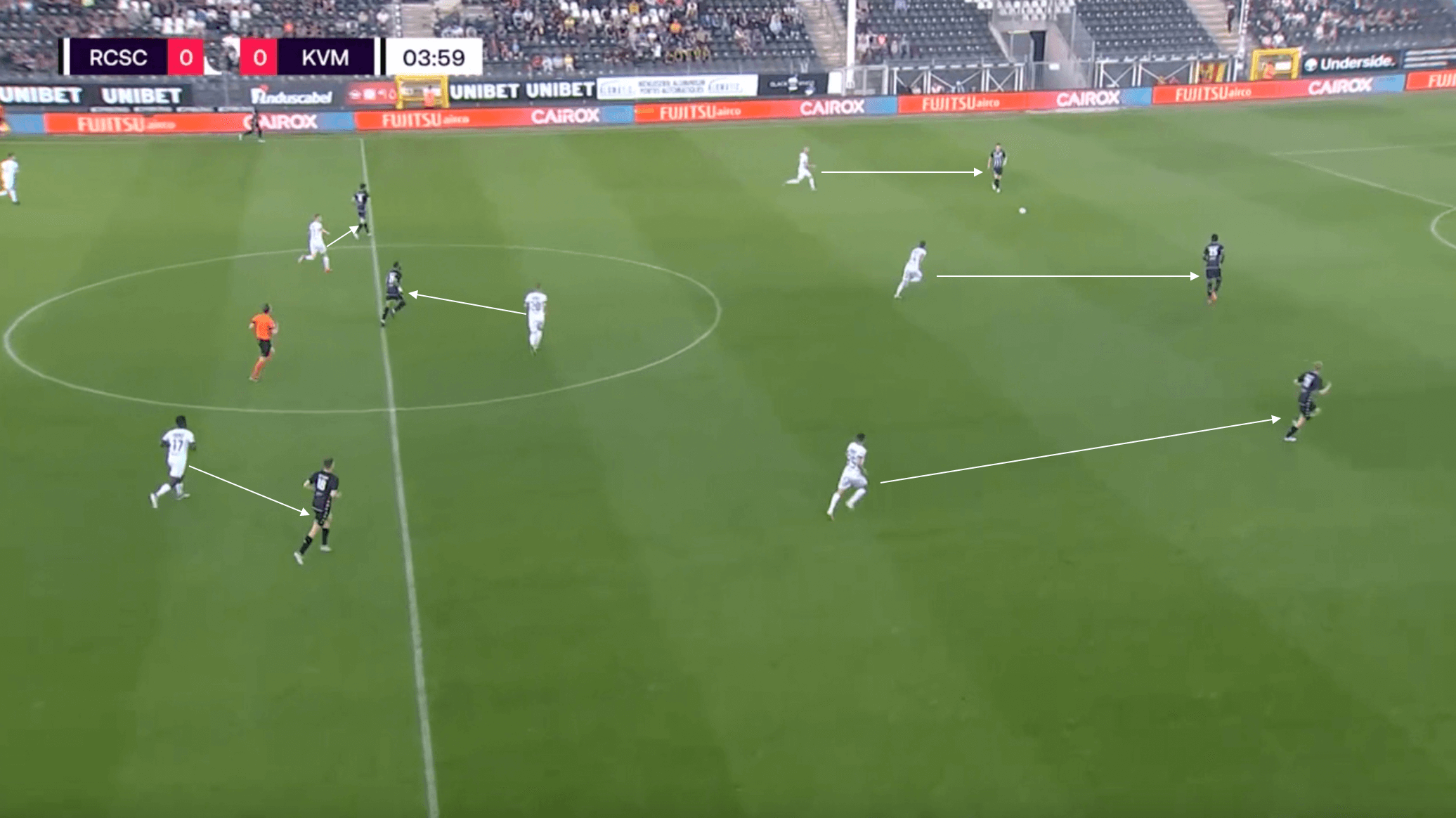 The final example for this section, once again, demonstrates the man-marking pressing principles that Vrancken deployed during his time in charge of Mechelen. The press is triggered when the left-sided centre-back plays the ball across to the right-sided one. The three forwards put pressure on the defenders, with the Charleroi midfielders all getting closely marked as well to prevent a forward pass. This means that the only option for the Charleroi defender is to play the ball back to the goalkeeper, who after being put under pressure by the press, is forced to play the ball long.

The pressing principles deployed by Wouter Vrancken are another key reason why he was so successful during his four-year tenure in charge of Mechelen. These same principles will very likely be deployed at Genk next season, with him hoping for the same amount of success.

This tactics and analysis piece has been able to give Genk fans a quick but detailed look at what they should expect from their side next season under the tutelage of Wouter Vrancken. After a disappointing season for Genk last season, where they finished in eighth place and just made the European playoffs, a top-four finish should be the expectation for Vrancken in his first season in charge.