Ralf Rangnick took the Austria job following his departure from Manchester United. The German took charge of his first few games in this round of Nations League fixtures. Austria got off to a winning start, battering Croatia 3-0. This result was followed by a 2-1 loss to Denmark and a 1-1 draw with World Champions, France.

This tactical analysis will look at how Ralf Rangnick wants his team to play. This analysis will cover the tactics used by the German and how he likes to set his side up.

Rangnick has used a number of formations in his early stages as Austria’s boss. 5-3-2, 4-2-3-1 and 4-4-2 are the main ones which have been utilised. Each formation varies slightly in the way the team plays in possession. However, what is noticeable are some key principles that the 63-year-old has instilled into his team already.

Firstly, Rangnick wants his team to make the pitch as big as possible. Encouraging his players, especially the fullbacks, to go wide allows for Austria to create space for the midfielders to receive the ball. The Austria midfielders can now drop deep into the space vacated and receive the ball from the defenders or goalkeeper.

In possession, Austria like to build up from deep and utilise their quality in the back line and also in the midfield. Their side is stacked with top-class players such as Bayern Munich midfielder Marcel Sabitzer. Sabitzer provides excellent experience and playing ability which Austria utilises.

Austria are patient in building up and are good at playing through a press. They use quick one and two-touch passing to break through the opposition’s press and then they can build through the midfield. The ability of the Austrian defenders on the ball is very high, something which Ralf Rangnick will value greatly. 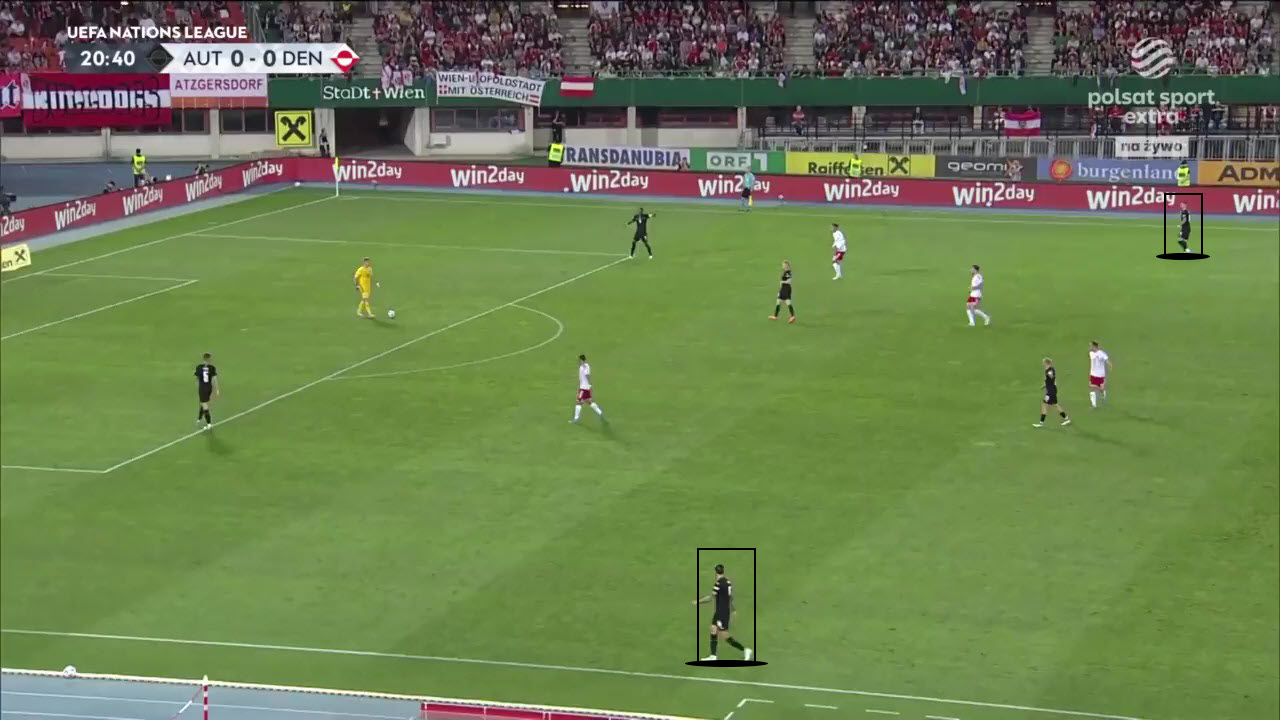 Real Madrid defender, David Alaba is a key member of the Austrian national team. His versatility has been used well by previous managers and he has played a number of roles for his country such as centre midfield and left-winger. Under Rangnick he has been deployed as a central defender, where he plays for his club. Alaba’s ability on the ball is world-class and from centre back he can dictate play and use his long-range passing.

His teammates know to make forwards runs he has when he has time on the ball as he loves to play the killer pass. Below is an example of how Alaba has progressed Austria into a dangerous attacking position where they can now attack the box. On a number of occasions, Austria attackers did not make the correct run and the pass either when astray or Alaba decided not to play it. When the pass is on and it is executed, it becomes a serious problem for the opposition.

Moving on to the final third of the pitch, it is clear Rangnick has set his side up with some key attacking principles. When reaching the final third Austria look to create chances via cutbacks. This is done by clever movement in the box and also overlaps out wide.

The Austrian players remain composed when faced with the decision of who to pass the ball to. The run to the goal mouth usually drags opposition defenders deep and Austria always have a player who delays their run to arrive late into the space left behind. This is something that was repeated on a number of occasions and, clearly, Rangnick has tactically instructed his side to do this.

Below is the goal scored against France in a 1-1 draw which came from a cut-back situation. In this instance, the ball was played across the goal-mouth before being tapped in by EFL Championship forward, Andreas Weimann. 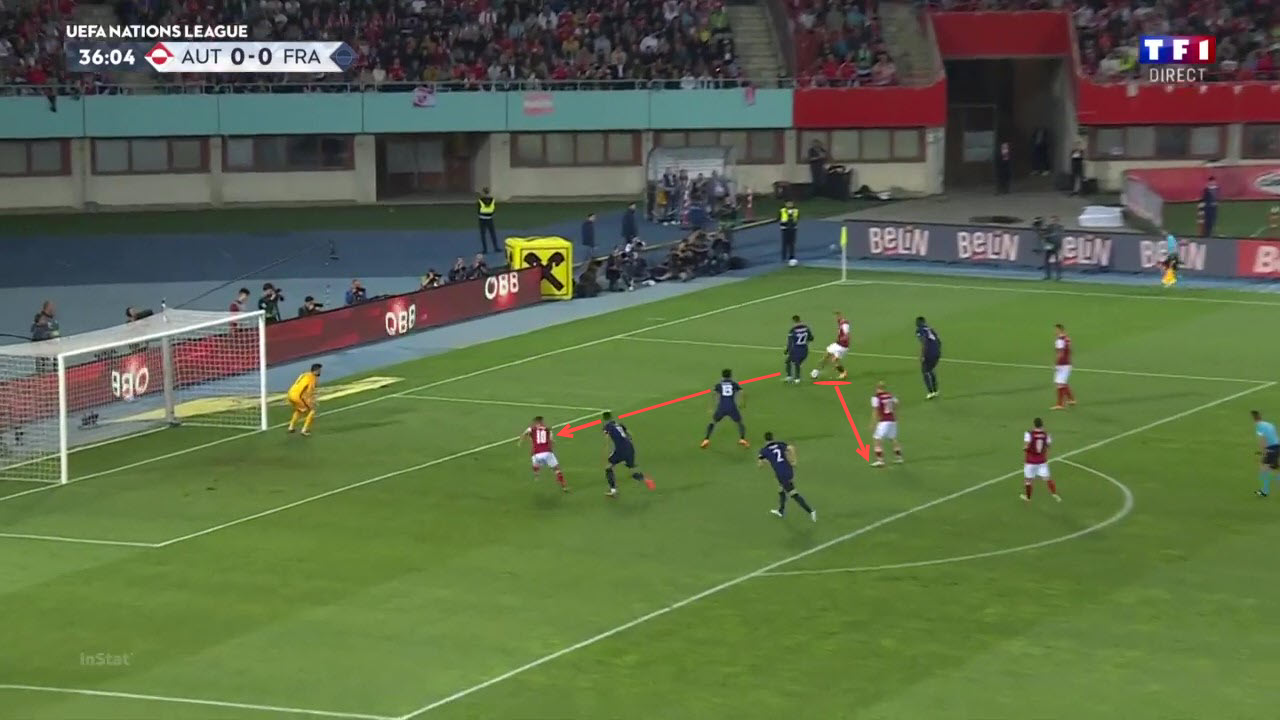 Rangnick wants his side to be aggressive out of possession and engage in pressing the opposition high up the pitch. The use of two central strikers allows for a press to be conducted easier. Austrian players encourage each other to continue the press to try and catch the opposition out. Recently, against Denmark, Austria won the ball back high up the pitch following a press and scored from it.

The former Manchester United boss has set his team up to press high and cause disruption to the opposition whilst they try to build up. The Austrian side needs to ensure that all players buy into the press and back their attacking teammates up otherwise the press will be weak and easily broken down. Reading of the game is vital and as seen below teammates must help each other by instructing them on when to press. 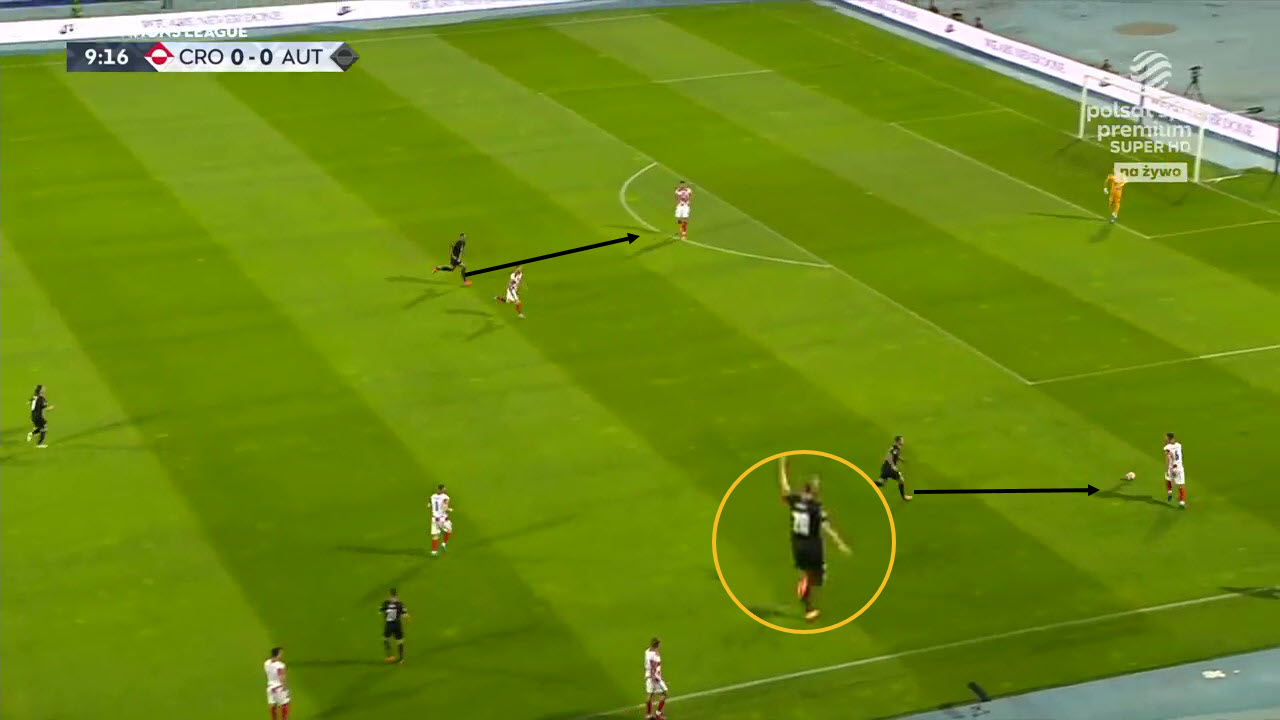 When the first phase of the press is bypassed, Austria drop into a mid-block. The midblock is very effective for Austria as they take a well-structured shape and maintain it. Below is an example of how Austria set up in a 5-3-2 and a 4-4-2. Being defensively disciplined is something which is required, especially in international football where the majority of games are knockout, so margins are fine.

By deploying a midblock, Austria enable themselves to still be aggressive when the ball is played into tight areas. There are enough players around to press the opposition when they break down the mid-block. The aggressive midfield often wins Austria the ball back by either pressing or intercepting a pass. The midblock ensures that Austria are not to deep as they would be in a low block. This means they cannot be aggressive due to the risk of giving a dangerous foul away being much lower as they are set up in the middle section of the pitch. 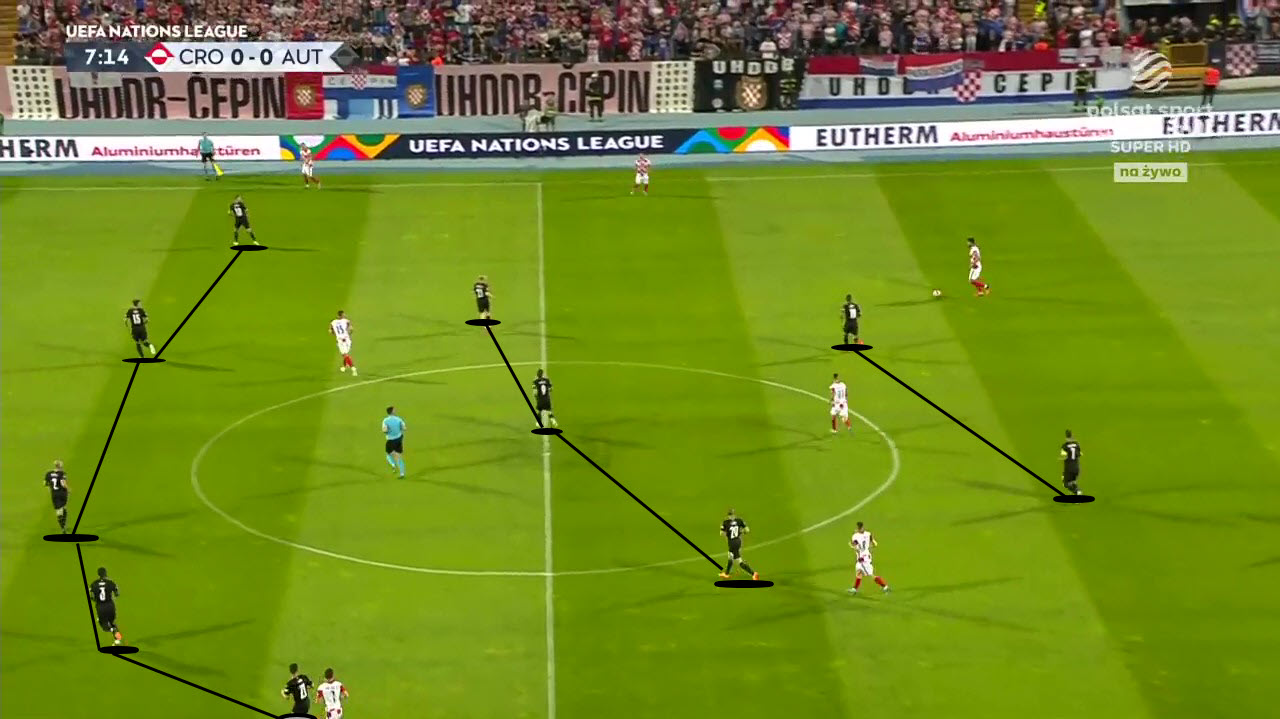 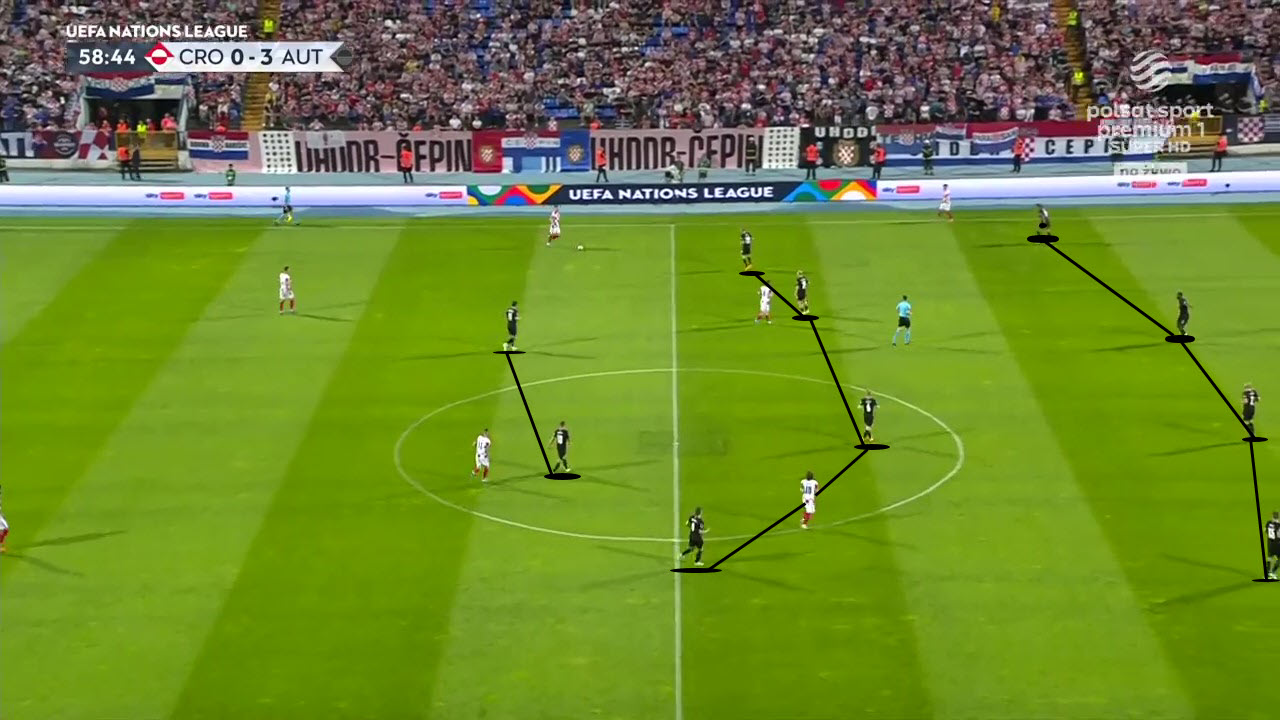 An example of this aggressive stance is when the ball is played into the opposition’s striker. A ball into the central area is dangerous so Austria quickly get bodies around the ball. By doing this they nullify any opportunity for the striker to turn or pass the ball forwards. The midblock is useful for this as the gap between defence and midfield is small enough to quickly react to situations like these. 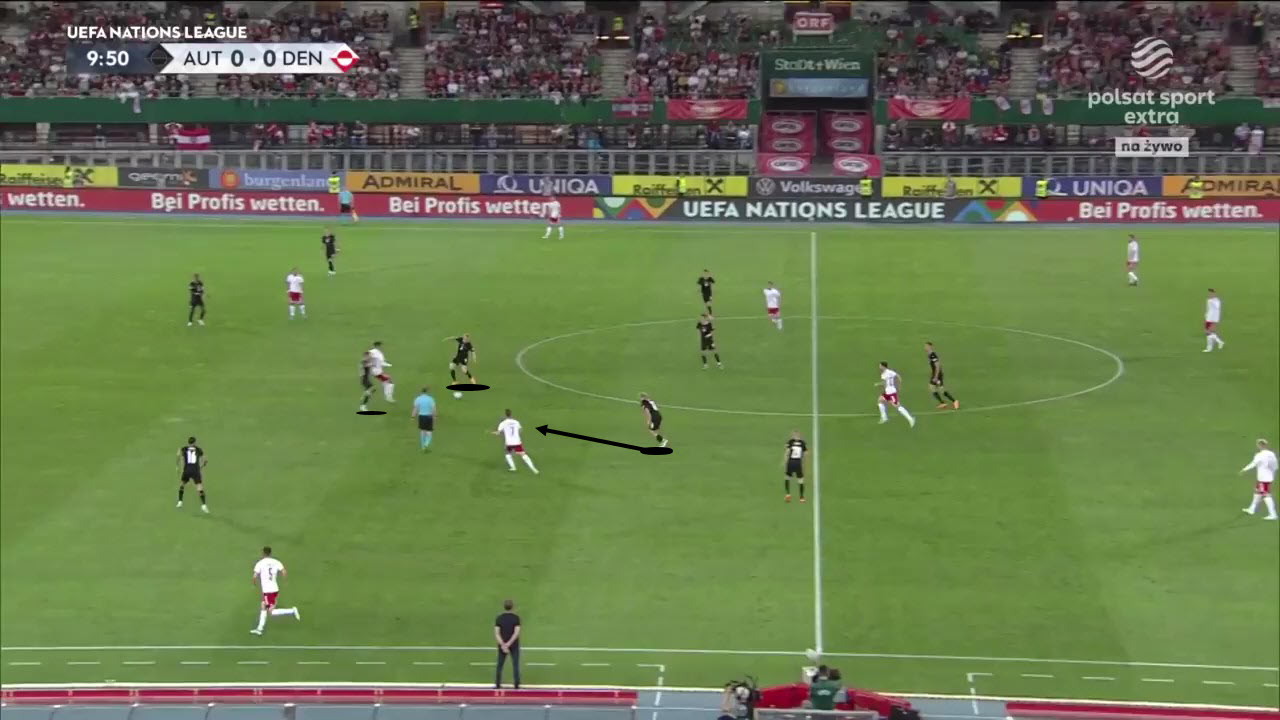 When transitioning to attack Austria, like most teams, look to break quickly and counterattack. By having willing forwards runners Austria are able to exploit the space in behind following a transition. Their use of 2 central strikers allows them to have options available for a counterattack.

The player on the ball looks to pass quickly and limit his time dribbling. This is something that has been introduced and it makes attacks quicker as ultimately the ball moves faster than any player. By doing this Austria are able to cause damage to the opposition who are usually out of shape following a turnover in possession. Rangnick wants his team to be direct but also calculated in doing so. 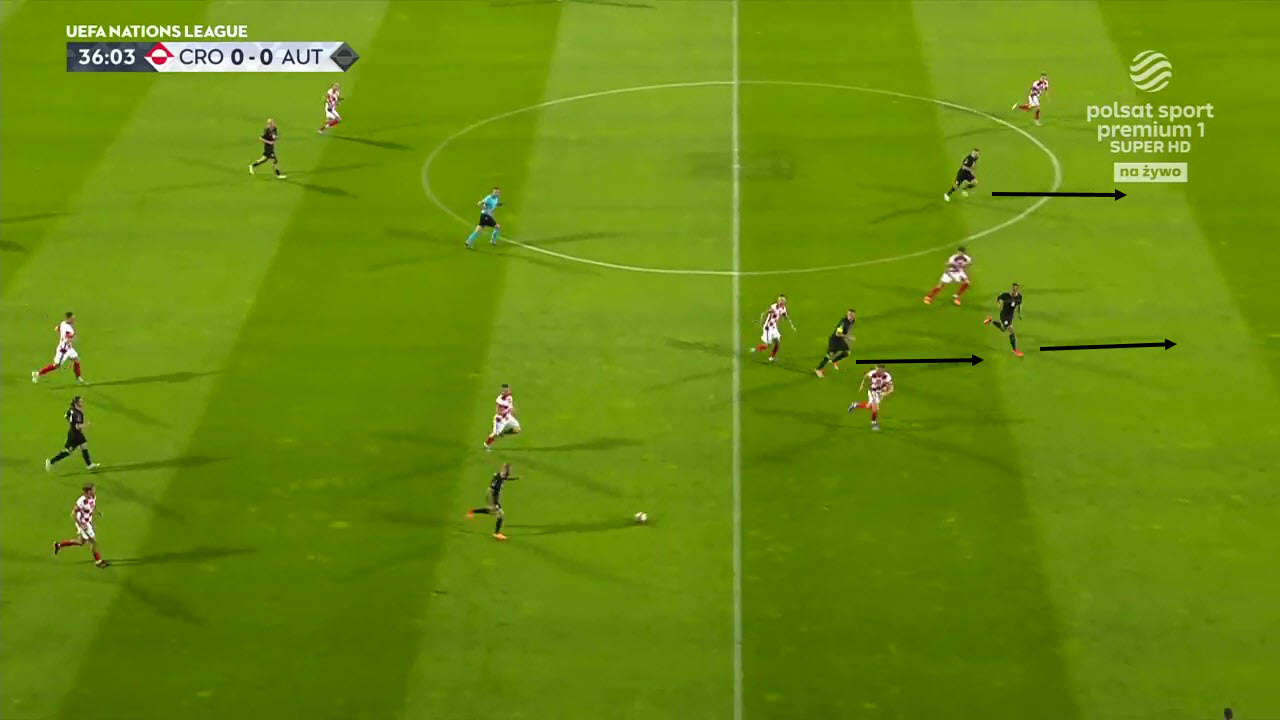 Ralf Rangnick is seen as revolutionary for the way his teams play in defensive transitions. The term ‘gegenpressing’ is fixed with the German who introduced the world to this style of play. Put simply gegenpressing is counter-pressing, something which is now seen synonymously with Jurgen Klopp at Liverpool. To do this involves a high level of fitness but also commitment, something which was perhaps lacking at Manchester United.

This style of play carries a great risk and sometimes the opposition can play out of this counter-press which could lead to Austria being out of shape and also being outnumbered. This way of transitioning is seen as ‘high risk, high reward’ where the risk of being caught out is worth the risk of regaining the ball in a favourable position. 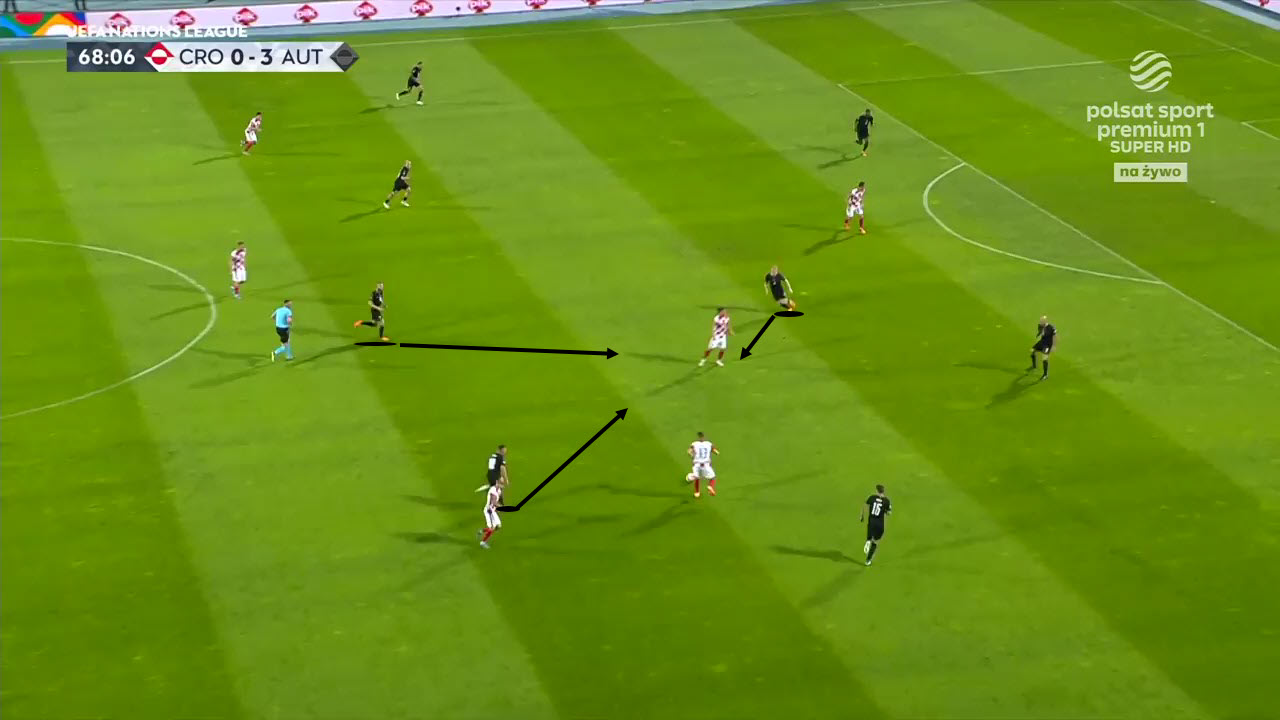 Having failed to qualify for this year’s World Cup in Qatar, Austria can begin to prepare for the Euros in 2024. Rangnick will be able to implement his philosophy and play style that suits Austria by then and with the development of younger players such as Christoph Baumgartner, Xaver Schlager and Kevin Danso, Austria should have a new foundation to build upon.

It is still early days into Rangnick’s reign in charge of Austria, but the early signs are promising. His side is beginning to adapt to a new way of playing and can look forward to the next round of Nations League matches in September. Rangnick has already been praised by members of the Austrian national team and he will look to leave his mark on international football.